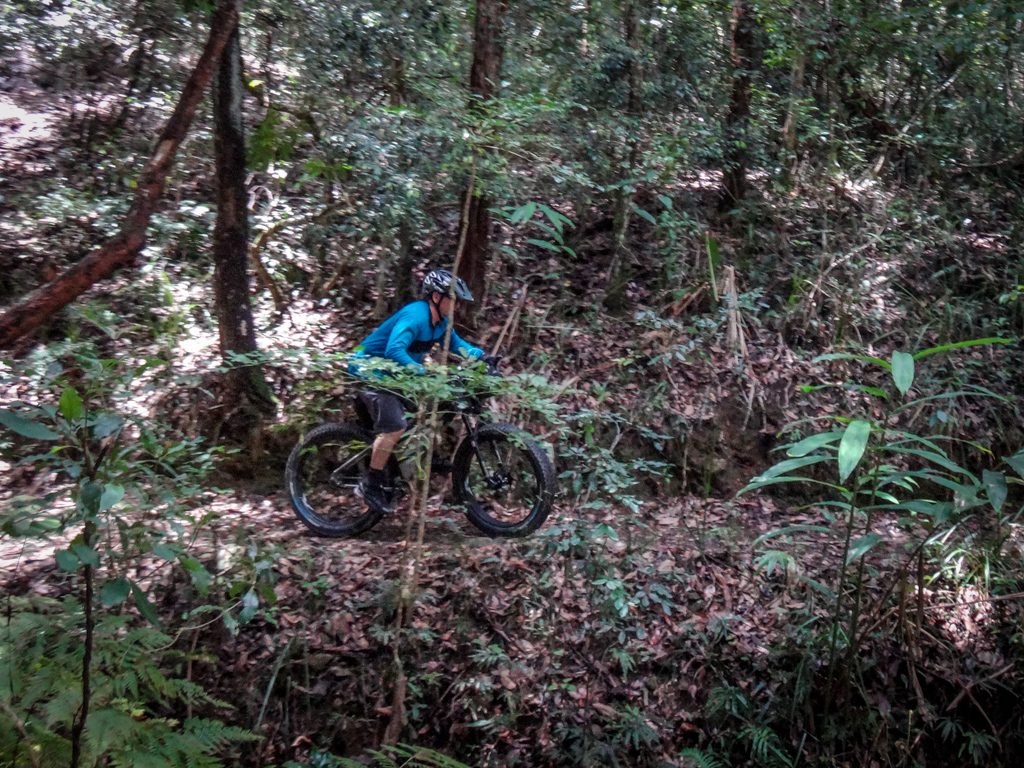 Today’s plan was to ride a large loop around the north side of Brisbane, up into the D’Aguilar Range, through the city, and then back via the mangroves of the Boondall wetlands.  Although I’ve done it before, I forgot how difficult this ride is. 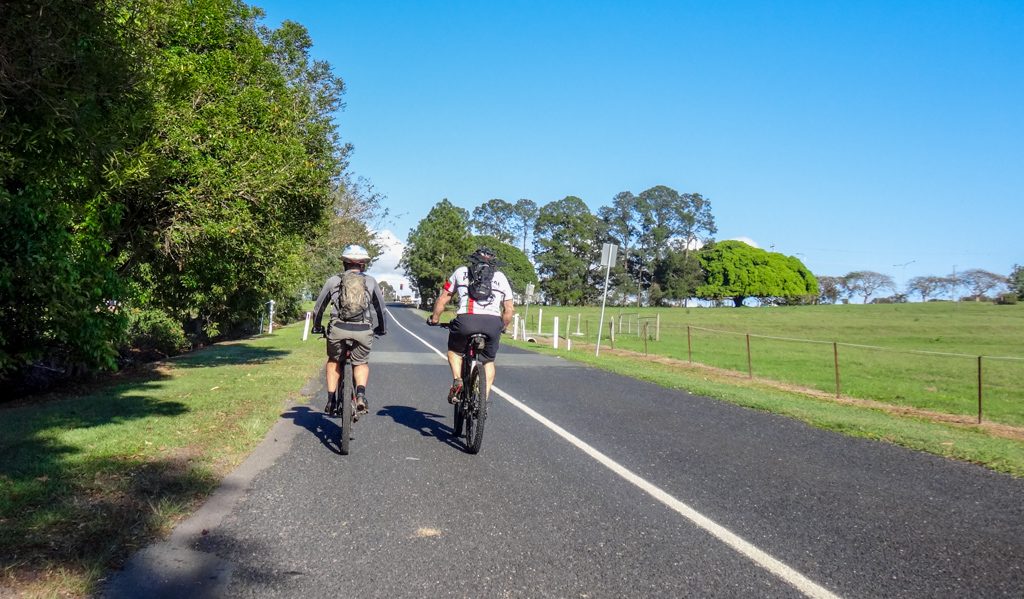 Every October, Darb takes part in the Great Cycle Challenge to raise money in support of research to develop better treatments and find a cure for childhood cancer.   And every October, we agree to do some long Saturday rides with him to help him reach his goals.  This year his aim was to ride 1,200km during the month, and raise $2,000.

We thought a 120km ride today would help get him some of the way towards that target. 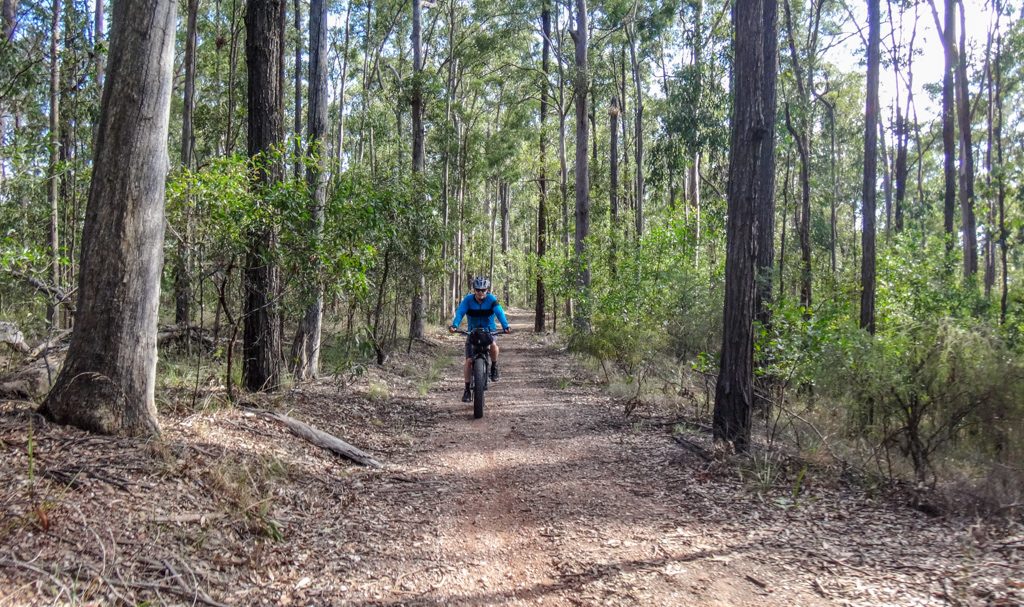 We tried to make the course as “off-road” as possible, and started the day with a quick roll through Bunyaville. 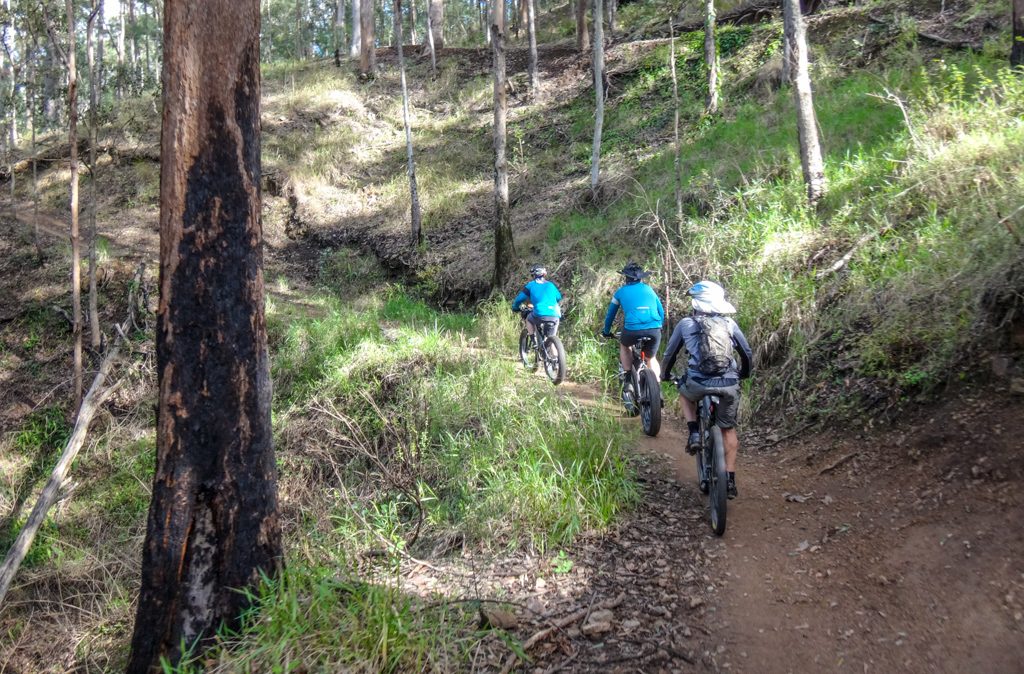 From there was rode over the hill to the trails at Ironbark (Samford Regional Park). 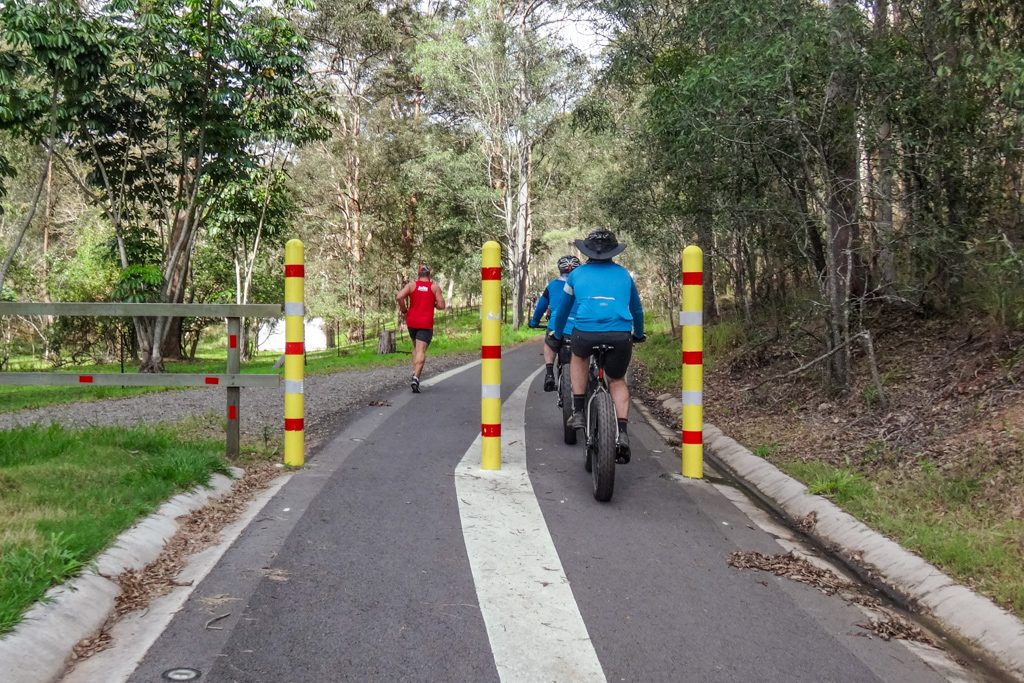 We then continued west along the Lanita Road Rail Trail. 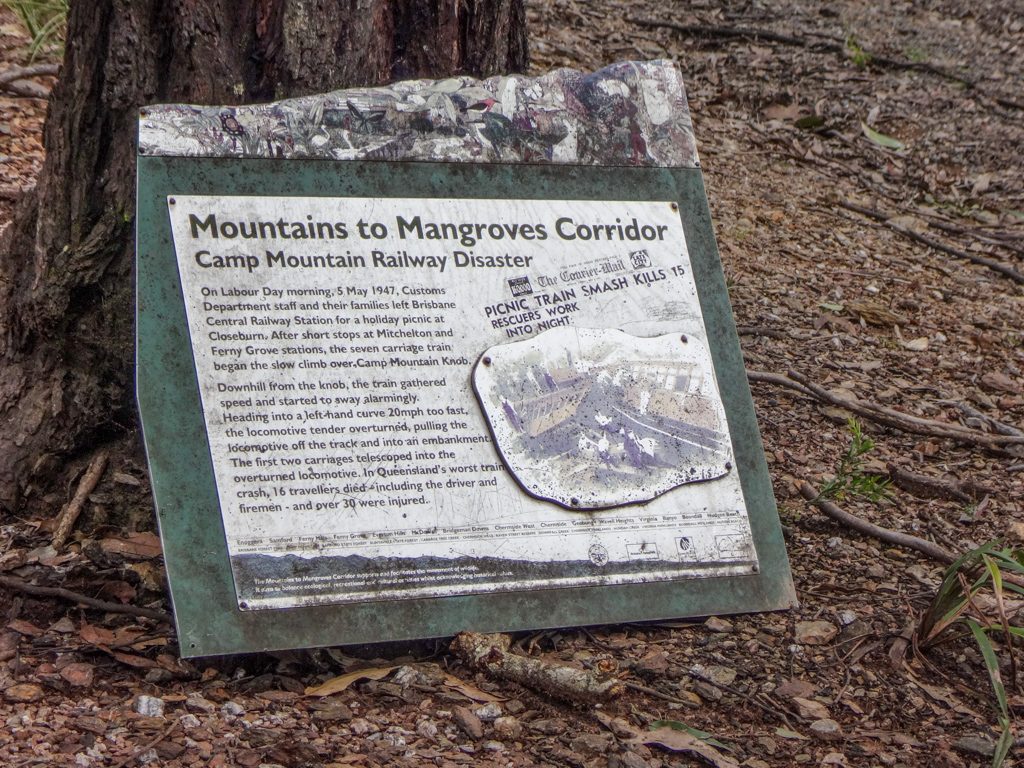 A railway line passed through here until about sixty years ago.

In 1947 this track was the site of a terrible trail crash which claimed the lives of fifteen people.

Today there are no trains – just joggers and cyclists enjoying the serenity of the surrounding bushland. 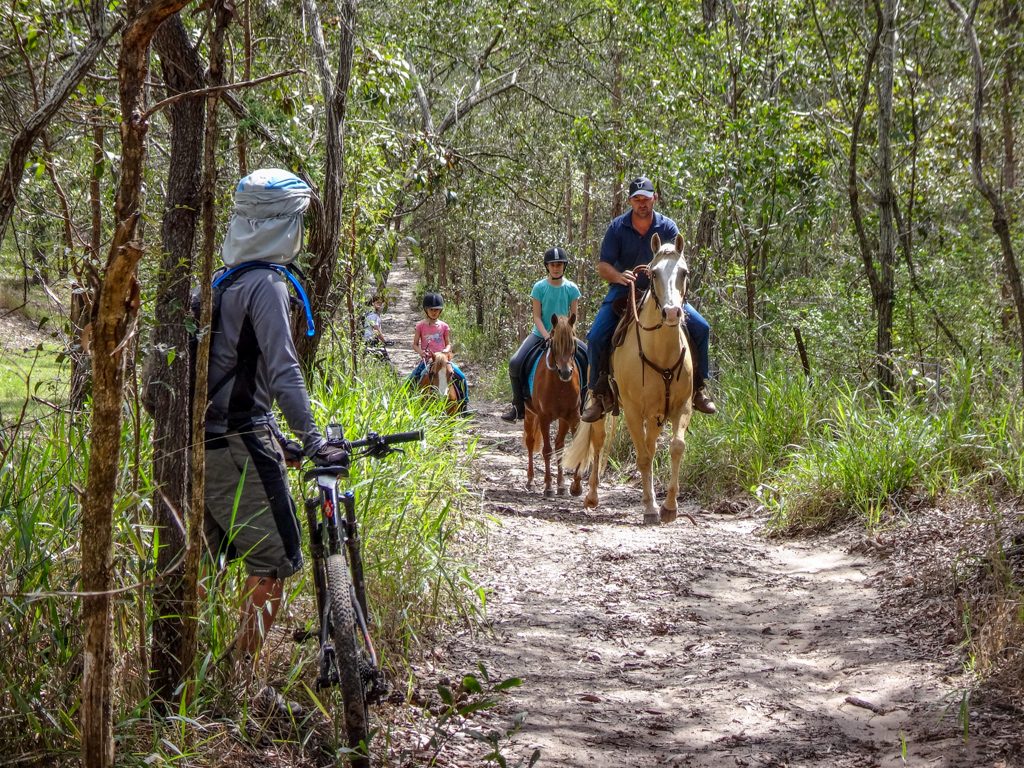 Continuing towards the D’Aguilar Range, we followed Pony Trails through Samford Valley.

Horses are often unpredictable, so we gave them plenty of room whenever we encountered them.

The pony trails led us to the foot of the Mount Nebo, where we climbed the Goat Track.

It’s only a few kilometres from top to bottom, but the steeper gradient spread us out.  We each pedaled upwards to the ticking of our own individual drumbeat. 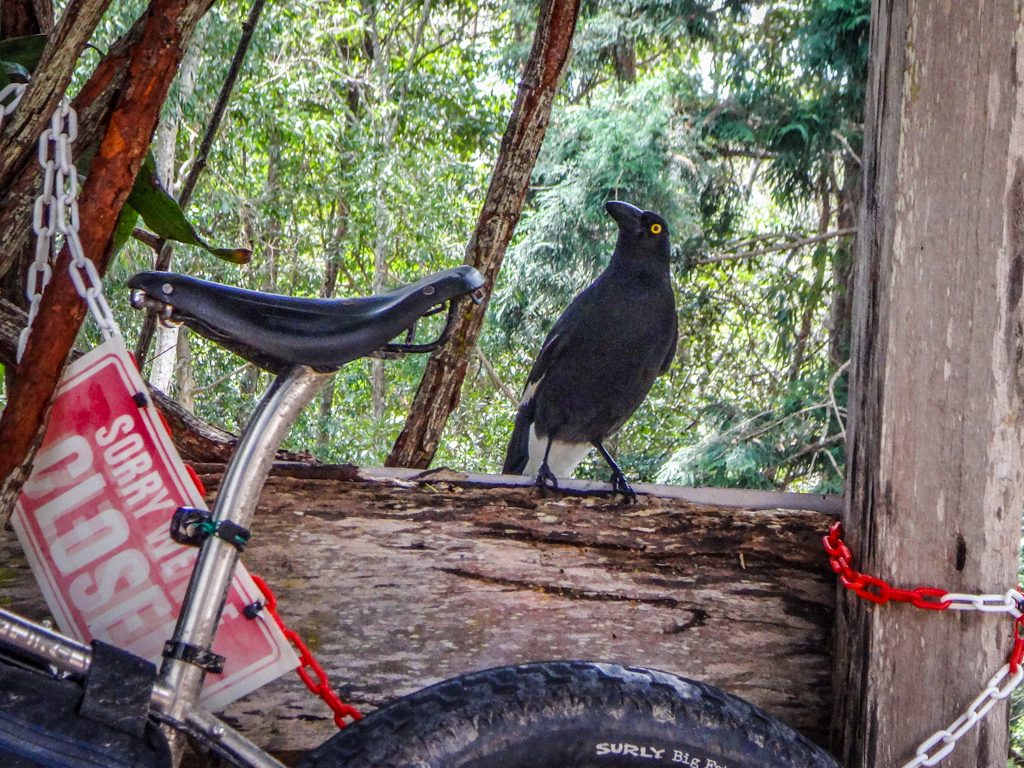 We refueled at Mount Nebo under the watchful eye of the local currawong. 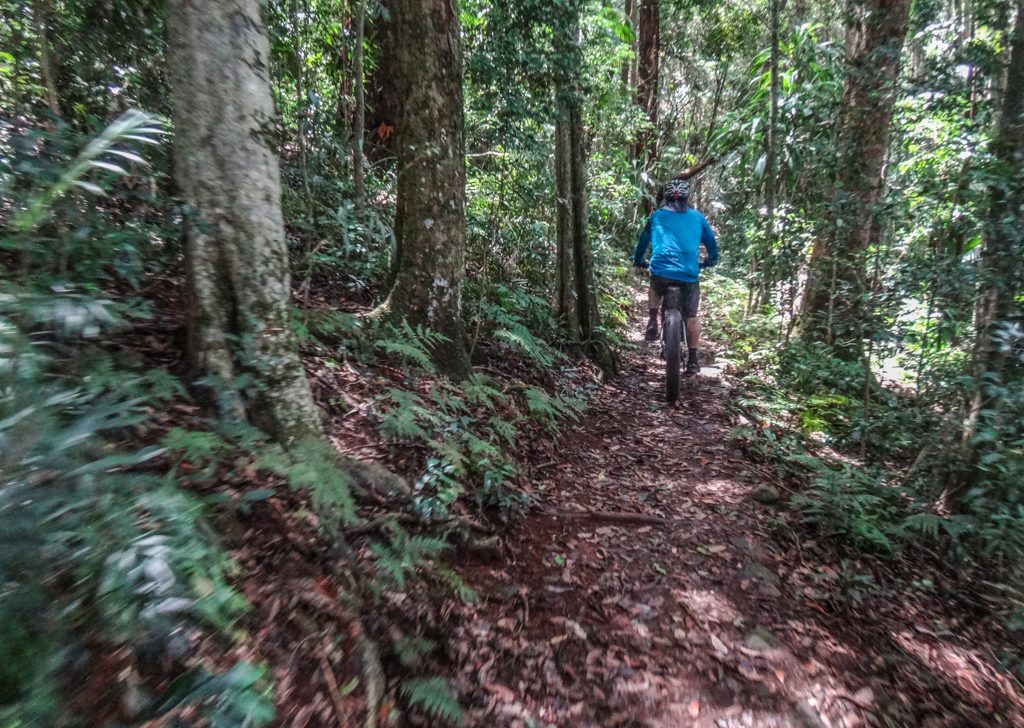 With full tanks and rested legs we disappeared into the thick mountaintop rainforest, following a tight narrow track through the trees. 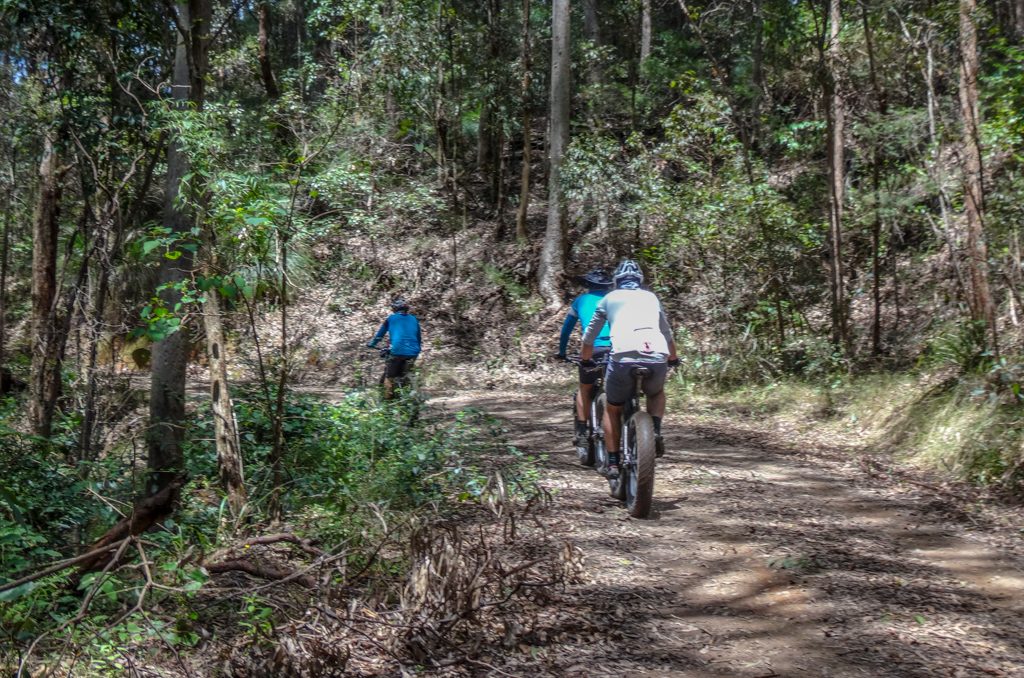 The track emerged at South Boundary Road, where we turned right and headed down the hill towards the city. 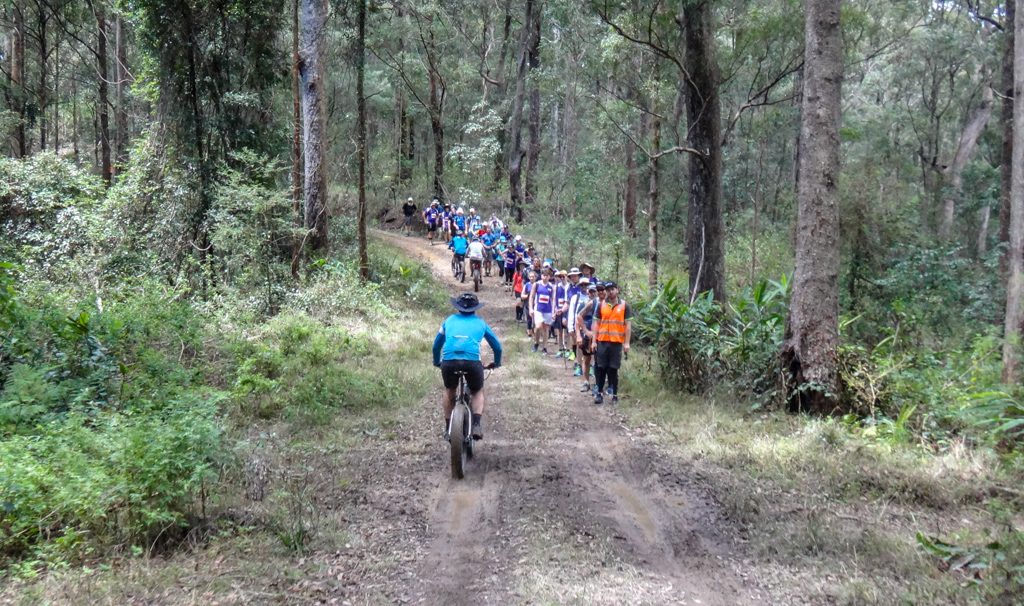 It was a busy place today.  Several dozen people were on a one-hundred kilometre walk through the national park.  They stopped and stood aside to let us pass. 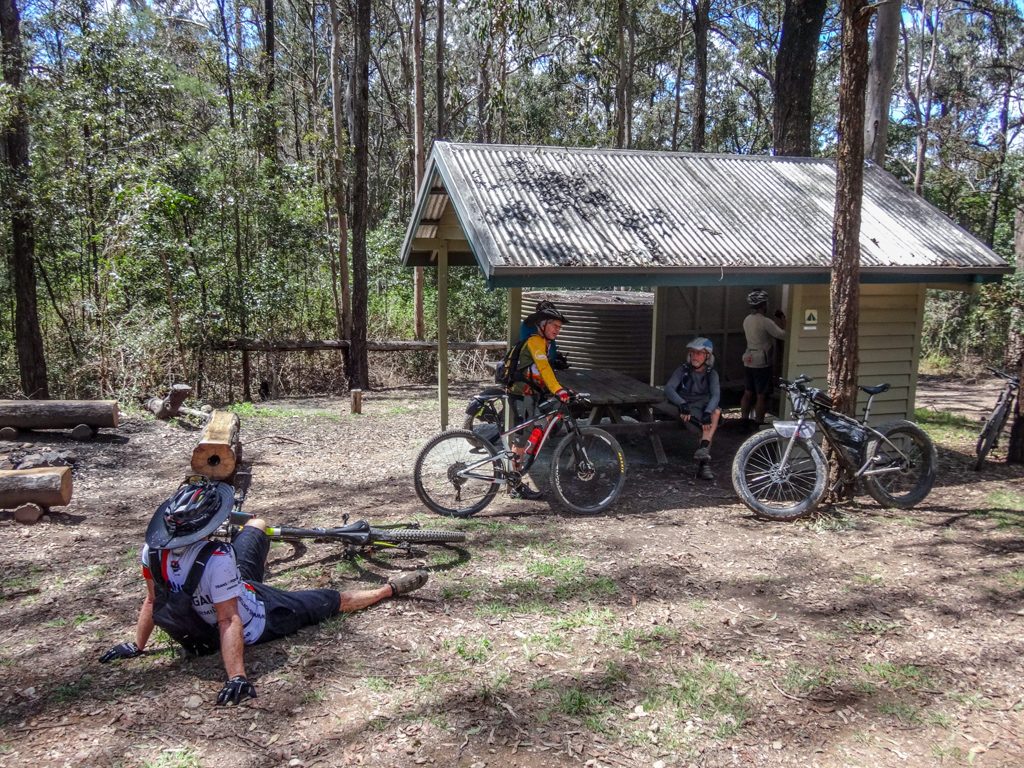 After about half an hour in the national park, we reached the Scrub Road shelter, where Russel was waiting for us. 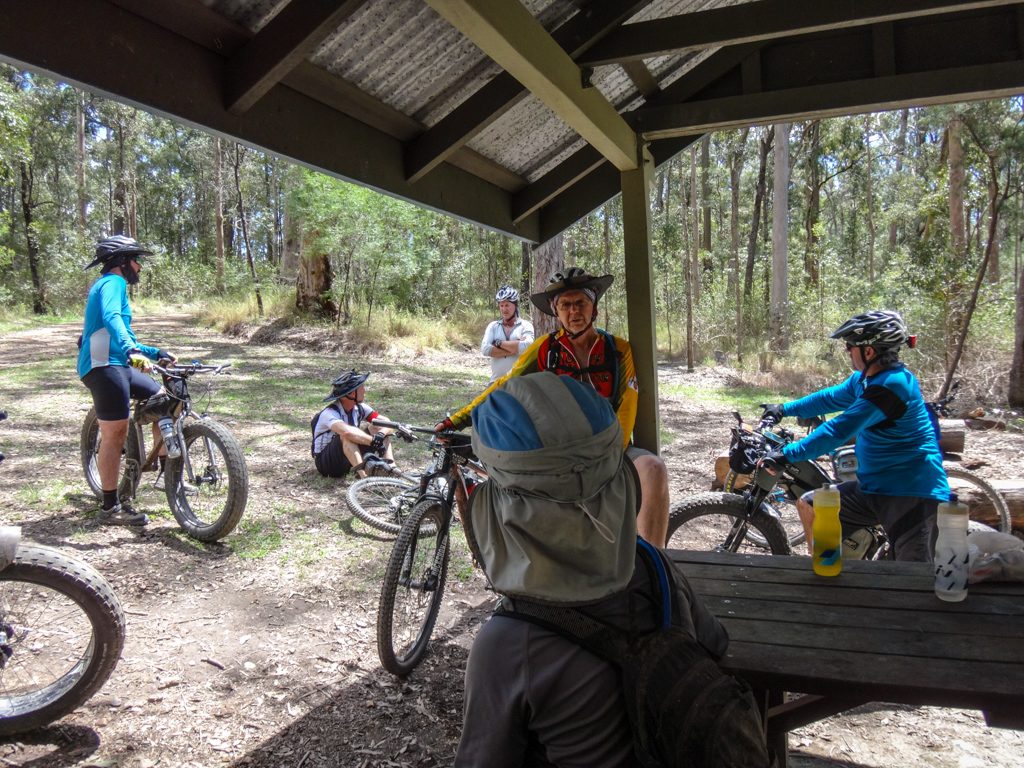 This was the perfect place for a quick stop.  We’d been riding for about fifty kilometres and welcomed the break.

At this point Wayne left us and headed home.

The rest of us continued towards Gap Creek. 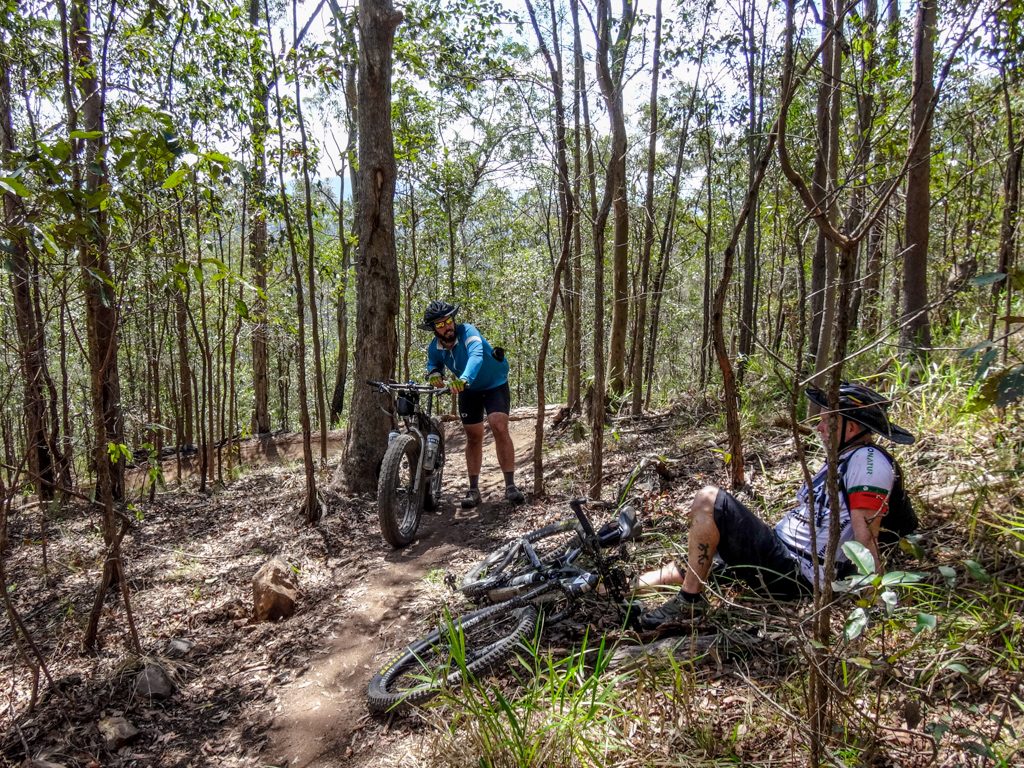 With about seventy kilometres in our legs, we arrived at Gap Creek and the tough climb up Mount Coot-tha via Highwood Road.

The new tracks were beautifully groomed, but we found it difficult to pedal up the hill.

We stopped a few times.

I grinned optimistically.  “Only a short distance now.  Soon we’ll be at the top and it will be all downhill.” 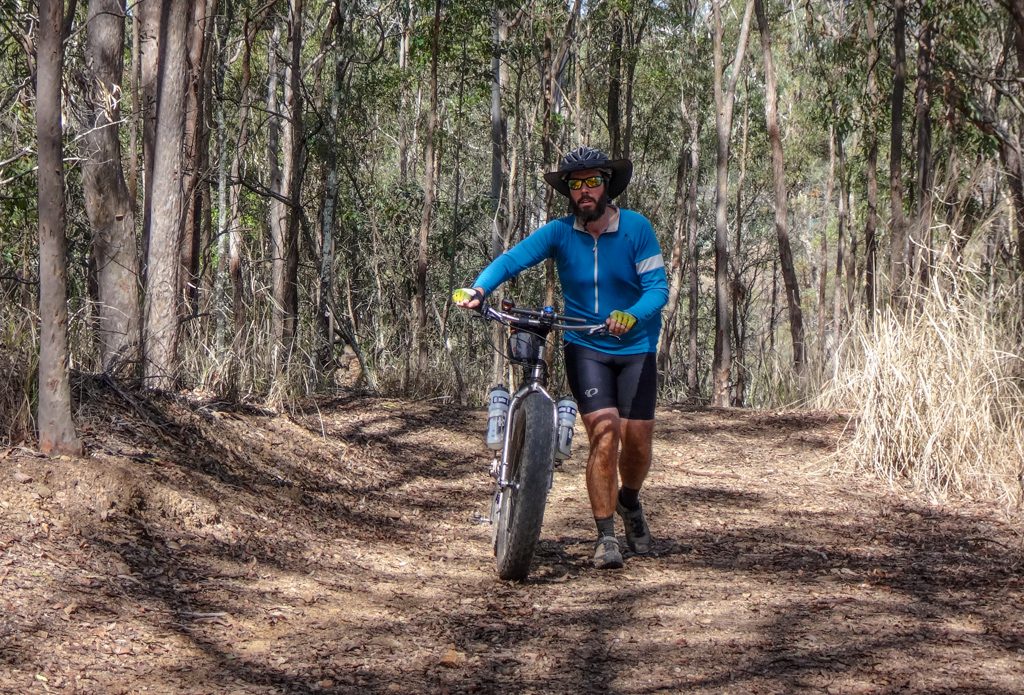 On top of the Mount Coot-tha, we deviated from the planned course.  Instead of going down “Powerful Owl” we followed some steep fire trails south towards Indooroopilly.

The descent was fun while it lasted, but it meant we had to scramble up more steep hills.  Several times. 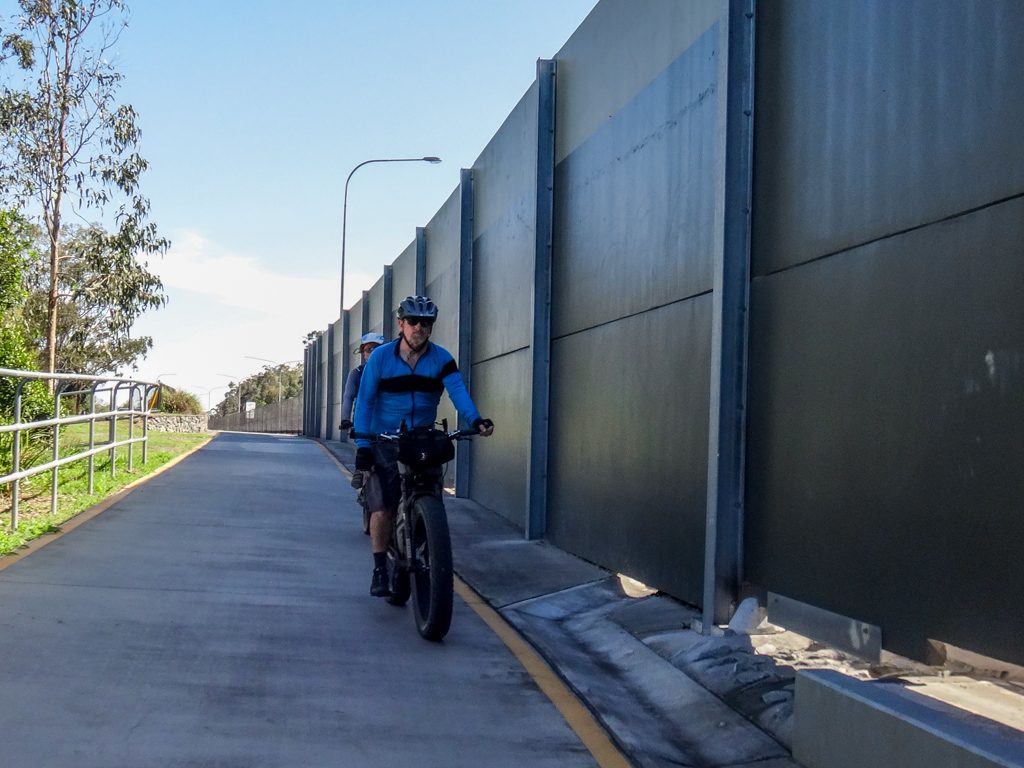 With my legs feeling like jelly, we finally made it out of the forest and on to the Western Freeway bike path.

At this point we’d climbed about two-thousand metres in vertical ascent.  This was not the leisurely long ride I had anticipated 🙂 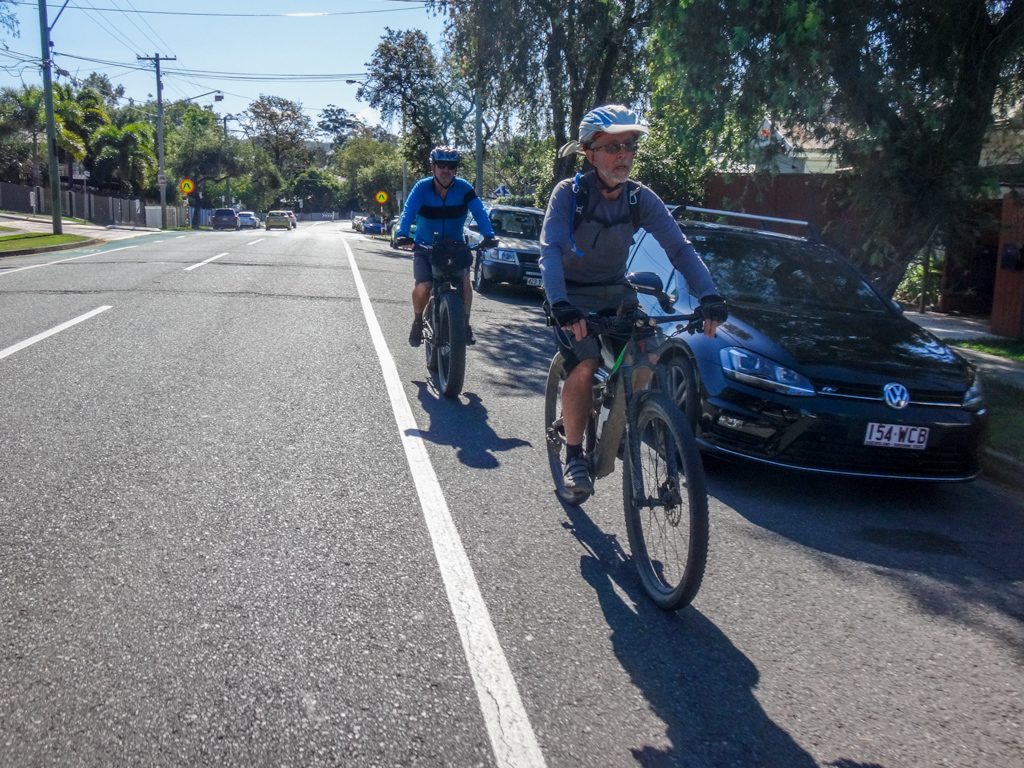 We followed bike lanes through Toowong… 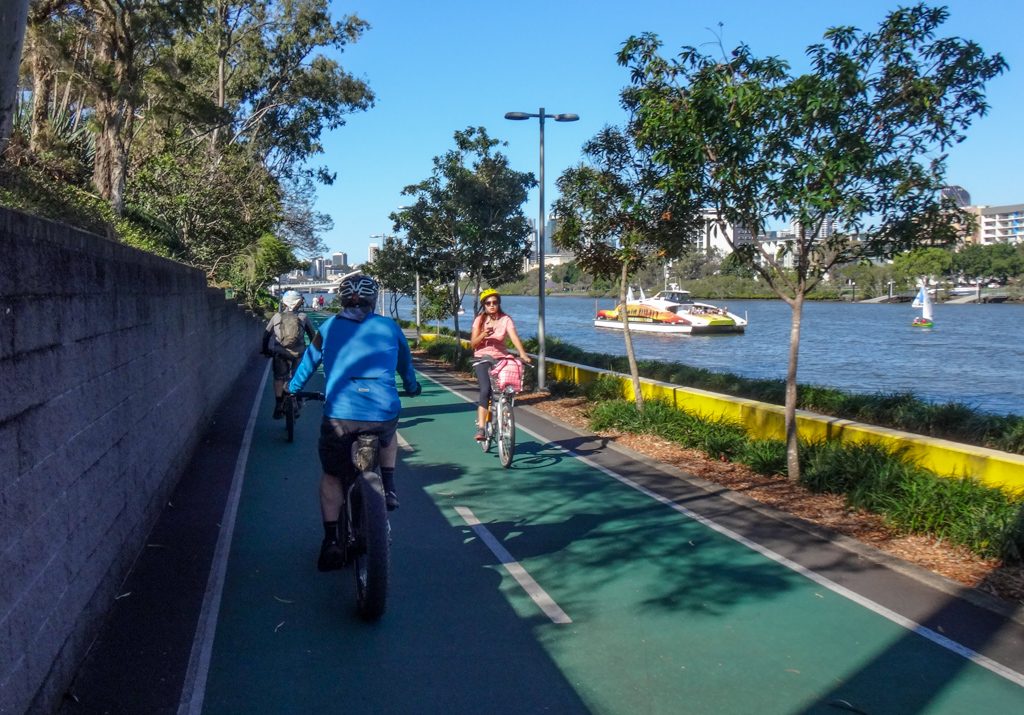 …and emerged at the riverside bike path next to Coronation Drive. 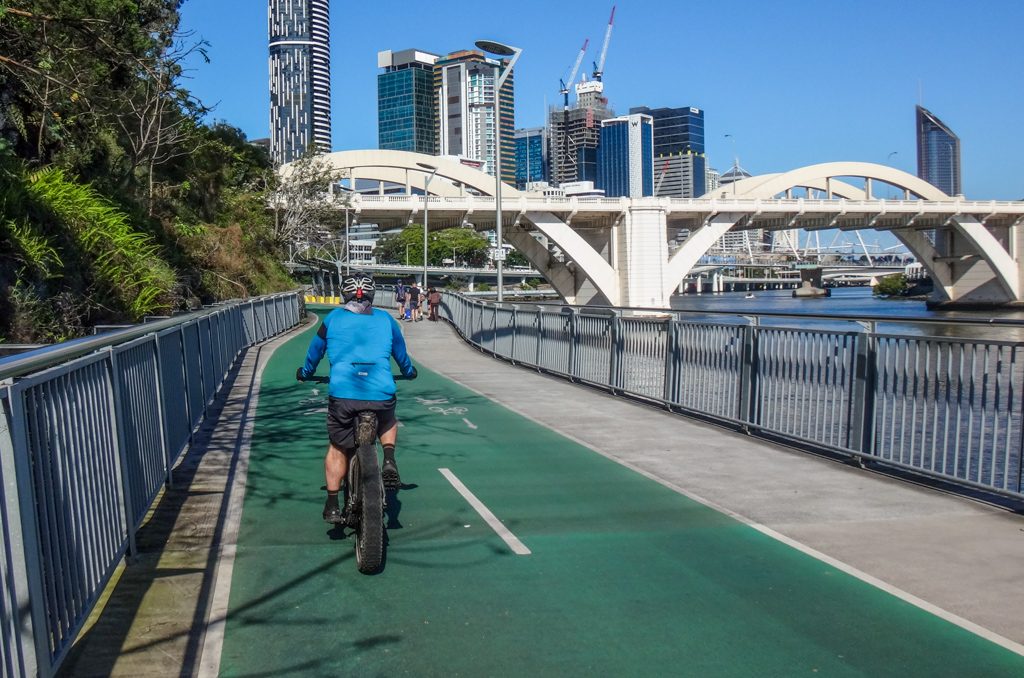 It’s always a pleasant ride beside the river. 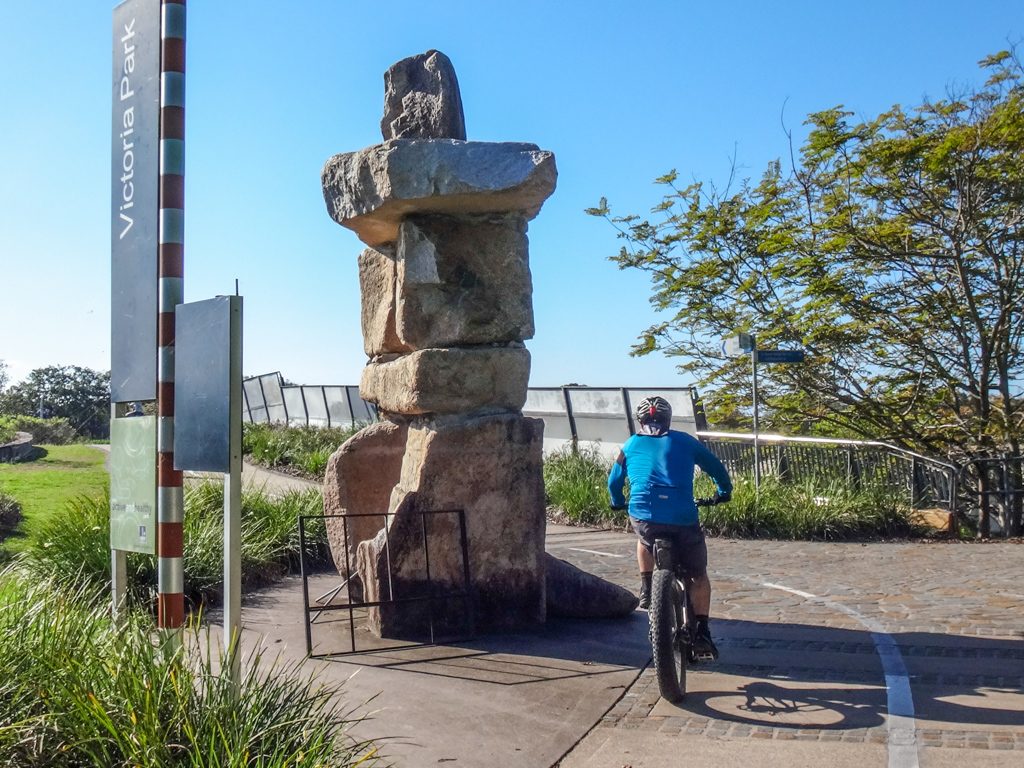 Our path took us through Victoria Park and past the Inukshuk monument.

This five metre high stone arrangement was a bicentennial gift from the people of Canada. 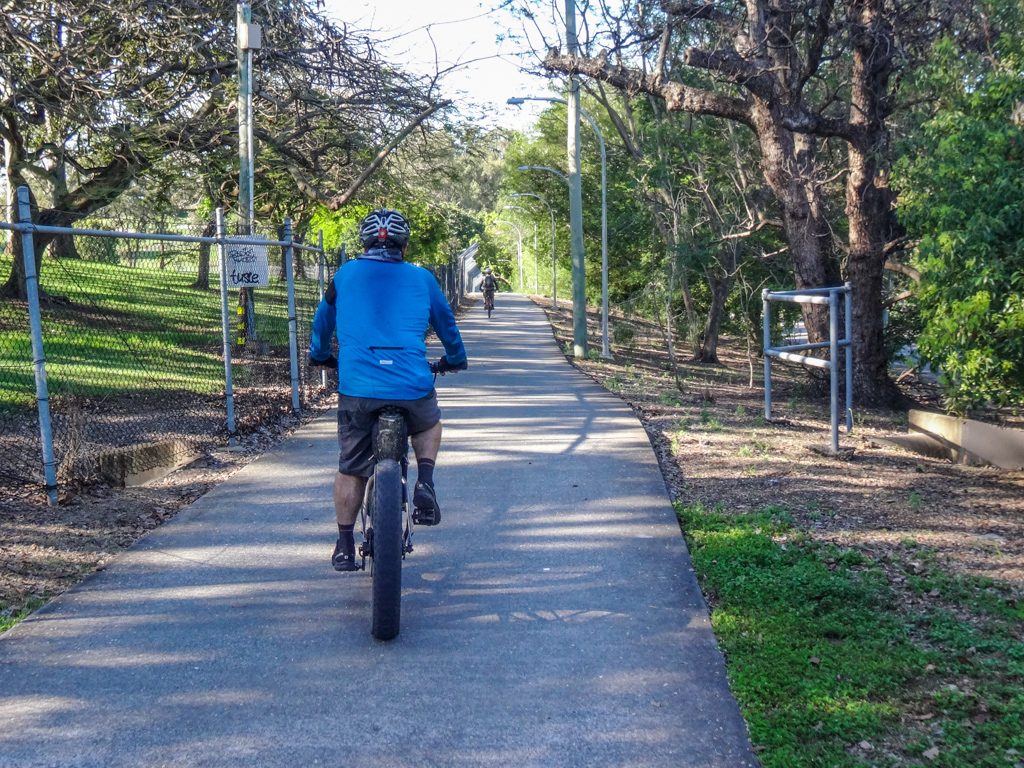 We pointed the bikes northwards, and headed out of the city along bike paths and quiet back streets towards the Boondall Wetlands.

Around the ninety-five kilometre mark I decided to bail out and caught the train home.

Darb and Eric continued to Banyo for a well-earned drink at “All-Inn Brewing”.

The final section of the ride was through the mangroves of the Boondall Wetlands.  This flat and shady forest provided perfect conditions for the end of a strenuous day.

Darb and Eric ended up riding just under 140 kilometres in about twelve hours.

During that time they climbed about 2,500 metres in vertical ascent.

The rest of us didn’t make it quite as far, but we all agreed this was a much tougher ride than we had anticipated.

The unplanned deviation after the top of Mount Coot-tha added to the difficulty.

Since I didn’t make it, I’ll have to rate this one ten out of ten on the tough-o-meter.  It was too hard for me on the day, which means I’ll have to toughen up and try it again some time!

Thanks to Darb, Eric, Jason, Justin, Wayne and Russel for another fun adventure.

Can we take it bit easier next week please? 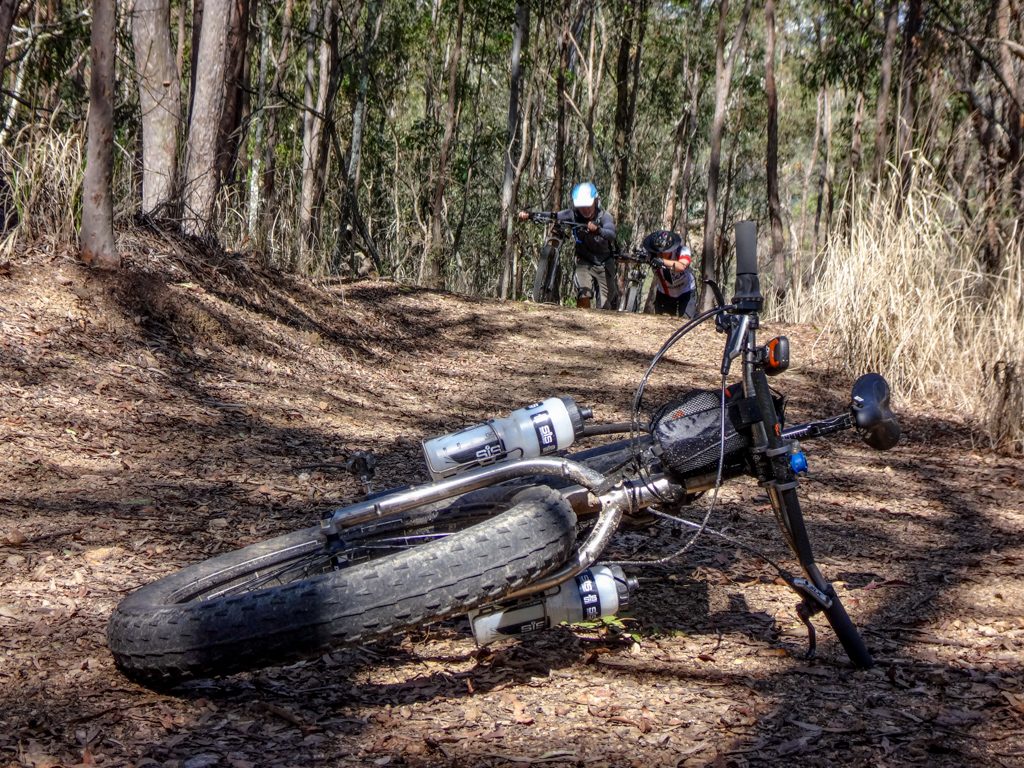