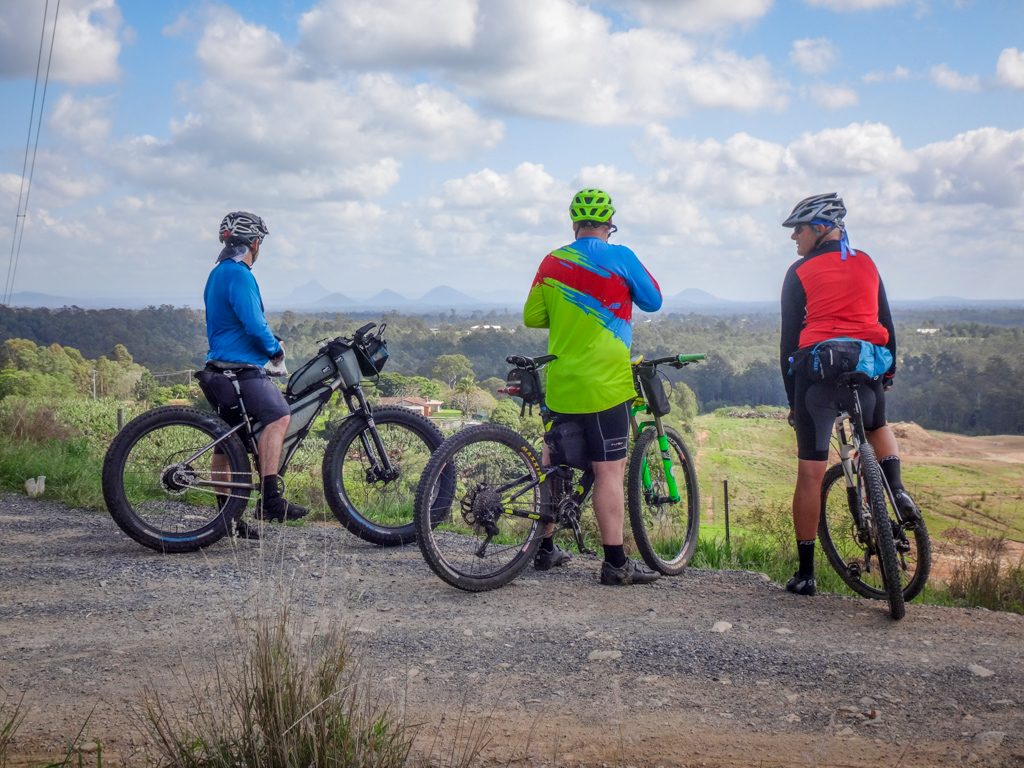 Today’s ride followed a lazy 110km loop through bushland and bike tracks to the north of Brisbane. 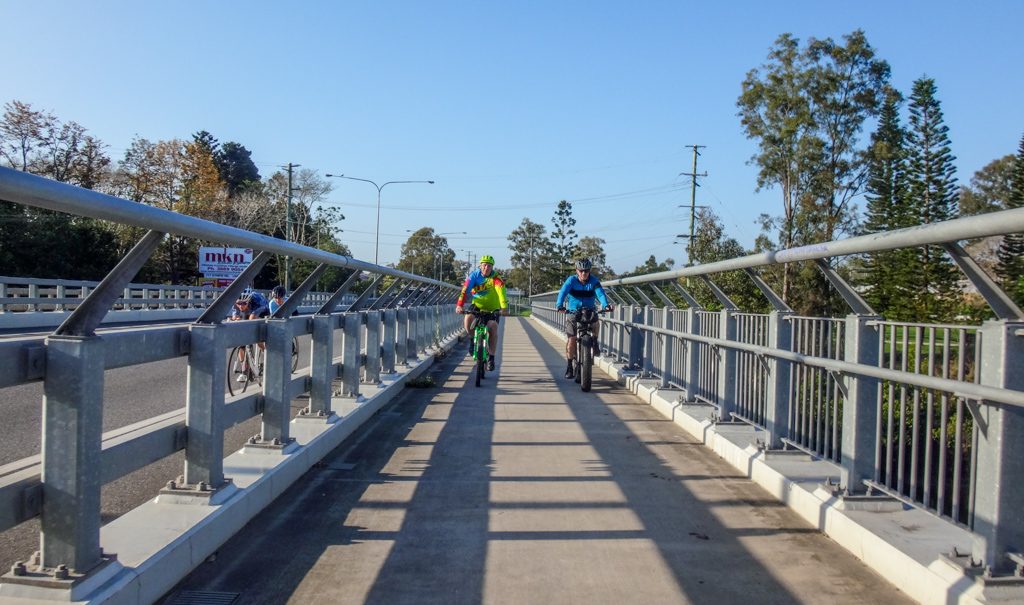 Darb wanted to clock up as many kilometres as he could in the remaining few days of October.

I wanted something less hilly than last week’s marathon effort.

So we reached a compromise, and picked a course that was long, but reasonably flat, starting from my place at Lawnton, heading north-west into the hills, before following a huge loop back to the coast and around the Redcliffe Peninsula. 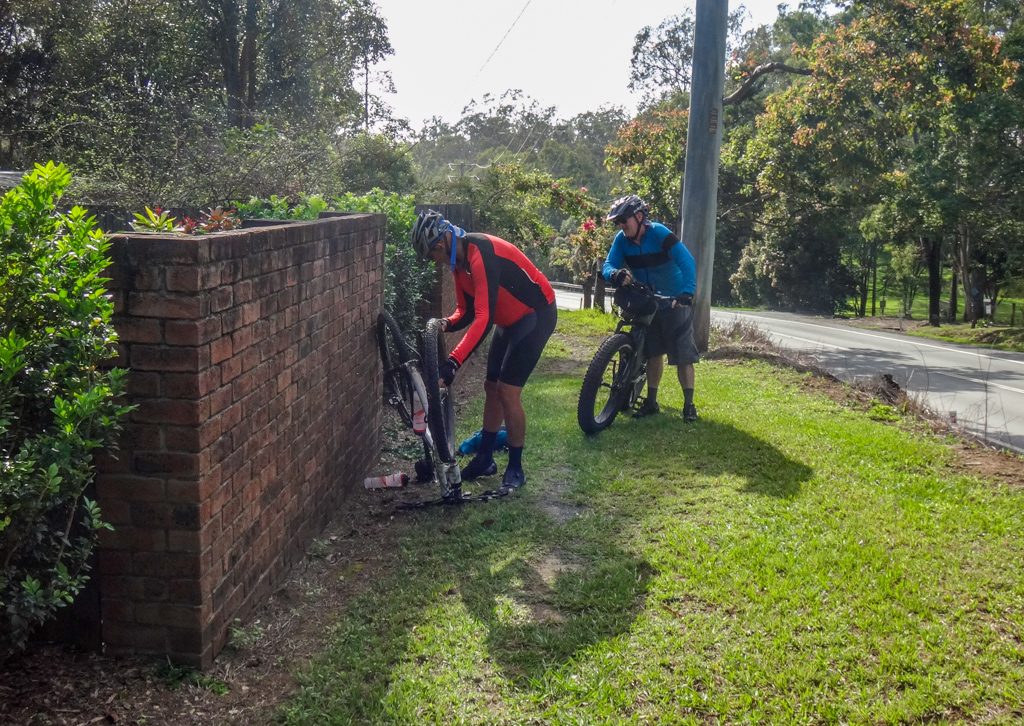 Thankfully we got the obligatory flat tyre out of the way early in the ride.

We provided encouragement and advice while Paul did all the hard work.

His spare tube had a hole in it, but I was able to lend him one of mine.

Sometimes it’s worth riding with friends 🙂 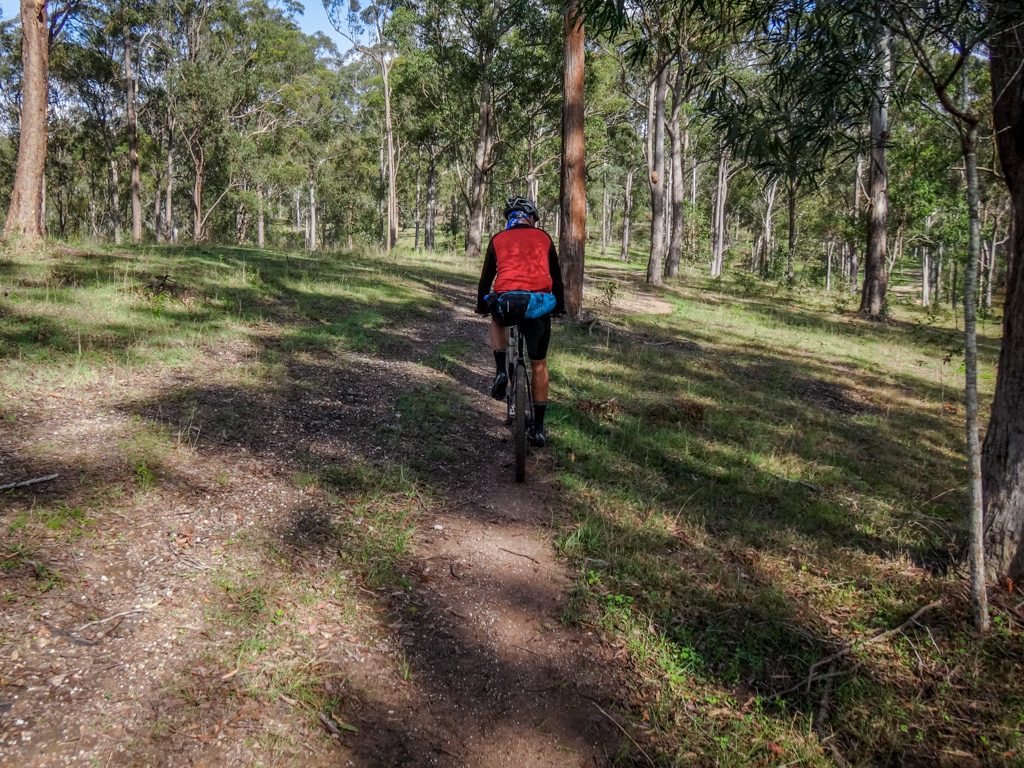 With the puncture of the day safely behind us we left the paved road at the end of Dunlop Lane and followed an old road reserve north through bushland. 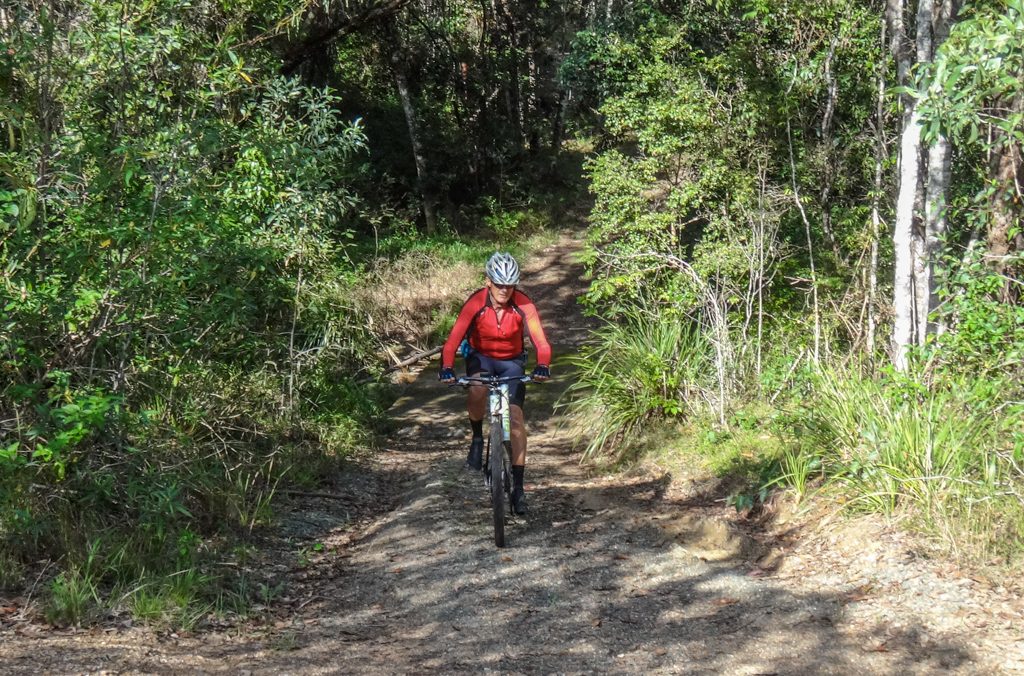 After bumping downhill for about a kilometres the track spat us out at a small causeway over Mosquito Creek. 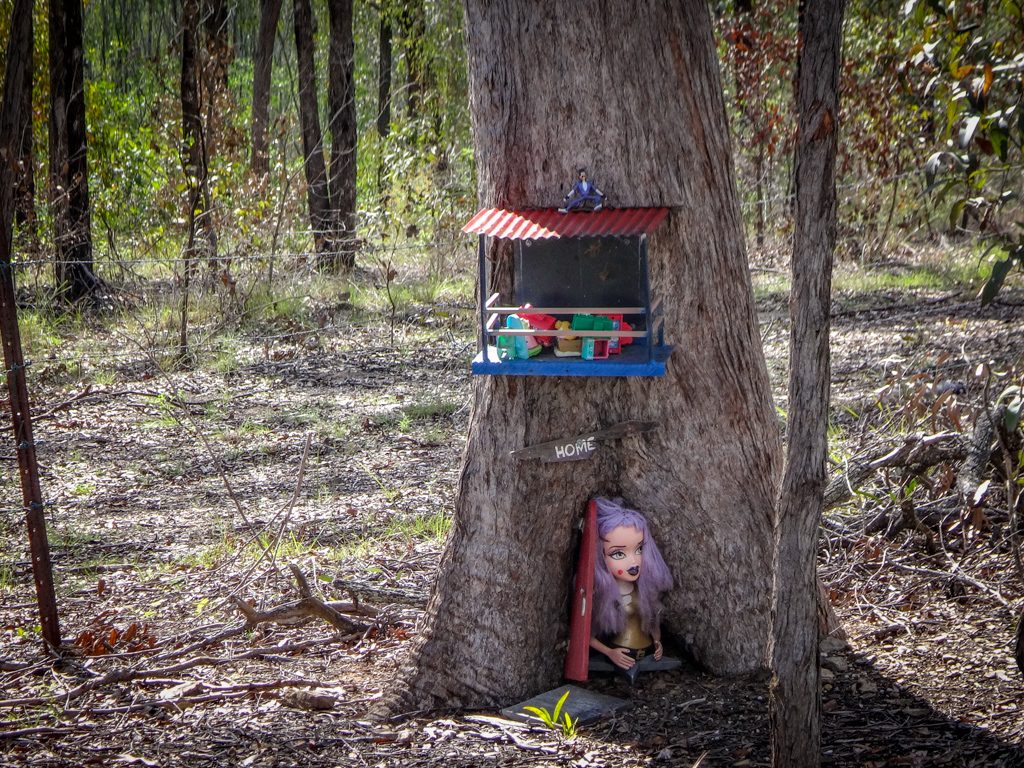 As we continued north along Smiths Road, we encountered some strange sights.

A few months ago I met the man who created these roadside doll houses.  He made them to entertain his grandchildren. 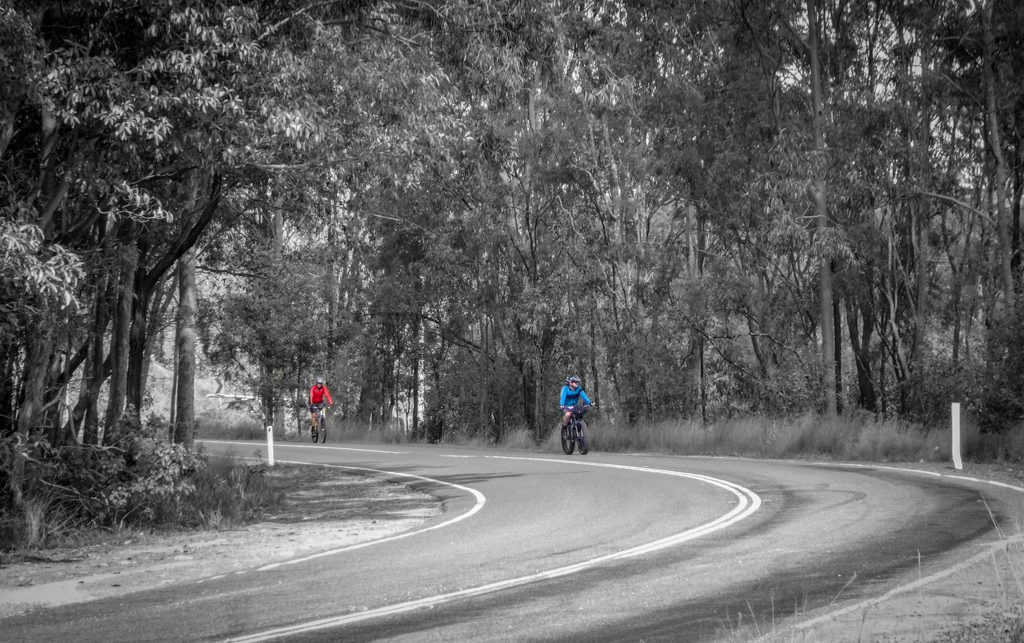 On the northern edge of our loop we had to ride on the road for a while.

It’s not a mountain biker’s favourite place, but at least it was quiet.

At the top of Raynbird Road we took a quick break.

This place has unusual views – to the north lay the Glasshouse Mountains;  to the east, Moreton Bay; while the tall towers of the Brisbane CBD are visible on the southern horizon. 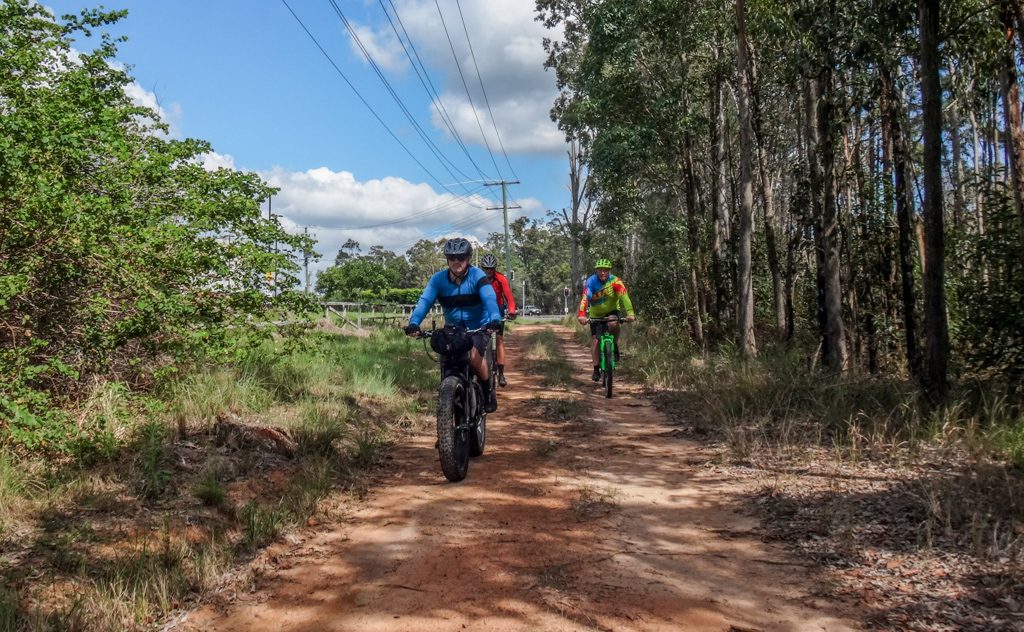 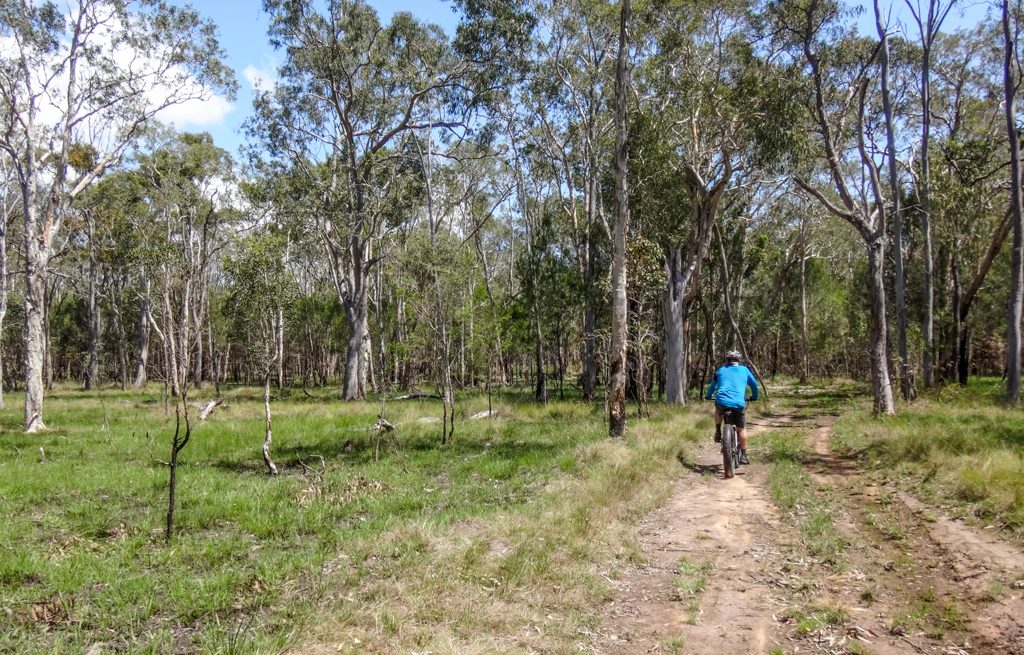 Although it’s one of the smallest national parks in the country, surrounded by housing developments and a busy roads, it’s a still a fascinating place. 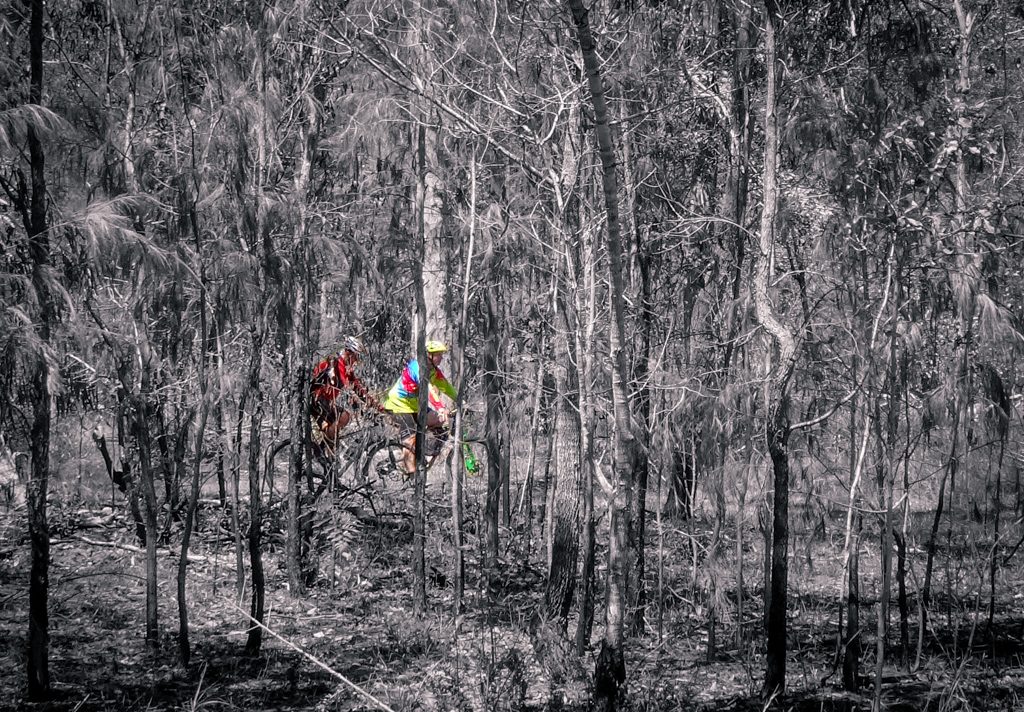 We followed a few fire trails and narrow tracks through the trees before continuing our ride towards Deception Bay. 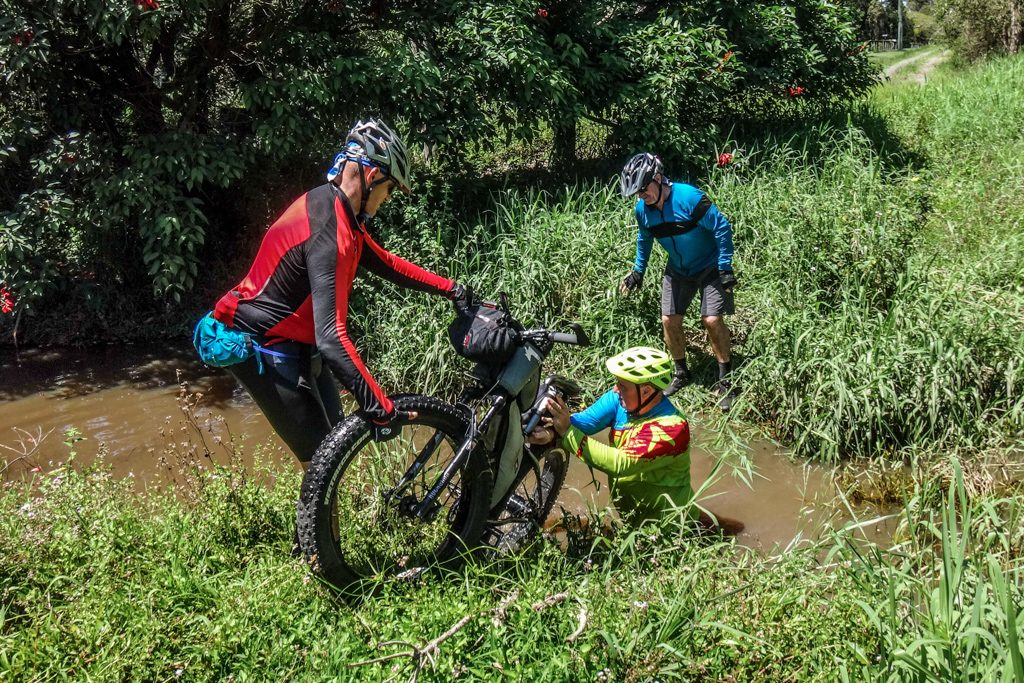 The last time we visited, Little Burpengary Creek was shallow enough for us to wade through.

Today it was much deeper due to recent rain.

We waded through the chest-high water, more concerned with keeping the bikes out of the water than staying dry ourselves. 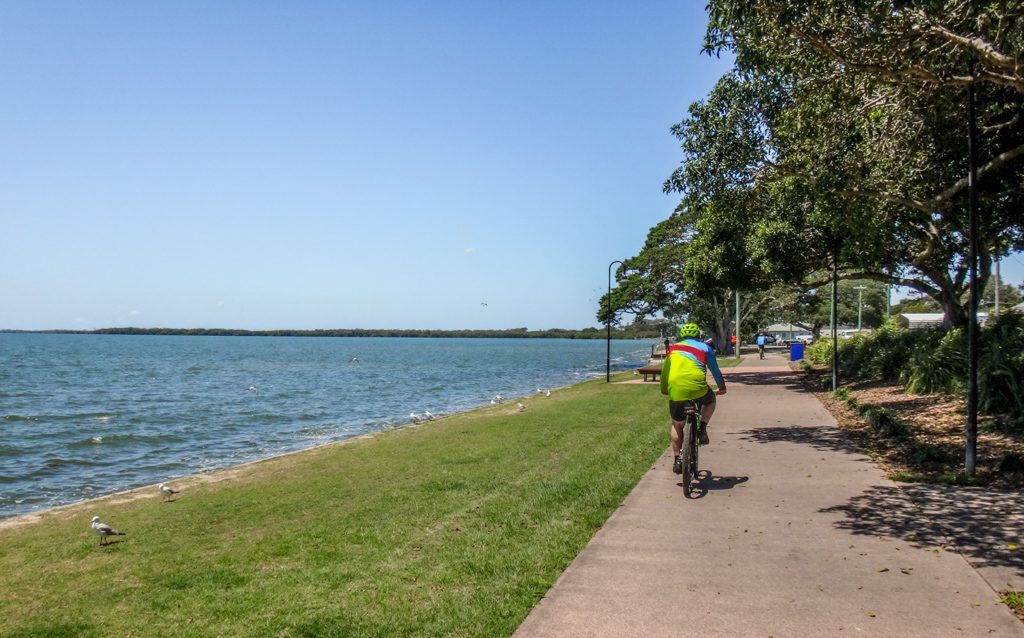 At Deception Bay we turned right and followed the shoreline south. 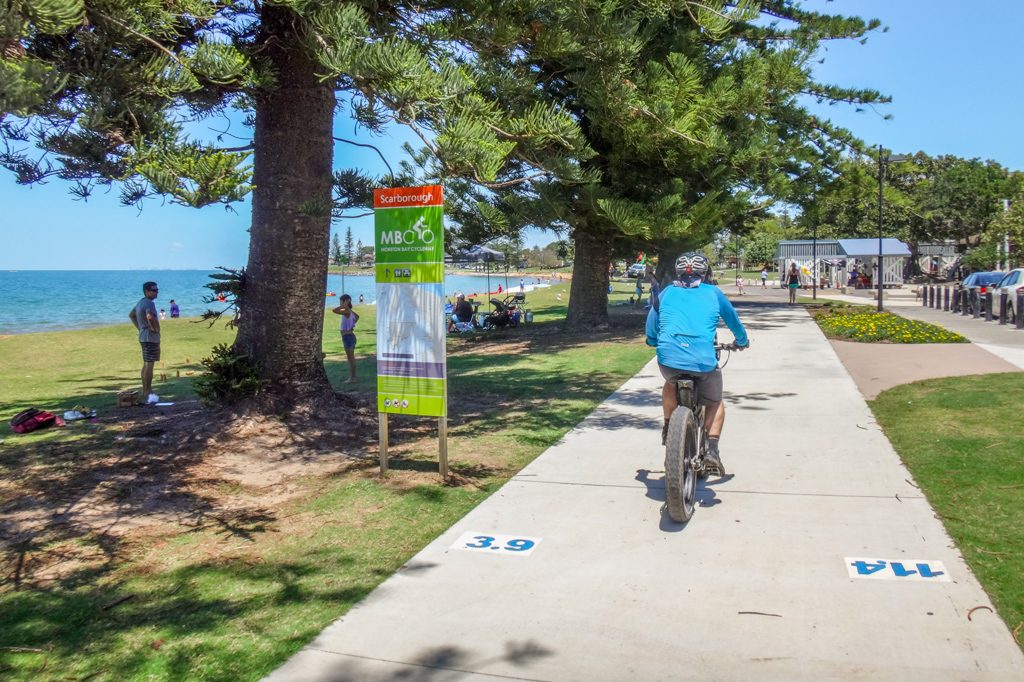 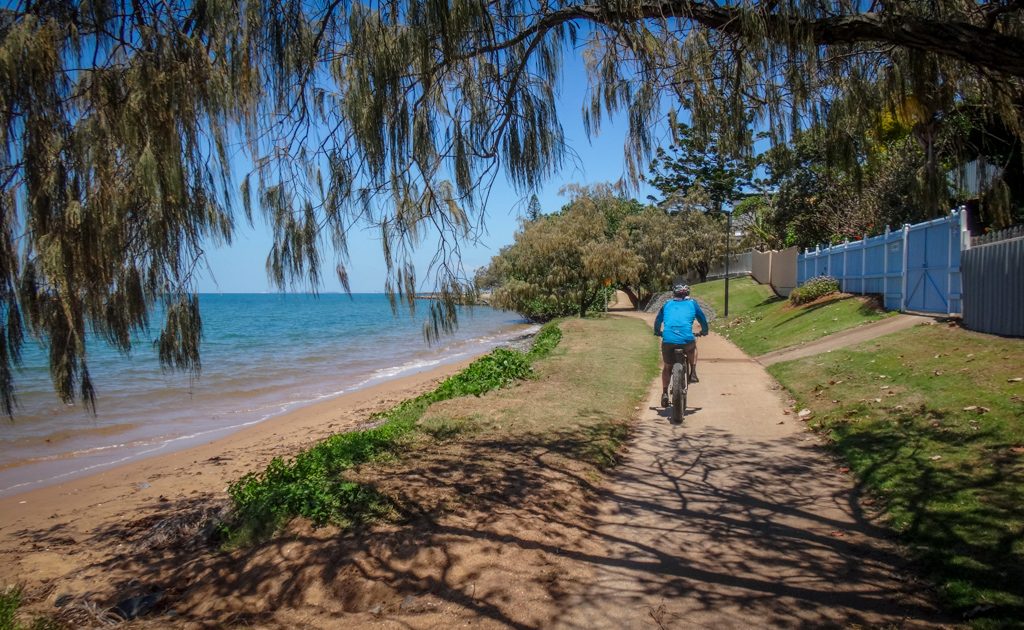 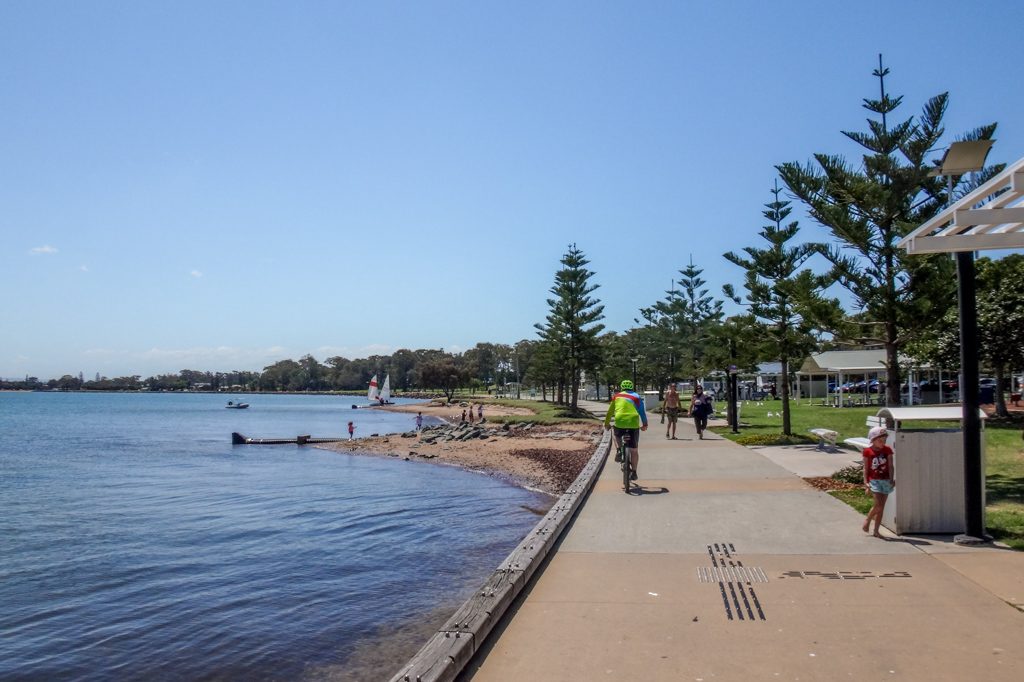 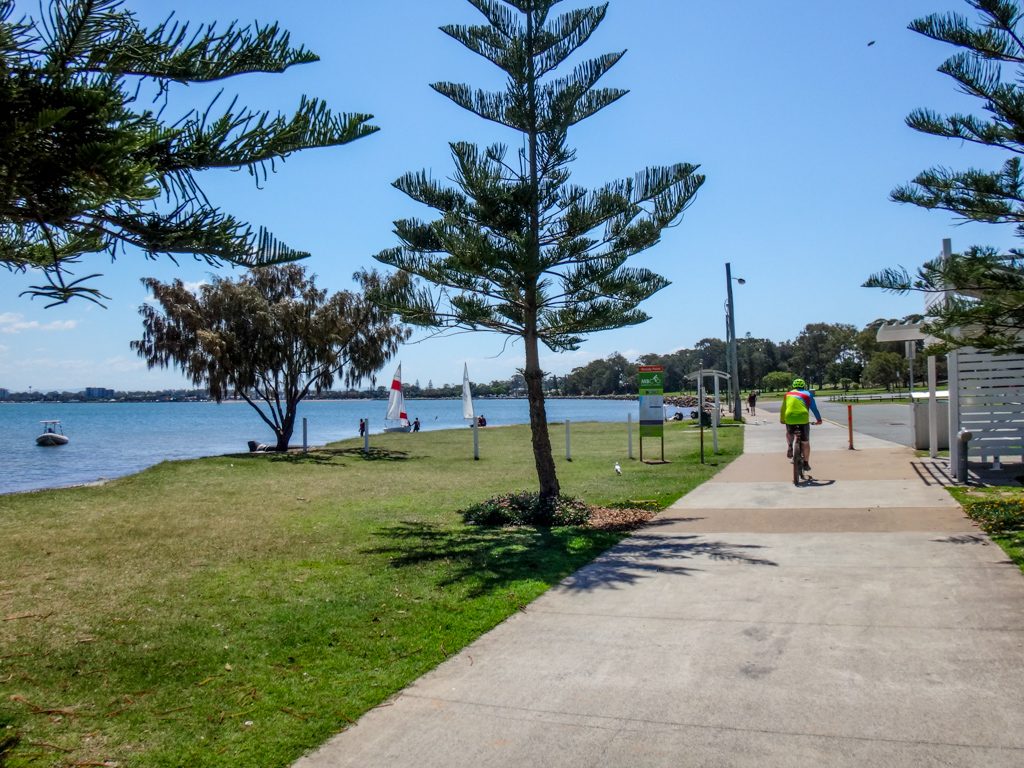 There are almost 40km of coastal bike paths between Deception Bay and Cabbage Tree Creek.

They’re some of the easiest and most pleasant kilometres you’ll ride. 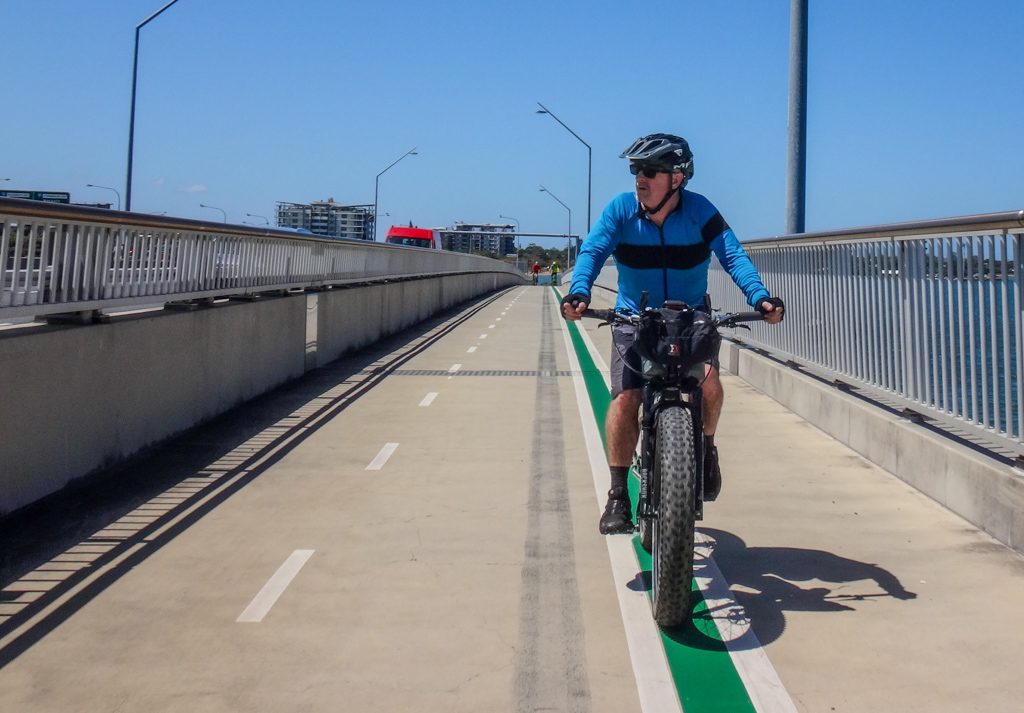 …and over the 2.7km long Ted Smout Bridge. 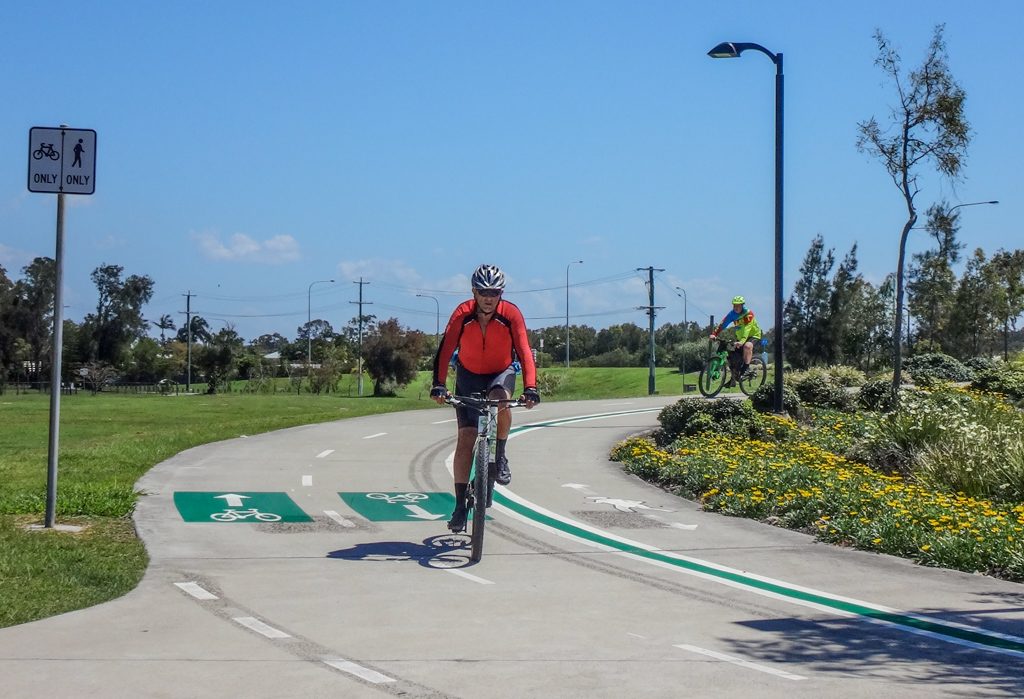 At Brighton, Paul and Simon decided to call it a day and head home. 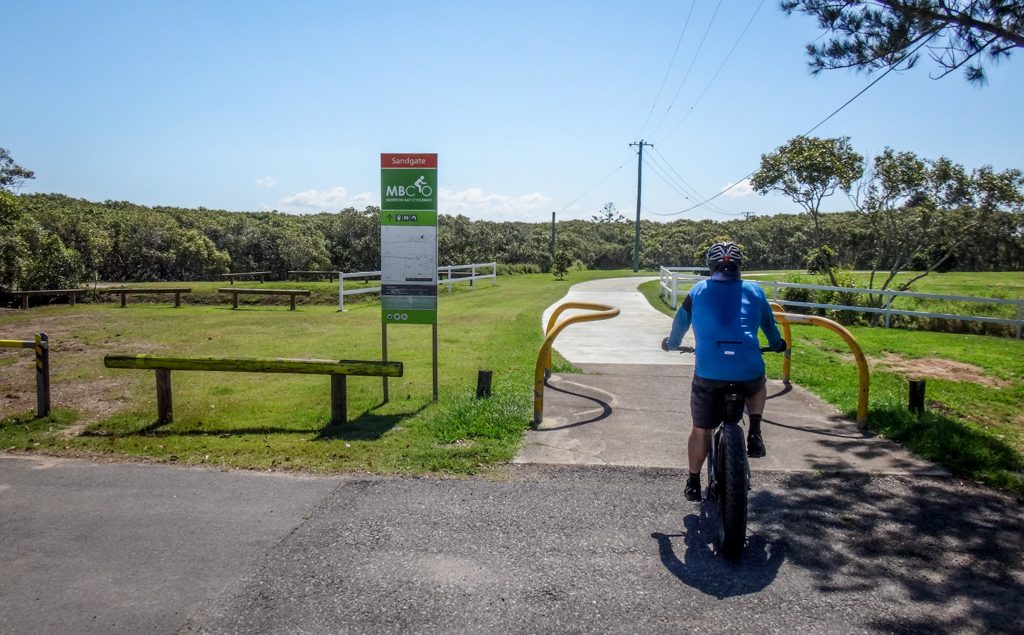 Darb and I continued south – he wanted to maximize his kilometres for the day, and I wanted to redeem myself after bailing out the previous week. 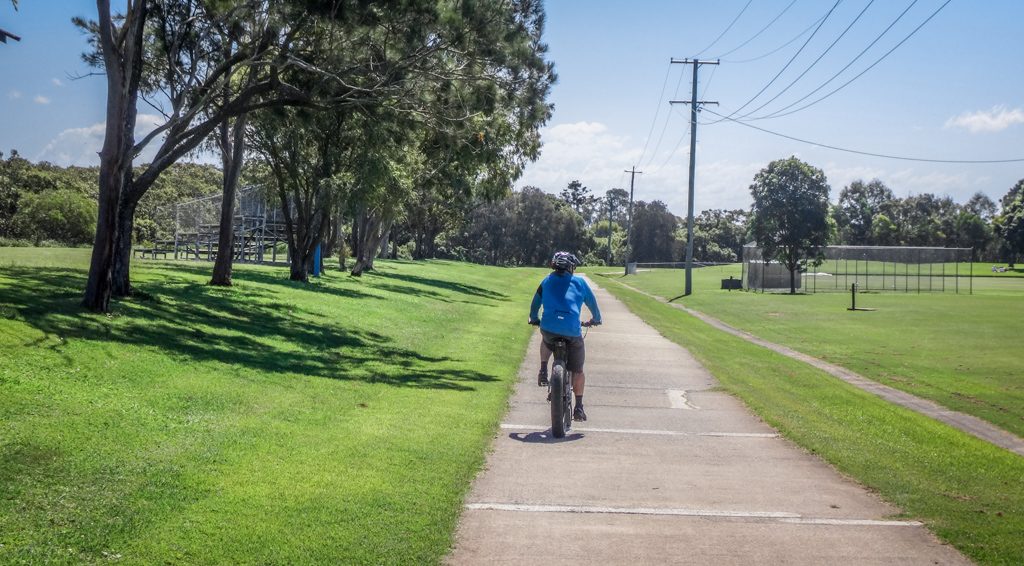 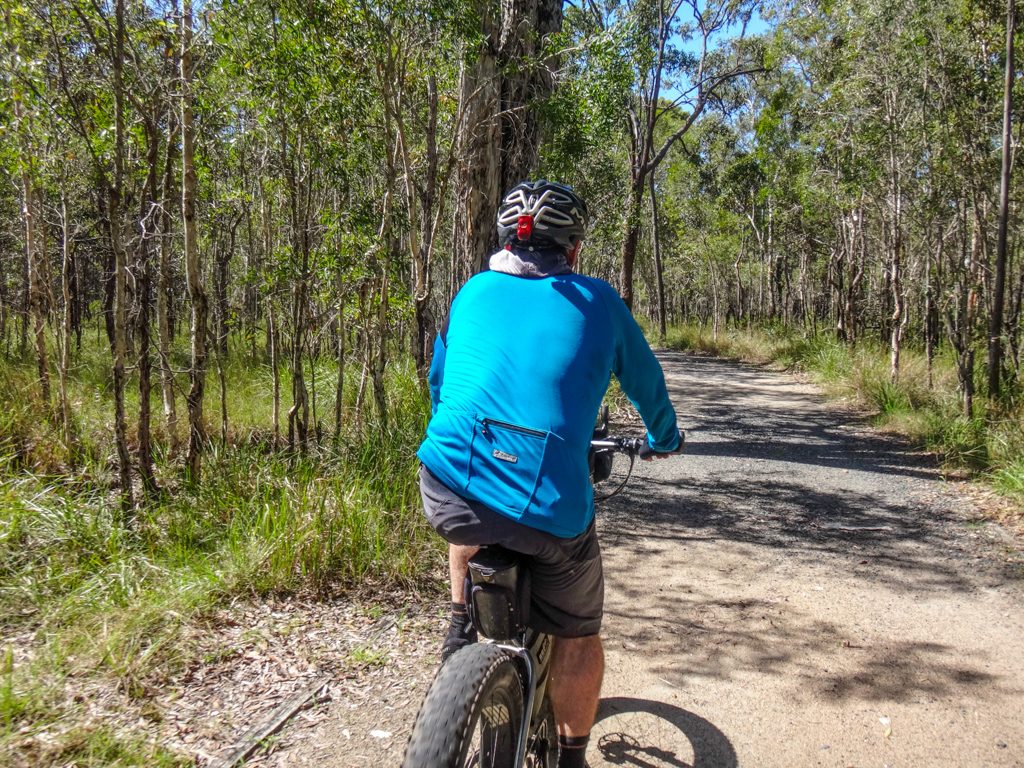 At the Deagon we left the path and followed some dirt tracks through the wetlands before heading towards the swampy trails of Deepwater Bend for the final part of our ride.

Darb ended up doing about 130km in about nine and a half hours.

I rode about 107km in just over nine hours.

During that time  we climbed about 800 metres in elevation, and I burned about 4,500 kcal.

Considering the distance, this was a very easy ride.  Provided your backside can handle sitting on a bike seat all day, and your legs can handle turning the pedals, I think anyone could do it.

Thanks Darb, Simon and Paul for a fun day out. 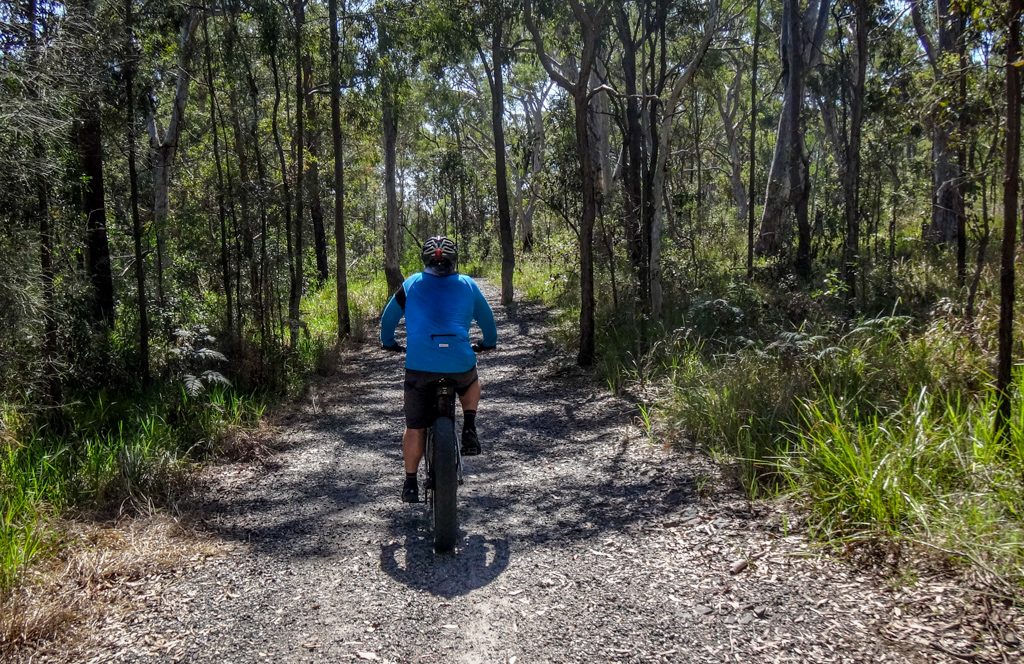