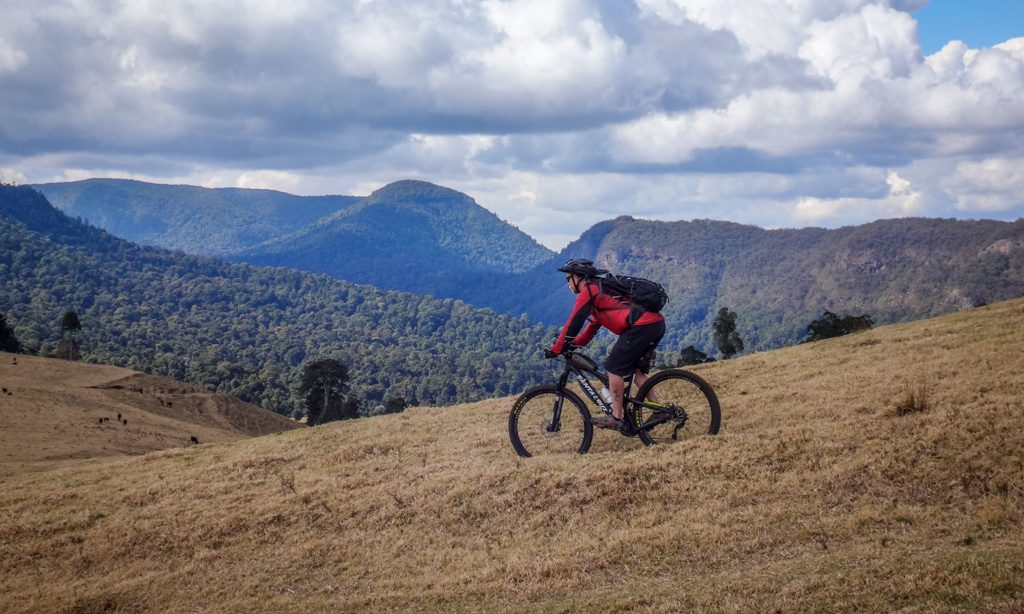 Paddy’s Knob is a mountainous outcrop with spectacular views of Condamine Gorge.  I was curious to explore it after finding an obscure reference to it on the Queensland Government National Parks website.

My long-suffering  friends humored my crazy whim and agreed to join me. 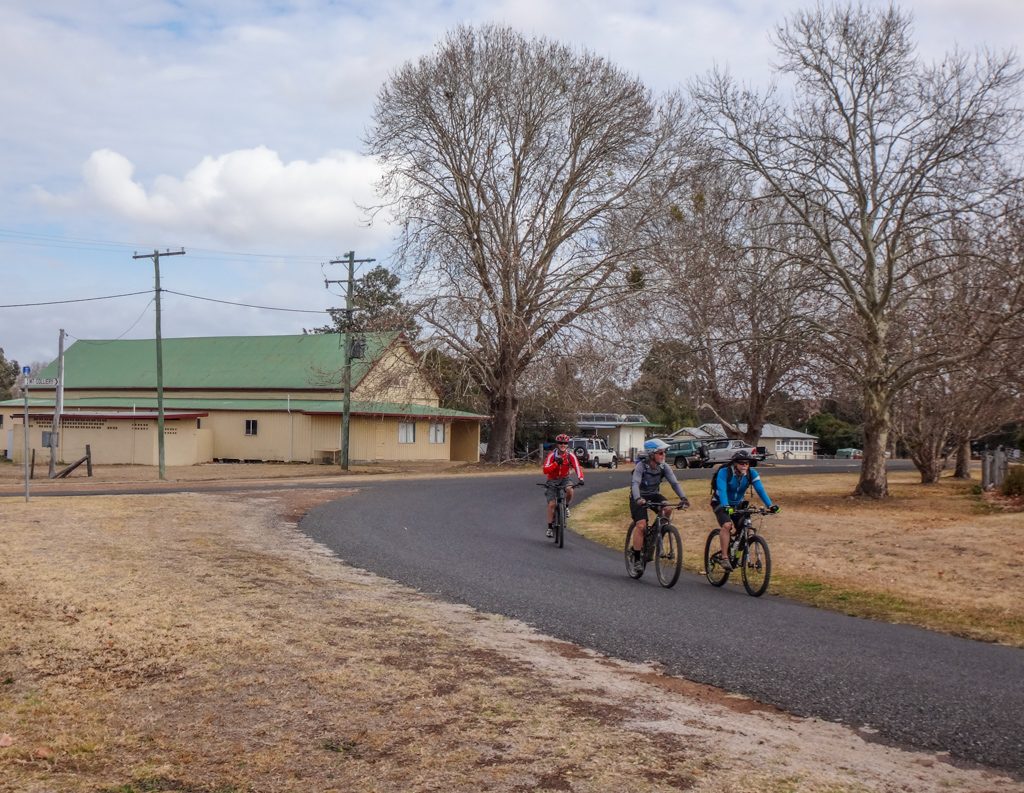 We drove two and half hours  west from Brisbane and started our ride from the small village of Tannymorel. 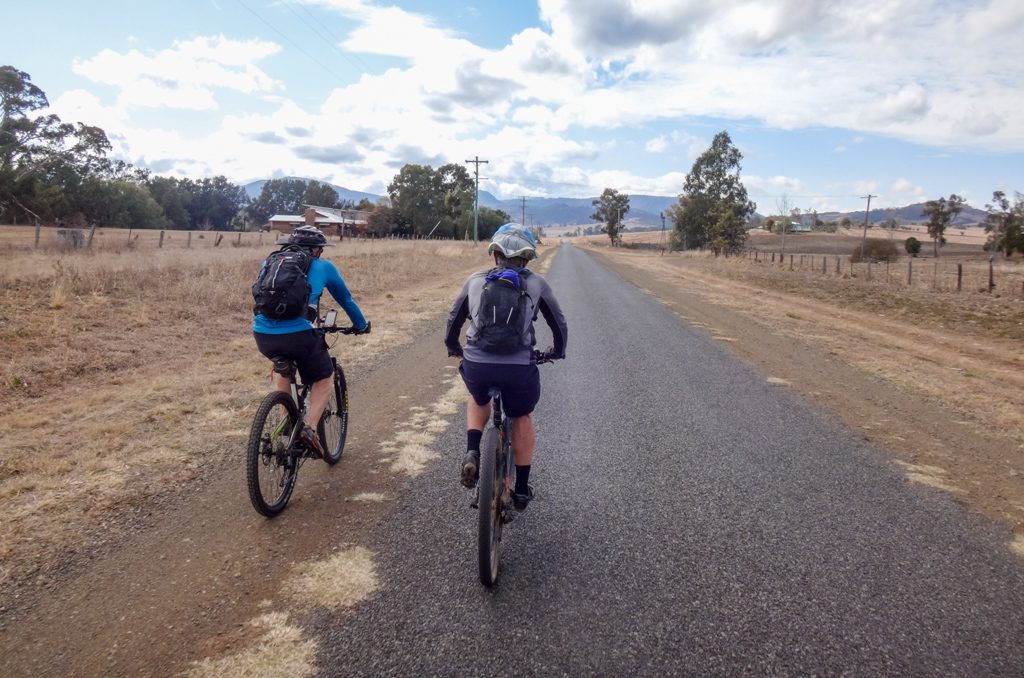 This former coal-mining town sits at the mouth of a long, deep valley.  We followed the aptly named Mount Colliery Road up the valley and into the hills. 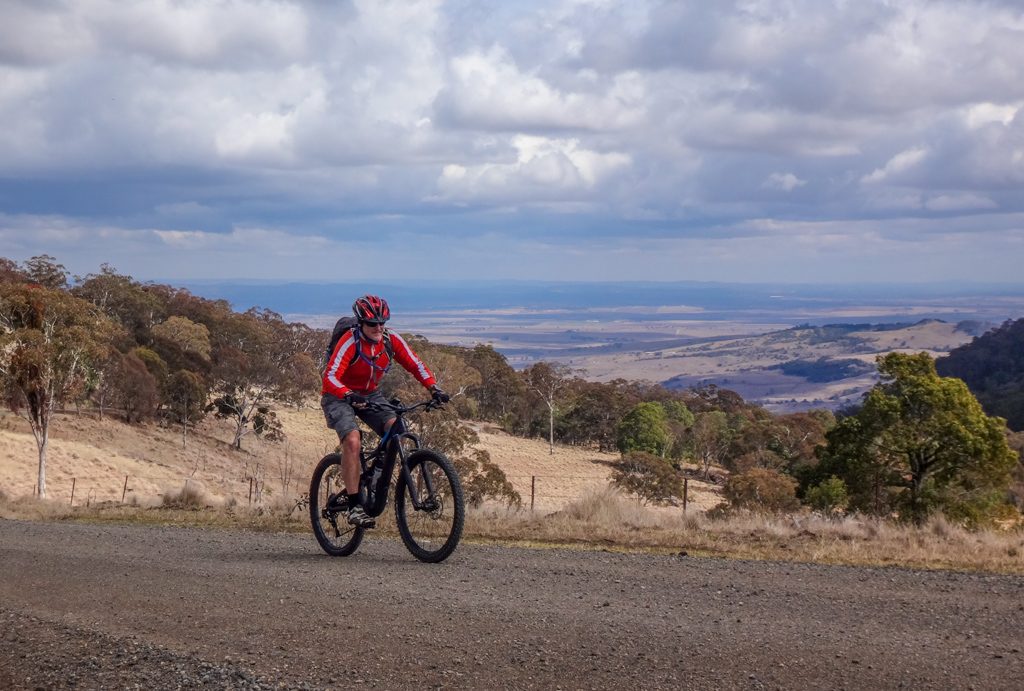 The road grew steep.  The vast plains of the Western Downs spread out behind us as we climbed. 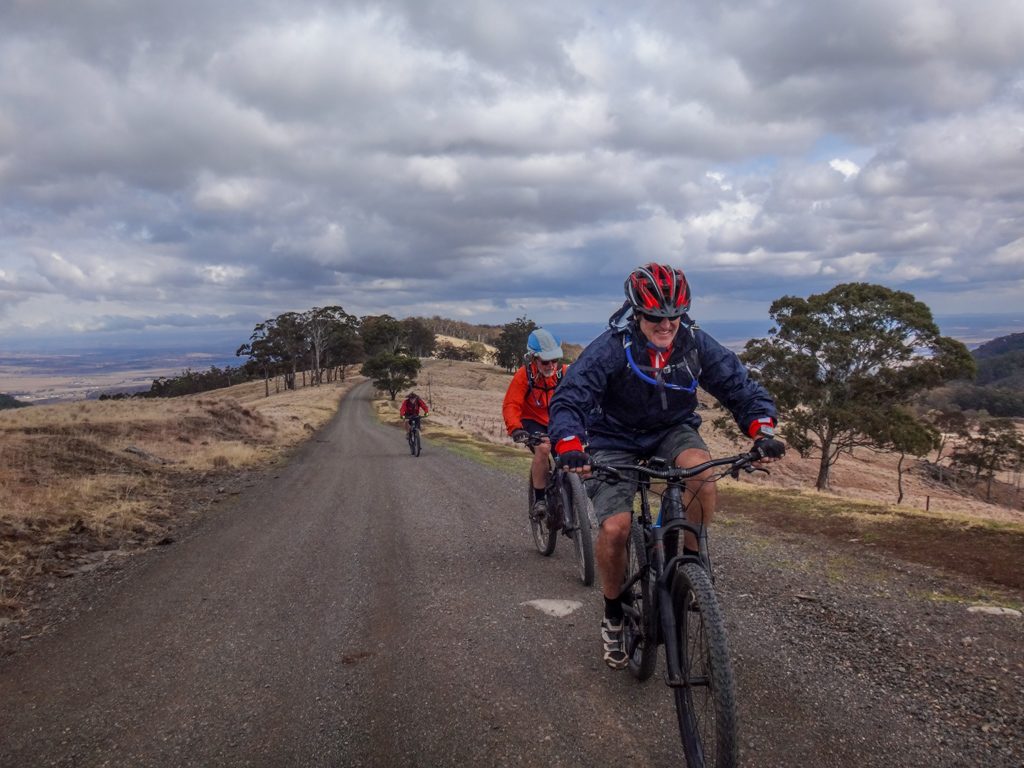 Apart from one short break, we pedaled uphill for over seventeen kilometres. 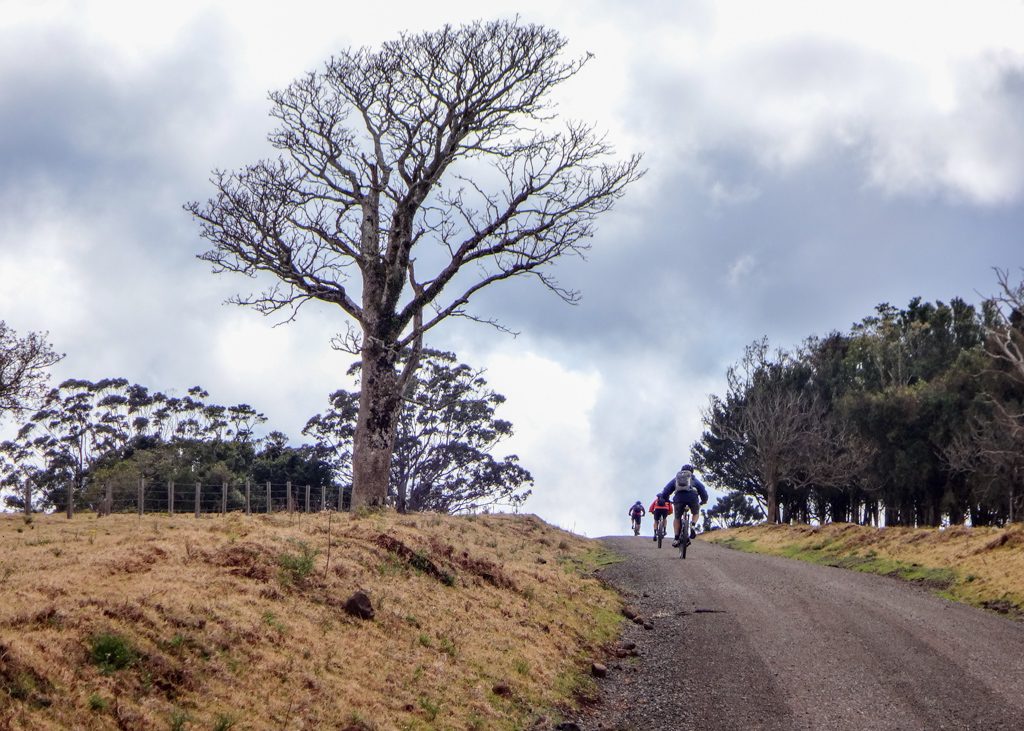 The other riders were quicker than me.  I slowly fell behind.

There was nothing else to do except grind the pedals, and enjoy the view… 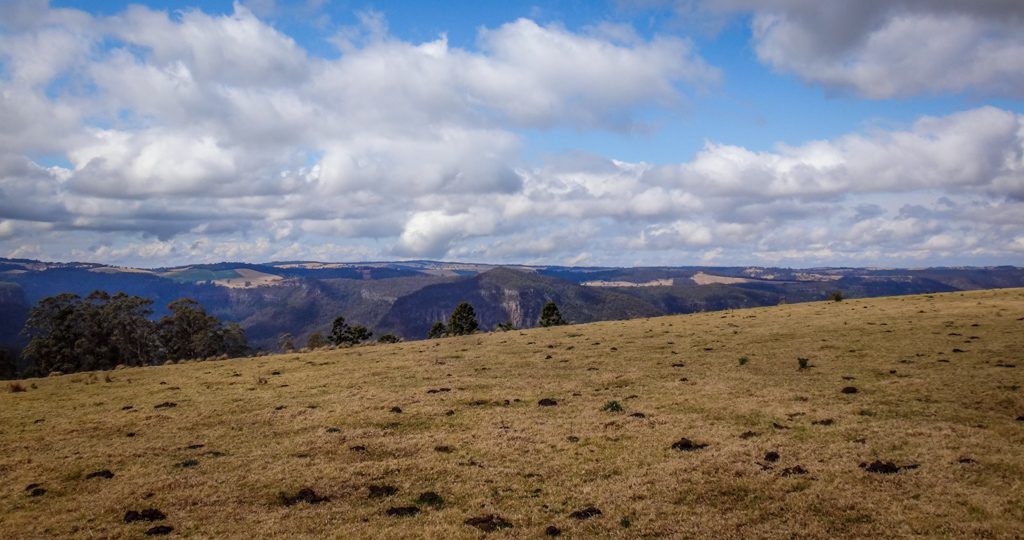 …and the views were impressive.  To my right, the pastures dropped away revealing the craggy edges of Condamine Gorge. 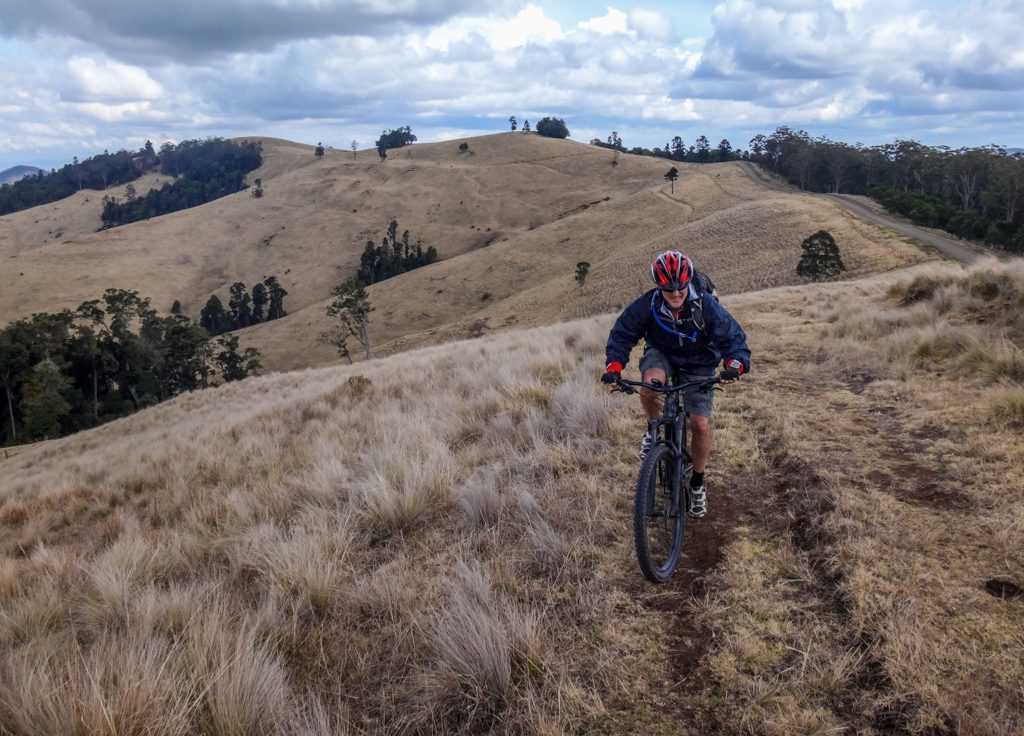 Earlier in the week I’d obtained permission from a local landowner to cross their farm in order to access the national park.

We followed a faint grassy track up the hill. 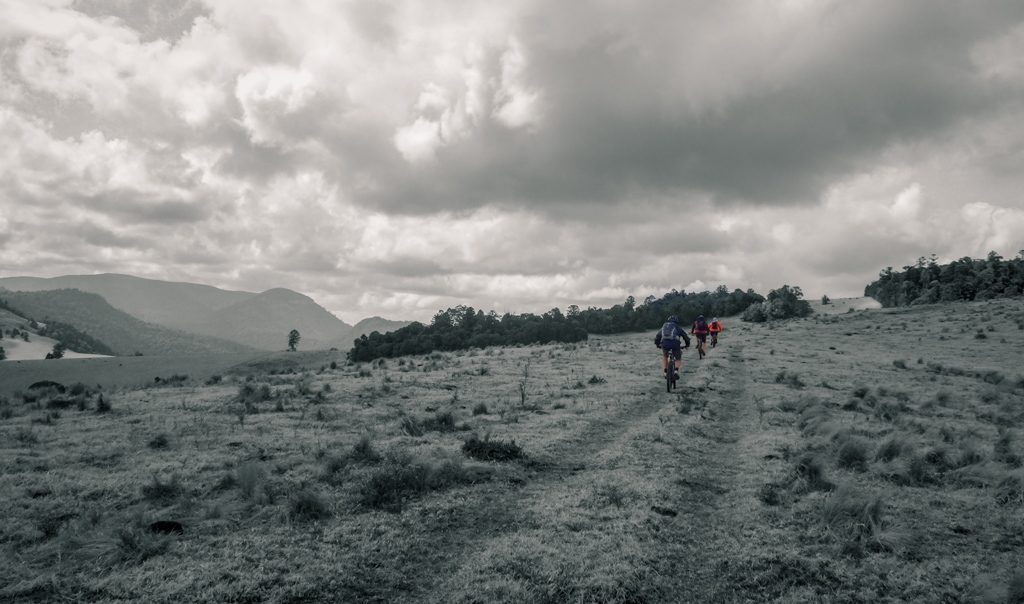 These mountaintop pastures had views in every direction. 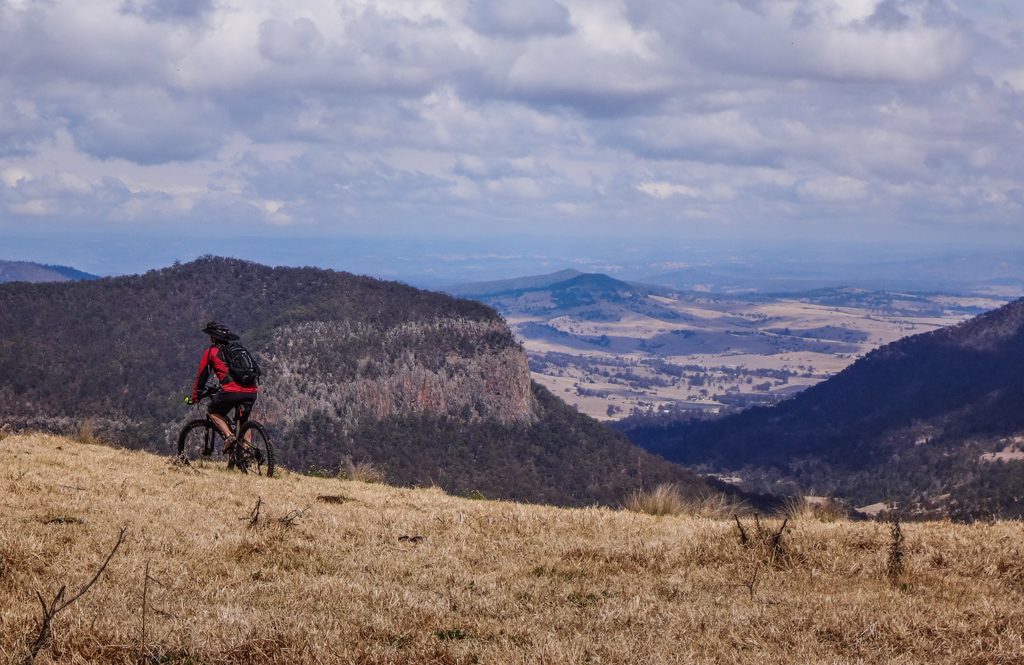 We stopped a few times to admire the panorama. 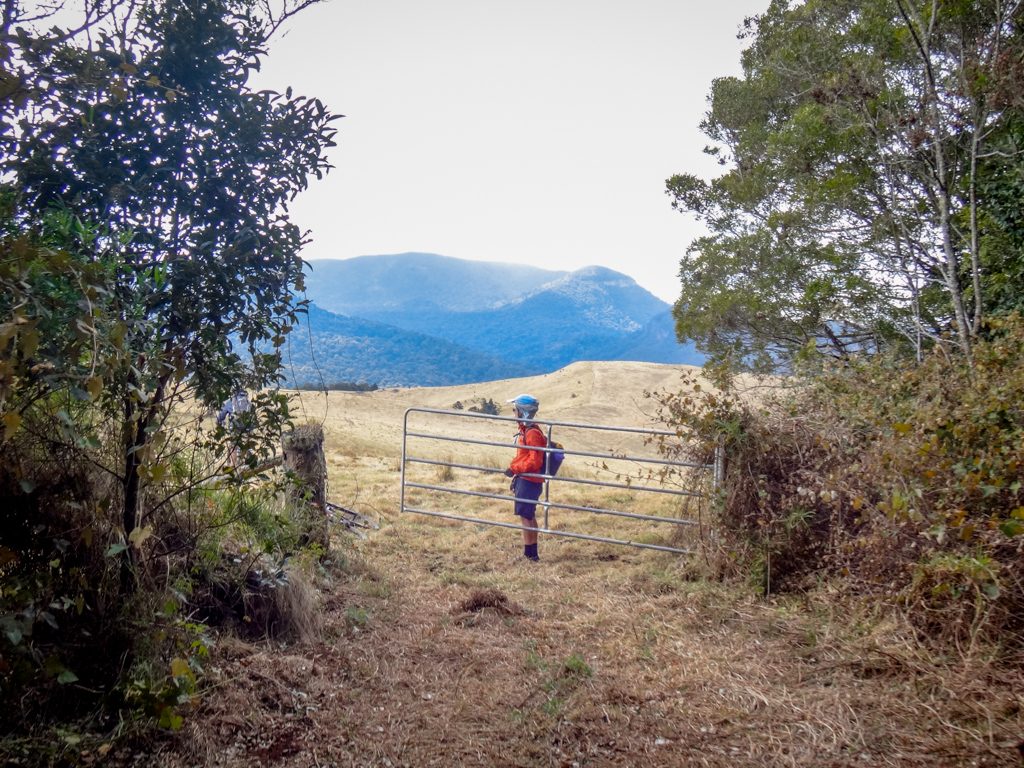 After about a kilometre we left the wide open space of the mountain top paddocks and disappeared into the lush rain-forest. 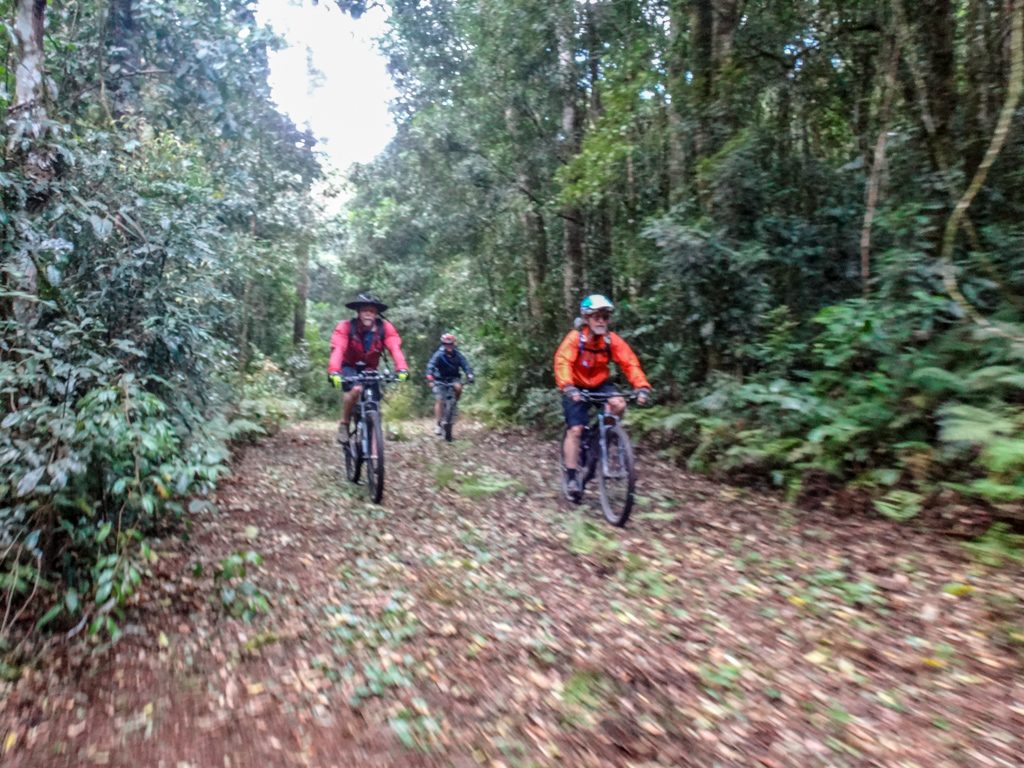 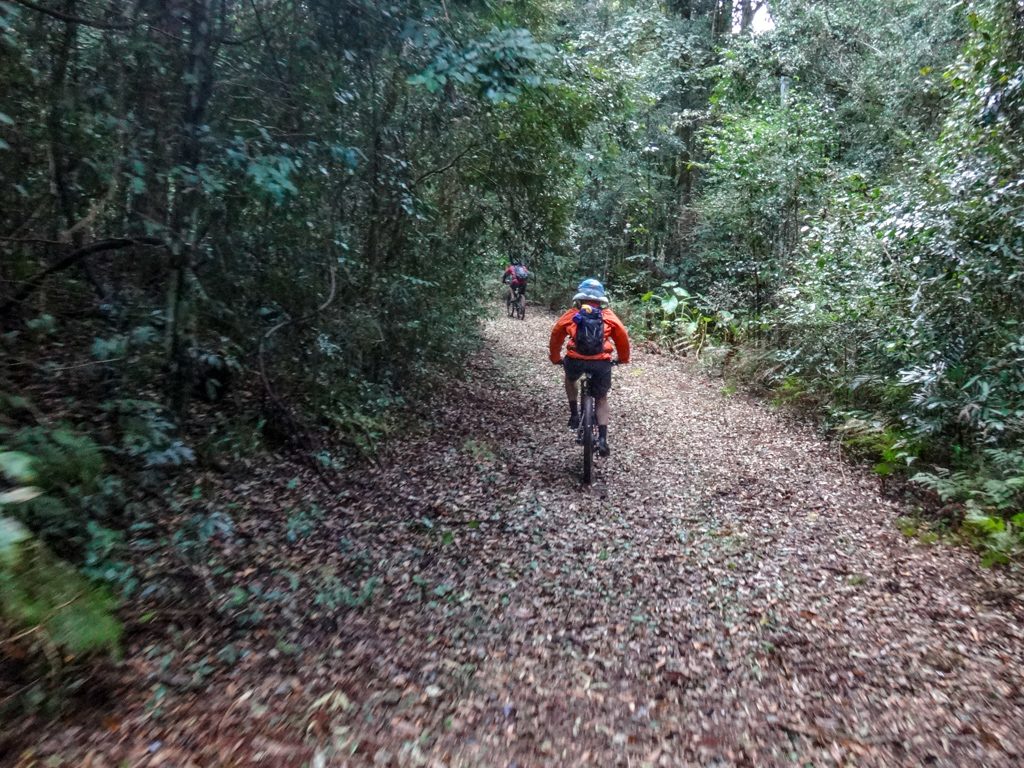 Foliage rushed past in a blur of green as we rolled through the soft leaf litter towards the edge of the plateau. 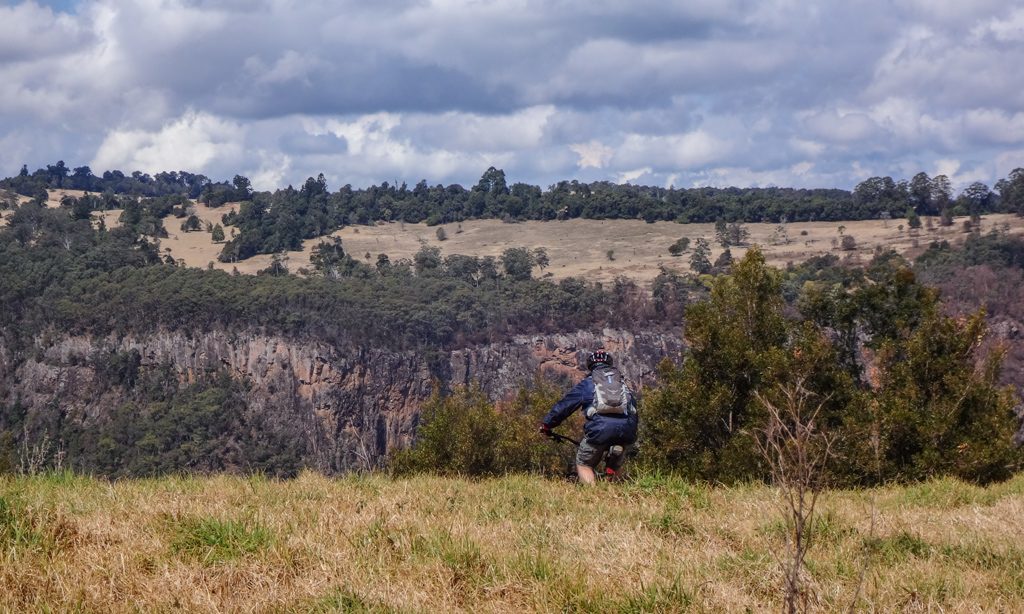 The forest track emerged at a clearing on the edge of the gorge.

From the grassy hilltop we could see down into Condamine Gorge, with thirsty brown pastures lining the hills on the other side. 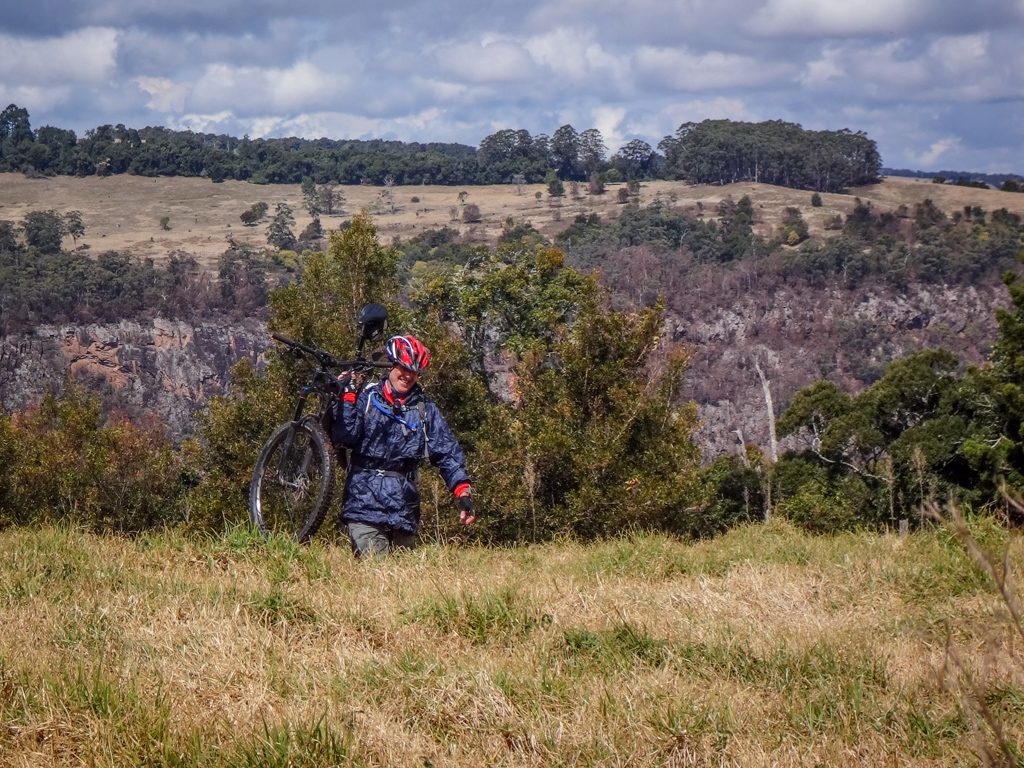 I called out to Nigel, “Don’t get too close!” 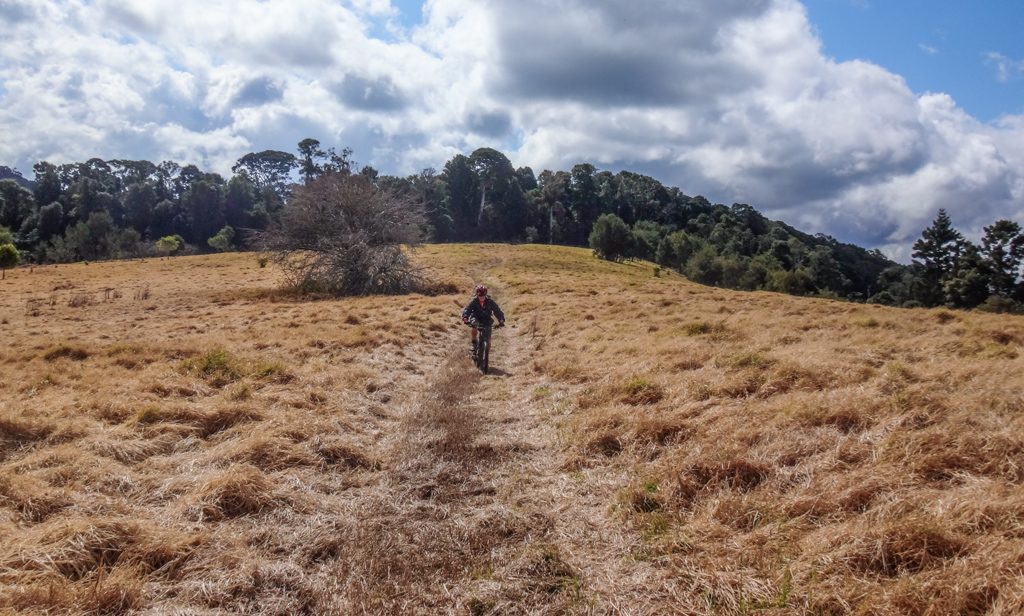 We followed a faint grassy track through the clearing to the far end of the plateau.

The National Park map indicated “Paddy’s Knob” was a few hundred metres ahead. 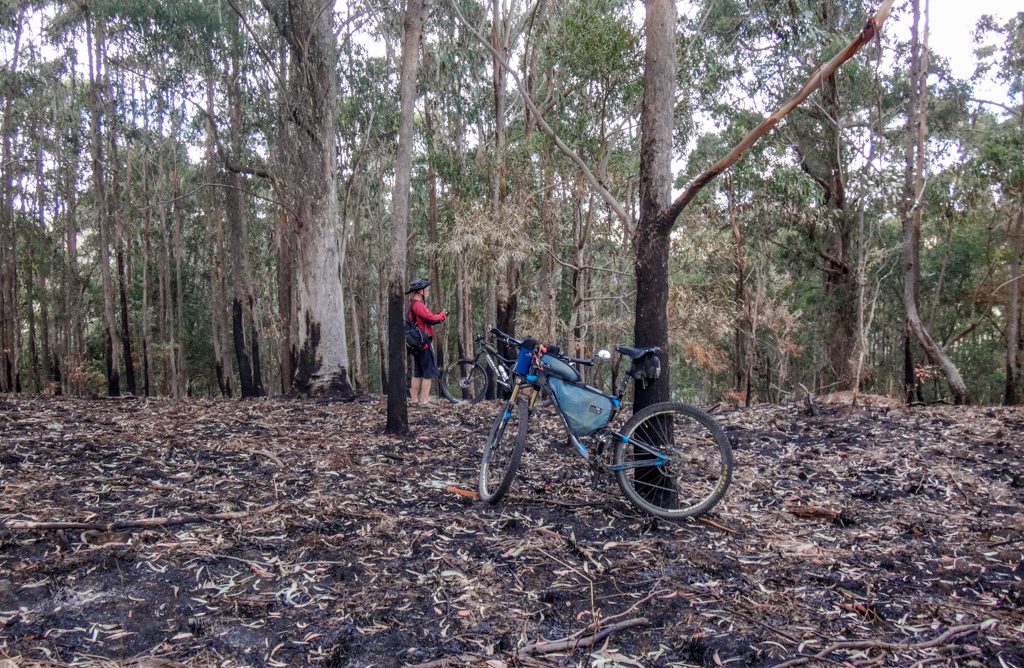 The track ended at a burnt out thicket of trees.

“Is this it?” I said to Eric, disappointed.

It wasn’t until I re-read the National Park information after the ride that I realized we needed to walk a little further on foot.  The website said:

Views of Condamine Gorge can also be seen at Paddys Knob approximately 400 m south-west from the site. 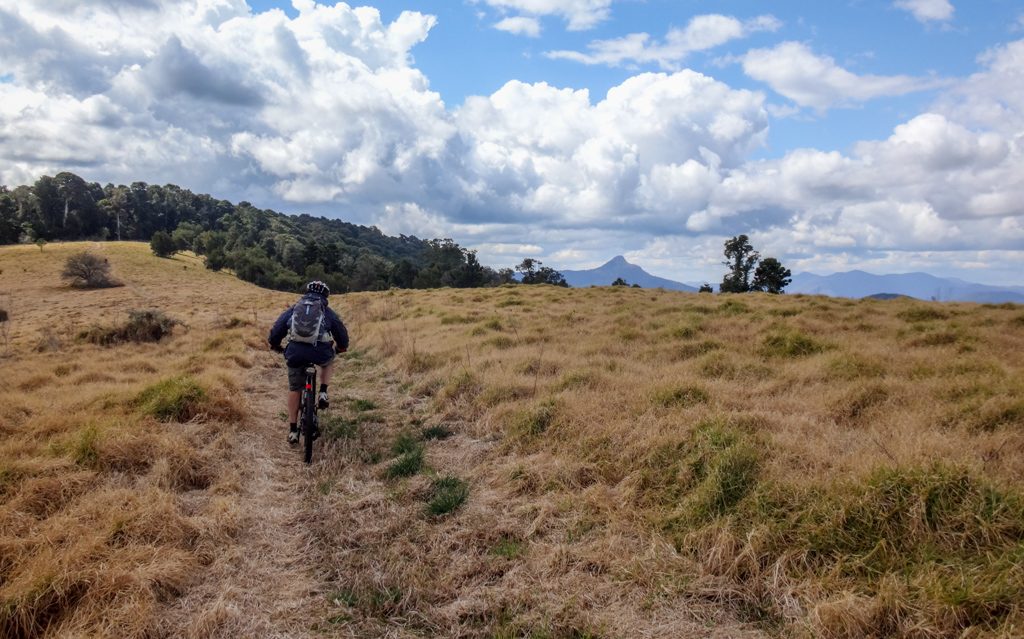 We retraced our steps back to the forest through the thick grass.  Ahead of us, Wilson’s peak poked over the edge of the plateau. 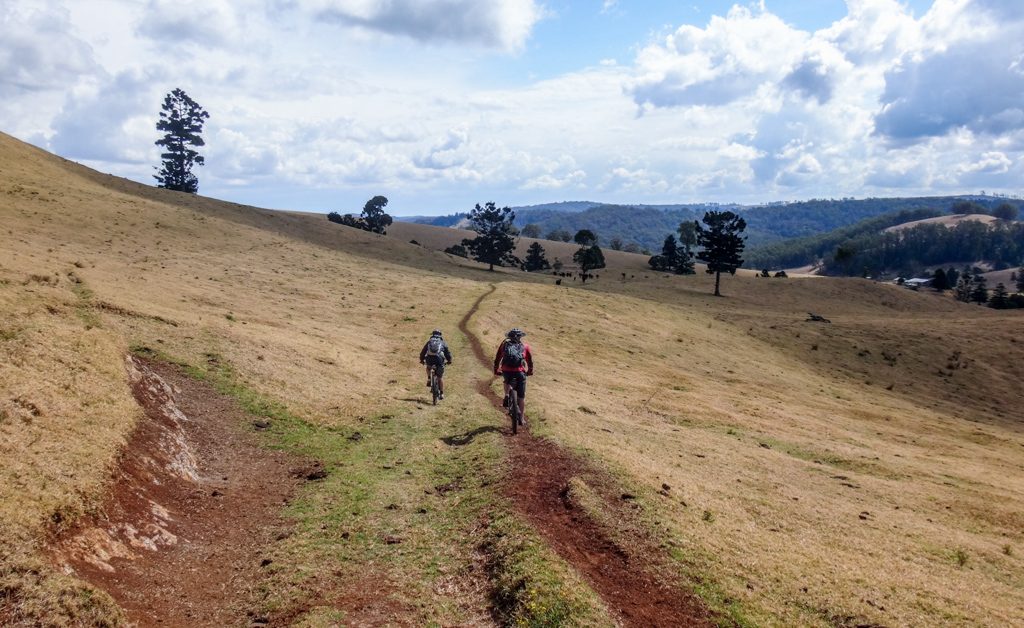 The way back was much easier.

We followed bovine single tracks down the hill, back towards the road. 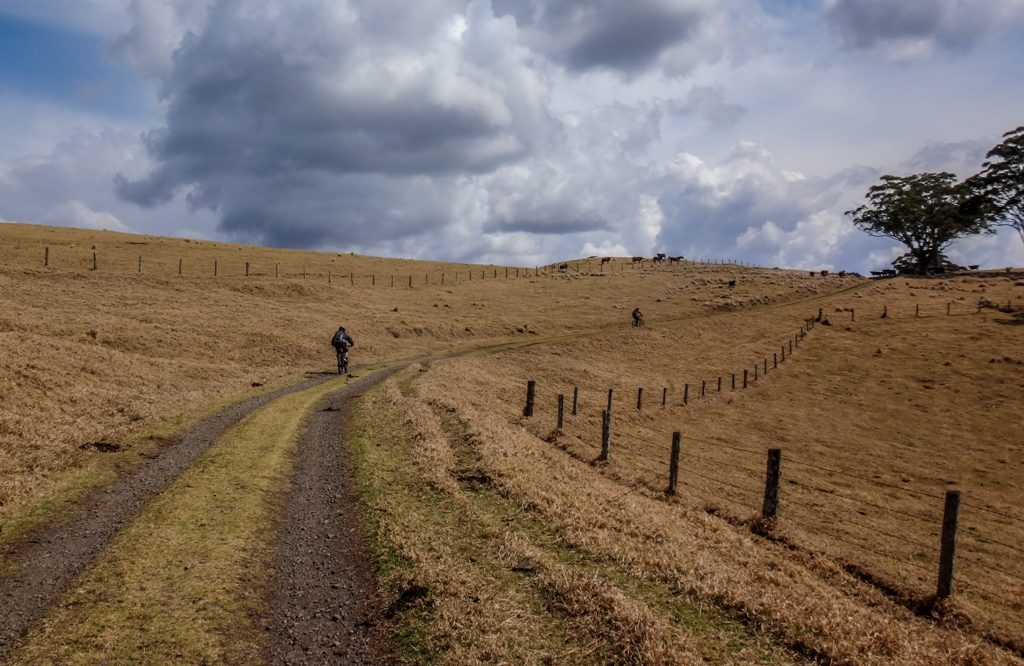 This is a beautiful farm. 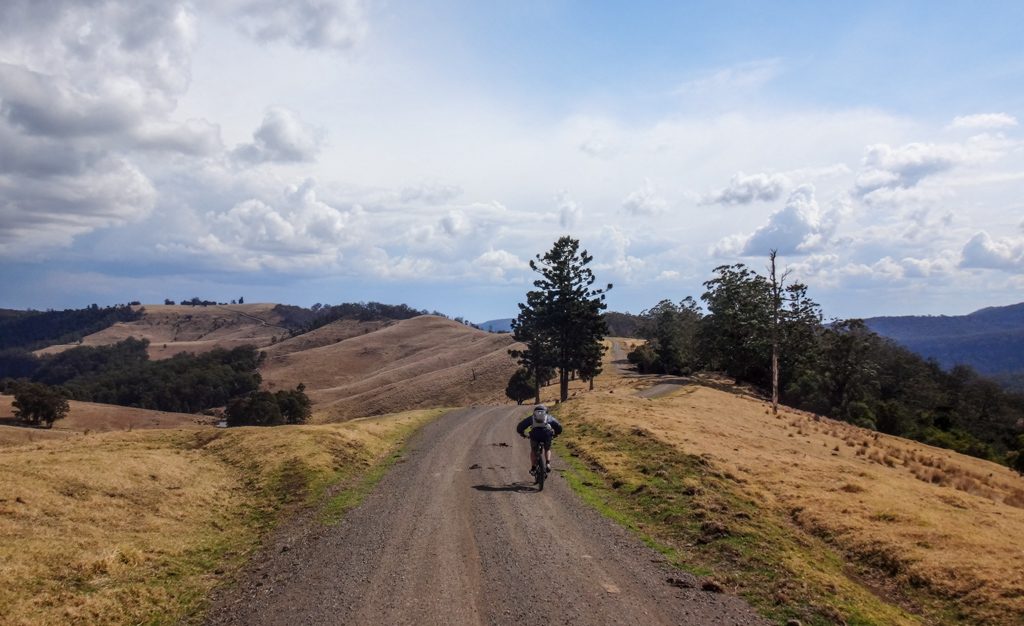 We pedaled back to Gambubal Road.  At over 1,100 metres in elevation, we looked forward to a long, eye-watering descent.

If we were lucky we’d avoid it.

The others accelerated away from me down the mountain.

I kept a light finger on the brake levers to check my speed, and enjoyed the scenery as it rushed by. 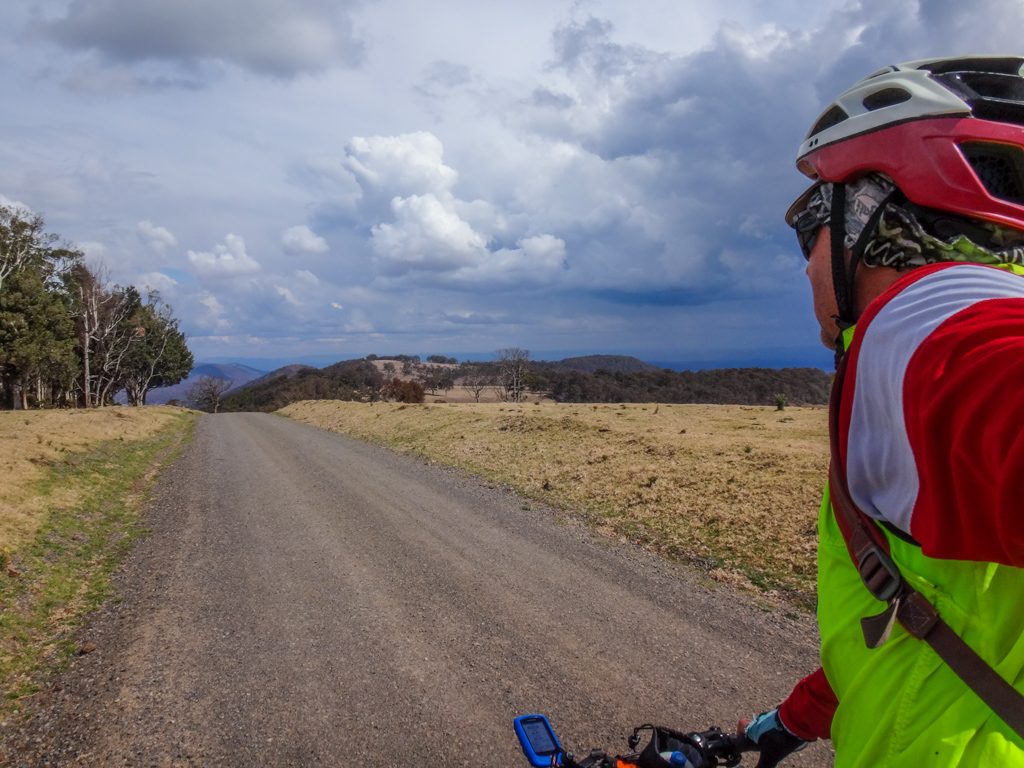 Places like this remind me that the actual destination is only a small part of the adventure.

Most of the fun is actually in traveling there (and back).

We rode almost forty-five kilometres in just over four and a half hours.

During that time we climbed about 1,300 metres in elevation, and I burned about 2,500 kcal.

Because of initial seventeen kilometre climb at the start, and the soft trails at the top, I’ll rate this one 9 out of 10 on the tough-o-meter.

Thanks Eric, Jason, and Nigel for a fun day out.