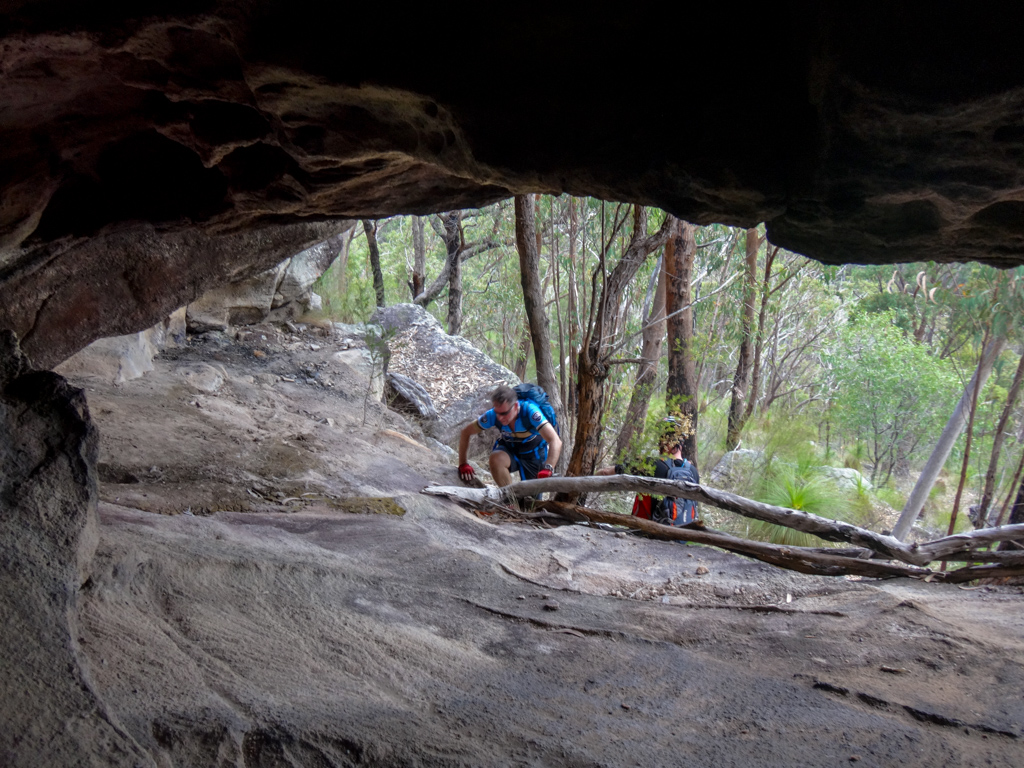 Today’s adventure took us on a fun-filled loop through Plunkett Regional Park, visiting several caves and lookouts while negotiating some steep ups and downs. 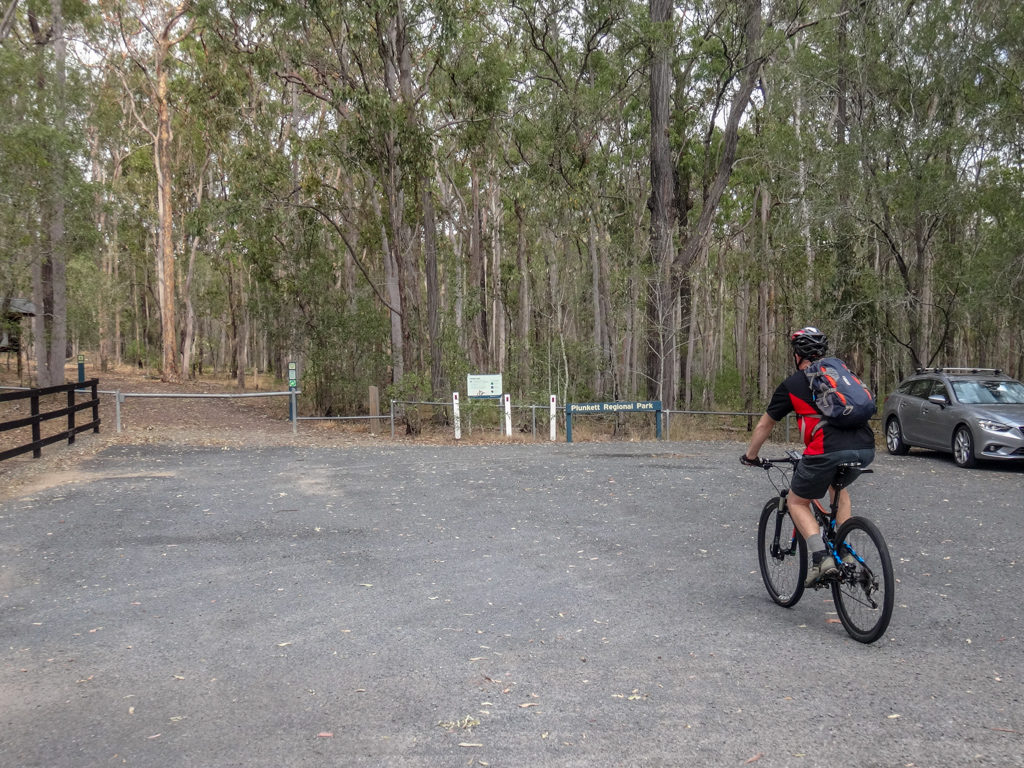 Plunkett is located in the Albert River Valley, part-way between Beenleigh and Beaudsert. 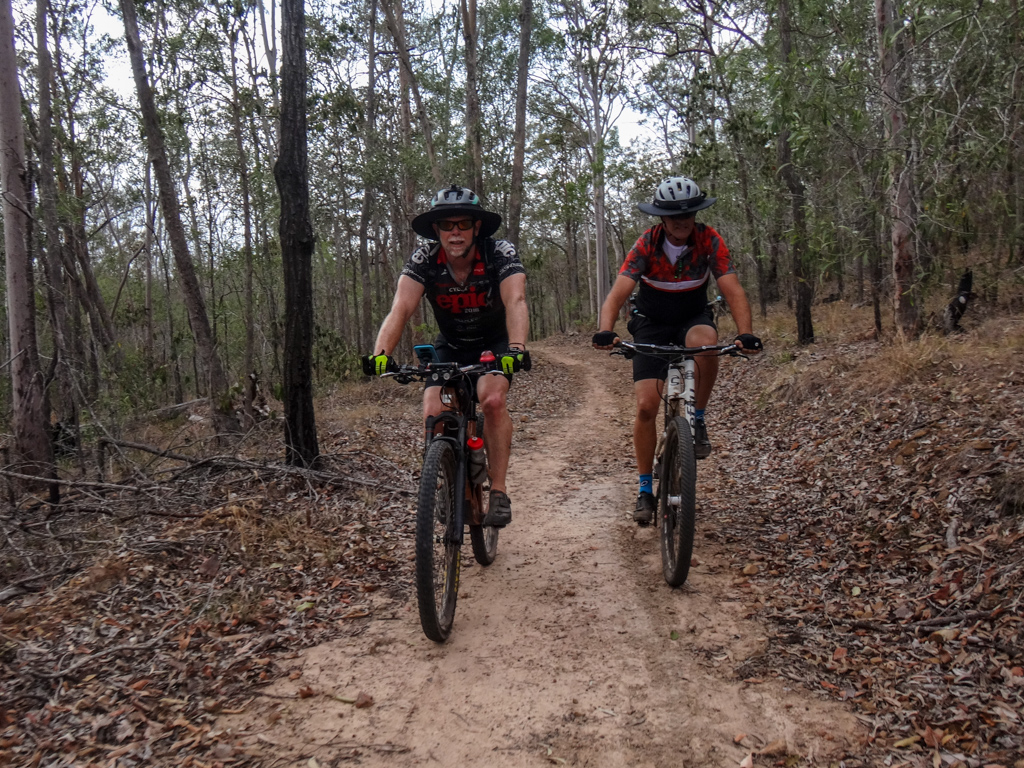 A couple of us explored here a few years ago, but I thought it would be fun to revisit the area and bring a few more friends.

We followed a trail as it snaked up the hill…

I seem to be doing that a lot these days.  Jason reckons I should ride my bike more during the week.  I think he has a point.

At the top of the hill, we leaned the bikes against some trees and scrambled up towards “Black Rock”. 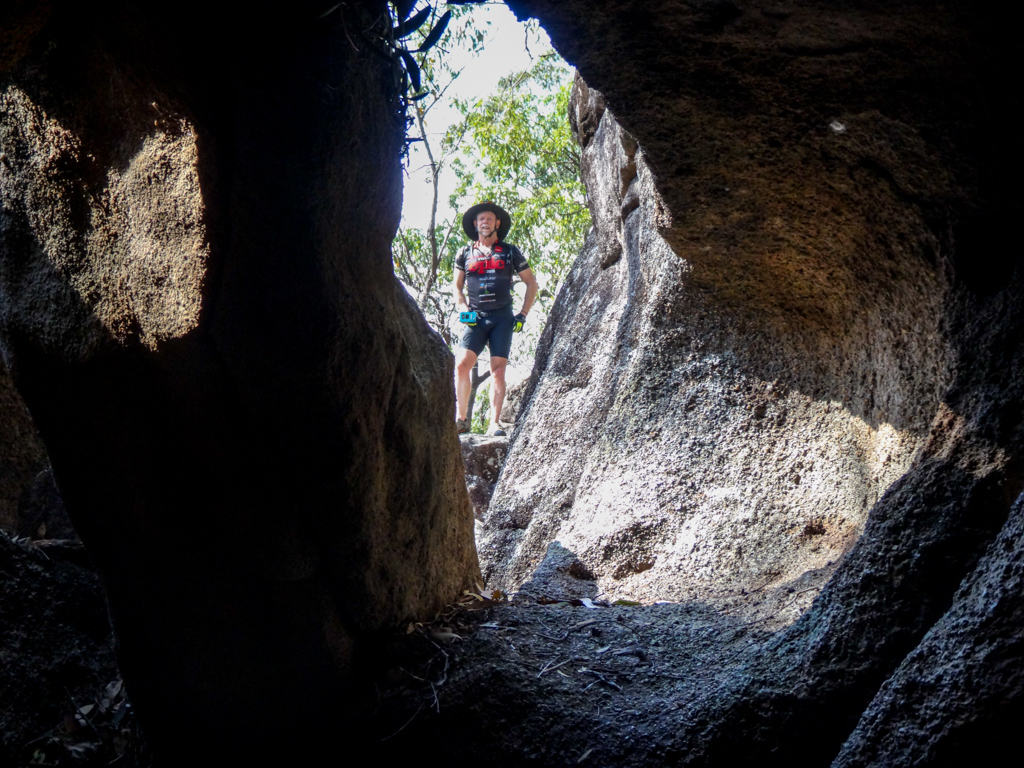 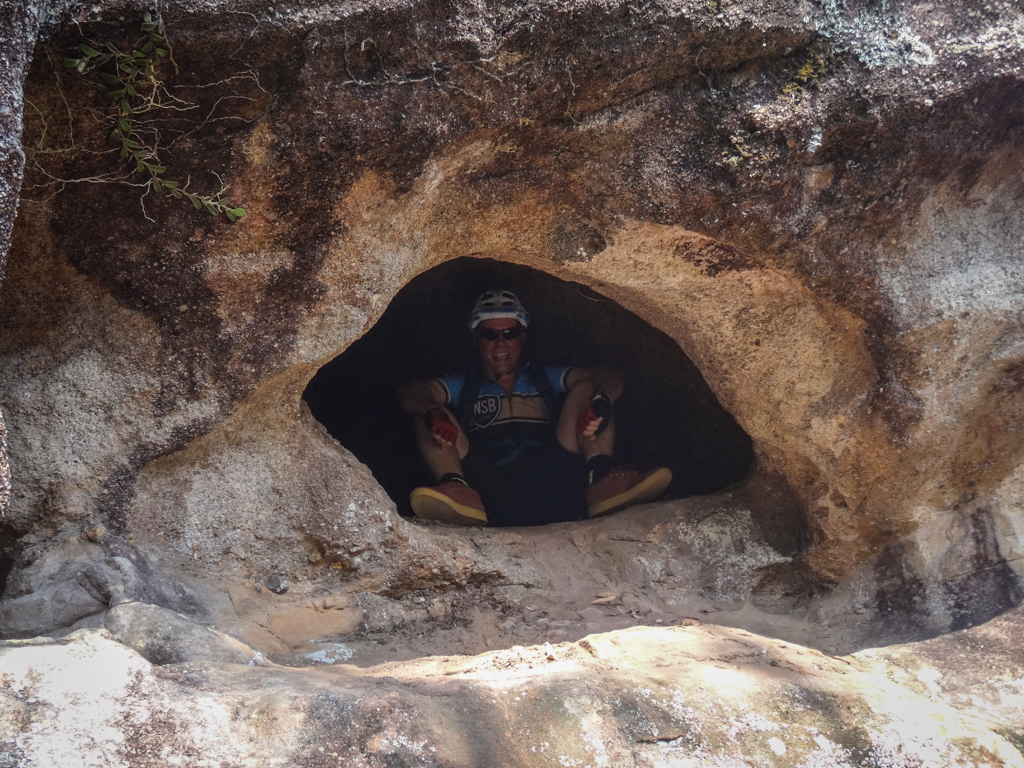 Our first cave of the day was an impressive little nook which was barely large enough for one person. 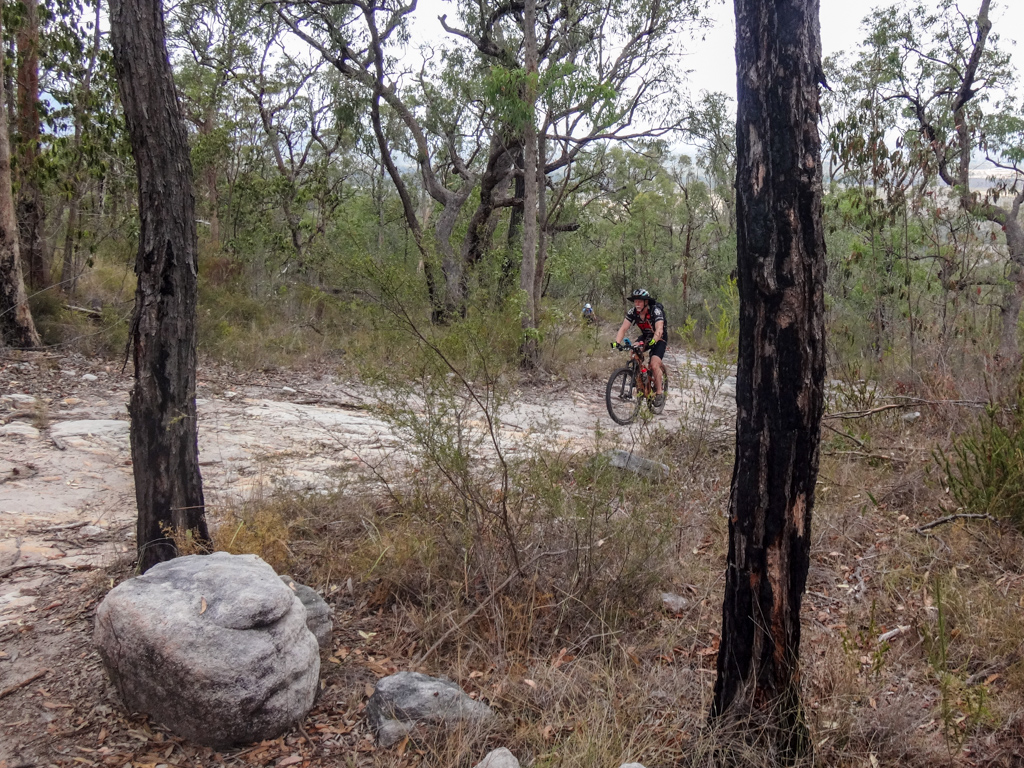 We left the cave and skirted around the other side of the peak. 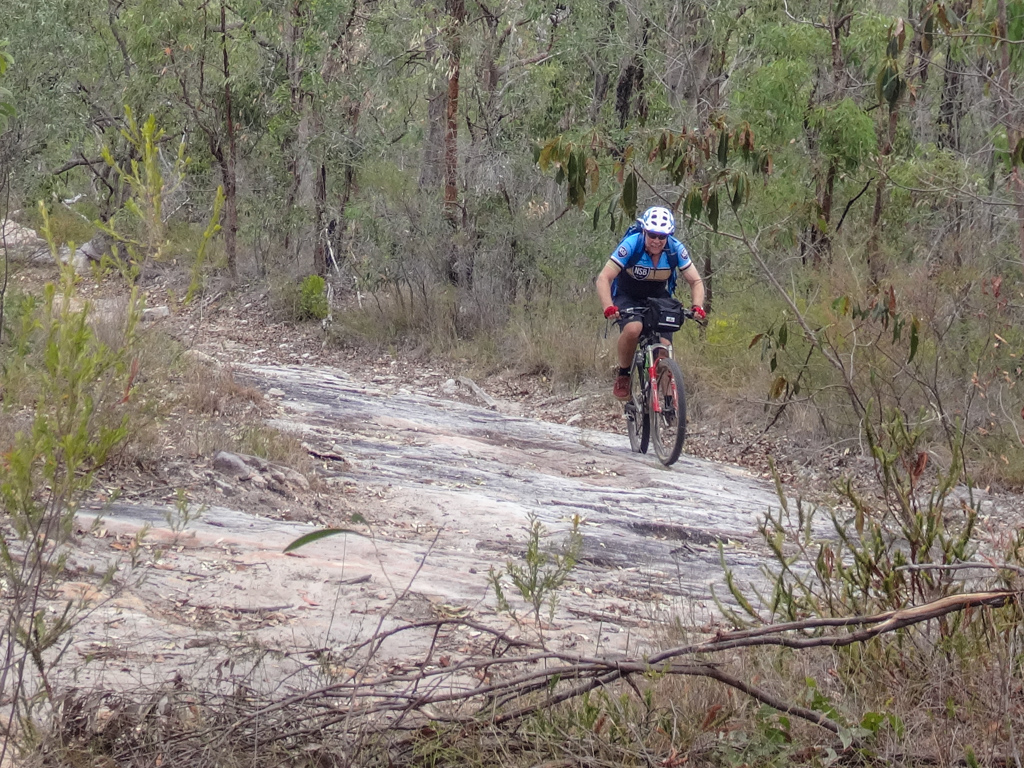 It was naturally paved with granite. 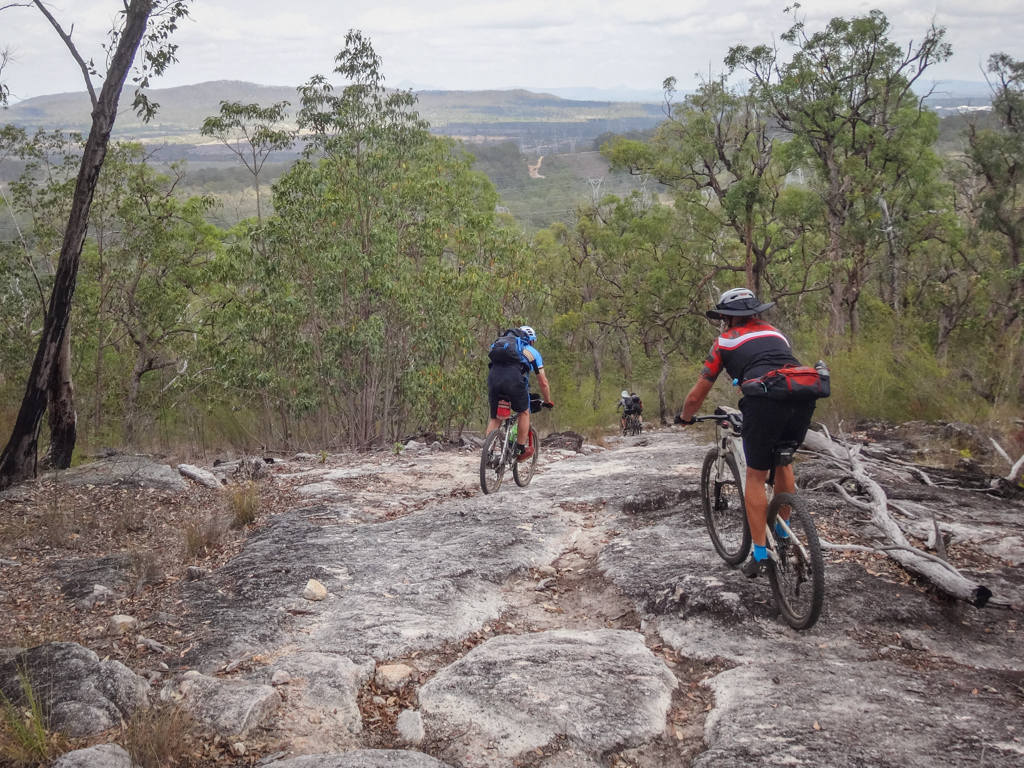 Mountain bikers call this stuff “Slick Rock”, and love it.

Our tyres gripped it tightly, and we were able to go up and down steep surfaces without slipping at all. 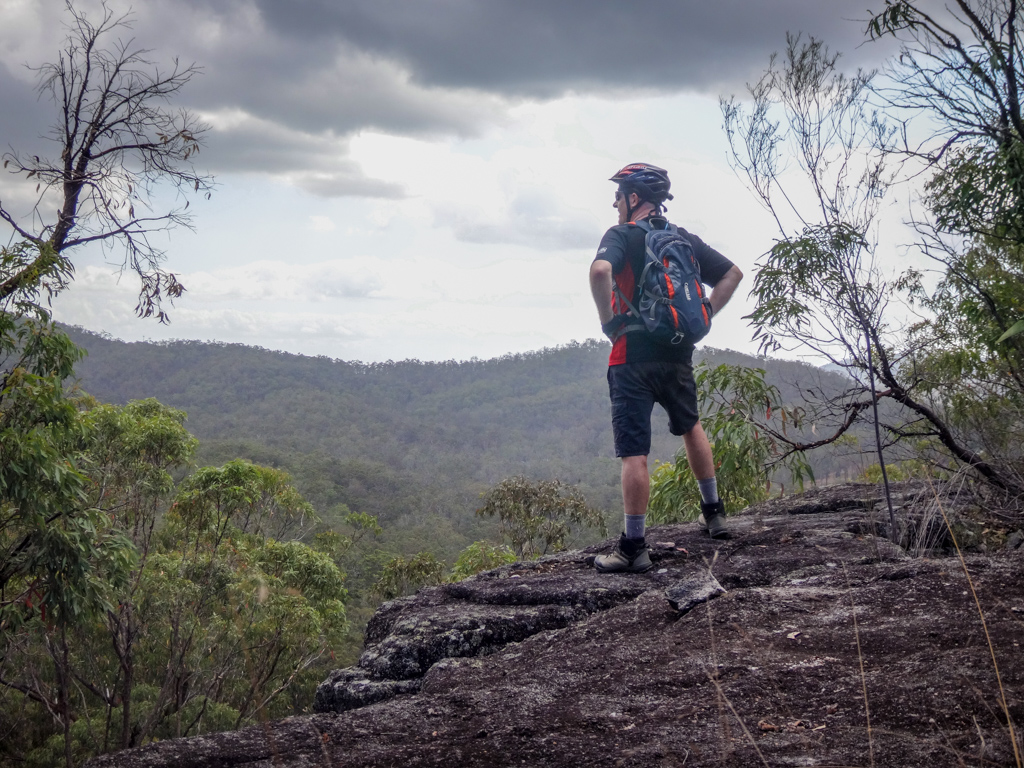 A few minutes later we found ourselves at an escarpment overlooking a green valley. 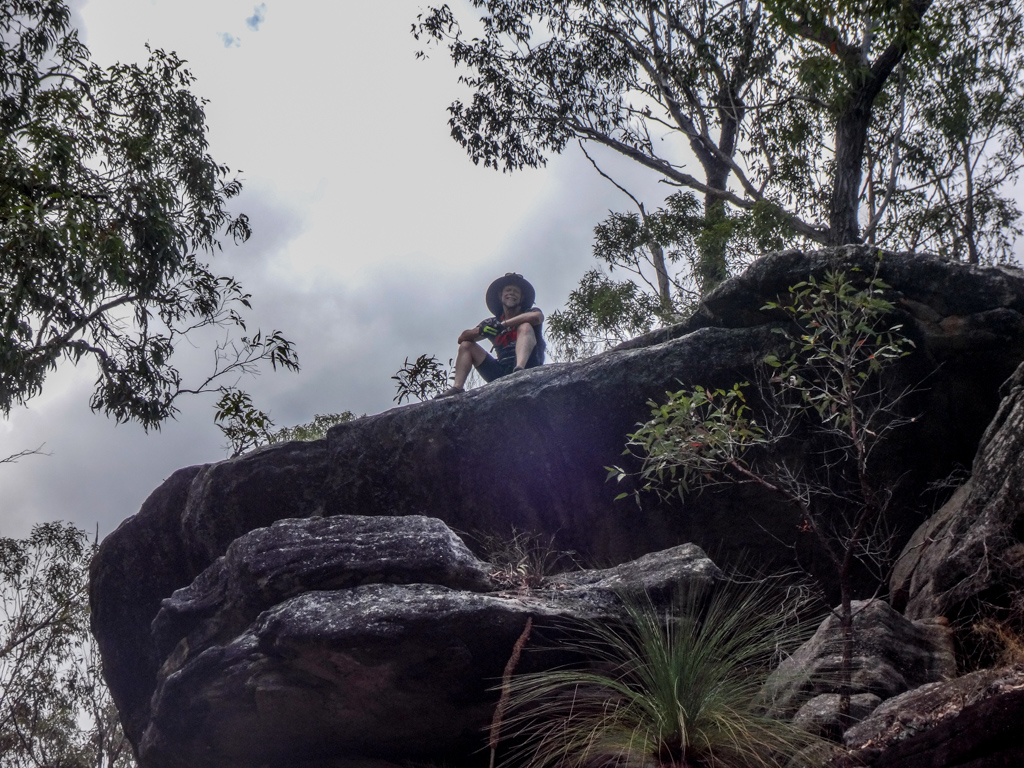 Jason sat atop a huge boulder while a few of us went looking for another cave.

This invoked scrambling along the base of a cliff, winding our way around grass trees on a steep slope. 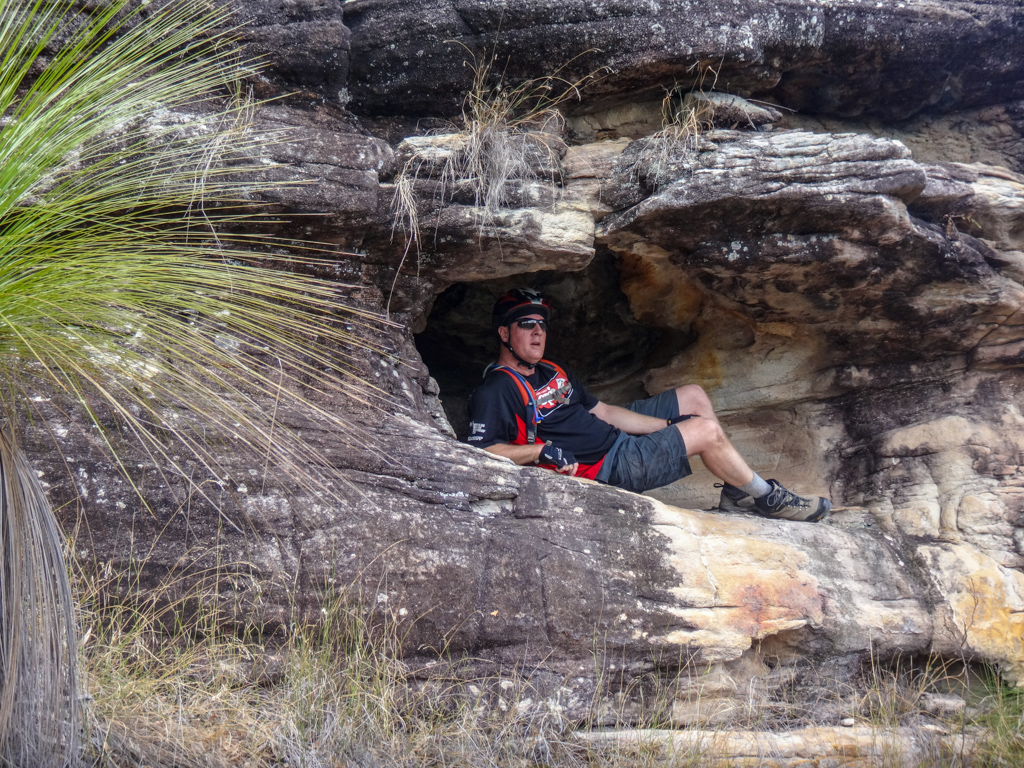 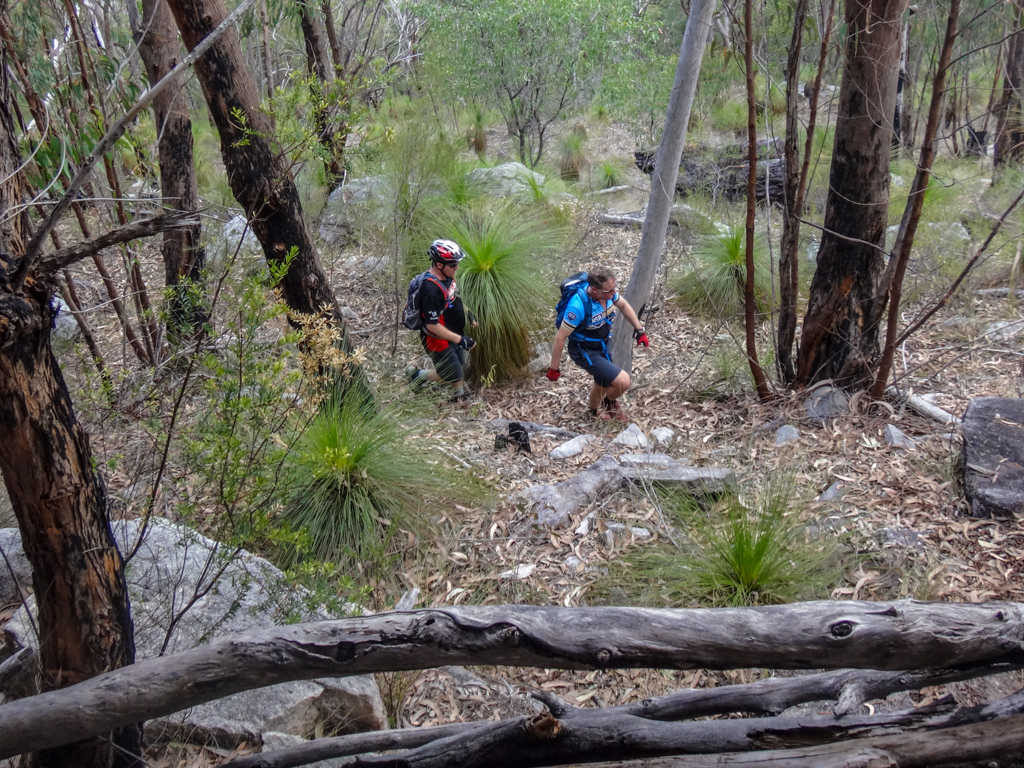 We continued along the cliff base for a while longer. 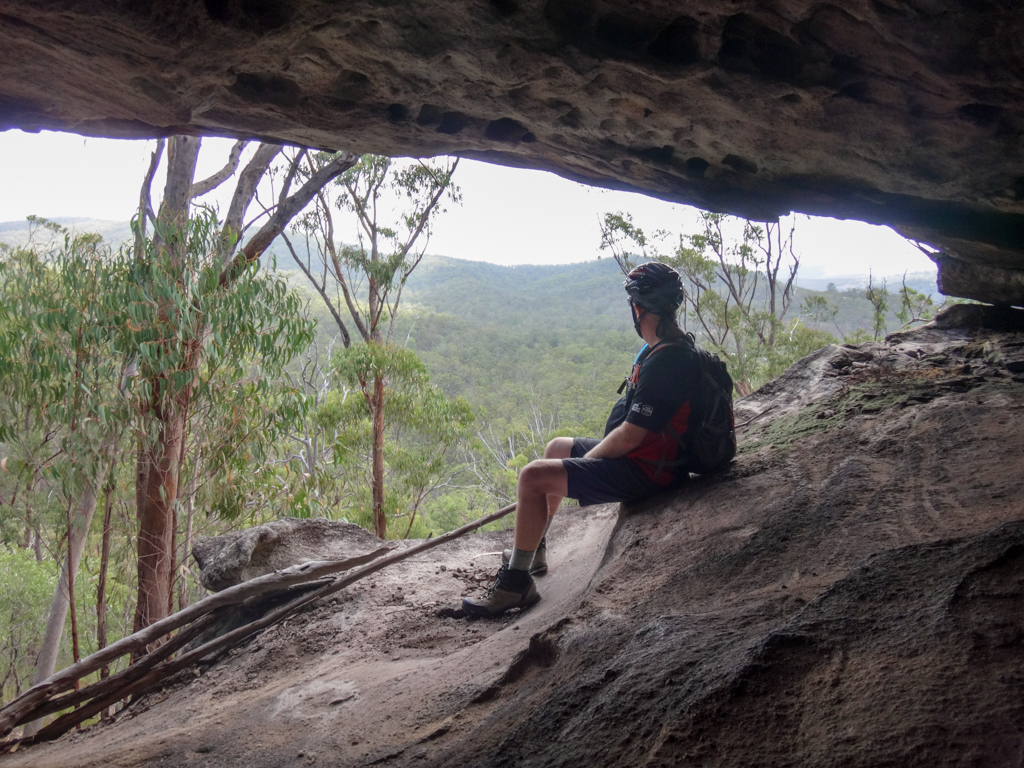 Eventually we found it – a beautiful big cave gouged out of the cliff face. 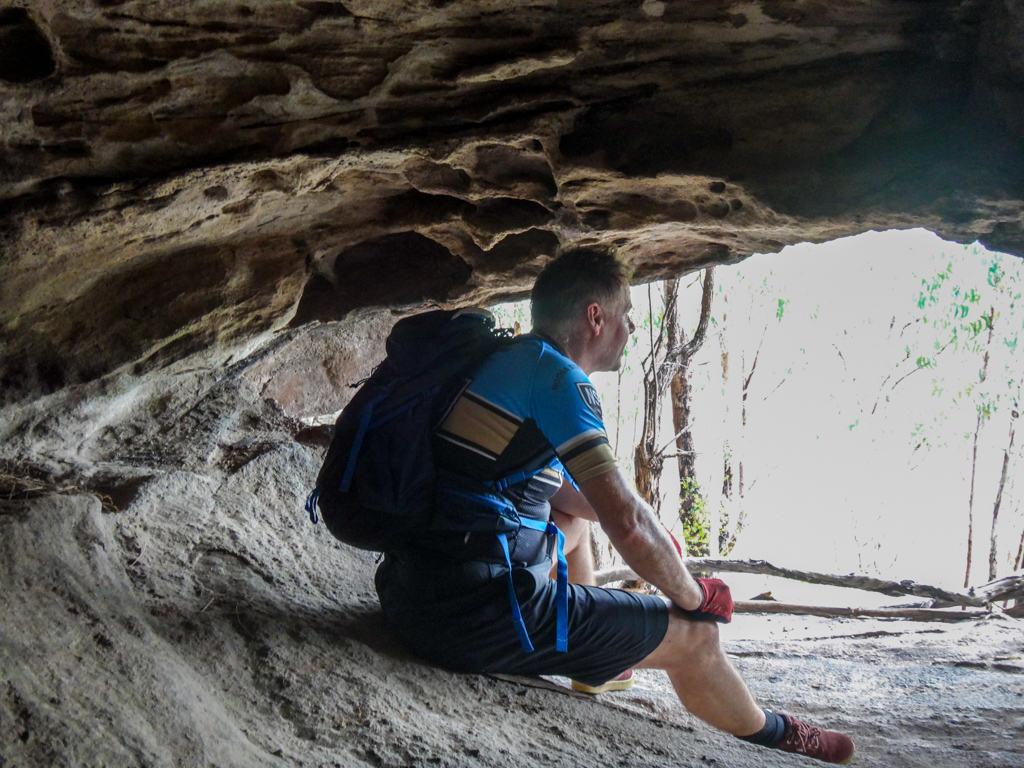 We crawled inside, feeling very pleased with ourselves.

This must have been what Fred Flintstone felt when he found that first cave for Wilma. 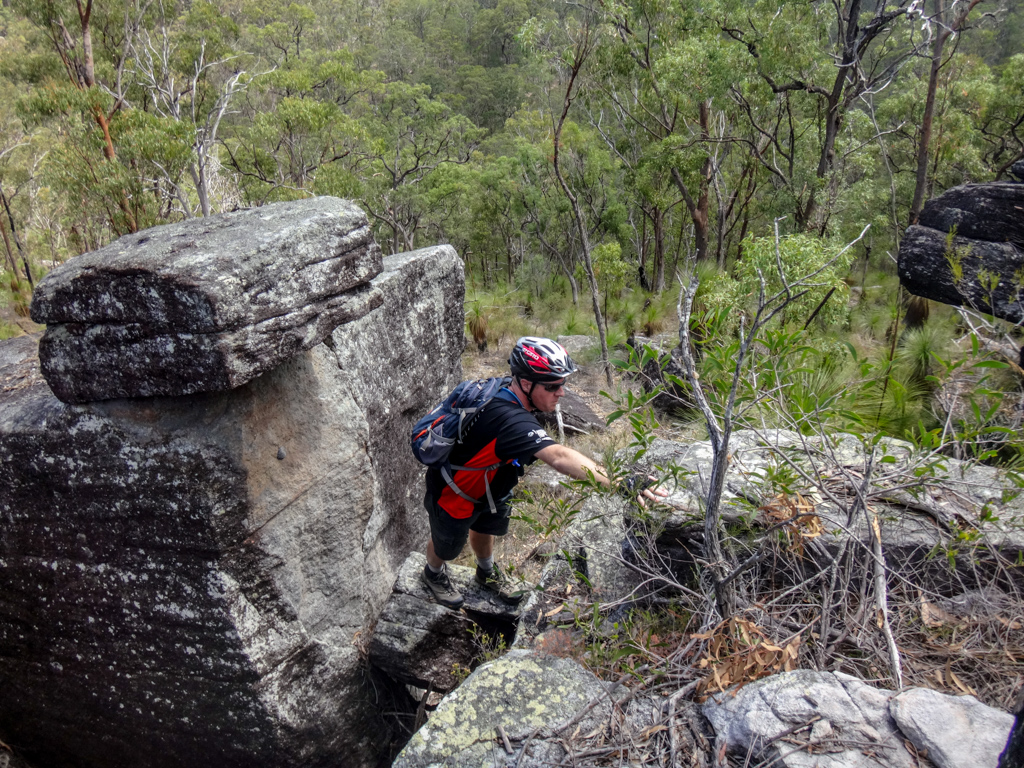 It was a tricky scramble over huge boulders to get back to the bikes – especially in cycling shoes.

We made it back without any incidents.

We followed the ridge south, gently climbing to the high-point of the day. 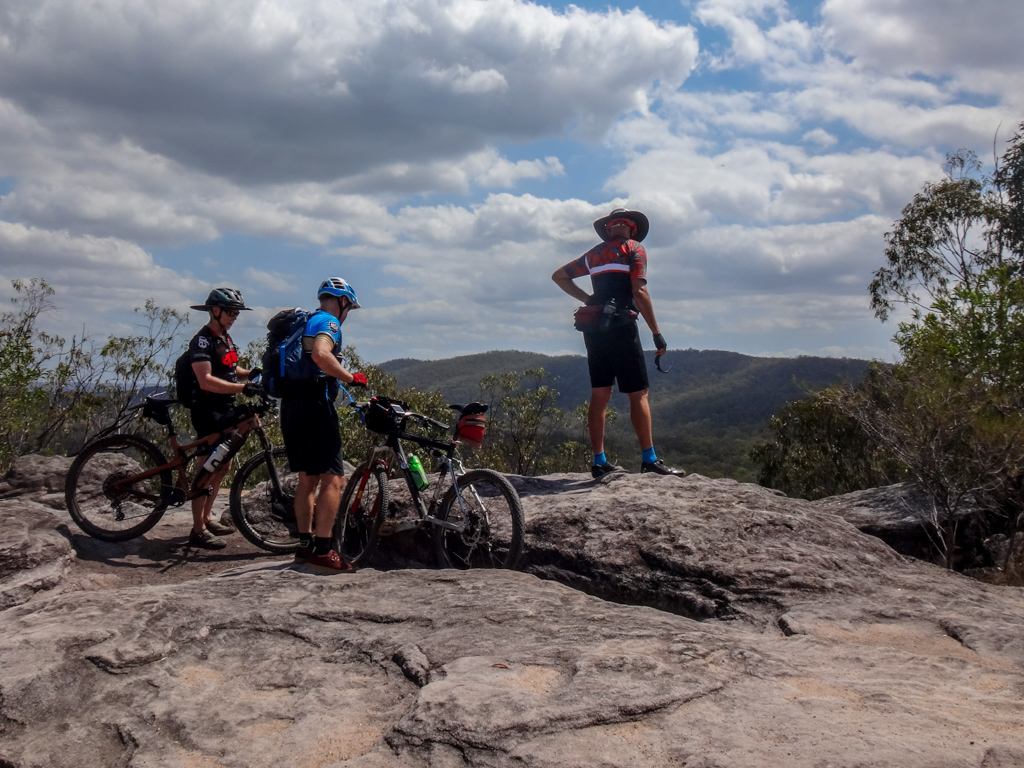 We took a quick break and enjoyed some great views down the valley from Wickham’s Peak .

From there we took a steep descent down the “On Edge” trail towards the northern section of the park. 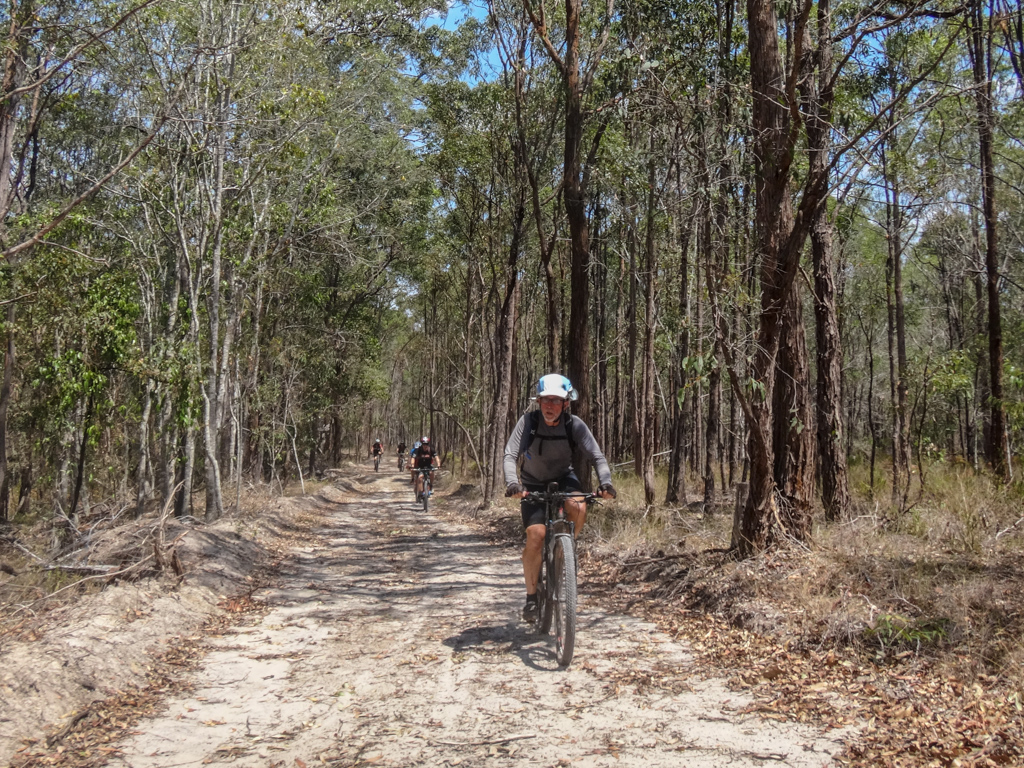 (Photo: Jason Grant)The tracks at the bottom of the hill were flat and sandy.  We followed one named “Cave Track”.  I wonder where it led? 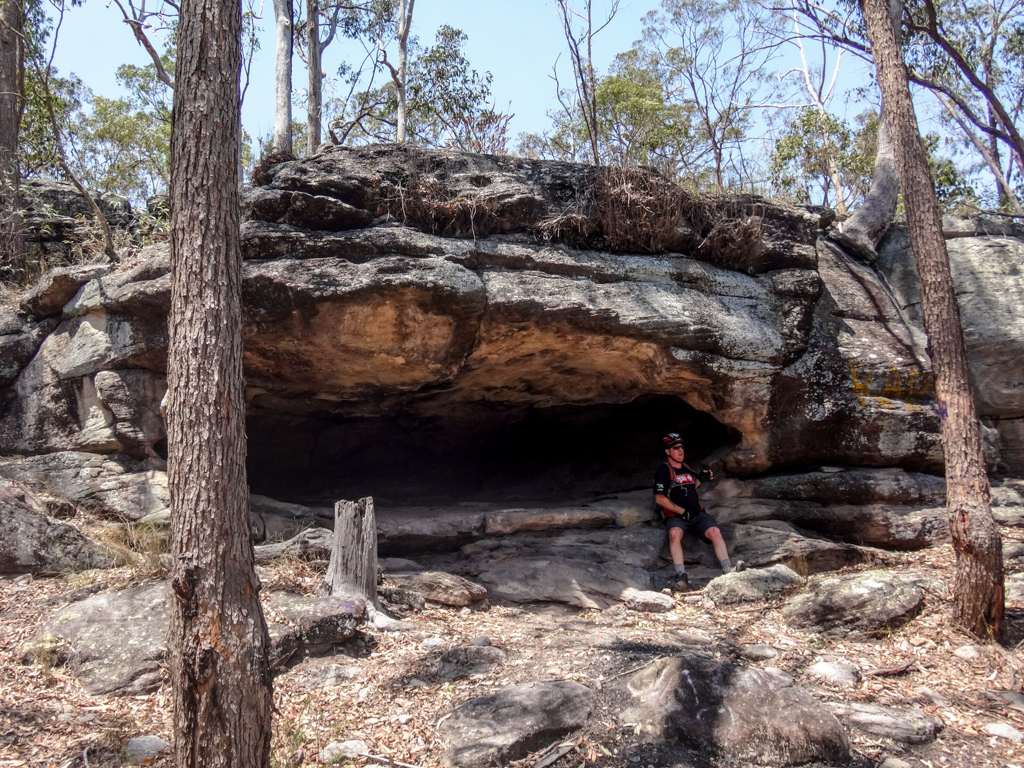 Our final cave of the day was more of an over-hang than a cave.  We stopped to admire it for a while and catch our breath. 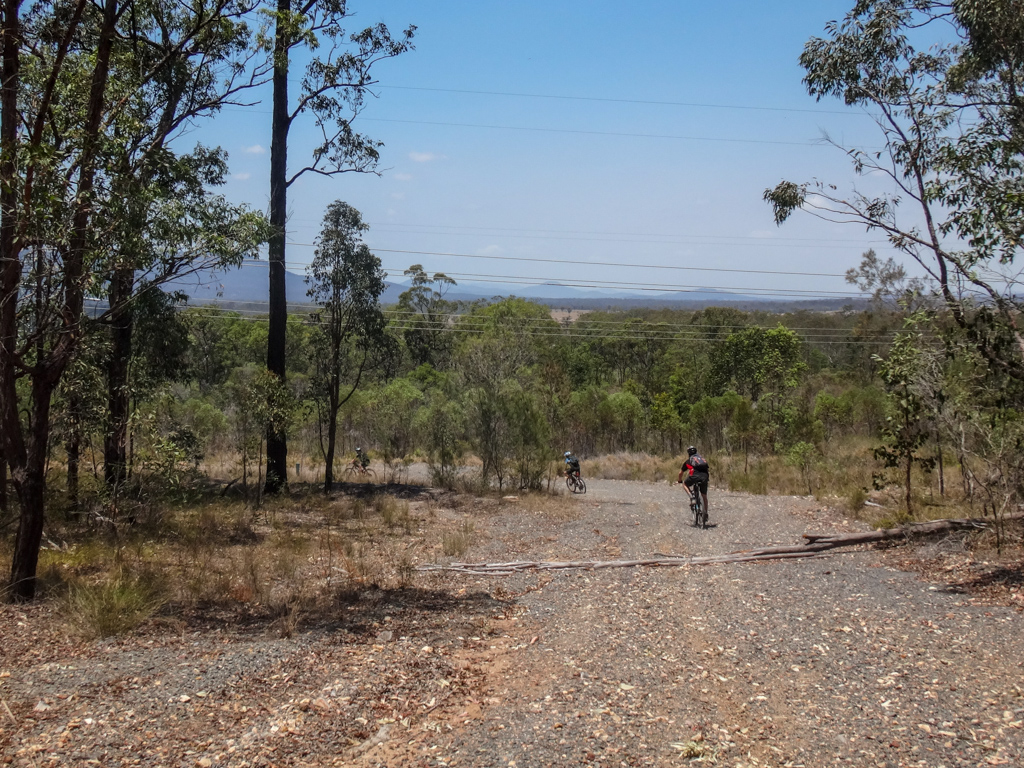 Eric tells me he doesn’t like following tracks under power lines because they’re often steep – going up and down as they follow the pylons between hilltops.

I agree. We “undulated” for a few kilometres as we traced around the southern boundary of the park. 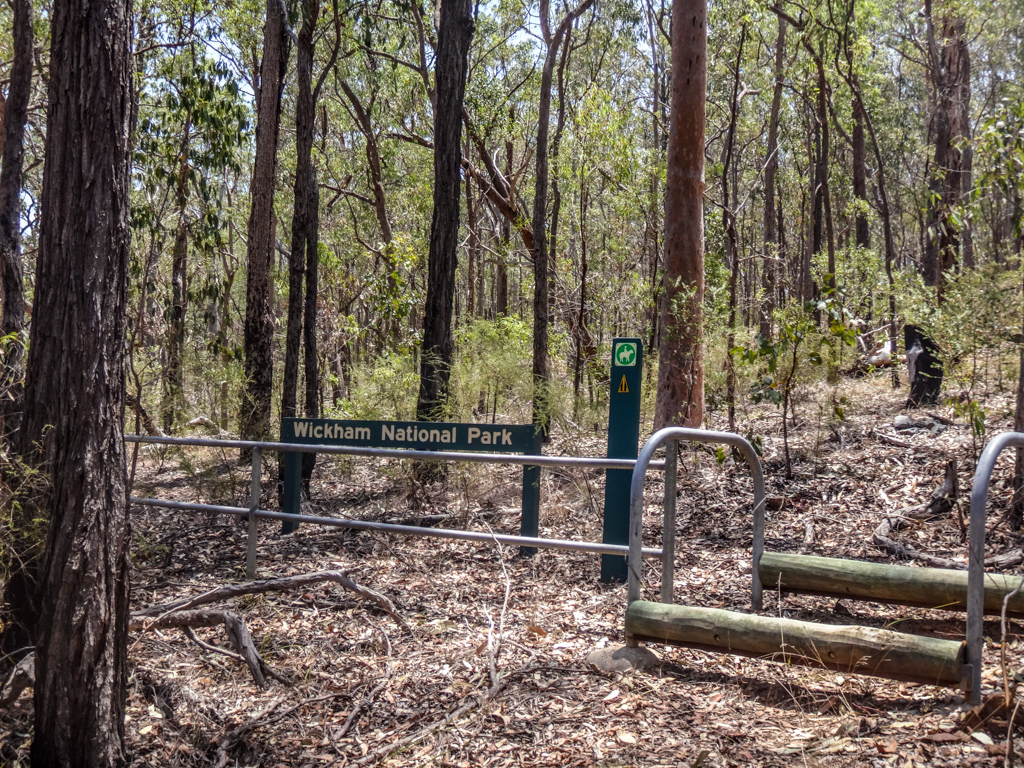 We crossed into Wickham National Park – a tiny national park on the southern slopes of the range. 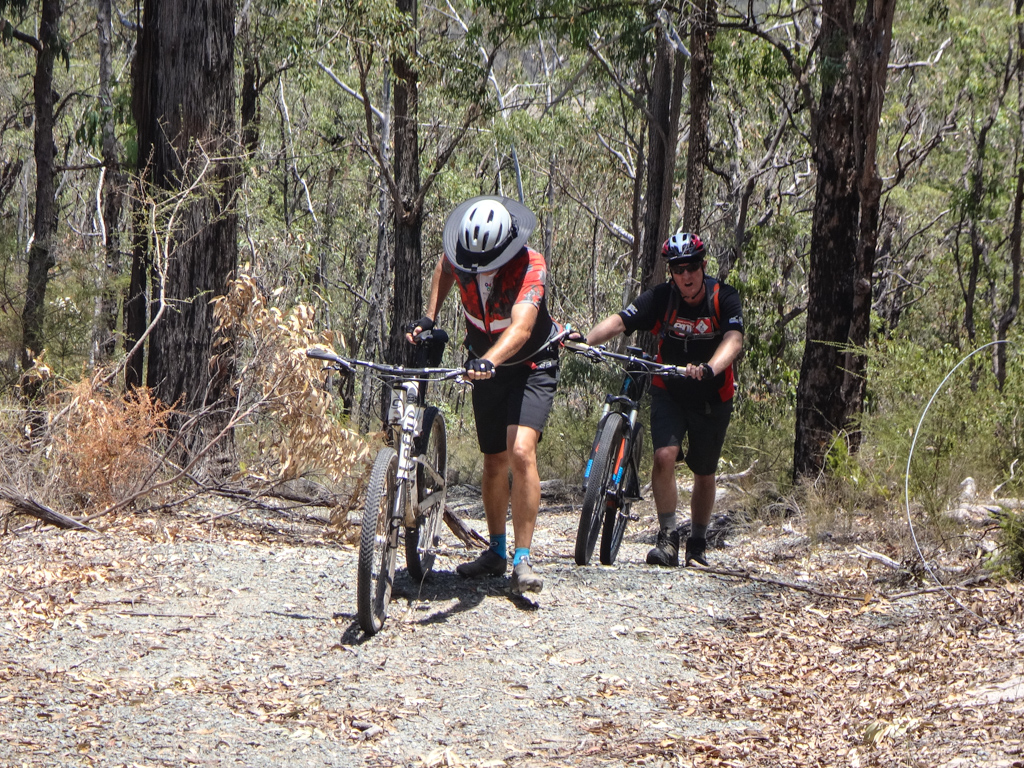 Another steep hill – some of us pushed, some pedaled.

It was turning into a very hot day.  I was happy to finally reach the top. 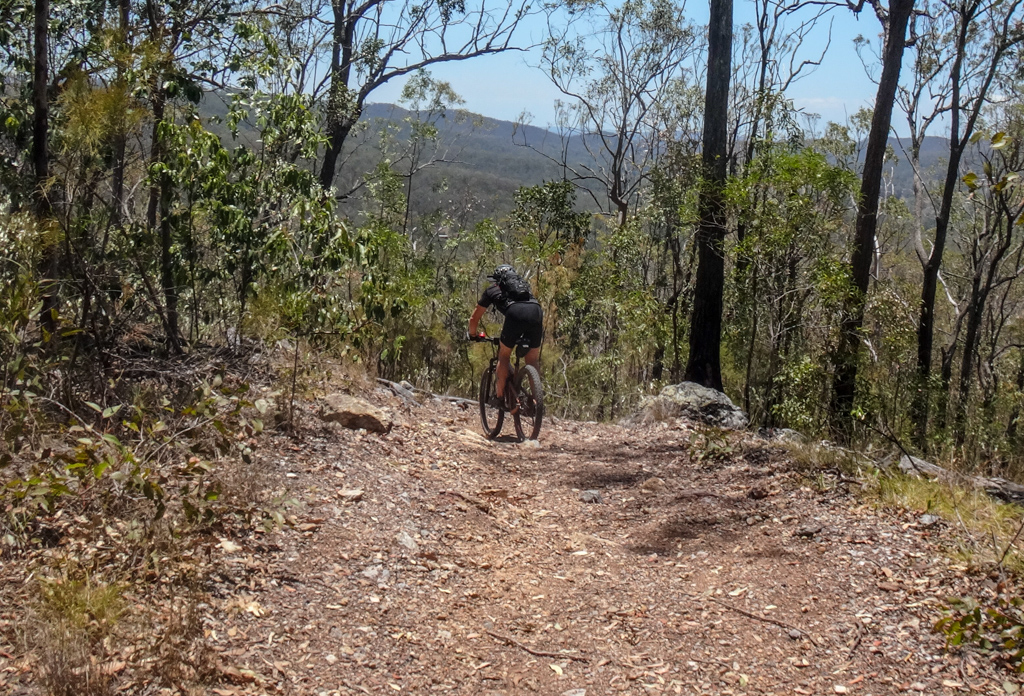 We ended the ride by following a bumpy track back down the hill to the cars.

It took us almost four hours to ride twenty-five kilometers.

That’s a lot of work for such a short distance.

During that time we climbed about 750 metres in elevation, and I burned about 2,000 kcal.

I’ll rate this one 8 out of 10 on the tough-o-meter.  Short, sharp and interesting – perfect for a summer day.

Thanks Eric, Jason, Paul S, Adam and Paul H for a fun ride. 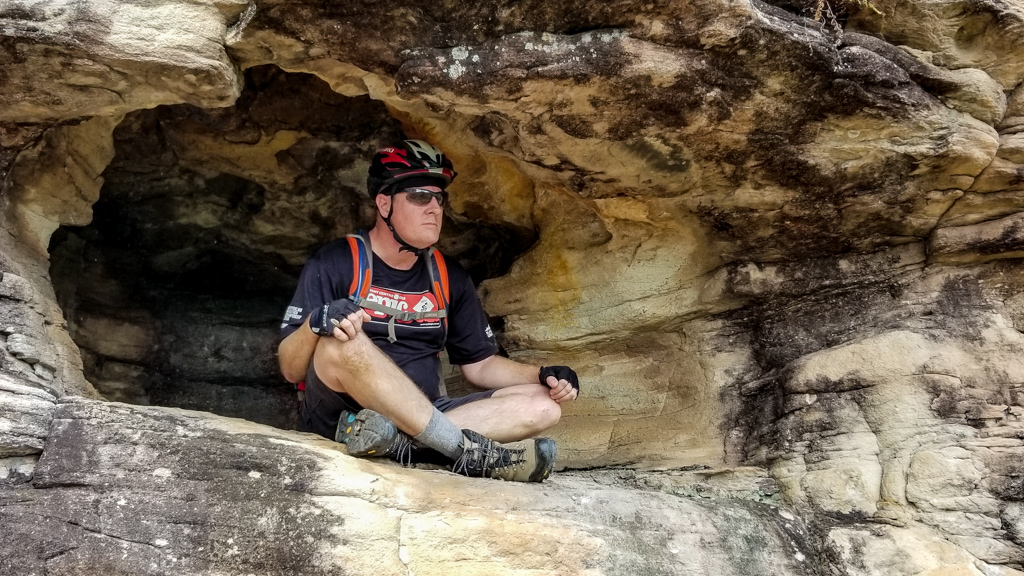 One Reply to “Plunkett”