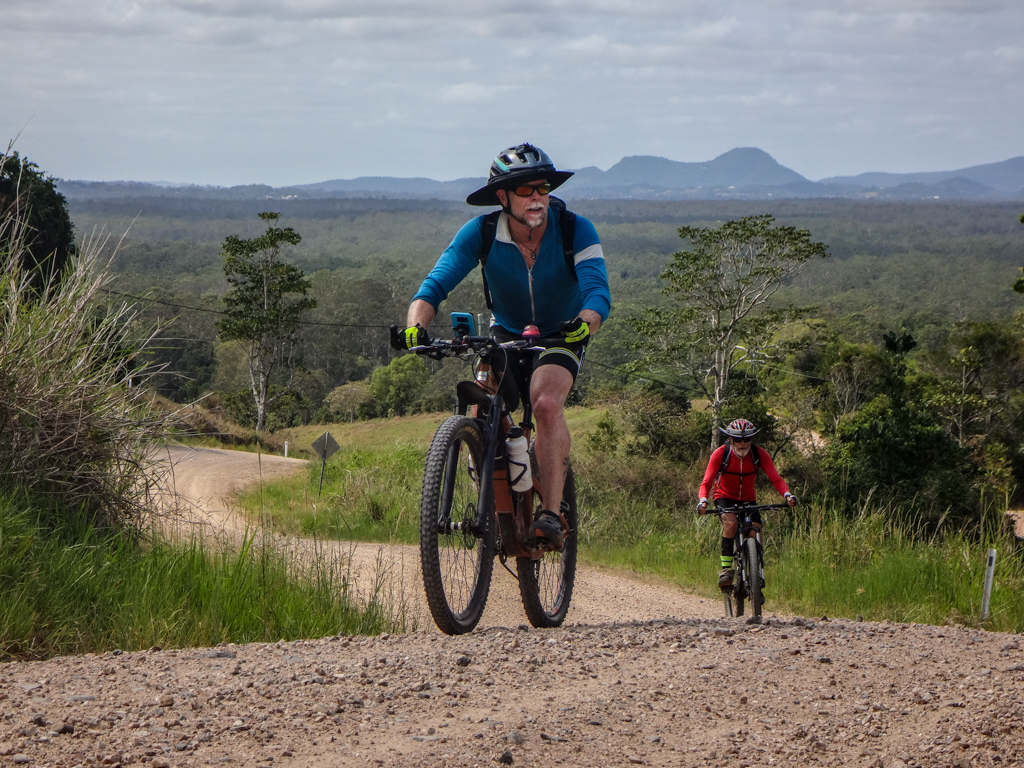 Today’s ride followed a large leisurely “figure of eight” through the scenic hills and creeks of the Noosa hinterland. 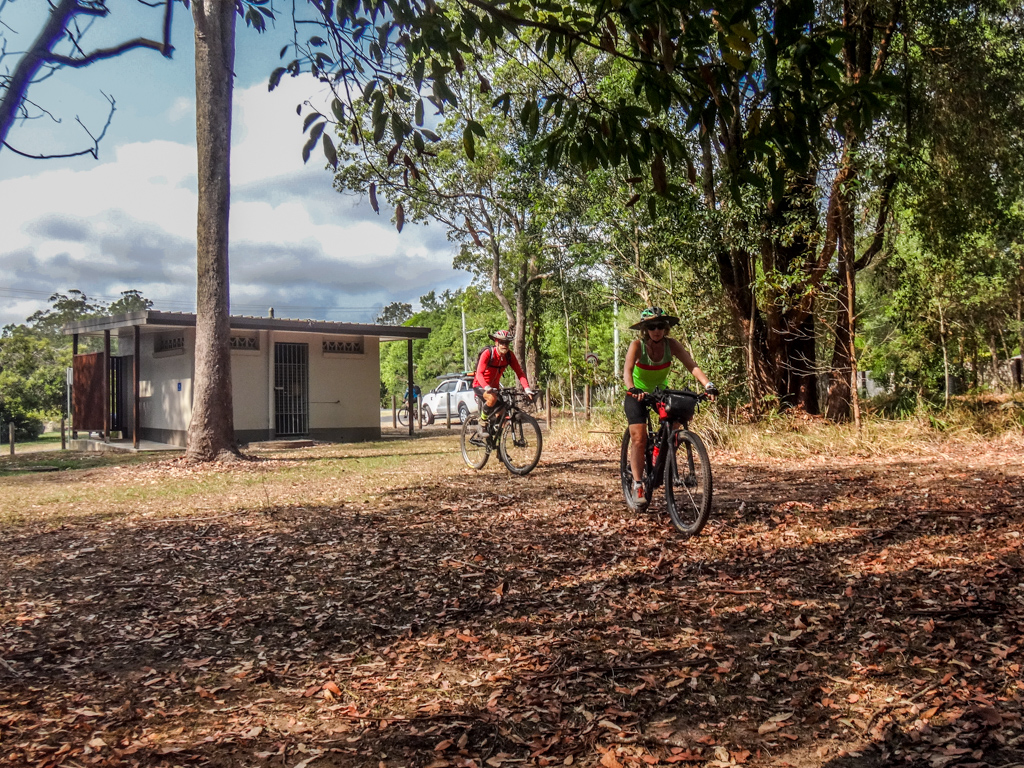 We started at Lake MacDonald, and disappeared into the bush. 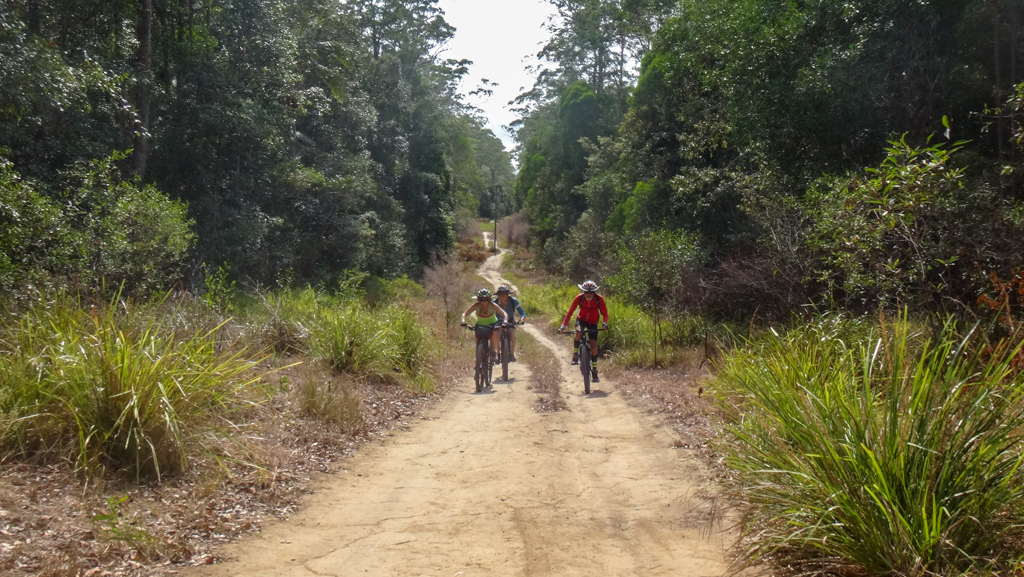 We were on a mission.

The objective for this ride was to double-check part of a course we intend to take for a multi-day ride between Nambour and Rainbow Beach.

I wanted to make sure the course I had planned would be OK. 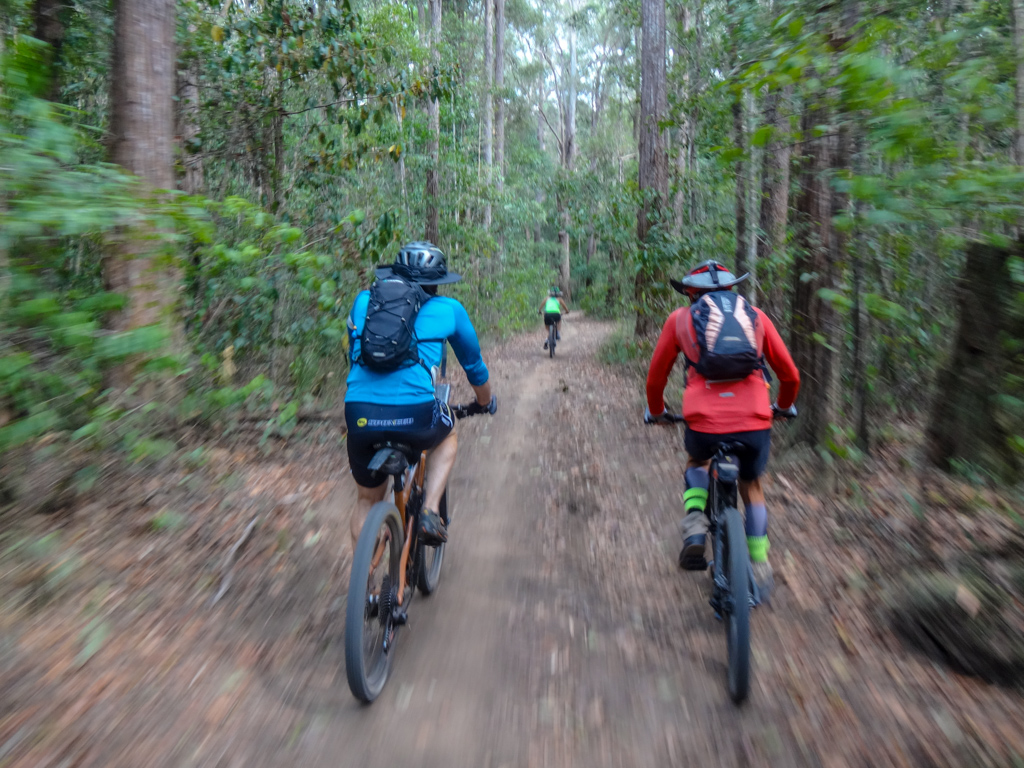 As we rolled through easy forest tracks on the “Mac ‘n Back” trail, I listened to the quiet murmurs of approval from my riding buddies. 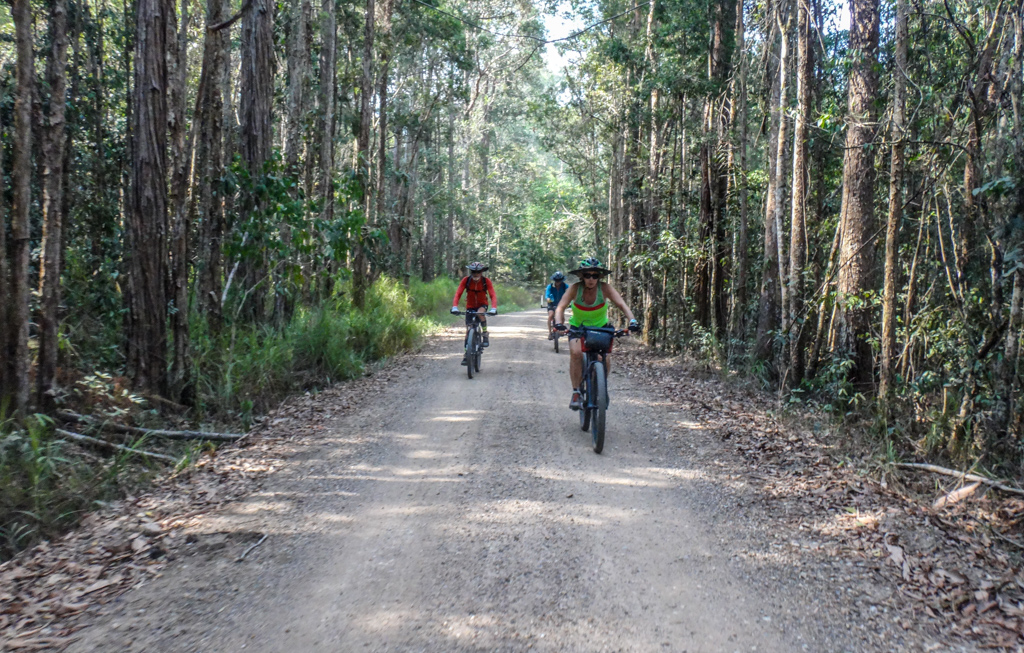 We emerged from the forest tracks at Ringtail Creek Road and followed it west to Louis Bazzo Drive. 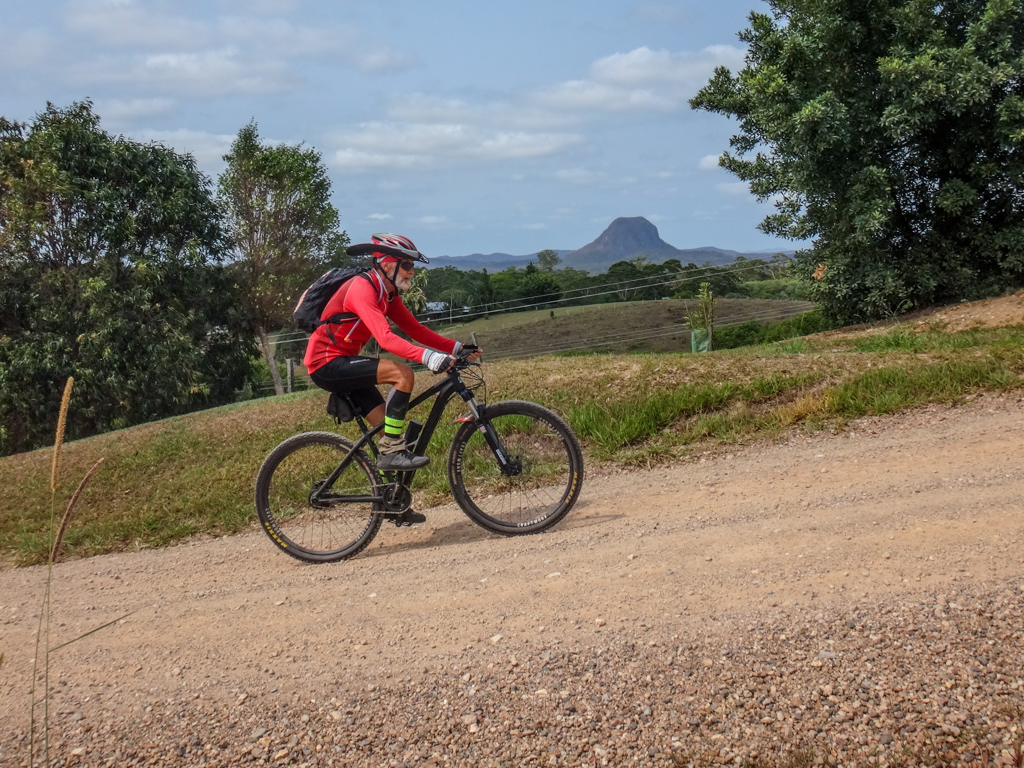 After a couple of hundred metres on the paved road we turned left into “Black Pinch Road”.

Any road name with the word “pinch” in it is going to be hard work.  It usually implies a steep section. 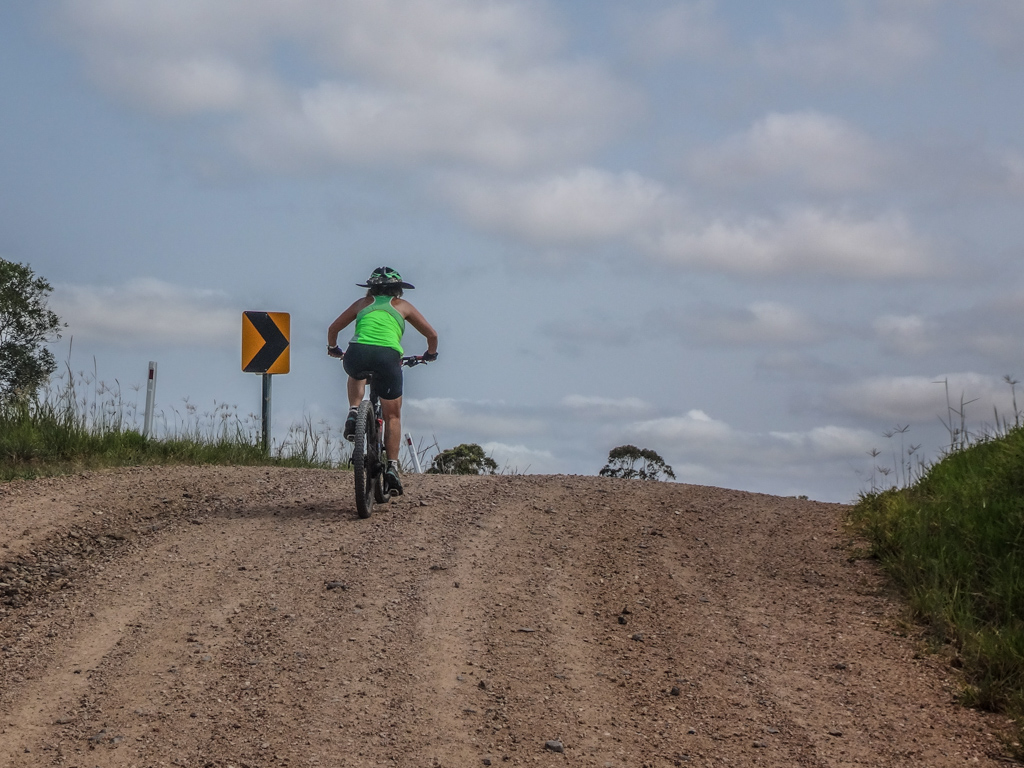 It was steep, but… 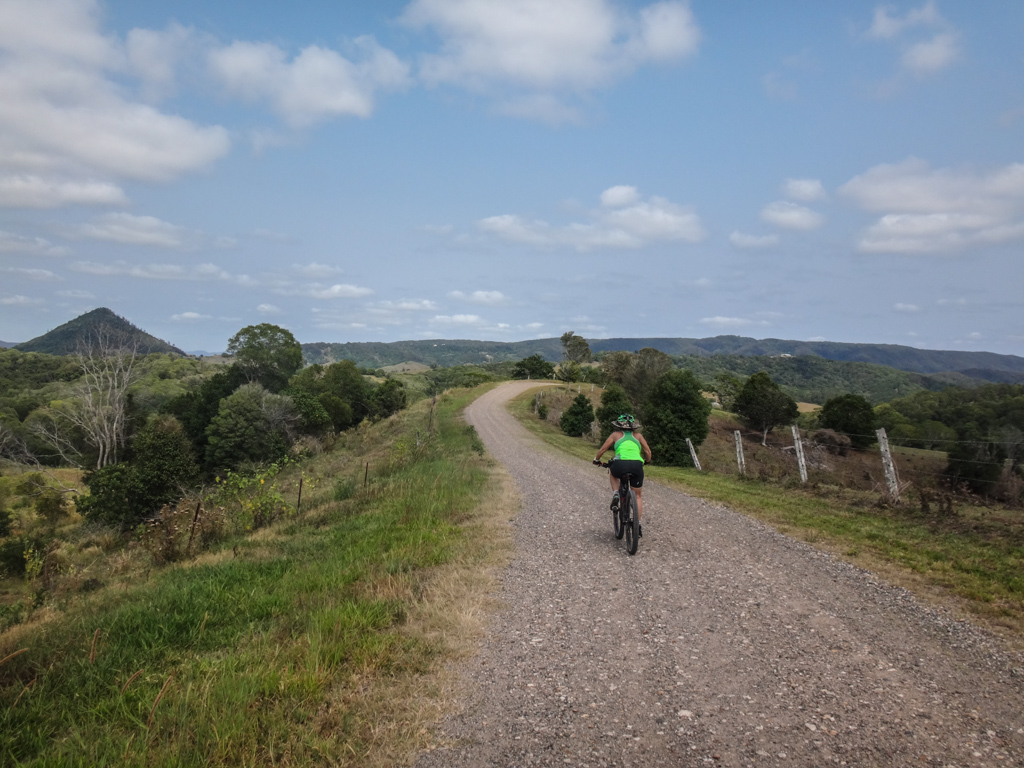 …the views were great! 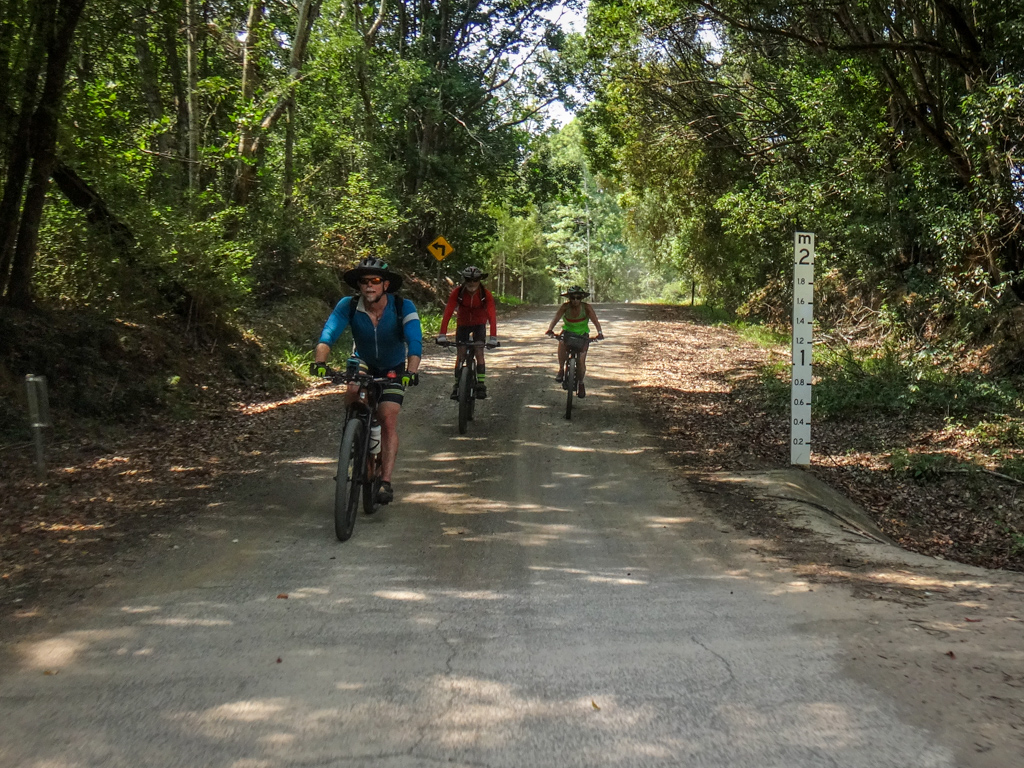 We rolled down the other side of the hill and followed more tracks into Kin Kin, just in time for Brunch. 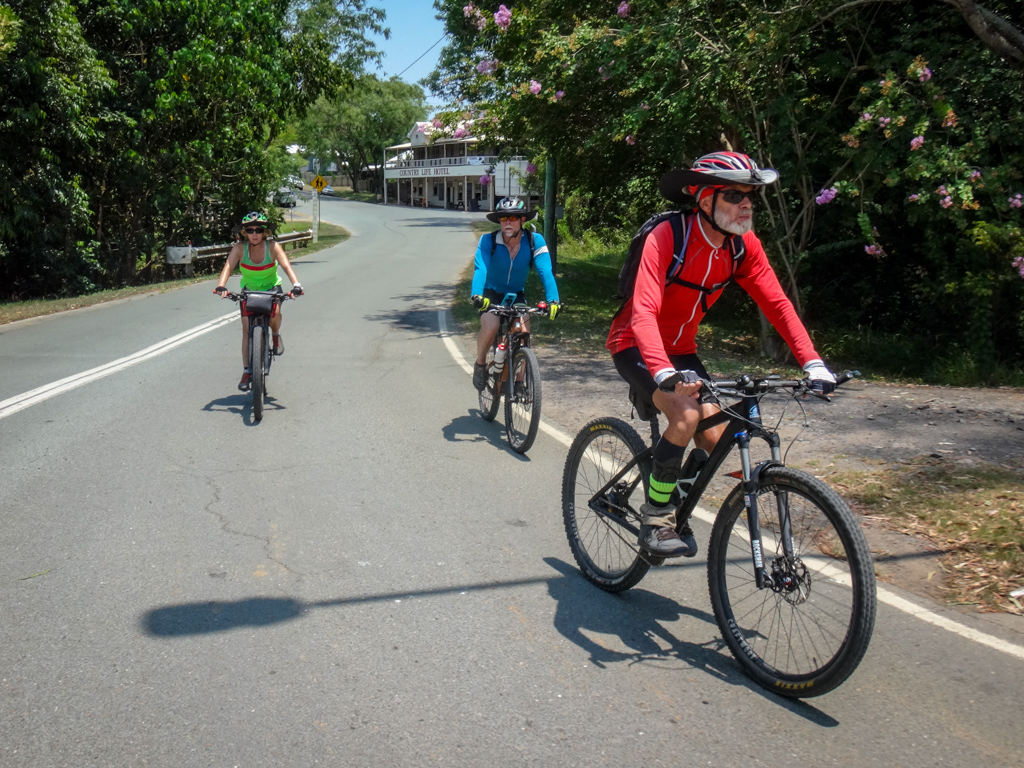 Kin Kin is a beautiful village close to Great Sandy National Park.  We plan to spend the night here on our multi-day trip.

Our course so far had been reasonably easy.  I felt confident we’d be able to do it on fat bikes in a couple of weeks without much difficulty.

Now it was time to trace an alternative route back to the start. 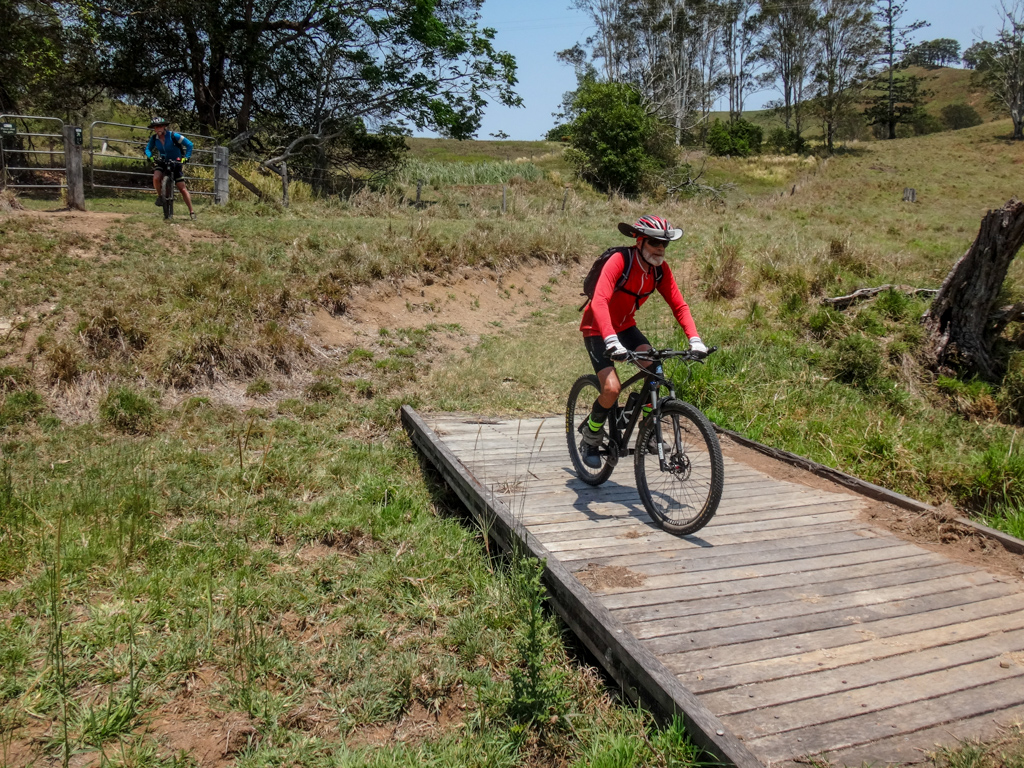 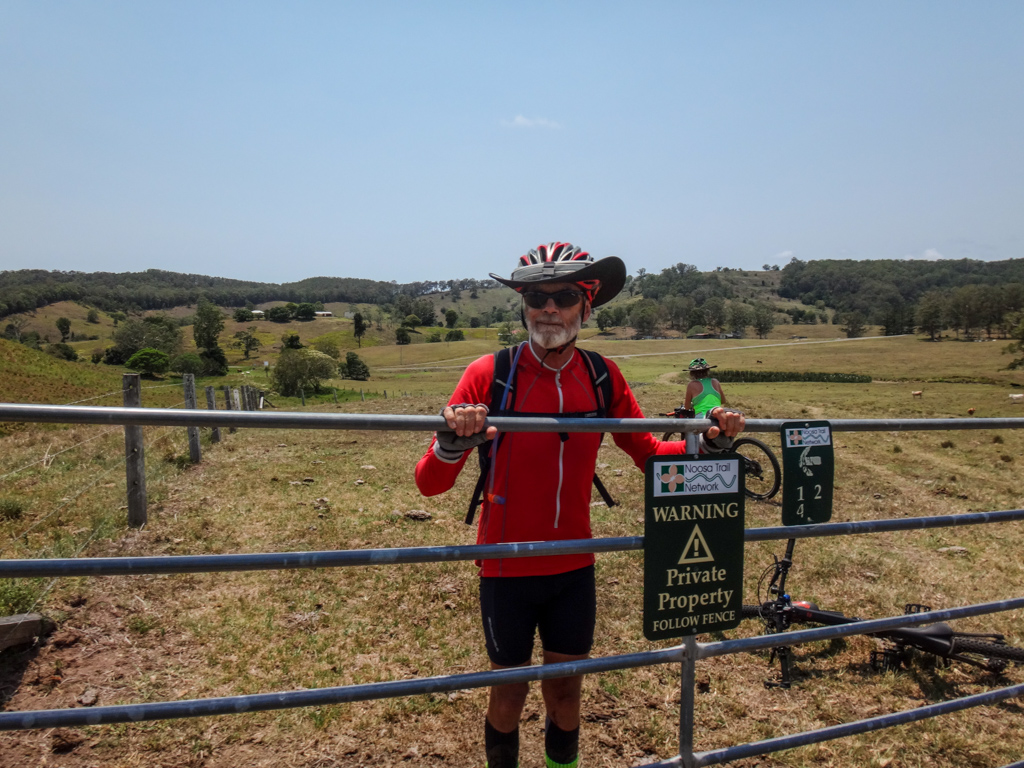 There were several gates. I was grateful for fast-riding buddies who reached the gates before me and opened them.  Great service, Calum! 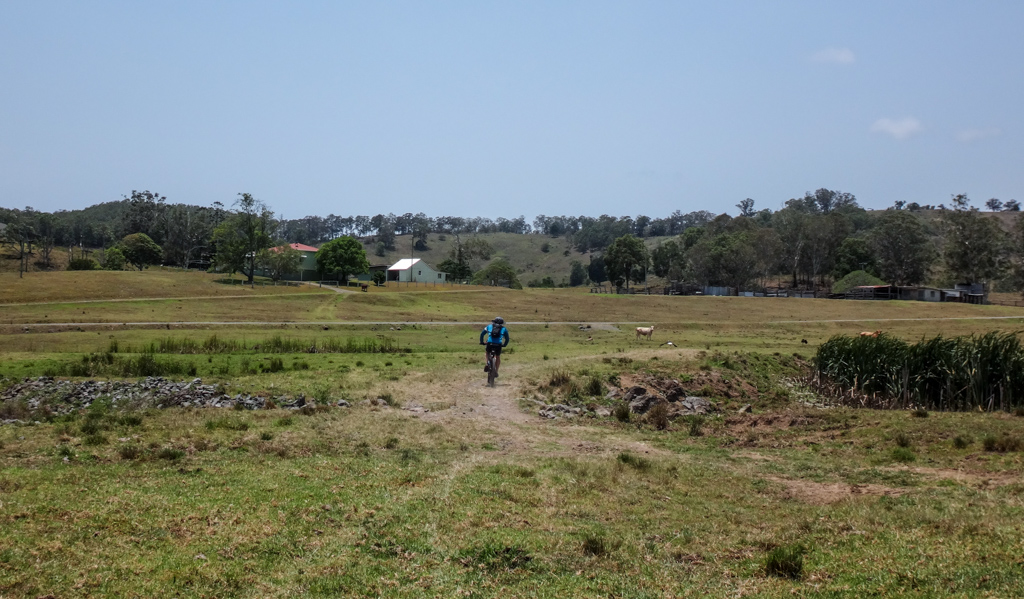 The track led us though a dairy farm 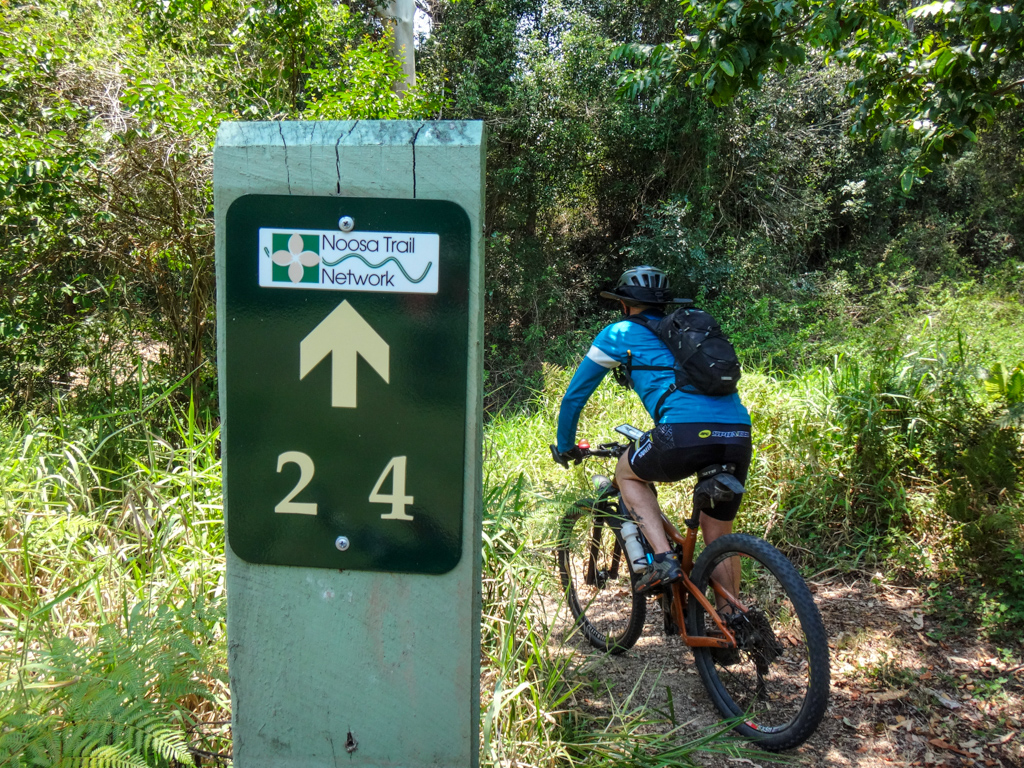 At Shepperson’s Park we followed a rough, steep track up the hill.  Jason powered upwards with his turbo-charged legs.  I pedaled some of the way, then walked the rest.  It’s a tough climb. 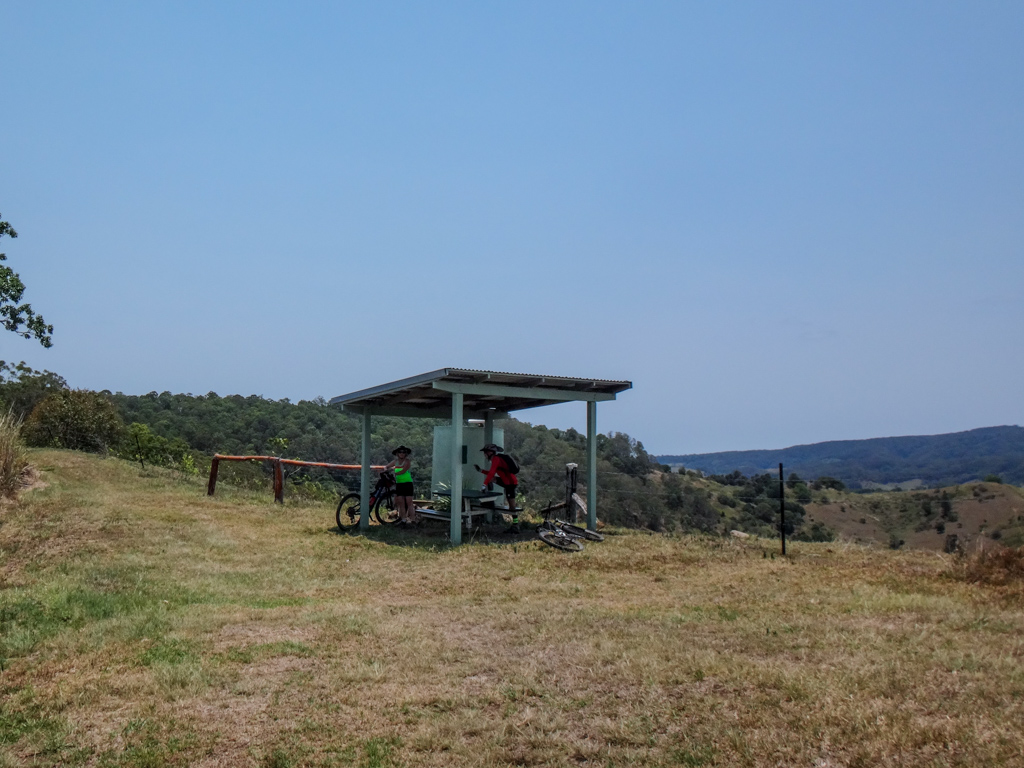 We rested in the welcome shade of the hut at Cootharaba lookout. 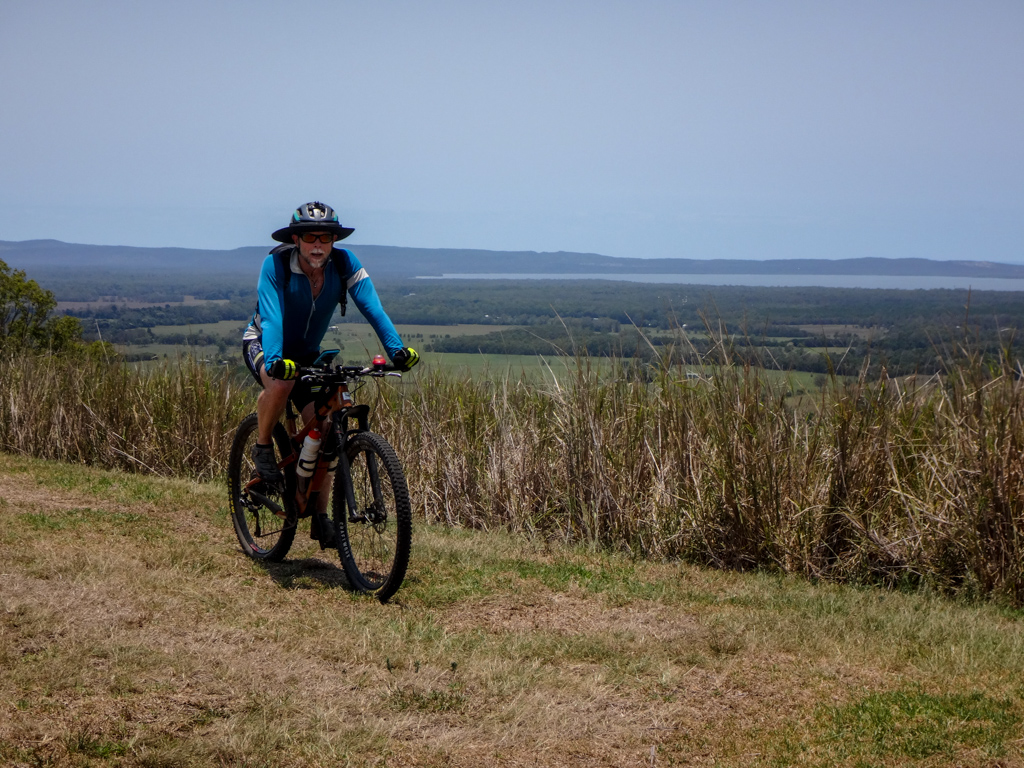 There are some great views eastward from here, looking over the lake towards the ocean. 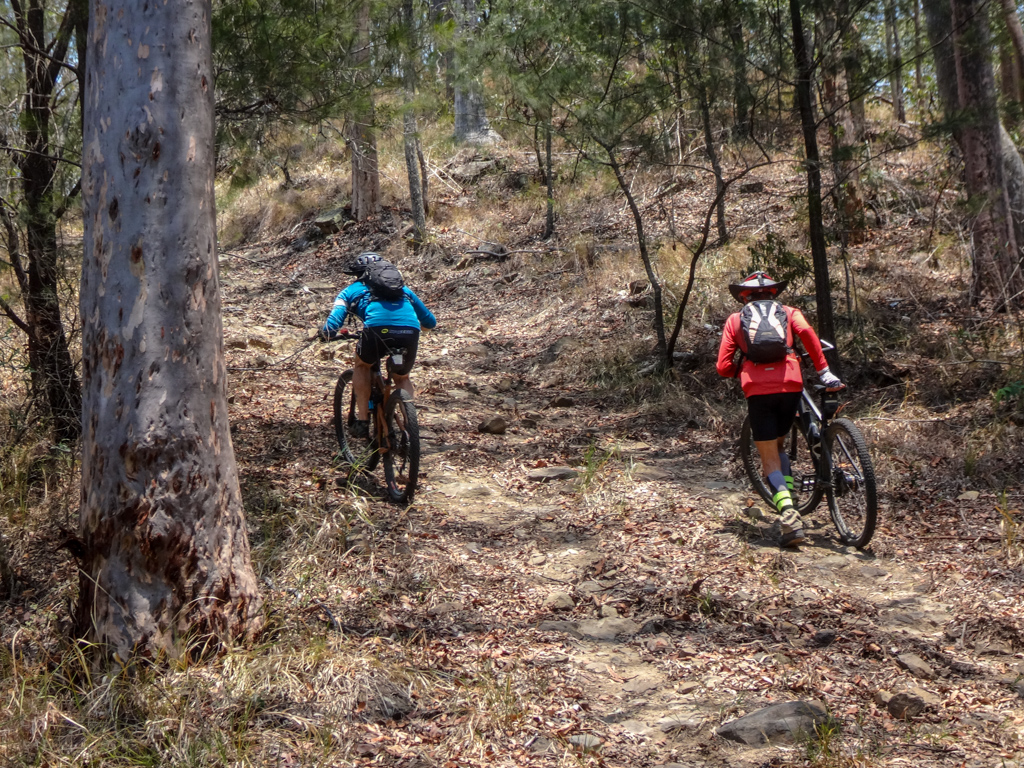 As we continued south, the track became steep and rocky.

The ridge which follows the top of the Wahpunga Range is rugged. 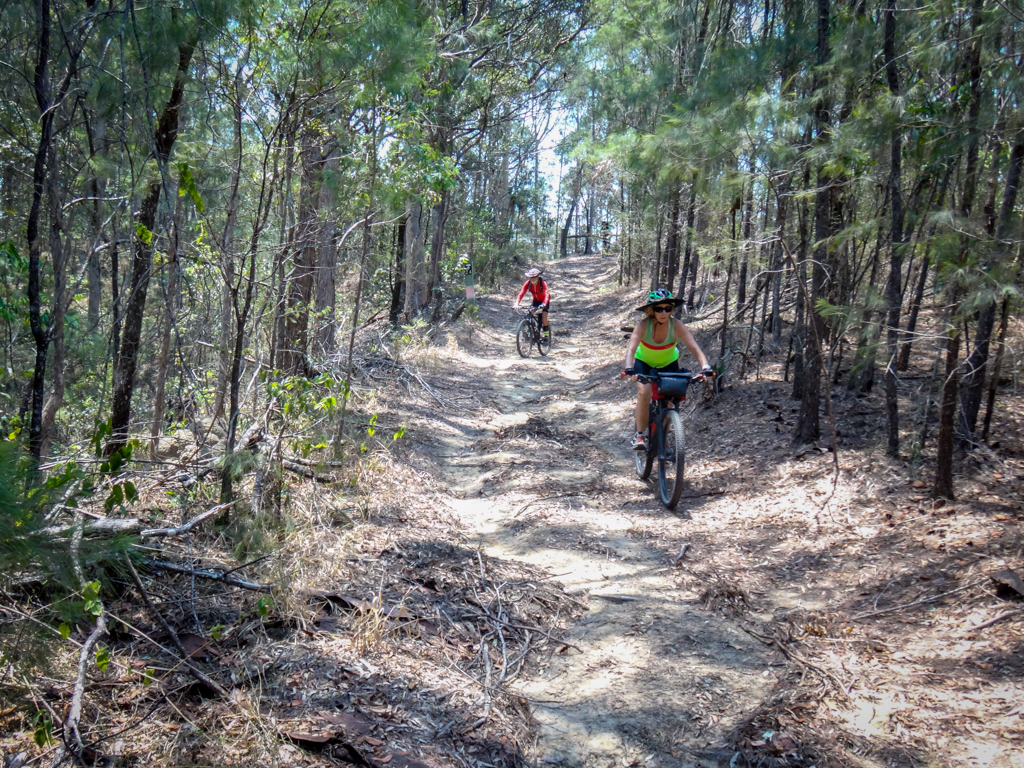 Eventually we reached the summit, then bounced down the other side. 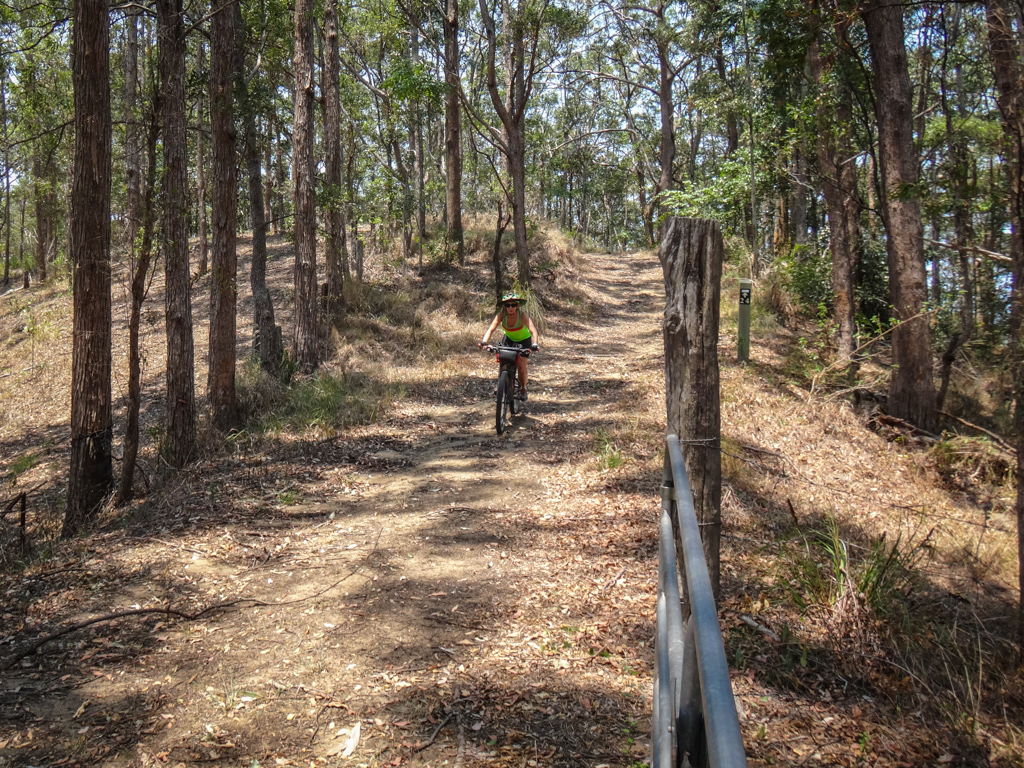 It was my turn to hold the gate open for my friends. 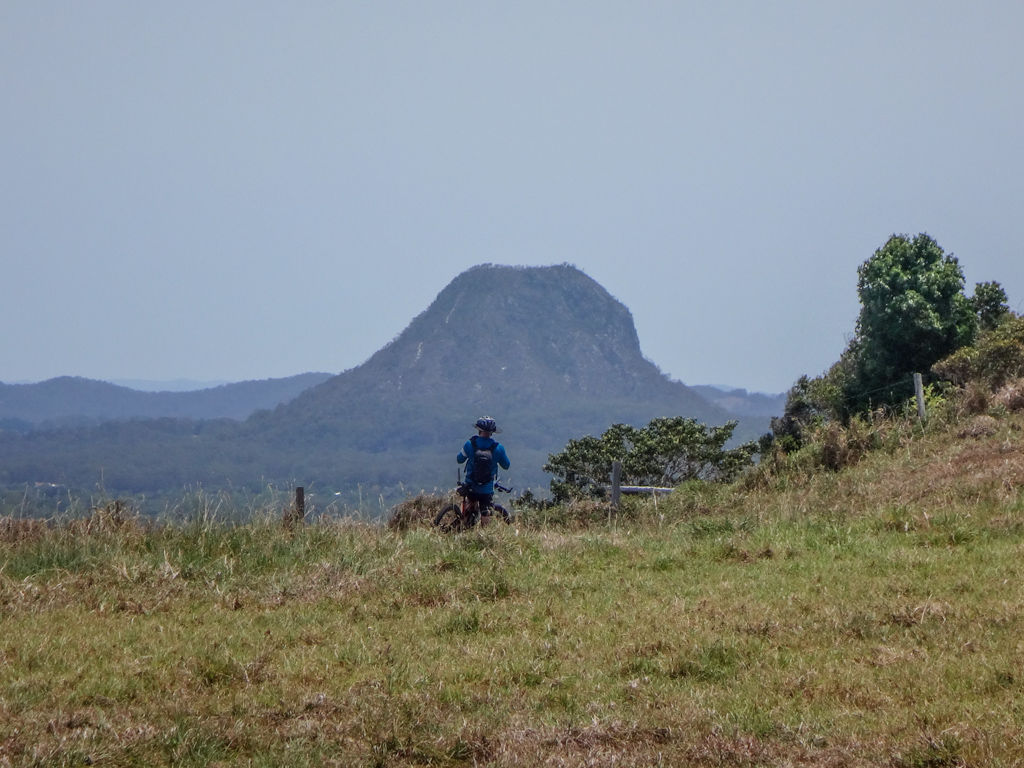 At Twin Hill Lookout we stopped to take photos of Mount Cooroora.

Jason once climbed this mountain after a tough ride.  He has often joked that I should do it again with him some time.  My response is usually a polite smile while muttering something less polite under my breath. 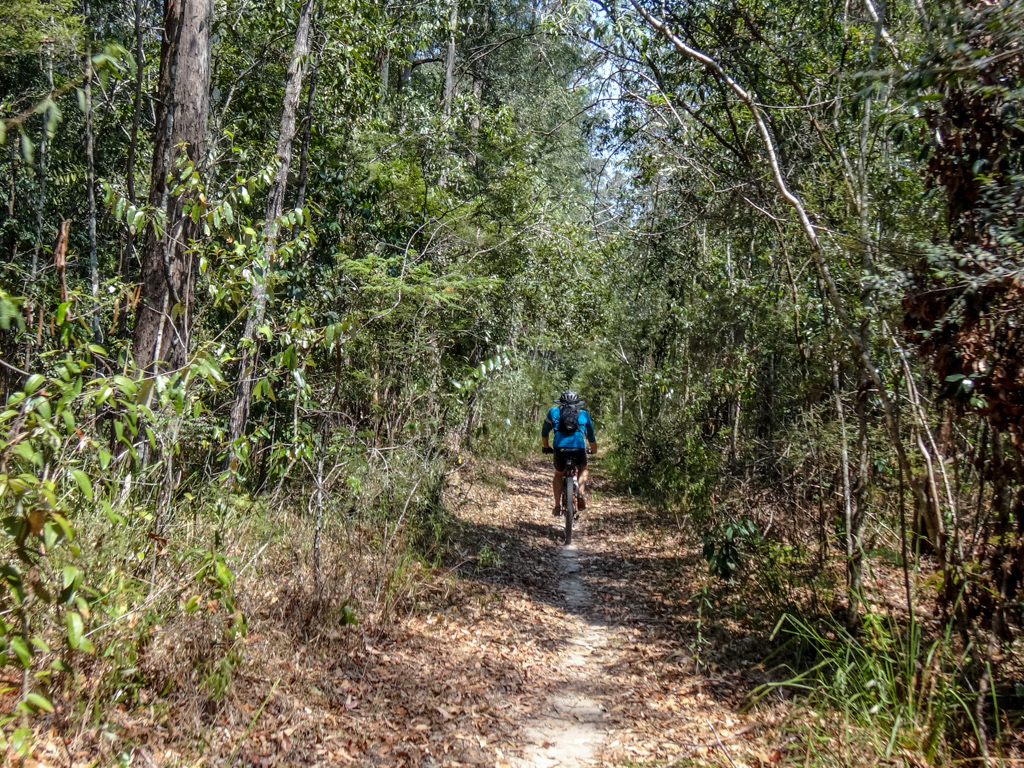 At the bottom of Black Pinch Road we followed Old Coach Road back to Lake MacDonald.

We rode about forty-seven kilometres in just over five and a half hours.  During that time we climbed about 1,250 metres in vertical ascent, and I burned about 3,000 kcal.

Thanks Jason, Calum and Kaye for a fun day out.

I’m looking forward to coming back here in a couple of weeks. 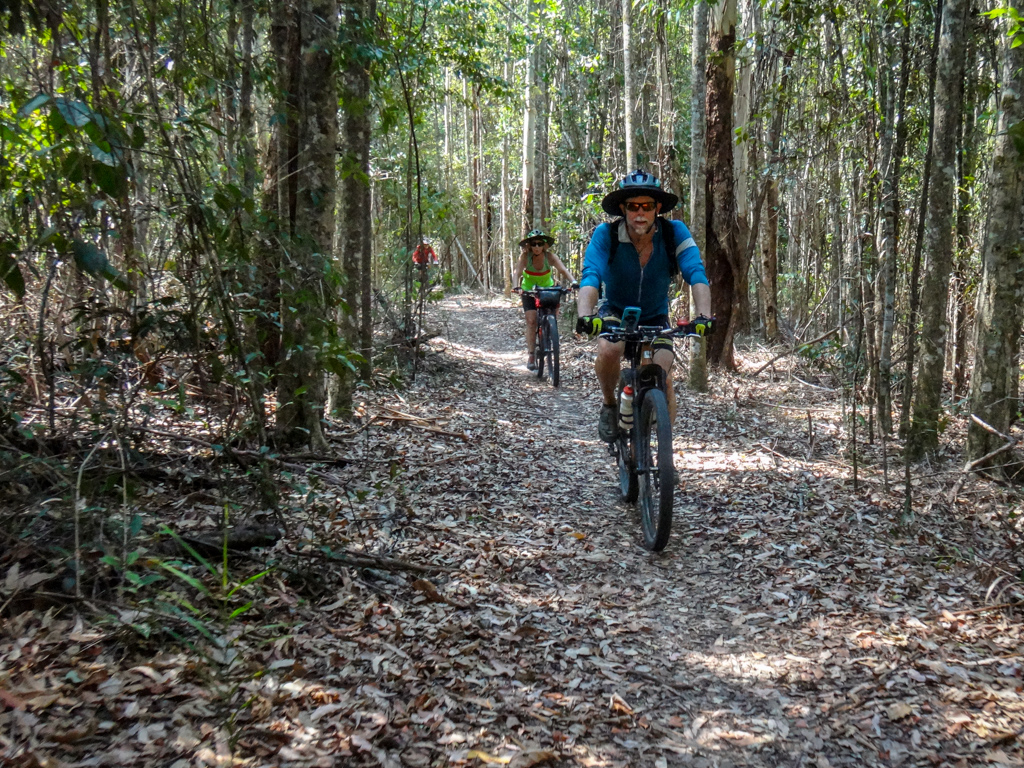