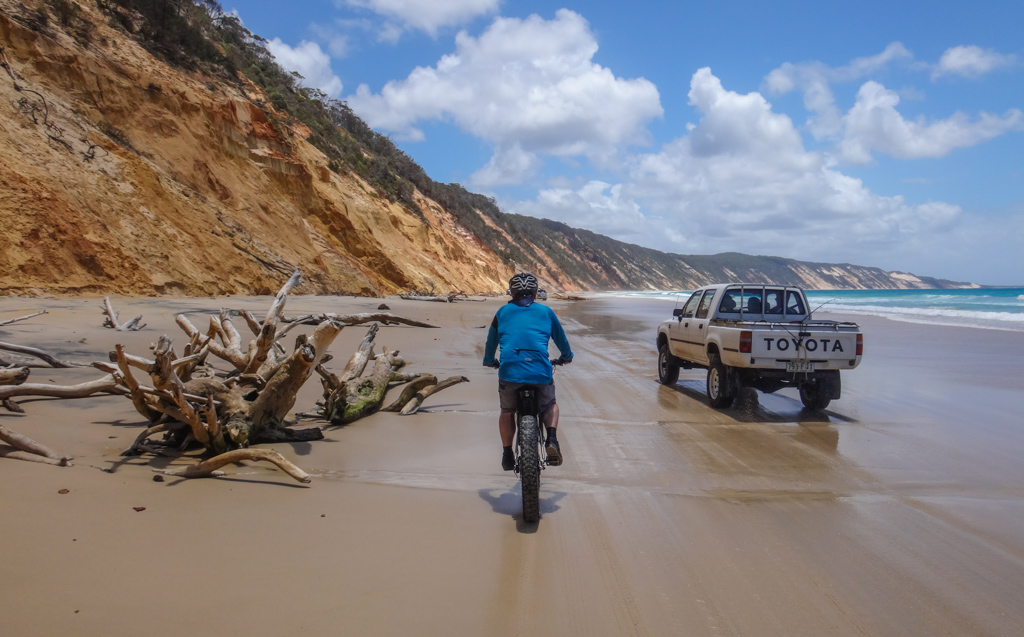 I find it difficult to resist the call of the stunning ochre cliffs of Rainbow Beach.  When Jason invited us to join him for a ride there, how could we refuse? 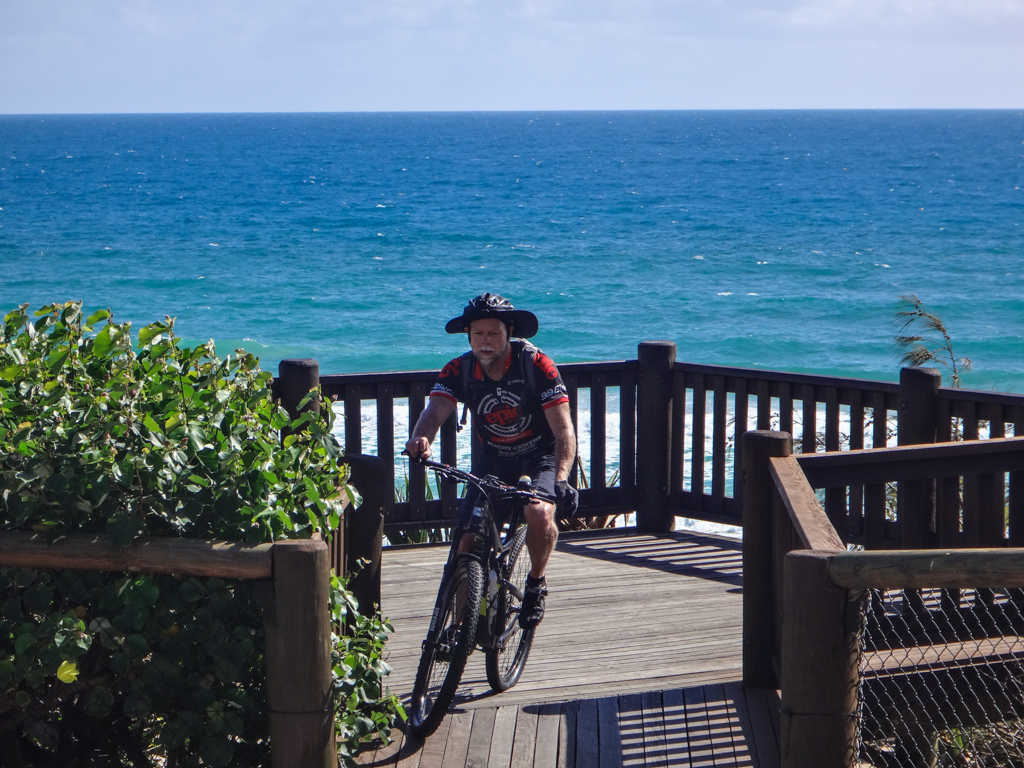 We’ve done “The Rainbow Loop” several times.  Today, Jason wanted to show us a couple of his favourite tracks.  Darb and I relished the chance to discover more new trails in this beautiful part of the world. 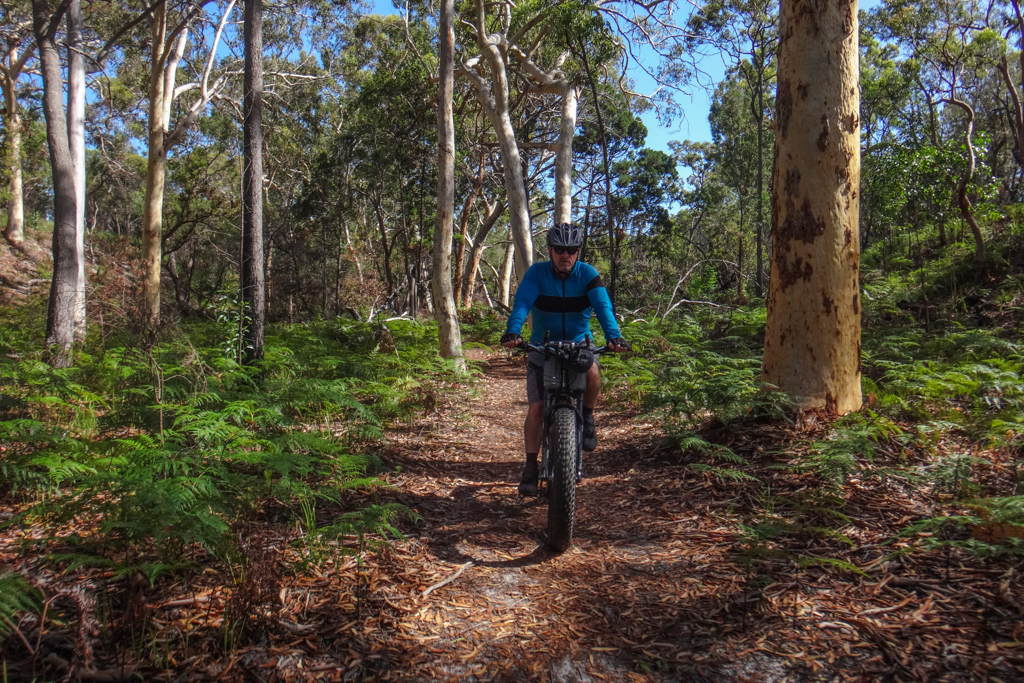 Instead of heading straight onto the beach, we followed a quiet bush track inland for a few kilometres. 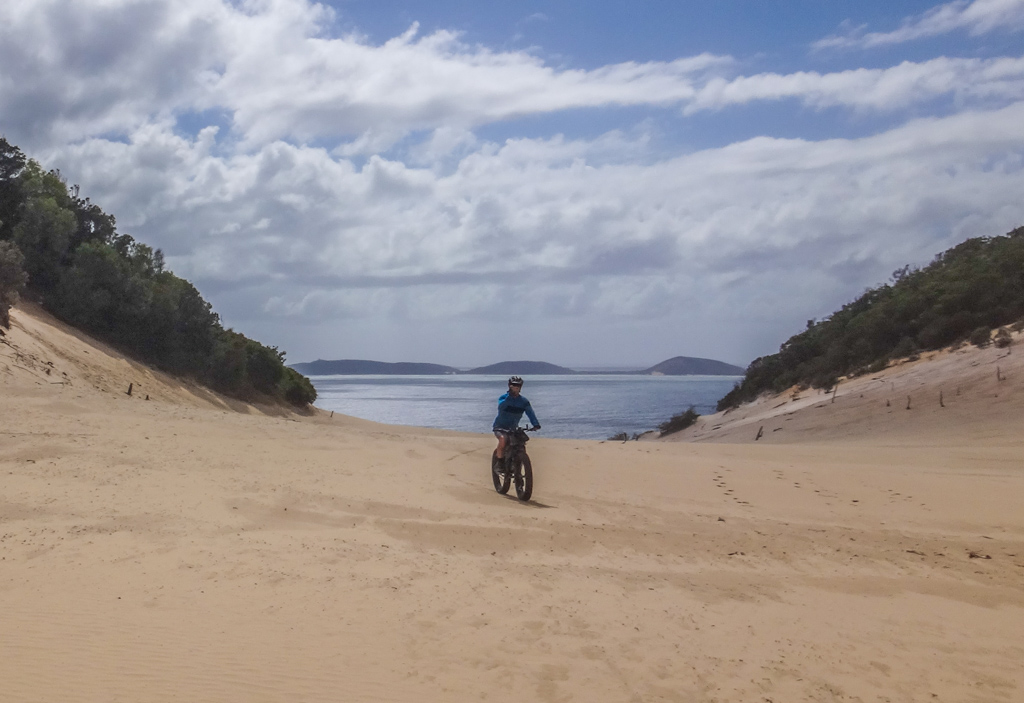 Jason sat at the top of Carlo Sandblow while Darb and I rolled around on the vast sandy expanse like kids on BMX bikes.

Recent rain had formed a hard crust of sand which made it easy for us to ride over.

We rolled around the huge patch of sand, 130 metres above the ocean, enjoying views to the horizon in every direction. 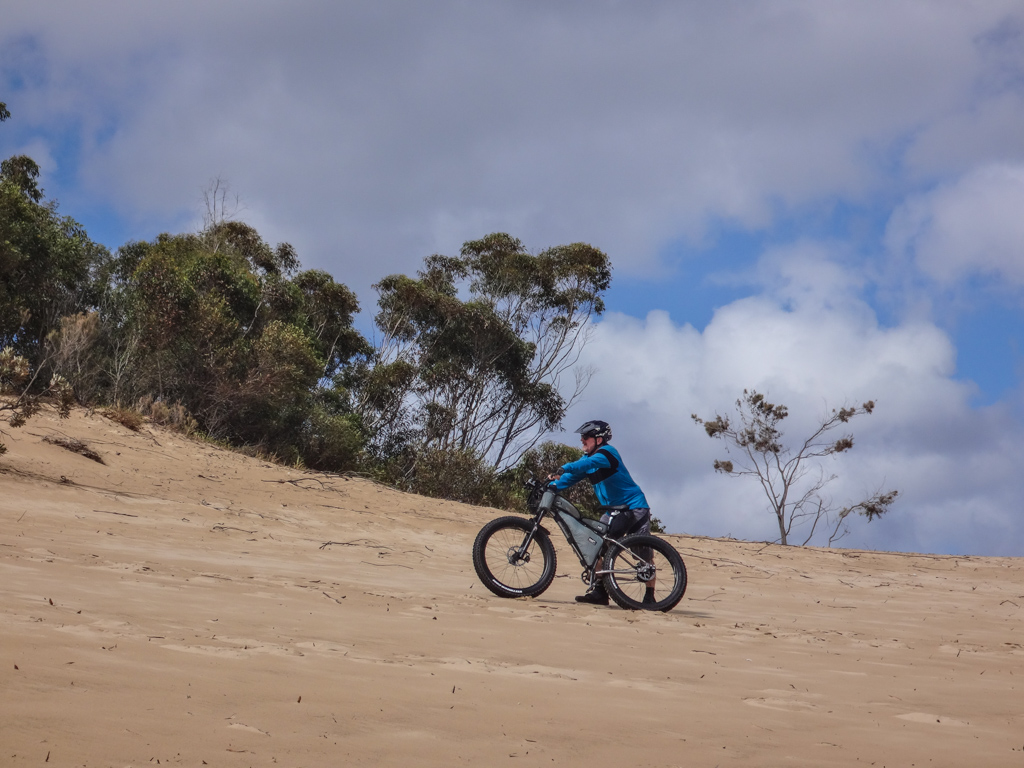 As we climbed back towards Jason at the top of the dunes, the slope grew too steep and we had to push the bikes the last few metres. 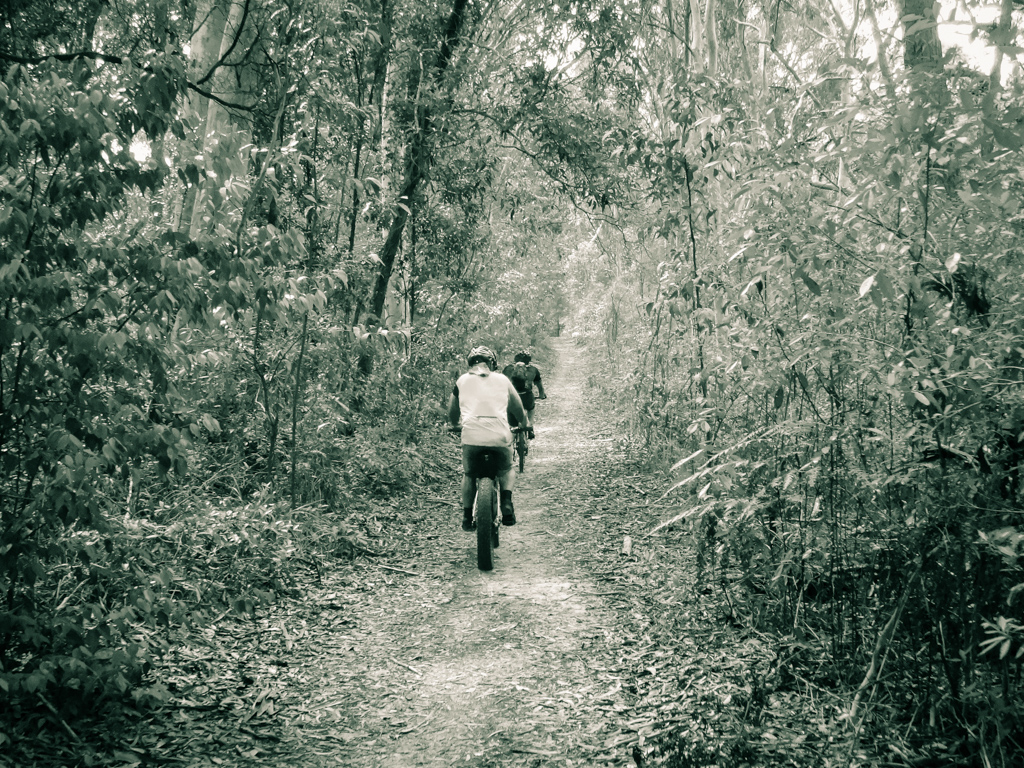 Our track followed the cliff tops, slowly gaining elevation.  Although they’re made of sand, these cliffs are high, towering up to 150 metres over the beach below. 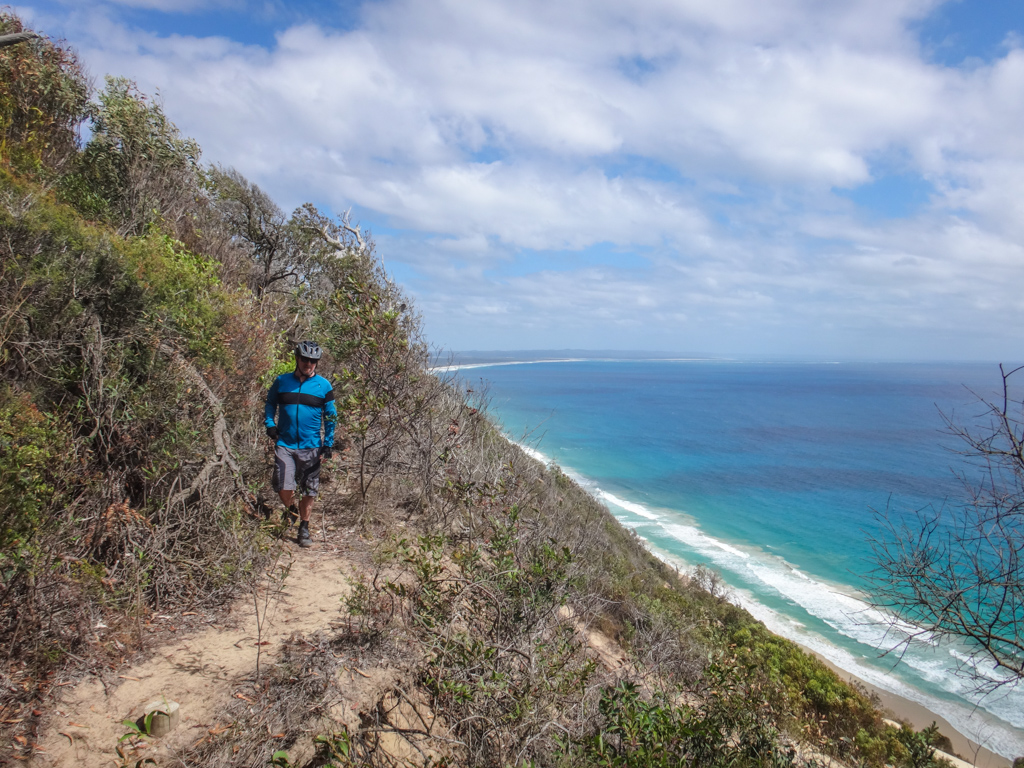 A few minutes later we took a short detour to the precipice.  Below us, the turquoise ocean stretched to the horizon and a thin rind of sand arced away northwards to Fraser Island.

I’m convinced gazing off to infinity is good for the soul. 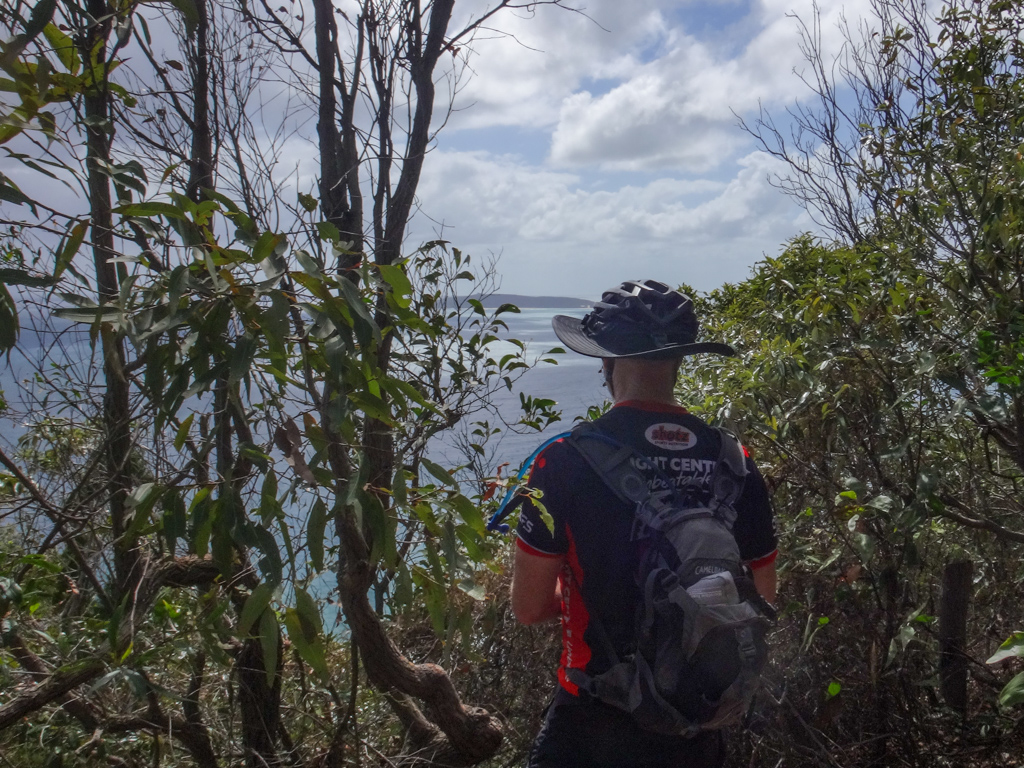 Jason pointed out Double Island Point where he planned to take us later in the day.

From here it would have been easy to just follow the clifftop track to Double Island Point, but Jason wanted to take a short detour…

The landscape abruptly changed from open bushland to shady rainforest. 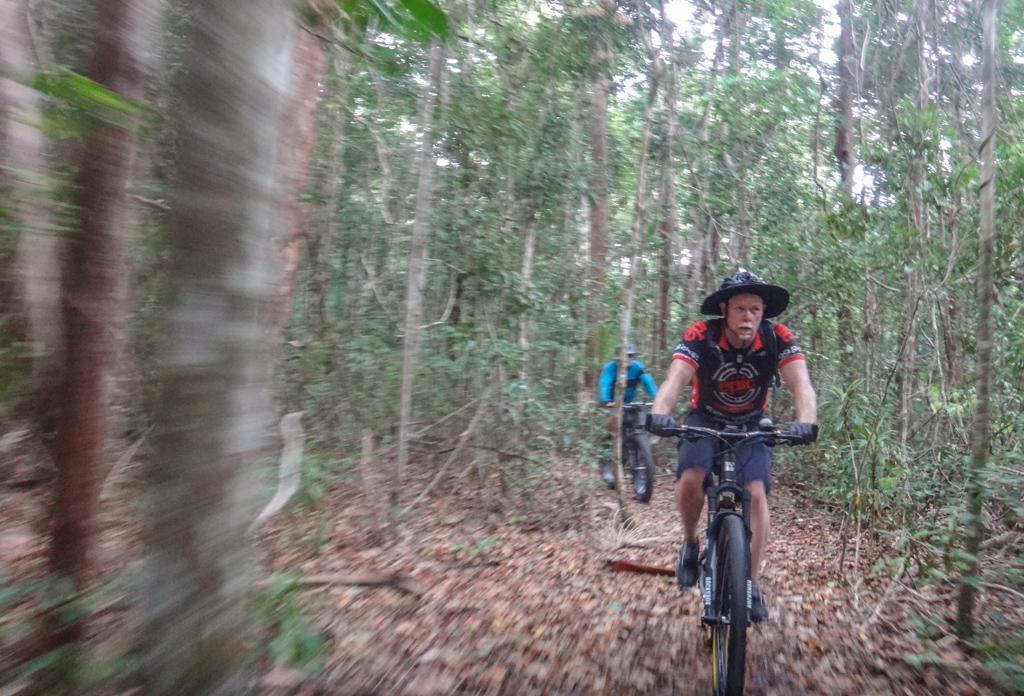 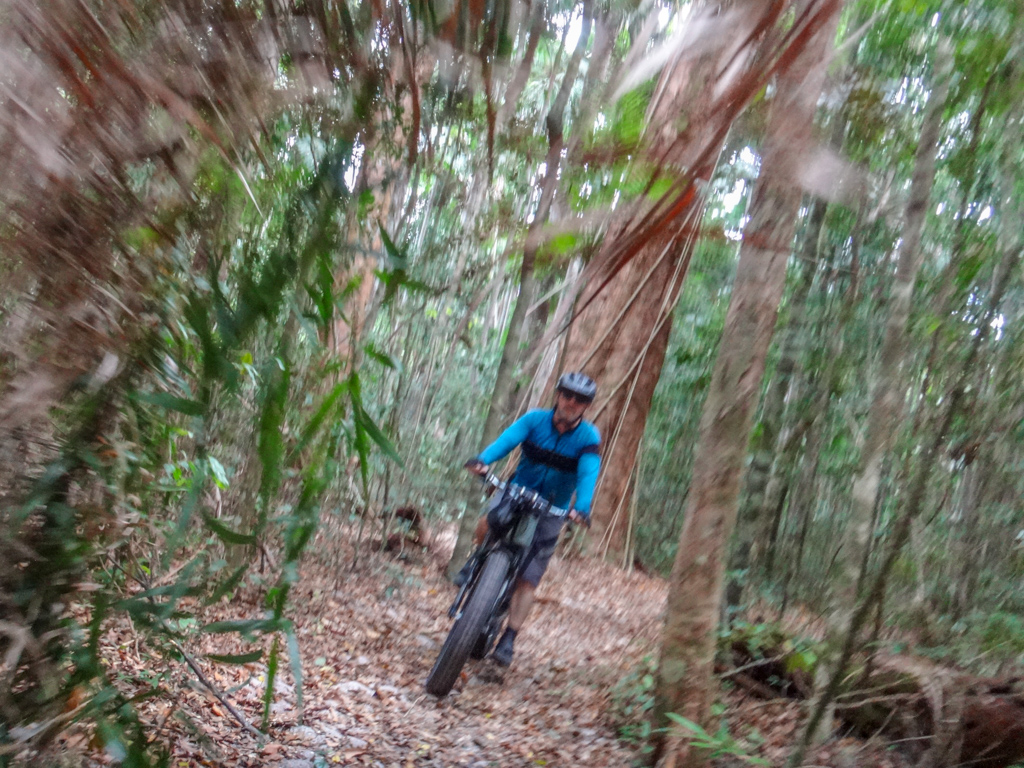 …dodging vines, roots and fallen trees as we went.

Eventually, we emerged on the shore of Poona Lake.

Darb wandered around by the water’s edge. 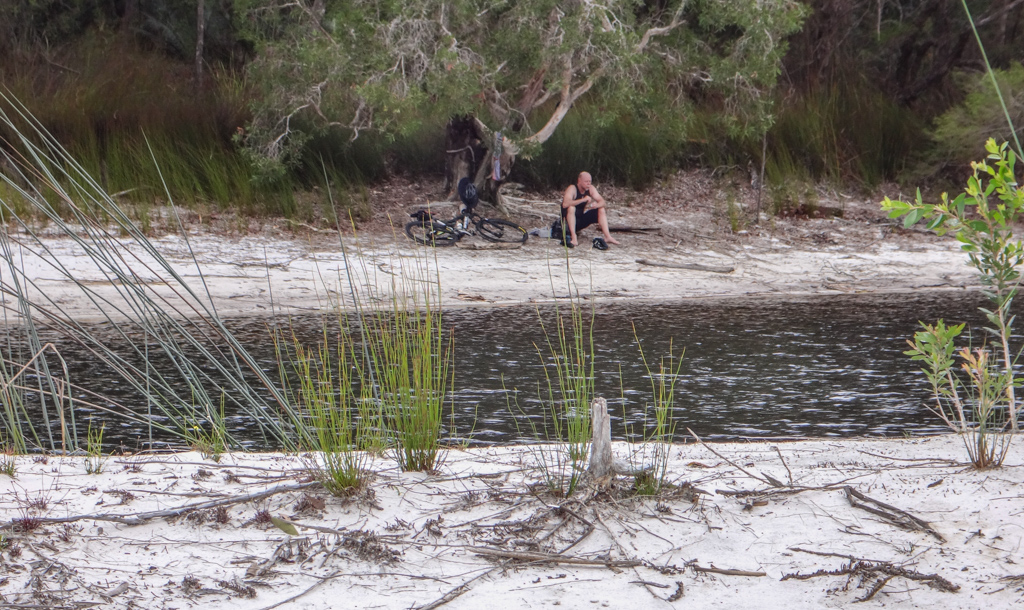 Jason had a swim.

I just paddled around in the water up to my knees – deciding I’d rather not do the rest of the ride in wet knicks. 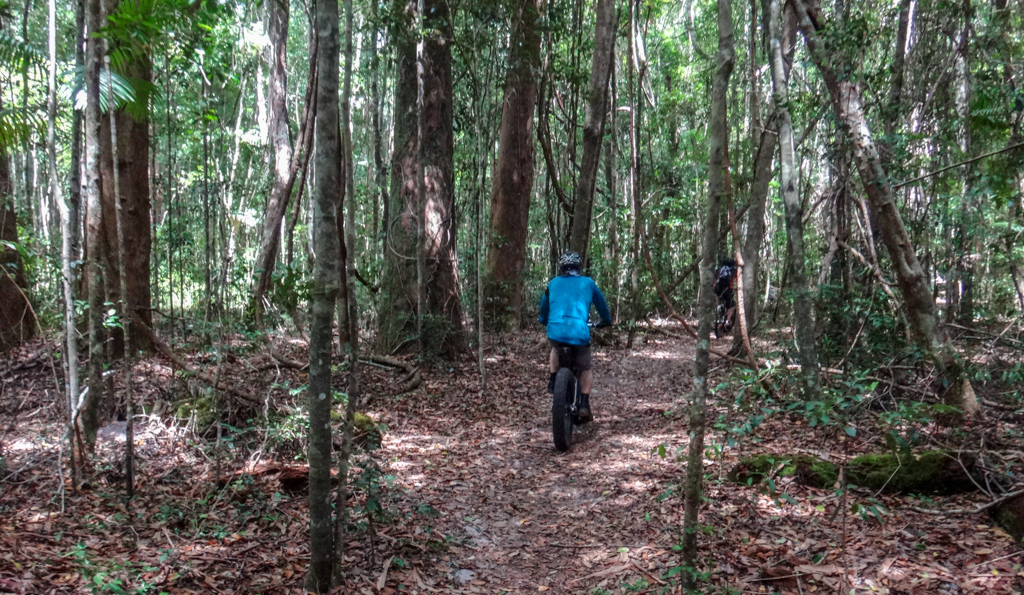 After a brief rest, we rejoined the narrow track and followed it back towards Freshwater Road. 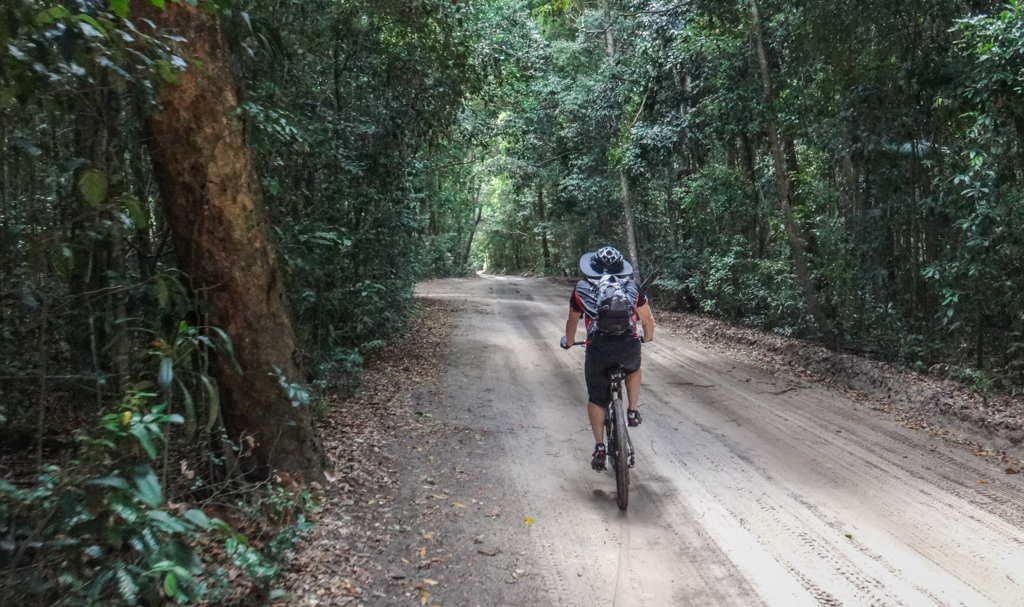 Freshwater Road is a busy trail used by 4WD’s to access the beach.  It was like riding through a strange city where skyscrapers were replaced with tall green trees, and the street was replaced with a sandy track.  It was pretty, but we had to often move out of the way to let vehicles pass. 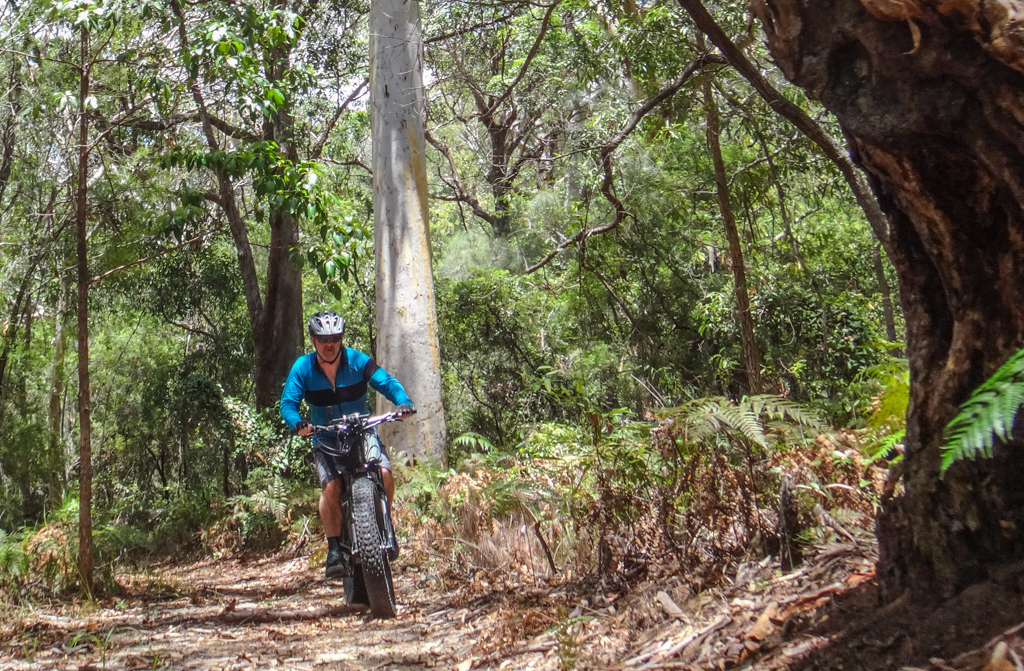 We soon left Freshwater Road, rejoining the clifftop track we followed earlier in the day. 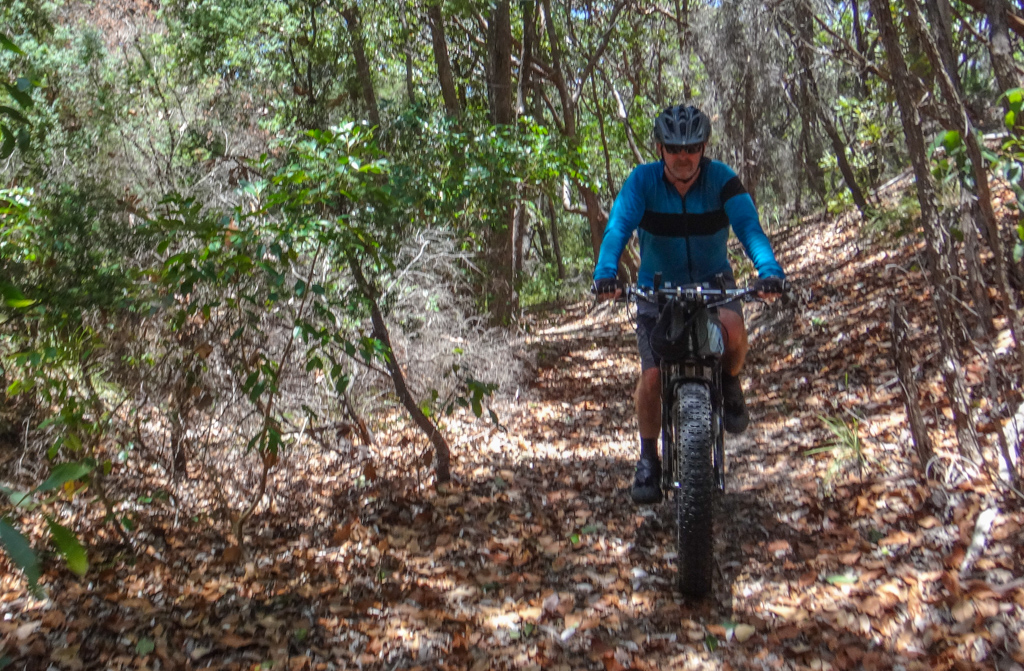 It undulated for several kilometres before eventually spitting us out on the beach at Double Island Point. 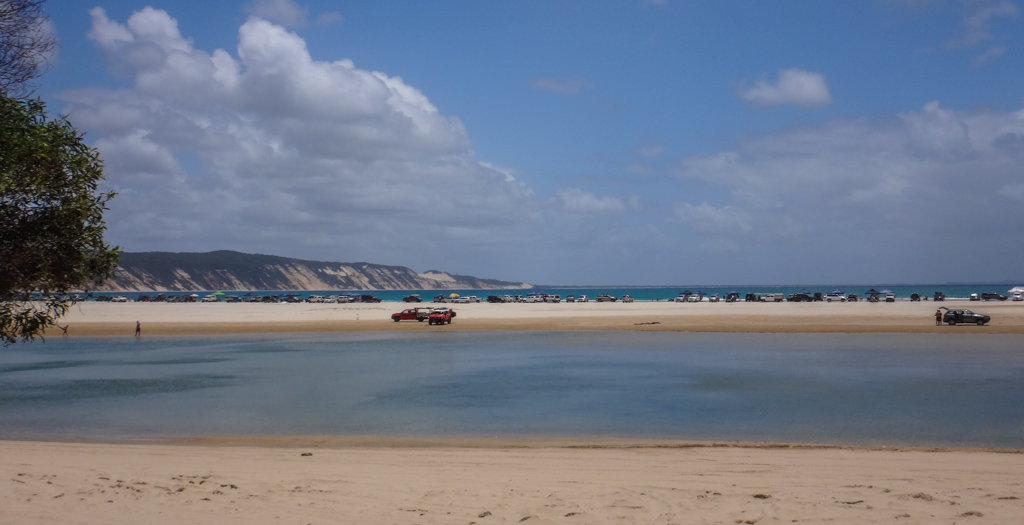 My friend, Bob W, had visited this spot the day after us and said it resembled a “Second-hand 4WD car sale yard”.

Hundreds of cars lined the beach.

Every spot of shade in dunes was taken by holiday-makers trying to escape the scorching sun.

Jet skis and paddleboards swirled around the lagoon like strange swans. 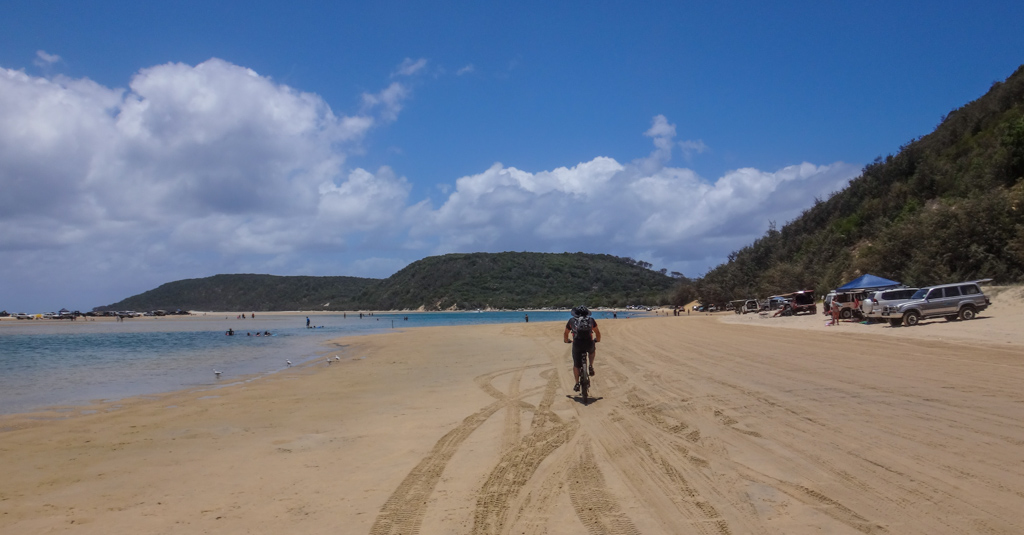 We followed Jason up the beach towards the headland.

The beach narrowed at one point.  The rising tide and hundreds of vehicles had hollowed out a deep ditch which made it impossible to get any further without wading through the water.

I had fun watching the cars splash through. 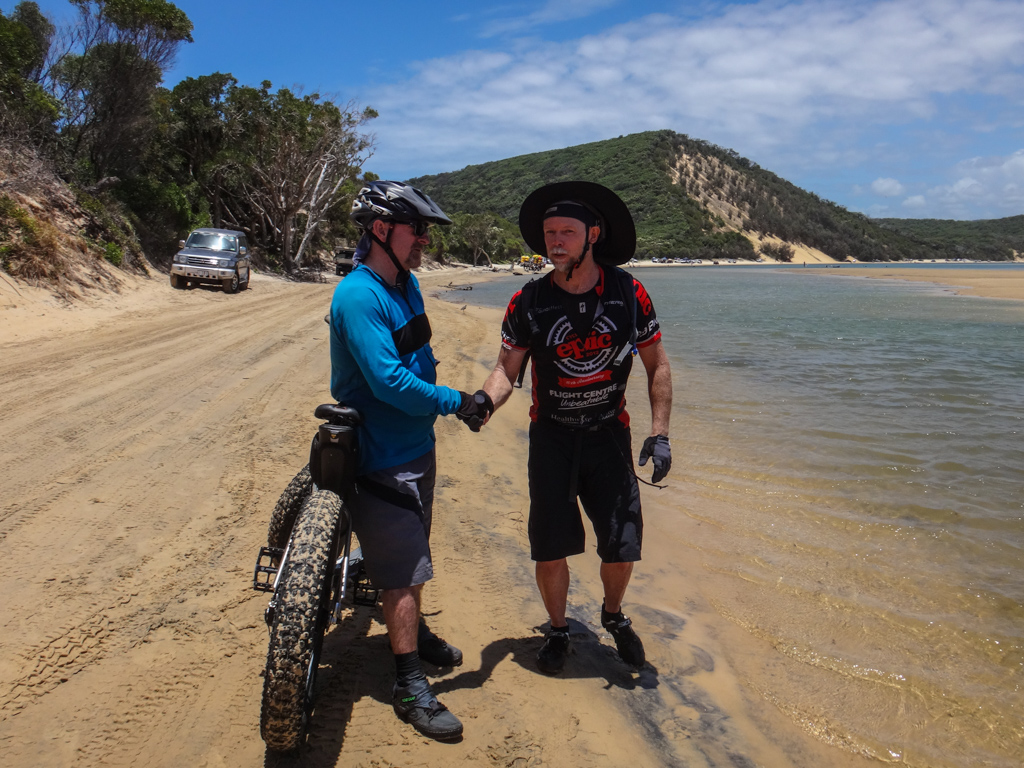 Darb and I decided we didn’t feel like dragging the bikes through salty water.

We thanked Jason for being such a hospitable host, and decided to leave him here and make our way back to town. 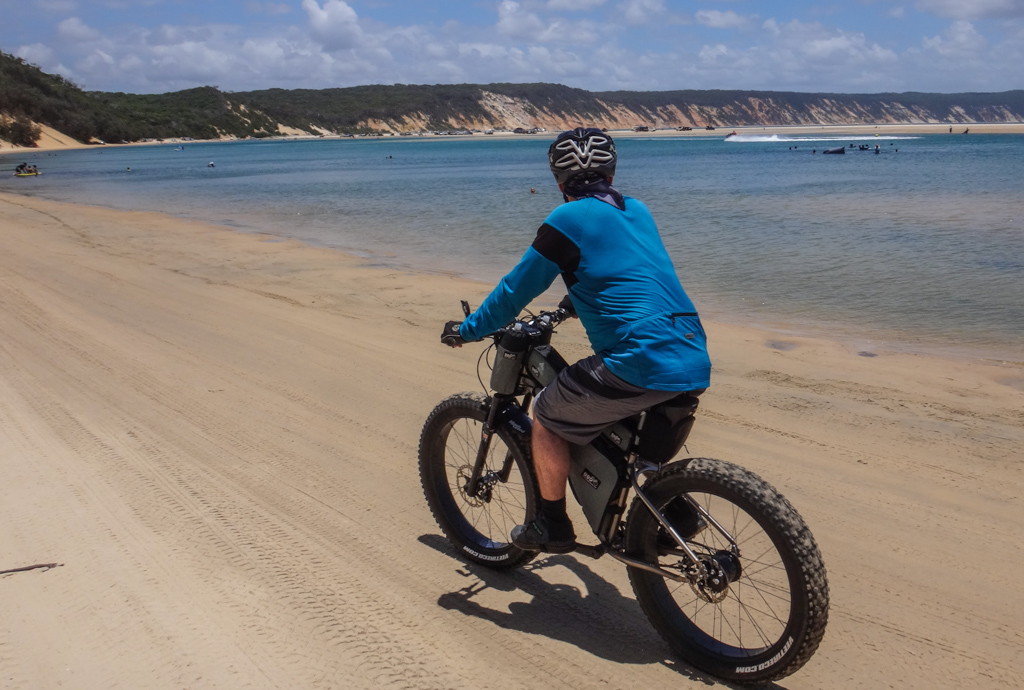 The imposing orange cliffs stretched to the horizon 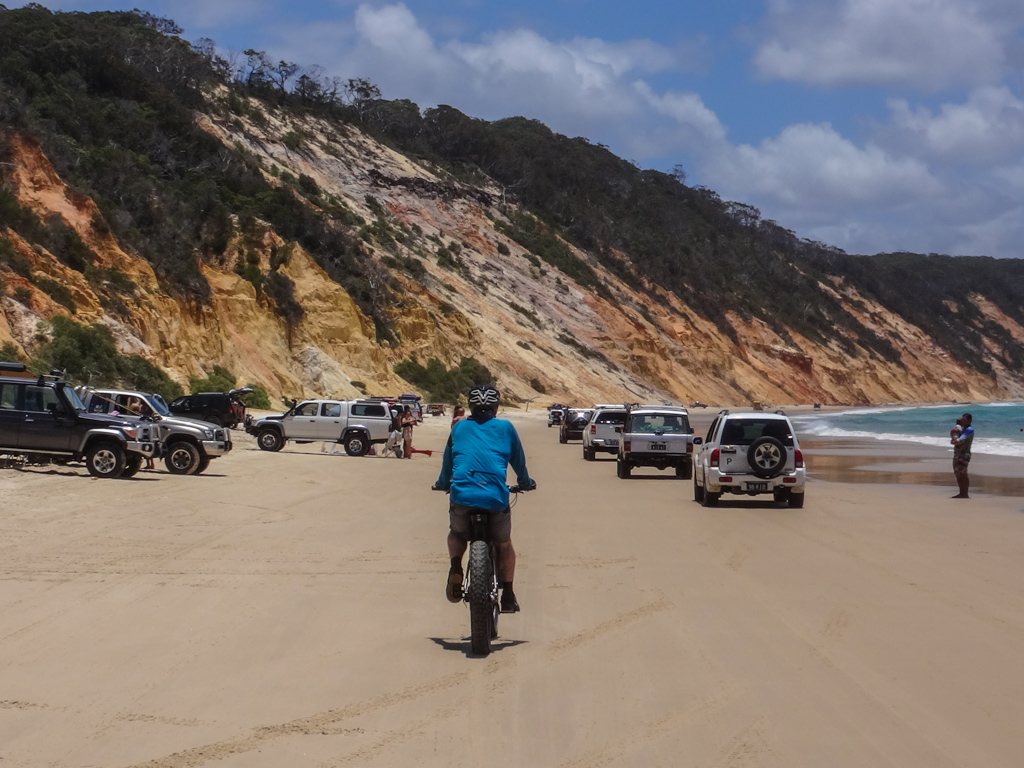 Dozens of cars decided they’d also try to get back to town before the rising tide blocked the beach. 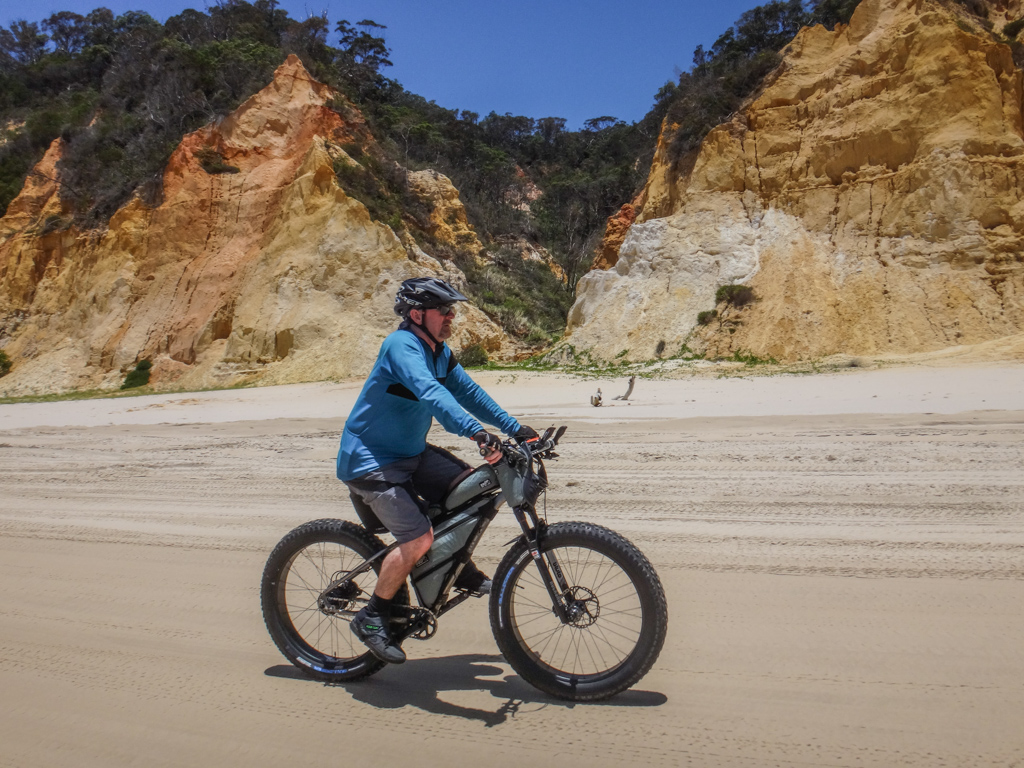 After the hills, twists and turns of the forest trails, it was a pleasant relief to ease along the flat beach with the wind at our backs. 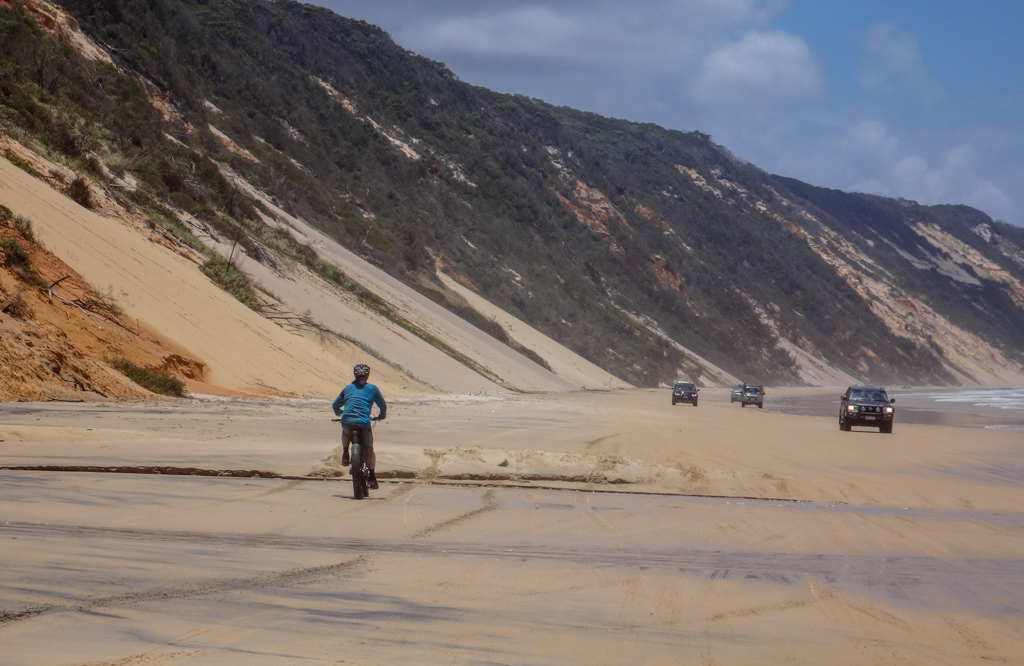 Fresh streams gurgled out of the base of the cliffs, forming wash-outs in the sand.  We bumped and splashed through dozens of small streams. 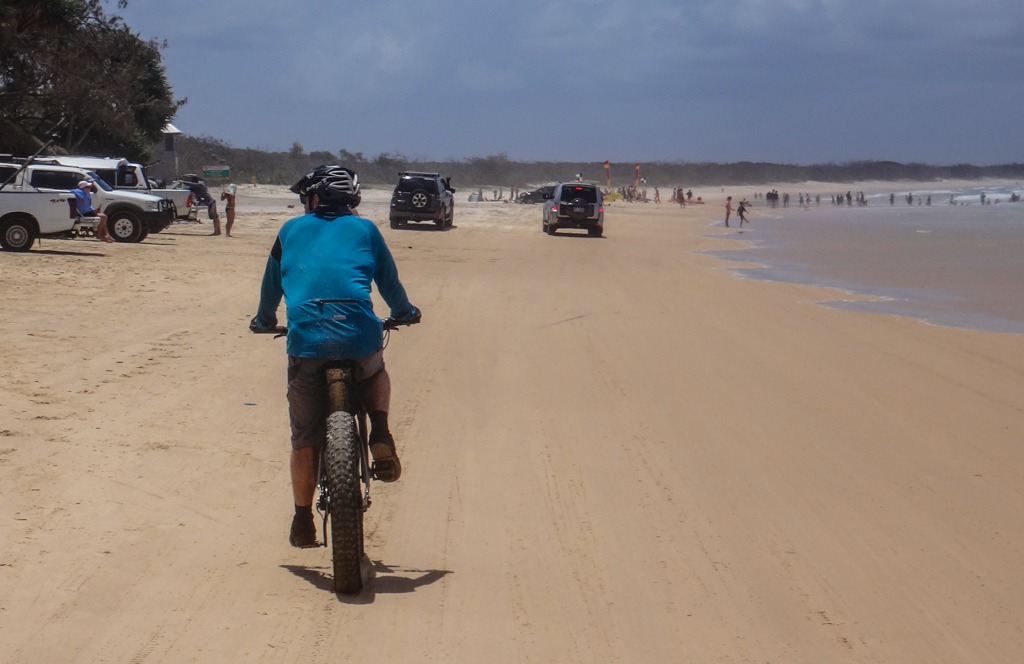 We timed it perfectly, arriving in Rainbow Beach with the incoming tide just starting to splash the bikes and the midday sun now beating directly overhead.

We rode 36 kilometres in about four and a half hours. During that time we climbed about 630 metres in elevation and I burned about 2,050 kcal. This is a challenging summer ride. We had initially intended to cover fifty kilometres today. I’m glad we didn’t. Riding here is all about soaking up the views and enjoying the magic of those imposing cliffs. To do that properly you need plenty of time.

Thanks Jason and Darb for another fun day on the bikes in spectacular surroundings! 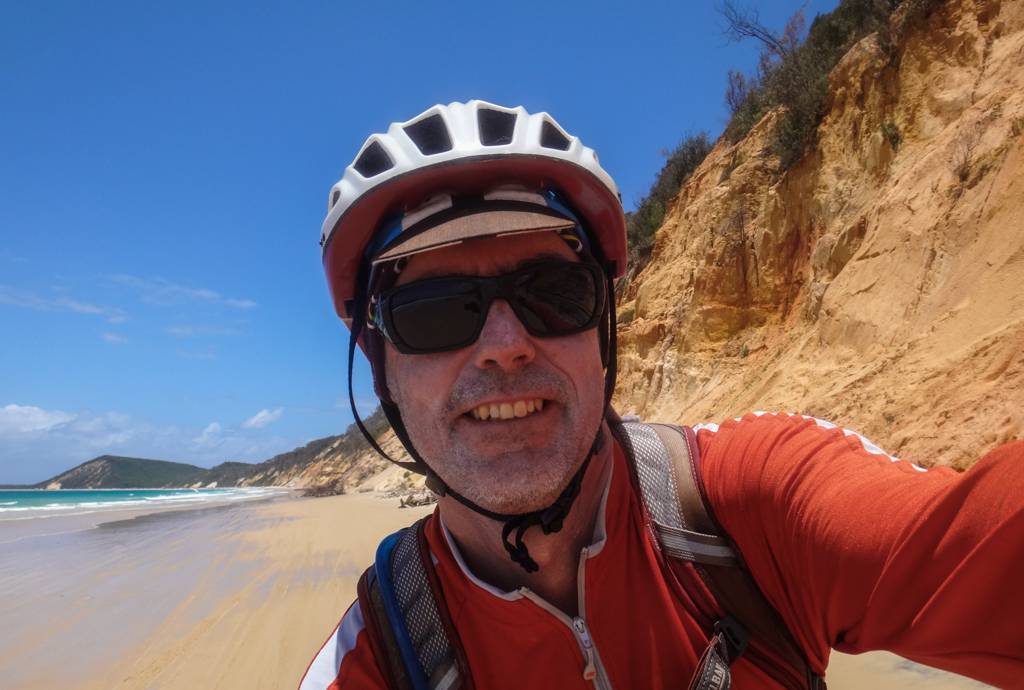