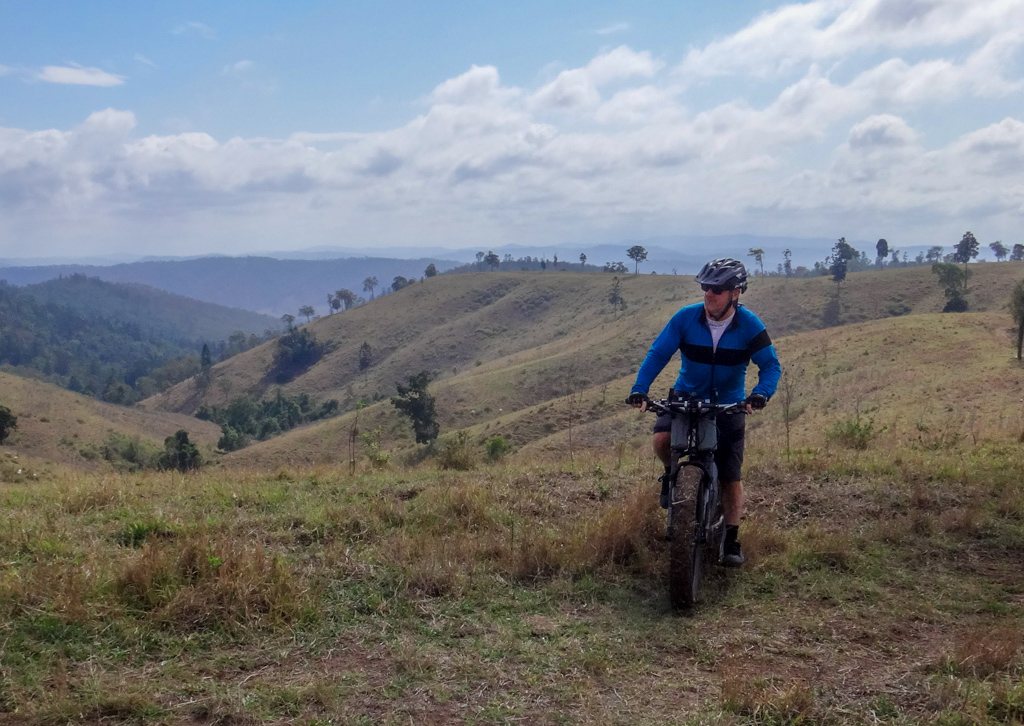 Sandy Creek is a small tributary of the Brisbane River which flows down the Great Dividing Range from Benarkin. Today we decided to follow it up the range into the vast plantations at the top, then roll back down to our starting point. 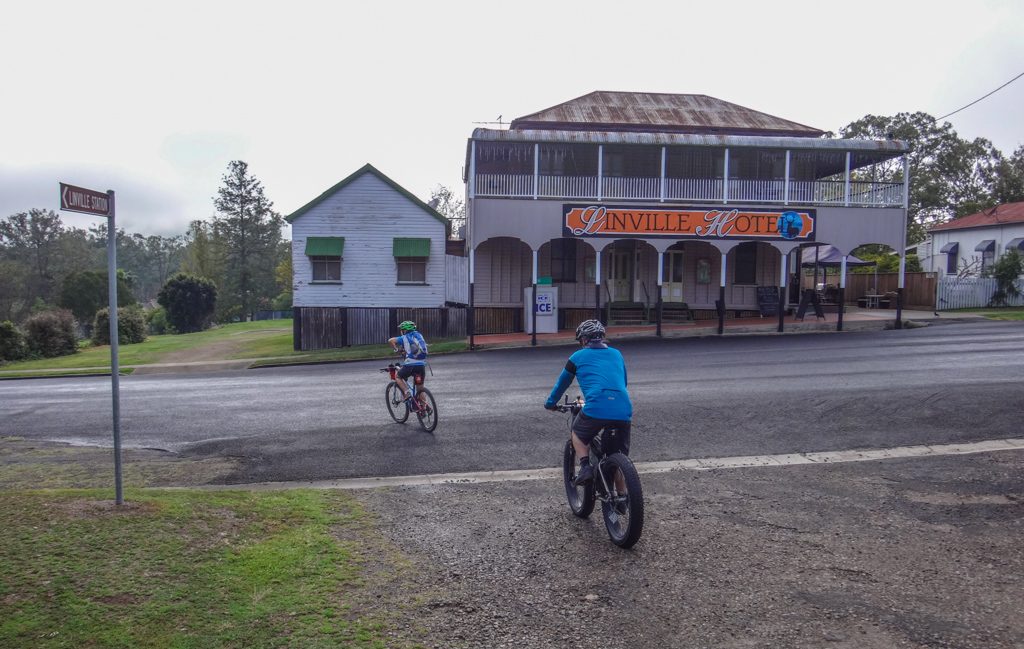 We started from the small hamlet of Linville, but instead of riding up the rail trail, we followed the road north out of town. 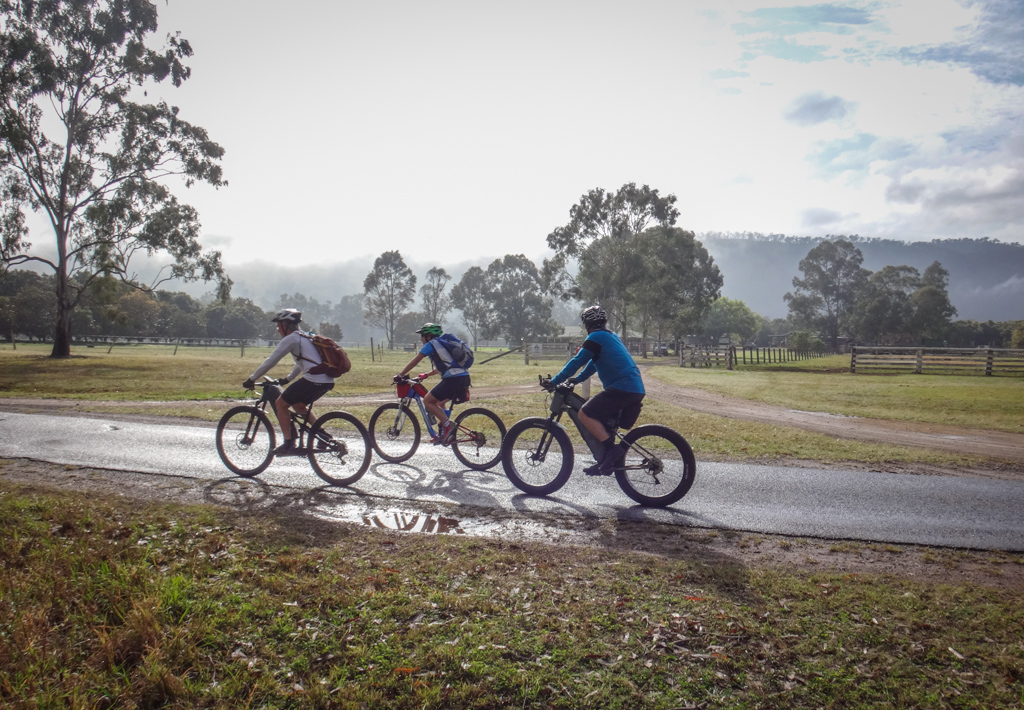 Overnight rain had left the morning air laden with mist.  It slowly lifted from the nearby hills. 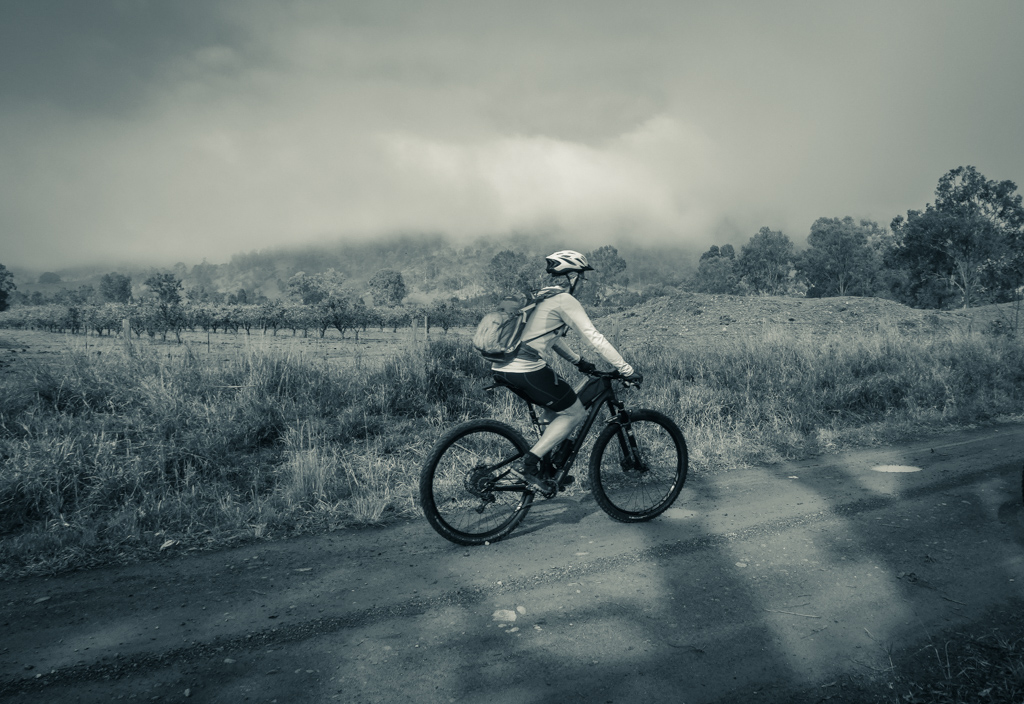 After about five minutes we turned into Sandy Creek Road and followed the gravel track up the valley.

A while go, Darb and Calum had ridden down this road after riding part of the way with us on our bikepacking trip to the foothills of the Bunya Mountains.  When Eric heard how much fun they had he suggested we return and check it out. 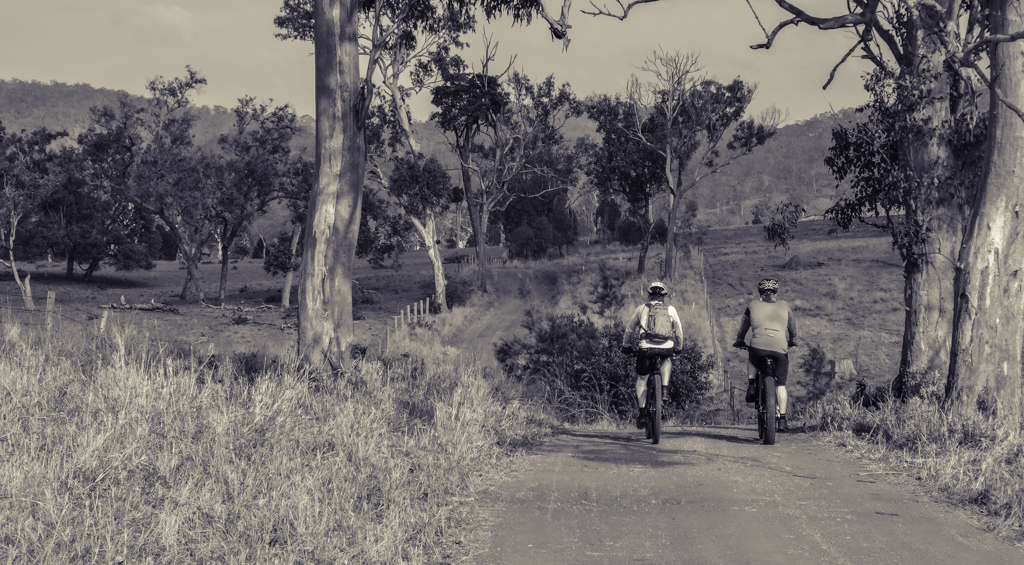 The road undulated gently over rolling hills as we progressed up the valley. 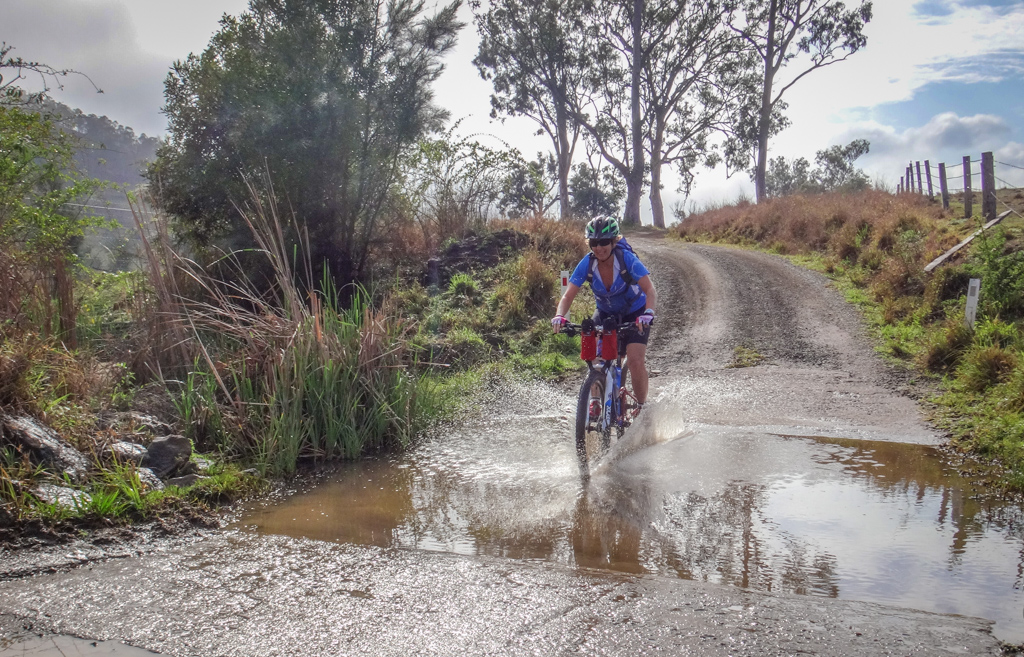 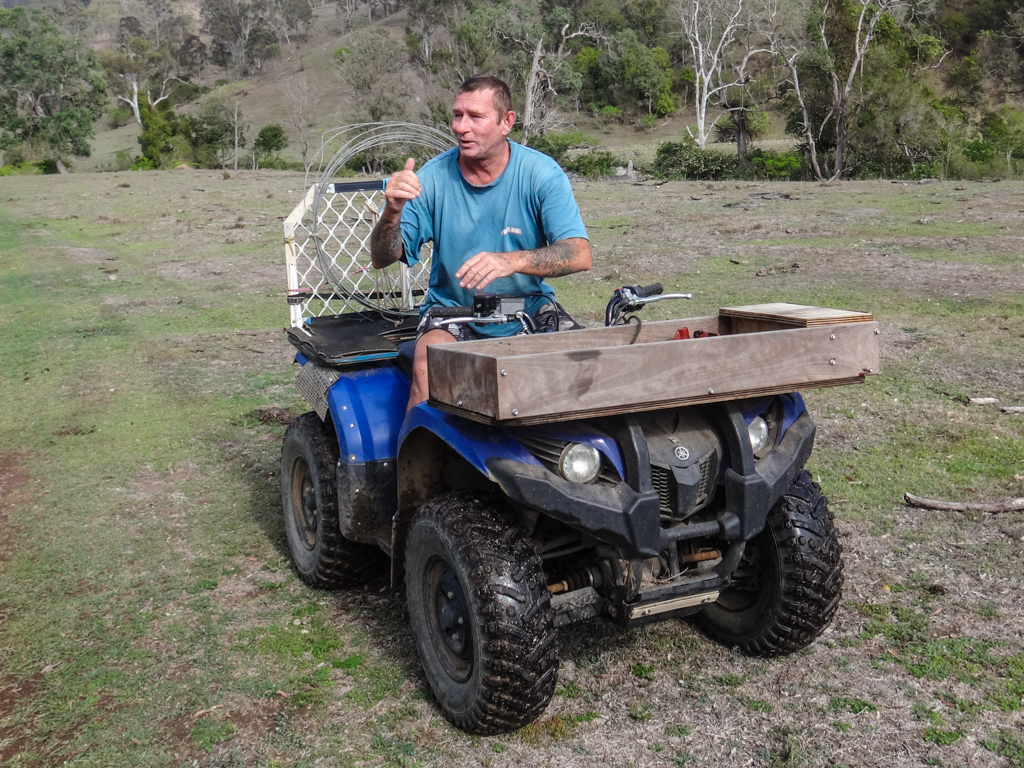 The local farmer rolled up on his quad bike to say G’day.  He looked amused when we told him where we were headed. 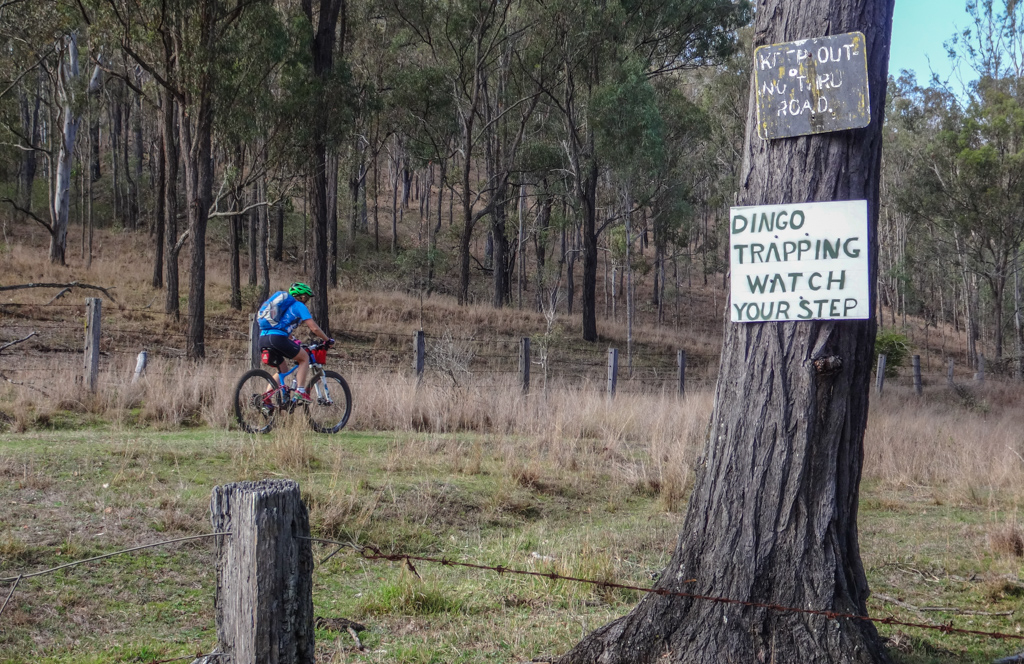 Like all fun trails, our gravel road devolved into a faint track as we followed Sandy Creek up the valley.  We were careful to avoid the dingo traps. 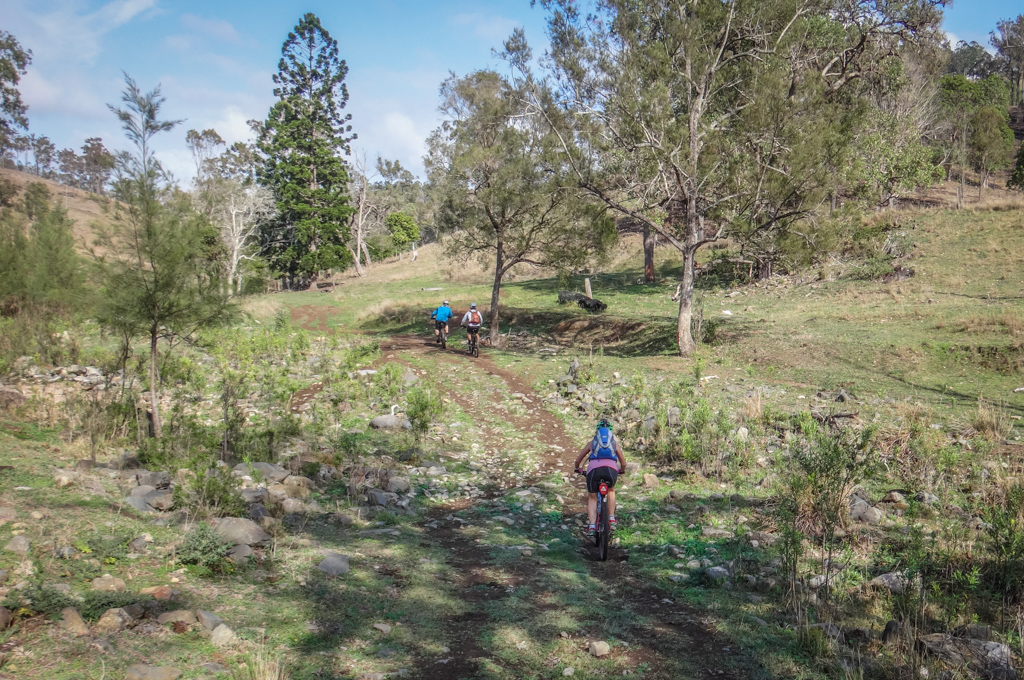 At the end of the valley our course had morphed into a cow track through rocky creek beds.  Then it ran out, and we were forced to backtrack slightly and follow a different trail up the hill.

Steep hills surrounded the end of the valley.  We followed one track upwards.  It was un-rideable.  It was almost un-walkable too. 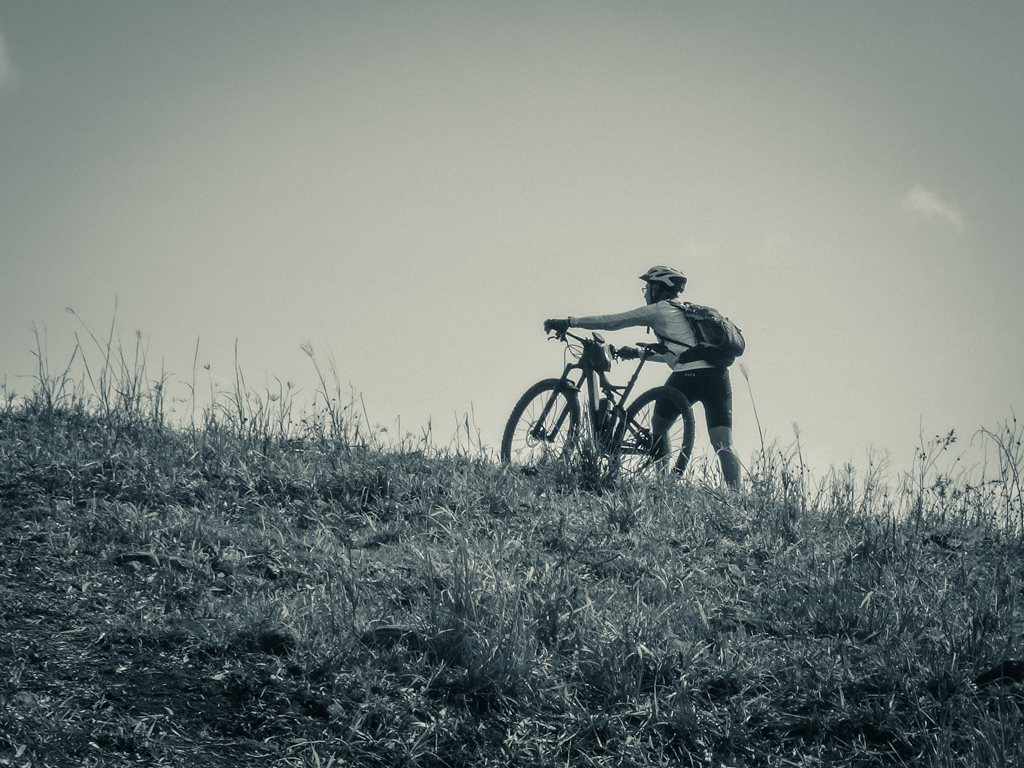 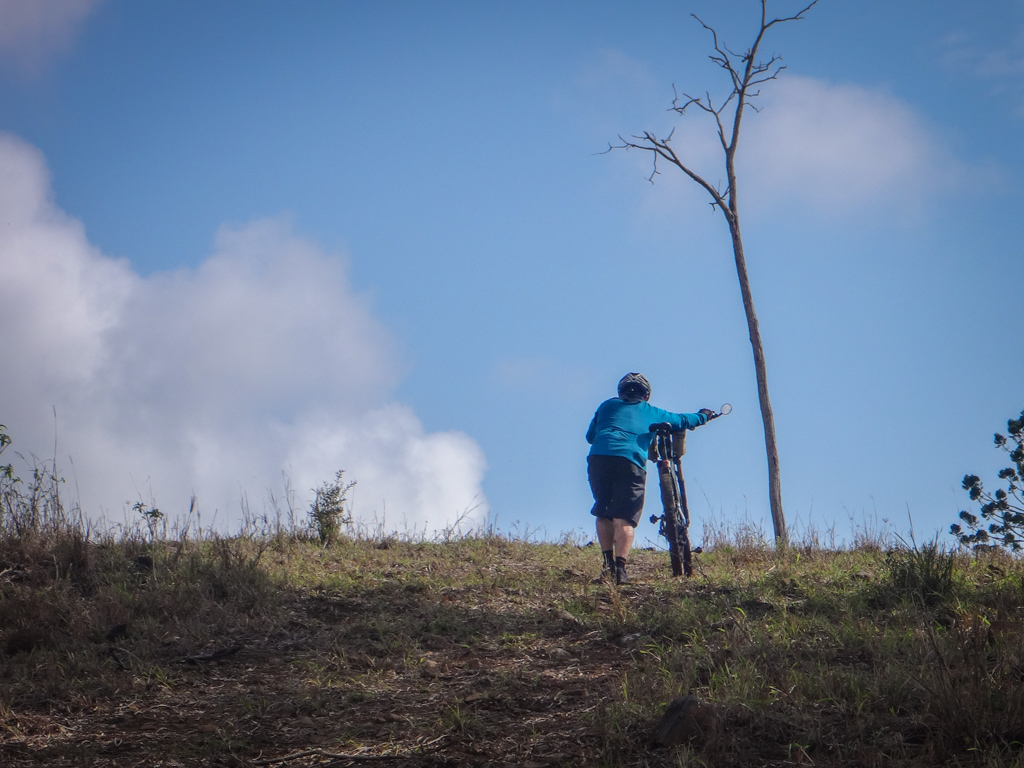 We climbed, gasping for air and with aching calf muscles.  Eric and Darb reached the top of the hill first, then generously came back down to help Kaye and me push our bikes.  Thanks guys! 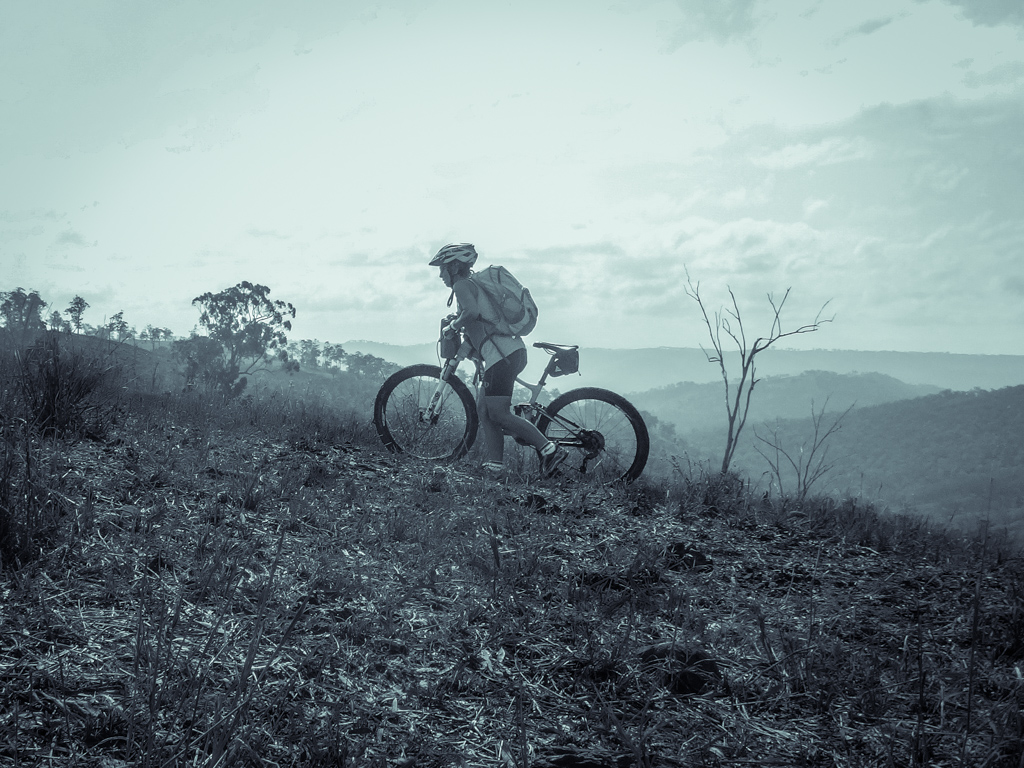 As we climbed, the valley slowly spread out below us. 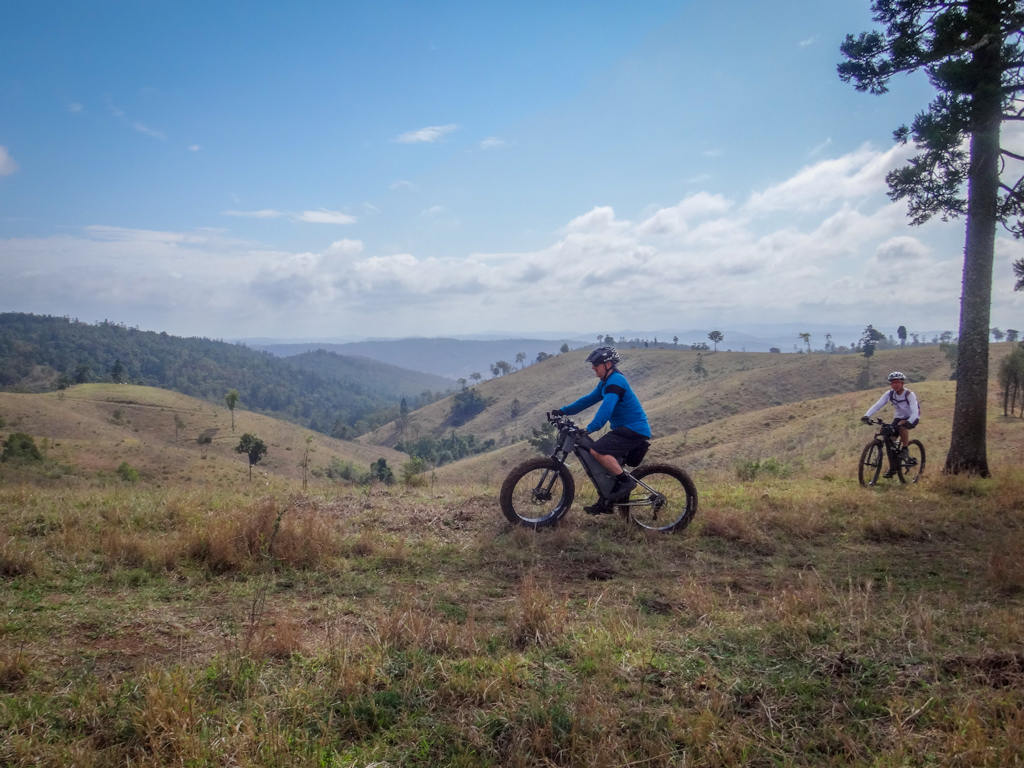 The morning mist had finally lifted.  Below us the Brisbane River snaked around rolling hills.  The Conondale Range framed the distant horizon.

Compared with other routes, this was a tough way to get up the range, but the views were worth it. 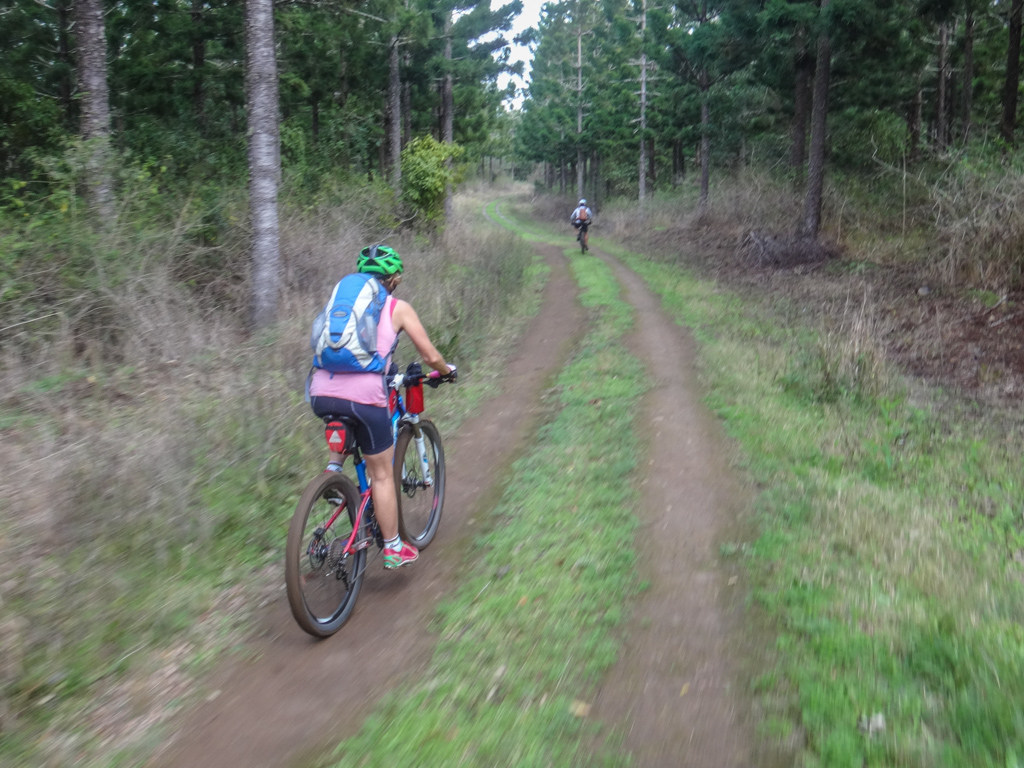 After we clambered over the forestry gate on the top of the hill, the landscape changed drastically. 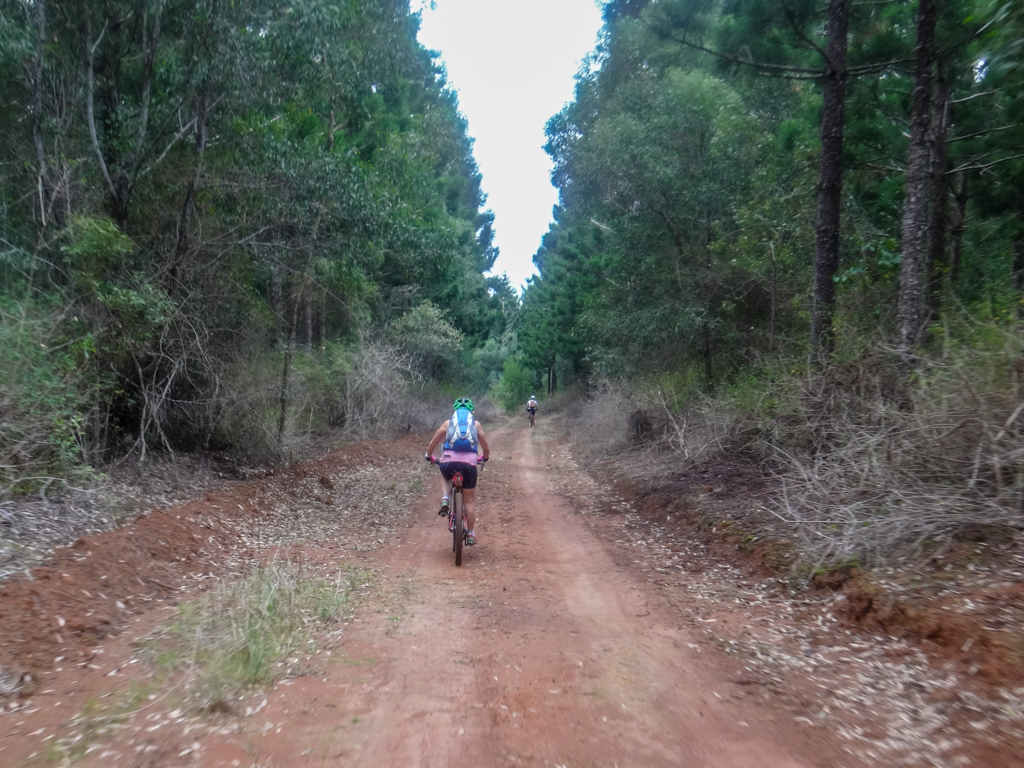 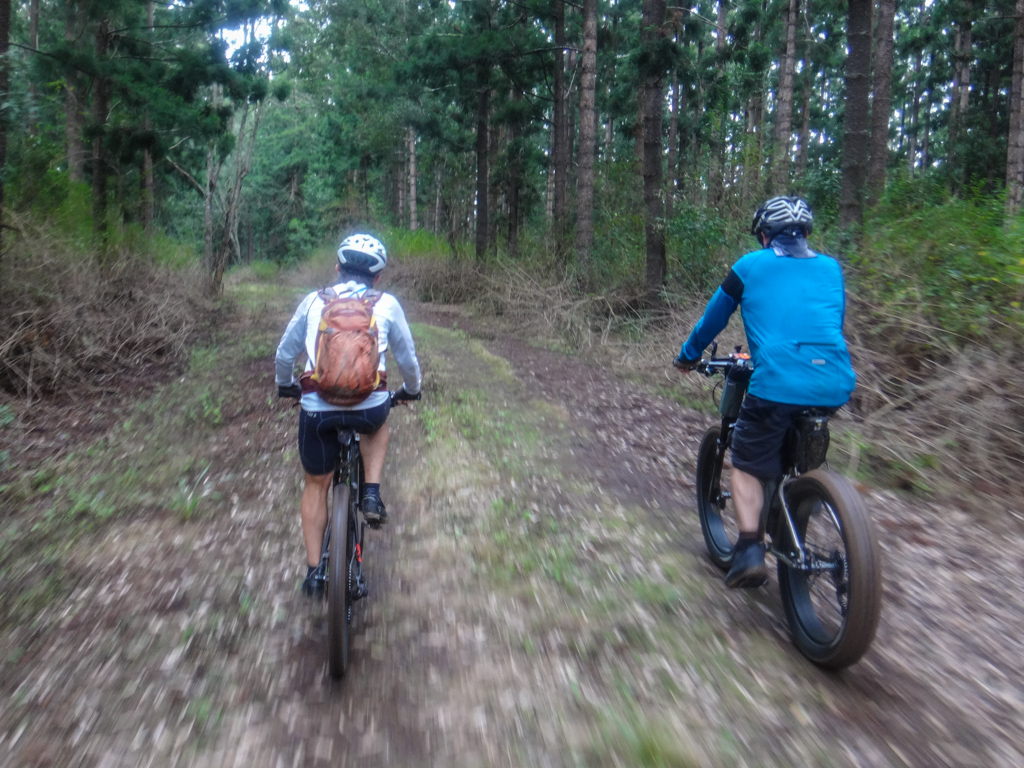 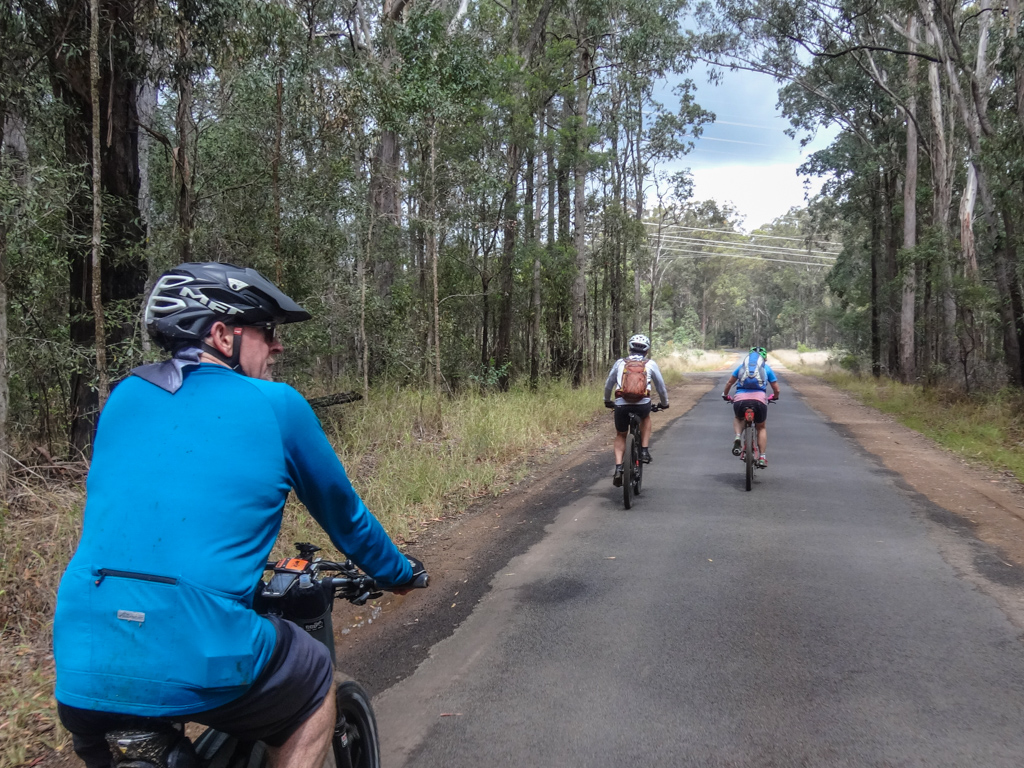 I had planned our course to follow a large leisurely loop through the northern section of Benarkin Forest, ending at the small town of Benarkin. 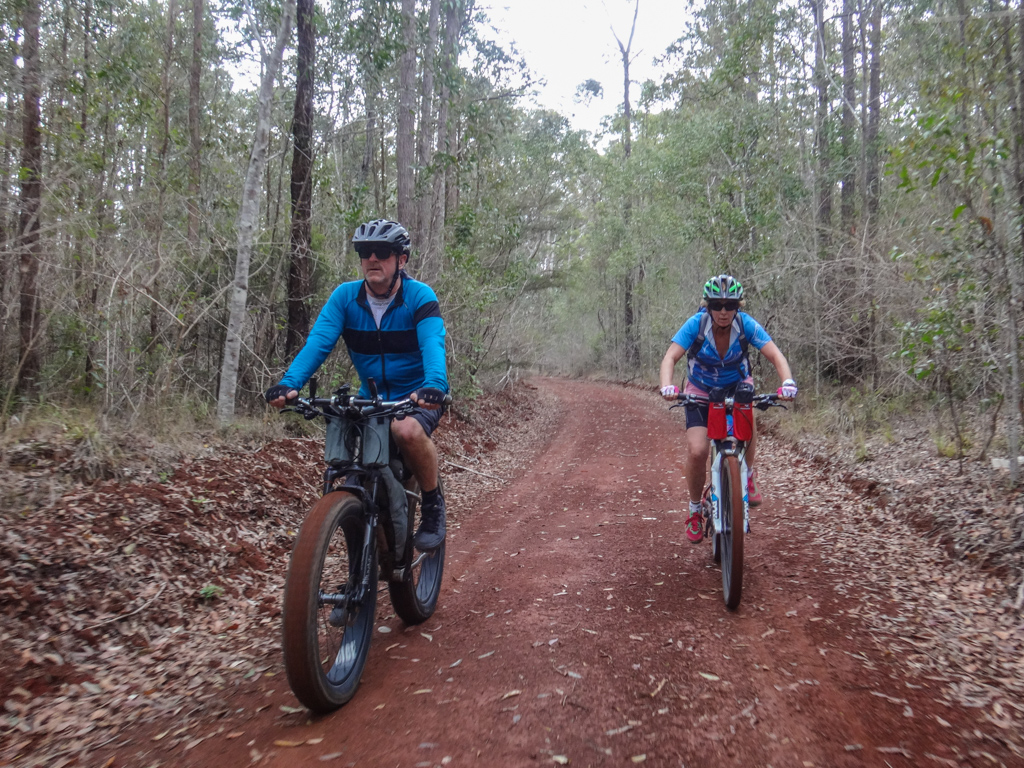 Like any good mountain biker, when planning the course I favoured dirt tracks over paved roads.

“This is nice,” I said as we turned off the bitumen down a red clay track. 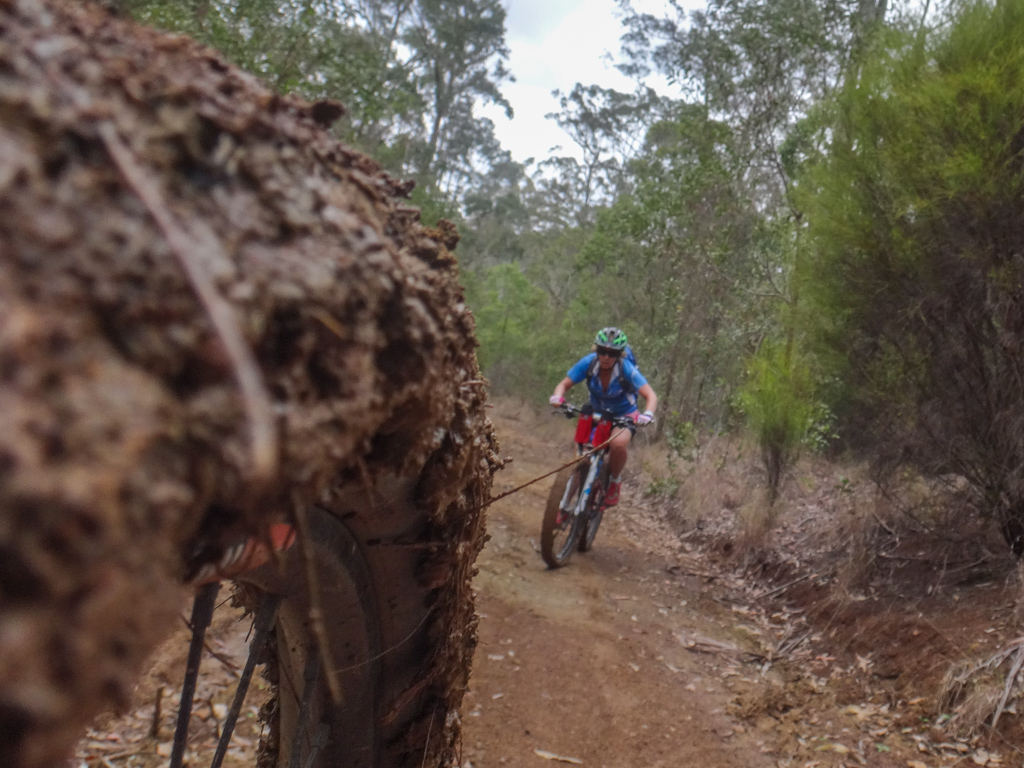 Overnight rain had softened the clay, turning it into a thick sticky glue.  It clung to our tyres and shoes.  It clogged our wheel arches.  Even when we stopped pedalling, and pushed the bikes, the wheels would clog up.  Every ten metres we would have to stop and pull clumps of clay from the wheels and chain. 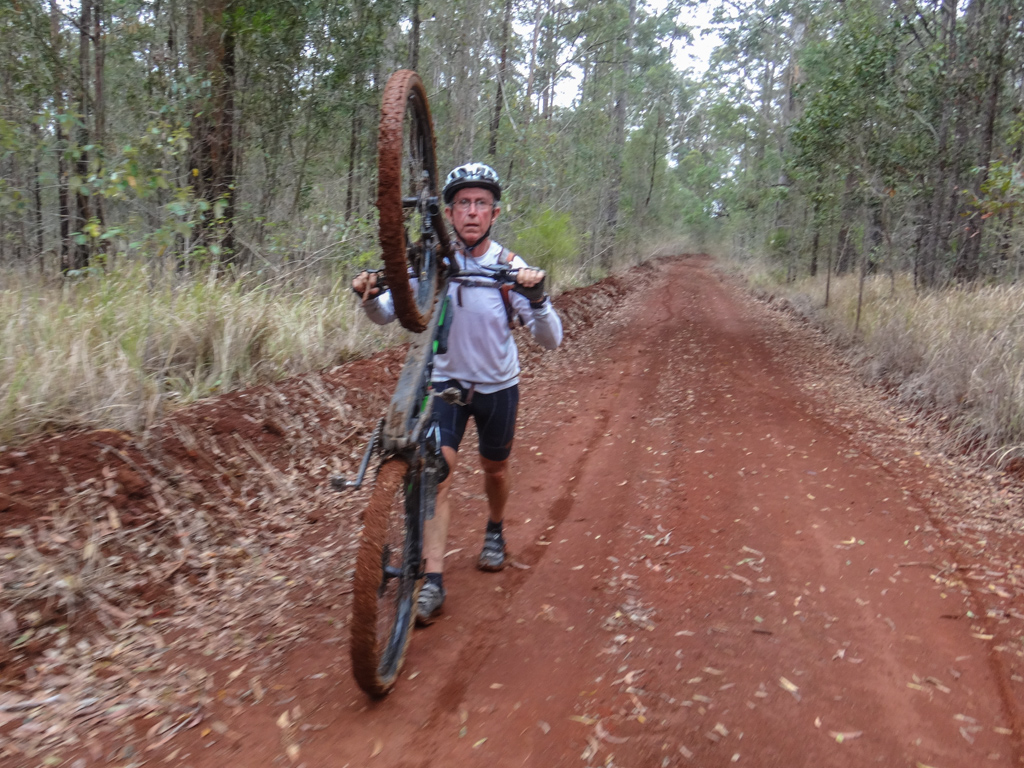 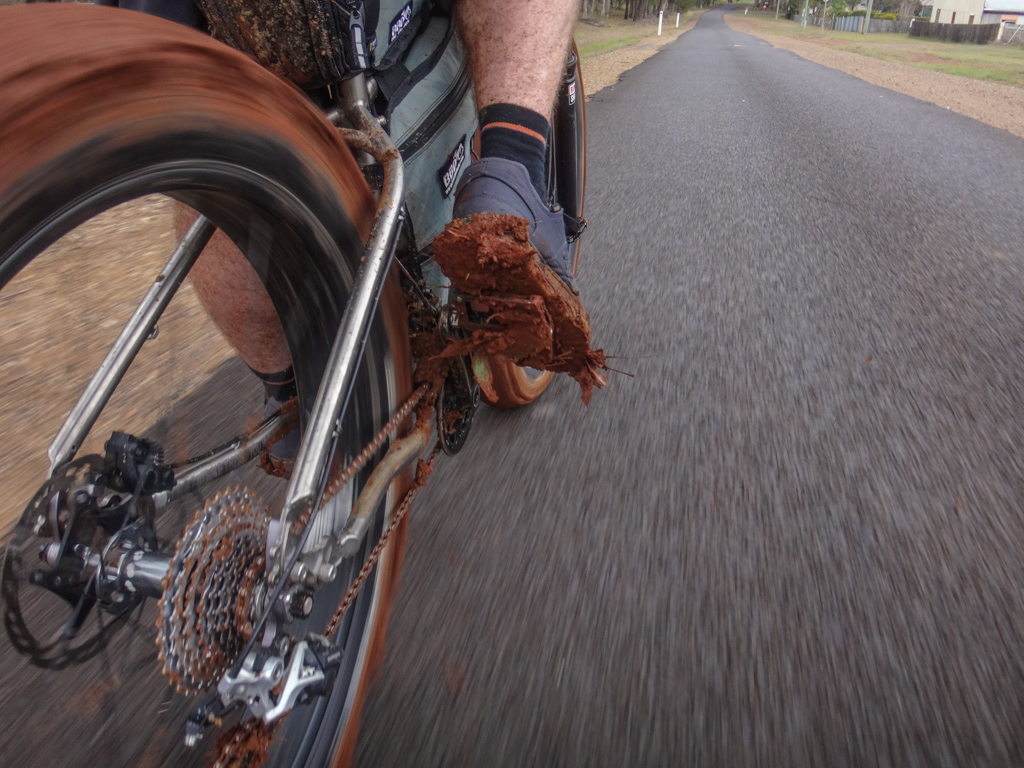 Eric pushed his bike on one wheel to reduce the work.

Darb’s huge fat tyres picked up loads of mud.  Like strange snow shoes, his soles built up thick platforms of red.  When we finally reached the paved road again huge clumps of clay flew off his wheels into the air.

Eric lent me a dollar to put in the water vending machine.  I tried to hose down my bike, but the water stream wasn’t fine enough.  I did a fantastic job of saturating myself without washing any mud from the bike.  Everyone else enjoyed the show. 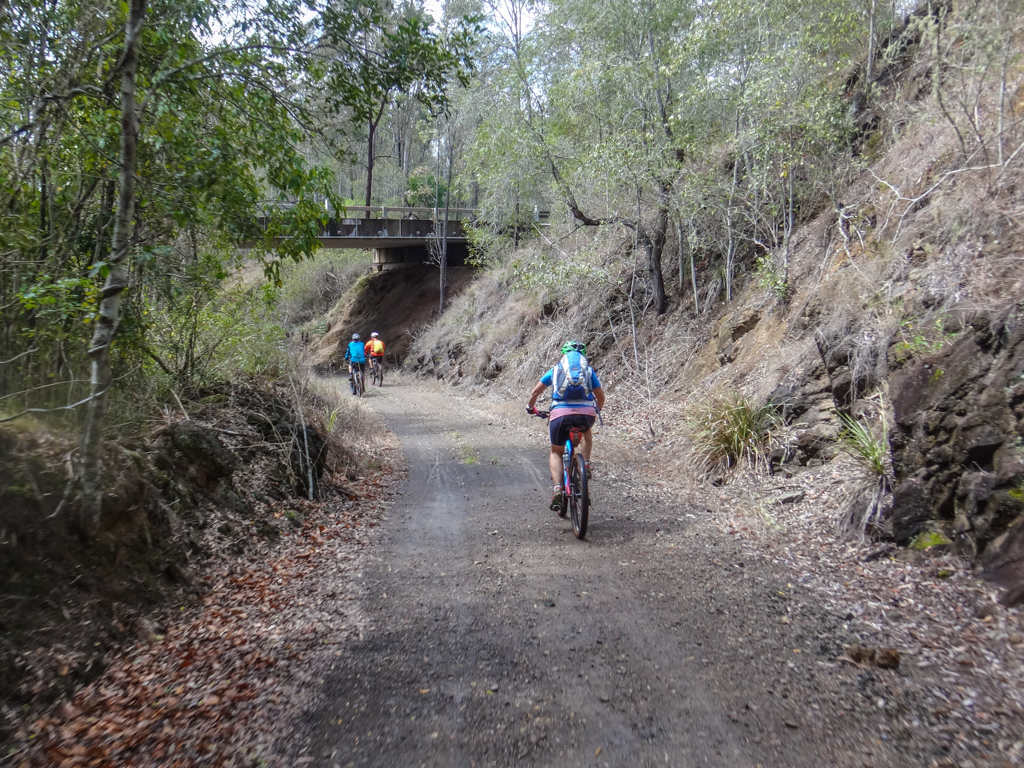 We had planned to finish our ride through more forestry plantations.  But we had ridden those roads before and remembered that they also were clay-based, and would probably be muddy as well.

So we decided to play it safe and finish our ride by rolling down the Brisbane Valley Rail Trail (BVRT) back to Linville. 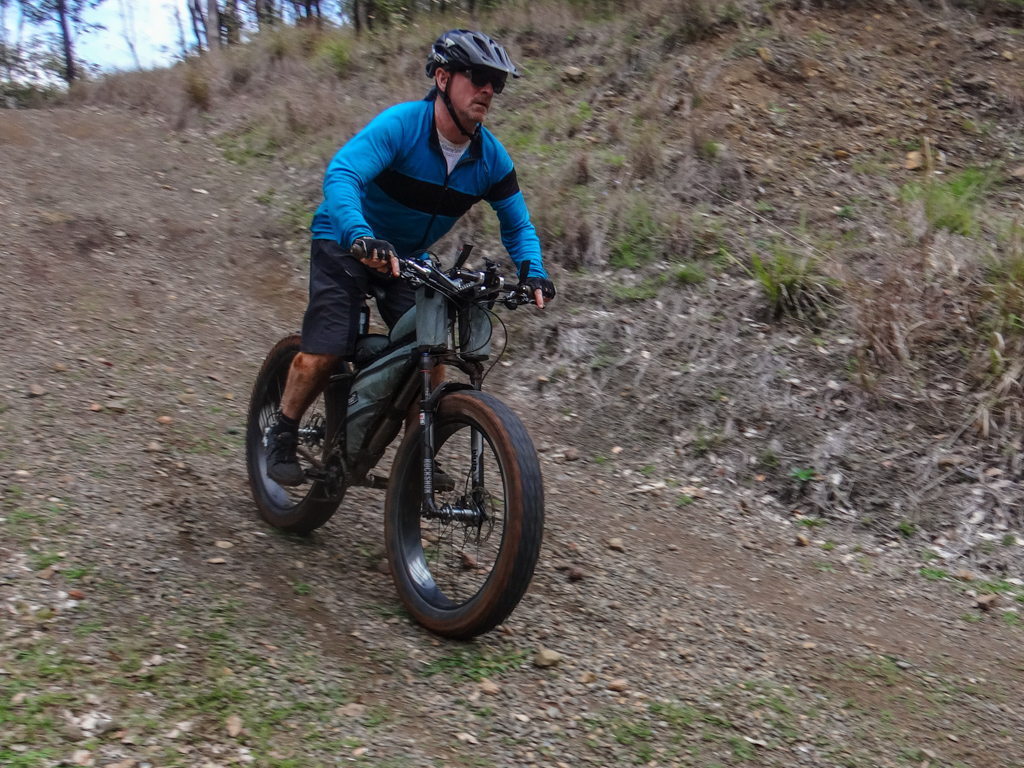 It’s an effortless ride. For twenty kilometres the trail just follows a gentle downhill gradient back down the range. 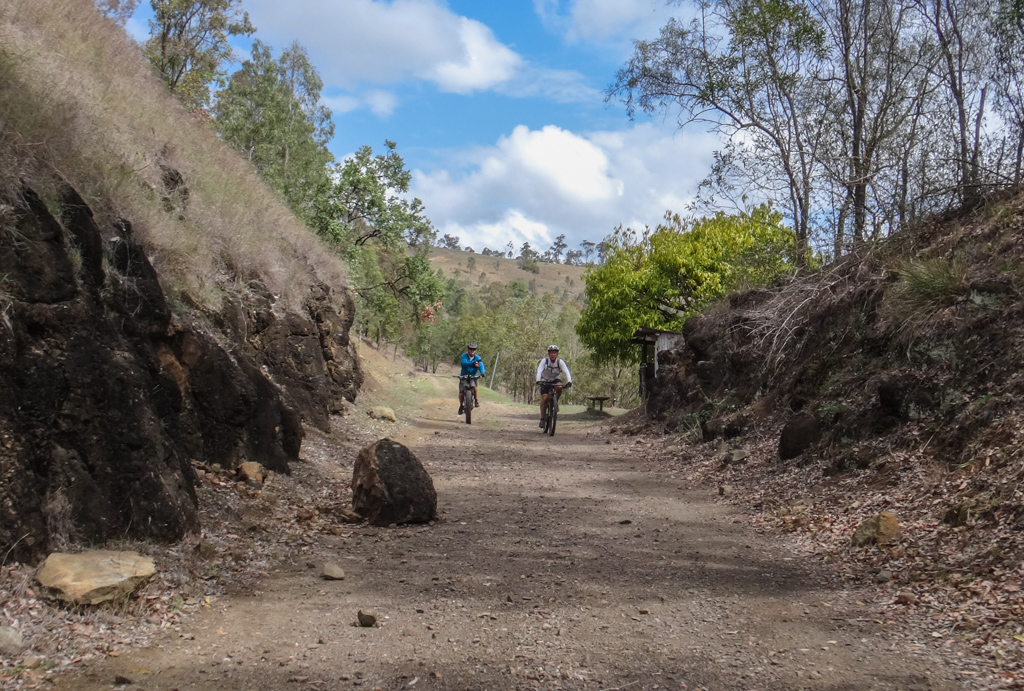 We dodged cow-pats, stray boulders and gates as we coasted back. 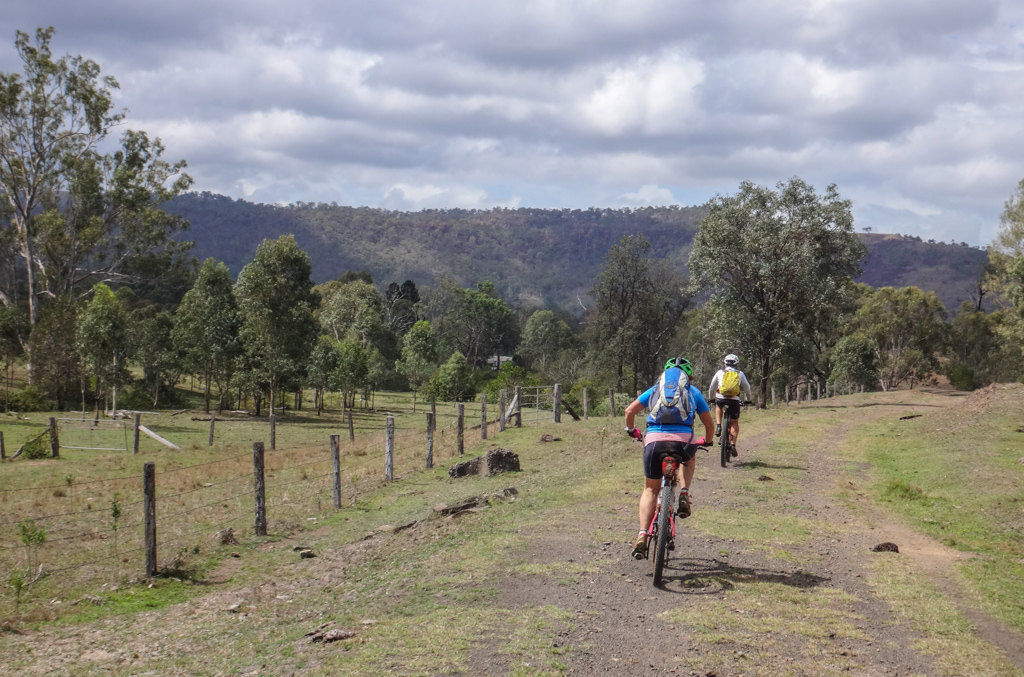 It wasn’t how we originally planned to end our adventure, but we were grateful for the flat dry surface of the BVRT. 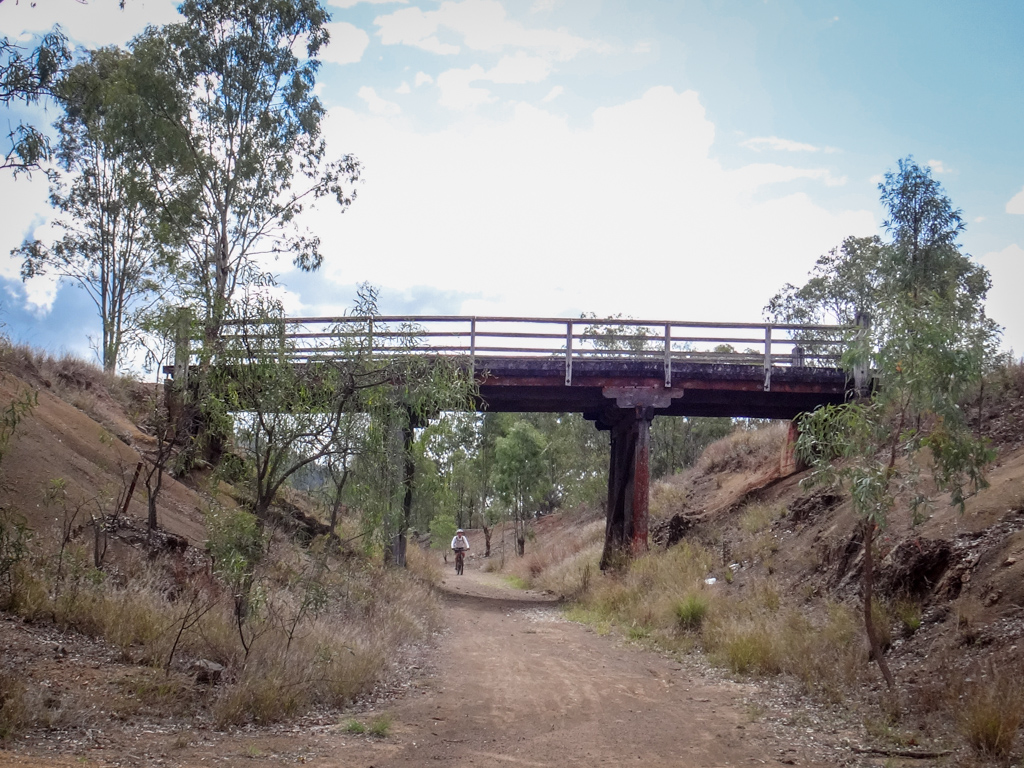 After all our hard work to climb the range, it only took us a little over 30 minutes to roll back down again from Benarkin to Linville.

Here’s a quick 60 second video of our ride back down.

Because of the tough climb at the end of Sandy Creek and the mud, I’ll rate this one 8 out of 10 on the tough-o-meter.

Thanks Eric, Darb and Kaye for another fun ride!