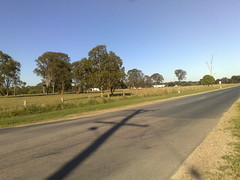 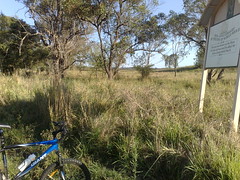 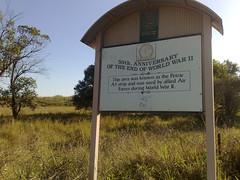 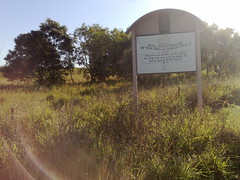 There were three airfields in the Pine Rivers area during World War 2.

Most people are aware of the “Spitfire Avenue” Airstrip, also known as the A2 Strip in Strathpine. It was paved, and used heavily.

But not many people are aware of the A1 grass Strip which was built in the vicinity of Lawnton Pocket and Bells Pocket Roads.

It wasn’t paved, and was built as an emergency strip at an angle of about 60 degrees to the A2 strip. When planes were unable to land on the A2 strip due to wind, they could use the A1 strip.

Nothing much of it remains today. You can’t see any sign of it, except for the memorial erected by the council in 1995.

But the land is pretty flat!

There’s also a third strip south of here in Brendale. The A3 strip. One of these days I’ll ride down there and photograph it too!

In the meantime, I won’t have to try too hard to imagine the drone of Spitfires flying over my house.

UPDATE: I’ve just discovered Peter Dunn’s excellent Australia @ War site. He records that in 1942 2nd Lieutenant Maxwell J Jones (0429769) was tragically killed when his P-400 aicraft struck a tree while landing at the A1 airfield. Peter writes that the airfield was dangerous due to the fact that it was surrounded by large trees, and pilots often had to fly in an “S” shaped path on approach to the airfield in order to keep it in view – something that was very dangerous at low speed and low altitude.

One Reply to “Spitfires over Lawnton”