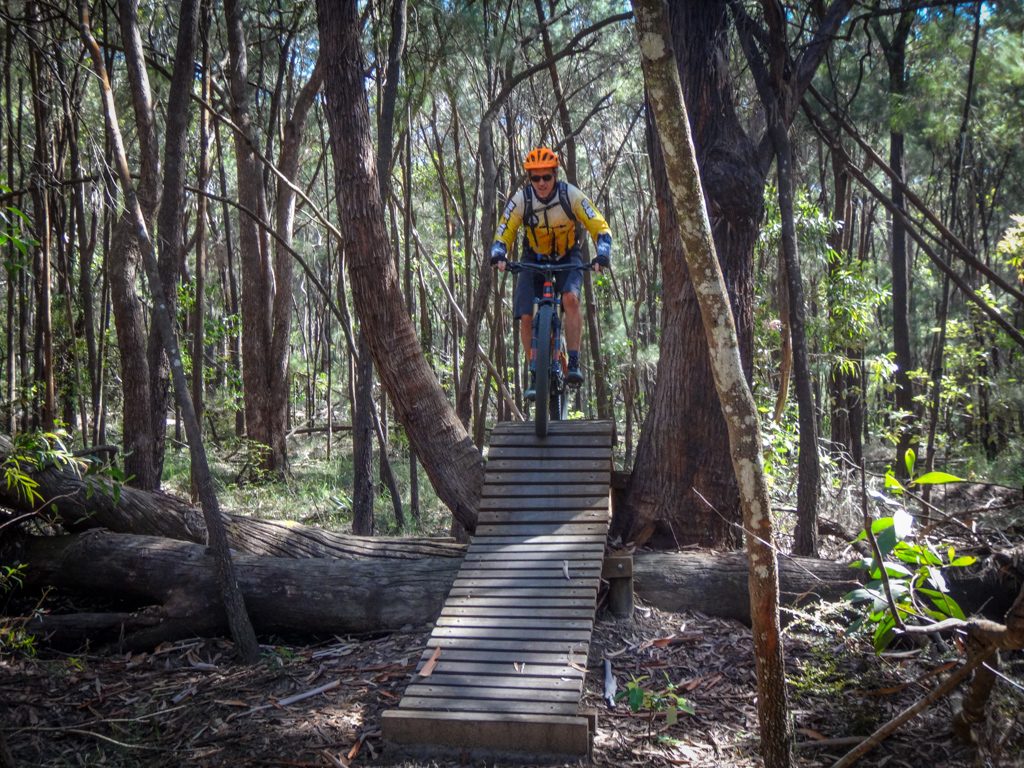 Good things come in small packages.  Sugarbag Road is a small parcel of bushland in Caloundra which contains a wonderful variety of mountain biking tracks. 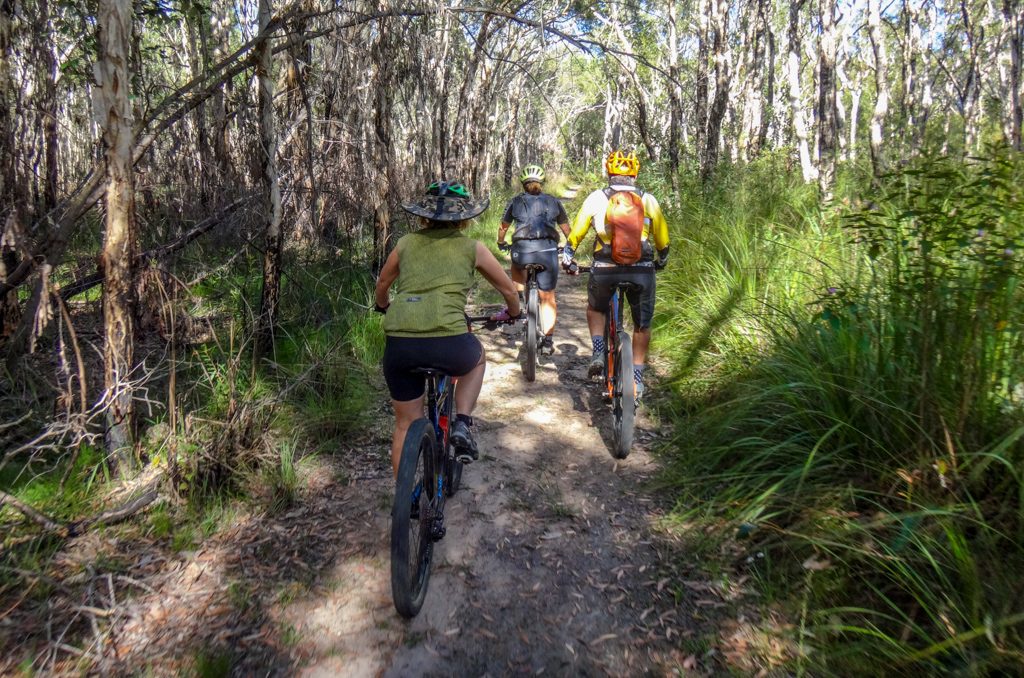 When they discovered I was taking a short beach-side break in Caloundra for the weekend, my friends Clare and Mike kindly offered to show us around their local trails. 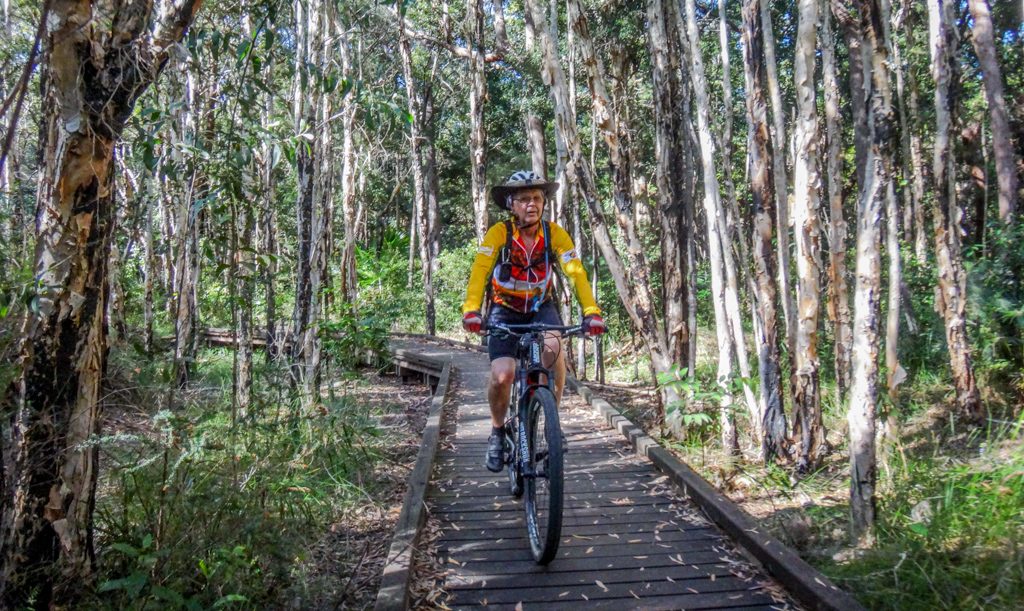 A few minutes after riding off from the beach-side car park, we left suburbia and followed a boardwalk through the paperbark forest at Ben Bennett Botanical park.

I didn’t know this place even existed.

While avoiding busy roads, it offered a convenient shortcut to the Mountain Bike trails. 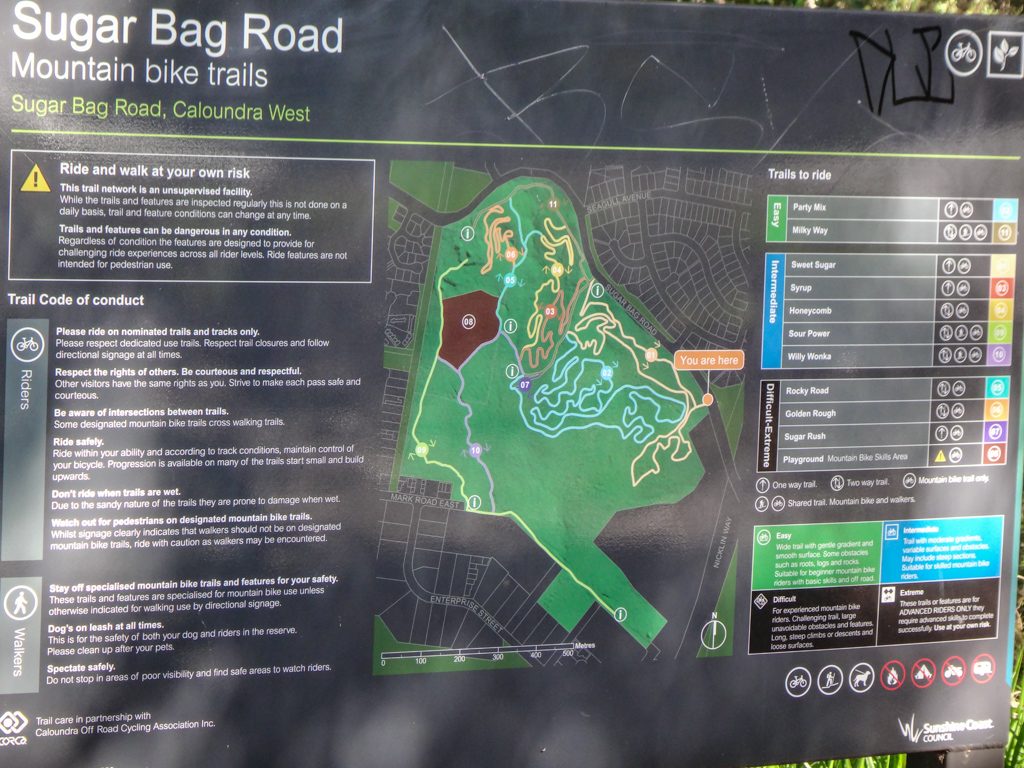 Like Doctor Who’s Tardis, Sugarbag Road is bigger on the inside than what it appears on the outside.

The parcel of land is only half a square kilometre (50 hectares) in area, but it contains almost fifteen kilometres of flowing single track, suited to all ages and abilities. 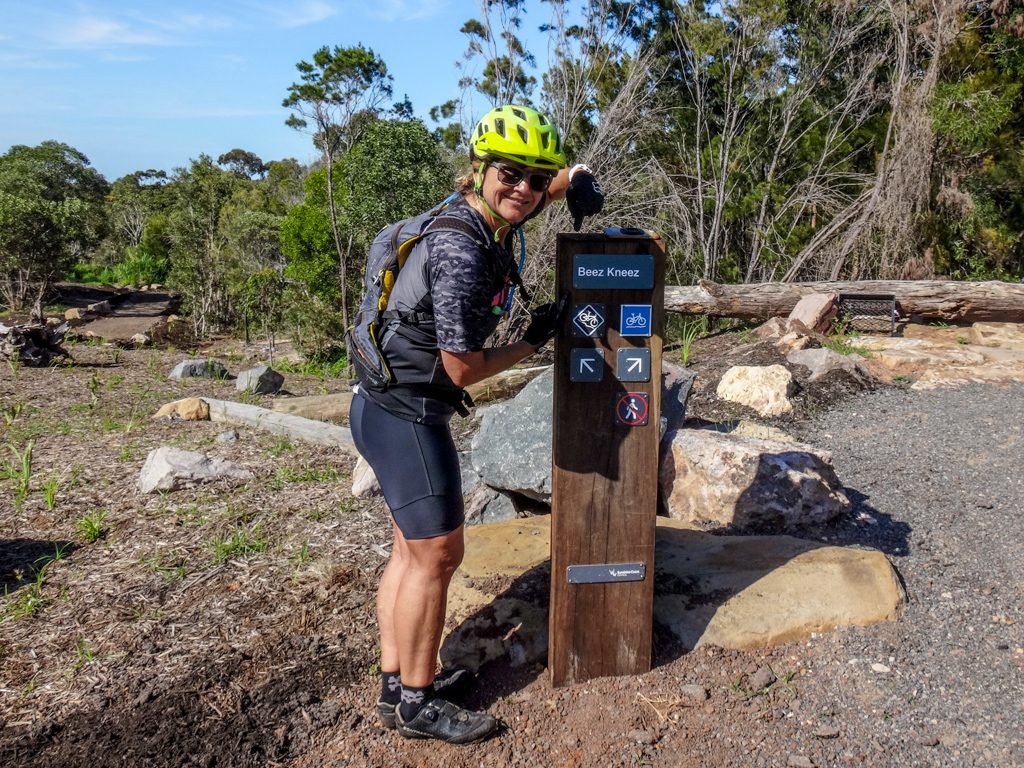 Clare and her friends in CORCA worked tirelessly in conjunction with the Sunshine Coast Regional Council to develop this trail network.  She and Mike were keen to take us for a spin.

Named after stingless native bees whose hives can still be found in the forest, all of the tracks have sugar or confectionery-related names like “Bees Knees”, “Sweet Sugar”, “Syrup”, “Willy Wonka” etc.

We started off riding down “Golden Rough” with its exciting collection of log roll-over “features”.

Mike has ridden over most of these obstacles dozens of times.

They all have “B-lines” which lets gumbies like me ride around them if you’re not completely confident of making it to the other side. 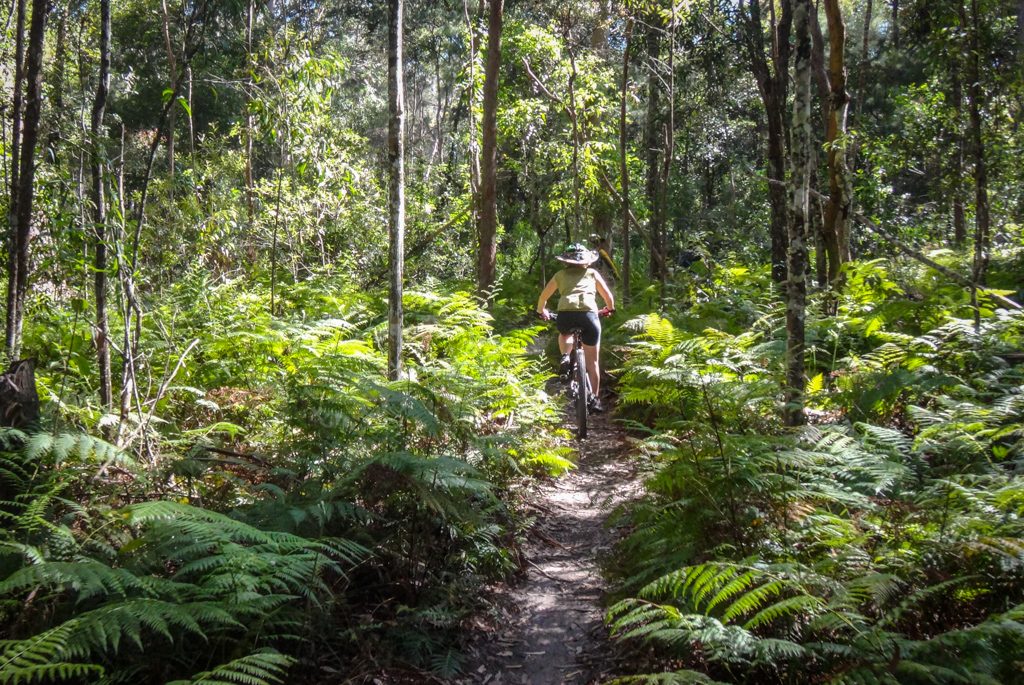 The “Party Mix” trail was a bit more sedate and gave me a chance to relax.

As we meandered through its shady groves of bracken ferns , I yelled out to Kaye  “Hey I like this!” 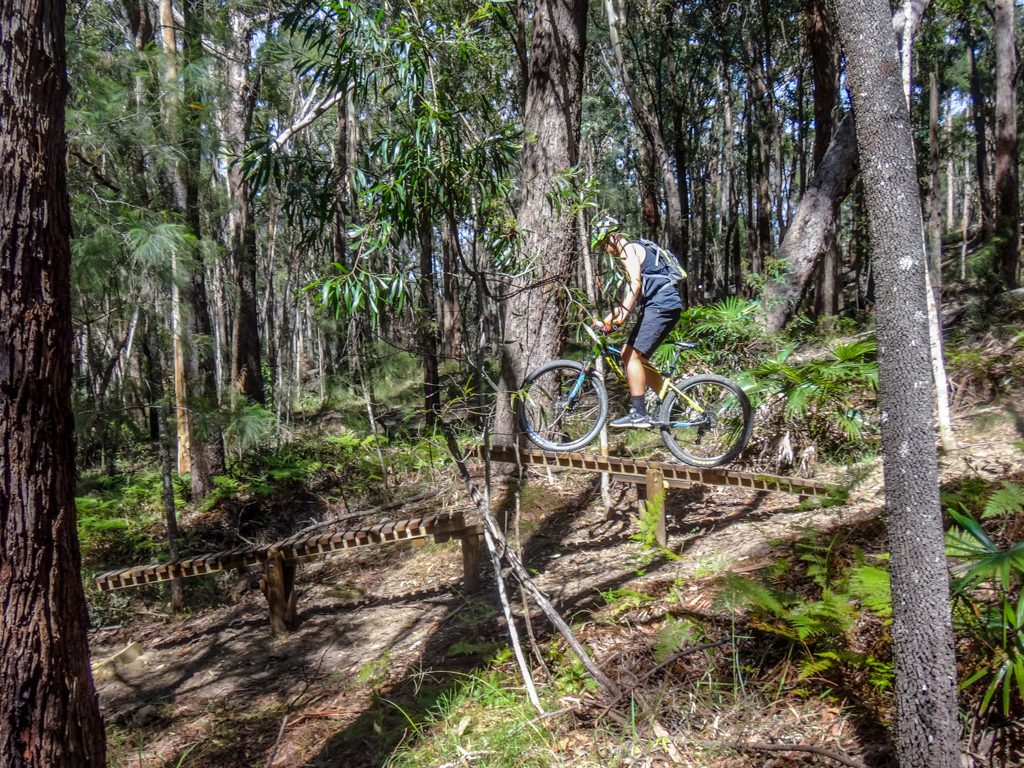 “Candy Store” was too tricky for me.

There were all sorts of death-defying “features”, including this double see-saw.

I decided to be a spectator rather than try it. 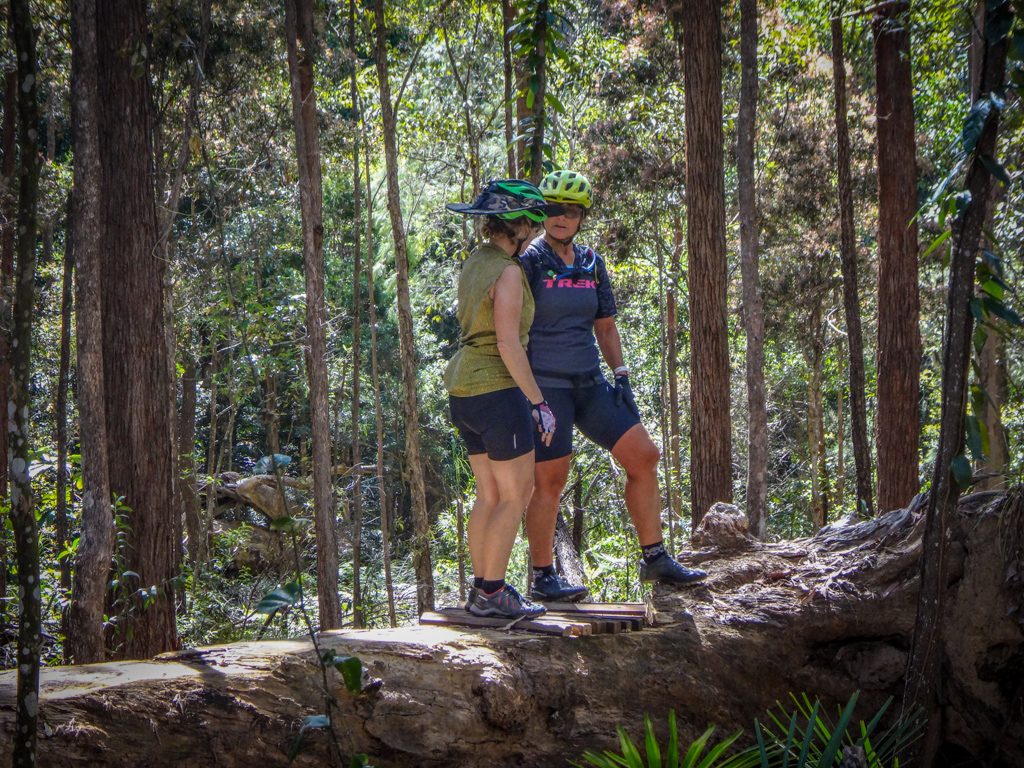 Kaye and Clare jumped up on a large log with the top shaved off.

I thought to myself, “what are we supposed to do on that?” 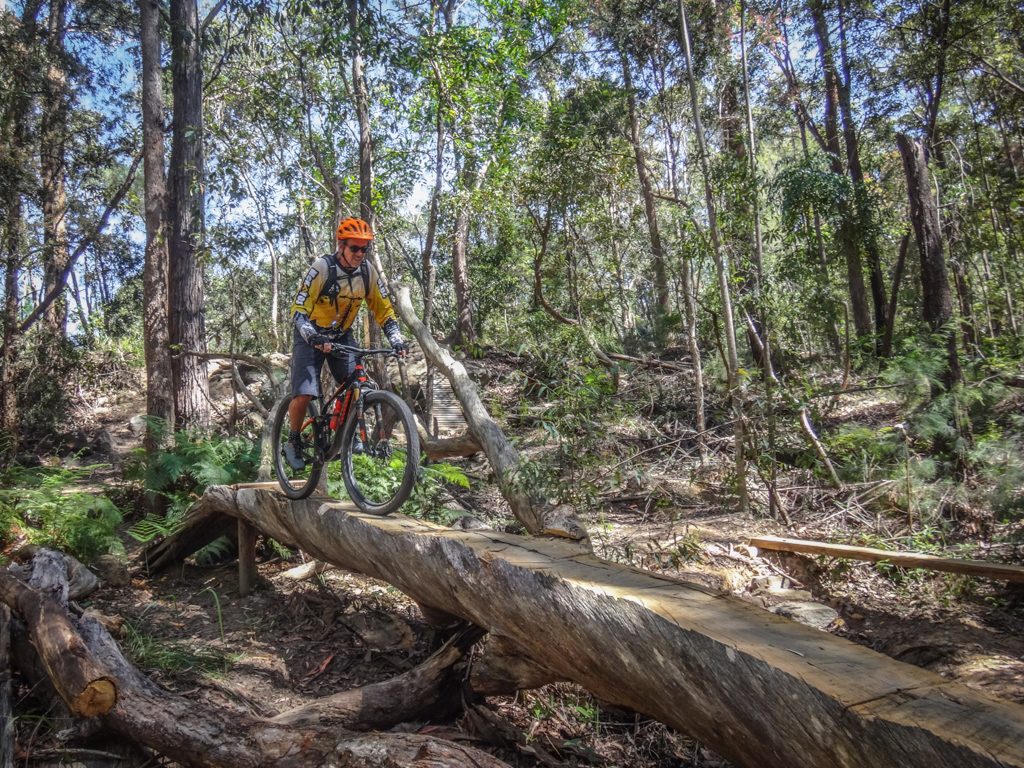 Mike answered my question.  Although his rear wheel almost slid off. 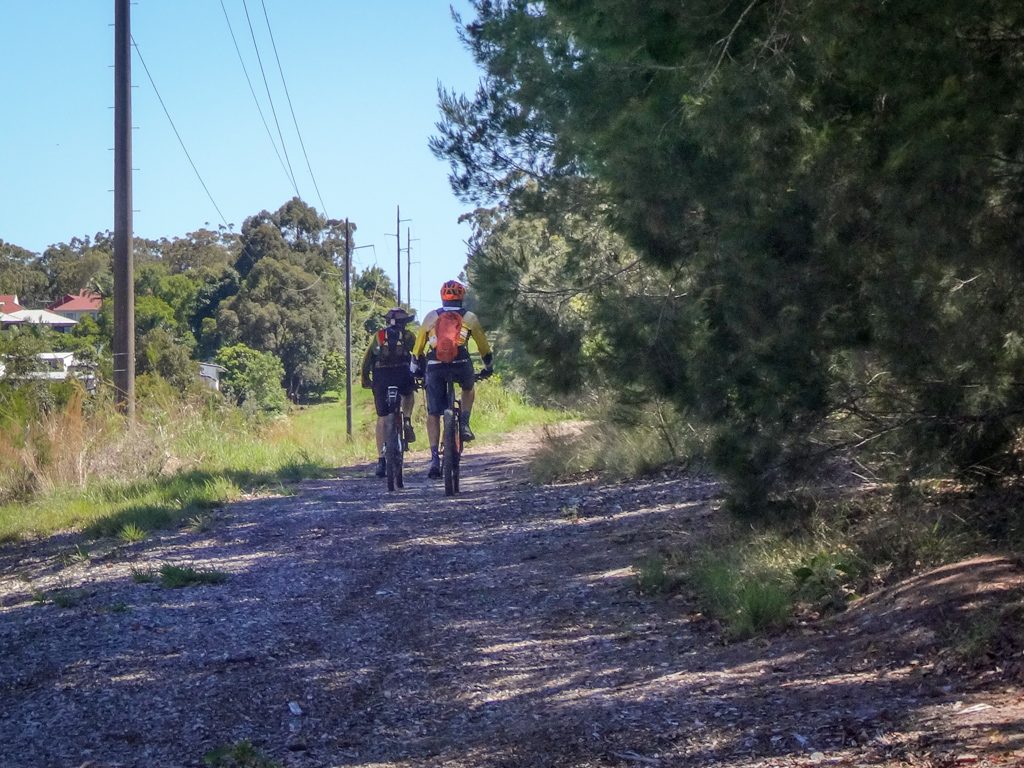 At the bottom of the hill, we left the park and started making our way west.  There were more trails over the other side of the freeway, about five kilometres away. 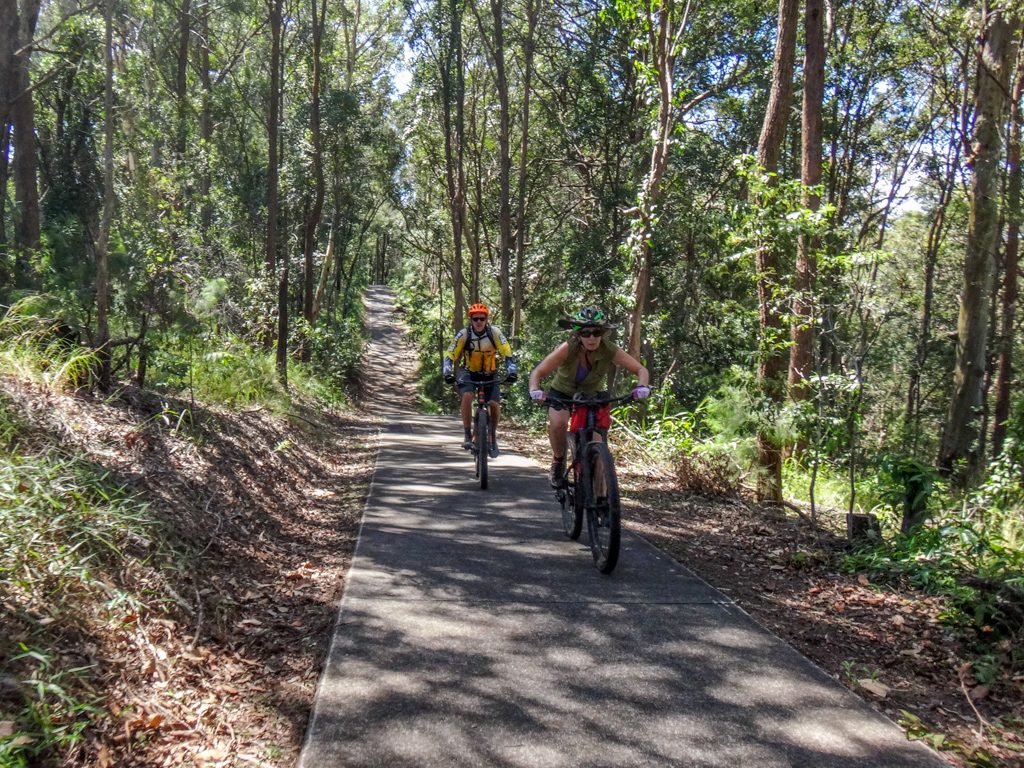 We followed bike paths and quiet back streets for most of the way. 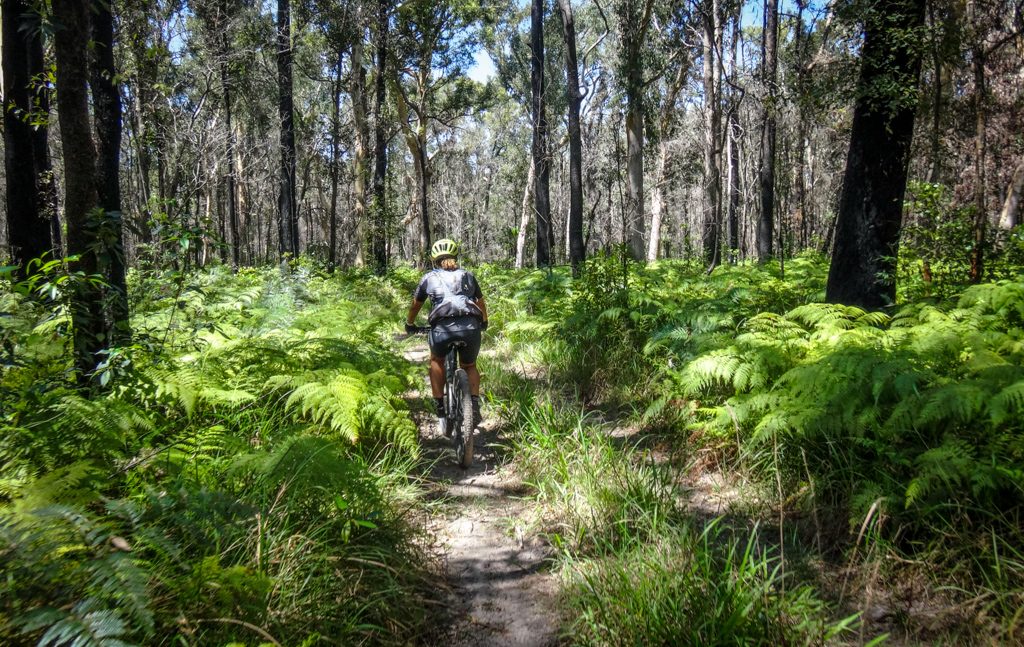 Twenty minutes later we disappeared once again into a lush grove of ferns. 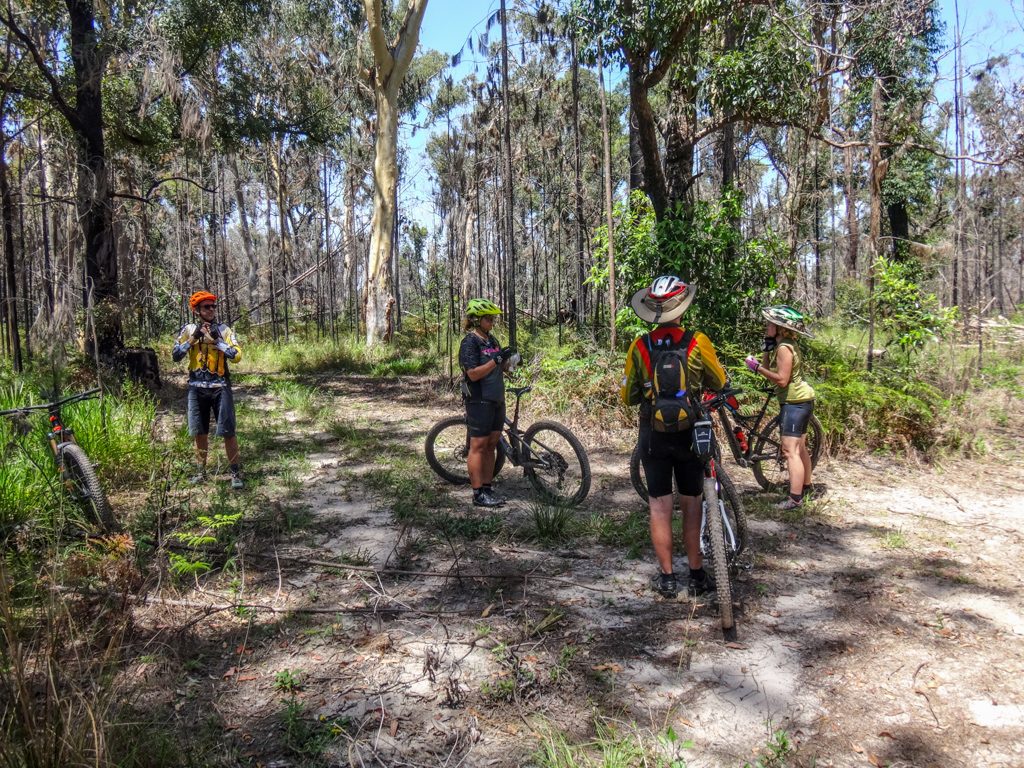 We weren’t completely sure where we were going.

But that’s what makes exploration on a mountain bike so enjoyable.

We just followed the marked trails, curious about where we’d end up. 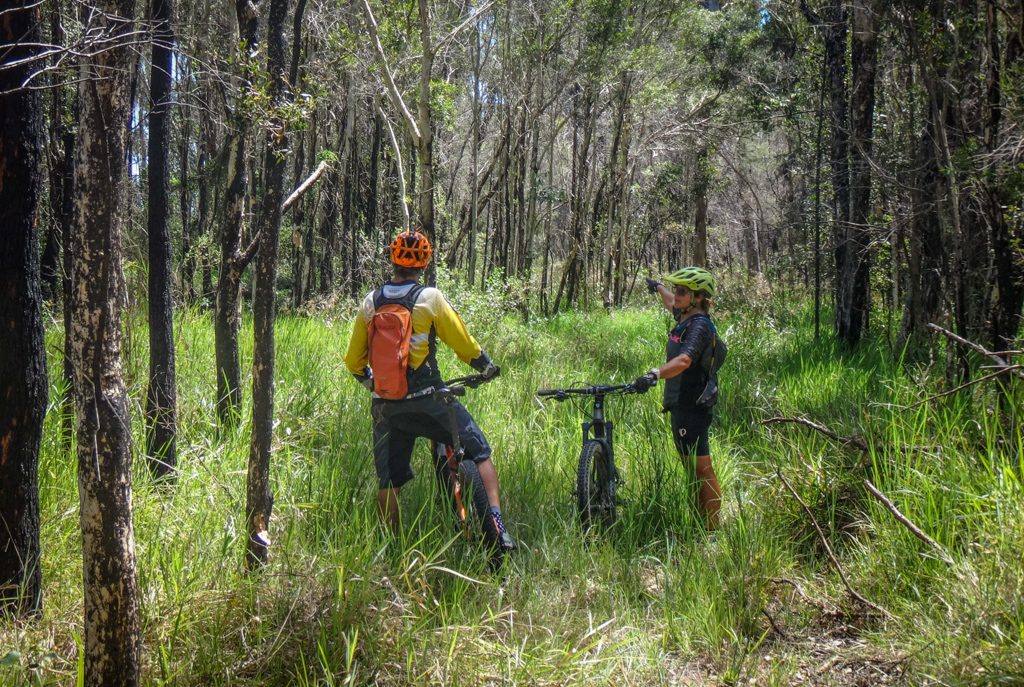 We had to back track a couple of times when the trial disappeared, but we didn’t mind. 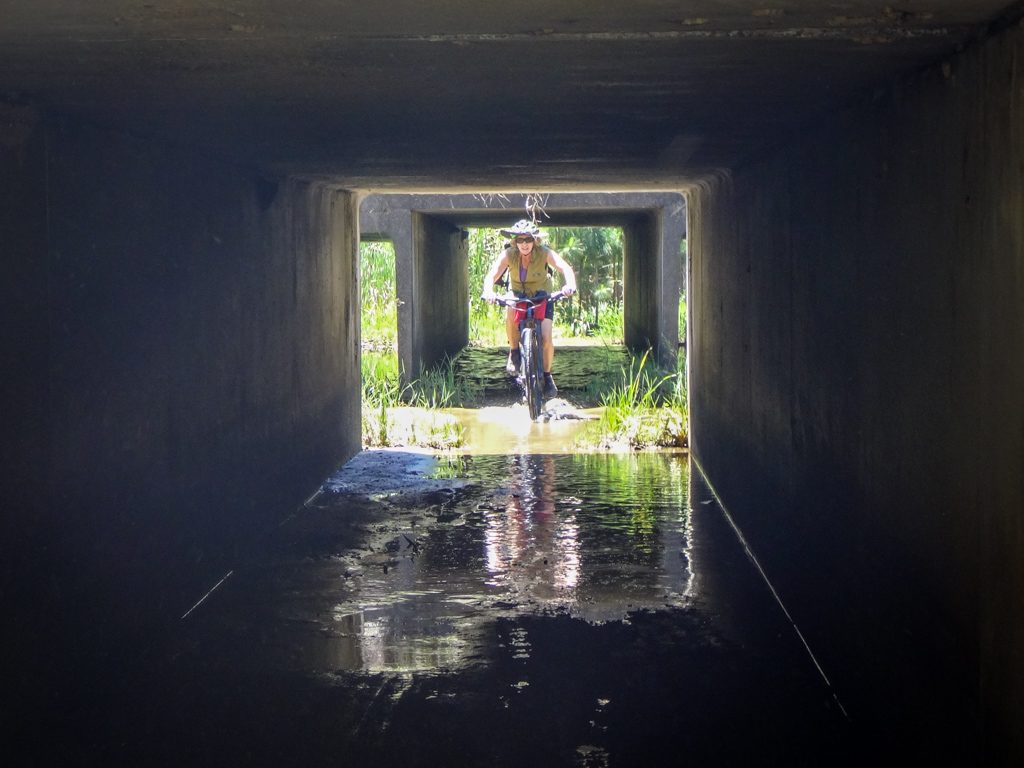 Eventually we found what we were looking for – a culvert under the freeway which led to more trails on the other side.

We rode a total of forty-four kilometres in about five and a half hours.

During that time we climbed about 700 metres in elevation and I burned about 2,000 kcal.

I’ll rate this one seven out of 10 on the tough-o-meter.

Thanks Clare, Mike, Kay and Russel for another fun day exploring new places on our bikes. 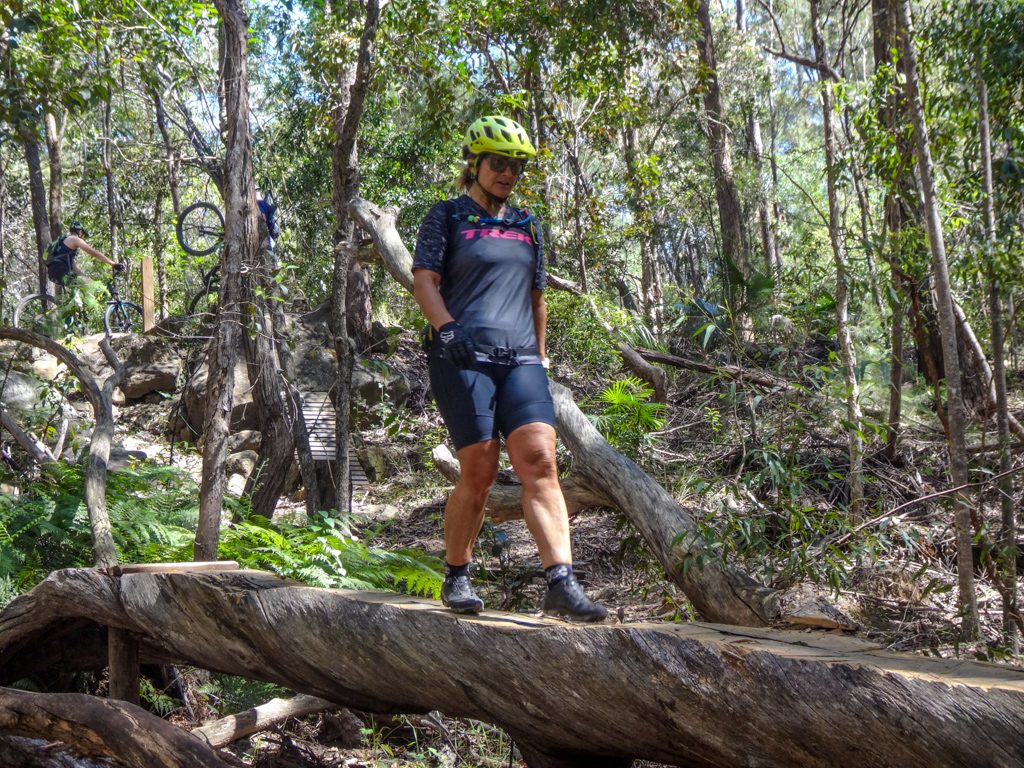 One Reply to “Sugar Bag Road”