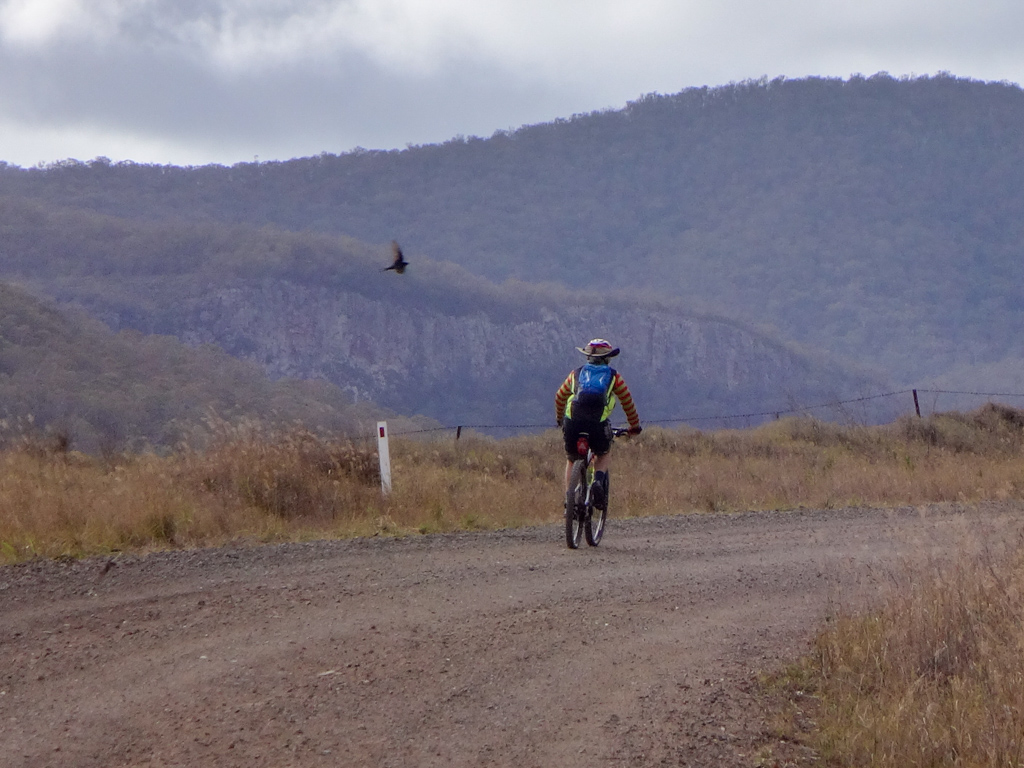 The mountains of South East Queensland hide numerous scenic secret valleys.  One of them is Swanfels.  Tucked away on the other side of the Great Divide, it’s hard to get to, but worth the trip. 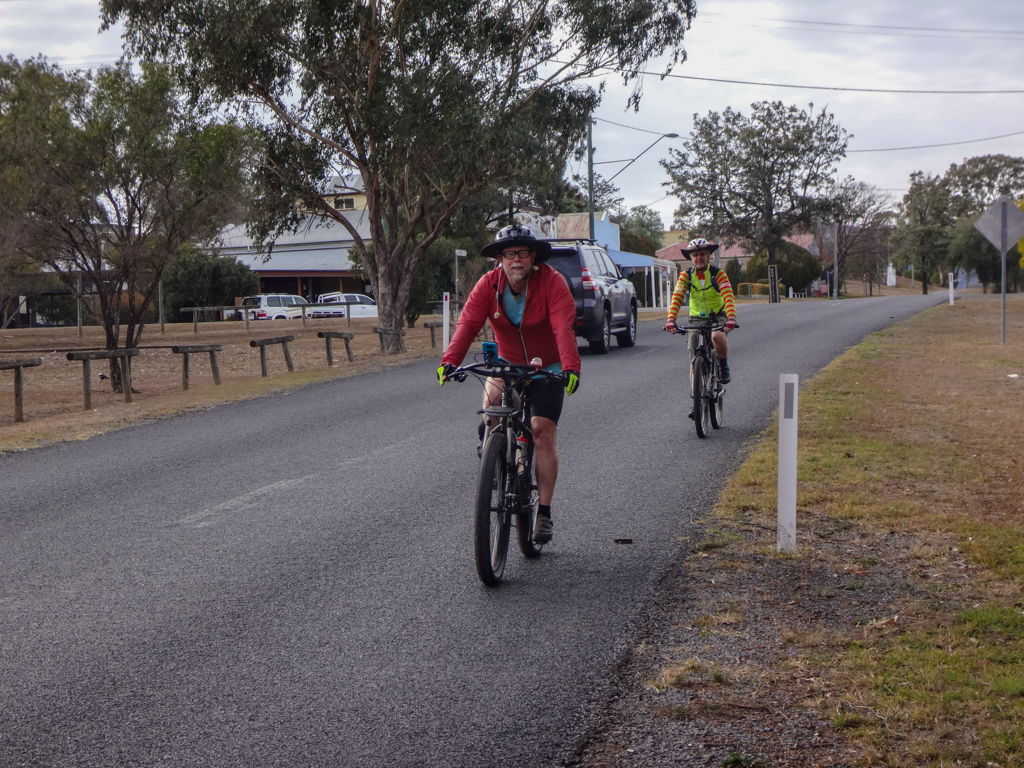 We parked the cars at the Southern Downs town of Yangan, which sits at the bottom of the Swanfels Valley.  Rather than heading up the valley immediately, we took a slight detour south to Emu Vale. 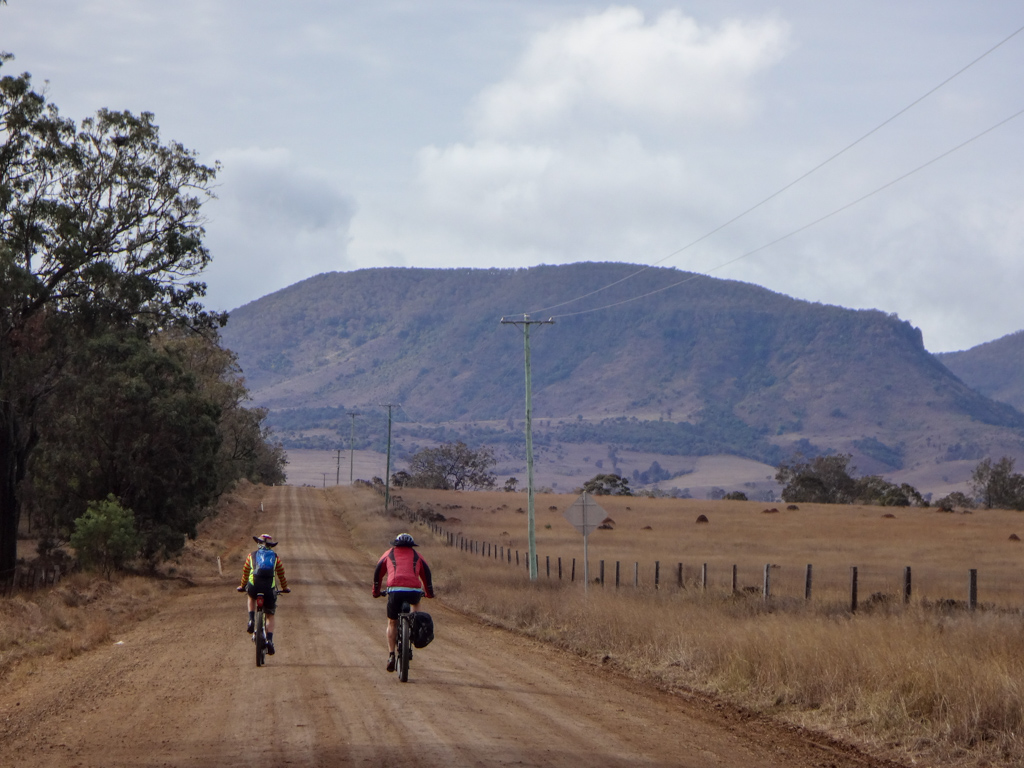 We’ve visited Emu Vale before, so I was keen to join up the lines in my Ride Network Map.

Somehow the map seems more pleasing to me if the lines all join up.   I’ve thought of seeking professional advice about this obsession, but if I did, the rides might not be as unusual.

This is stunning country.  Wide grassy plains lead up to the feet of jagged hills.  We were glad to be here. 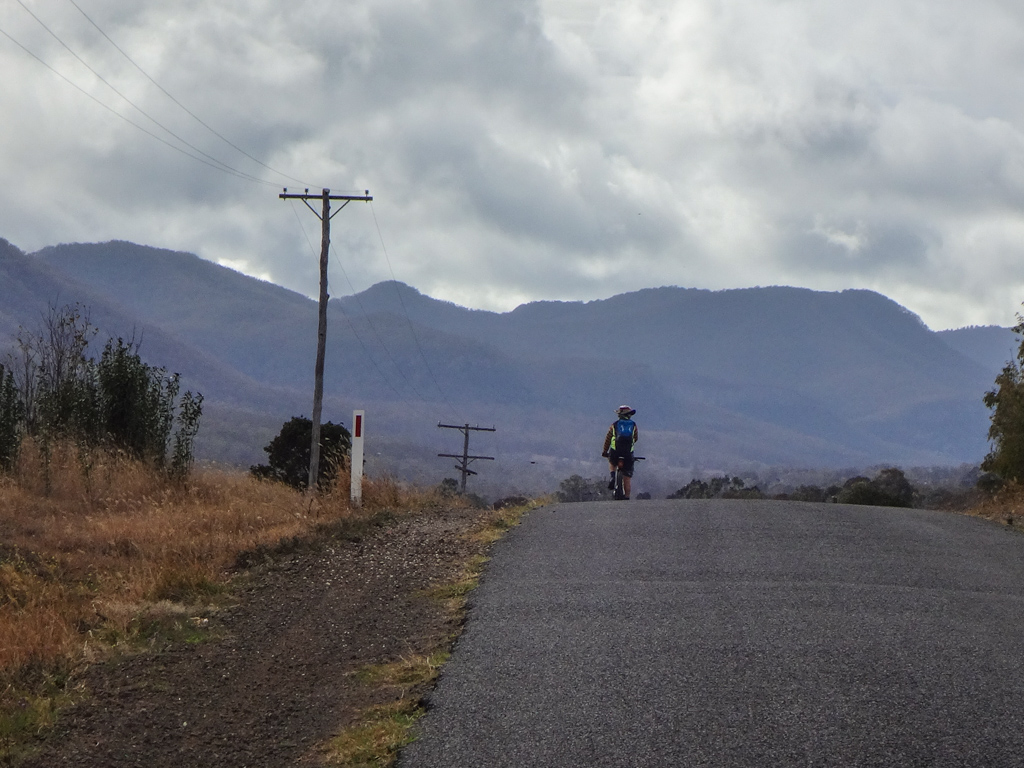 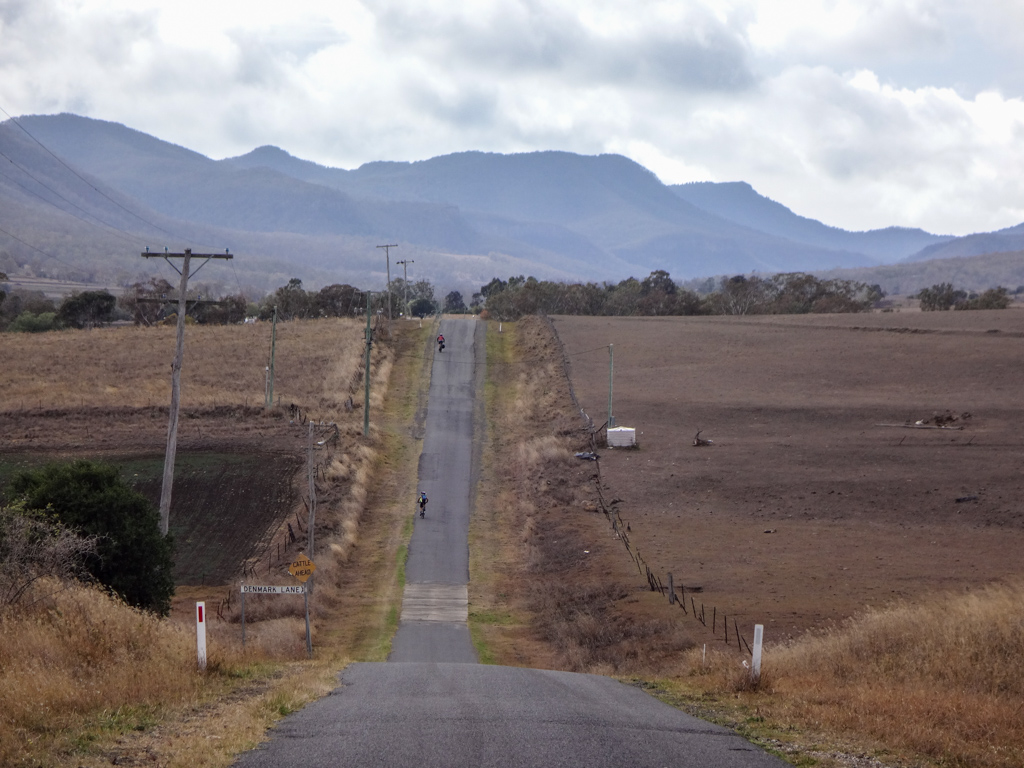 As we rode east towards the Great Dividing Range, the landscape started to undulate like wrinkles on a huge blanket. 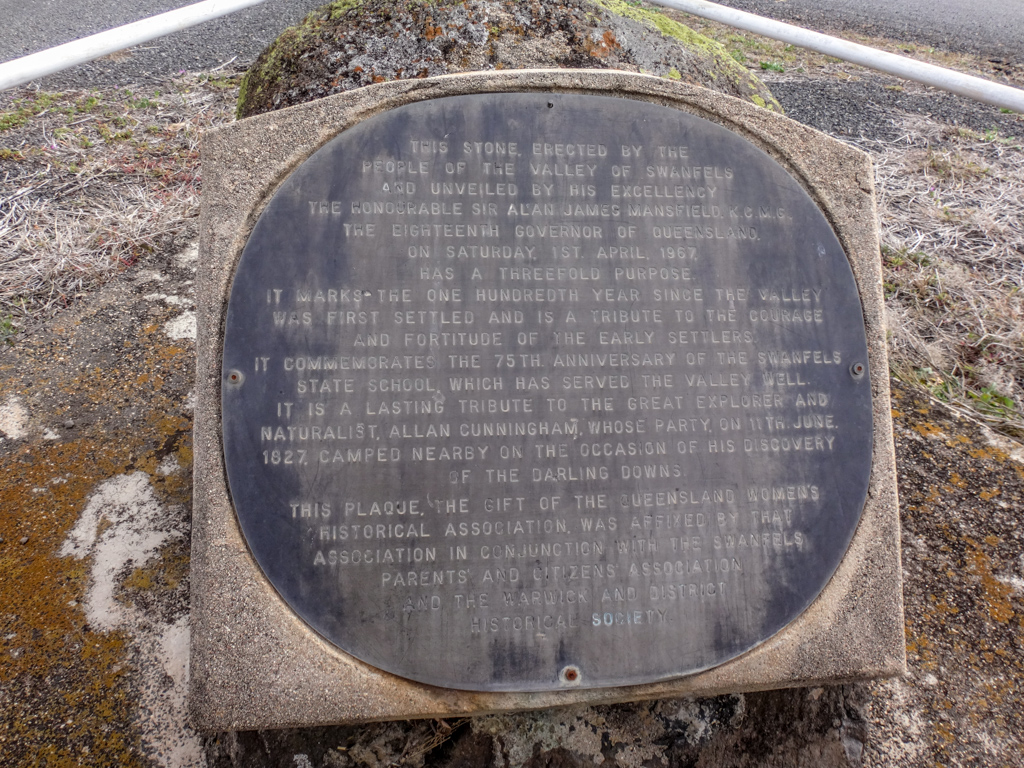 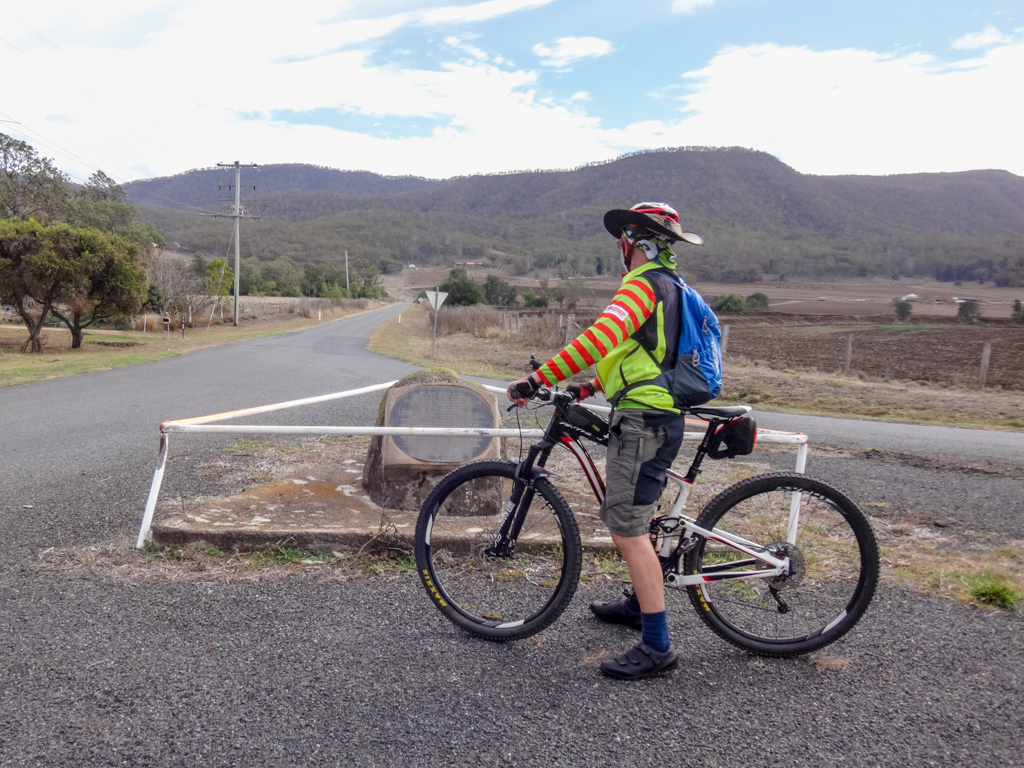 Alan Cunningham passed this way in 1827, trying to find a way over the Great Divide.

He eventually found two “gaps” through the mountains – one of which had been used regularly by indigenous people for thousands of years.  I’ve often wondered why he didn’t just ask one of the locals for the best route rather than spending such a long time trying to figure it out for himself.

The bitumen ended, and we followed the gravel road east. 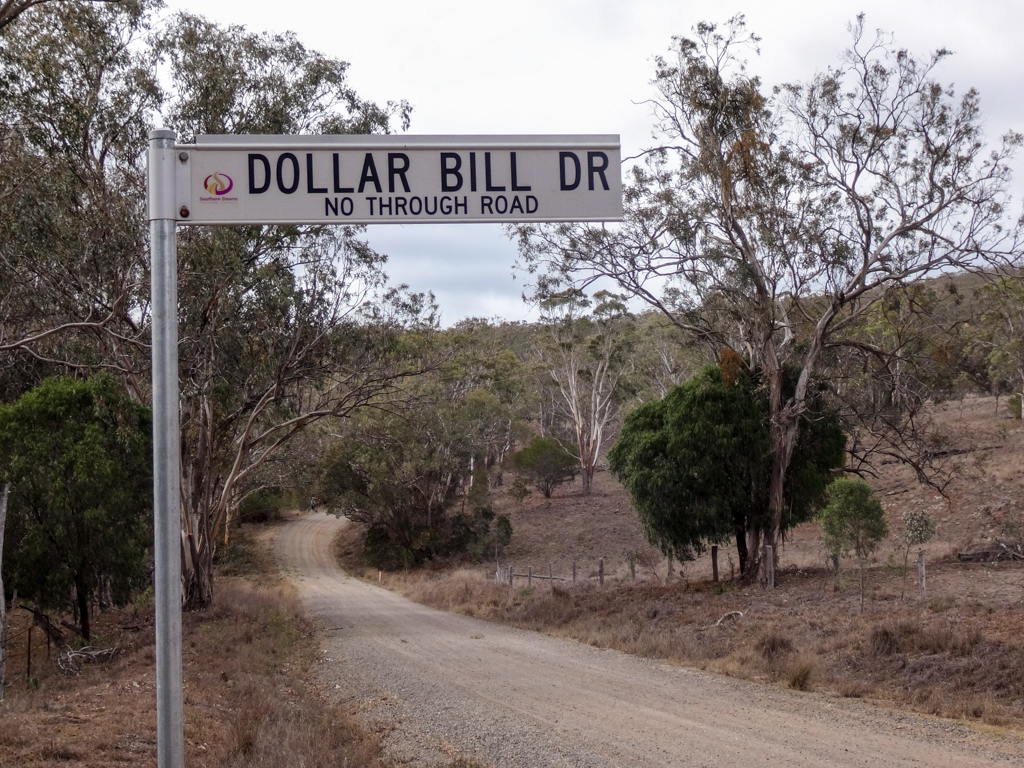 Ah…. you Swanfellians have strange names.

A strong headwind buffeted us – slowing us down, even when we rode downhill… 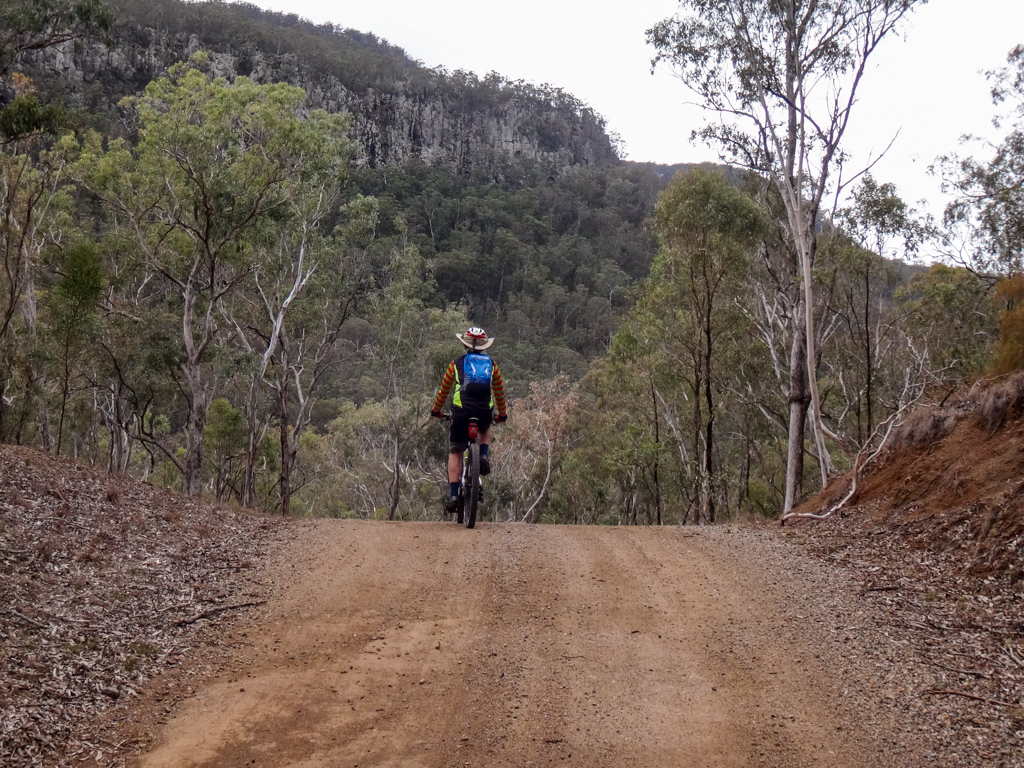 But the mountains looked amazing.  Tall cliffs loomed up on either side as the valley narrowed.

After we passed the last farmhouse in the valley, the gravel road devolved into a dirt track. 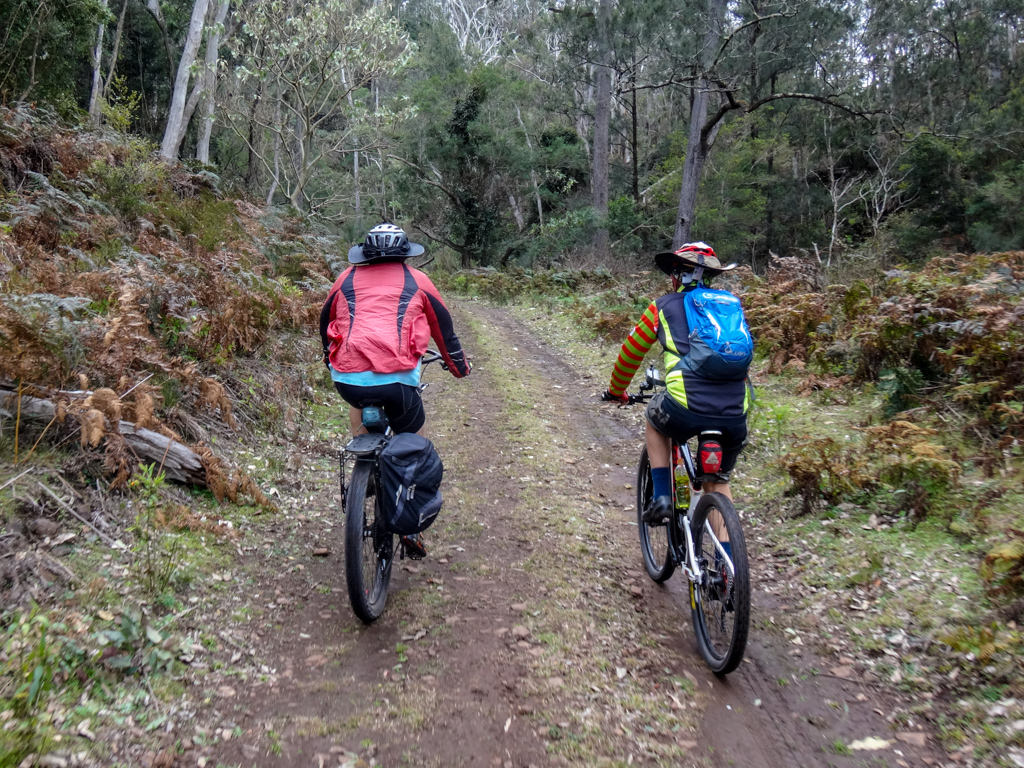 The farm paddocks disappeared.  The trees grew thicker on either side of the track. 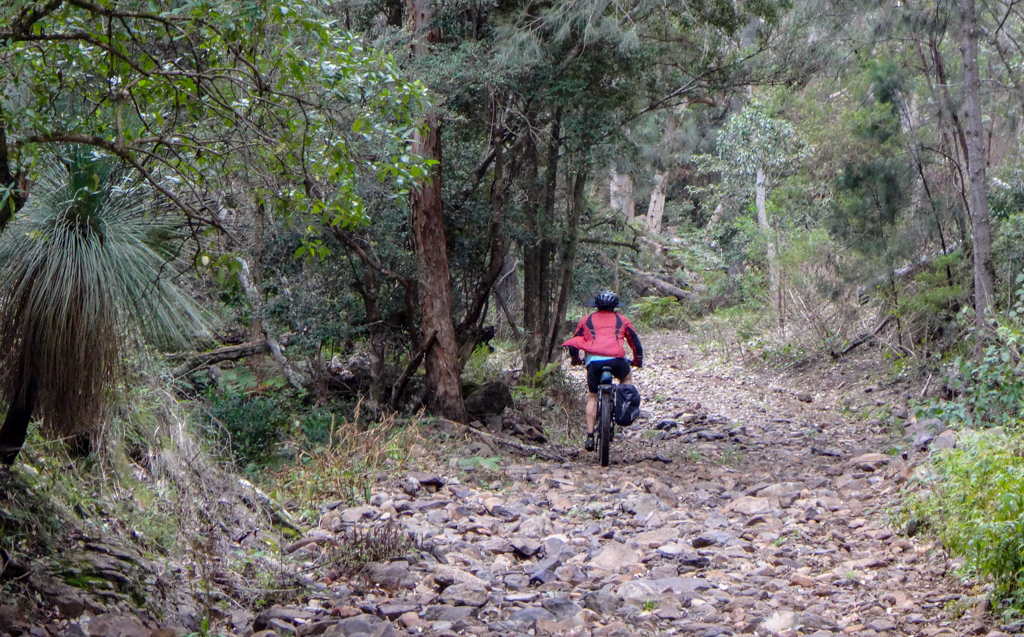 Then the path turned into a dry creek bed.

I pedaled over the rocks for a while then decided to walk – not because it was too difficult, but because I didn’t want to risk damaging my wheels. 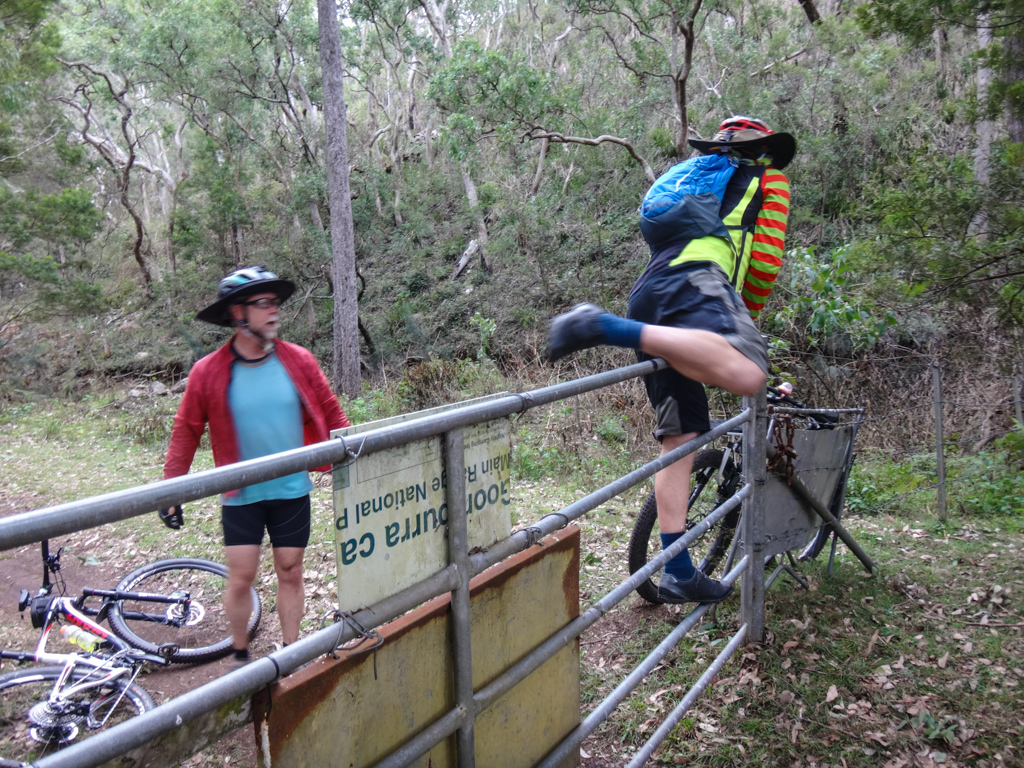 After we crossed a national park gate, the track grew rougher and headed steeply up the hill. 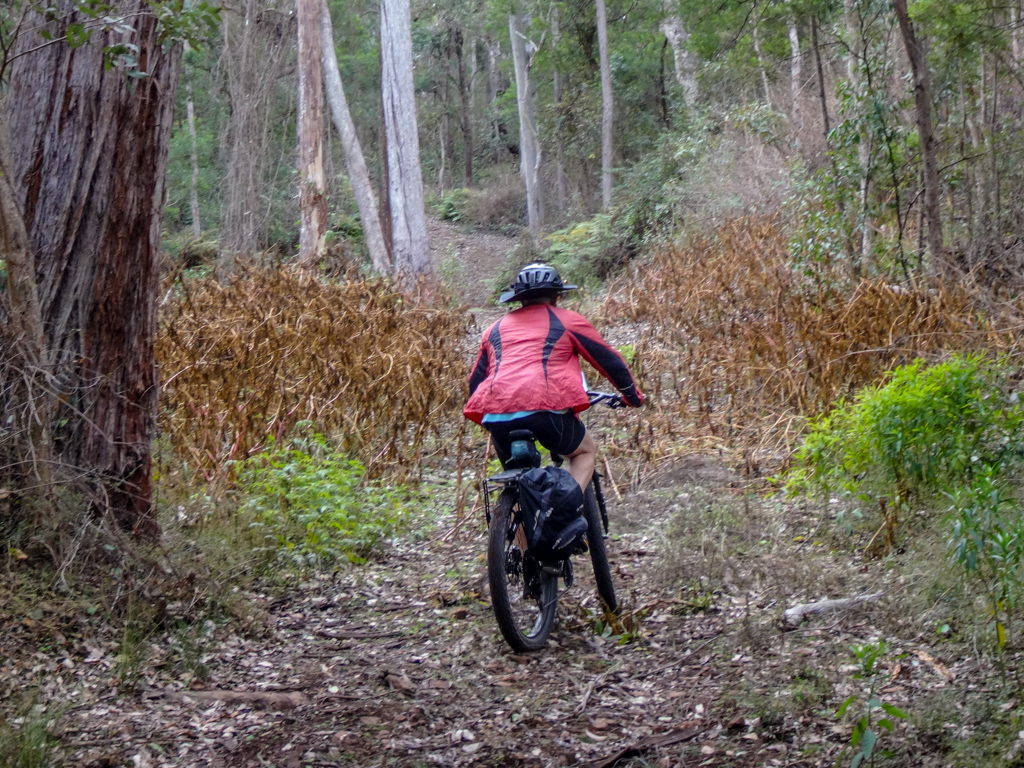 Russel and I decided to delegate, and sent Jason ahead to check it out.

We found an old chair and bucket, and had a rest while Jason did some vicarious exploring on our behalf.

Ten minutes later Jason returned and reported that there wasn’t much to see up the hill – it was just a rough track that kept going upwards.

We decided this was a good “half way point” to turn around and head back towards town. 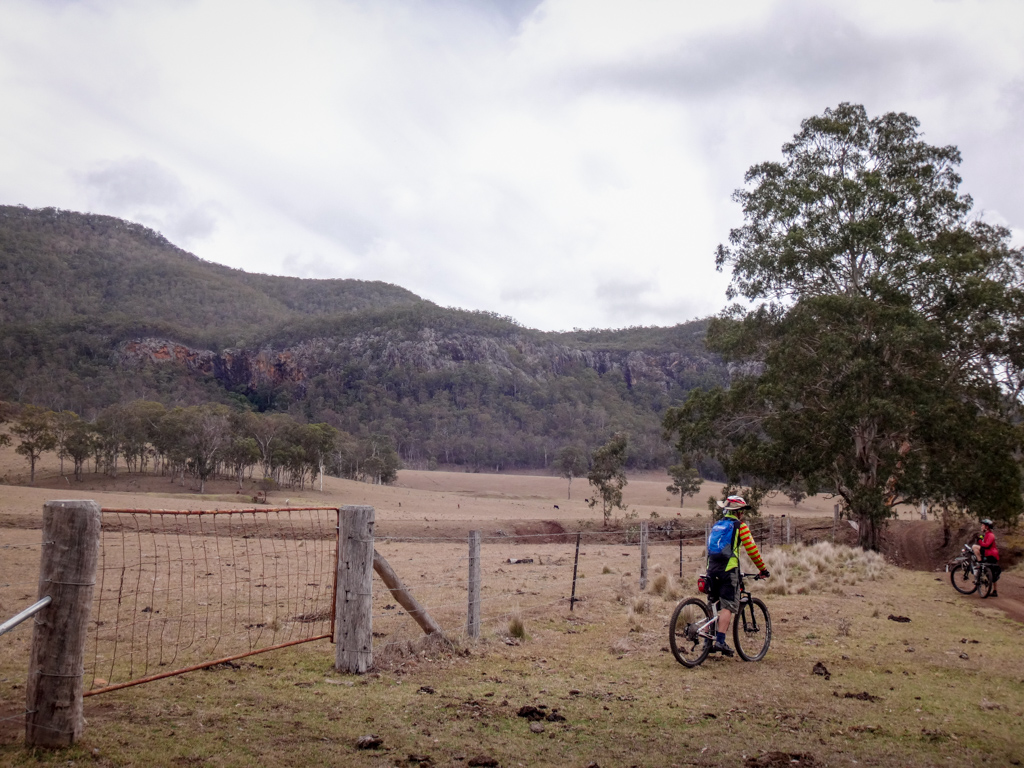 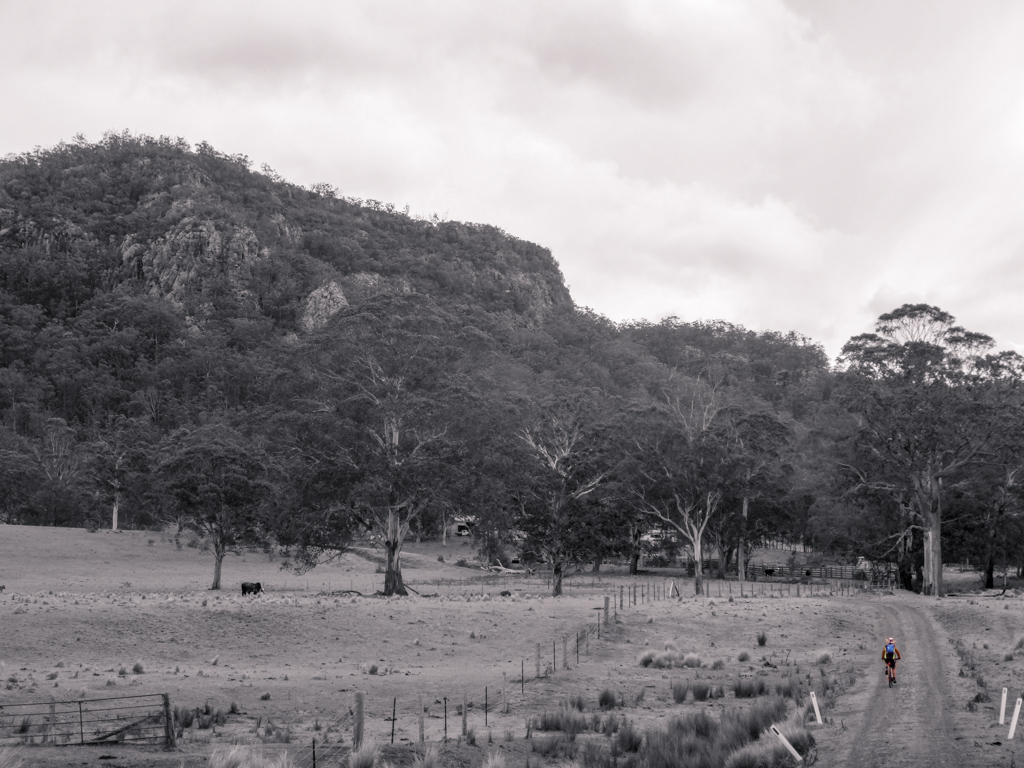 With the wind behind us and the gentle downhill gradient, the trip back was much quicker. 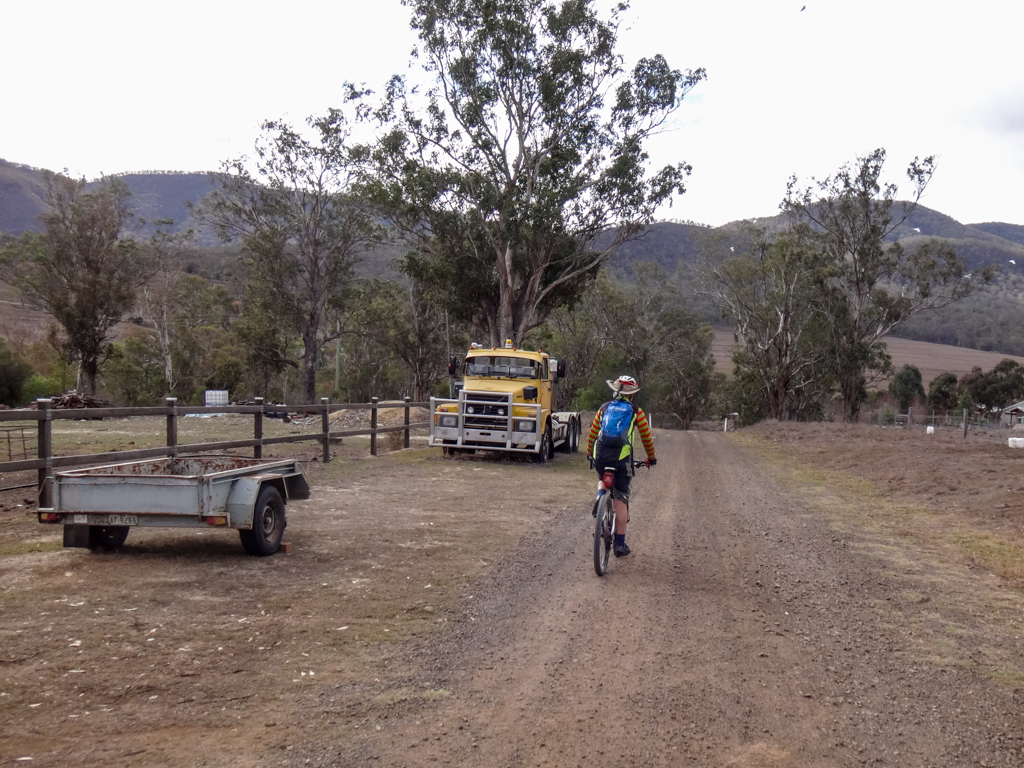 Rather than merely retrace our steps along Top Swanfels Road, we found a parallel road to the north, on the other side of the valley, and followed it instead. 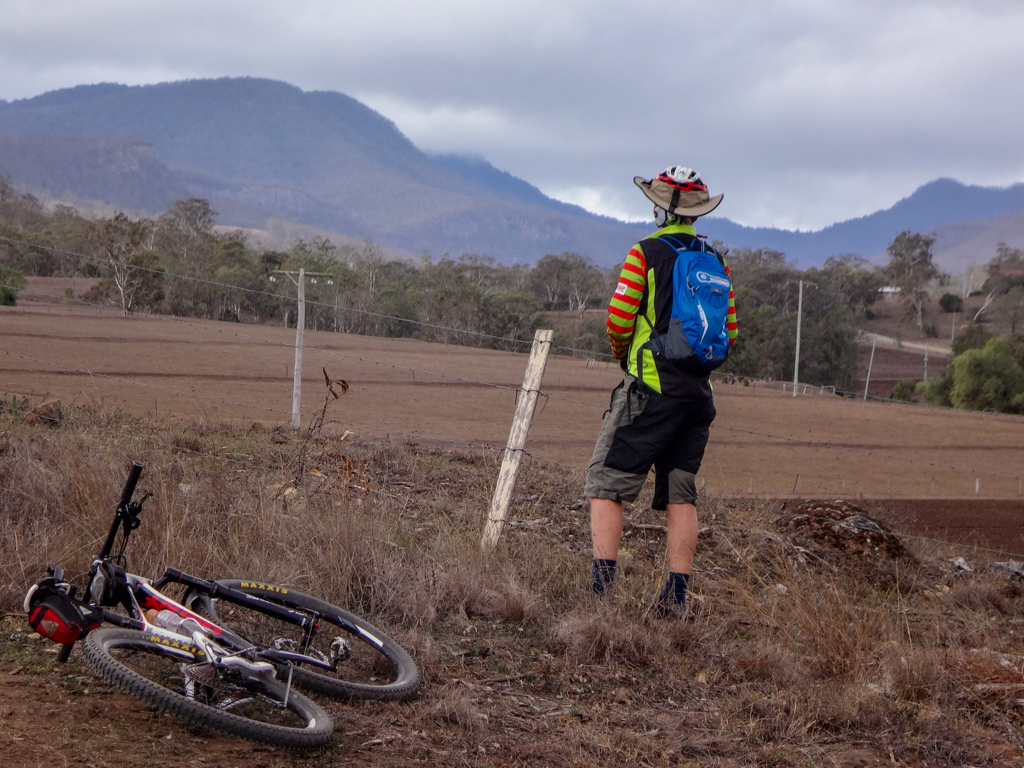 Russel suggested we come back again in a month or two and explore more tracks at the end of the valley.

I agree with him. 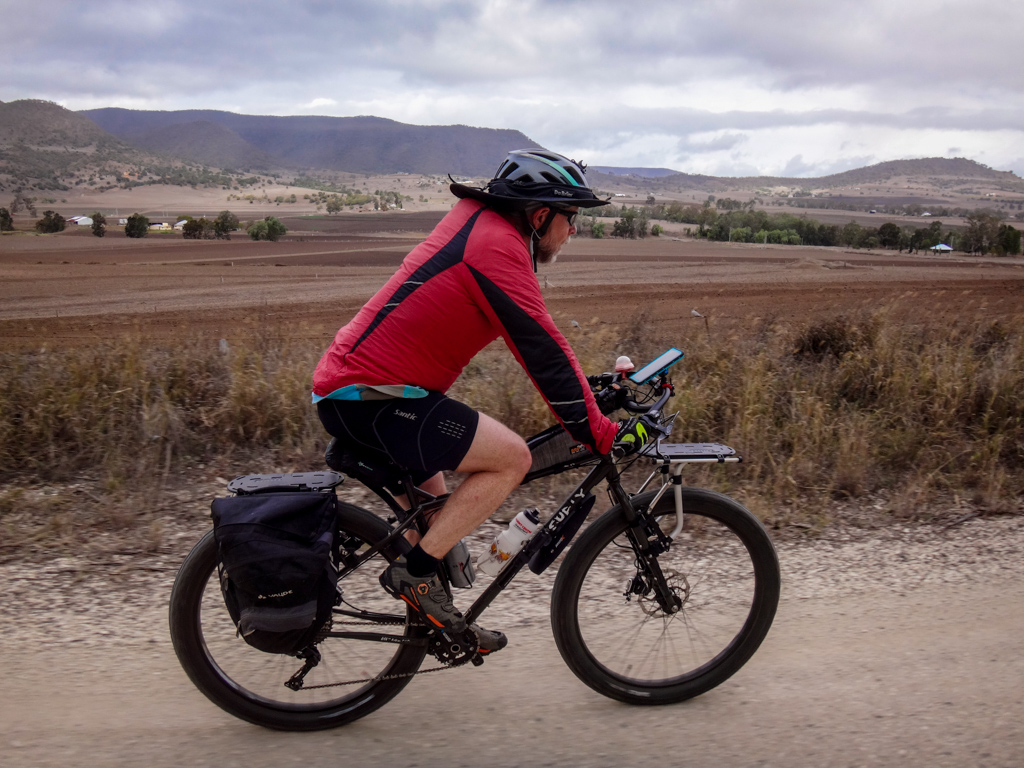 A few spots of rain fell with the stiff breeze at our backs, but not enough to bother us. 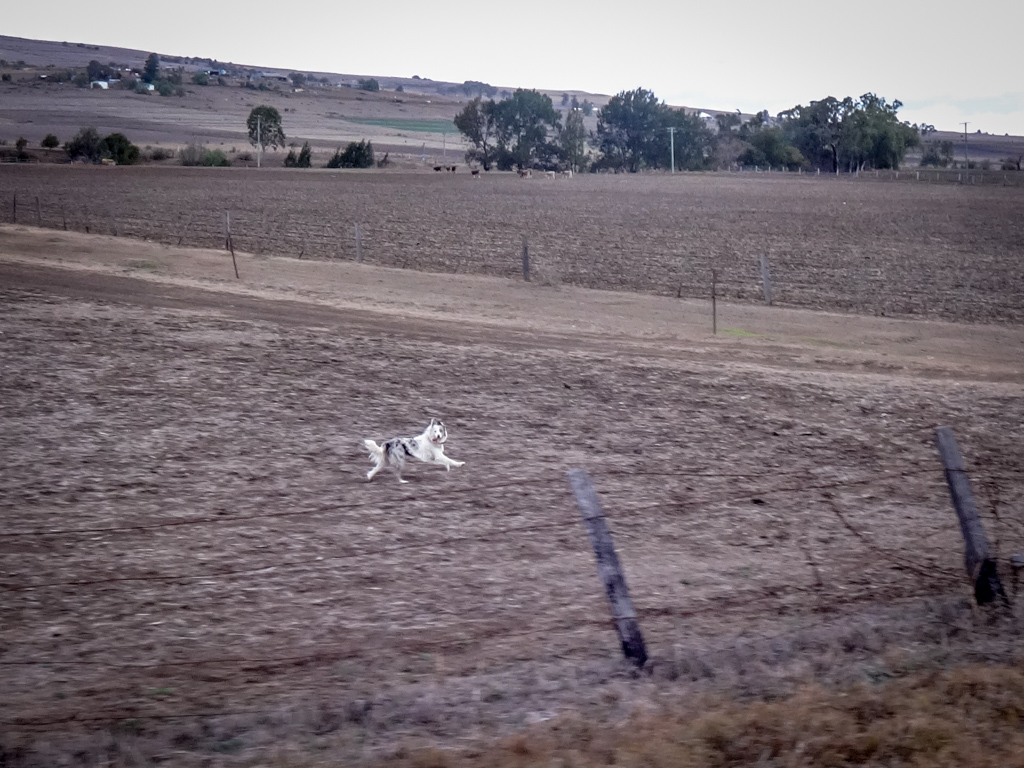 An eager pup galloped alongside us through a dry paddock.

“Where are you going?” 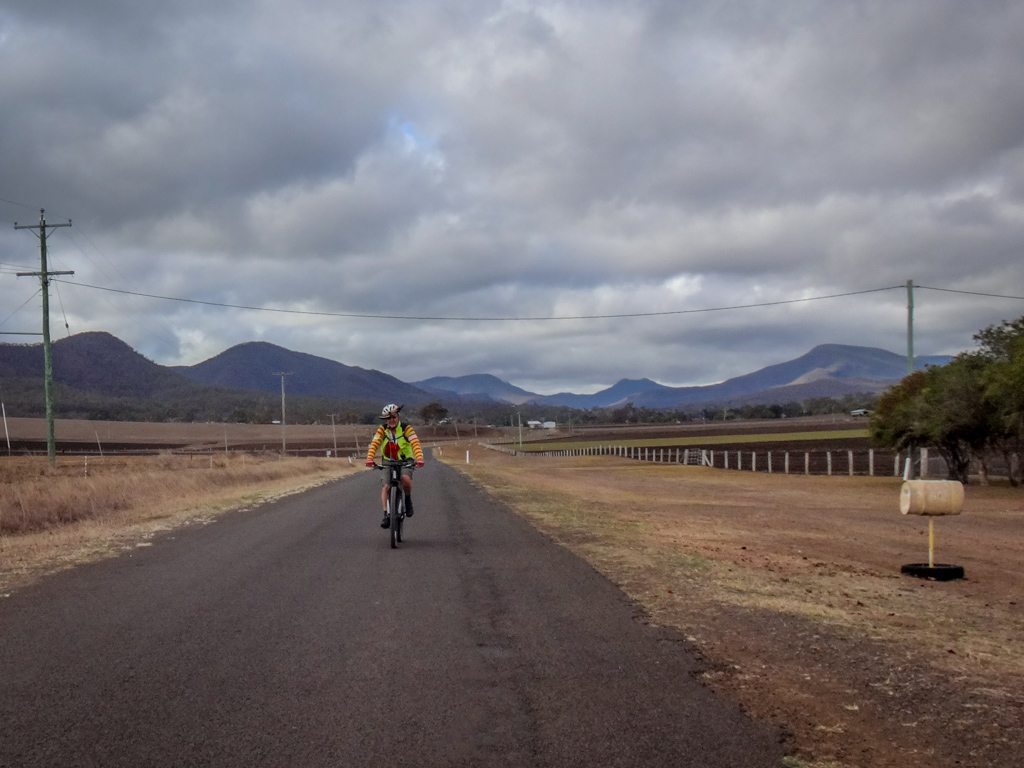 We’ll definitely come back to Swanfels.  There is much more to see here.

We rode about sixty-five kilometres in about five hours.

During that time we climbed about 650 metres in elevation and I burned about 3,000 kcal.

This was an easy ride in pleasant conditions.  I’ll rate this ride 7 out of 10 on the tough-o-meter.

Thanks Russel and Jason for another fun day out. 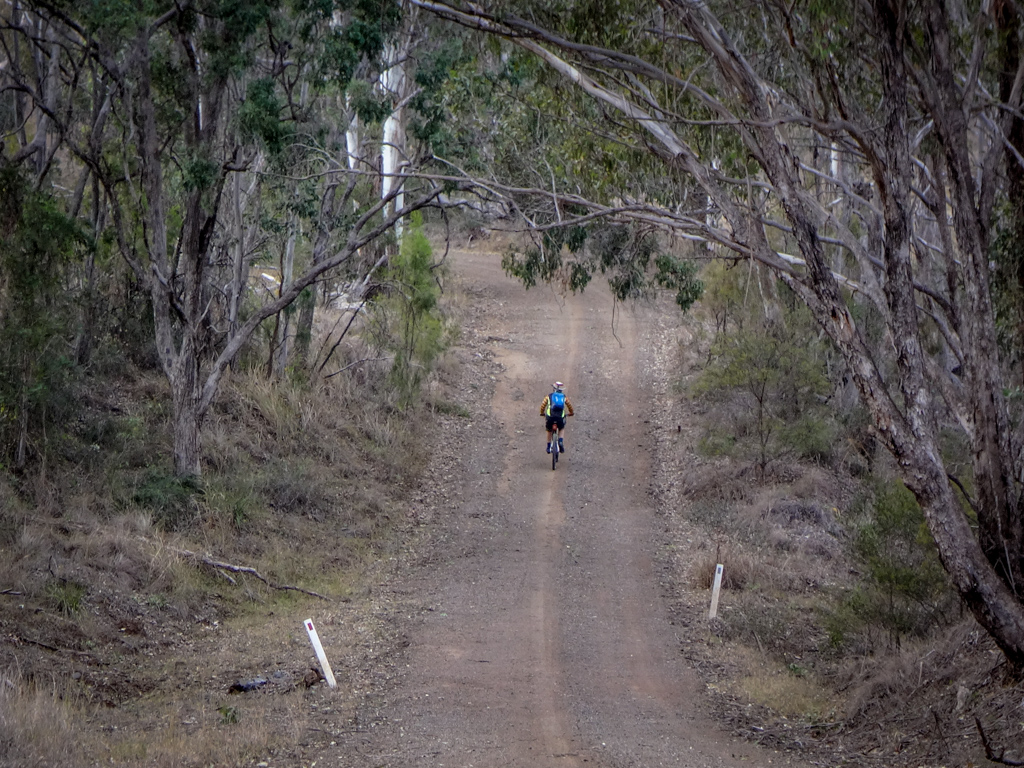