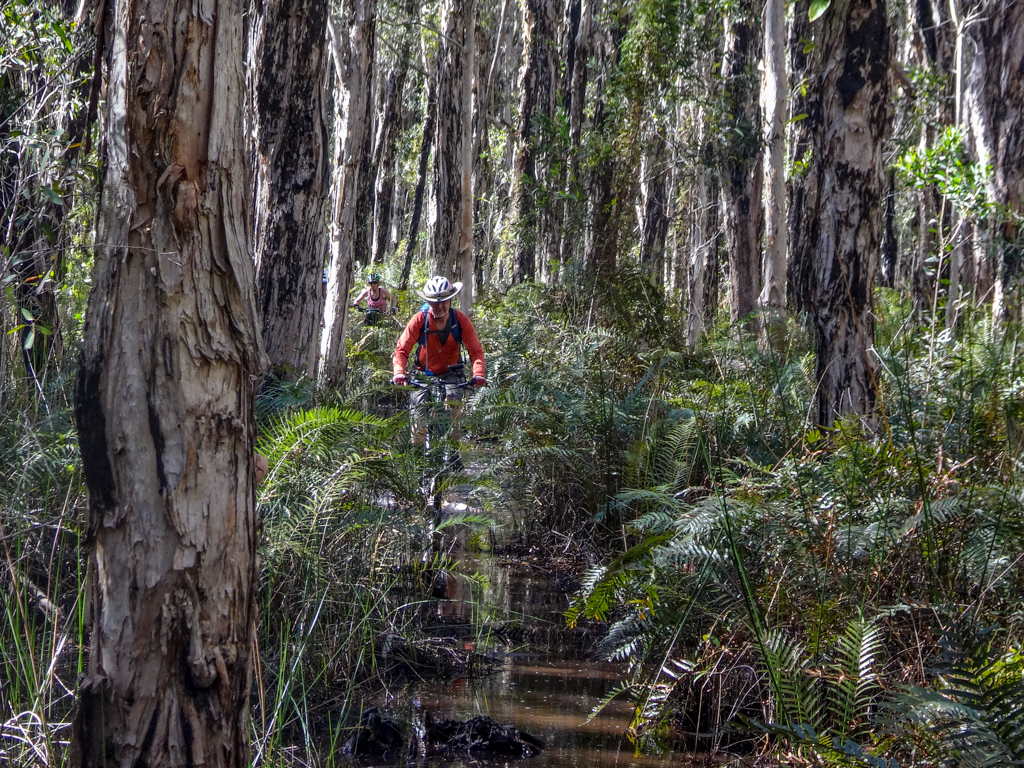 Great Sandy National Park has some wonderfully diverse landscapes.  Today we explored some of that diversity on our bikes. 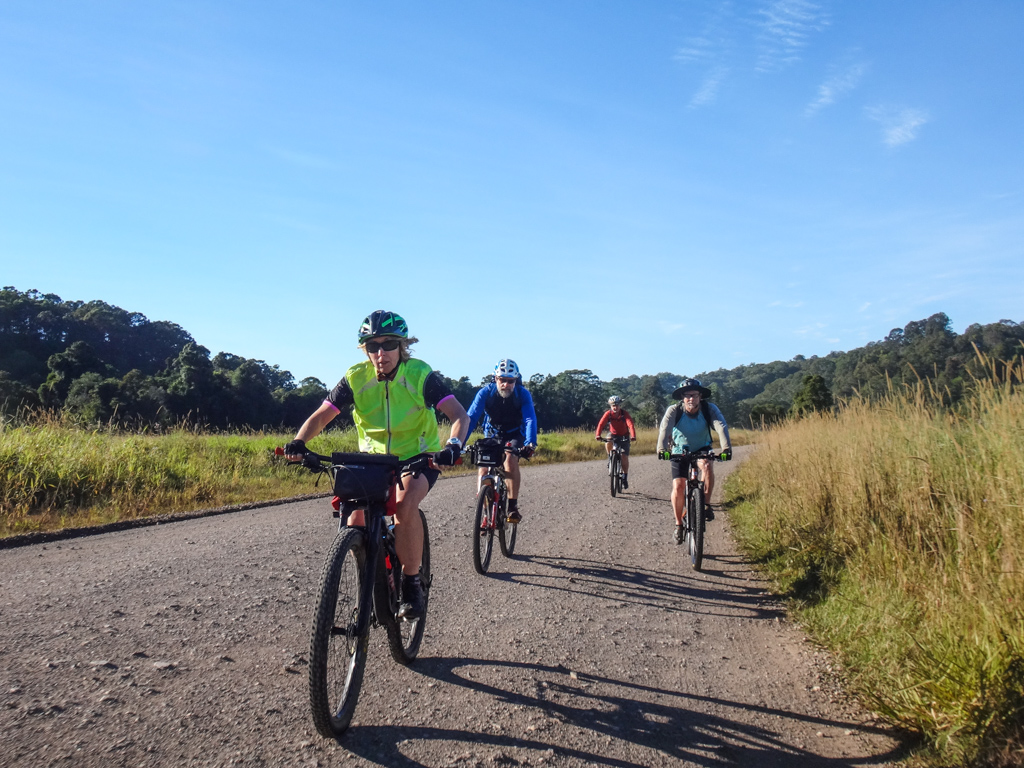 We started at Kin Kin, on the northern edge of the Noosa Trail Network, and pointed our bikes North.

We soon left the paved road and rolled onto the gravel. 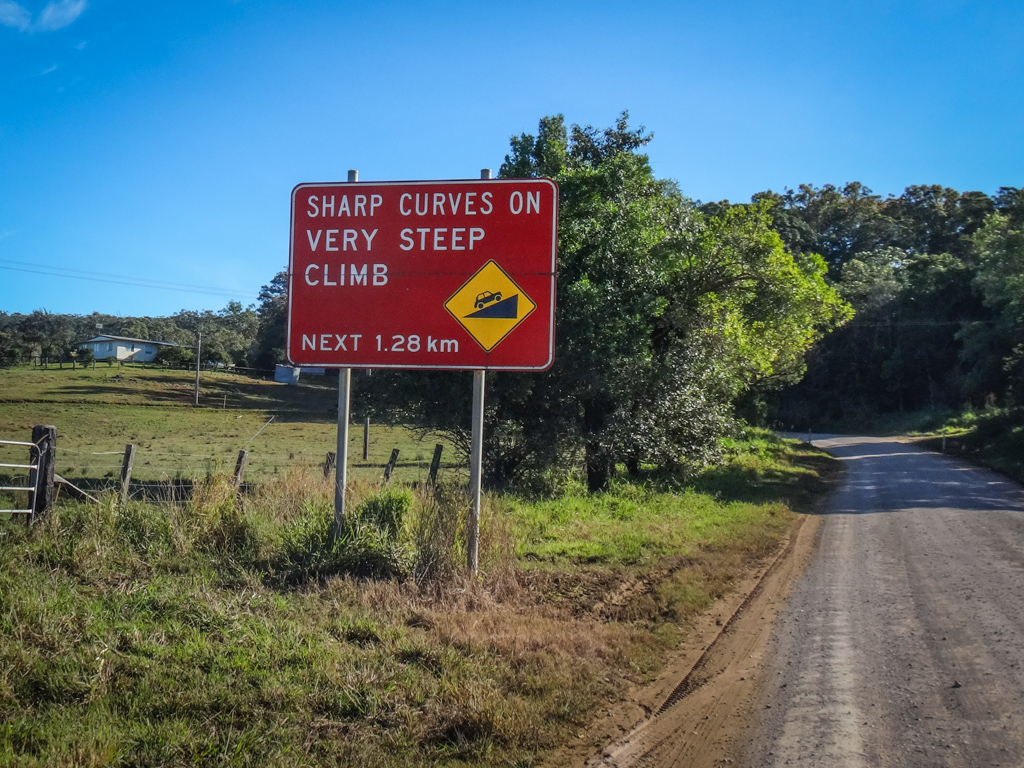 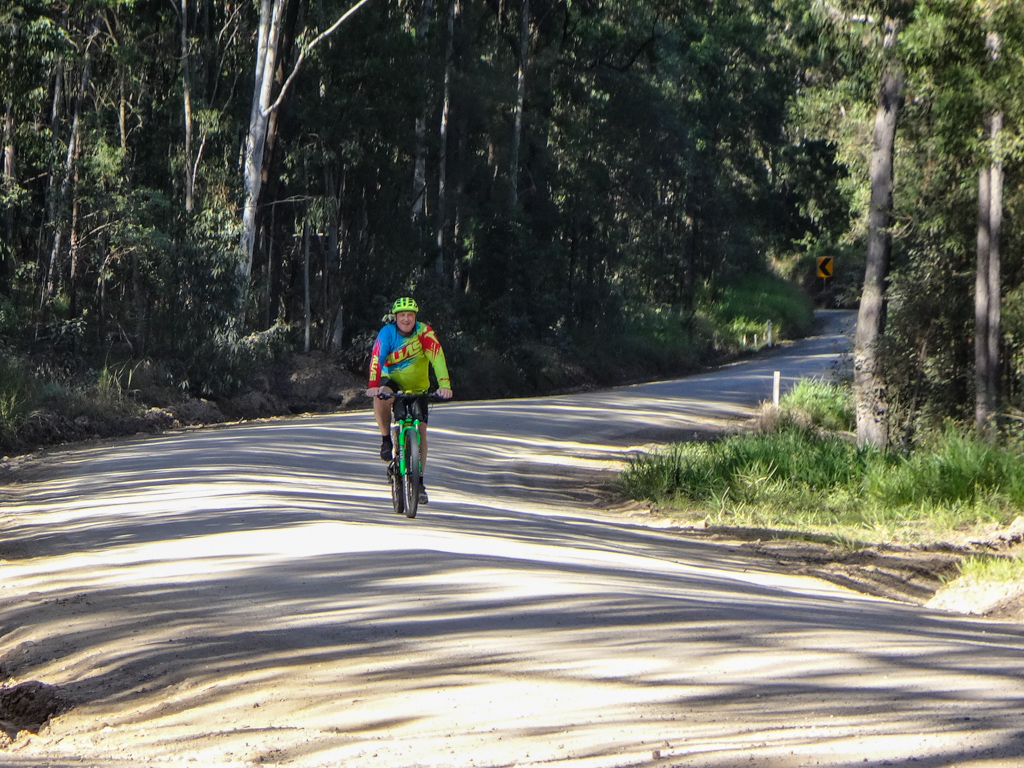 We started the day with a short sharp climb up the Wolvi Range.

It’s much nicer pedaling up hills at the start of the ride when your legs are fresh, rather than towards the end.

Many 4×4’s / 4WD’s drive along this dirt road on their way to Harry’s Hut.  Rather than follow them, we disappeared into the forest. 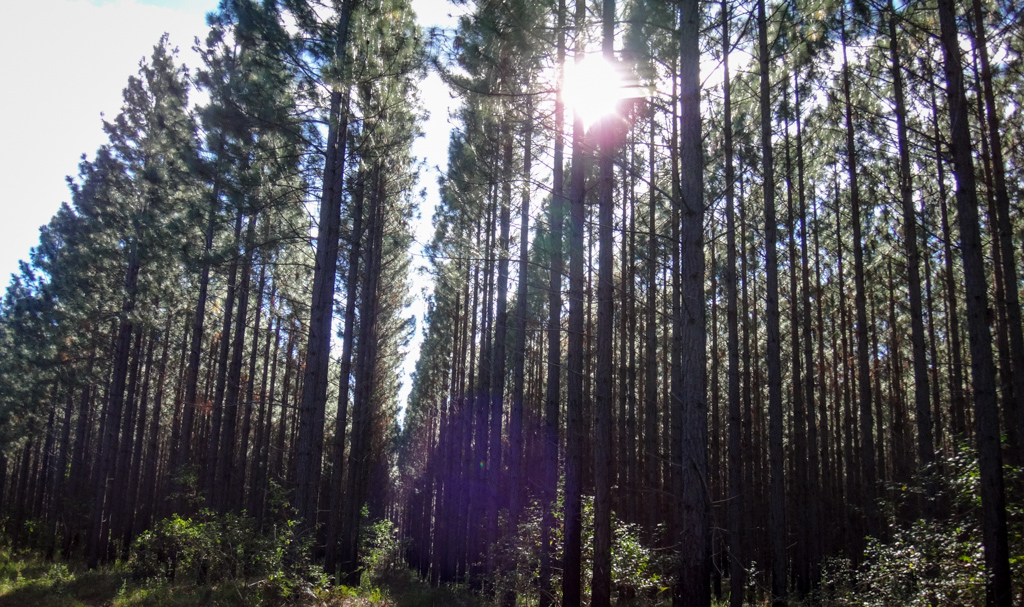 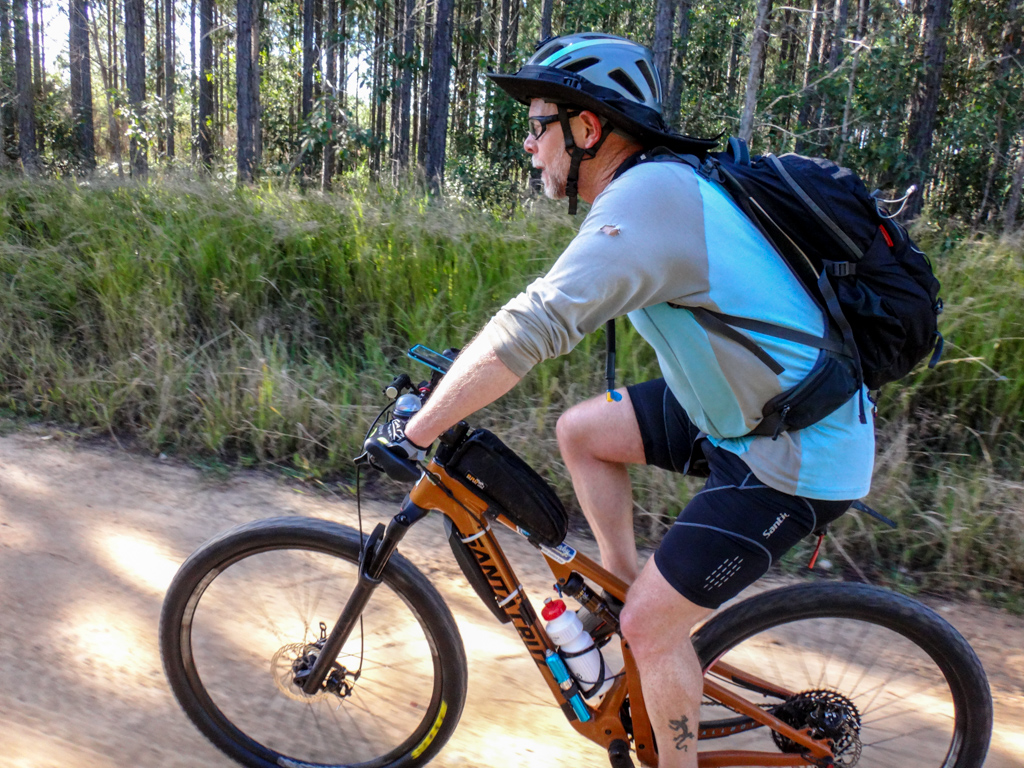 The Toolara State Forest stretches endlessly north from here.  If you’re keen you can keep going all the way to Maryborough and not see another person all day. 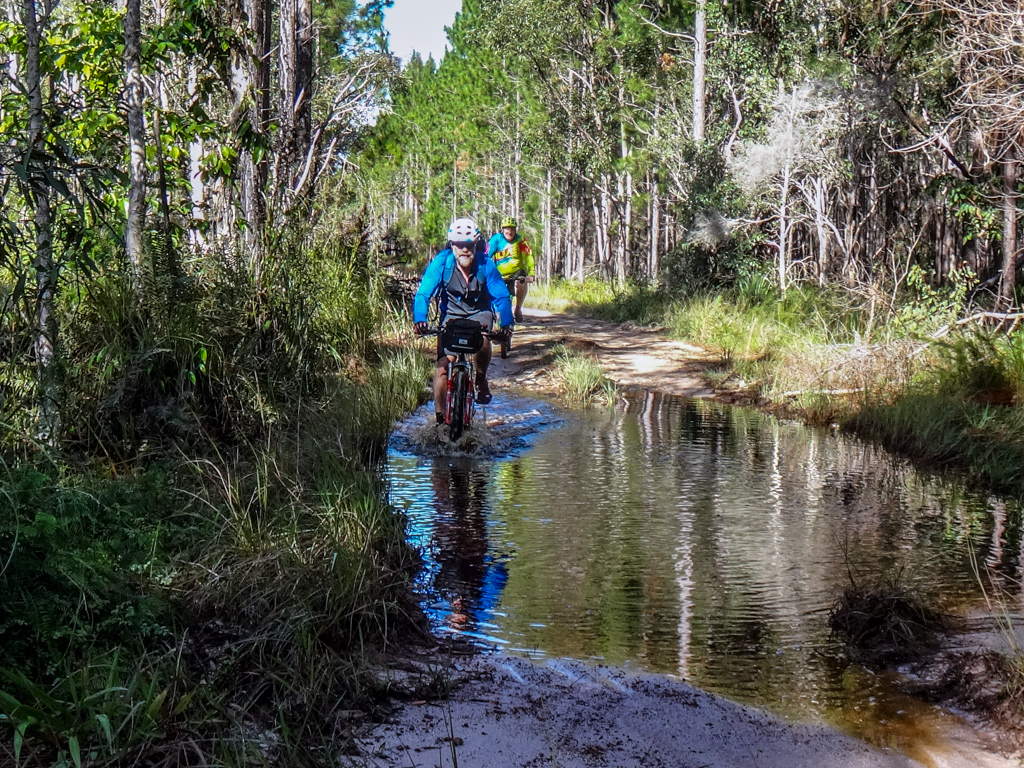 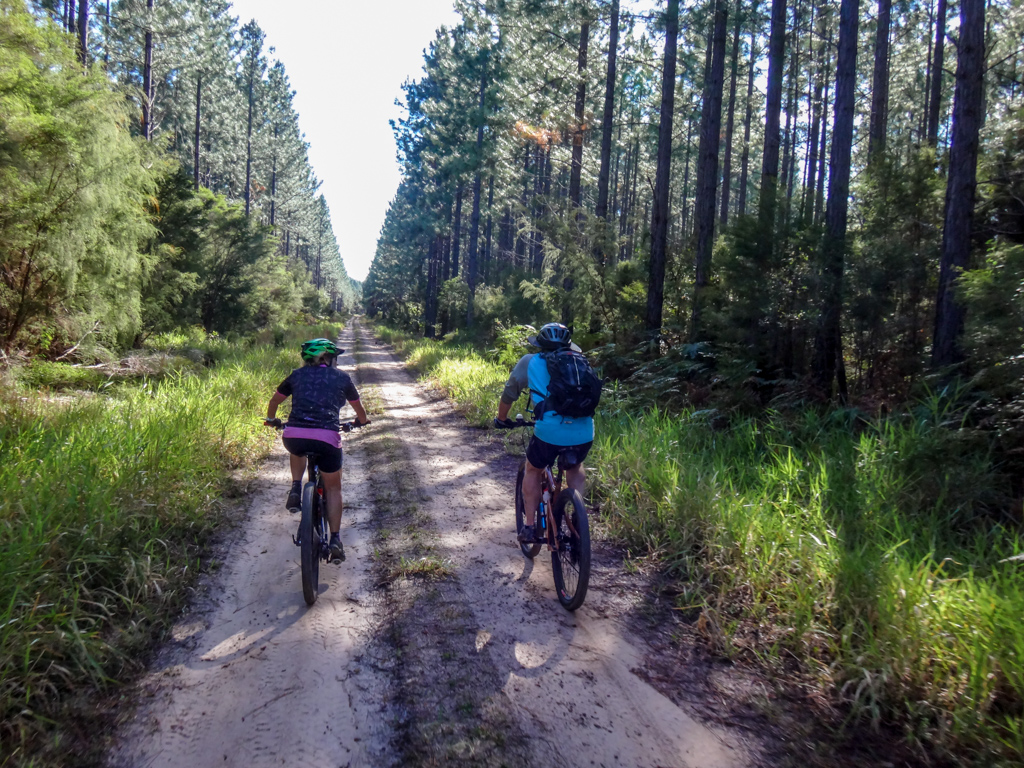 We splashed through a couple of creek crossings, zigzagging along forestry roads until we hit the Cooloola Way. 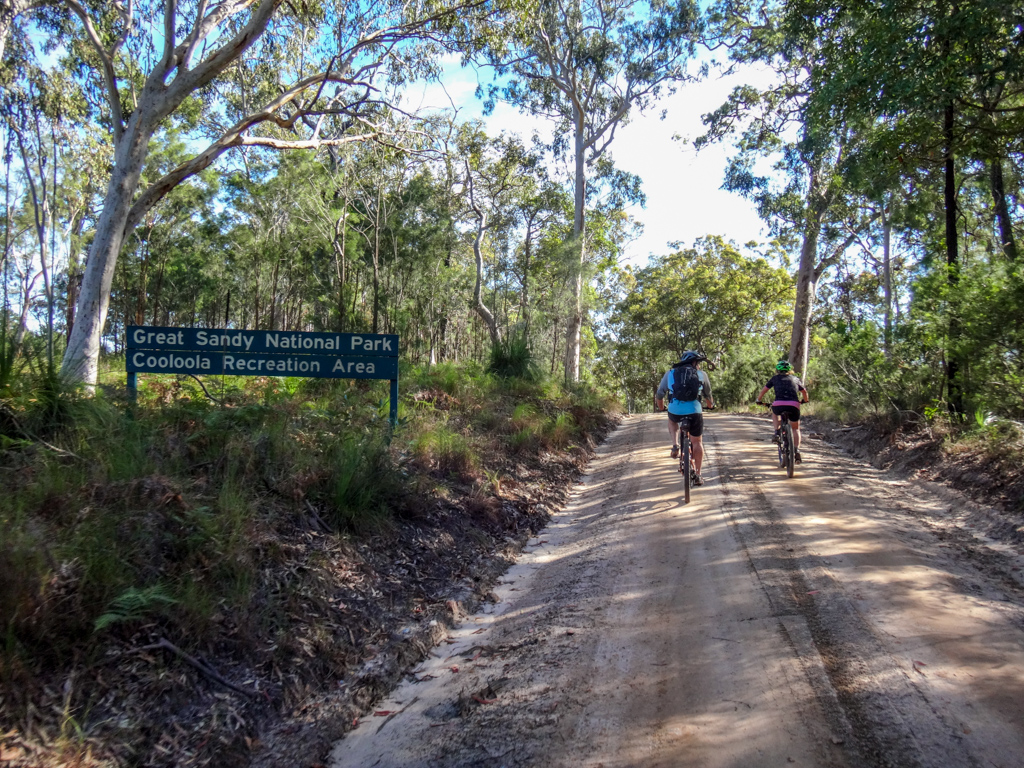 If you’re keen, this wonderful remote track can take you most of the way to Rainbow Beach. 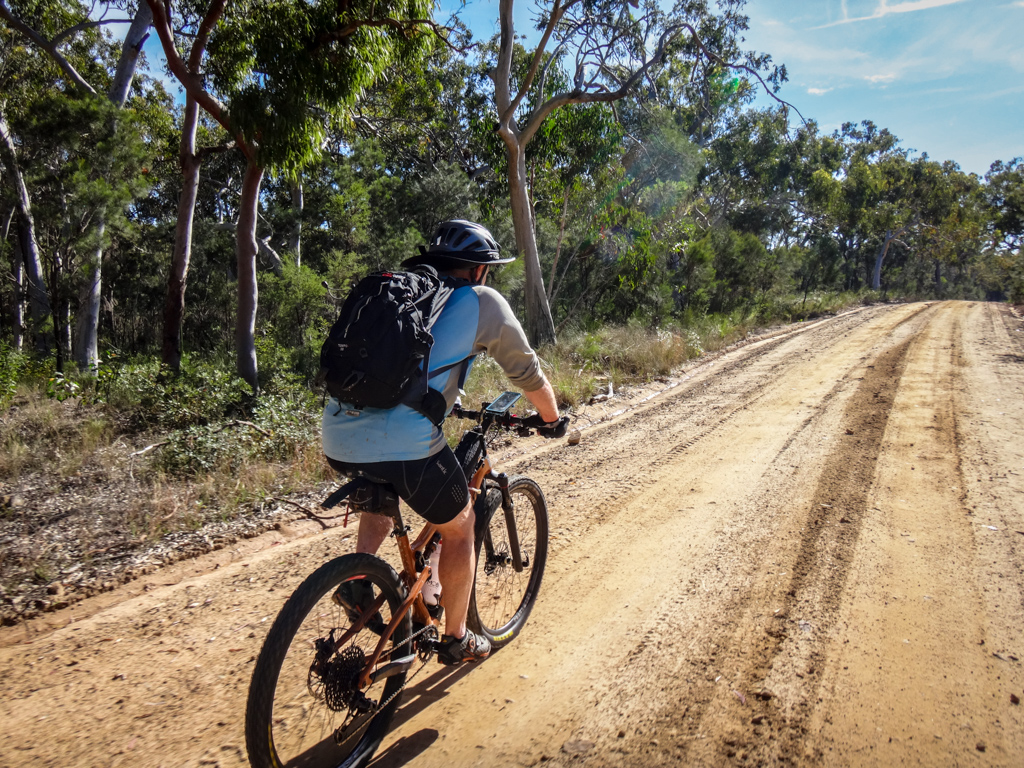 If there’s wanderlust in your heart, Great Sandy National Park is the place to be.

We continued up Cooloola Way until we reached the Wilderness Trail Track, then turned right. 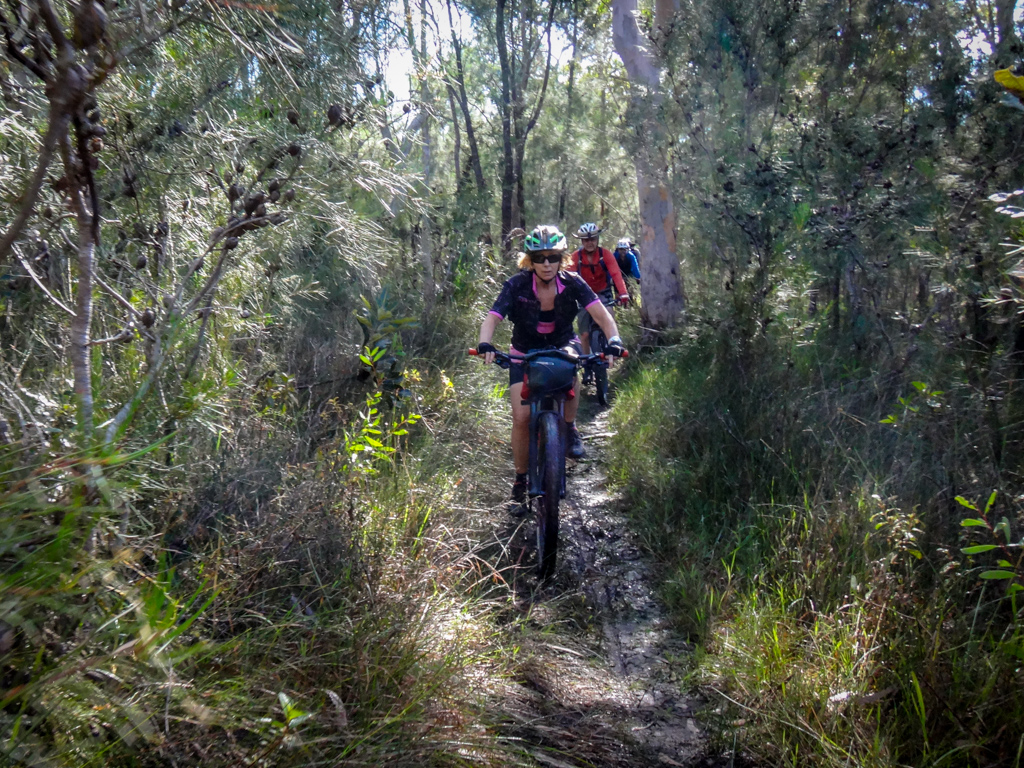 We followed a delightful narrow track for half an hour as it snaked through thick scrub. 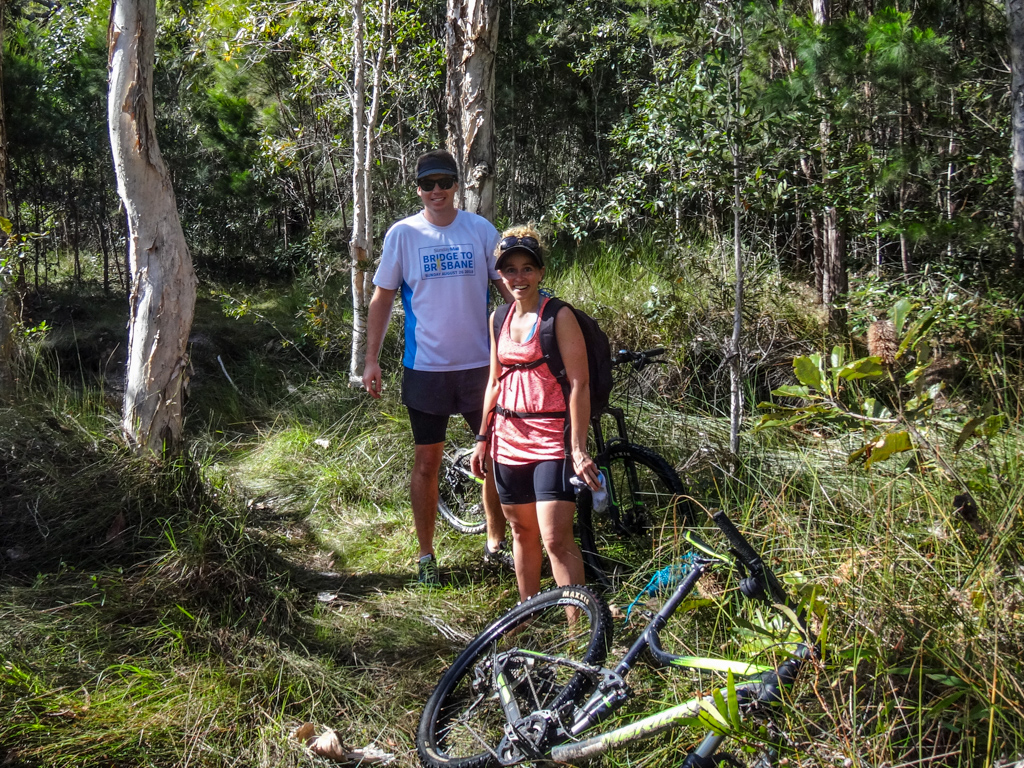 Andrew and Sabrina had the same idea.  They were riding the trail in the opposite direction.

We stopped briefly to say “G’day” and exchange info about where we were headed.

A few minutes later we arrived at Wandi Waterhole. 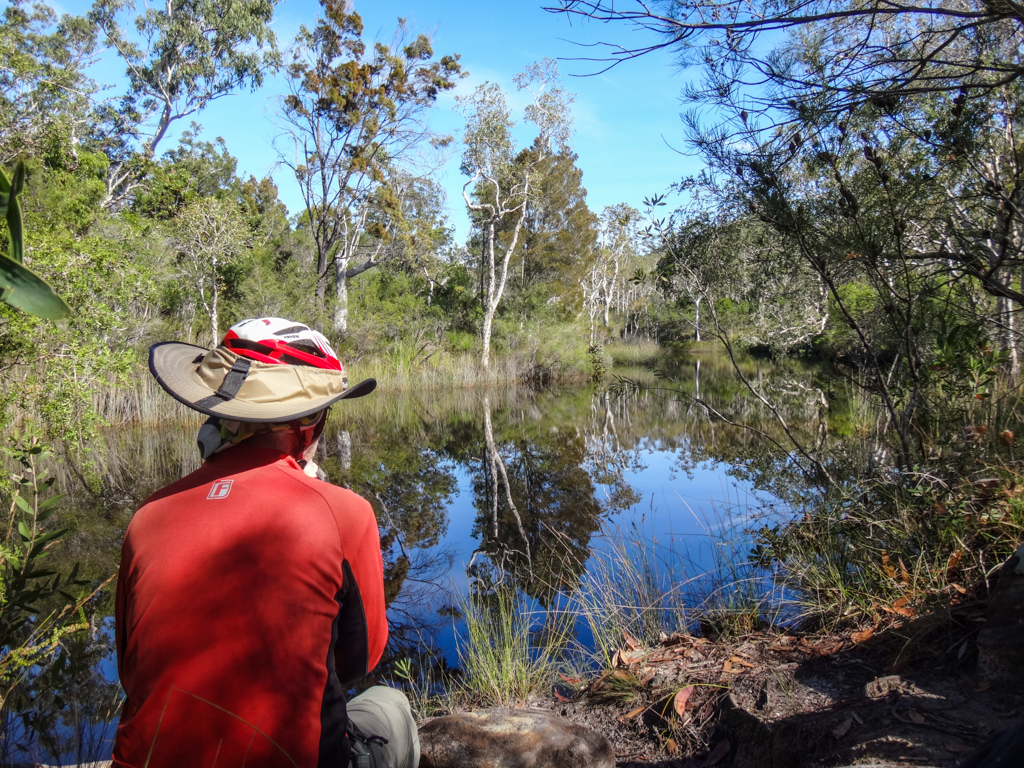 Time for a break.

We parked our steeds and chilled out beside the mirror-smooth water.

After our break, we continued south, crossing a couple of small creeks along the way. 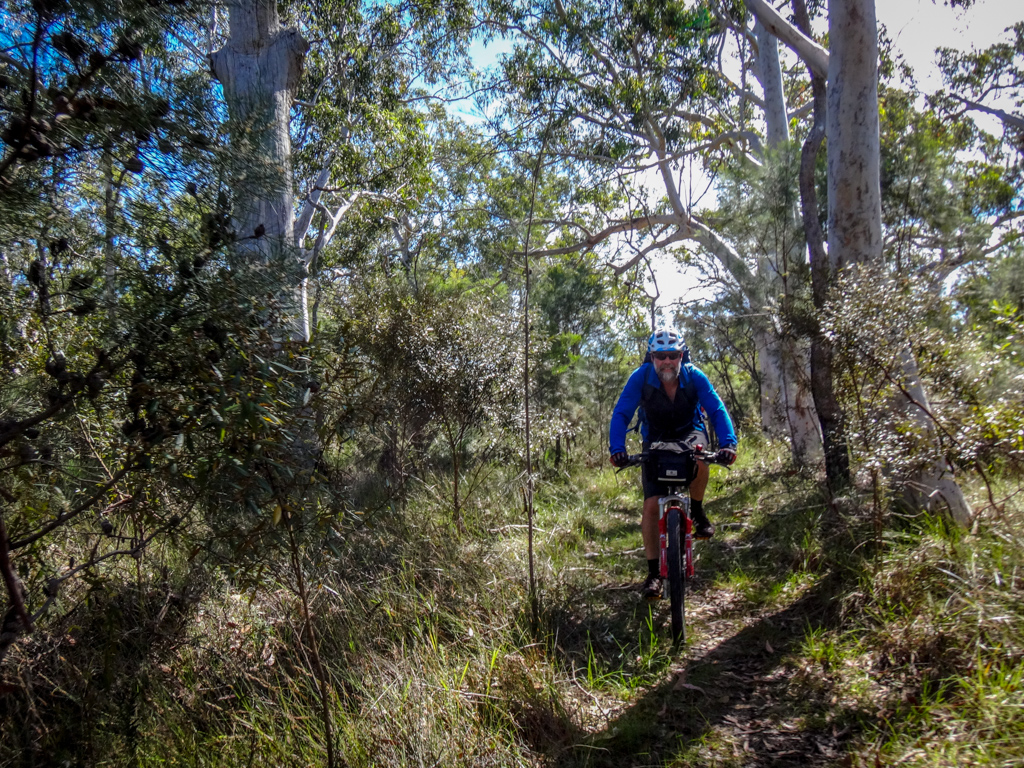 With dense undergrowth on either side, this delightful narrow track continued south for about an hour.

Eventually, we emerged at Eurobi Road. 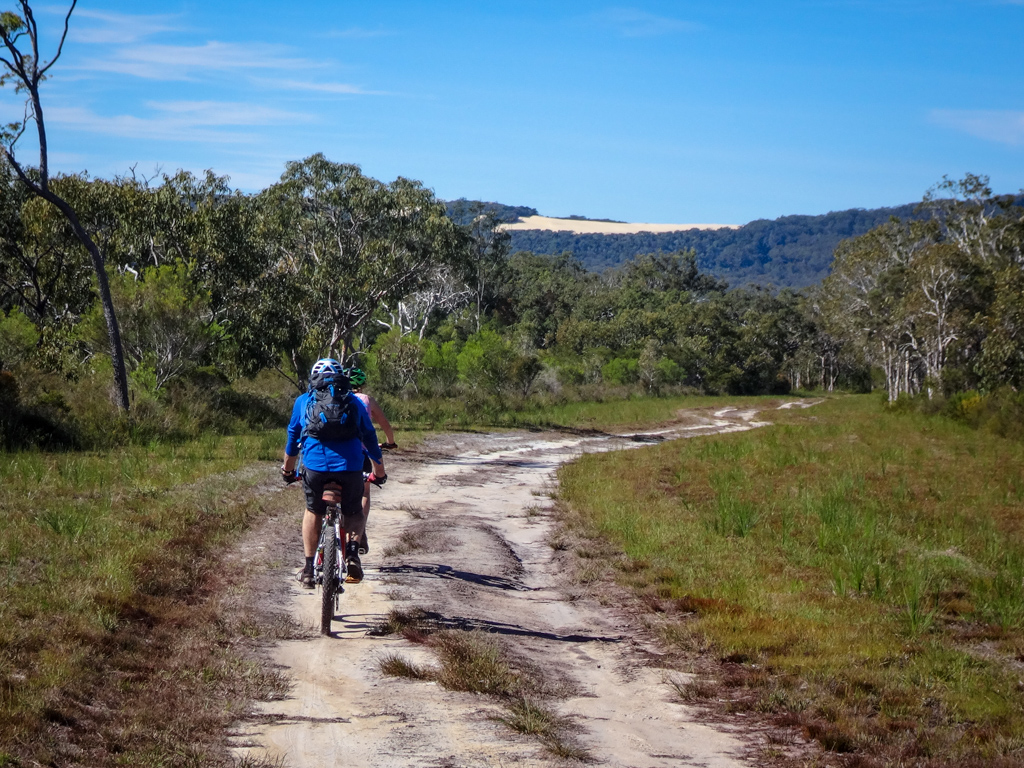 On the eastern horizon lay the Cooloola Sandblow – a large patch of open sand atop a range of dunes which separates the Noosa River from the Ocean.

We followed another narrow track south from Eurobi Road towards “Harrys Camping Area”. 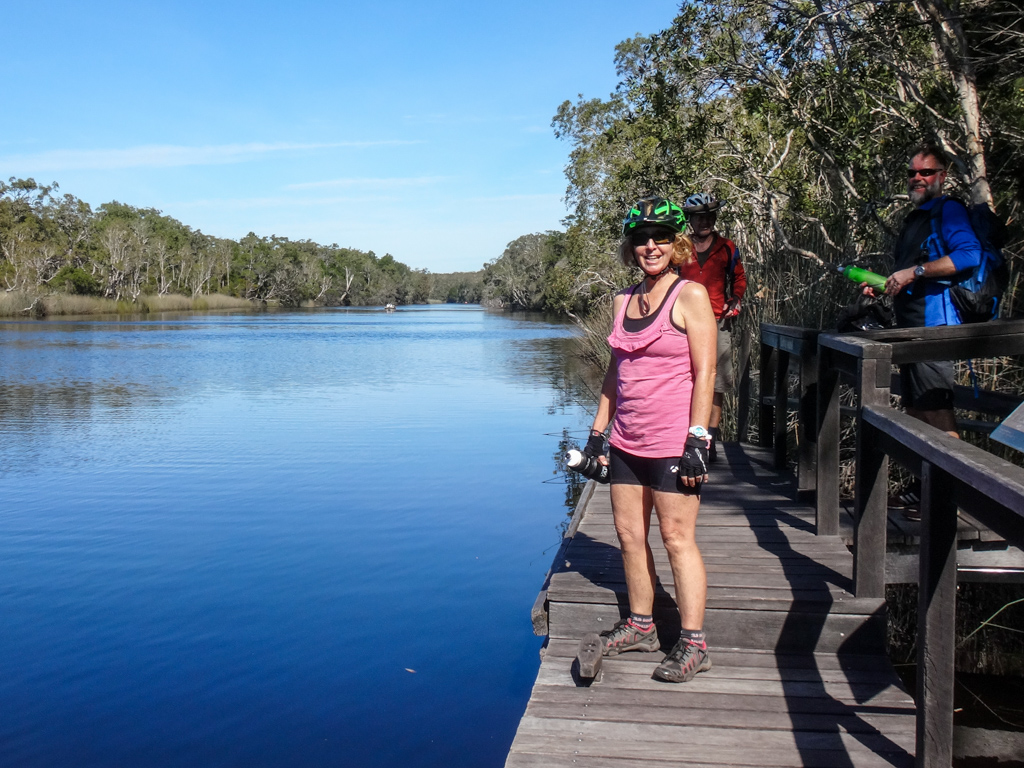 “Harry’s Camping Area” is popular with day trippers and campers.

I’ve arrived here before by Kayak, Canoe, and car.  But the best way is by bike.

We sat on the jetty and soaked it all up. 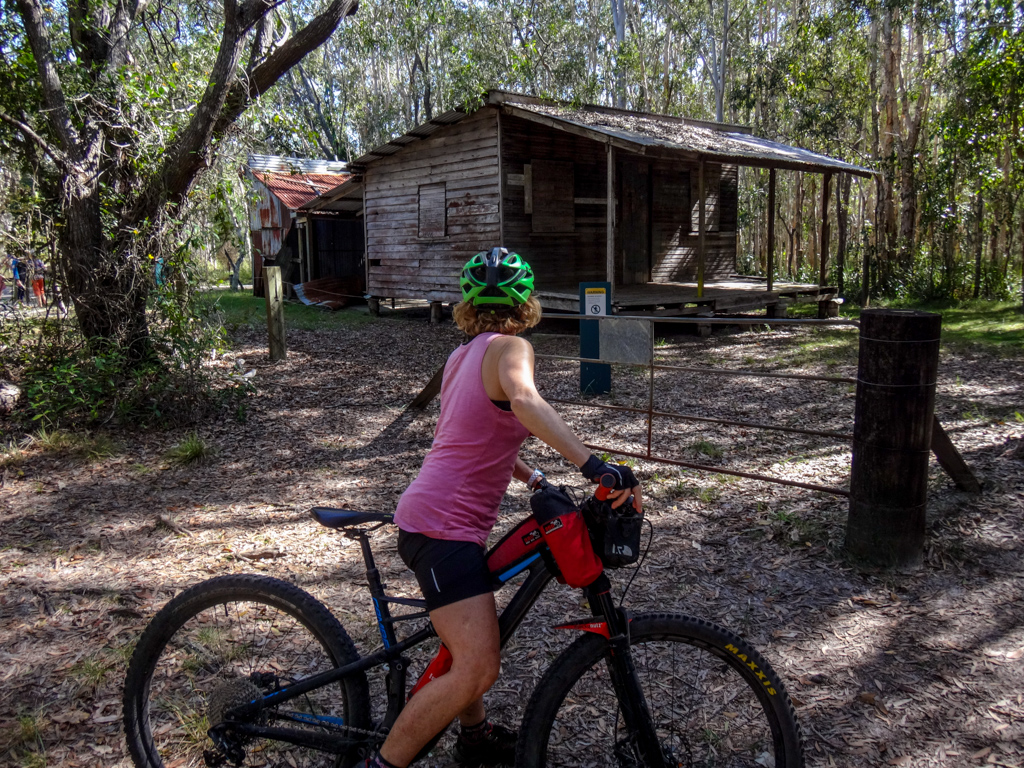 This place is named after Harry Springs – a pharmacist from Cooroy who built a hut here in 1957.  When the government proclaimed the area a national park, they gave old Harry a lease on the hut and surrounding land for the rest of his life.  When he passed away in his nineties, the hut was then heritage-listed.

Imagine what this place would have been like in the late 1950’s when Harry would spend a few nights alone up here.  If only those old wooden boards could talk.

Good on ya, Harry. 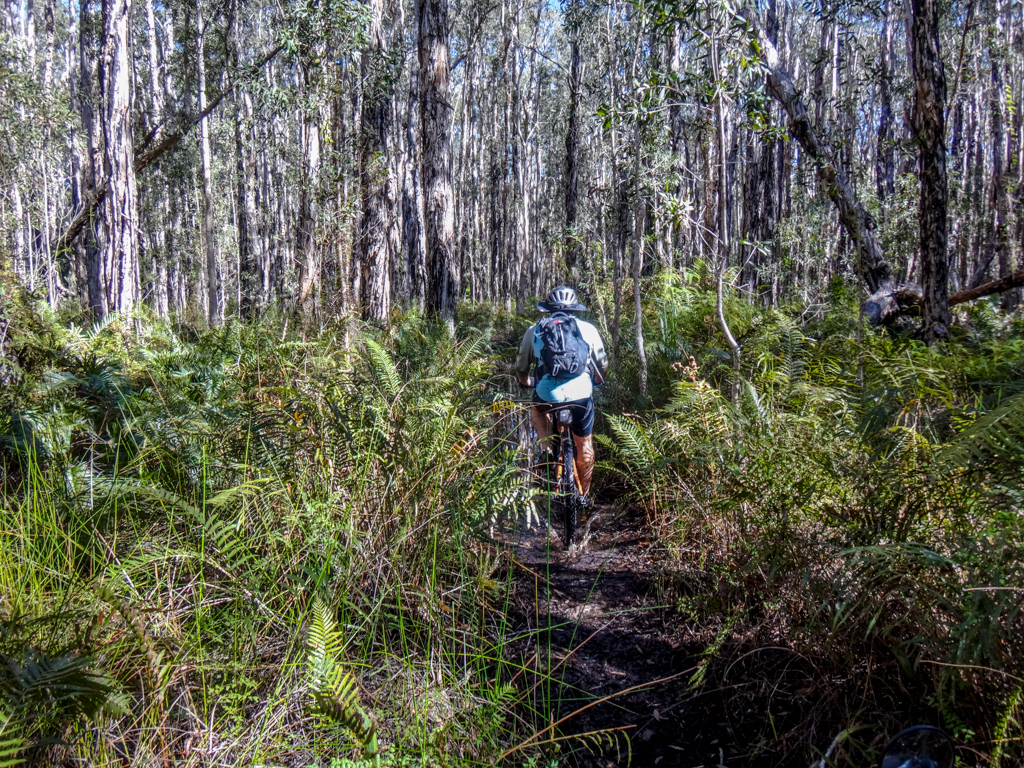 Thankfully, the track was lined with logs to stop people sinking into the mud…

So we got wet feet, but we didn’t get bogged. 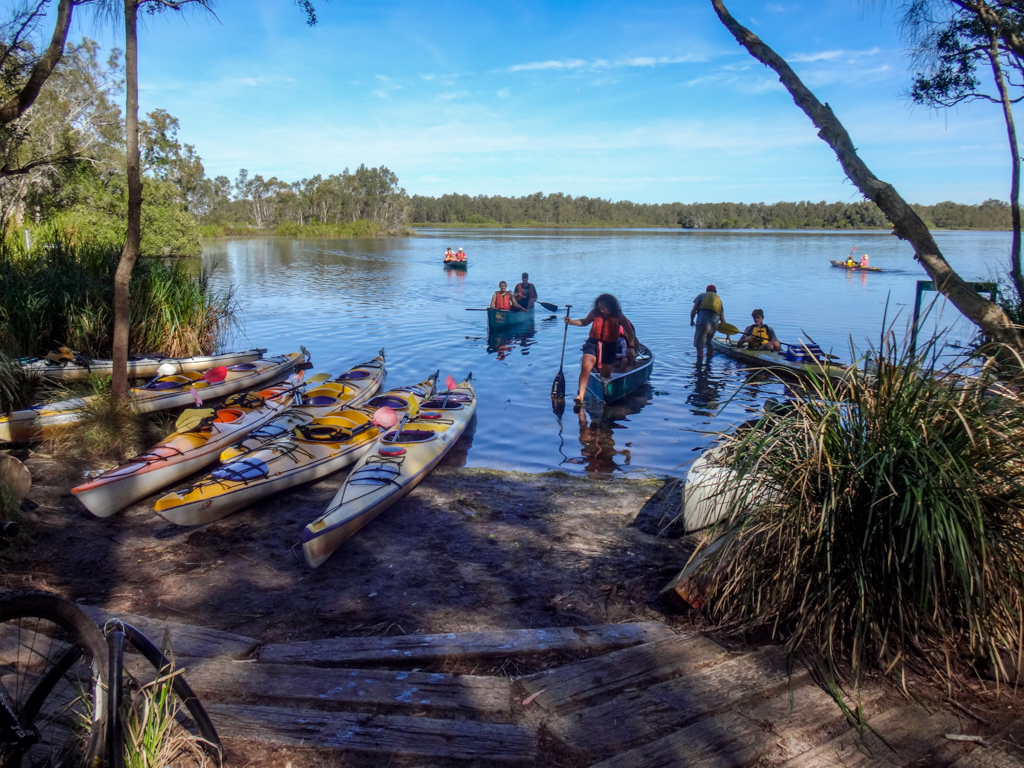 The track emerged at Fig Tree Point – another camping spot on the Noosa River, popular with paddlers.

We took another short break, enjoying the entertainment. 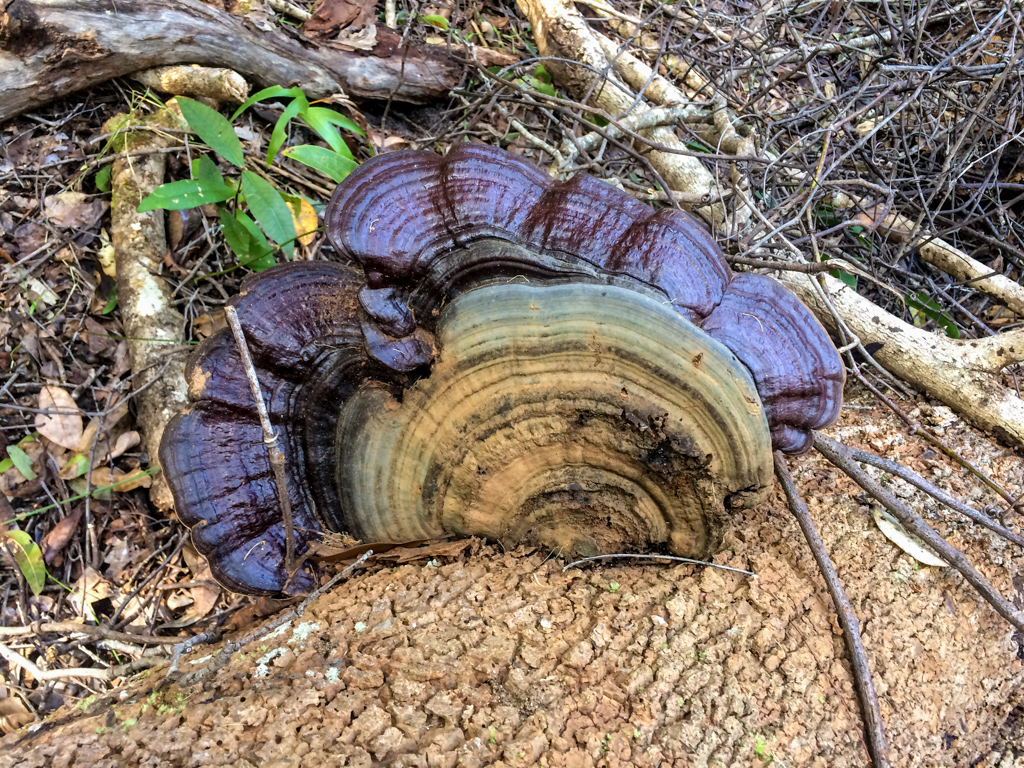 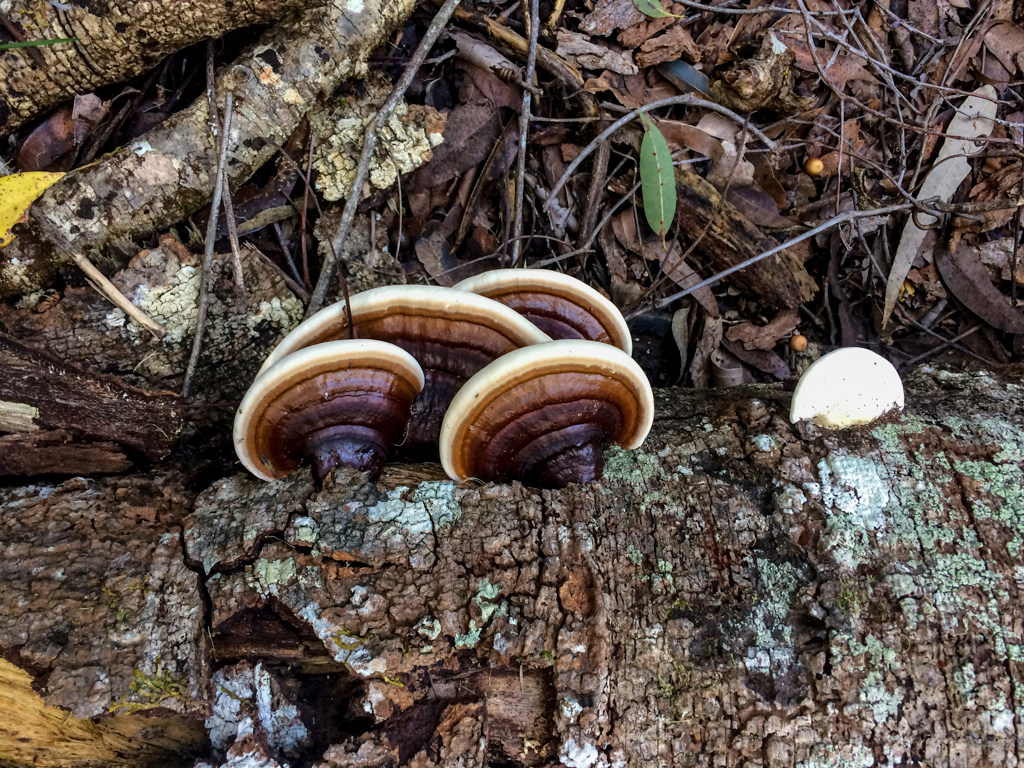 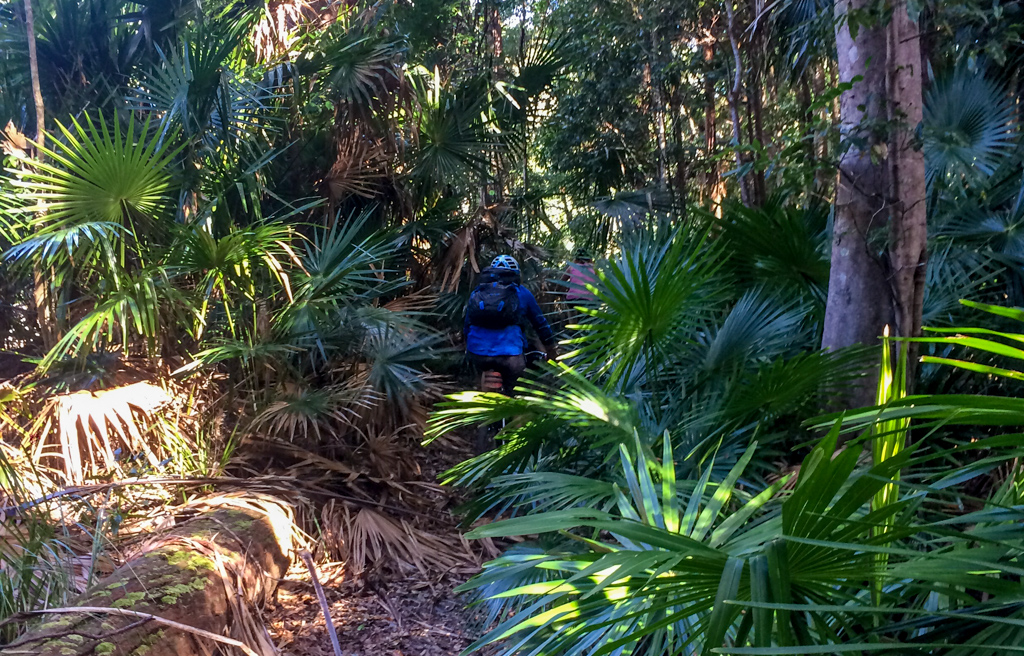 After we left Fig Tree Point, the track narrowed.

In some places it disappeared.

It would be very easy for a careless person to get lost around here. 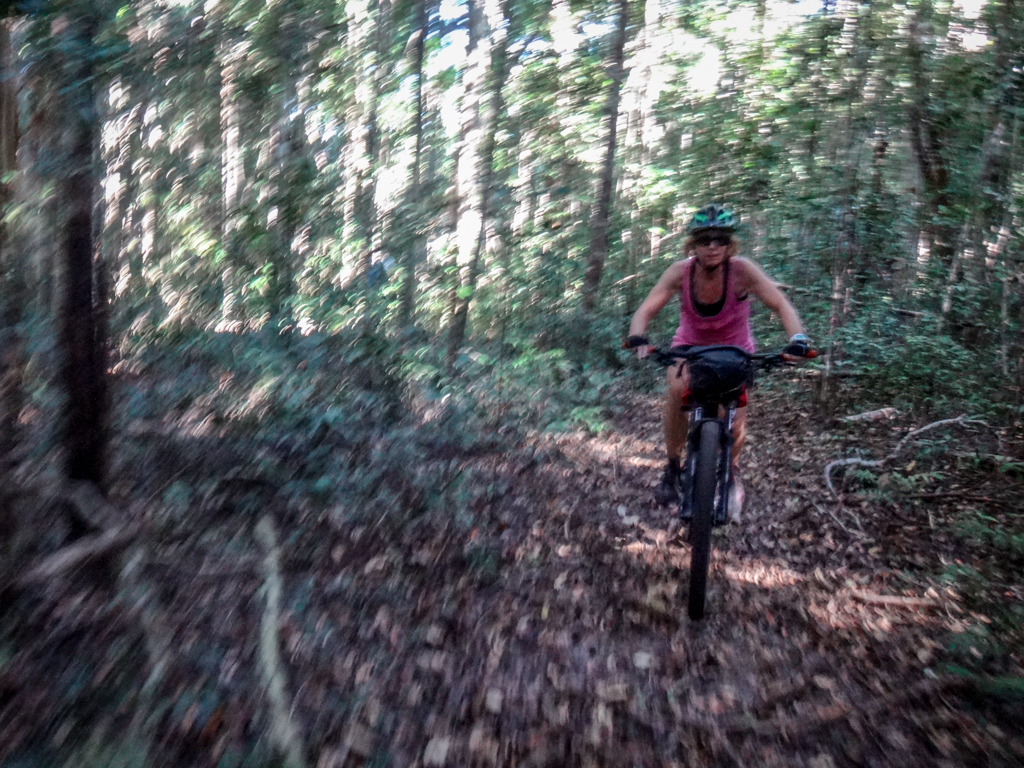 As we continued west, following Kin Kin Creek, the track slowly opened back up.  We could see where we were going. 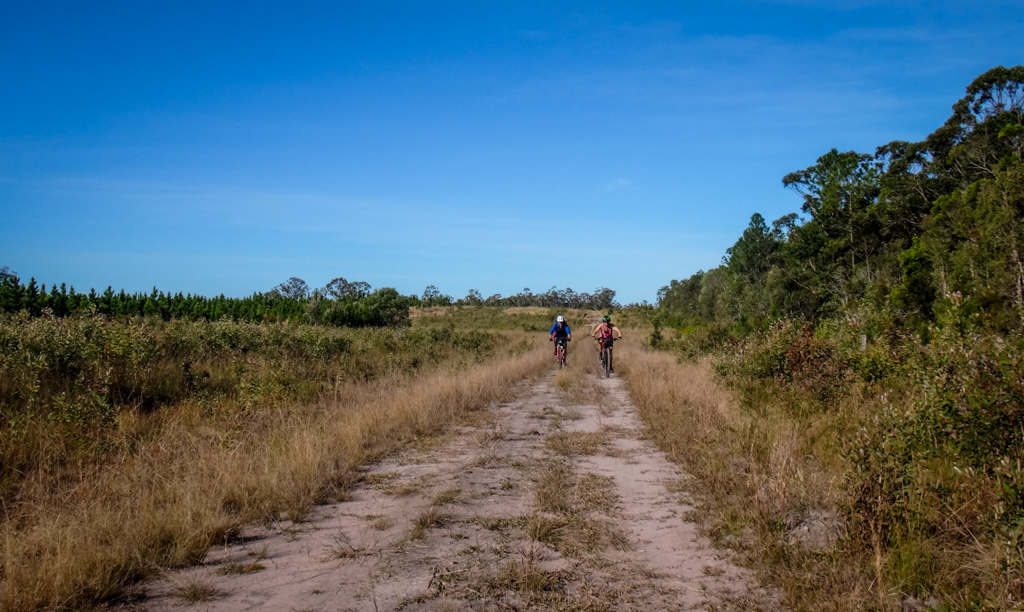 We emerged back on a forestry road and continued westward. 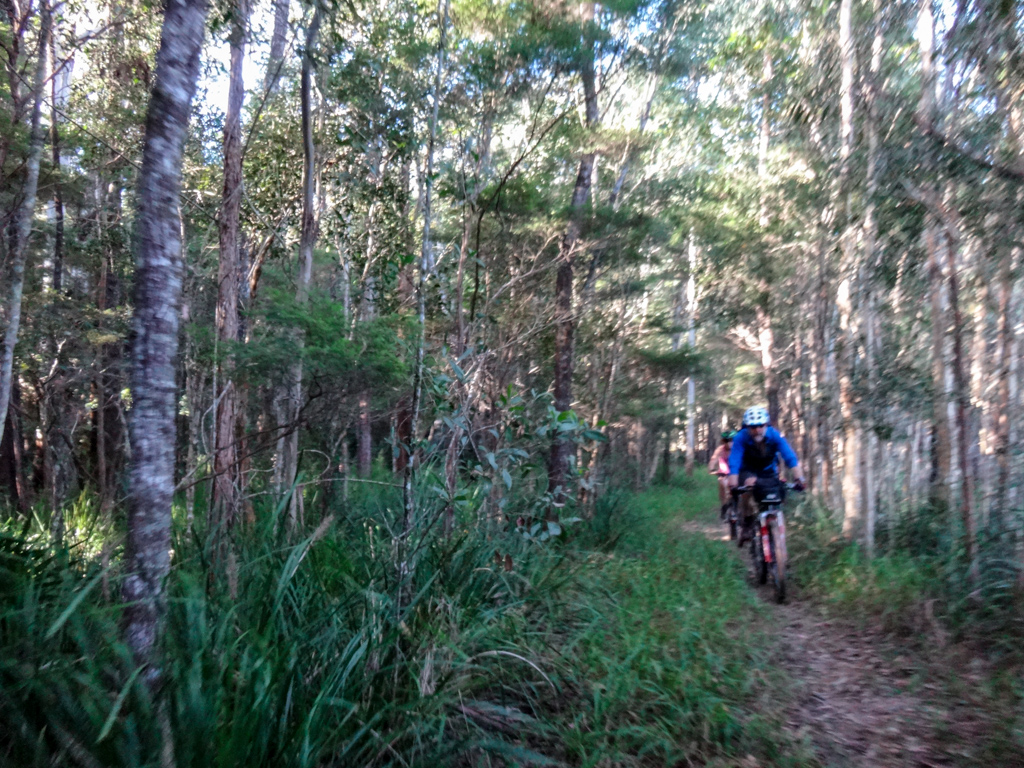 Rather than climb back up the Wolvi Range, we took a detour on another rough track along Galloways Lane and Bates Road.

We rode a total of sixty-five kilometres in about six and a half hours including breaks.

During that time we climbed about six hundred metres in elevation, and I burned about 2,500 kcal.

Due to the rough section along Kin Kin Creek, I’ll rate this one 8 out of 10 on the tough-o-meter.  Unless you’re confident you can find your way in rough rain-forest where no track is visible, it’s probably best to avoid this section.

Thanks Russel, Kaye, Jason, Simon and Paul for another exciting day out on the bikes.