On Day two of our “Big Ride” I had to return home, leaving my friends in Toogoolawah.  They continued their long journey to Gympie.

There is a break in the Brisbane Valley Rail Trail between Toogoolawah and Moore.  You still can’t ride that section.  So when we planned the course, we decided to follow quiet back roads through Ivory Creek instead.

Yesterday’s rain had cleared.  Skies were blue, thirsty grass had turned a contented shade of green, and we headed north along damp gravel roads.

A tourist from Switzerland approached from the opposite direction, riding south.  He had hired his bike in Brisbane and had ridden from Gympie.

When you’re touring, it’s always fun to exchange information with other riders.  Where are you from? Where are you going?  What’s it like up ahead?  What do you think of this place?

At Westaways Road, the road devolved into a farm track.

The generous rain had greened it up so that it looked more like a lush paddock than a trail.

Somewhere a farmer and his cattle were smiling.

The track ran beside power lines up and over the hill for a few kilometres.

We followed it towards Moore.

Once dry causeways were now bubbling with fresh water.

Trudging through wet creek crossings in the rain can be tedious, but on this bright morning it was refreshing to get wet feet.

Including a thirty minute coffee break in Moore, we reached Linville in about three hours.

Paul Heymans has been a long-time tireless advocate for the Brisbane Valley Rail Trail.  He met us at Linville on his eBike.

His friend Malcolm joined us also for the long easy climb up the range.

In the hot humid morning, the flies swarmed thickly.

“Swallowing one is one too many,” Jason admitted, and donned a net.

The others looked on enviously, but kept their mouths closed to keep the flies out.

Someone has created a brilliant sculpture on the trail titled “Fettler’s Rise”, which commemorates the fettlers (railway workers) who toiled on this line.  The sculpture makes it look like fettlers are climbing out of their graves.

It took almost two hours to climb the range.

The gradients are gentle but we had loaded bikes and weren’t pushing the pace.

It was now midday.  With its bakery and cafe, Blackbutt was the perfect place to stop for a quick lunch.

After lunch, we crossed Cooyar Creek on the way to Yarraman.

The grand sandstone pillars of the old bridge still stand, but these days travellers step over stones in the water rather than rattling overhead.

Large old grass trees line the trail around Yarraman.  These striking old sentinels grow about one centimetre per year (or an inch every two and a half years).

We didn’t go in to Yarraman.

Instead we left the rail trail a couple of kilometres outside town, and continued north along Din Din Road towards Nanango.

We noticed the increase in steepness almost immediately.

But we’d been riding rail trail for a day and a half.  It was good to test our legs on bumpy hills.

Some sections of the track were muddy.  We felt grateful that it wasn’t raining today and thought about how difficult it would have been to pedal through here in the wet.

It was a hot afternoon, and Nanango was less than an hour away, so…

Simon decided to have a soak in the water and cool down.

We got into Nanango around 4pm after riding about nine hours.

Unfortunately, the pub didn’t serve meals on Sunday nights, so we ordered a pizza instead.

We climbed about 1,100 metres and rode about one hundred kilometres.

Despite the heat, this was a relatively easy long ride.  We’ll rate it 8 out of 10 on the tough-o-meter.

We had to make some tricky choices on the third day of our ride.

It would be a long day – over one hundred and twenty kilometres to Kilkivan.

Some of the roads on the route were “dry weather only”.  Should we ride them and risk getting bogged?  Or should we take a detour to Kingaroy, adding some extra distance, but avoiding the mud?

We considered our options as we rolled out of Nanango along Booie Road.

Paul had planted a seed in our minds the day before.

As far as he knew, no one had ridden the Brisbane Valley  and South Burnett Rail Trails from Ipswich to Gympie before.  If we rode via Kingaroy we’d be able to say we were the first to do it.

Everyone agreed, so we deviated westwards towards Kingaroy.

Redvale Road is steep in places…

…but the views were great.

Towards the end the tall eucalypts gave us welcome shade from the sun.

It took us ninety minutes to get to Kingaroy and the start of the South Burnett Rail Trail.

This rail trail is paved.

After riding muddy tracks for over two days, we were glad to be travelling on a firm surface for a while.

It’s a pleasant experience when you’re riding down the slope.  Pedaling feels effortless – you have a gentle push as you ride downhill.

We’ve ridden this section both ways and much prefer this direction.

It’s gruelling to come back the other way.

It took us about ninety minutes of easy riding to reach Wondai.

Half an hour later we rolled over Barambah Creek.

The water looked fresh and inviting, so…

…Simon thought it would be a good idea to have another quick swim.

We rode beside the creek, just outside of Murgon.

It was close to midday and we were hungry.

Our train pulled into Murgon after about five hours.

We parked the bikes outside the pub and hungrily devoured lunch.

The rail trail reverted back to gravel outside of Murgon.

With full bellies we continued the gentle downhill roll towards Goomeri.

Storm clouds started boiling in the west.  Would they catch us?

There are a lot of spring-loaded gates out here.

The strong spring on the gate forces it shut after you pass through, preventing cattle from escaping.

The only problem is that the springs are quite strong.  It was tricky getting our bikes through the loaded gate without getting caught.

The clouds continued to build.

A strong breeze started pushing against us out of the east.

With little to shelter us from the wind, we had to work hard against it.

There are some beautiful old bridges on this section of the trail.

We still had almost an hour to go before we reached Kilkivan.

We were going to get wet.

Large drops splashed down on Wide Bay Creek.  Should we look around for a shallow crossing or just wade through?

Either way we were going to get wet…

So we just waded in.

We could have detoured via Cinnabar Road and Tansey Road, but that would have added another half an hour to our ride – we just wanted to get out of the rain.

We arrived at the Kilkivan Pub damp and tired.

Jason got the best view in town as he sat on the first floor balcony of the pub and watch the rain fall.

One hundred and twenty kilometres in just under nine hours – that’s a big day for anyone, but it wasn’t as difficult as we expected.

Day four of our epic ride was the shortest but toughest.

We were on a deadline.

If we didn’t arrive in time, we’d have to wait another night in Gympie.

We left just after 6am, an hour earlier than normal, so we could get a head-start.

It was hard work following the BNT from town.  The steep climb was harder than normal with our heavy bikes, and was a rude way to start the day.

We crossed the highway and followed some quiet back roads in a north-easterly direction towards Woolooga.

After about half an hour we left the roads rejoined the old railway line.

This section once took trains from Kilkivan to the main line at Theebine Junction north of Gympie.

Today we’d be following it as far as Woolooga.

Our best engineers build things to last, but nature always wins in the end.

We rode upstream a short distance to find a shallow place to cross.

We lifted the heavy bikes as high as possible to keep water out of the hubs.

Jason’s bike was heavier than the others, so we helped him to get it over the creek.

Yet another beautiful old railway bridge spanned the creek.

This is pretty country. 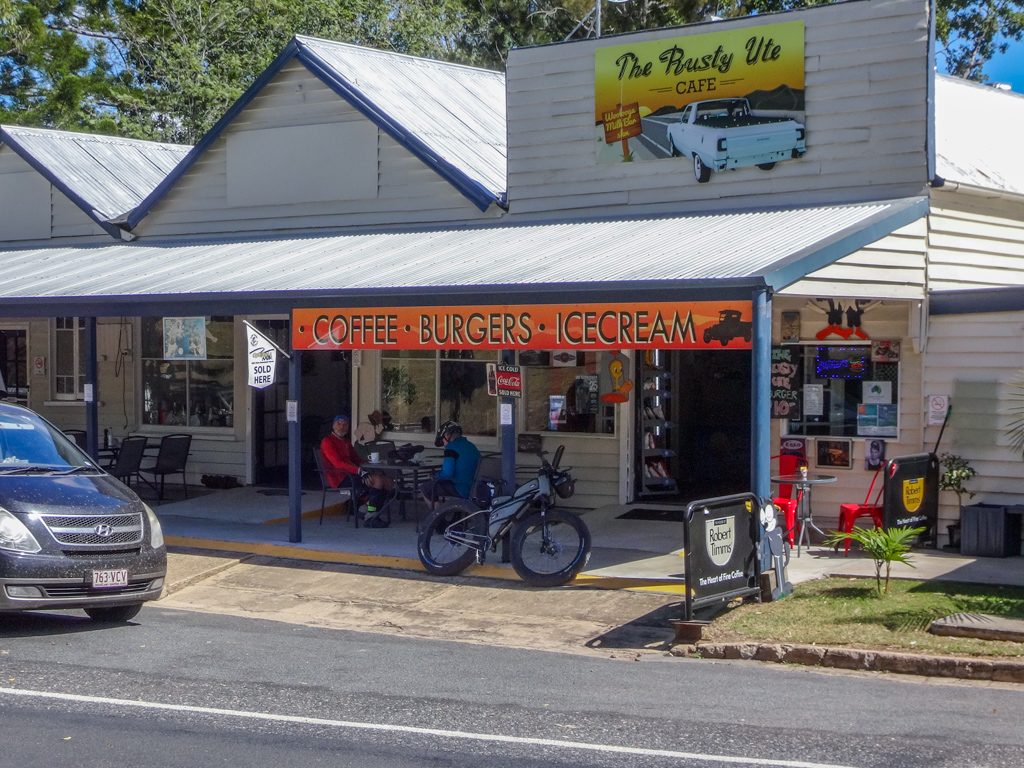 We stopped at Woolooga for breakfast.

There had been no breakfast at the pub, and we’d left in a rush before having anything to eat.

It was good to fill the fuel tanks.

On previous rides we had discovered a disused old road which took us in the right direction but kept us away from traffic.

We followed it for a few kilometres, through another wet crossing.  We were old hands and crossing creeks now 🙂

On the southern side of the Wide Bay Highway, we followed more quiet gravel roads towards Brooyar State Forest.

The wide open spaces out here are breath-taking.

If you feel crowded in a big city, this is the perfect place to come and relax.

We rode through a macadamia farm and down a red clay hill into the state forest.

Unlike previous times, Widgee Creek was in full flow today.

We splashed through several crossings.

On rides like this, I’d prefer to get wet feet from a few inches of water than  easy through dusty dry causeways.

The last section of our ride followed moderately busy paved roads into the south side of Gympie.

If we had more time we would have ridden dirt roads further south towards Traveston Railway station, but we were on a deadline, and decided to tolerate the traffic so we could reach the train on time.

We arrived in time to get a quick bite to eat and change into some comfortable clothes for the two-hour railway trip back to Brisbane.