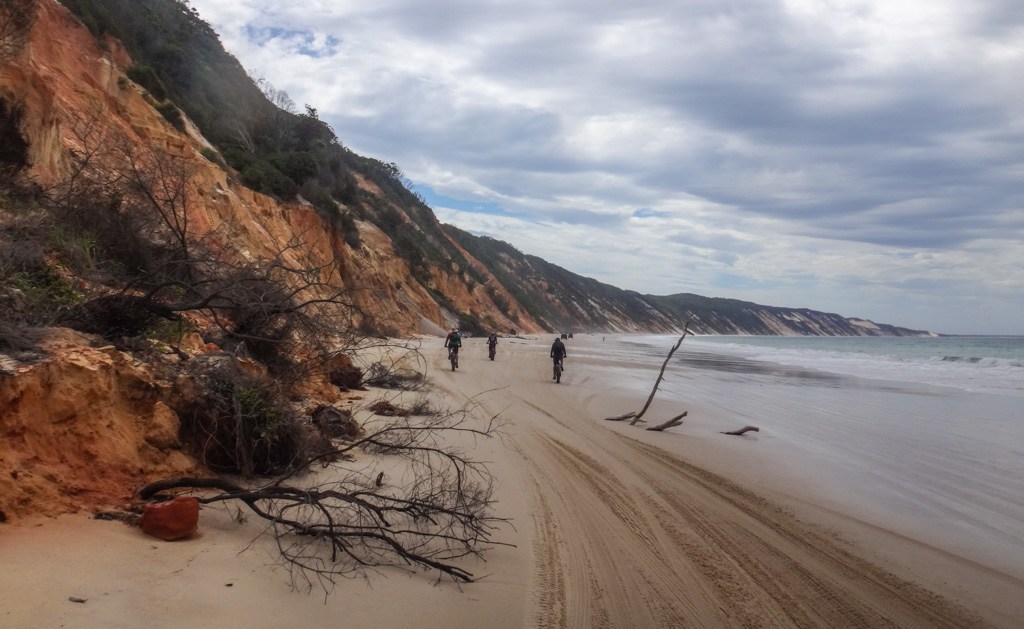 On our recent holiday to Rainbow Beach, we saved the best ride till last. This loop out to the freshwater lakes, and back via Double Island Point must surely be one of the most spectacular rides you can do.

My friends got up early for the long drive from Brisbane.  I got up late, rolled down to the beach and watched the swimmers in the waves while I waited for everyone else to arrive.  What a beautiful morning! 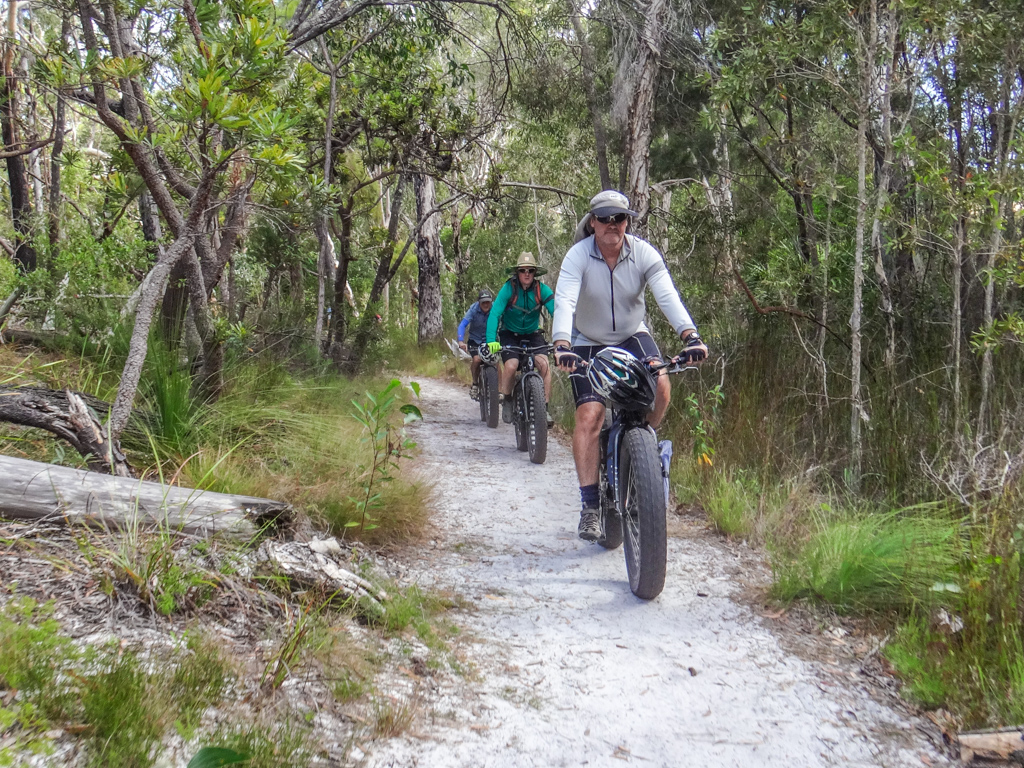 The low tide was in the afternoon, so we started our ride by heading inland, leaving the beach till later in the day. 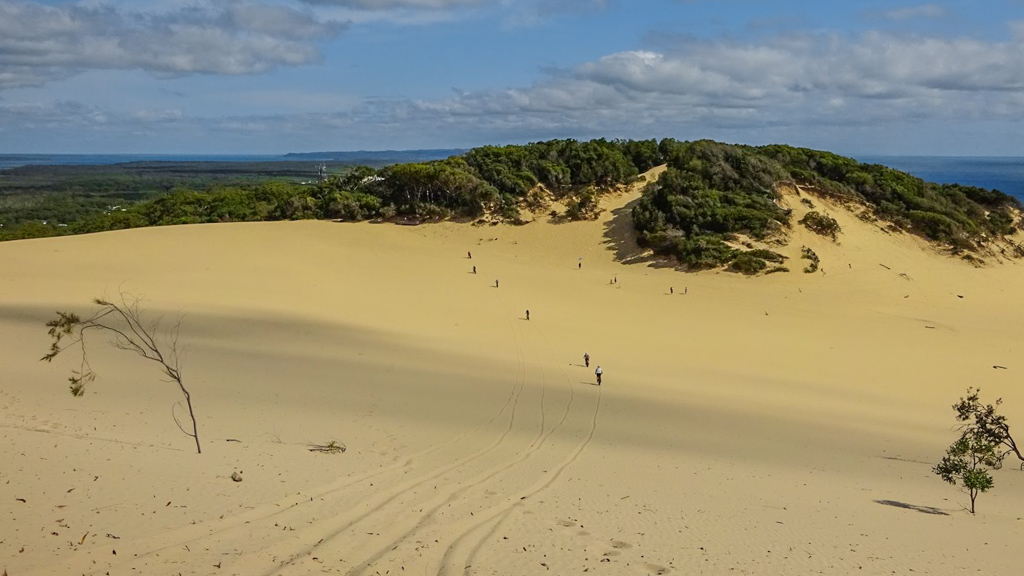 Our first stop was Carlo Sandblow.

I cautioned everyone: “If you feel insane enough, we can ride across, then loop around the back of the sandblow, and push the bikes back the last hundred metres”.

Everyone was insane – except Jason who had skinny tyres and decided to be a spectator for this section of the ride. 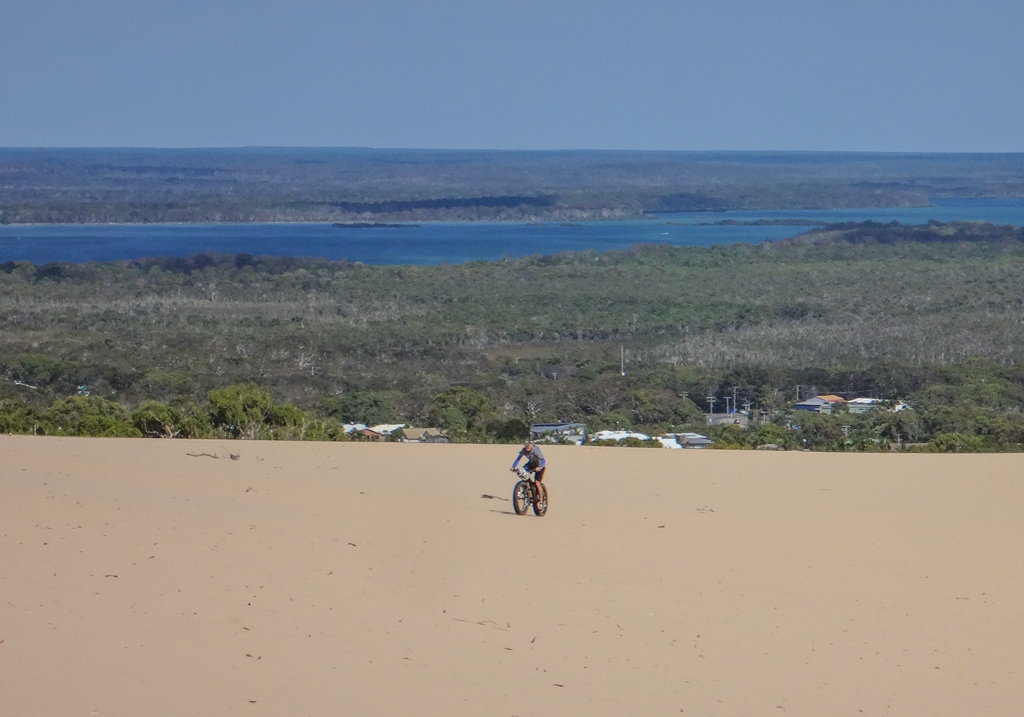 Nick showed us how it was done, then decided to roll back down the hill a second time because it was so much fun.

My hat fell off.  So I had to retrace my steps, retrieve my hat, then do a looooong push uphill through soft sand.

In the distance, far below, sunlight shimmered on the Pacific Ocean.

Despite the hard work, this was stunning. 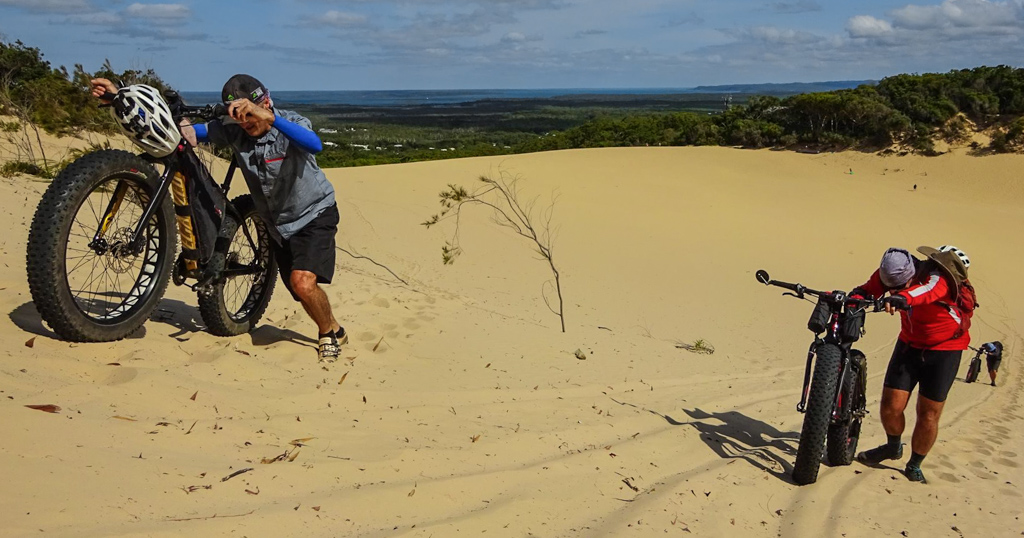 No mortal can ride the last uphill section, so we all had to push, eventually. 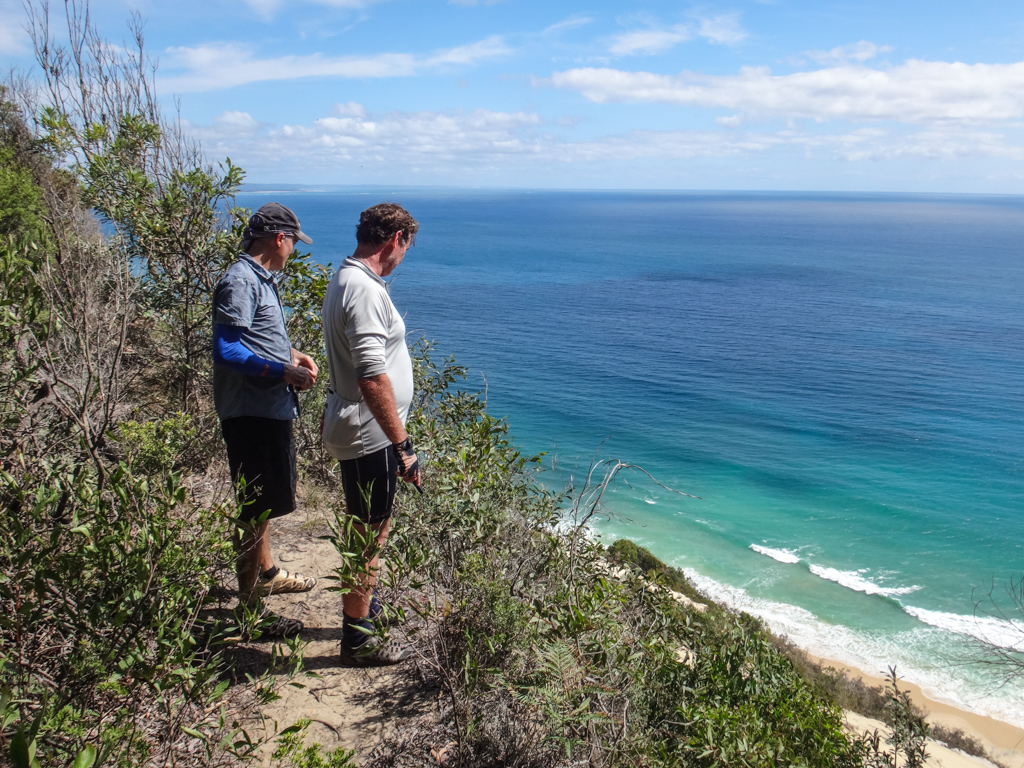 We got back on the track and rode through the forest for a couple of kilometres to a secluded lookout that Darb had come across last year.

It was a sheer drop, and a long way down to the beach.

“Do you think we could ride down that slope?” someone asked.

Everyone else chuckled nervously. 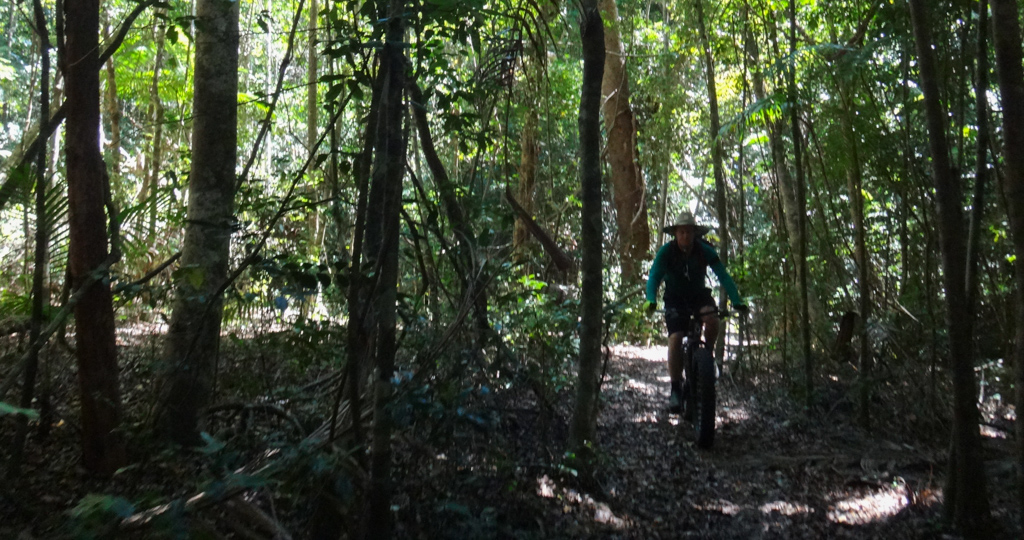 At the top of the hill, we crossed the 4WD track and started a leisurely downhill run through the rainforest.

Trees grew thickly and provided cool shade from the sun.

Rolling downhill in cool shade – what an easy way to ride 🙂 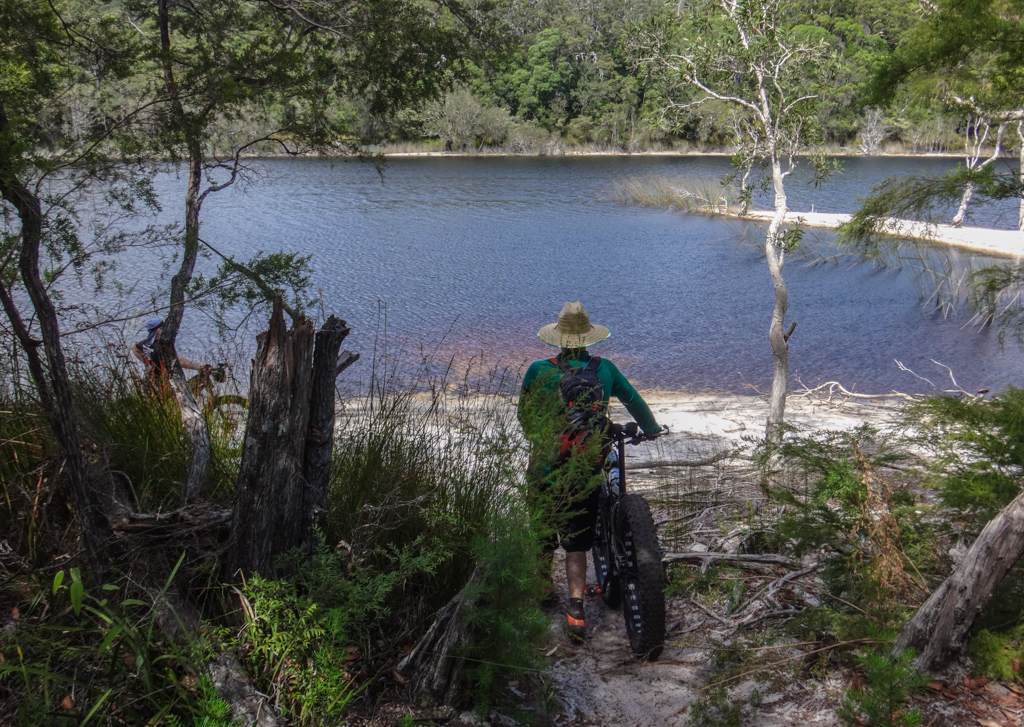 At Poona Lake we parked the bikes and decided to have a quick swim.

The water is stained browny – red from the tannin in the leaves.  But it was clean and cool and we enjoyed it.

We seem to be doing a lot of swims on our rides at the moment, don’t we? 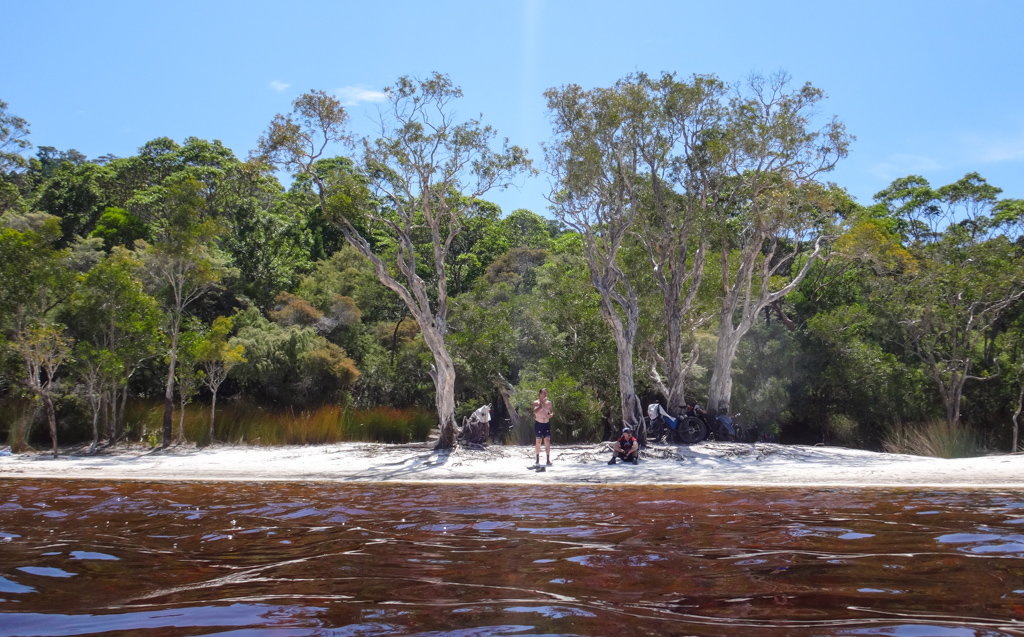 It was a perfect spot to rest on the white sand, have a quick snack, and keep cool in the shade. 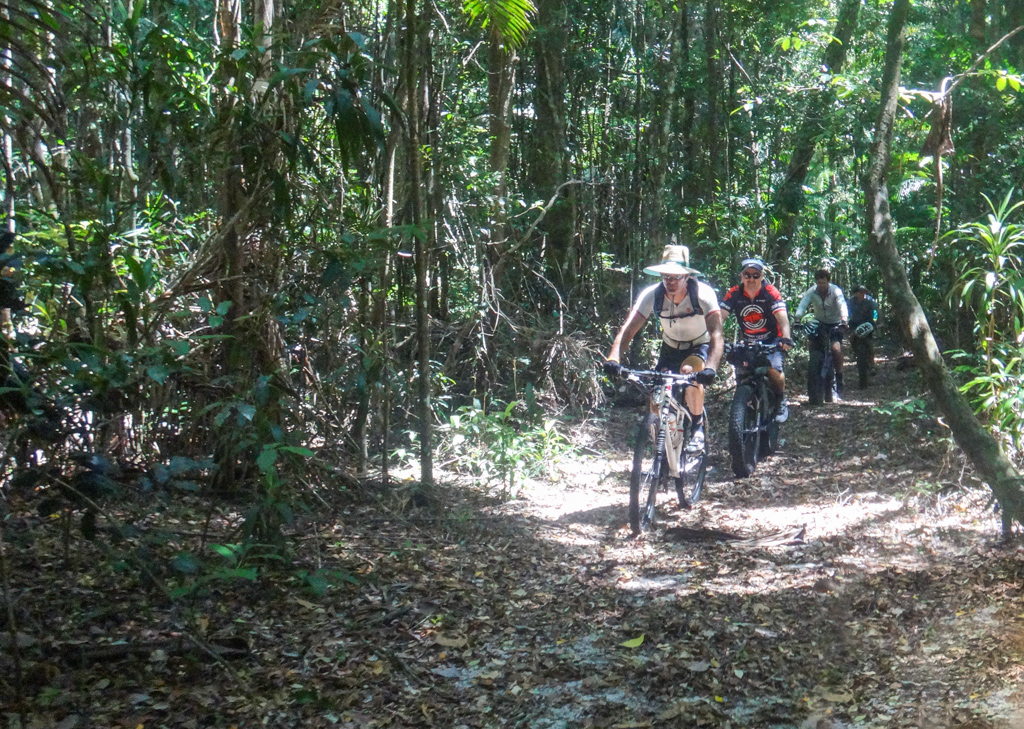 After leaving the lake, we enjoyed another wonderful downhill roll through the shady forest. 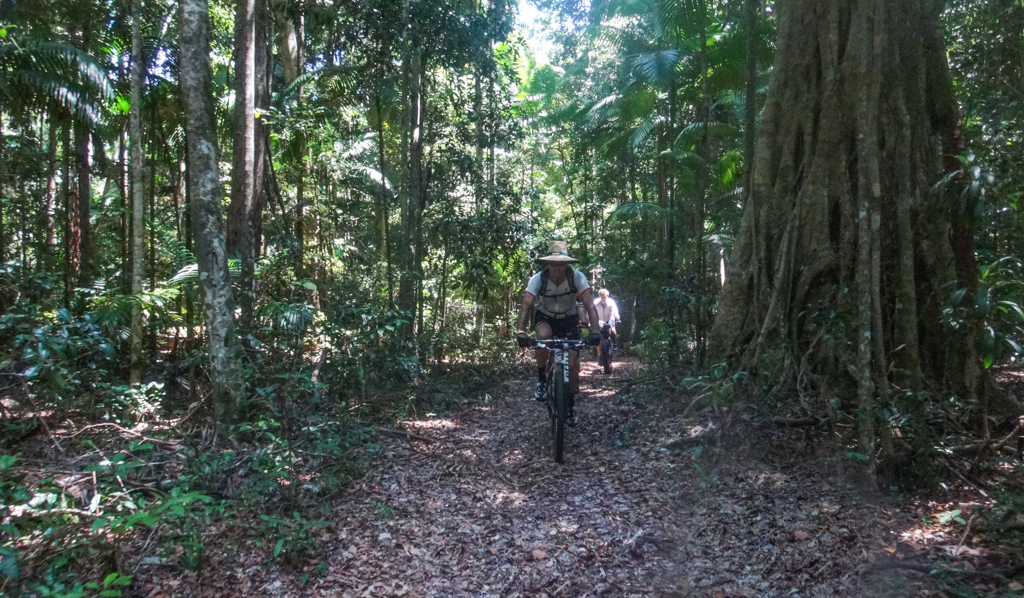 Although there were a couple of climbs, the track descended for ages.

Last year we had ridden this track in the opposite direction, and I had found the continual climb very tiring.  Today was almost effortless as we glided past verdant piccabeen palms and towering ancient figs. 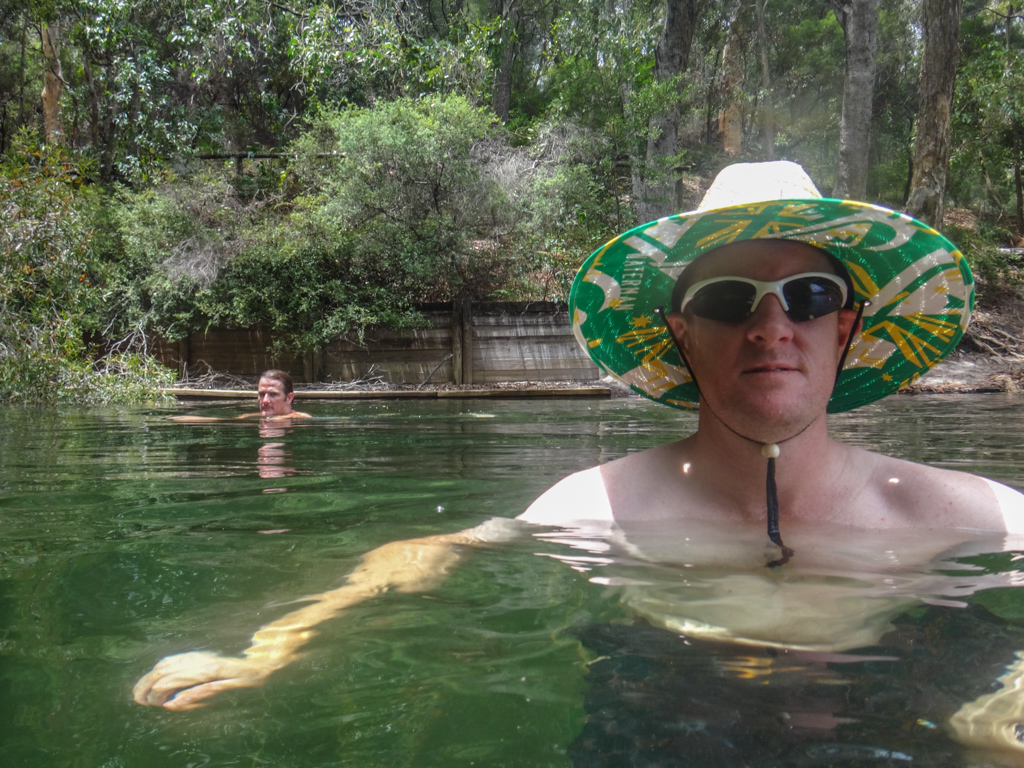 At Freshwater Lake we stopped for another swim. 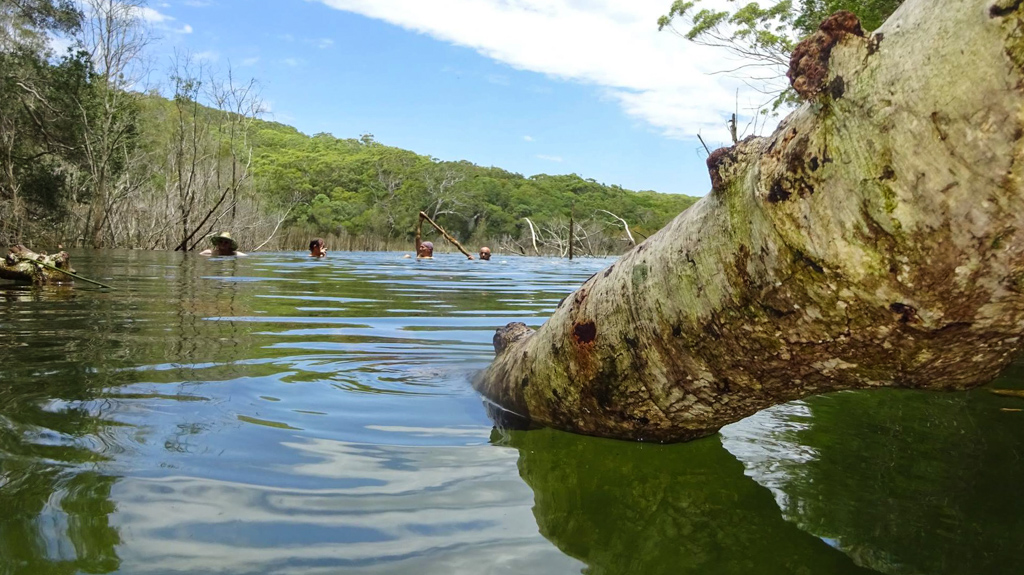 We perched on a submerged log like lazy aquatic crows and let the water do its magic. 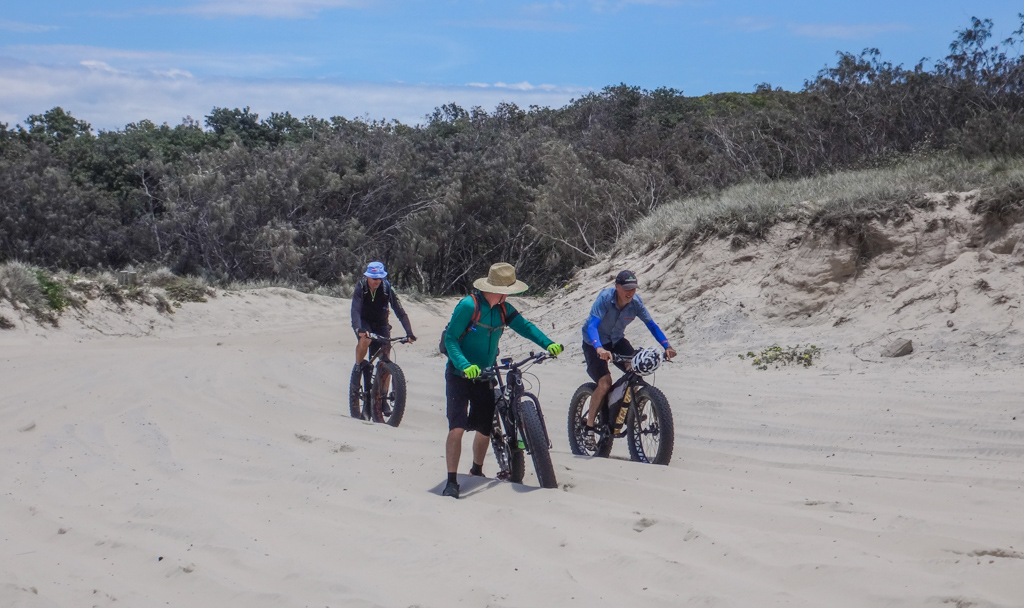 Back on the bikes again, we finally emerged on the beach via the “Freshwater” 4WD track.

The sand was soft.

Some of us were able to ride out on the soft sand, others pushed. 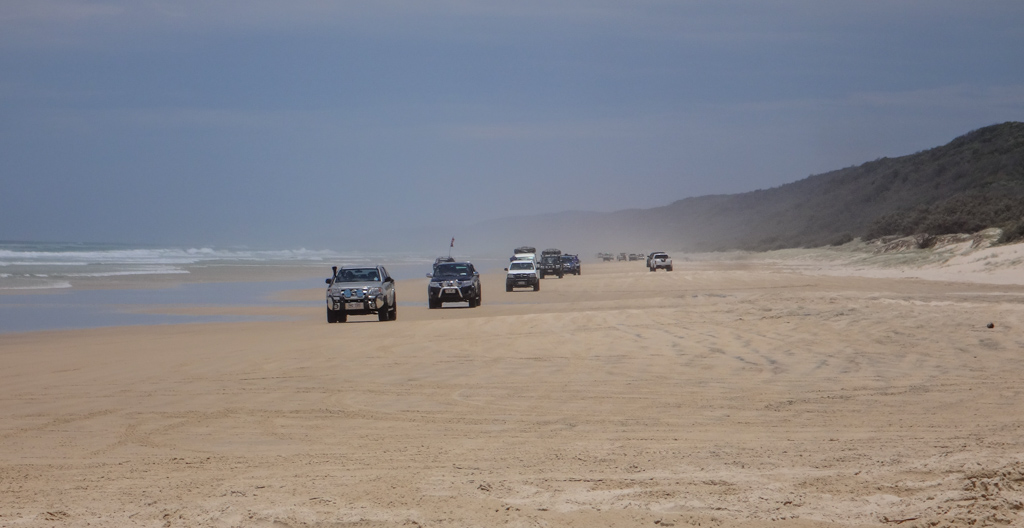 It was the Australia Day long weekend.

The beach was a freeway with happy looking 4WD’s sporting huge Aussie flags, all rumbling up the beach. 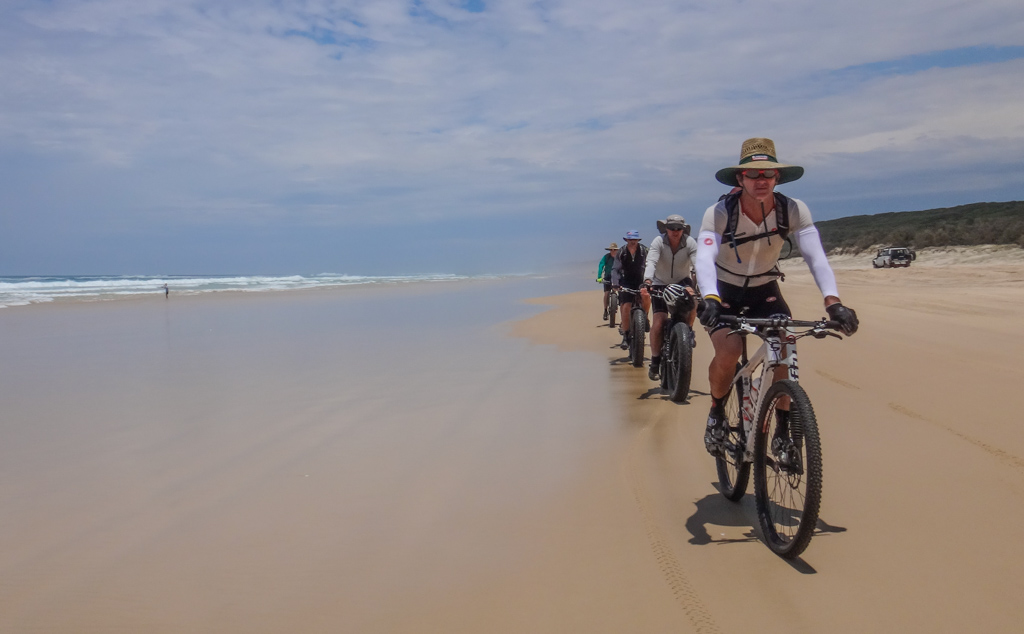 We took a more sedate pace, and kept to the waterline out of the way of the cars. 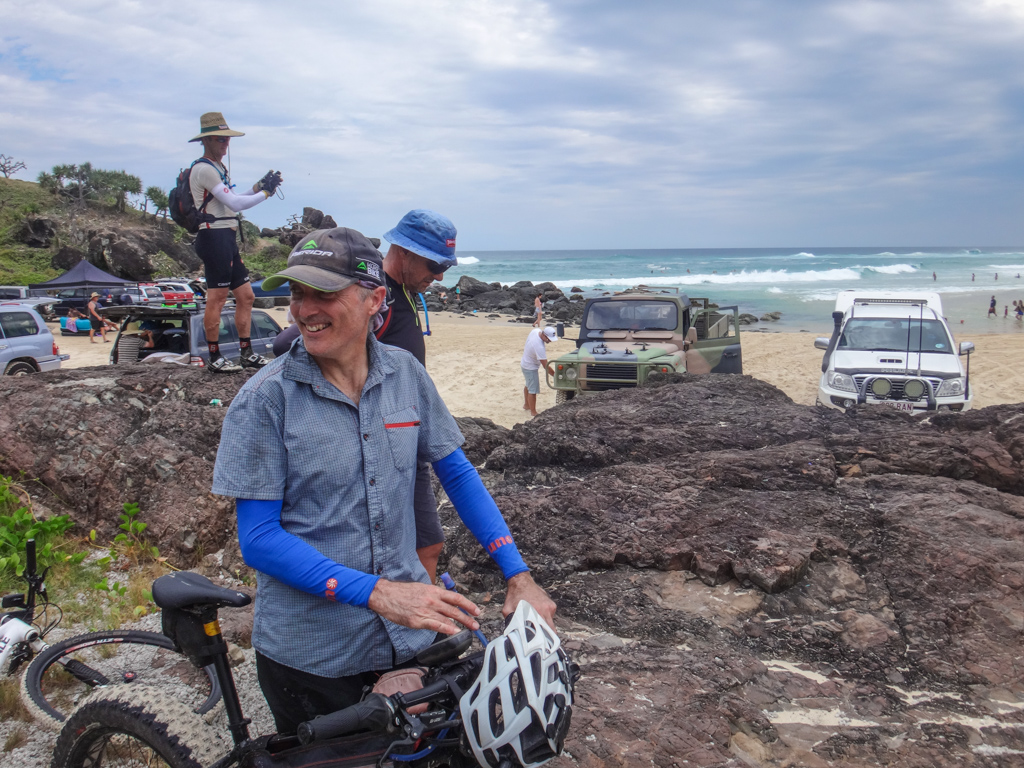 At Double Island Point the vehicles ran out of beach and stopped.

We took a quick break, but kept on riding up the track to the lighthouse. 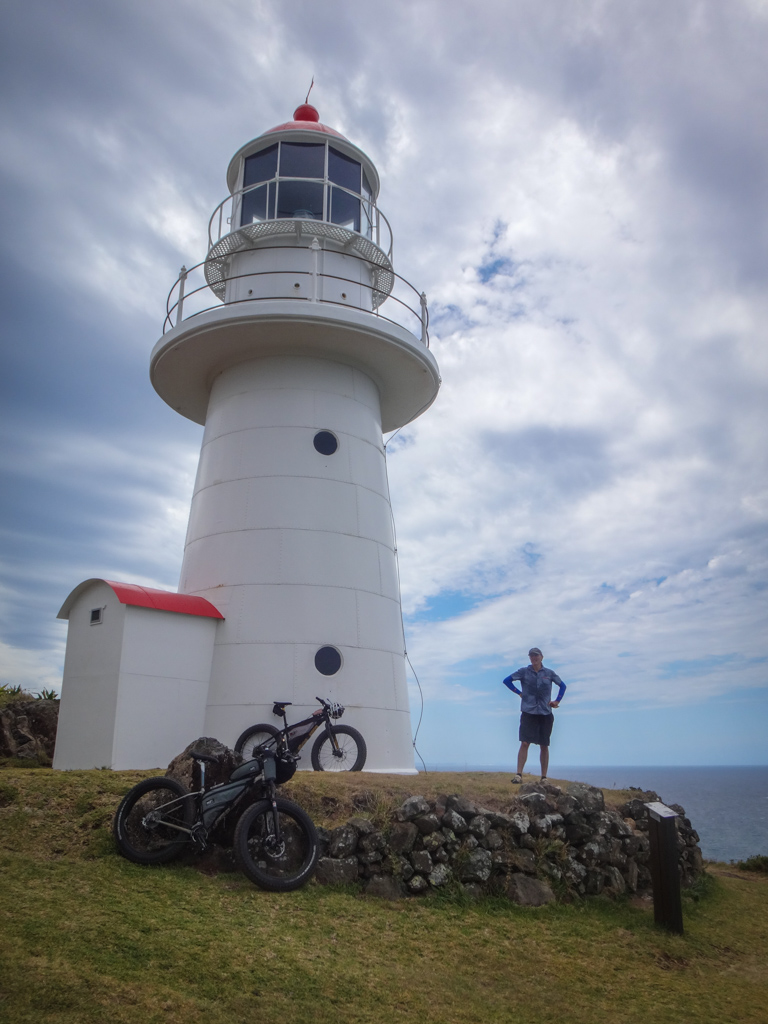 It’s a long steep climb, but we were able to ride it all.

Normally when you ride a bike up a steep hill, the tyres eventually lose their grip and start spinning.  Then you have to get off and push.

But with a fat bike, the huge tyres don’t lose their grip.  They bite into the soft steep terrain.  So the only things that give out are your legs.  I was determined not to give up and felt a sense of achievement when I finally made it to the top. 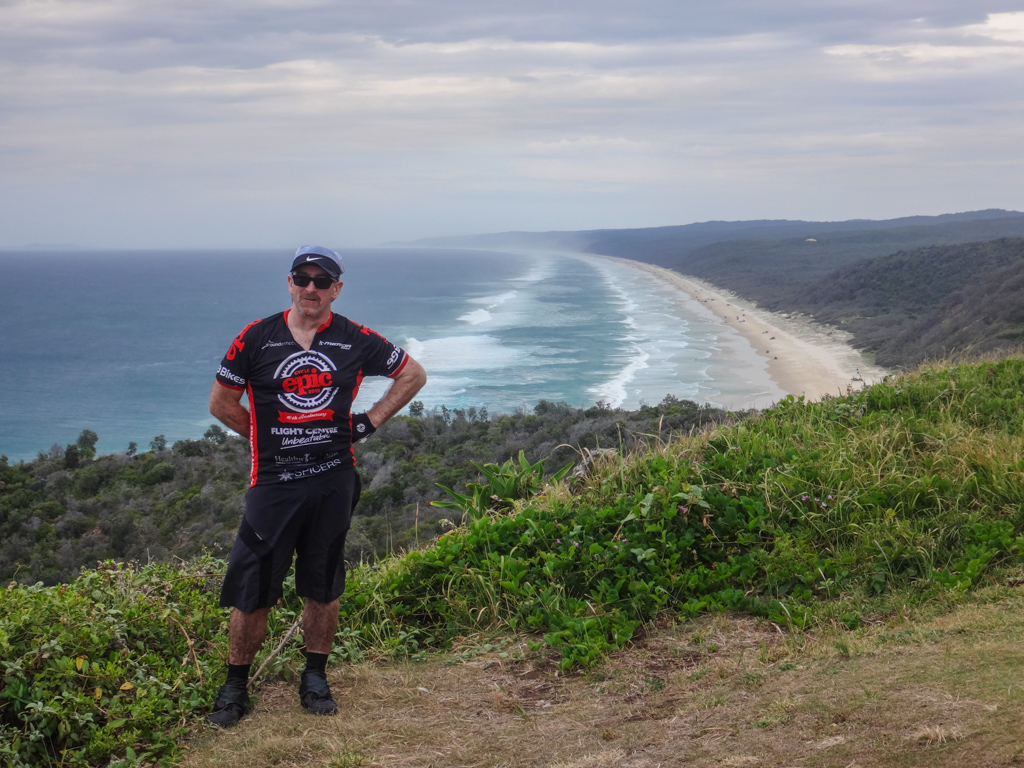 Below us, Teewah Beach stretched off into the distance towards Noosa, which was so far away it was below the horizon. 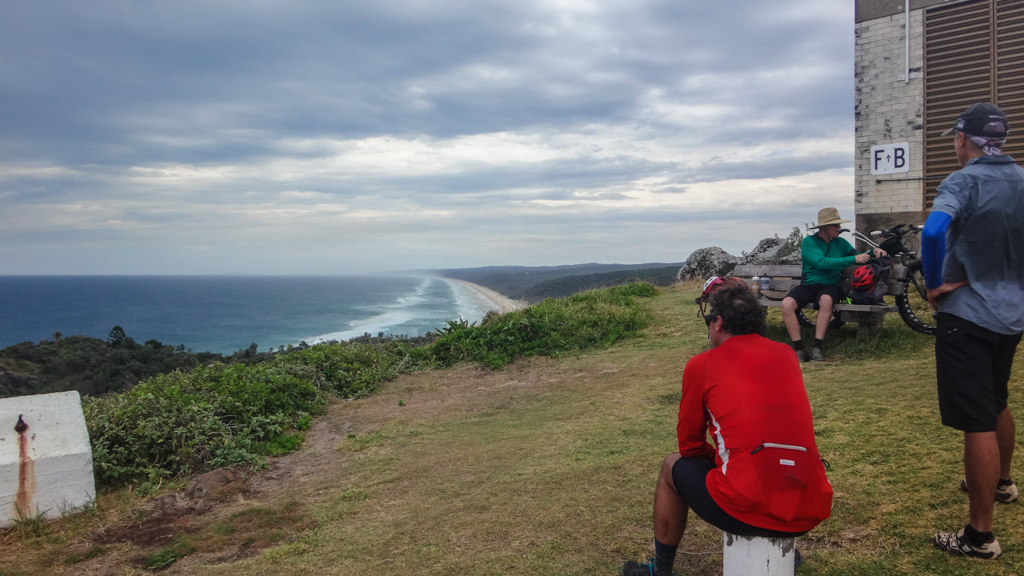 Another chance to rest and catch our breath. 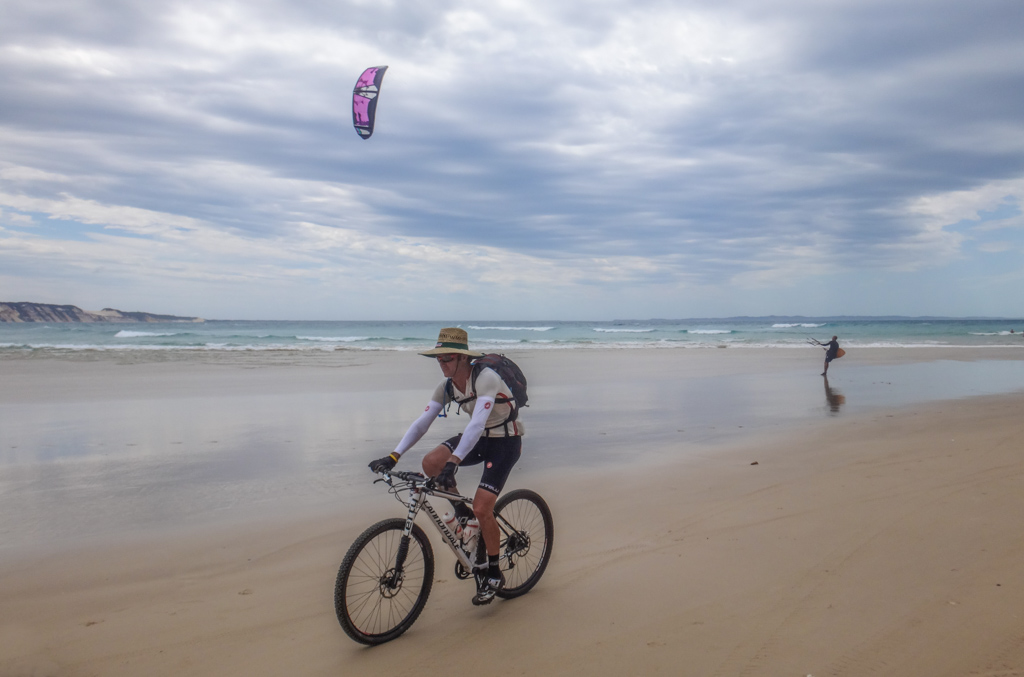 From the lighthouse we rolled down the other side of the point towards Honeymoon Bay.  Kite-surfers skidded across the waves, kids paddled in the water, mums and dads sat on the shoreline drinking cold beer. 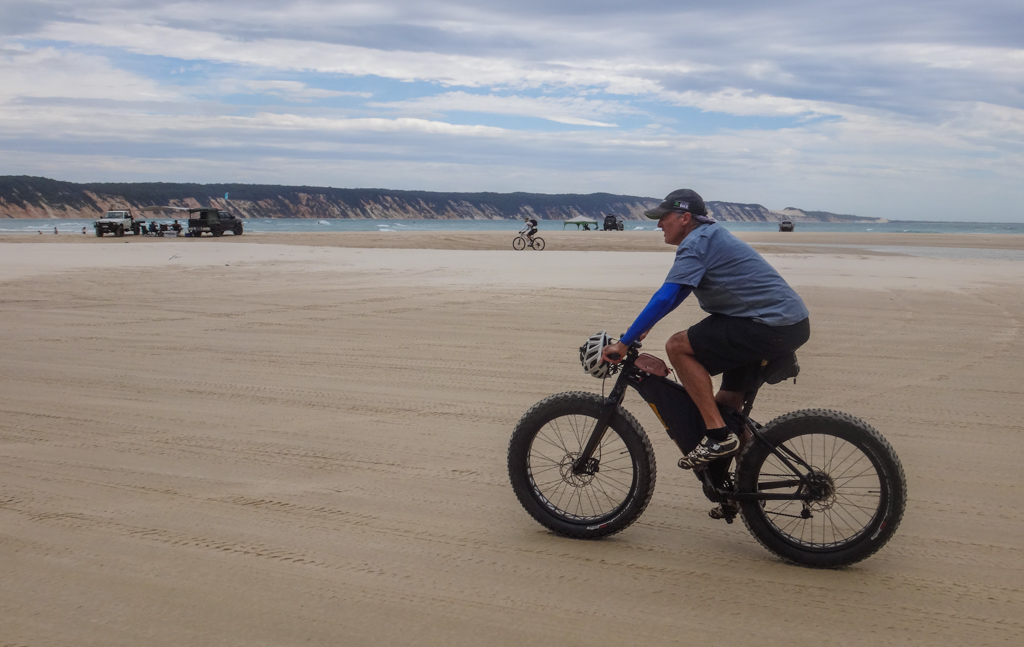 In the distance, the red and orange Rainbow cliffs stretched up the beach. 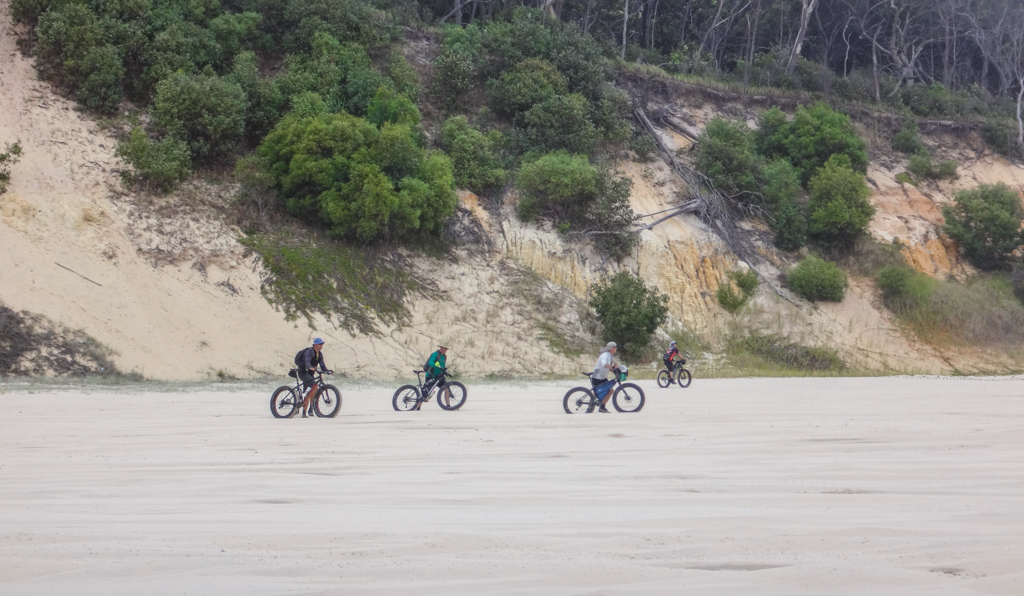 Honeymoon Bay is tricky because of the confusing lagoons that form in the sand at low tide.  It’s easy to get stranded and end up having to retrace your tracks.

We stuck to the foot of the cliffs to avoid any dead-ends.

The down-side of this strategy was that we eventually had to cross back to the waterline over soft sand, while keeping an eye out for vehicles speeding down the beach.

We made it intact. 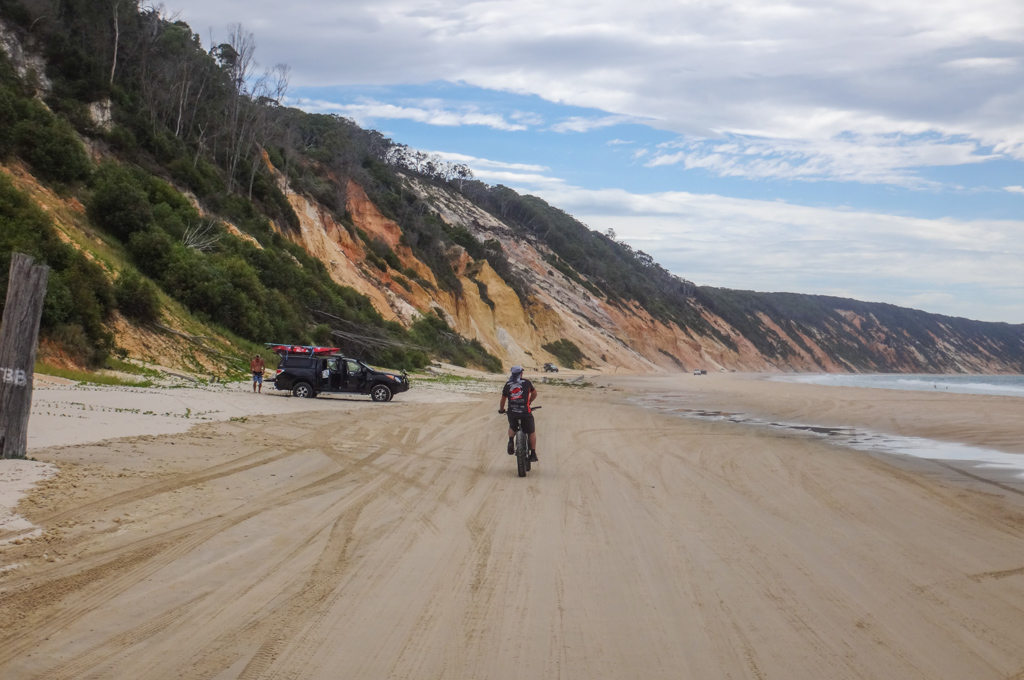 Those cliffs are amazing. 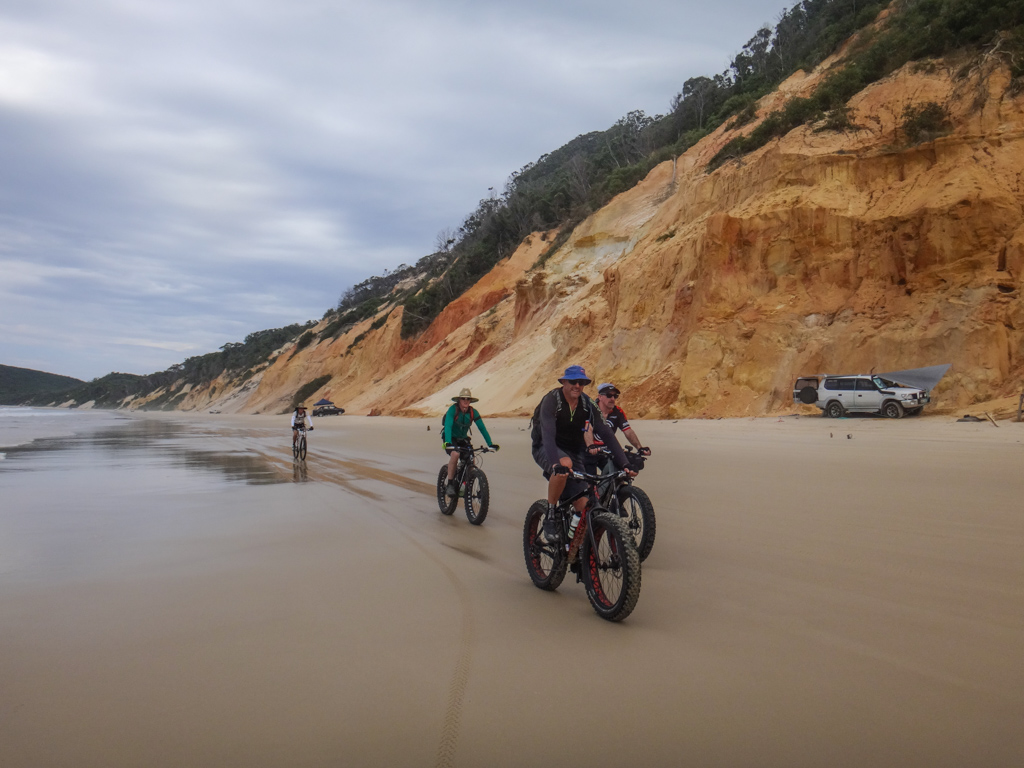 For any of my overseas friends, if you ever visit and would like to go for a ride, I’ll bring you here 🙂 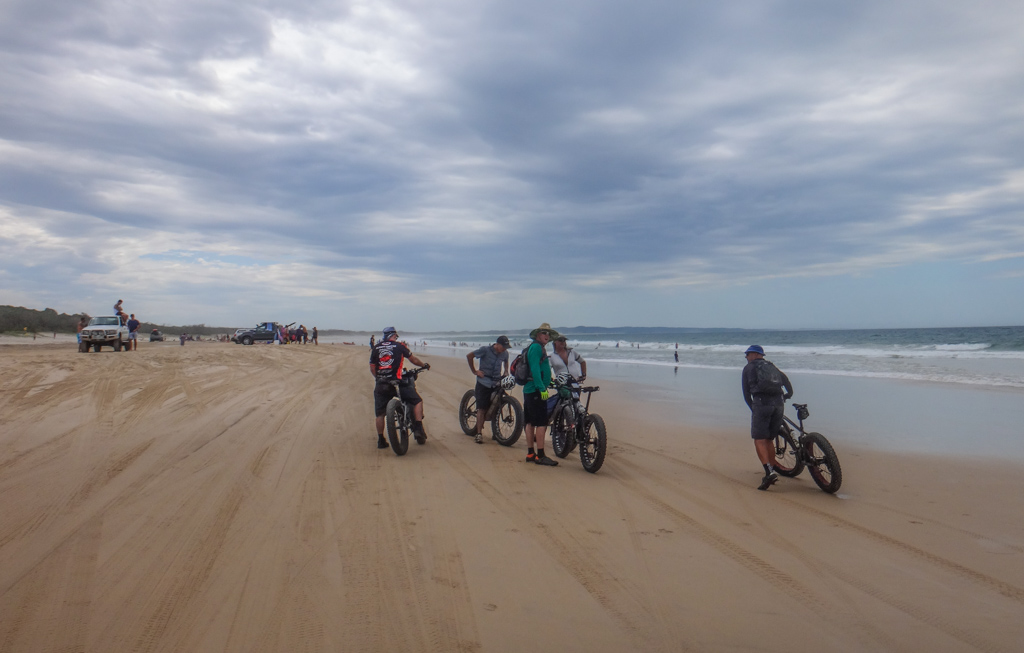 Like most good things, this ride eventually came to an end back at Rainbow Beach.

I joined my friends at the local pub for some cold drinks before they began the long drive back home. 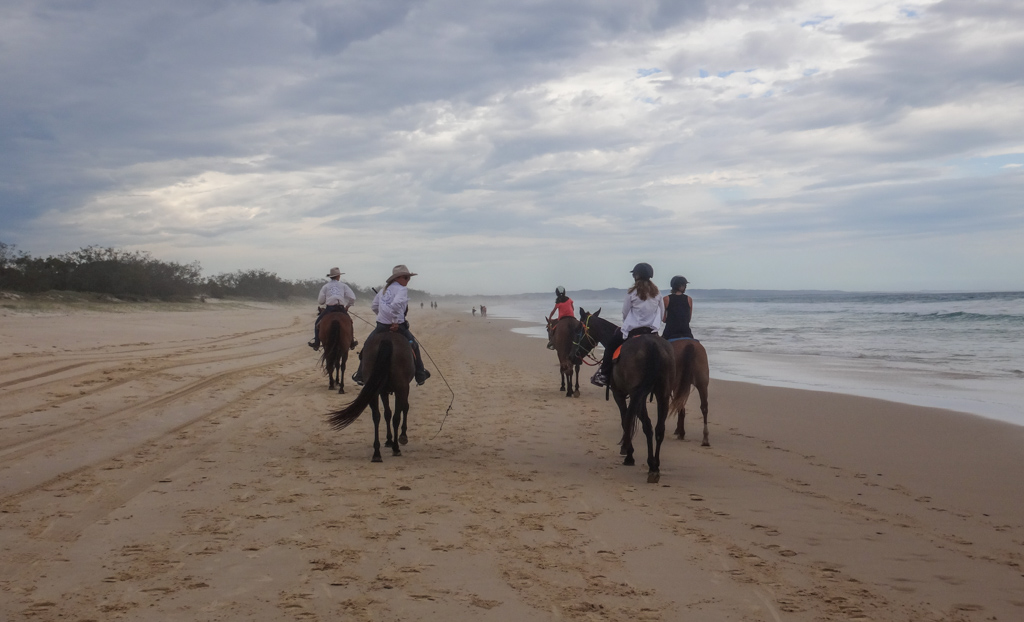 Since this was the last full-day of our holiday, I went back down to the beach and rode the last couple of kilometres back to our house.

Some horses were sauntering along the beach, so I took it slowly too, savouring the final stretch of beach. 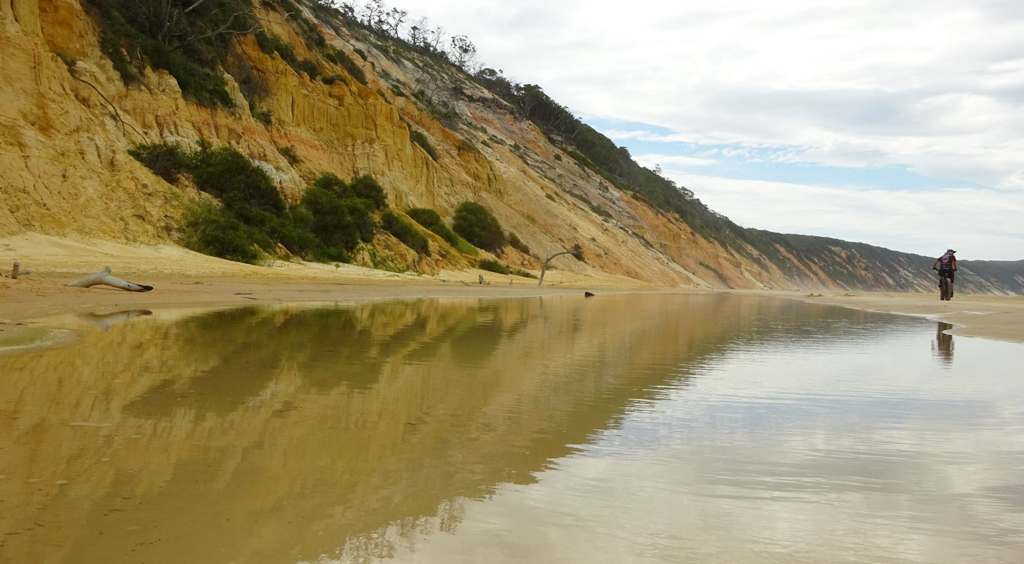 We rode just under 50km in about six and a half hours.

I’ll rate this one 8 out of 10 on the tough-o-meter.  Take plenty of water – especially in summer.

This is a much tougher ride if you do it in the opposite direction.

Thanks Darb, Paul, Jason, Adam, Wayne and Nick for sharing in a memorable day out.

4 Replies to “The Rainbow Loop”