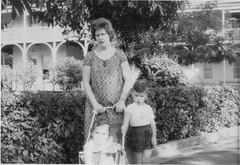 This is Sylvia (Mum), Karen and Neil (me) in the garden at Yungaba not long after we disembarked from Ellinis.

It was around this time that Karen and I caught chicken pox.

As a 23 year old mother of 3 in a new country, Mum can be forgiven for not smiling!

The next day we saw the coast of Australia it was quite an emotional experience for me. It looked absolutely awesome. We were nearly there! Out first stop was Adelaide, where we only walked around the docks for a short while. There wasn’t really a lot to see. Next stop Melbourne; there were hundreds of people waiting to greet the ship, mainly because a lot of the Greek passengers left the ship here. This was very emotional watching people waving to their families who were waiting for them. There wasn’t going to be any reception like that for us when we arrived in Brisbane.
Sydney was the last stop before Brisbane. We went ashore and caught a ferryboat to go to Taronga park zoo, unfortunately it was closed. So the only wildlife we saw that day was a mother duck with her babies waddling behind her walking across the road in front of us. That also was the day we lost photos Bruce had taken since we bought the camera. He was changing the spool of film and somehow came undone. So we have no photos of our journey, only a few that someone else had taken.

1 st May 1965 we arrived in Brisbane! There were lots of people to meet the ship, but none for us. Everyone was waving I was crying, and Bruce said just wave, pretend you can see someone”. We had actually arrived at the wheat wharf! We left the ship mid morning, and waited in a long line to have our documents checked. There were officials seated at tables in a big shed and in the corner of the shed at the back was all the grain. It was late in the afternoon when a bus arrived and took us all to Yungaba under the story bridge. There were 12 families that went to Yungaba, we were supposed to go to Wacol Hostel. However it was full, so this was just temporary whilst they made room for us. We were shown to the dining room where we were given salad bread & butter and a cup of tea. We were then shown to our accommodation. The men & boys were in a dormitory that already had single men staying there. The women and small children were shown to another dormitory on the first floor. By this time we were all very tired it had been a long and emotional day. The room had irone framed bunk beds. They all had rolled up mattresses with clean linen & pillows. We had to make these beds up before we could put the children & our selves to bed. There were no facilities to make a cup of tea, in the bathroom there was a wash hand basin 2 toilets & 2 showers. It was about 7 pm some of the men came to the dorm to sit with their wives and children before retiring. There was a large table at the end of the room with a few chairs. We were told later by the matron that men were not allowed to be there! This whole situation was not good. We had all been through such a lot to get here, everyone was quite upset. Still tomorrow was another day. We had arrived on May Day holiday weekend so a lot of places were closed. Neil and Karen were both ill with chicken pox, most of the children had it. It was very hard to look after sick children in those conditions. We had to let Karen stay in hospital for about a week because I was unable to give her the proper care she needed. Because of our situation we were moved to another room, which was in fact a cubicle! Everyone was complaining and not very happy. Bruce was the only one of the men that went and found a job after 3 days. It was at Paul’s milk factory.

I hope you don’t mind me disagreeing, Mum, but I think we might have gone to Fremantle first like most of the other ships. Adelaide would have probably been the second stop.

Here’s some more photos. Just click on the thumbnail for a larger copy. Have a look at the last one which we took last week, compared with the same view in 1965, 43 years earlier.