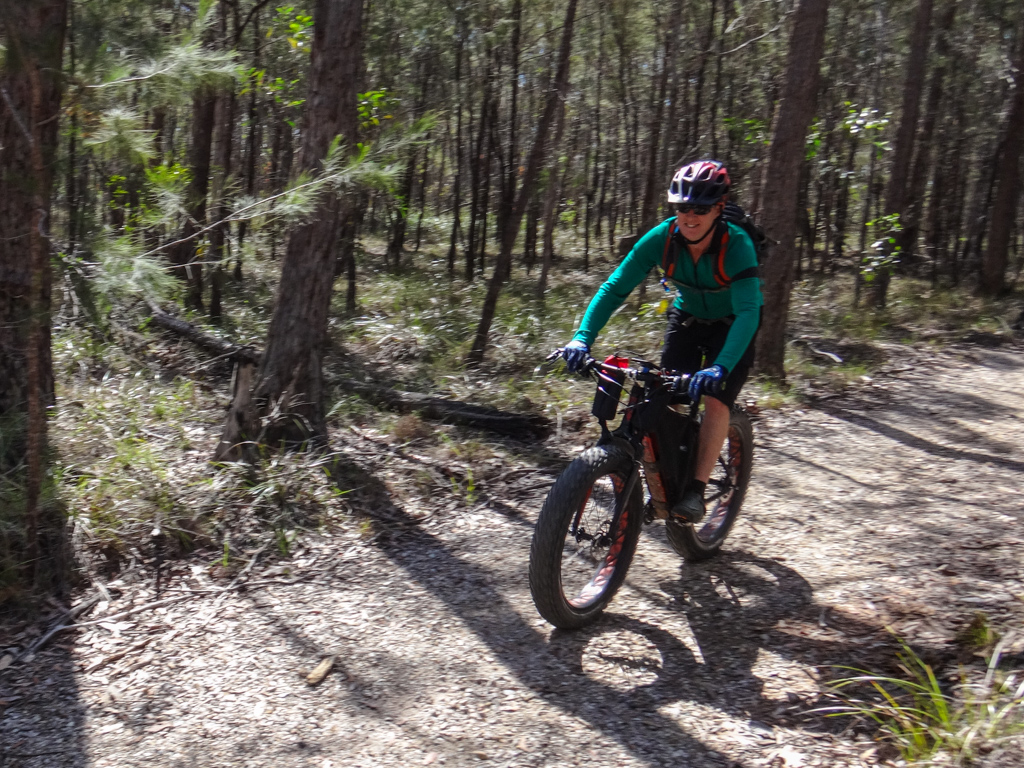 My friend Adam offered to show us around some of his favourite local tracks, which gave me the chance to relax and follow everyone else for the day. 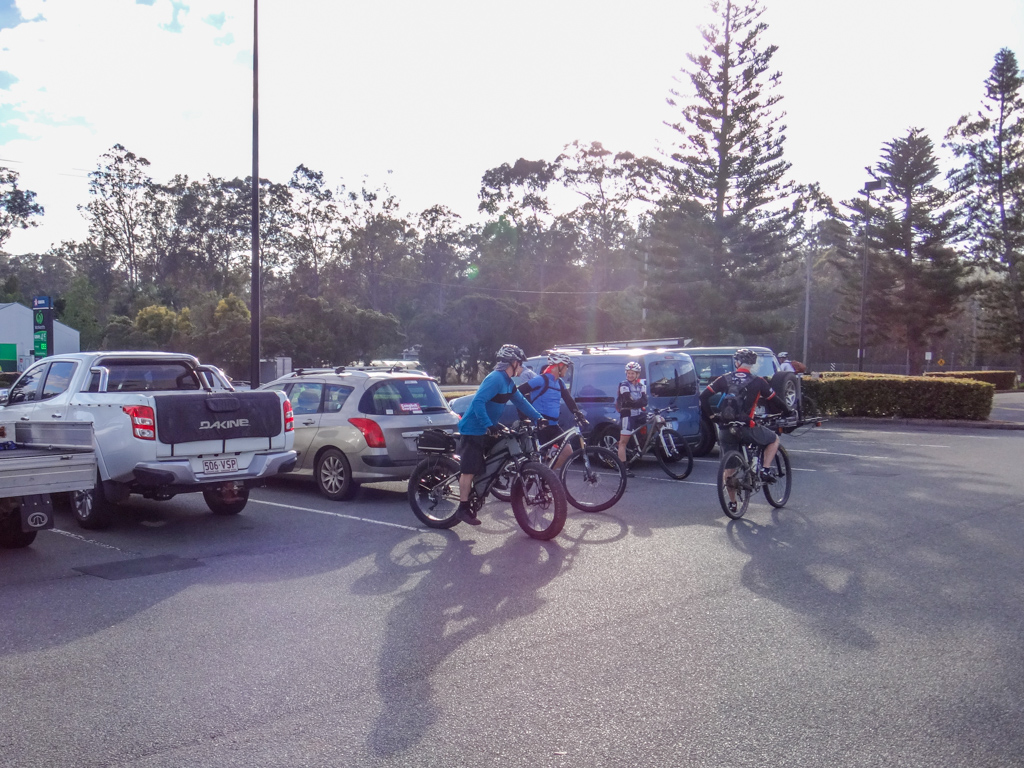 Cornubia is on the south side of the city.  We met in the local shopping centre car park before rolling off through some quiet back streets. 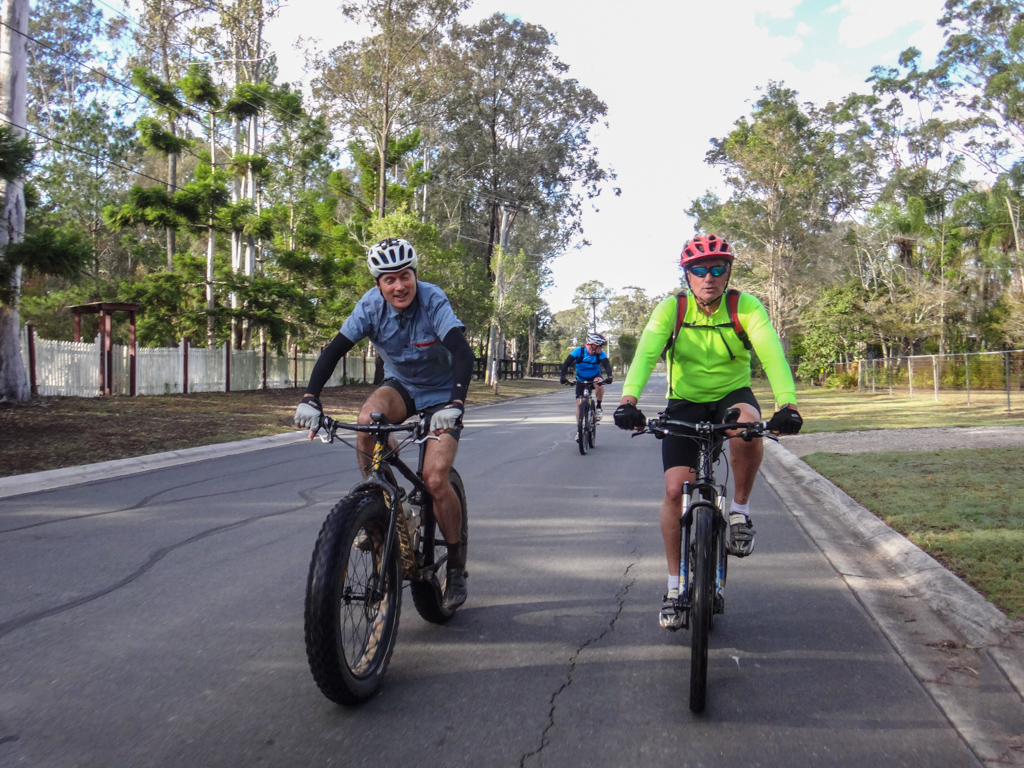 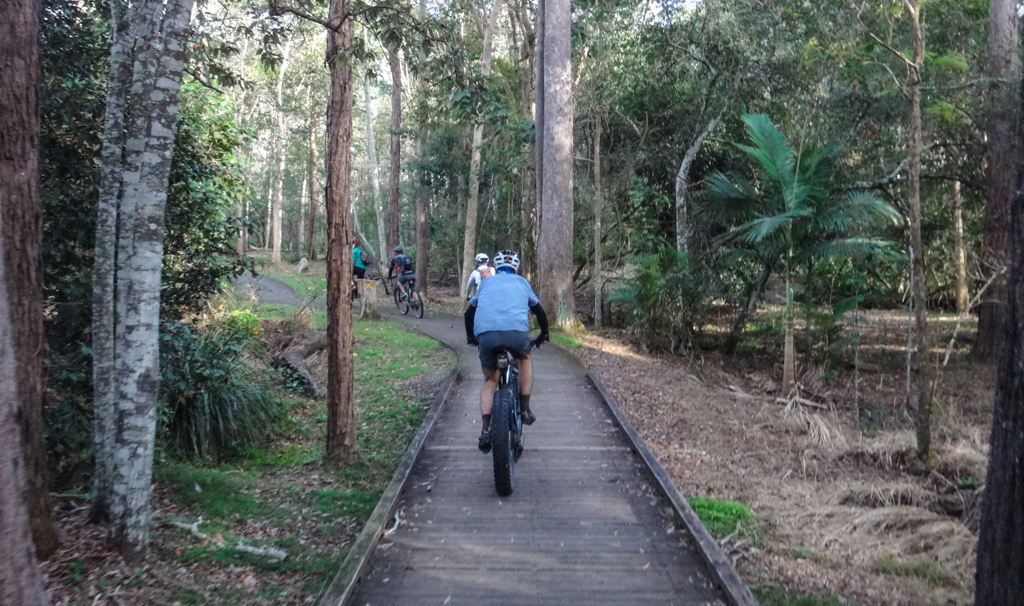 Adam had assured us that although we weren’t far from suburbia, most of today’s ride would be off-road.  After a few minutes we left the streets and followed a pleasant path into the trees. 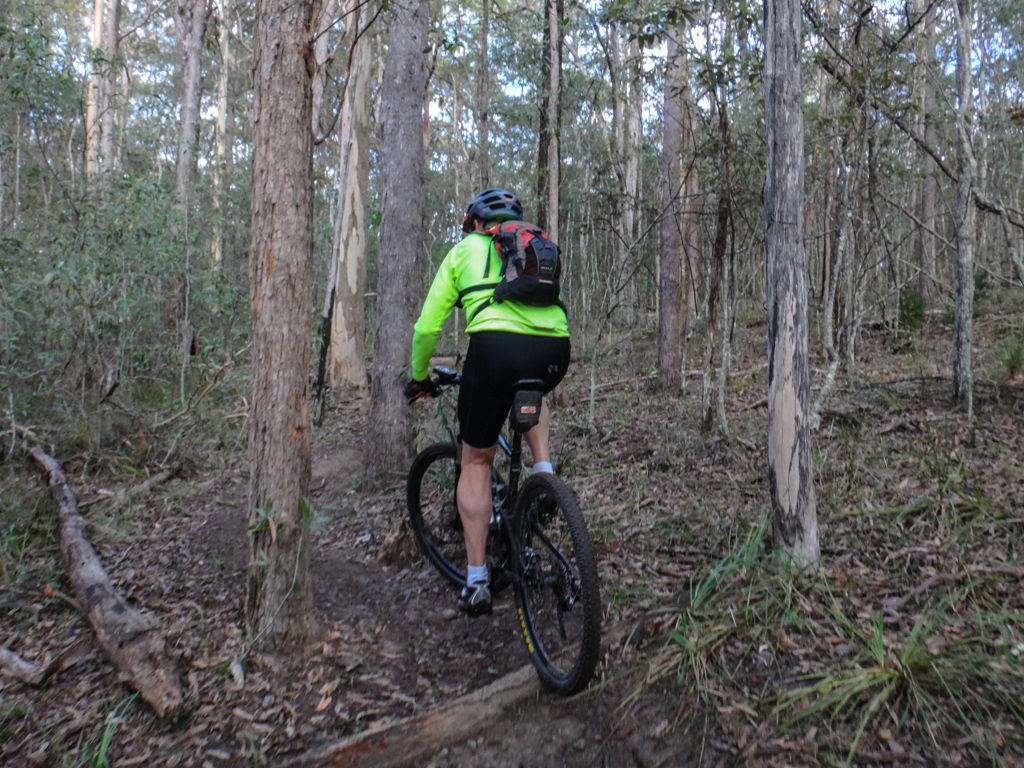 The smooth path ended at the entrance to Cornubia Forest.  A narrow single track twisted through close trees up the hill. 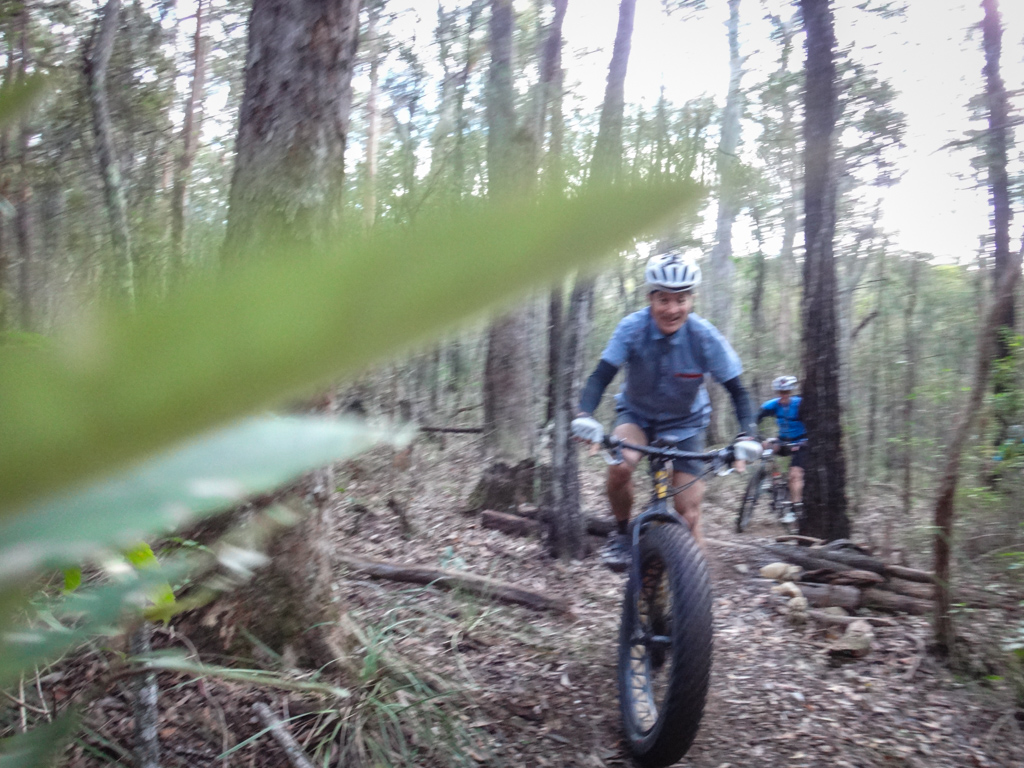 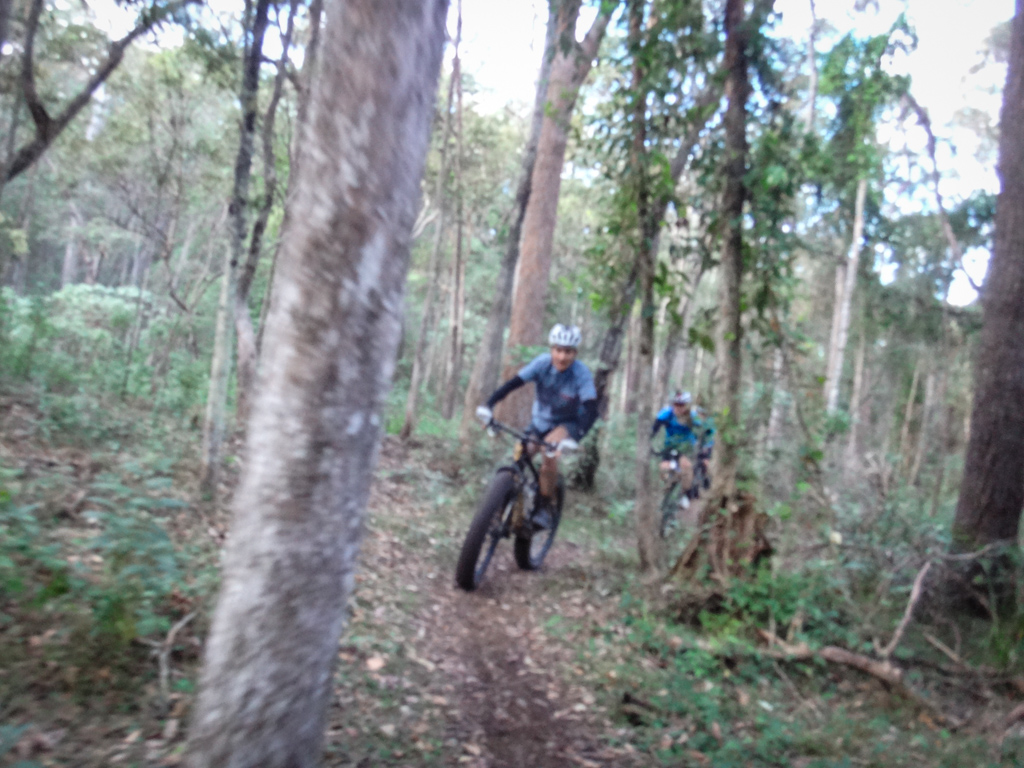 Single-track riding is fun but frantic.  The trails often have obstacles like fallen logs, rocks, dips and unexpected turns.  It’s a lot more energy-intensive than riding on gravel roads, and requires more concentration.  As we snaked up the hill at a brisk pace, I found it hard to keep up. 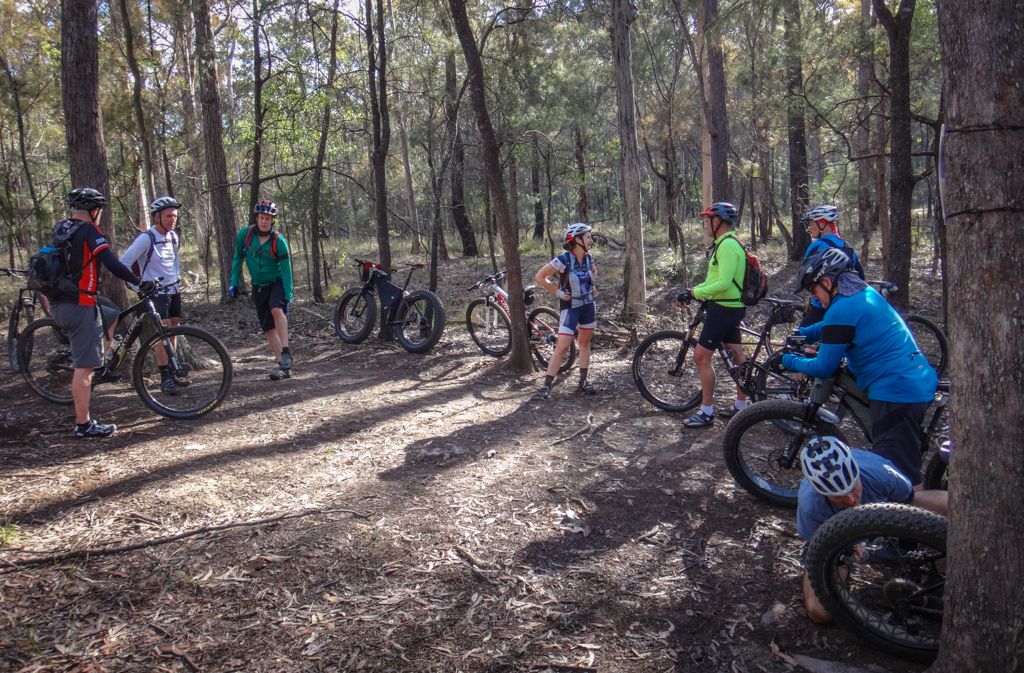 I felt secretly relieved when Nick got a puncture, giving me a few minutes to catch my breath.  I re-assured him, a little over-enthusiastically, “Take as long as you like, Nick!” 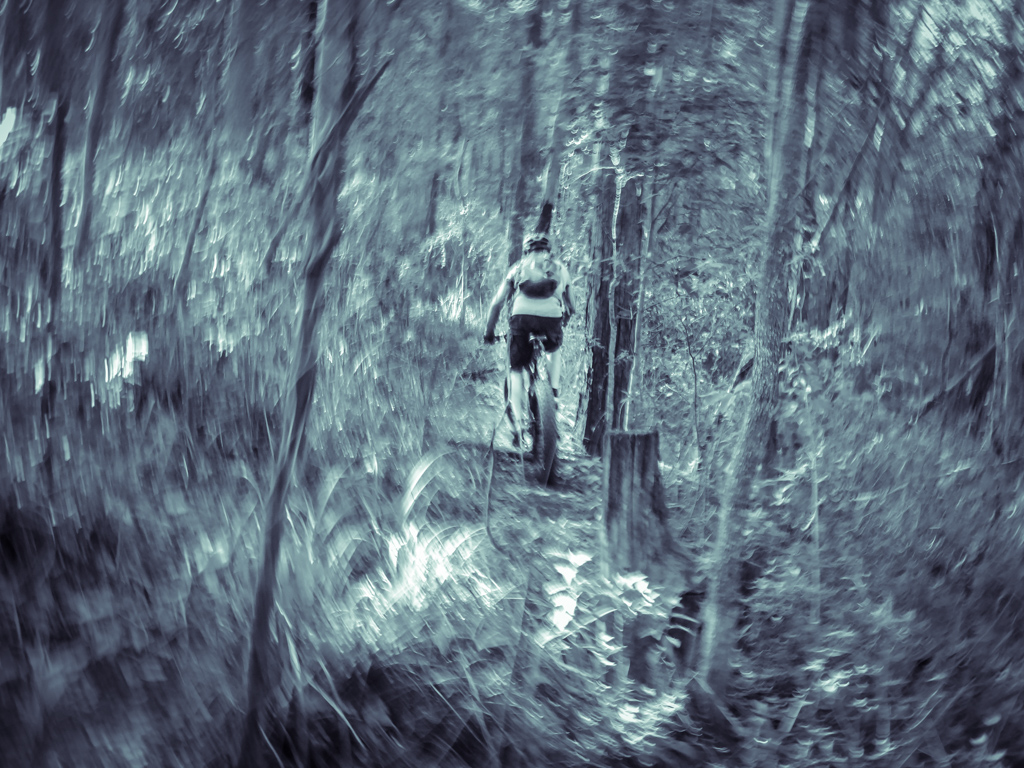 After the repairs, our frenzied convoy disappeared down an intense track called “Nirvana” at Daisy Hill.  I bounced over drop-offs and around tight bends.  My rear-view mirror hit a tree and smashed.  Although the track demanded total concentration, it was strangely enjoyable.  Everything else disappeared from my mind – my attention was totally focused on the track ahead.  Perhaps this is why they call the track “Nirvana” – a transcendent state with no sense of self.  In this instant, there was only the narrow ribbon of single-track in front of me. 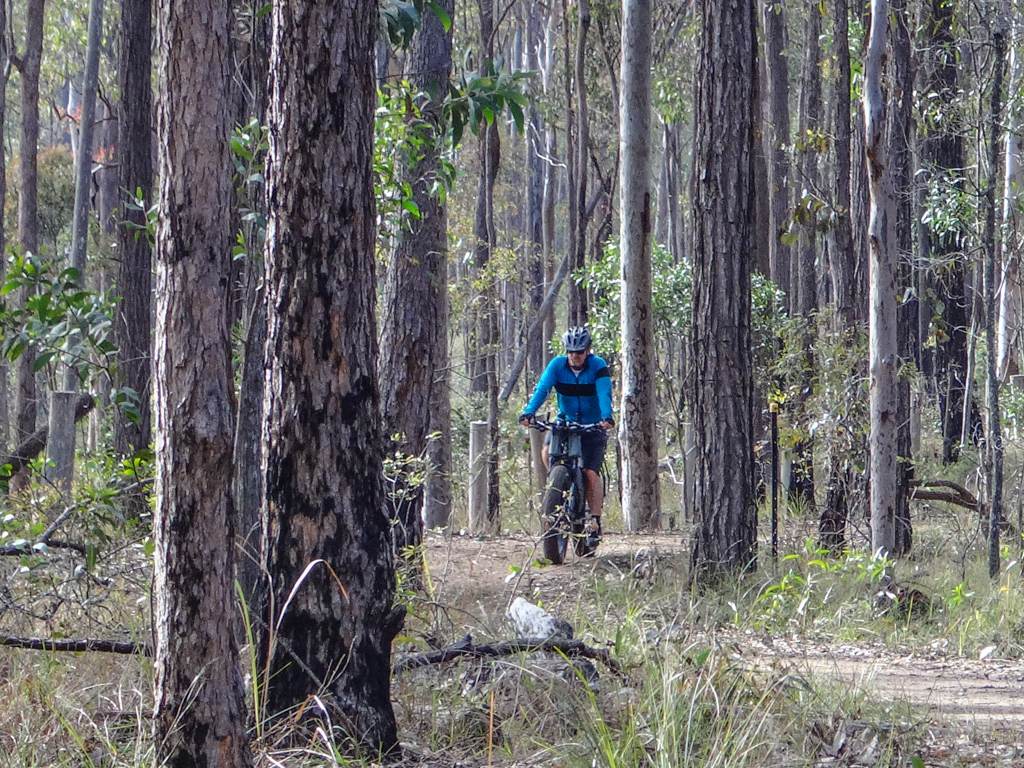 The single-track ejected us onto a serene fire road.  We slowly rolled to an anti-climatic stop and waited for everyone else to catch up. 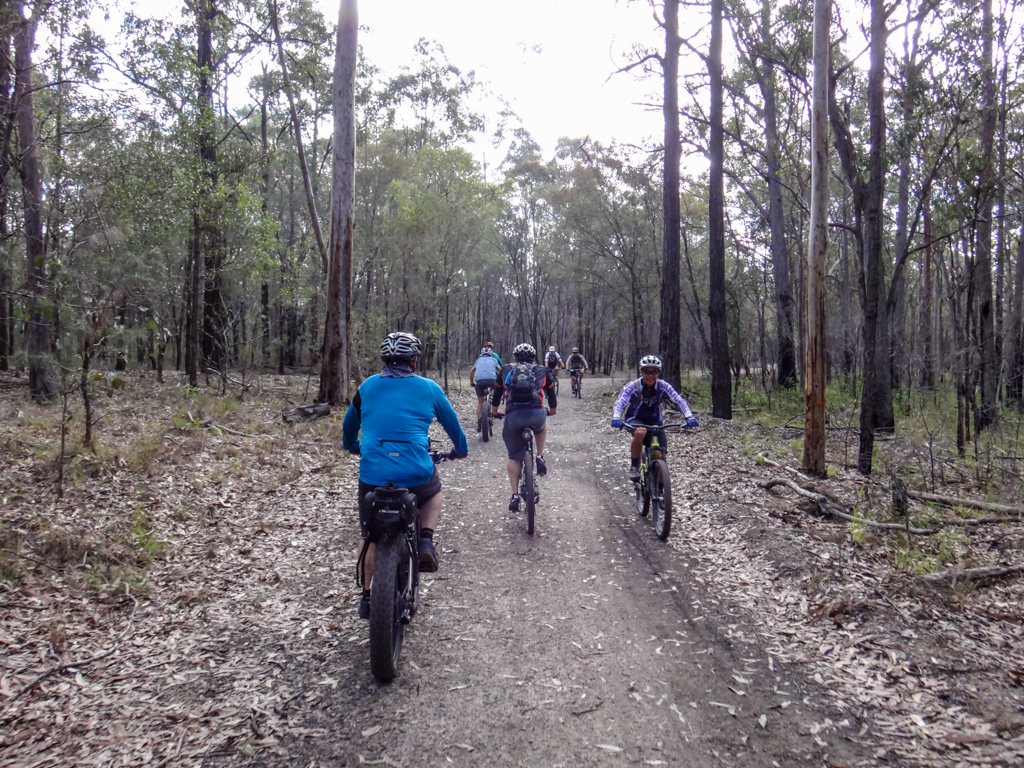 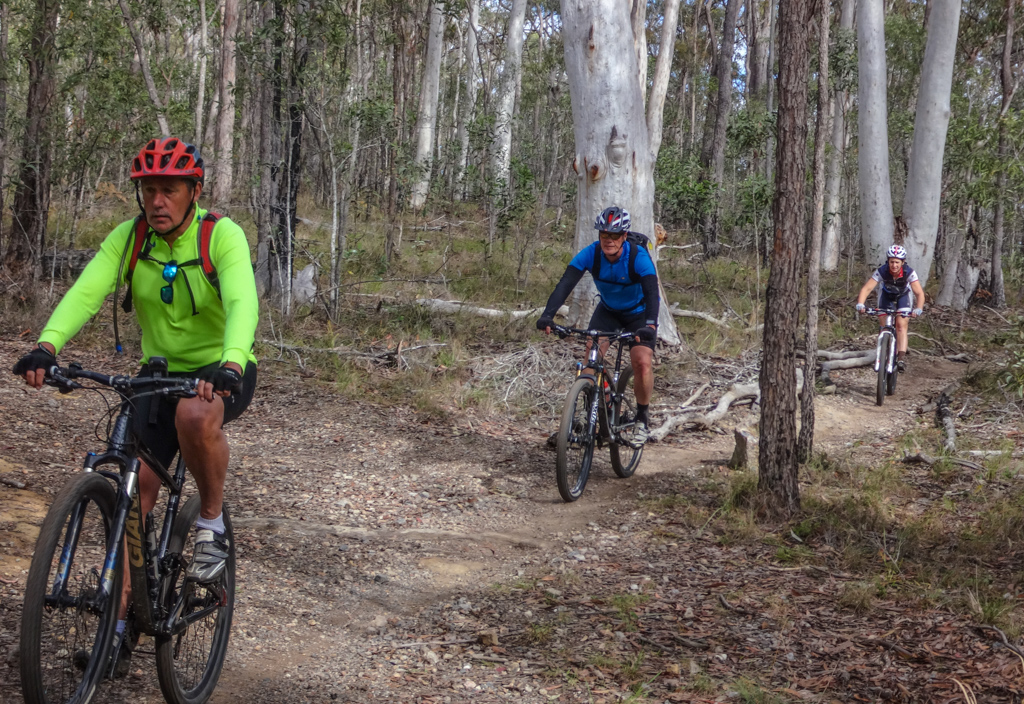 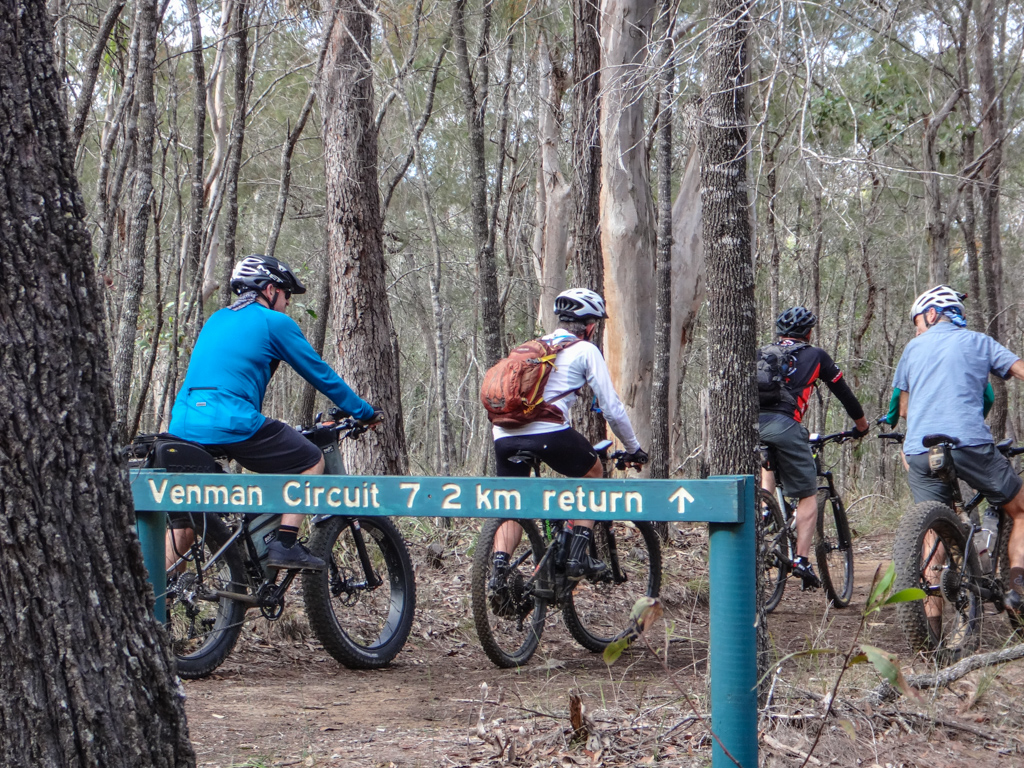 Daisy Hill is surrounded by a patchwork of nature reserves: Lawrie Reserve, Burnett Conservation Area, Cornubia, Mount Cotton…  They’re all linked by a series of trails with hardly any paved road between them.  We left Daisy Hill and followed Adam eastwards through some of these reserves. 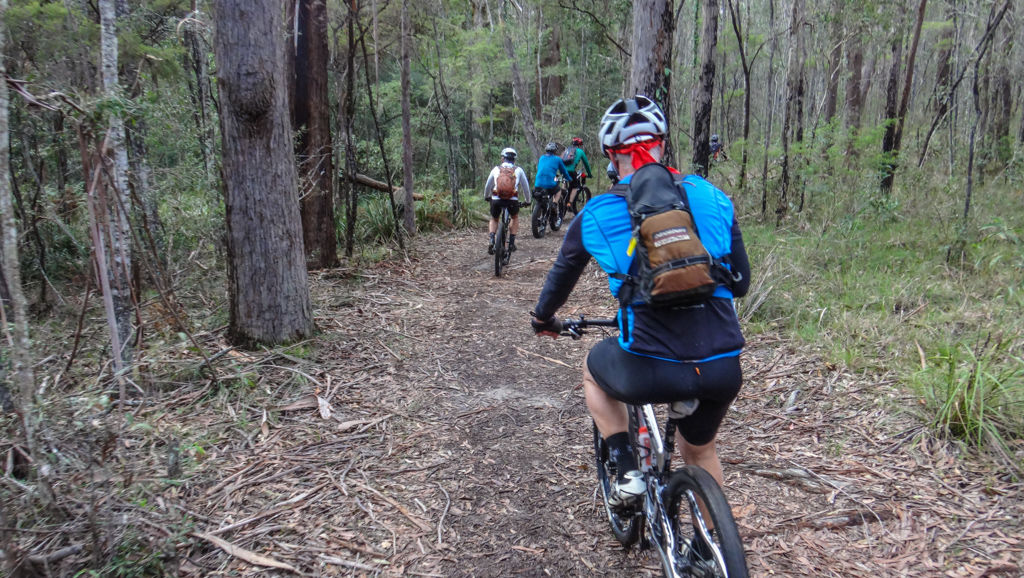 Adam told us he often does a mid-week ride along some of these tracks.  I think he’s lucky to live so close to such large parcels of forest. 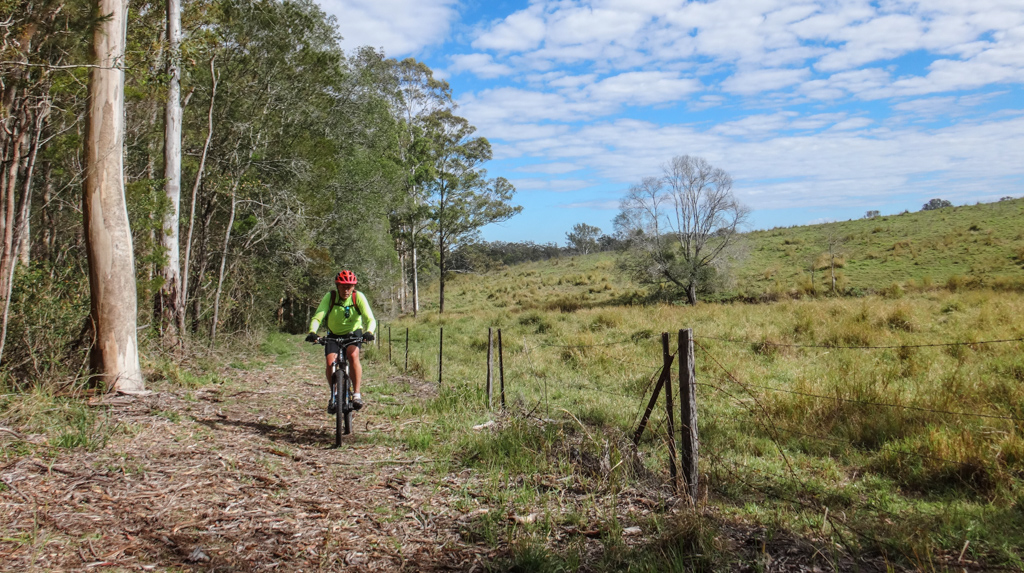 We eventually emerged from the forest and followed the fence-line east towards West Mount Cotton Road. 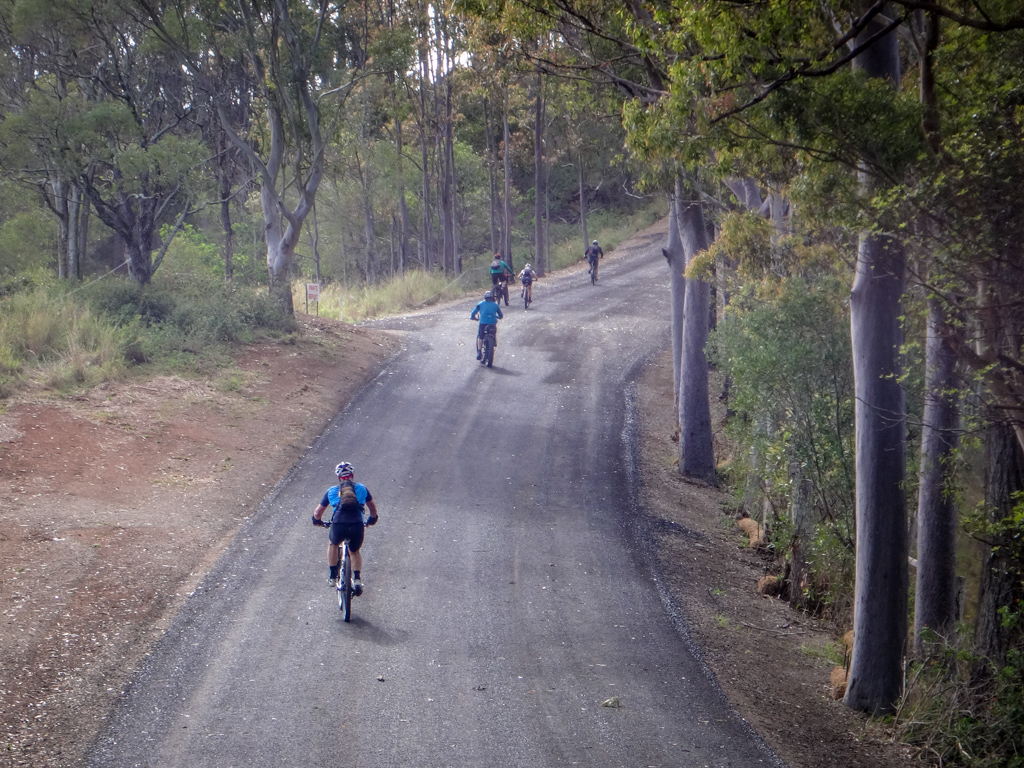 The track up the western side of Mount Cotton has recently been paved.  Five years ago my friend Derek brought us up here and challenged us to the “Granny Ring Challenge” having to ride up this hill when it was unpaved.  Only a couple of riders made it.  Today, even though it was paved, I still had to walk some of the way.

Darb tells me he rode the whole way.  He’s amazing. 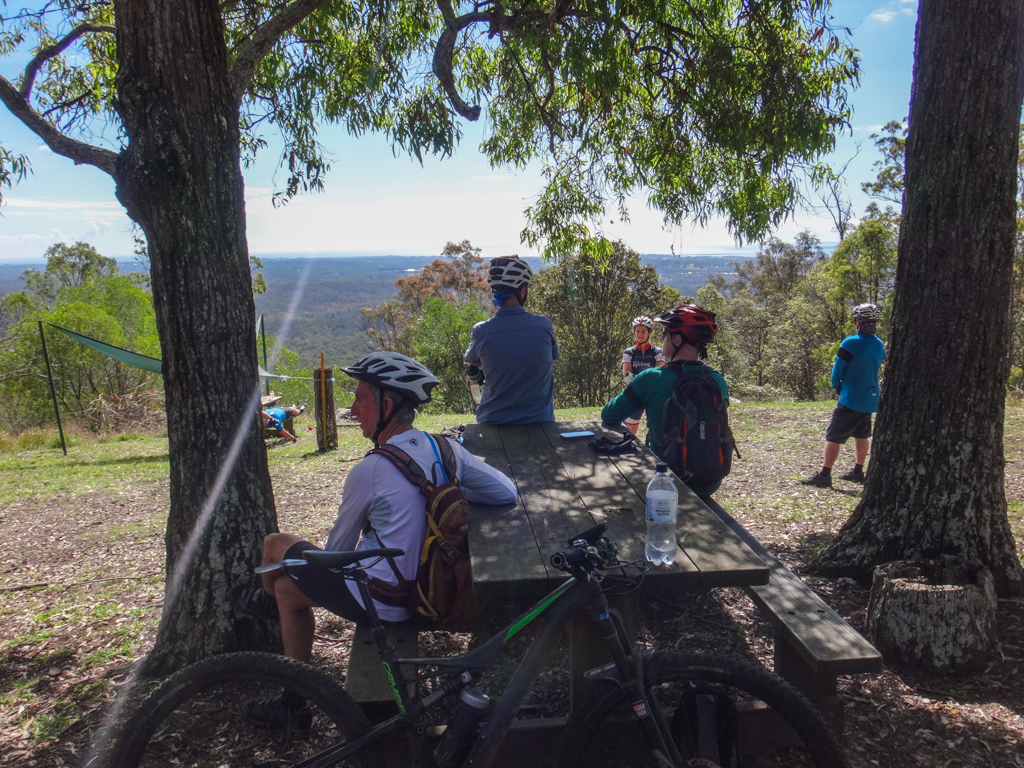 At the top, I reached to take a photo and couldn’t find my camera.  I assumed I had dropped it on the way up, so reluctantly decided to ride back down the hill, look for it, then ride back up.  Eric kindly agreed to go with me.  Two-thirds of the way down, Eric suggested I check my pockets again, and I sheepishly had to admit the camera had been there all along.  I hadn’t lost the camera after all.  I apologized profusely to Eric, but he just laughed and suggested I shouldn’t tell the other riders unless I wanted to inspire a few jokes.

We slowly rode back up. 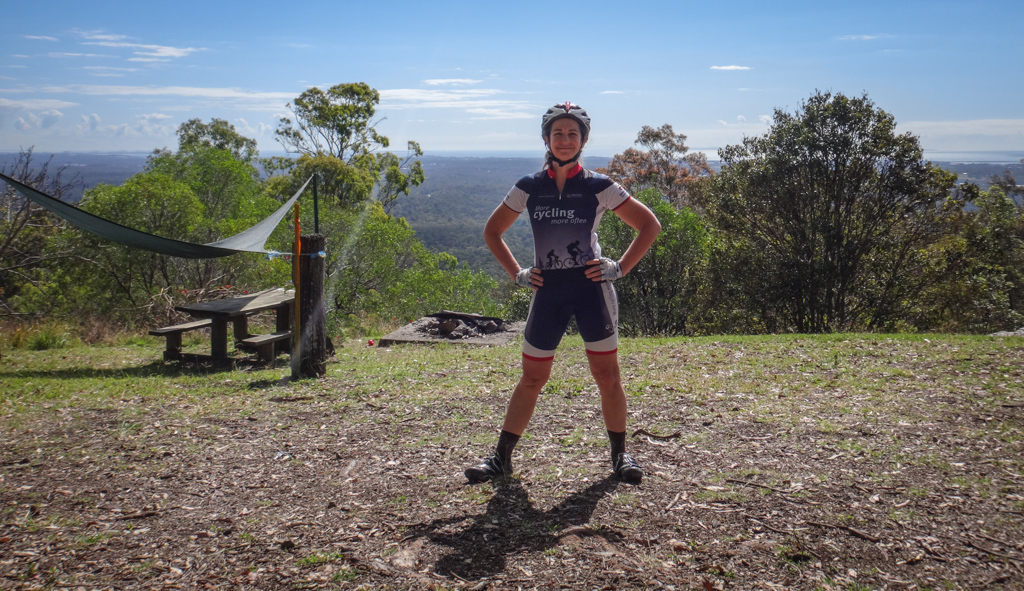 Mount Cotton stands about 230 metres above sea level and was named by the surveyor Robert Dixon in 1840 in honor of Major Sydney Cotton who was commandant of the Moreton Bay Penal Colony from 1837 to 1839.

We could see for miles in every direction from the summit. 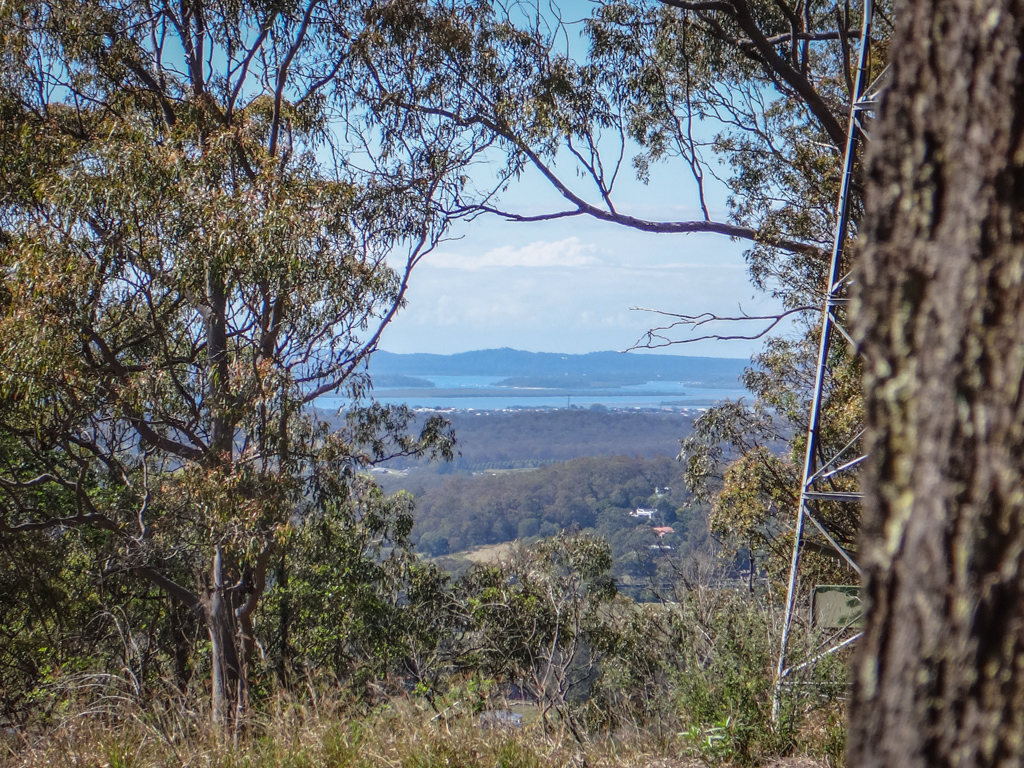 To the east we could see the Moreton Bay Islands with North Stradbroke Island on the horizon. 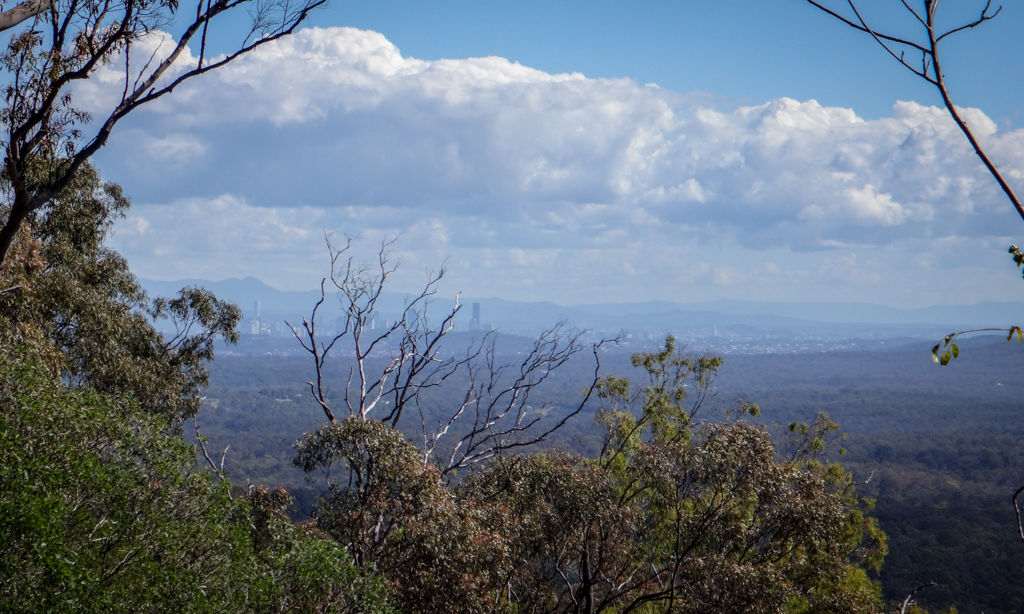 To the west we could see the towers of the Brisbane CBD with the D’Aguilar Range and Mount Samson behind. 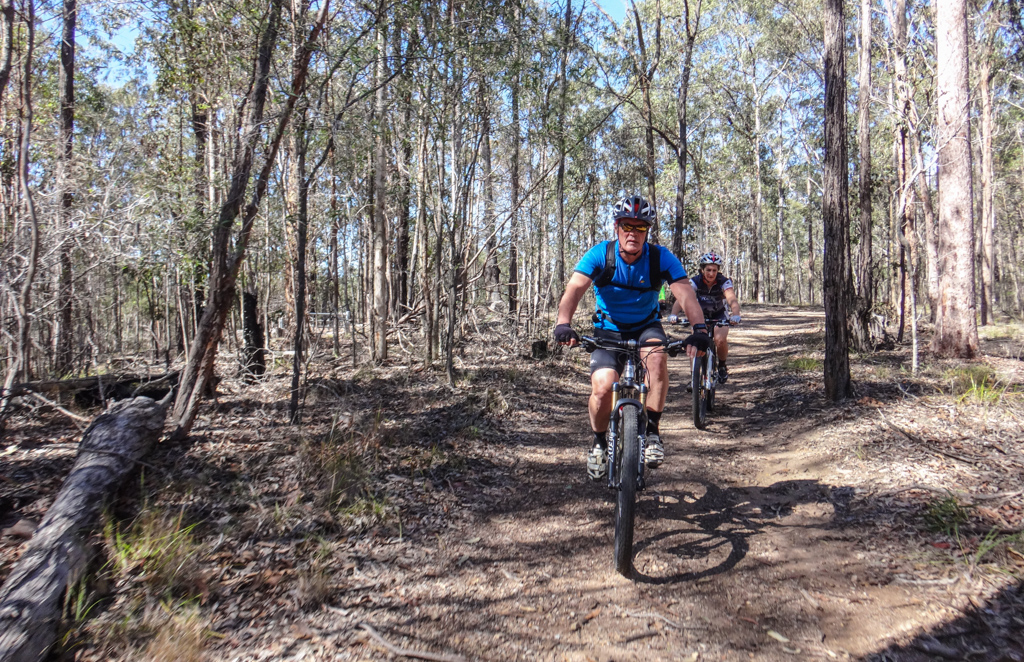 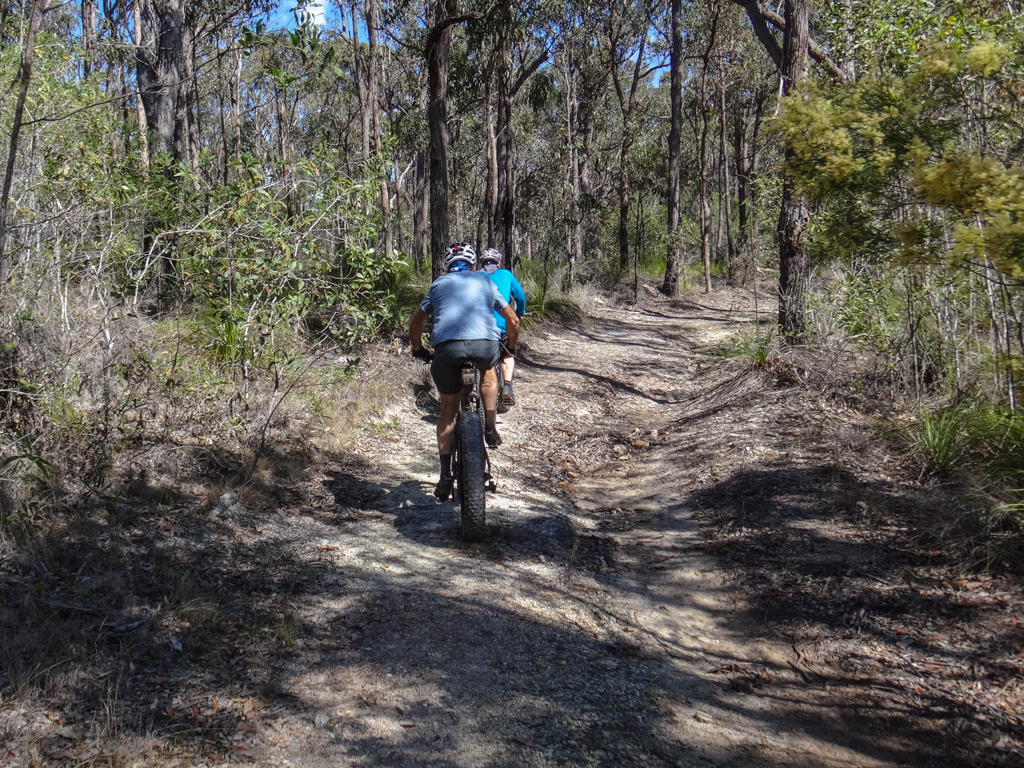 After a brief rest at the top we rolled down the northern side of Mount Cotton towards the Scout Camp at Karingal. 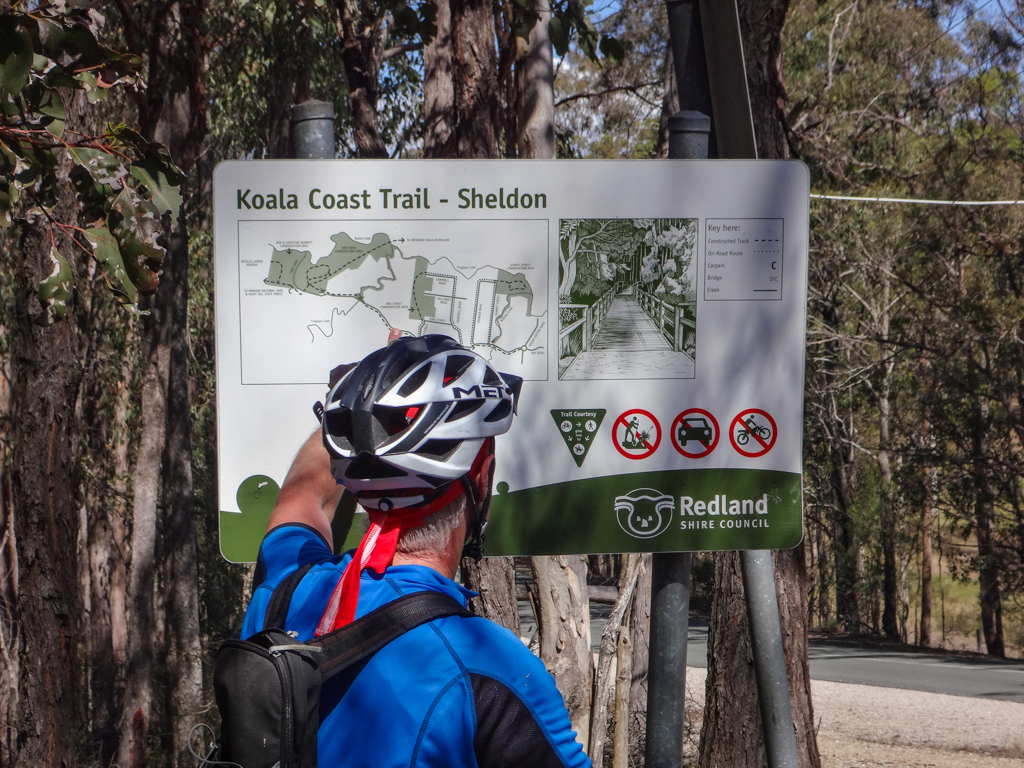 This area is known as the “Koala Coast”.  It includes bushland which stretches from Brisbane’s Eastern Suburbs all the way to Redland Bay and includes some of the most important Koala habitat in the country. 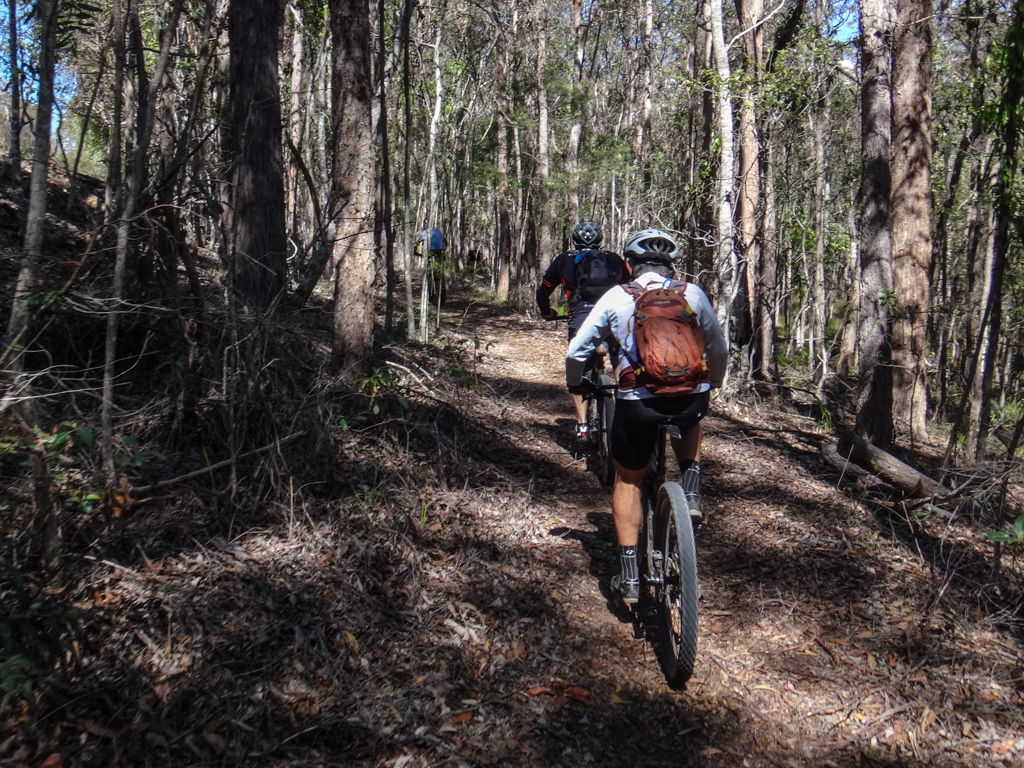 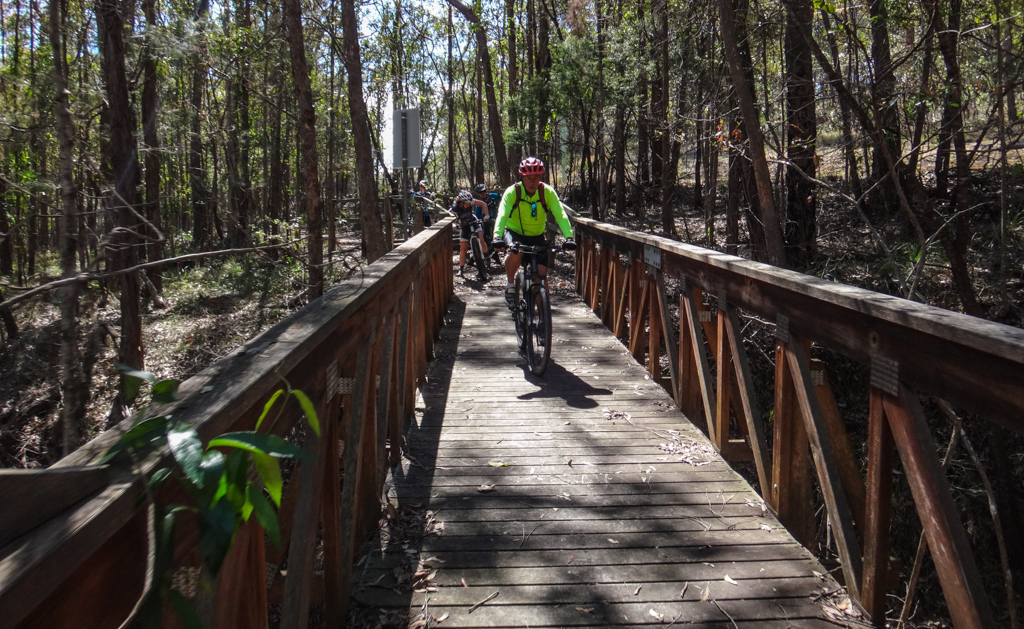 From here we were only about three kilometres from Daisy Hill.  We followed some quiet paths beside the road until we arrived back at the conservation park.  Adam had done a great job planning the course to avoid major roads. 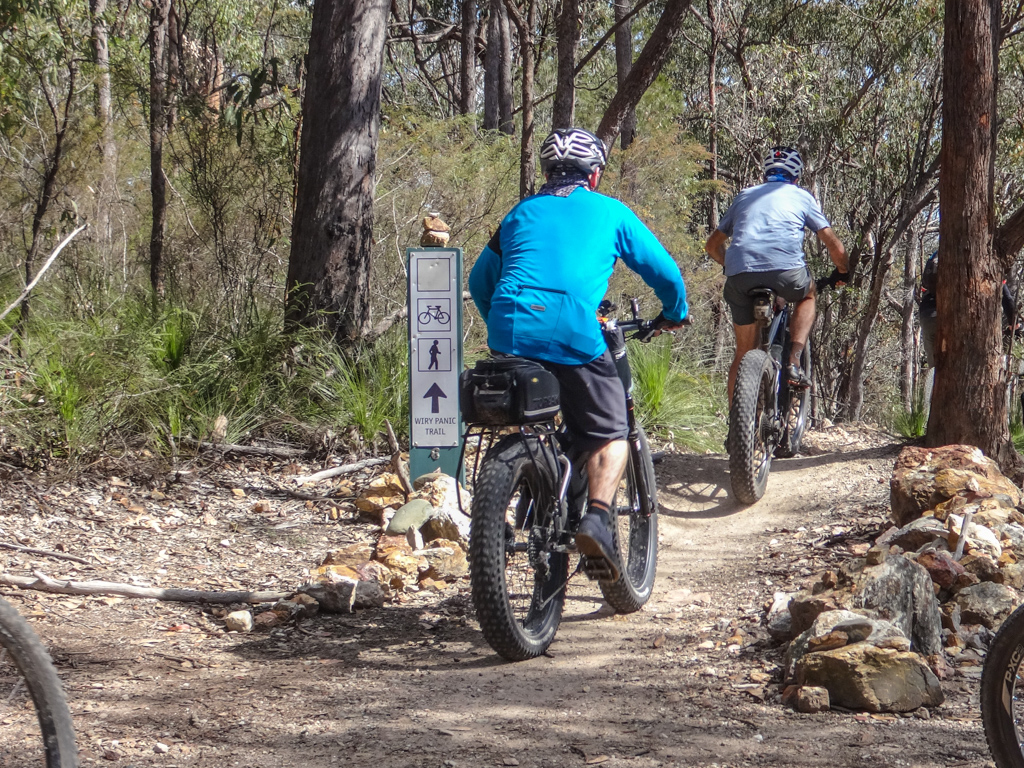 I was starting to tire.  Two trips up Mount Cotton had worn me out, and I was looking forward to lunch.  When we arrived back at Daisy Hill Adam pointed us down the “Wiry Panic” (aka “Stonehenge”) single track.  Despite my tiredness I couldn’t resist another roller-coaster ride down some of these well-made tracks.

From there we retraced our tracks back through Cornubia.  We had worked hard to climb up this hill earlier in the day, but now we rode it in the opposite direction enjoying the easy downhill slalom through the trees. 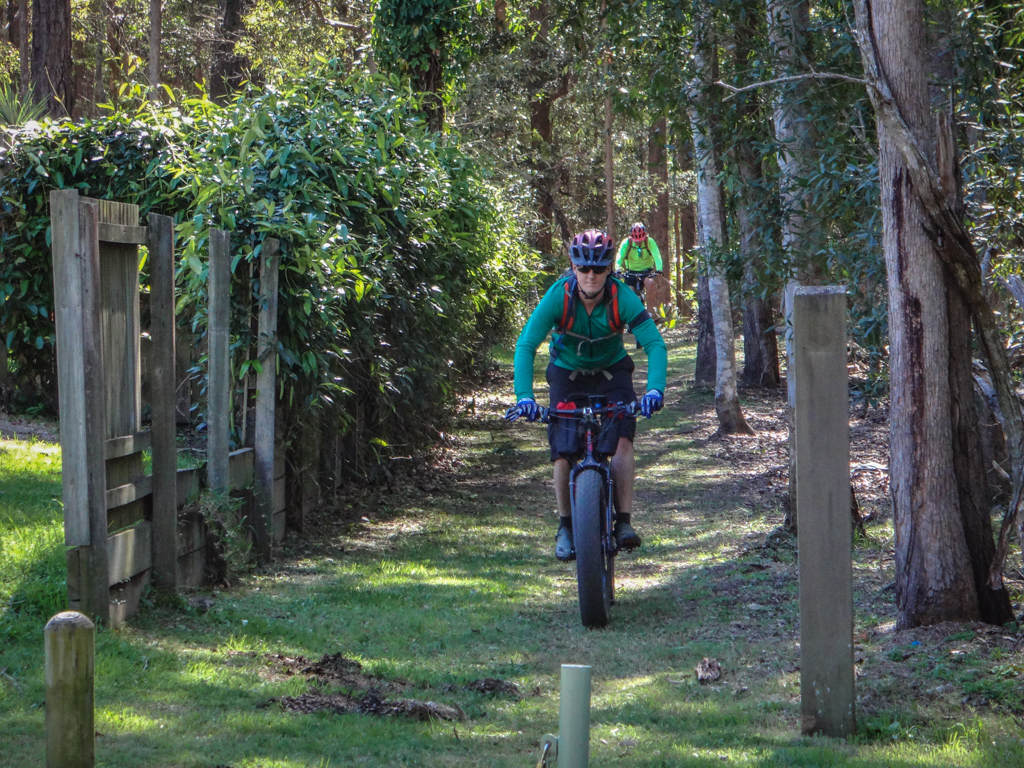 We emerged a few minutes later onto a quiet suburban street… 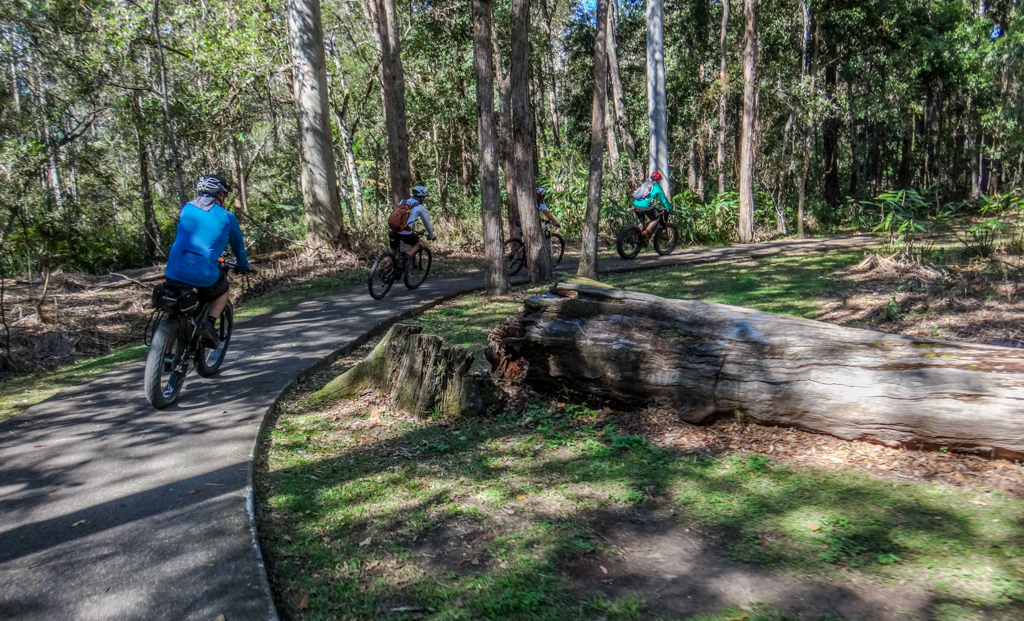 …and followed quiet bike paths back to the start.

We rode almost 50 km in just over five hours.  During that time I climbed about 1,050 metres in elevation and burned about 2,500 kcal.  I’ll rate this one 8.5 out of 10 on the tough-o-meter, but it would be more difficult in warm weather.

Thanks Adam for organizing an enjoyable ride, and thanks to Darb, Eric, Nick, Annick, Jason, Peter and  Mike for the fun company, and for not leaving me behind when I started to slow down.