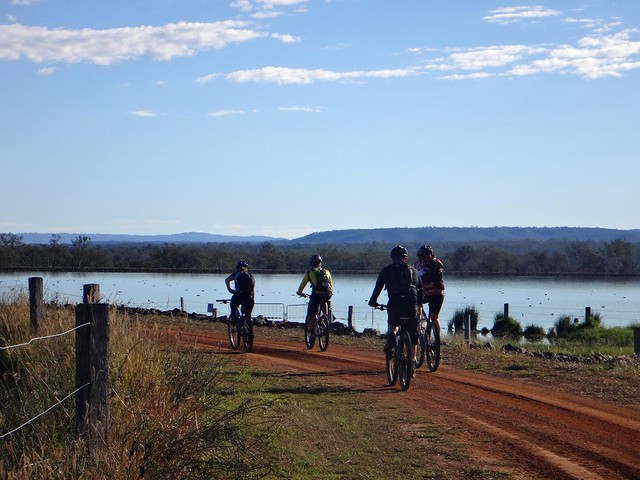 The aim of todays ride was to take a quick ride aound Vinegar Hill in Lockyer National Park near Adare, and then ride eastwards, looping through the Lockyer Valley to Coominya and back.

It didn’t quite work out as planned, and (as G.K. Chesterton would describe it) we had an “inconvenience” which ended up being an enjoyable adventure instead. 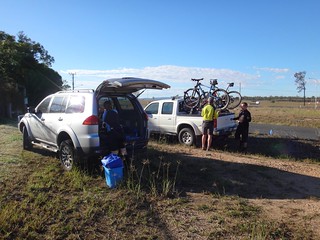 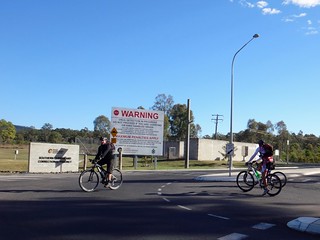 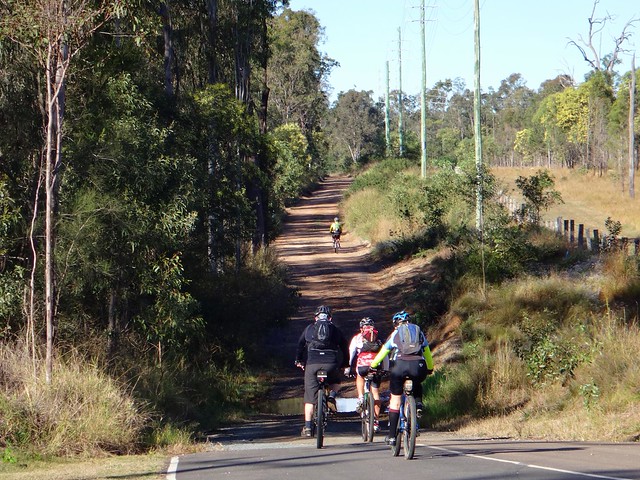 Spring Creek, north of Gatton, hosts a large Correctional Services precinct including farms and a prison. We started our ride near the prison, and set off hopefully into Lockyer State Forest. 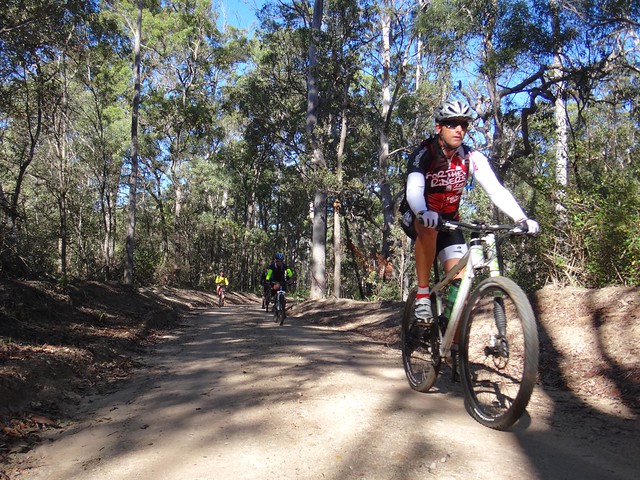 Darb and I have ridden through parts of Lockyer State Forest before, making our way westward up a long climb to Wallers Road. Today we wanted to explore the northern parts of the forest near Vinegar Hill instead. 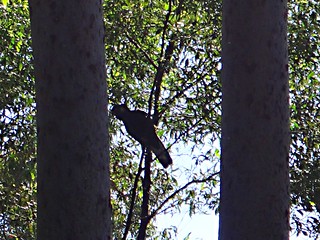 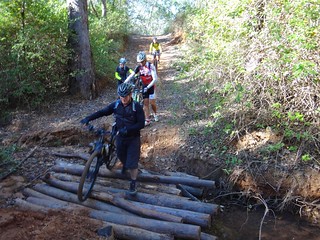 The flowing trails undulate through this pleasant part of the forest for most of the time, but there are one or two fun creek crossings where it’s important to take a bit of care. We decided to walk this log bridge although it looks like some of our motor cycling friends were able to ride through it without much effort 🙂 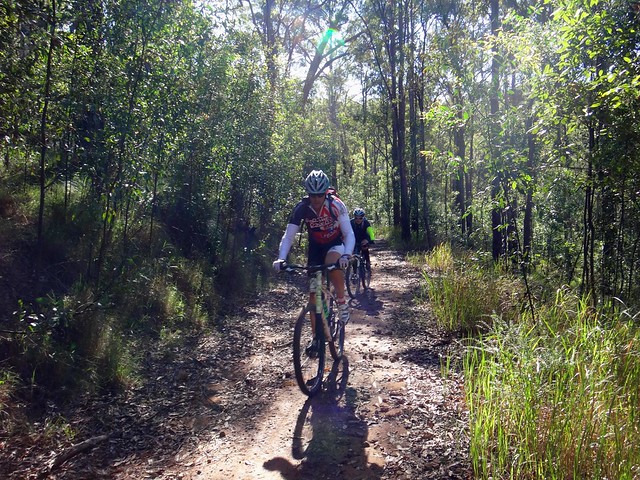 The route I had planned led off to the east following a track I’d seen on Google Earth. Unfortunately it was overgrown with Lantana and impossible to ride. So we optimistically decided to follow the main trail instead hoping it would bring us out at the right spot in the end… 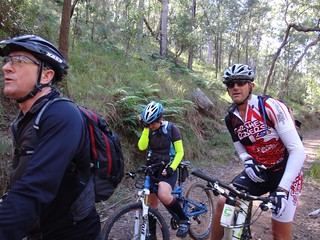 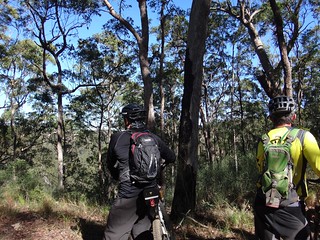 But it didn’t 🙂 Instead of leading down the hill to the east, our track headed up the hill and to the west. But we thought the track was so enjoyable to ride on that we’d follow it and see where we ended up. 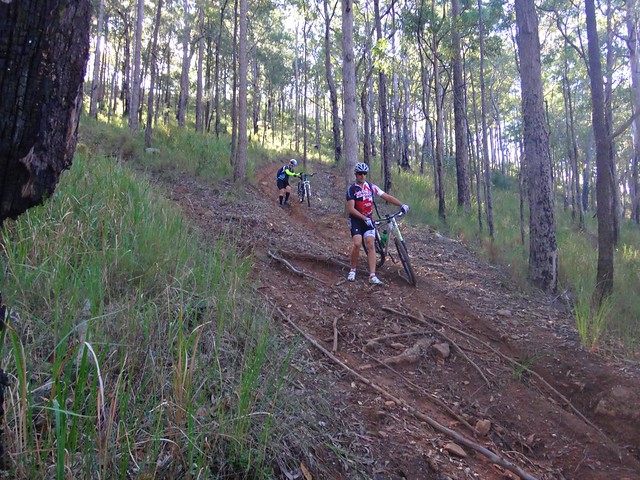 Eventually we started rolling downhill, but Eric was the only one who was able to ride this descent to the bottom. The rest of us scrambled down on foot, using the brakes on the bike to steady us so we didn’t fall over. 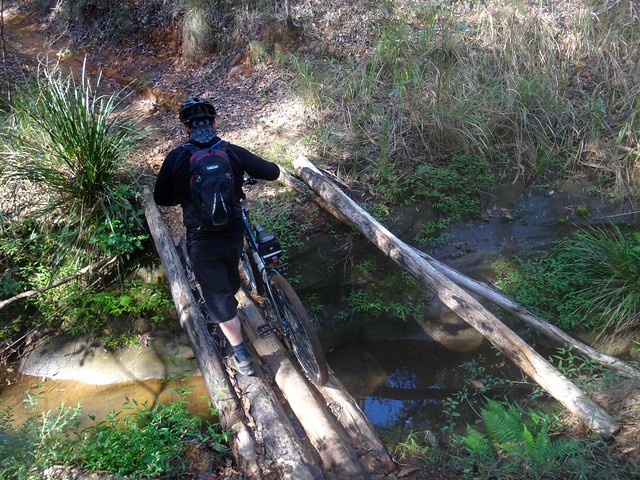 It was a delight to find this hidden trail with its tight single tracks, log bridges and rock gardens. I think we were all glad we’d decided to look at this “inconvenience” the right way and turn it into an adventure. 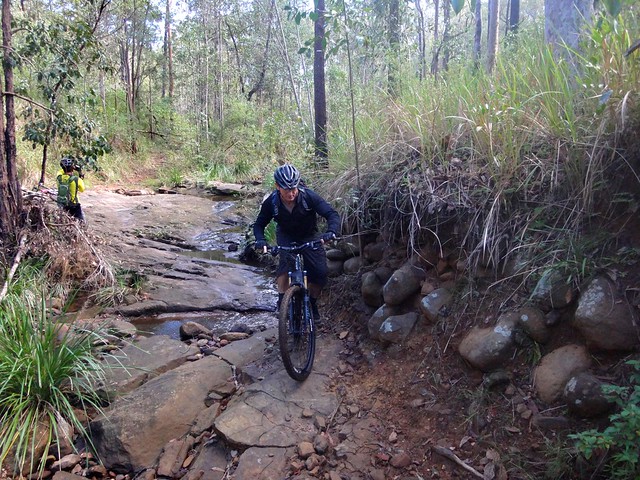 Darb showed us how to nail a creek crossing. 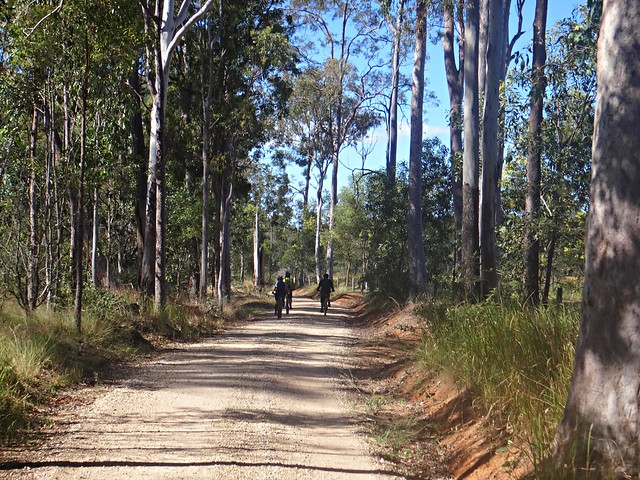 After about an hour, our little detour led us in a large loop back to where we had deviated from our intended course. We decided to backtrack to the main road and continue our original route. 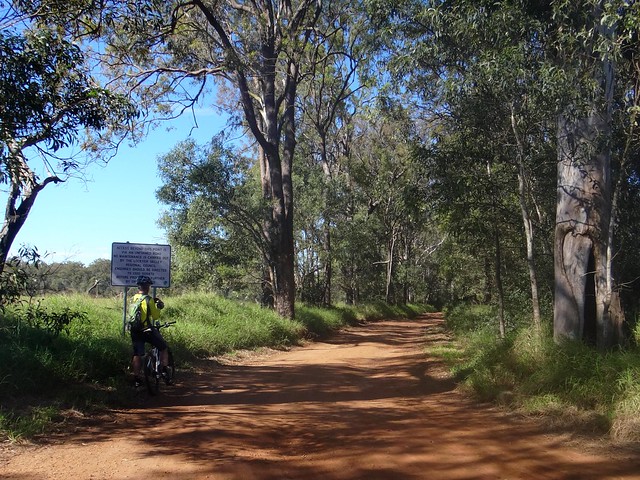 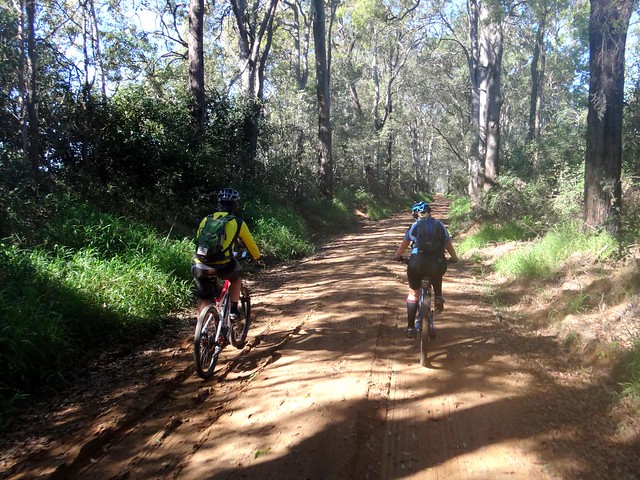 When I originally planned the course, I tried to stick to unpaved roads as much as possible. Thankfully there are many tracks like this throughout the Lockyer Valley. 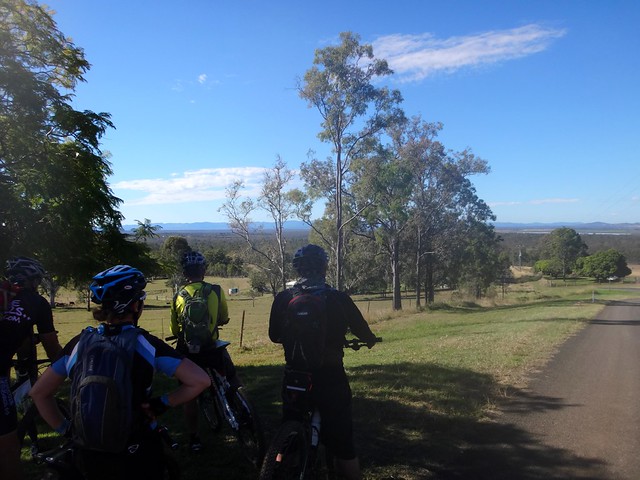 The terrain in this part of the world is quite flat, which makes it an easy ride, and also allows for great sweeping views of the horizon. 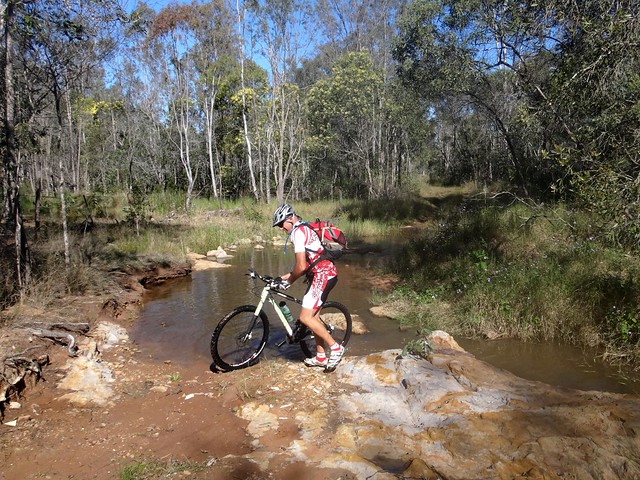 Northwards along another unformed road, Main Green Swamp Road, we had fun crossing a few creeks. 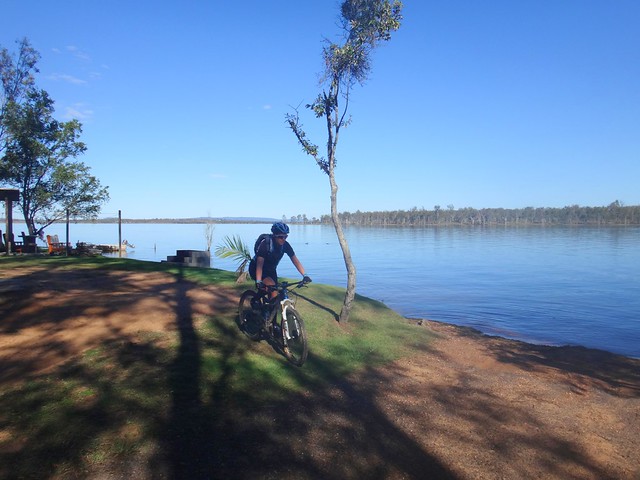 We stopped at Lake Atkinson for lunch, and to enjoy the sweeping views over the water. The serenity helped me understand why there’s an entire community of people living by the shoreline in houses, caravans, and small cabins.

Atkinson Dam was built in 1970 to provide irrigation water to farms in the area. Most of the water flowing into the dam comes from Buaraba creek.

Prior to the dam, there was a lagoon here – one of many that formed naturally due to the flat terrain and abundant water supply.

Today it’s one of many small dams in the Lockyer Valley, which is known as “Australia’s Salad Bowl” because of the large amount of vegetables grown in its very fertile soil. 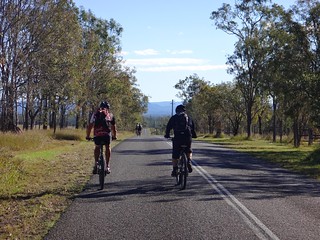 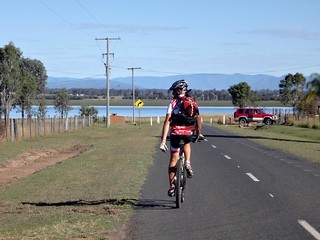 After lunch we decided to alter our original route, and leave Coominya out. Our detour earlier in the day had added an hour to the ride, so we thought it best to trim off the easternmost part of the ride to save an hour. That way we wouldn’t be late, and would get back to the start within our allotted time.

So we rode south-westward from lake Atkinson towards another small dam in the area, Lake Clarendon. 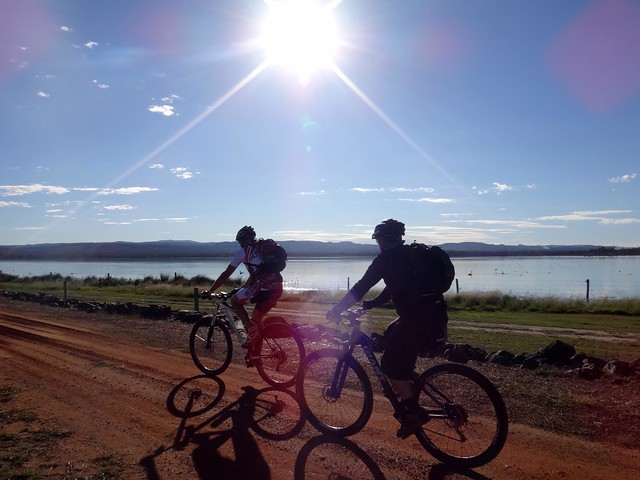 What a pleasant surprise! As we rode along the dam wall, the views across this small lake were gorgeous. 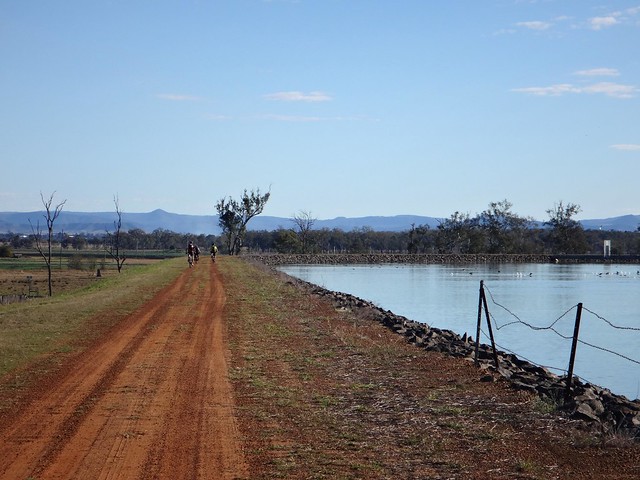 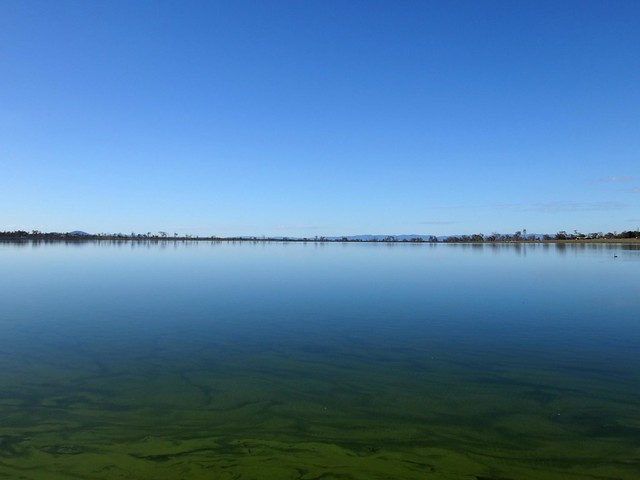 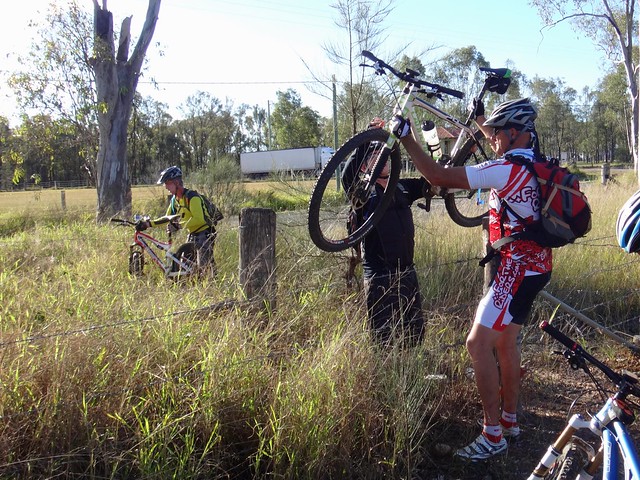 We rode just under 85 km in six and a half hours.

This is a pleasant easy ride. There are only one or two parts in the upper reaches of Lockyer National Park that are challenging.

Thanks everyone for another fun adventure!