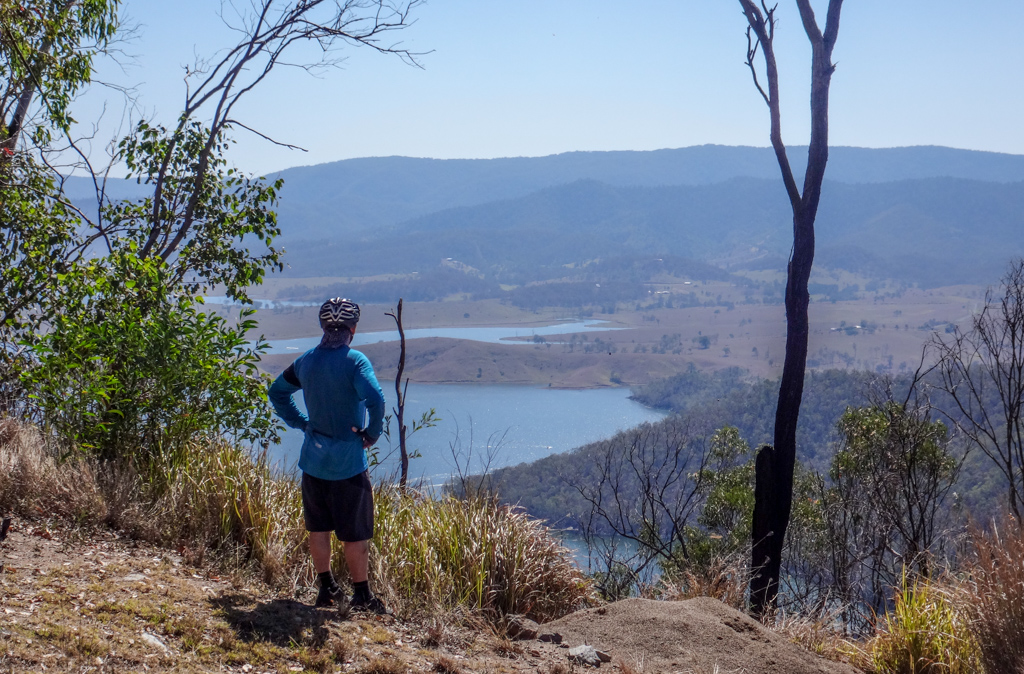 The Mount Brisbane Range stands like a wall on the western shoreline of Somerset Dam.  It reaches heights of almost seven hundred metres, and is covered with National Park and cattle properties.  Today we got a rare opportunity to explore it on our bikes. 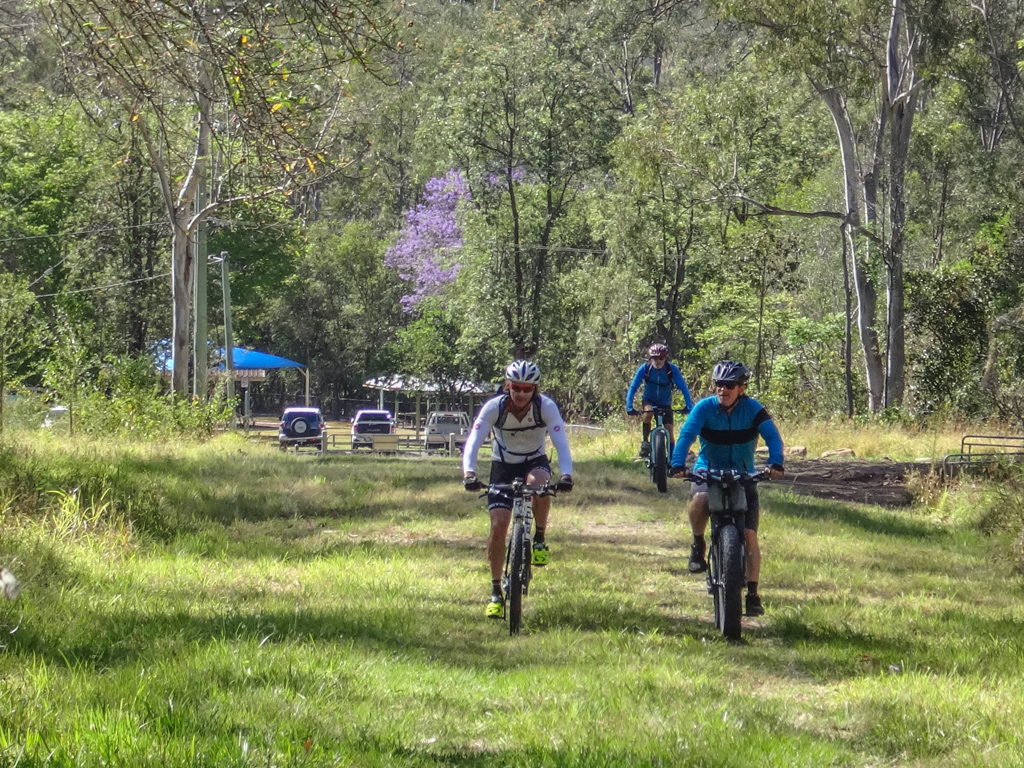 These beautiful heights are normally inaccessible to the public because all of the surrounding land is privately owned.  With some generous assistance of one of the locals (thanks Christine!) we got permission to enter the private property and started our long climb up the mountain. 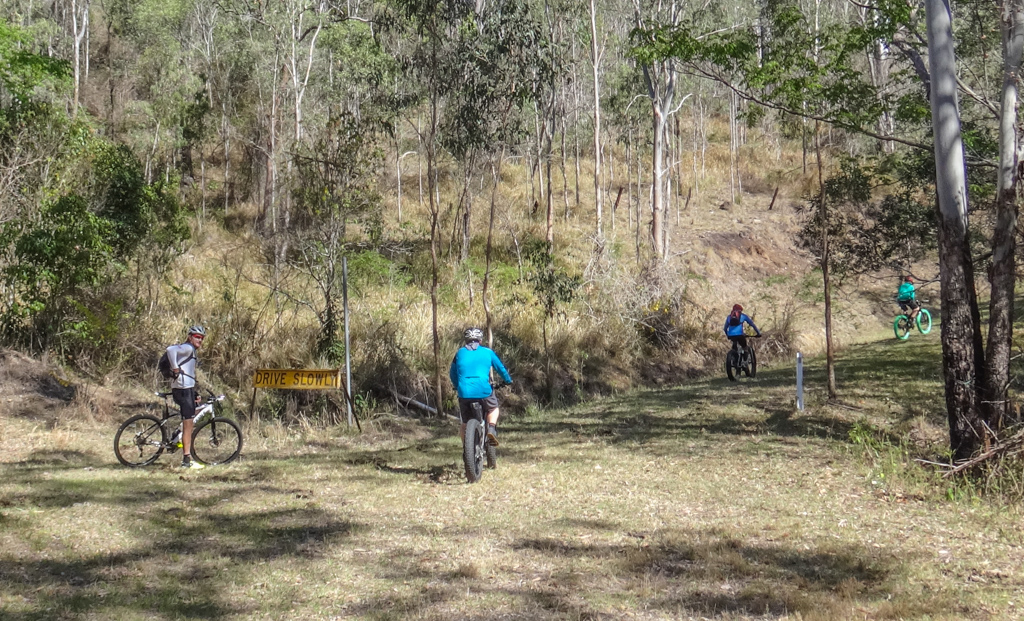 There’s no gentle warm-up for this climb.  After a couple of minutes rolling through grass we faced a steep ascent which rose more than 300m in elevation over the first 2.5 kilometres.

My riding buddies are strong climbers.  We dropped our gears as low as possible, mashed the pedals and laboured slowly upwards. 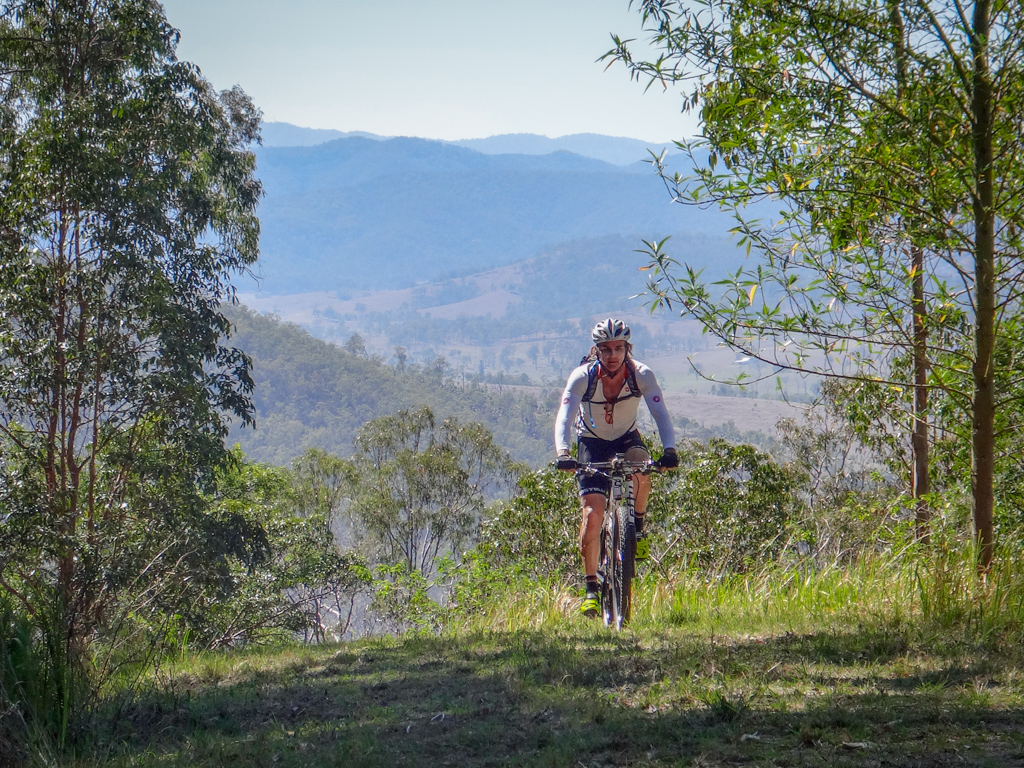 As we climbed, the valley unfolded below us, an undulating blanket of dark green trees and brown paddocks. 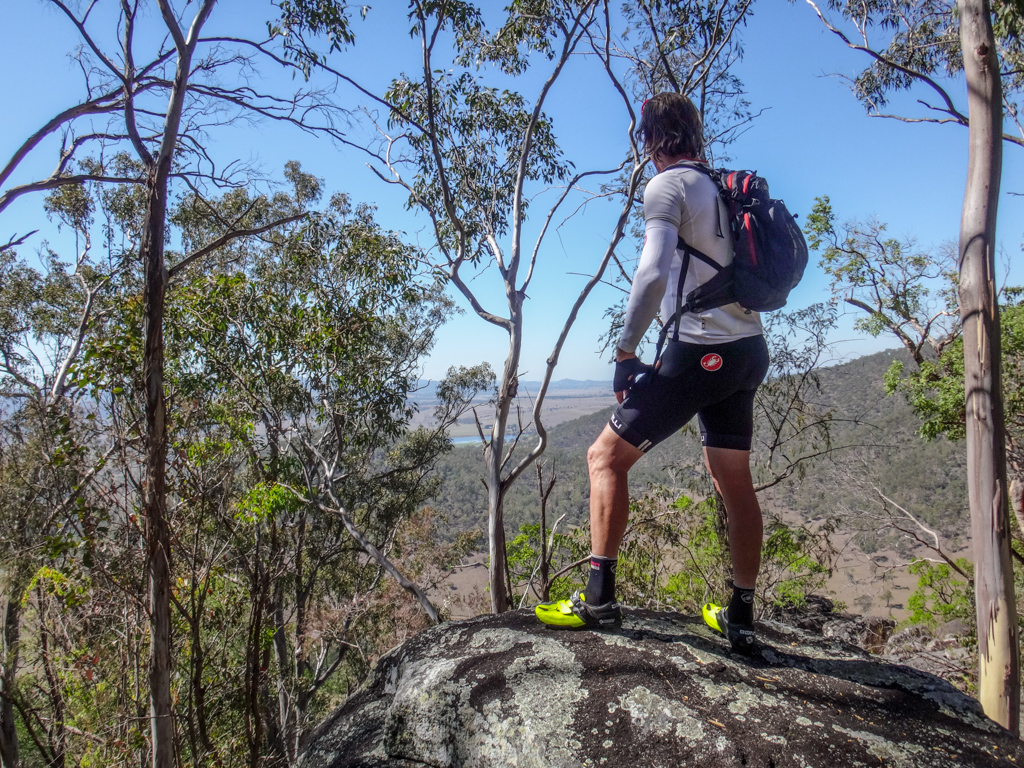 Halfway up we scrambled over a rocky outcrop to survey the landscape.

Below us, the Stanley River twisted southwards from Somerset Dam towards its inevitable appointment with the Brisbane River a few kilometres downstream. 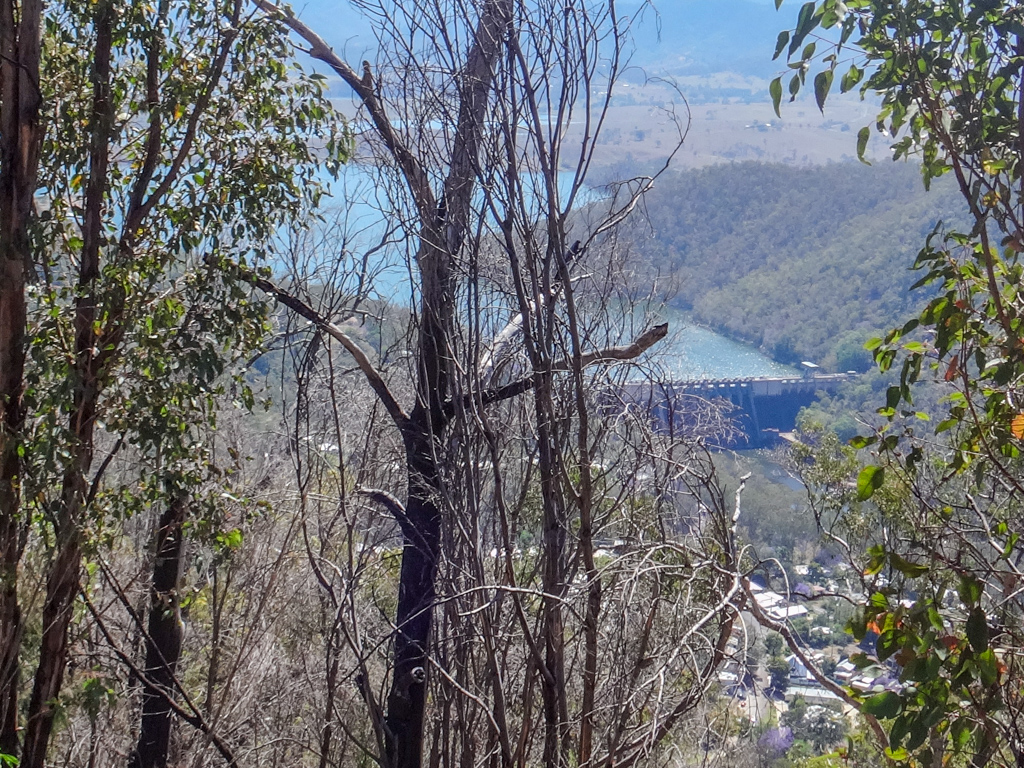 As we climbed the large wall of Somerset Dam came into view.  Built at a narrow point on the Stanley River where it passes through a tight gorge, this dam forms a huge sparkling lake which stretches northwards towards Kilcoy.

After the disastrous 1893 floods, local landowner and state parliamentarian, Henry Plantagenet Somerset, suggested a dam should be constructed across Stanley Gorge.  It took over 40 years before the Queensland Government  acted on his advice.  In 1935 work began on Somerset Dam (named in his honor). The dam would eventually provide drinking water for the growing population of South-East Queensland.

It was completed in 1953 and includes a small hydroelectric power station. 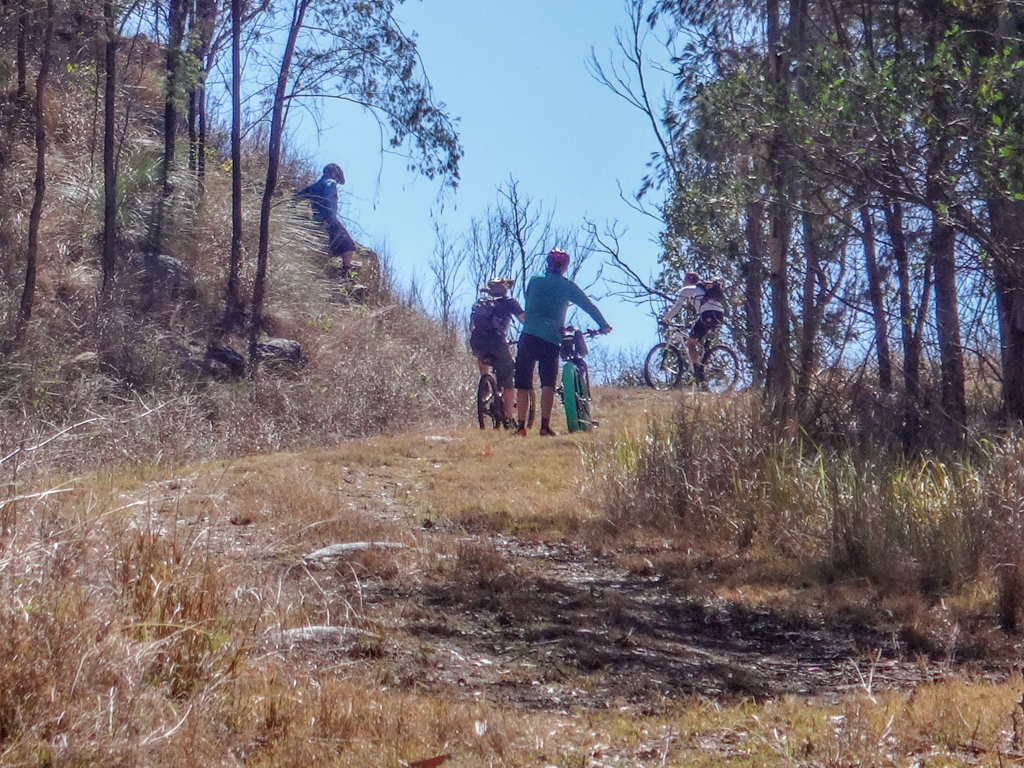 We continued our slow upward grind as the track snaked around the edges of the hills.

As we ascended, the water of the lake sparkled below us, the faint wake of speed-boats barely visible on the water.

We were relieved when we finally reached the top. 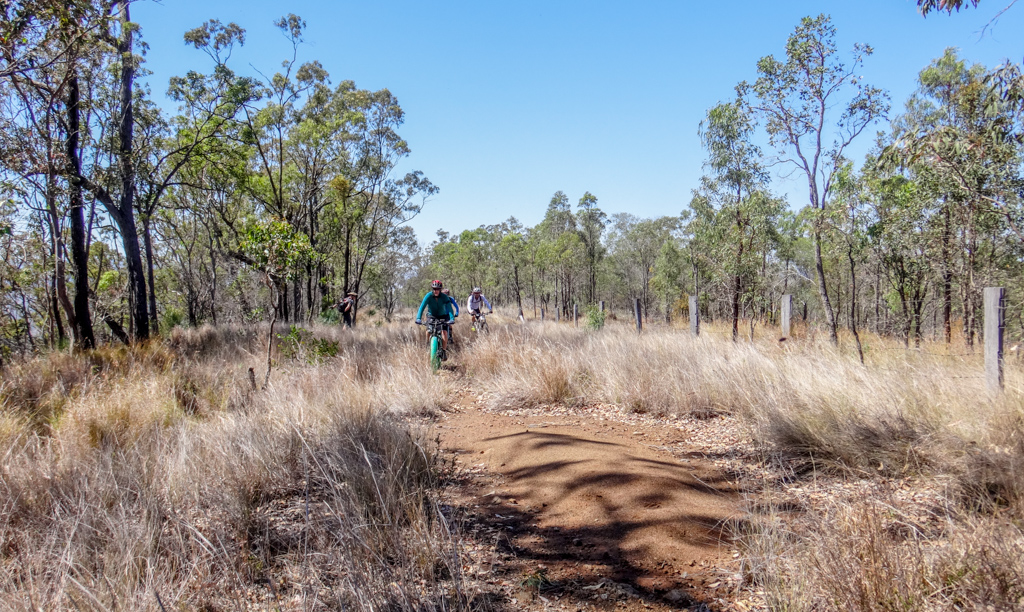 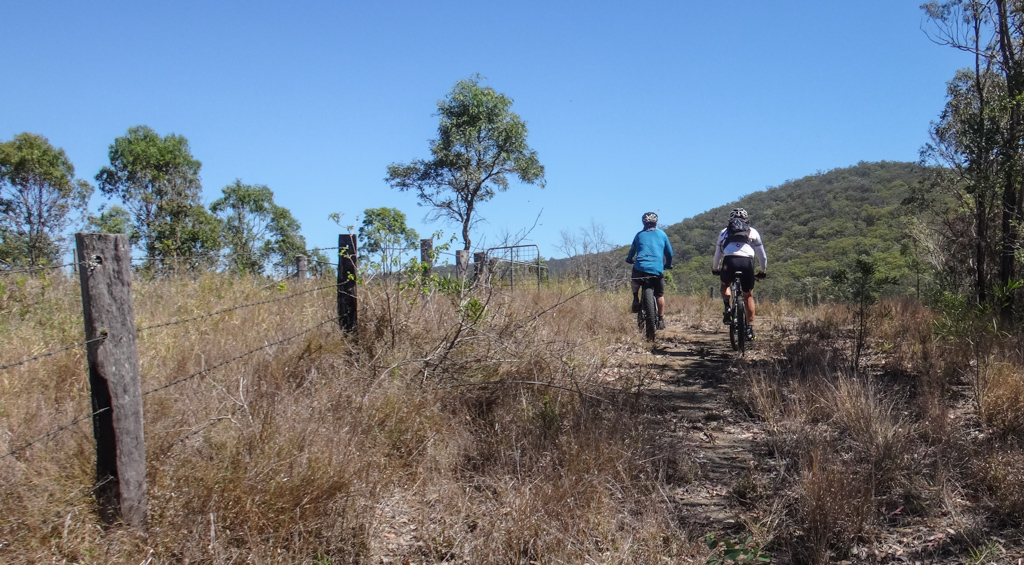 We followed a rough fence-line track north towards the national park. 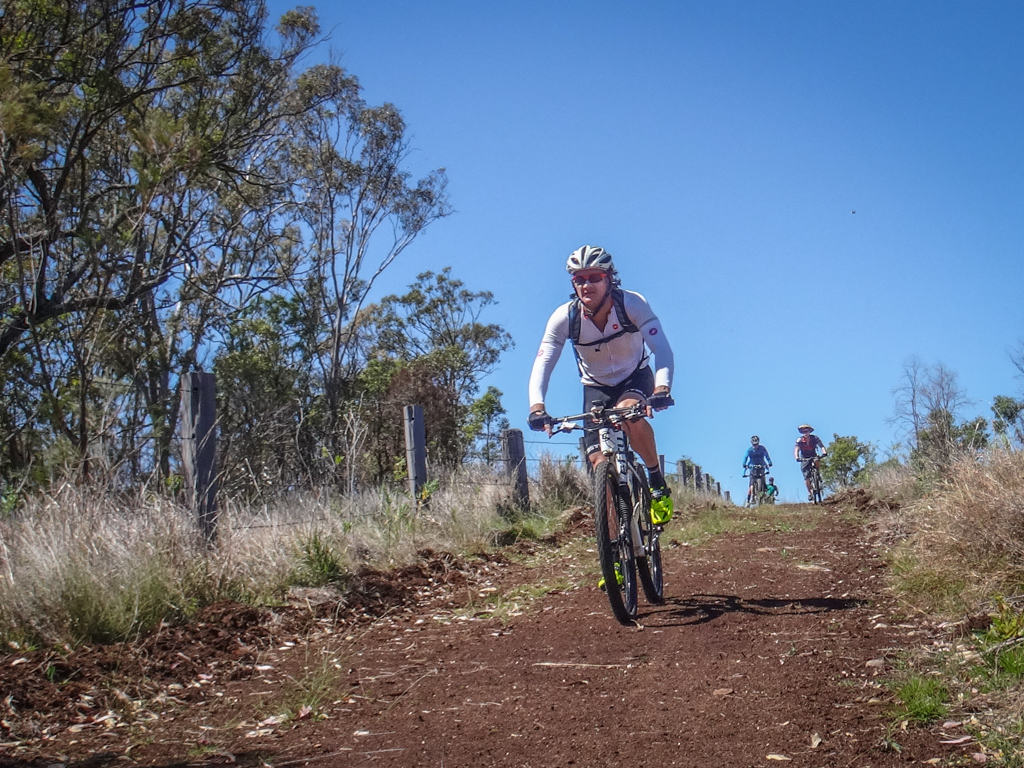 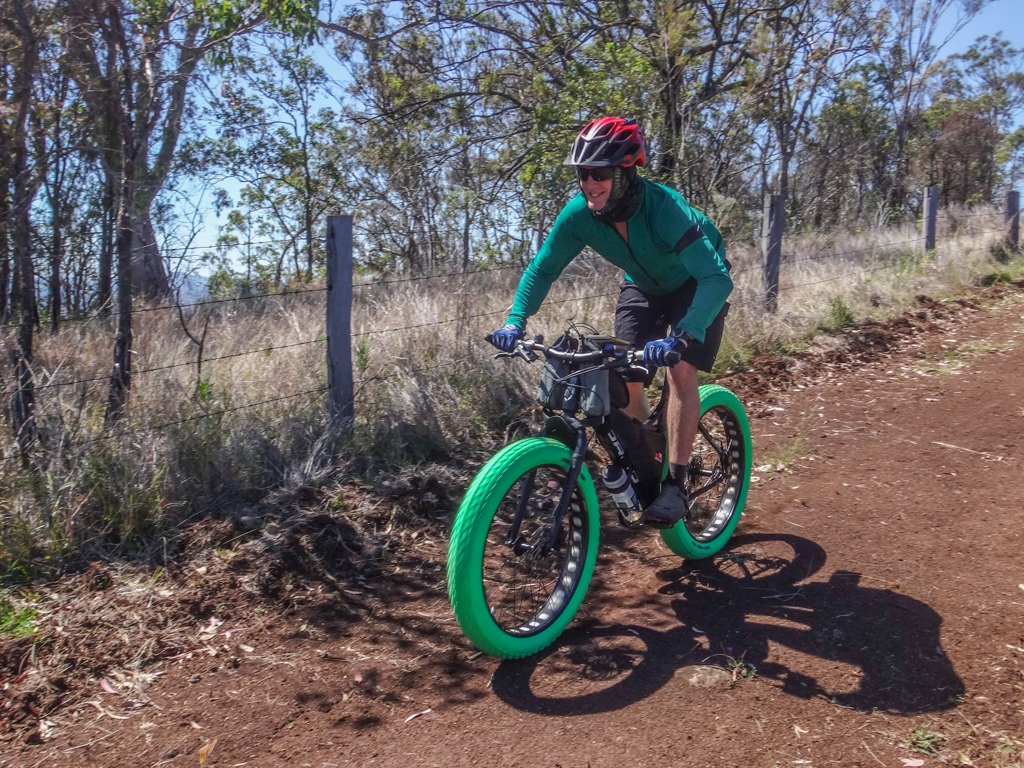 After all the climbing earlier in the day, it was a pleasant change to roll down a couple of short hills. 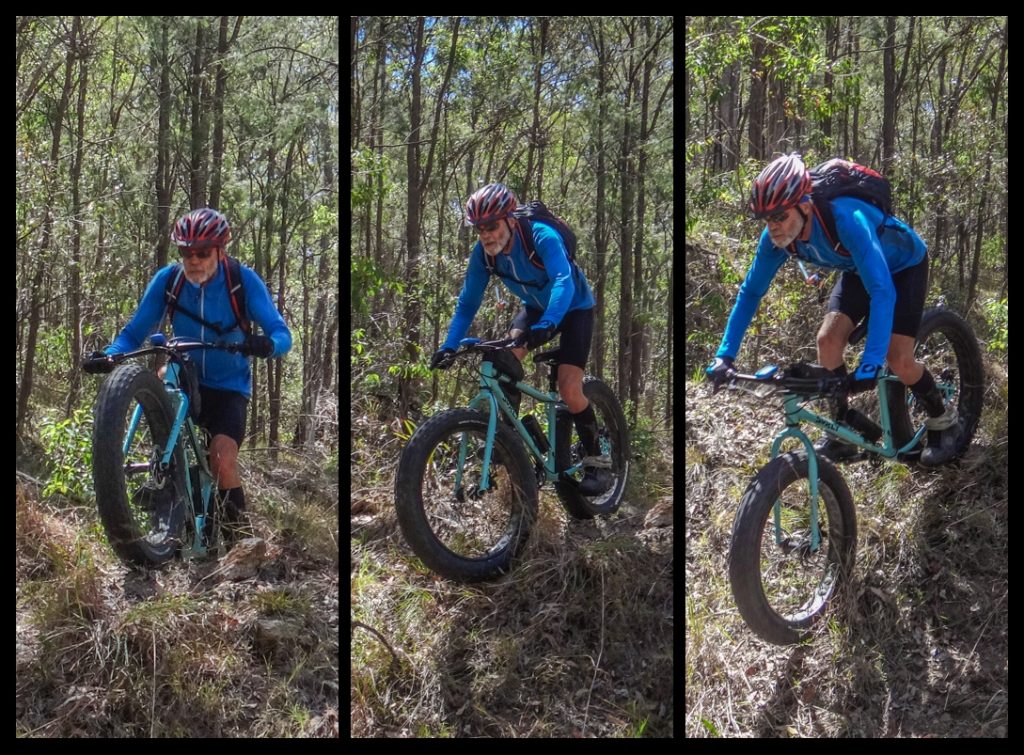 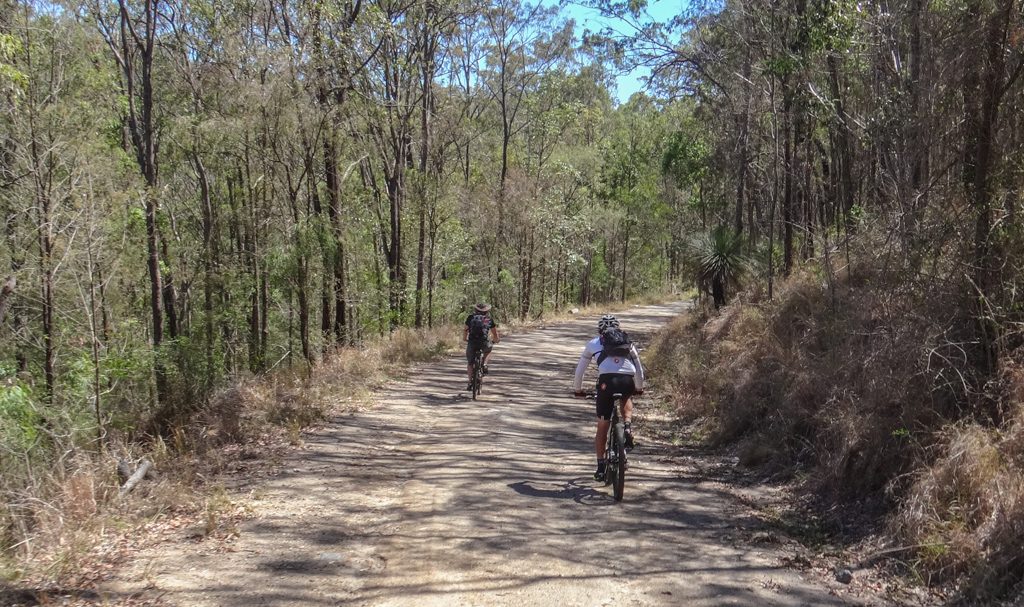 …as if by magic, the track transformed into a smooth wide causeway. 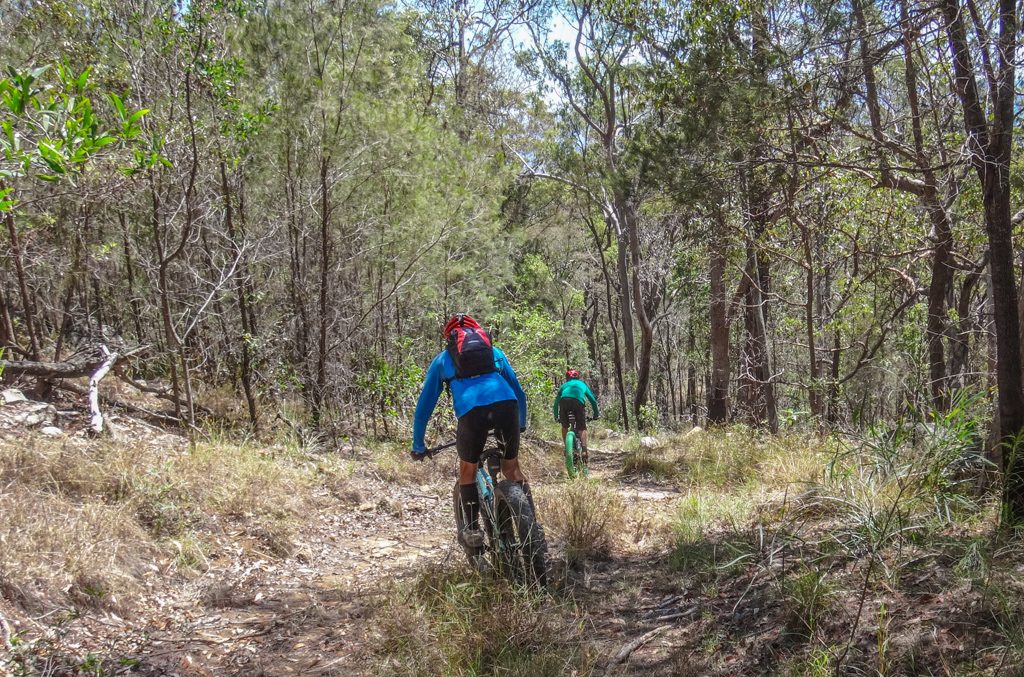 As we reached the northern edge of the range, the track grew rough and steep once again.

We bounced downwards over rocks and fallen logs. 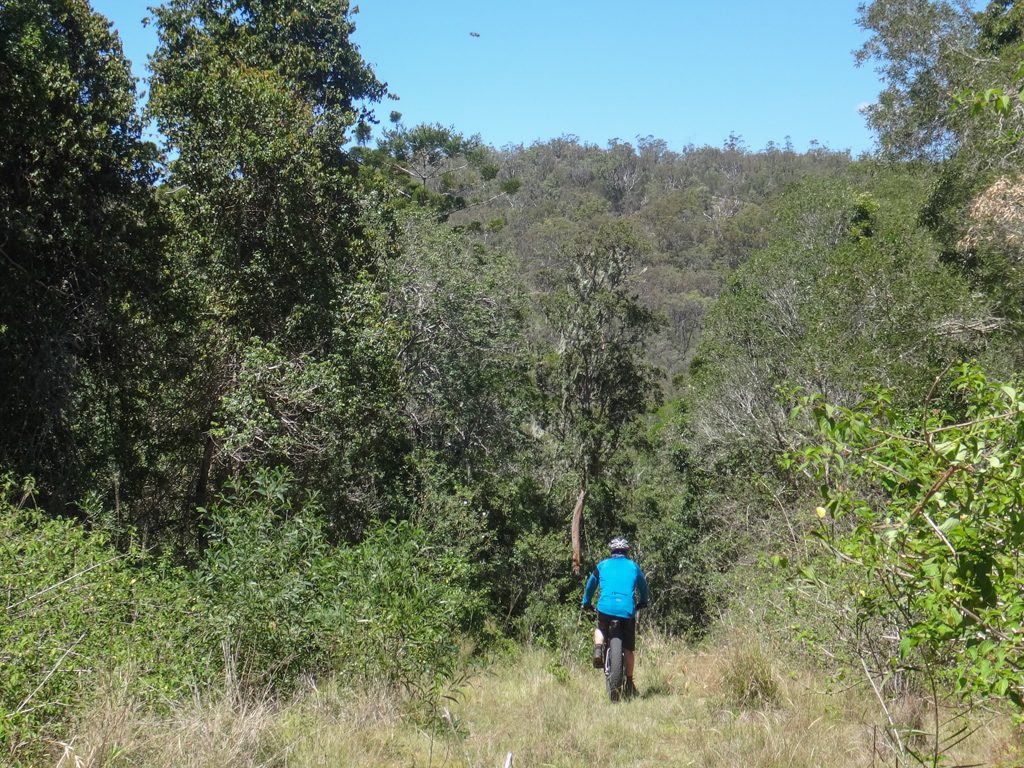 Eventually the track ran out.  Our curiosity satisfied, we turned the bikes around and headed back up the hill. 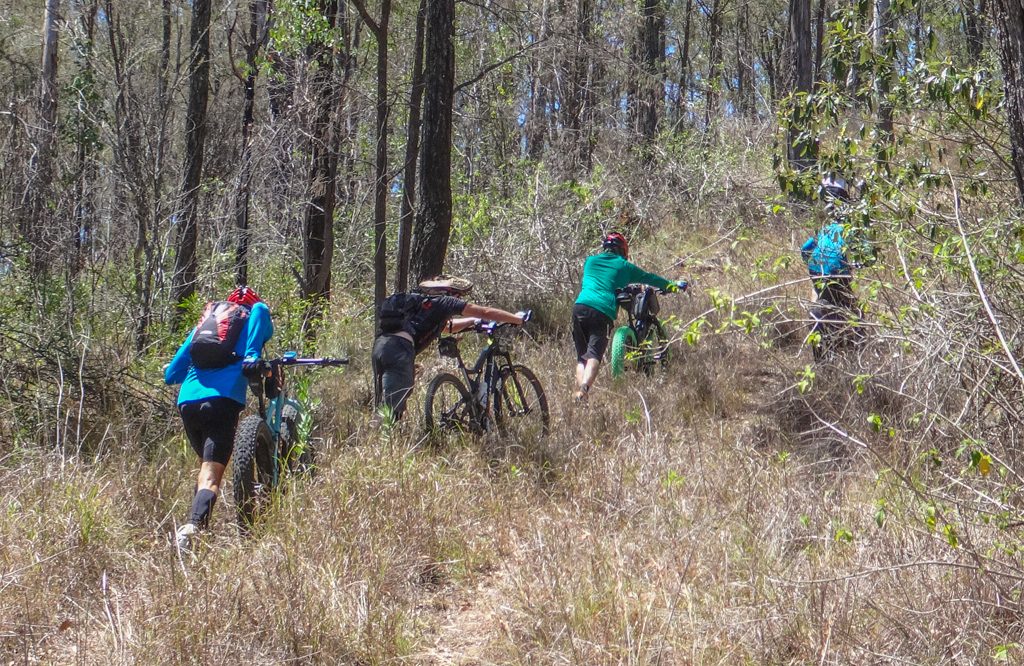 We had to regain the elevation we’d just lost, and pushed the bikes up the steep track that we had bounced down several minutes earlier. 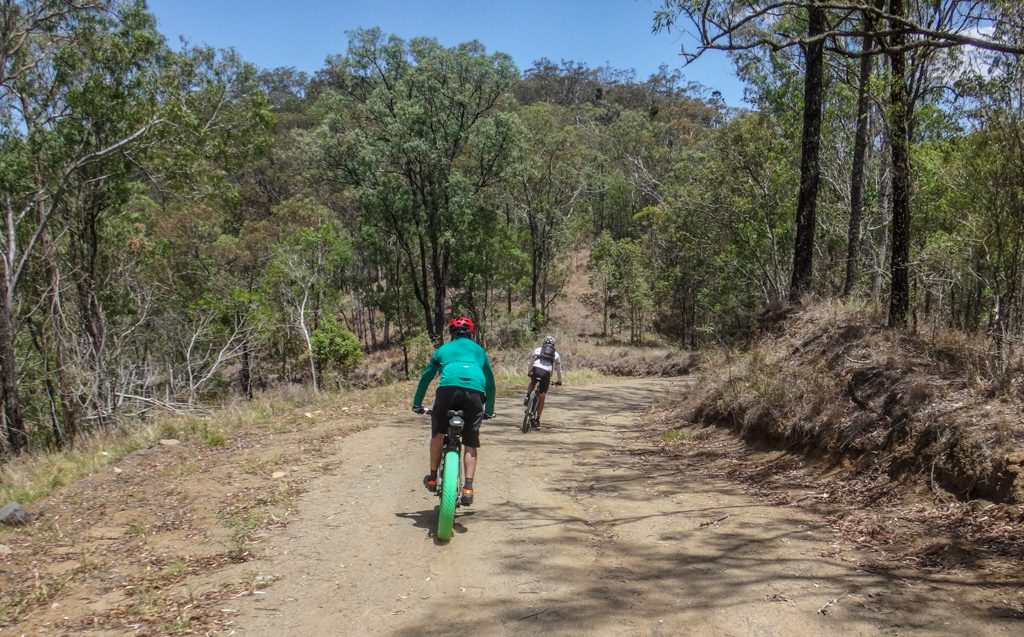 Back on top of the range we headed southwards along more beautifully maintained wide trails. 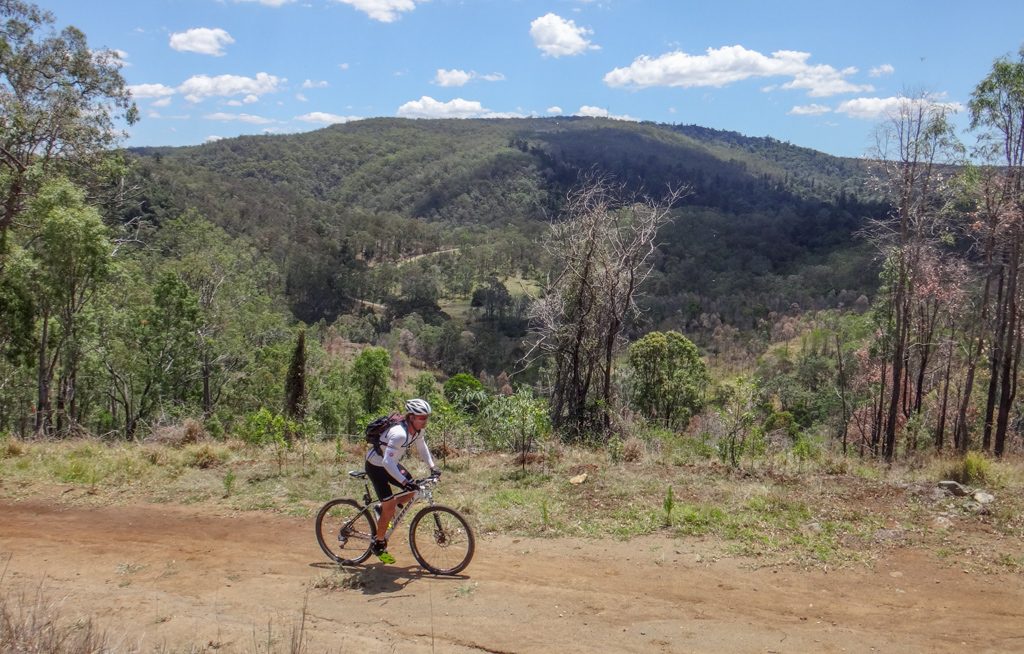 As our course twisted over hilltops, we enjoyed clear views of Mount Brisbane to our north.  Its slopes covered in Hoop Pine and Eucalyptus, Mount Brisbane stands 684 metres above sea level – the tallest peak in this range. 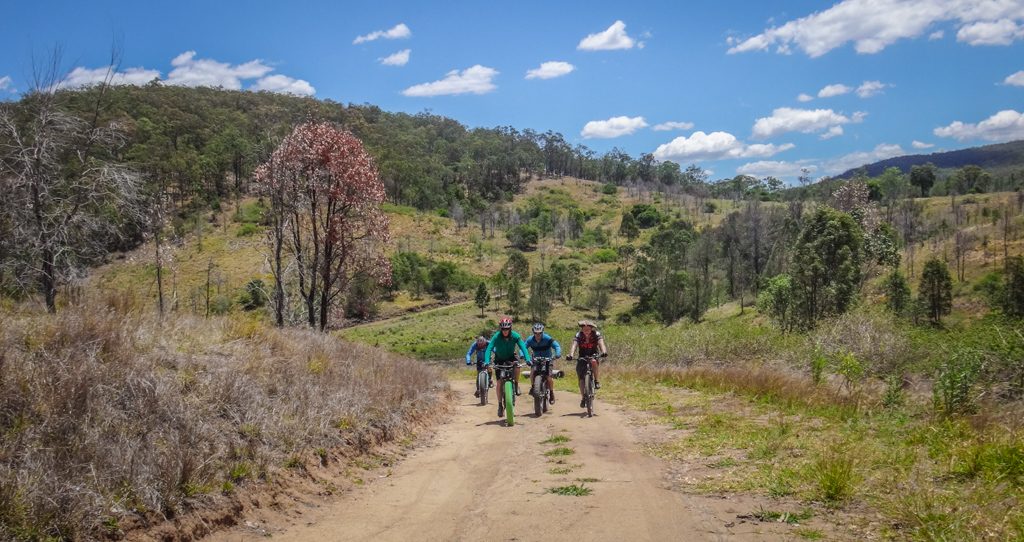 Summer had come early.  Even though it was early November, the temperature had climbed well above 35C.  A couple of us ran low on water. 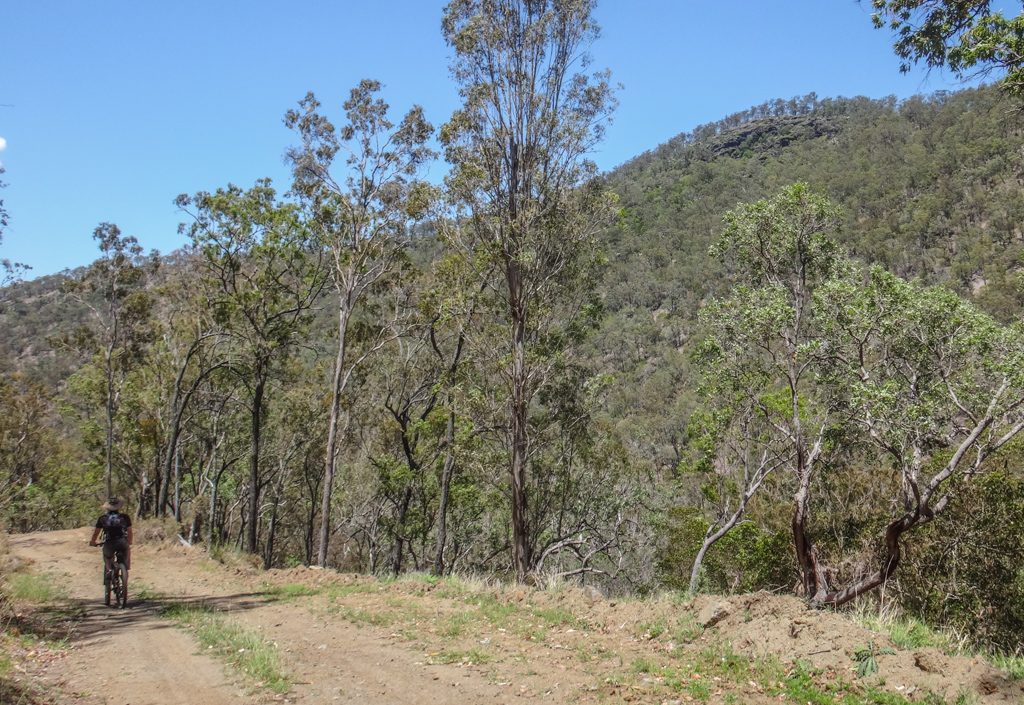 At the southern edge of the range we began our final descent for the day.

The hilltops slowly rose up on either side of us as we coasted downwards.

I took my time.  The views were impressive, and it had taken us a lot of work to gain this elevation.  Why rush it? 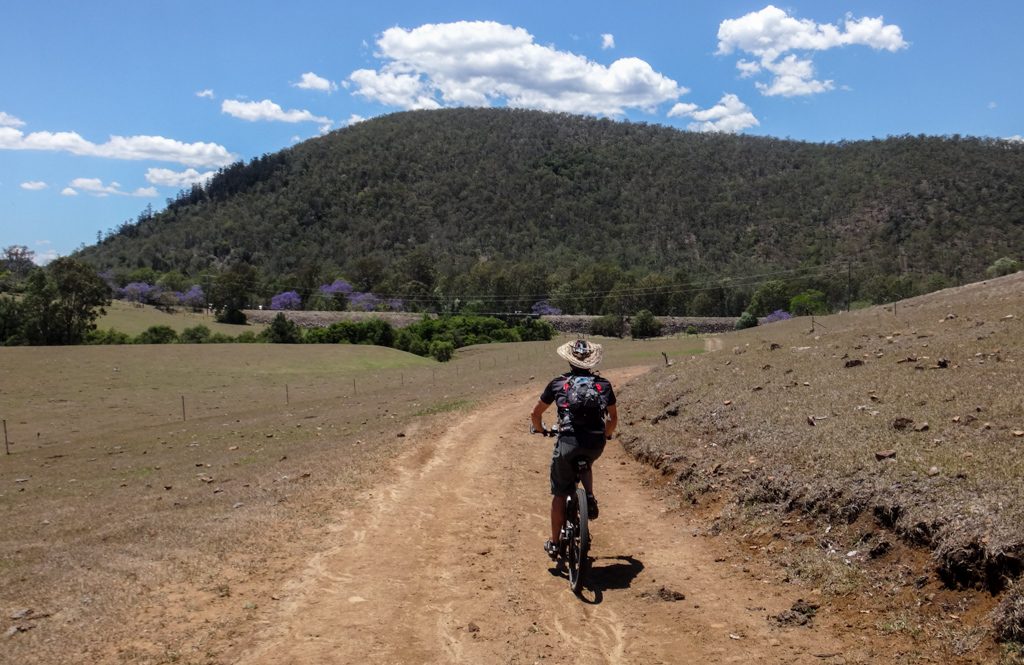 At the bottom of the hill we followed a dirt road back towards Somerset Dam. 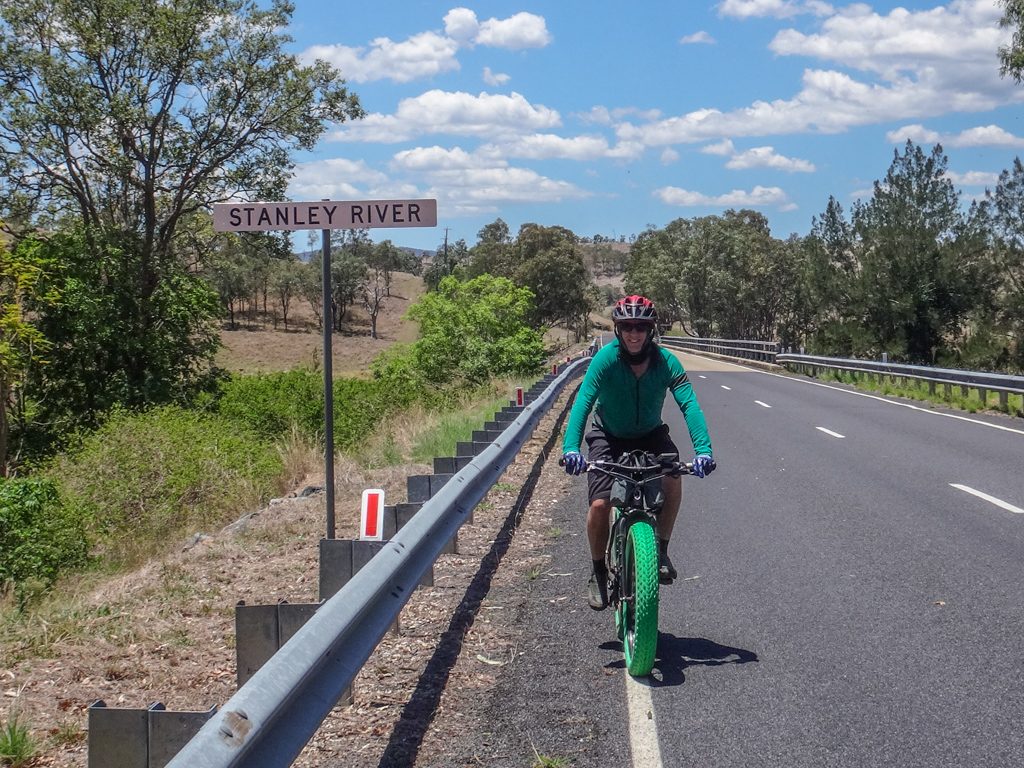 Rather than end the ride there, a few of us took a short detour south.  I wanted to join up the track log from this ride with the course we had taken previously for our ride to Toogoolawah.

After a few minutes we reached the Stanley River bridge.  We’d closed the gap in my map.  I was happy. 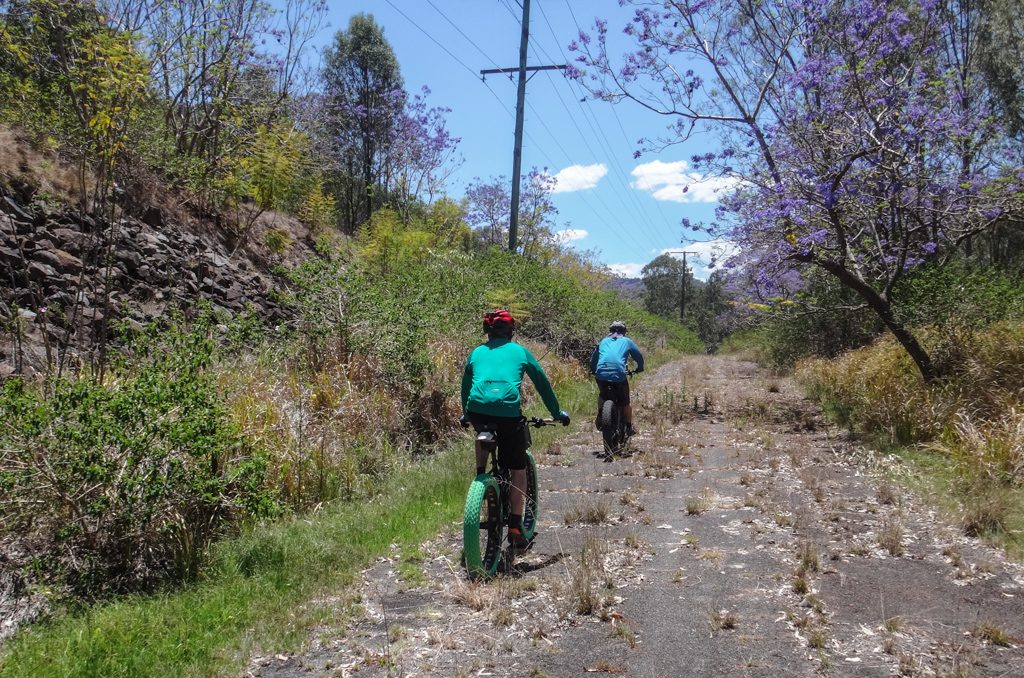 There’s an old roadway adjacent to Esk-Kilcoy Road.  It looks like it hasn’t been used in several decades.

Rather than ride back on the main road, we followed this old road back into town – the clear water of the Stanley River only several metres to our right. 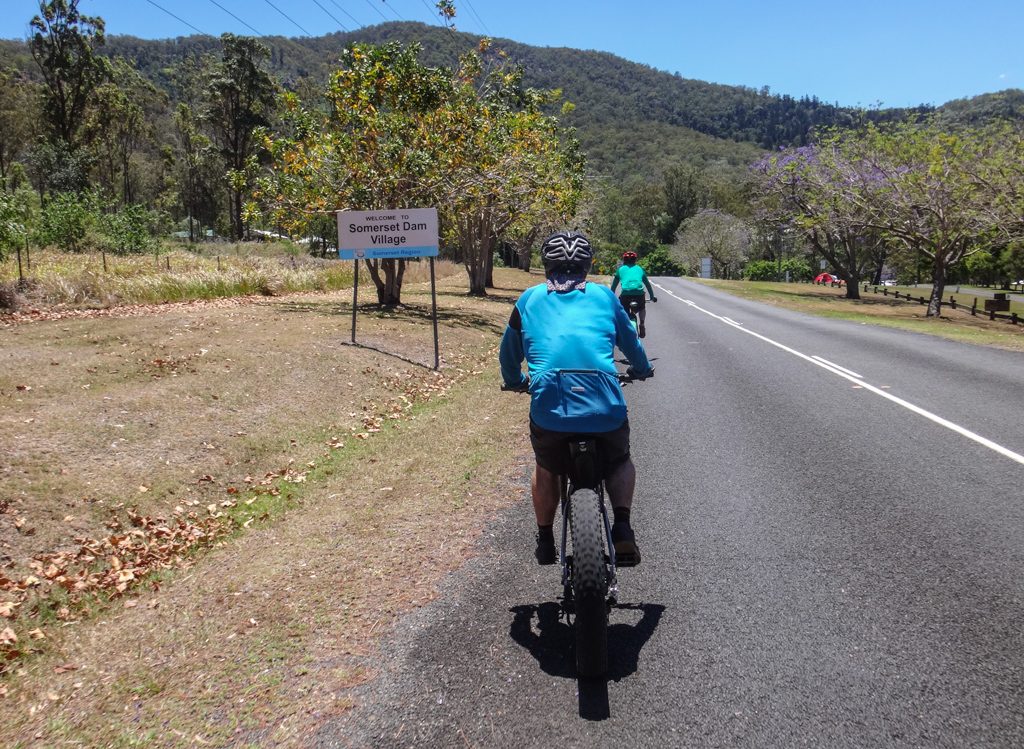 We only rode 25 kilometres in almost four hours.  That seems like a short distance to cover in the time available.  But during that time we climbed about 900 metres in elevation.  I burned about 1,750 kcal.

With the high temperatures, and steep climbs, I’ll rate this one 8 out of 10 on the tough-o-meter.

Thanks to Darb, Adam, Jason R, Jason G and Calum for a fun day out.

Thanks also to Christine from The Dam Shed for your excellent advice and assistance.

PLEASE NOTE.  This ride was on private property.  Please do not attempt to follow our tracks without first obtaining permission from the relevant land-owners. 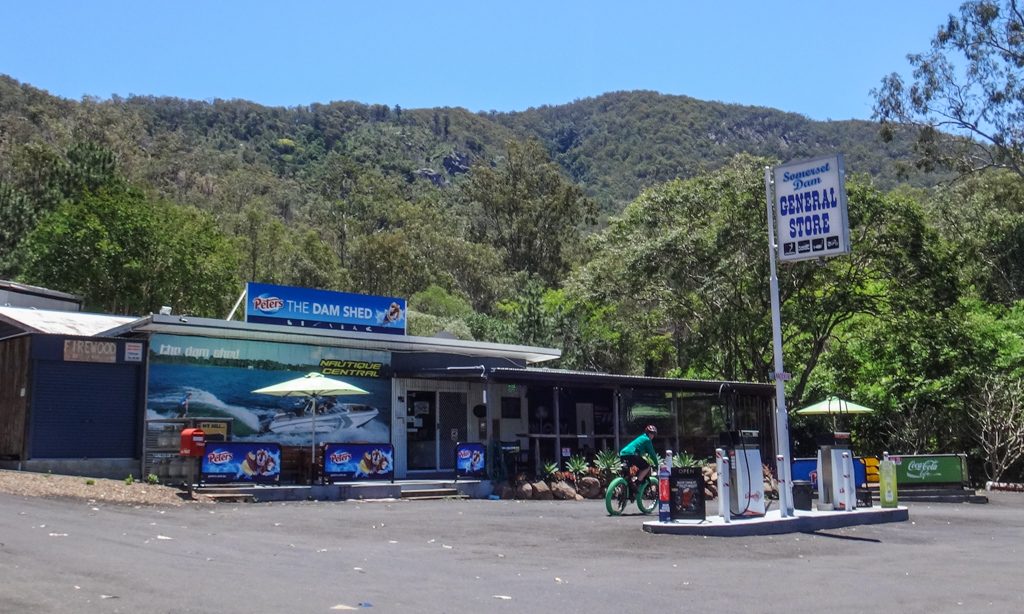