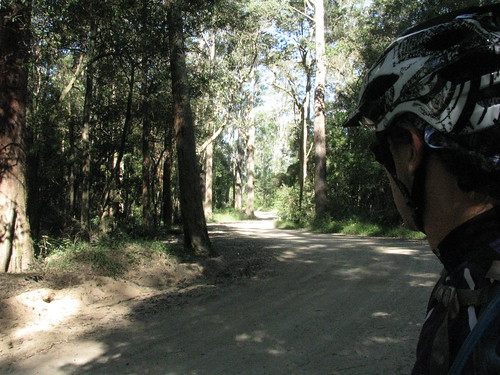 This road was blazed in the 1860’s because of the Gympie Gold Rush. Every man and his dog packed their picks, shovels and tents and headed north from Brisbane to strike it rich. Some accounts even speak of people piling their meagre belongings into a wheelbarrow and walking from Brisbane to Gympie.

Before then, parts of it were actually an old aboriginal trail used by the Turrbal and Kabi / Gubbi-Gubbi people as they walked the area between Brisbane and the Sunshine Coast.

This is part of the same old road that passes through what is now modern-day Strathpine, Lawnton, Petrie and Kallangur. It’s just further north along that same road.

There were no horses on it today, or wheelbarrows, just a few trail bikes, 4wds and one Mountain Bike (me!).

In her book “Reminiscences of Early Queensland“, Constance Campbell Petrie writes how her father, Tom Petrie, helped blaze parts of the road:

When Davis (or ” Duramboi “) was asked to mark a road to Gympie, he sought my father’s assistance for the first part of the way, saying he would know where he was all right when he got to the Glass House Mountains, as he had been there before when living with the blacks.  So Father took him to the other side of Caboolture and put him and party on his (” Tom Petrie’s”) marked tree line to Petrie’s Creek, on the Maroochy River. Then when the line to Gympie was marked, he went with Cobb and Co. to help them pick out stopping places for the changing of horses.  The road was just frightful at that time ; we in these days could not recognize it for the same.