When you’re riding a mountain bike, and the trail you’re following stops at the shore of a lake, there’s really only one alternative if you want to keep going… 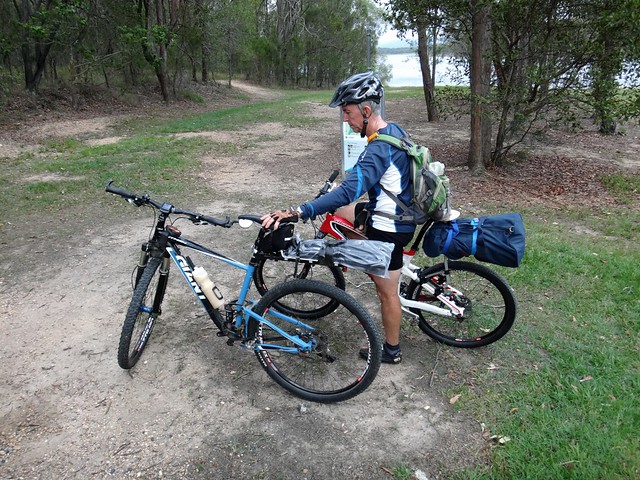 Eric bought an inflatable dinghy recently and has been itching to try it out. He wanted to find out if carring a simple watercraft on a bike would make a whole new type of adventure possible – where rivers and lakes were no longer impenetrable barriers.

So we attached a couple of carriers to the back of the bikes, strapped on our paddling gear, and set off. 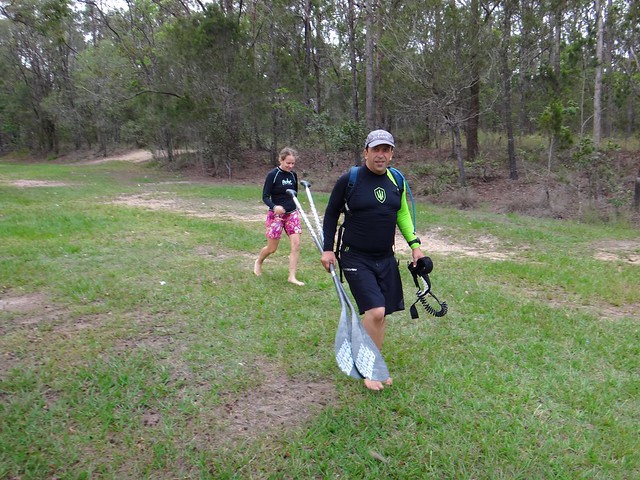 Becca normally rides with us, but today she and her husband Tom would be “life guards”. They brought their stand-up-paddle boards and would paddle close to where Eric and I entered the water, to make sure we could be resuced if something went wrong.

I gave them a rough “mud map” of where we were heading, and we agreed to meet there in about half an hour. 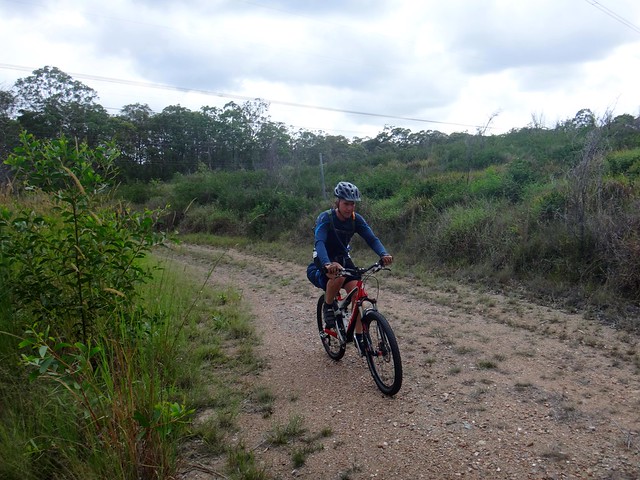 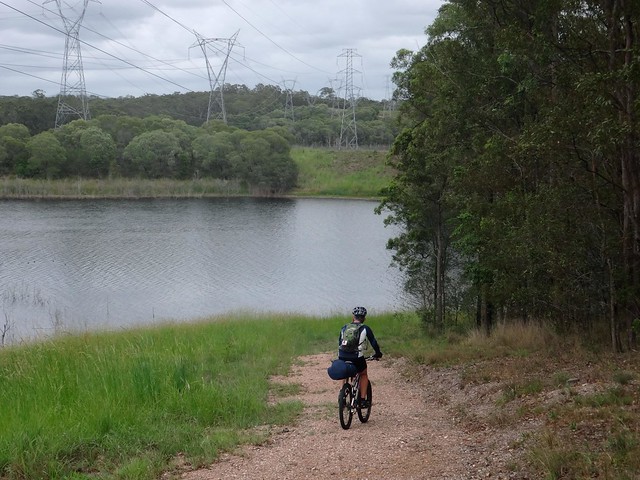 We followed some old familiar trais to the meeting point. Normally I’d stand of the edge of the water here and lament how far it was to get around to the other side. I hoped that today we would fix that problem.

It was an ideal spot – the water was quiet, it was partly sheltered from the wind, and we didn’t have far to paddle. 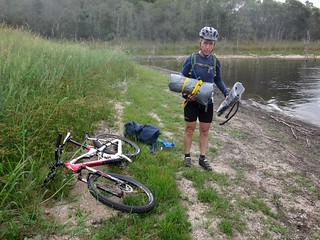 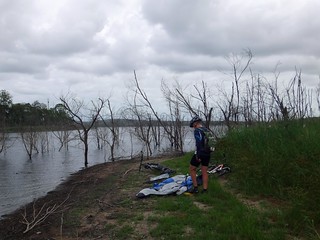 Eric started assembling the dinghy while I “supervised”.

We removed our cycling shoes to protect the plastic liner of the dinghy. We also slipped our socks over the pedals to keep the metal away from the plastic. Getting a puncture on the water would not be much fun. 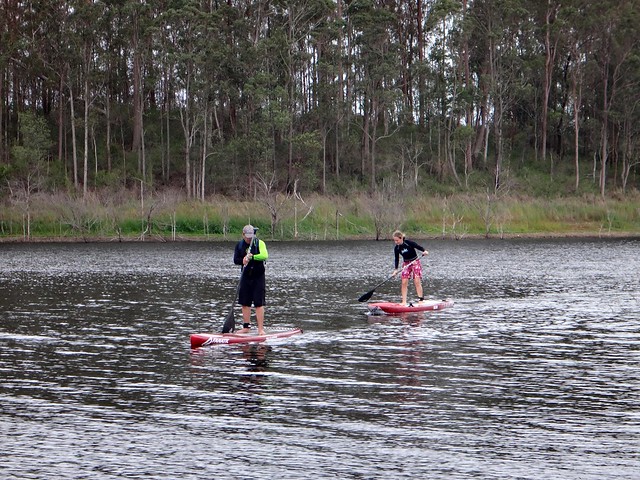 I was amazed how quickly Tom and Becca caught up with us.

“Surely bikes are much faster than paddle-boards”, I thought haughtily to myself. How did they catch up so quickly?

Tom proudly checked his brand new GPS watch. “It’s just over a kilometer from the start”, he quipped. While Eric and I had meandered a serpentine route along the shoreline to get here, Tom and Becca had pretty much paddled a straight line.

Becca watched on curiously as we tied both bikes to the front of the dinghy.

Would this thing float? 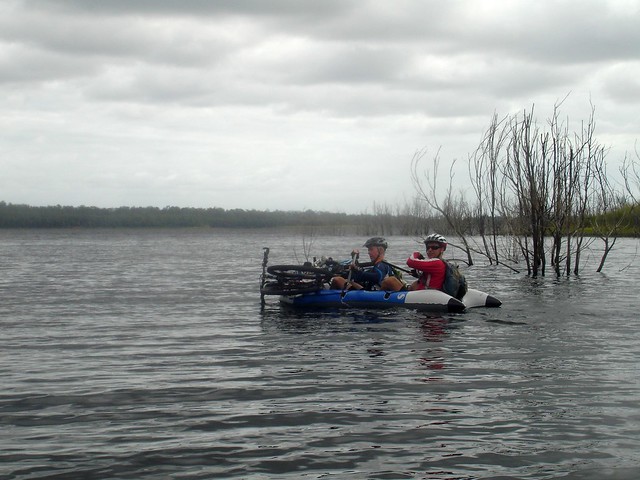 Eric paddled left, I paddled right, as the bikes sat on the front.

Unbeknownst to me, the bottom of my back pack was perilously close to the water line, but it only suffered a few splashes.

The bar end of one bike dipped in the water occasionally – but that was fine.

The paddles whipped up a few droplets of water – so we got a little wet – but that was fine too.

The only challenge was the wind. An easterly was blowing across our bow. We wanted to go one way, but the breeze was suggesting we go somewhere else. We were persistent, and with a bit of effort made it to the other side… 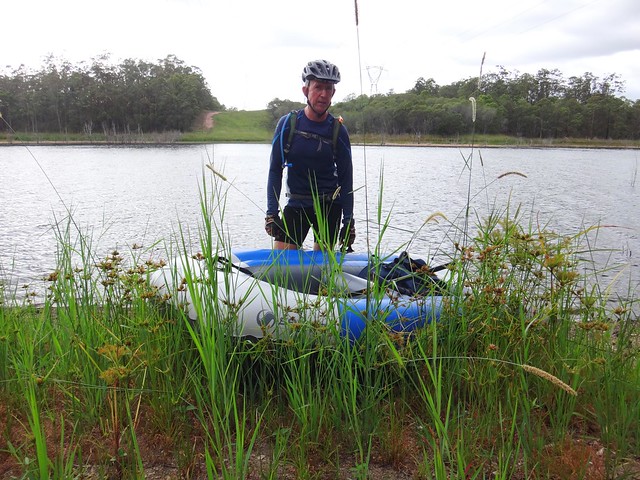 We waded ashore on the other side, untied the bikes, and prepared to repeat it all again.

We had landed on a thin peninsula. Our plan was to carry all the gear 150m over this thin finger of land to the other side, load up the dinghy again, repeat, and rinse. 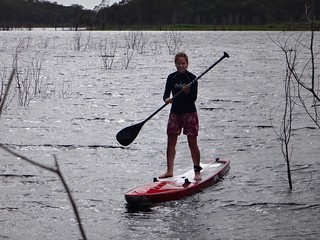 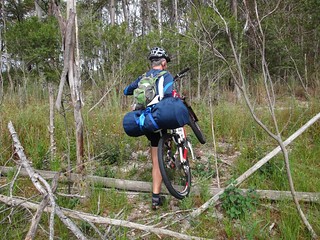 We waded ashore for the second time, while our lifeguard floated, watching us carefully.

After profusely thanking Tom and Becca, we deflated the dinghy, loaded up the bikes, and bashed our way through the coastal scrub in search of a track. 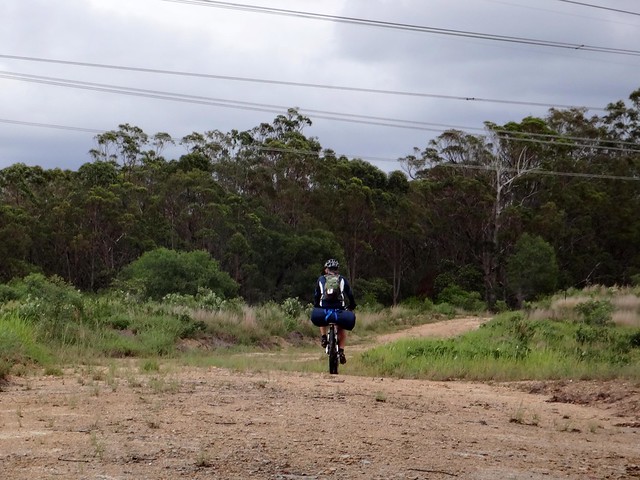 It took us about ten minutes to eventually find a management trail under the power lines.

I had visited this spot (the long way round) a few years ago, and wanted to take Eric to one of my favourite spots. 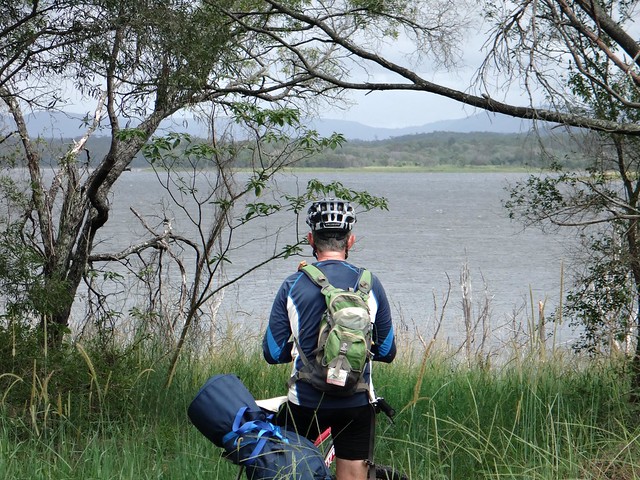 “Rockangle” was a farm established by the Skerman family in the 19th century. Percival Skerman wrote about how in 1862 his parents Fred and Alice, and his grandparents suffered a shipwreck off the coast of Tasmania aboard “The Netherby” before finally arriving here to build their farm on the banks of the North Pine River.

When she took the ground on a rocky bottom, with a reef stretching out to the west close under the bow. The ship was wrecked. The port lifeboat was then lowered to ascertain if a place could be found to land passengers as the ship was bumping severely and the surf striking on her stern and port quarter. Three attempts were made, but no safe landing could be seen in the darkness; the surf breaking over the rocks in all directions; We had therefore to wait until daybreak approached in the greatest fear that the ship would break up through the night as she heeled over to the port bilging heavily, the sea breaking over the port or seaward side. By 8.30 p.m. the ship began to leak; the passengers manned the pumps and worked perseveringly, but to no avail, for before long, the lee side between decks was under water, the purser with assistance, endeavouring to save as much provision out of the hold. The women and children collected in the fore cabin and saloon, behaved themselves uncommonly well, awaiting the fate destined for them with the utmost patience. During the night, a pinnace, a large lifeboat with a sail at each end, was attempted to be got off the skids and put overboard on the lee, or sea side over the port quarter, but she was stove against the ship’s side and torn adrift, the men that were in her barely escaping with their lives. At daybreak, the lifeboat was sent to make another attempt to find a landing place and carry a line out to the shore under the command of Mr. Jones, Chief Officer, which was with difficulty performed as the sea was breaking fearfully over the rocks. A line was eventually made fast to one of the rocks where the sea broke with the least violence and, about 8 a.m., a commencement was made to land the passengers, women and children first. The debarkation of the passengers was superintended by Captain and Doctor, who were in attendance by the gangway from first to last to regulate the number of passengers who were to go in each boat and to keep back a rush which was from time to time made to get into the boats. The two lifeboats were employed for that purpose, the one commanded by Mr Jones, Chief Officer and the other by Mr. Parry, Second Officer. Many of the passengers had to be dragged through water up the rocks, after which they had to make a circuit, wading through some inlets of the sea and over rocks again before they could set their feet on terra firma. The landing of all the passengers was finally accomplished by 3 p.m. The first male passengers who landed went around to see if any fresh water was procurable, and to our great delight, heard that at a distance of about a mile from where we landed, a spring was discovered, affording a plentiful supply of delicious water. As soon as they landed, the passengers cut away the bushes to make a resting place for the night, and fires were kindled all round to warm themselves, as all were drenched to the skin.

The maritime challenges of the Skermans loomed large and heroic compared to our small excursion by dinghy. These pioneers overcame incredible obstacles to build their lives. 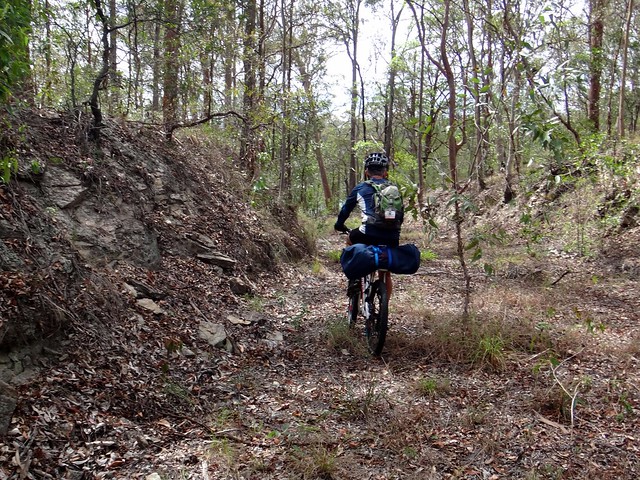 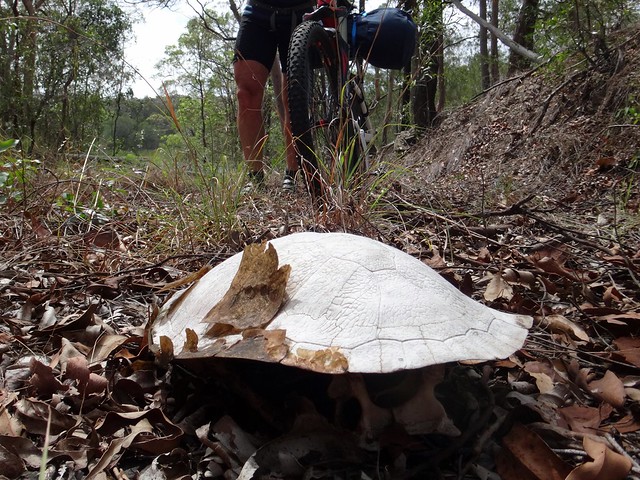 We followed the remnants of a few old roads.

Before the North Pine Dam was built, and most of the land inundated by Lake Samsonvale, much of this area was farmland.

Instead of terminating at Warner, Samsonvale Road came all the way through here. Portions of it, with road cut-aways are still visible, although they’re overgrown, and none of the pavement remains. 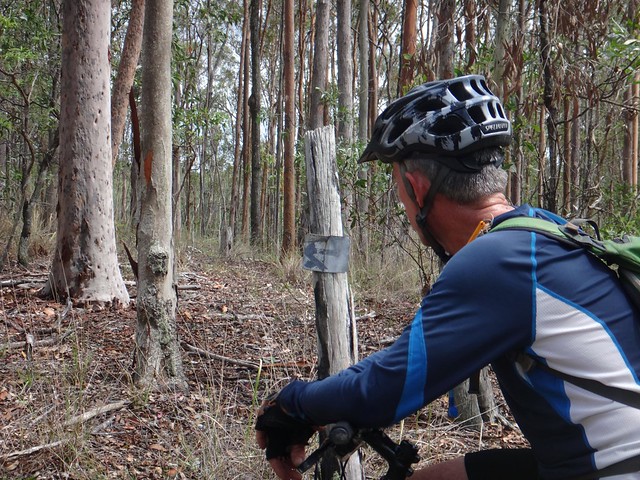 All around there are clues hinting that people once lived here. 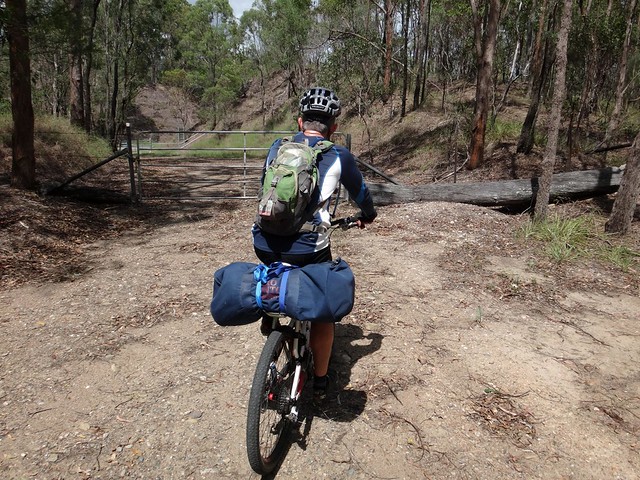 We left history behind and started making our way back home… 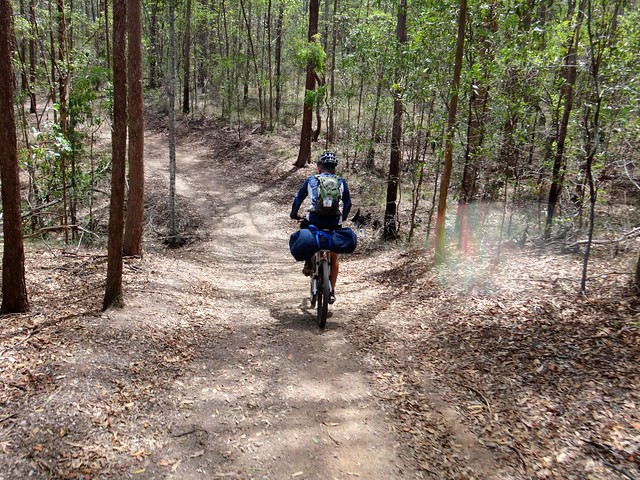 … back along the familiar trails at Forgan Cove… 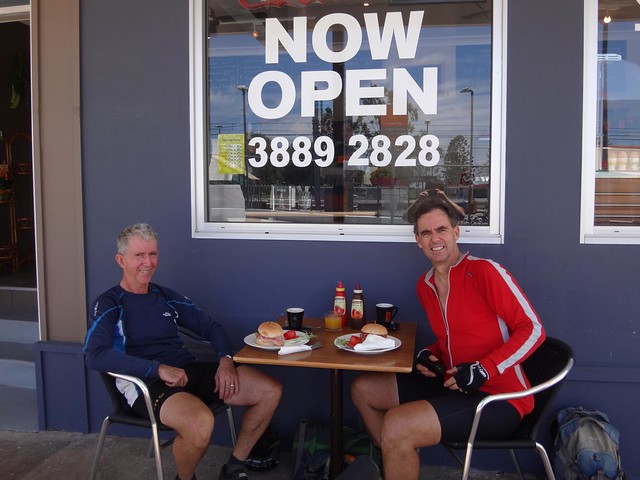 …to the welcome but opulent comfort of the Lawnton Coffee shop.

We travelled just under 40km in about 5 hours including breaks, inflation, deflation, and coffee.

Although we employed some unusual methods of locomotion, this was a relatively easy and thoroughly enjoyable ride.

Thanks Eric for making this wonderful adventure possible.

Thanks to Becca and Tom for keeping a watchful eye on us.

And thanks Tom, for some great photos!

Bike in a Boat

5 Replies to “Pedal and Paddle”