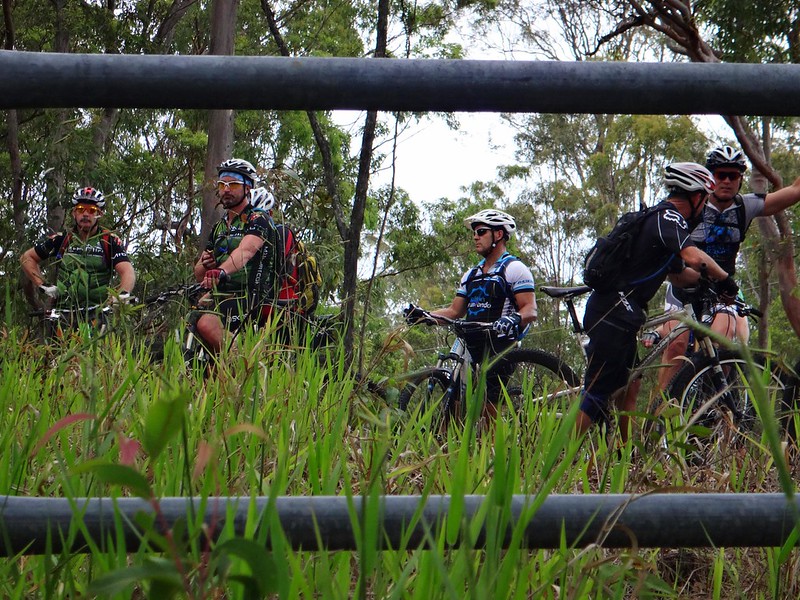 We had the day off on Monday (it was a public holiday) so my friend Neil Bang decided to organize a group ride with some friends from MTBDirt.com.

Our route would take us from familiar single tracks at Bunyaville out to some steep and challinging fire trails at Clear Mountain.

It was going to be hard work. 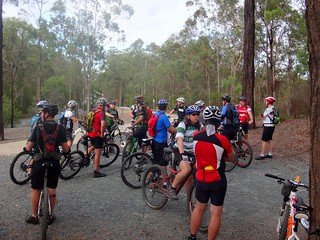 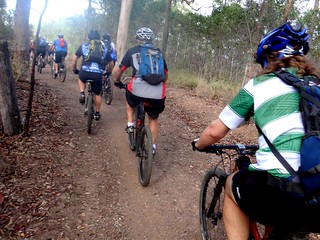 It’s always exciting when a large group of mountain bikers set out on an adventure. This morning about 16 of us set off from the “Jurassic” trailhead at Bunyaville. 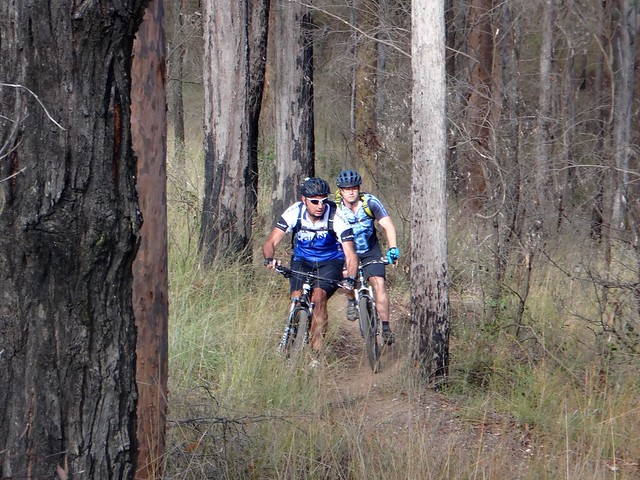 We followed the “Waynes World” and “Minivan” tracks out of the state forest, heading towards the South Pine River. 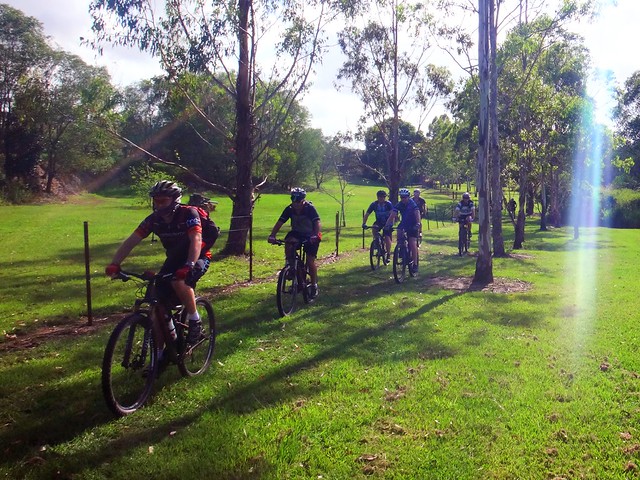 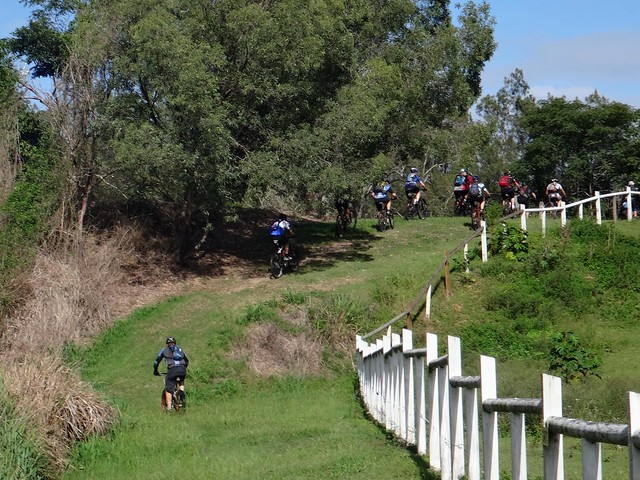 The trail snakes westward for about 2 or 3 kilometres, grassy green tracks following the river. It’s a pleasant ride, although sometimes the grass is a bit high, which occasionally makes it difficult to see the track. 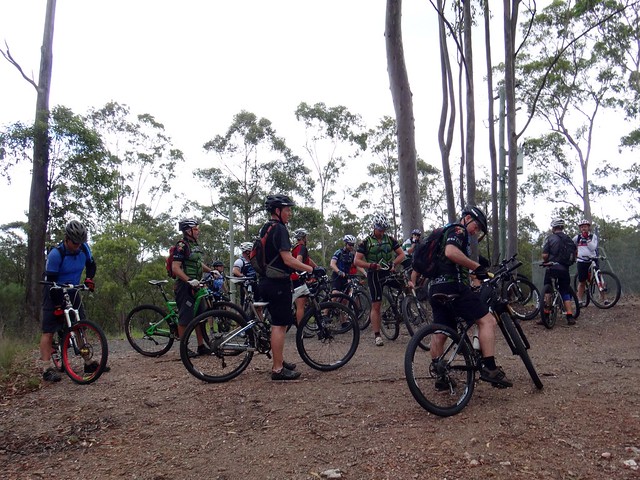 We often regrouped to make sure no one was left behind.

Our track followed Church Road before entering a dirt trail adjacent to Eatons Crossing Road. This steep dirt track took us all the way to Clear Mountain. 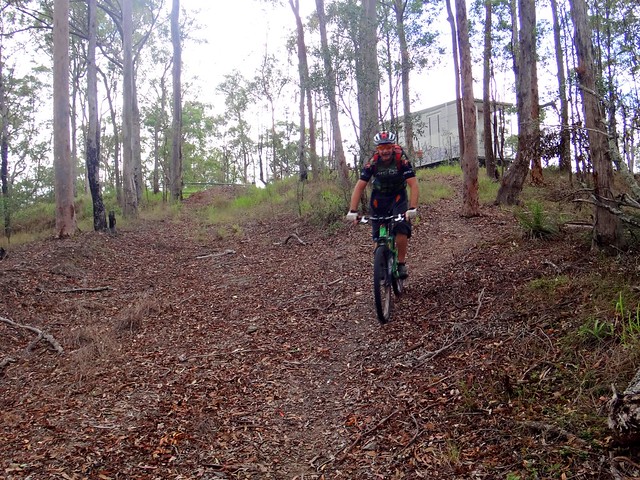 Neil Bang seemed happy to be riding his new Carbon Fibre “Pivot” bike on the trails. “Too happy”, thought someone, who decided to play a joke on him… 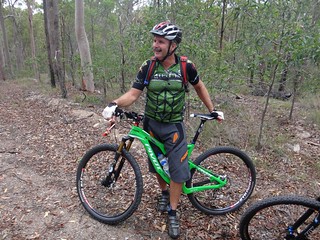 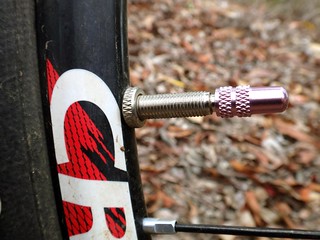 Some one had taken Neil’s tough looking “Hand Grenade” shaped valve caps, and replaced them with pink feminine ones.

I don’t think Neil felt that the pink matched the colors on his bike.

I thought they added a pretty touch. 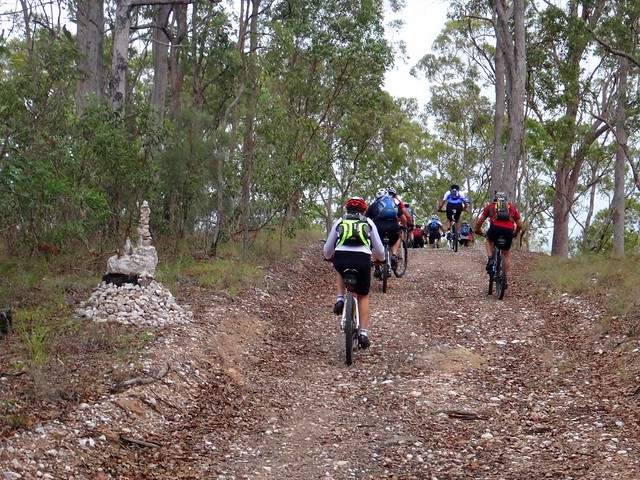 The playful banter came in handy. The trails were steep and it was a good excuse to stop and catch our breath while discussing the merit of girlie accessories on manly bikes. 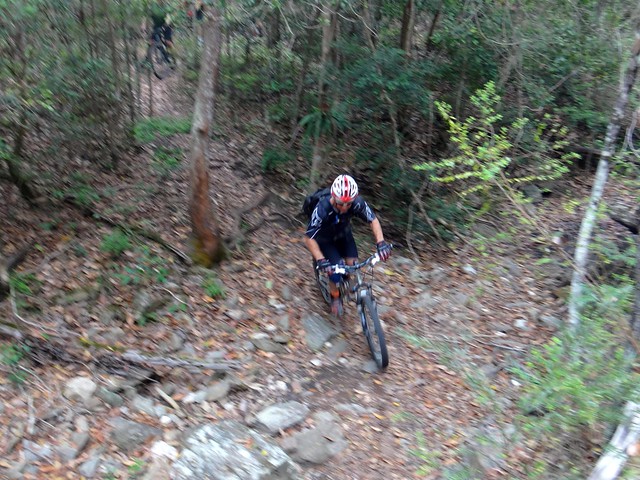 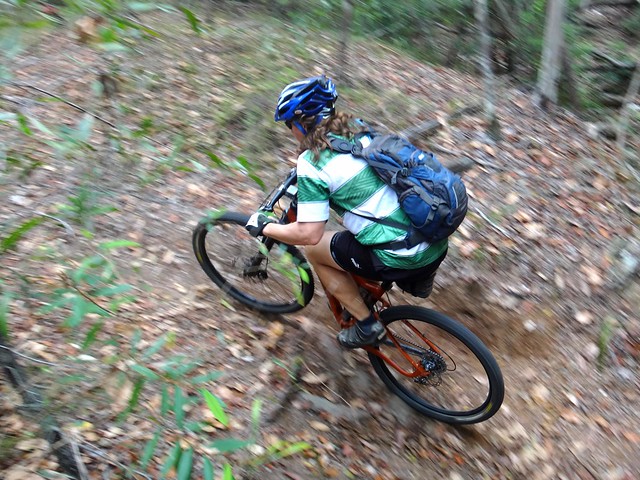 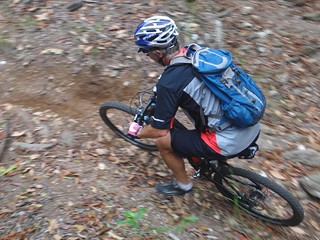 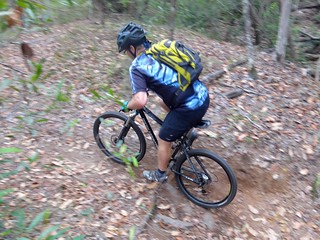 The steep trails gave way to some narrow single tracks which crossed a couple of challenging creek beds.

I ride these tracks about once a week. I was surprised how much better than I these guys were at nailing the technical sections. 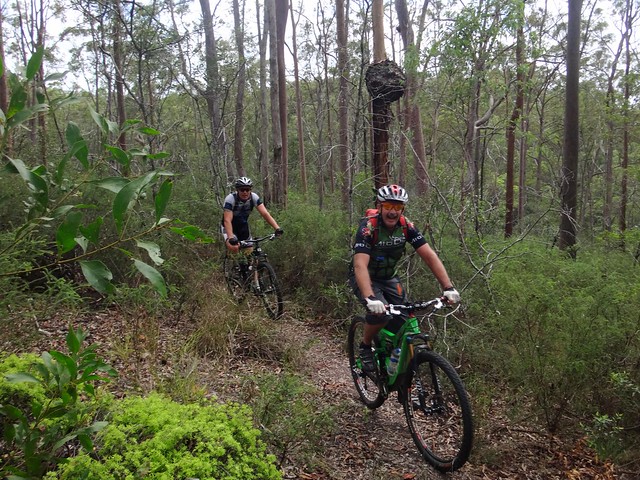 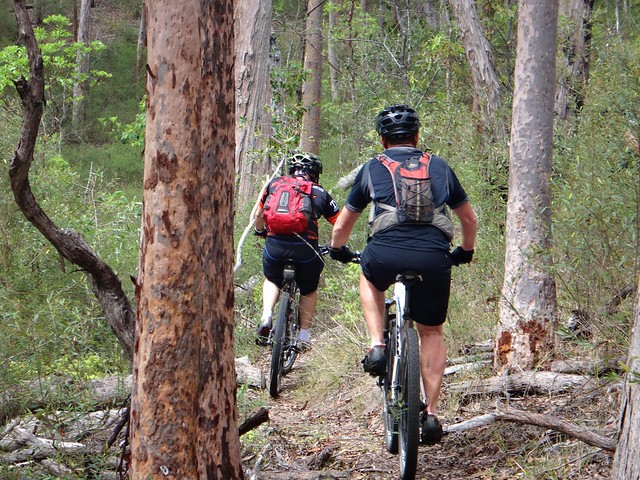 Despite the technical challenges, it’s still a beautiful forest to ride in. 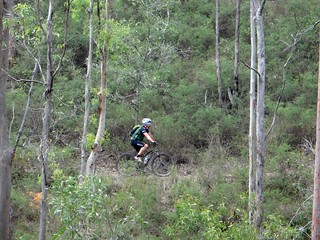 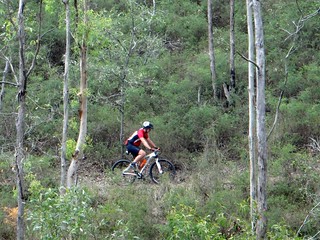 There’s not much single track at Clear Mountain, but it’s fun to ride and demands a lot of concentration. 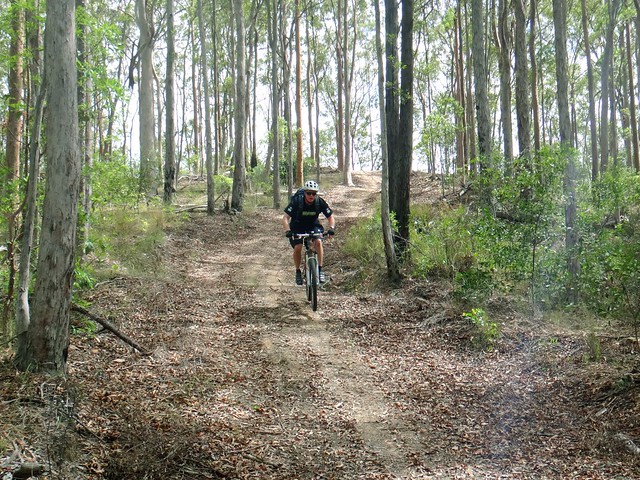 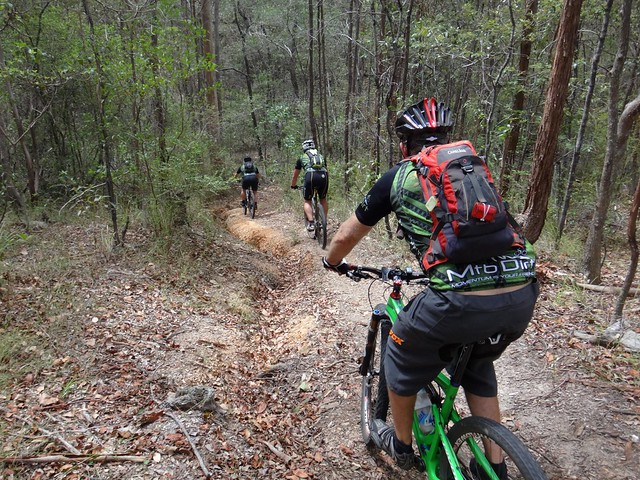 The steep descents demand a lot of concentration too.

I initially baulked at riding down this rutted ravine, but after watching a few friends do it, I decided to give it a go… and survived! 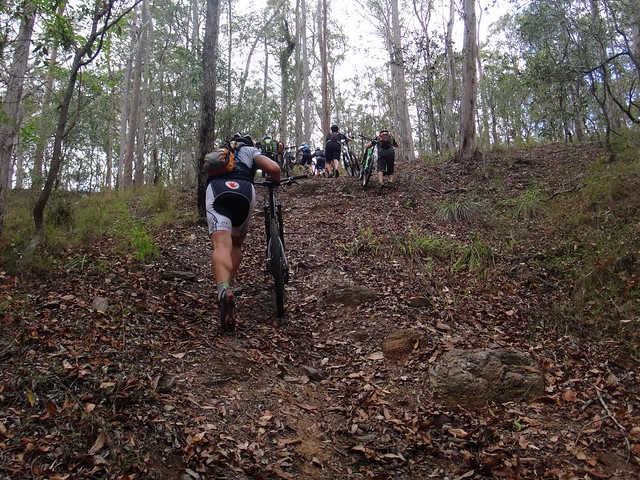 Perhaps the cruelest parts of Clear Mountain are the hills that are too steep to ride, and almost too steep to even push a bike up. 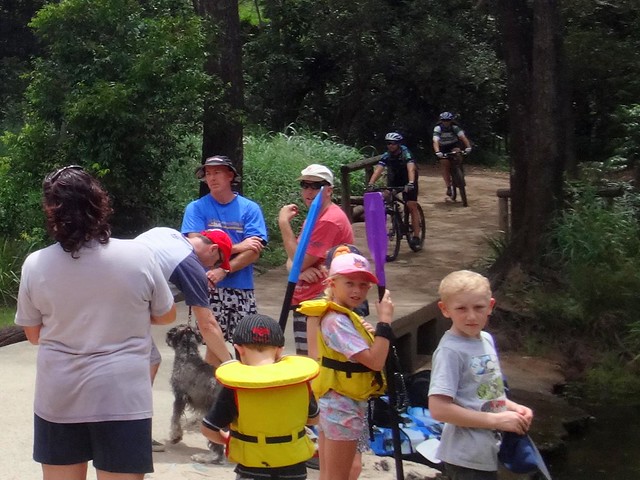 On our way back we followed the South Pine River again, passing happy families enjoying the water. 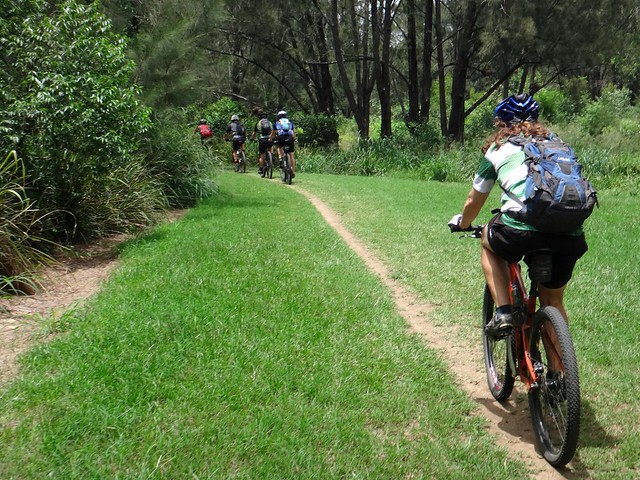 A few riders dropped off towards the end. It was a relief to nearing the end. 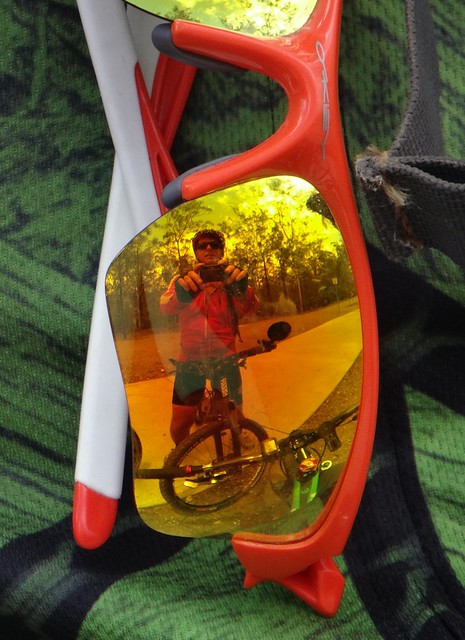 While I thanked Neil Bang for organizing the ride, I snuck in this quick selfie of my reflection in his sun glasses.

I burned 2,500 kcal in about 5 hours, including two hours of stops for rest and repairs (a few of us got flat tyres). I used up 3 litres of water, running dry just as we finished.

Even though it’s a short ride, I’d rate this one 9 out of 10 on the tough-o-meter. It’s hard work, and I wouldn’t recommend it in hot weather.

Thanks, Neil, for organizing the ride. Thanks, everyone, for the great company!

2 Replies to “Man vs Mountain”