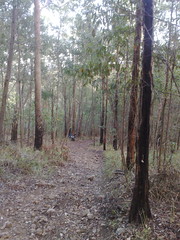 Mount Ninderry is one of the first monoliths you see when you turn off the Bruce Highway at Yandina and approach Coolum.

It’s about 360m high with a car park about halfway up.

I’ve seen it dozens of times on our many trips to Coolum, and eventually decided to check it out.

I cycled there this morning, and hiked to the top for some great views of the the coast and farmland around Coolum.

Some of the hills were a challenge.

After the hike, I discovered the dirt part of Ninderry Road which is a steep horse trail leading down the north-eastern side of the mountain. It was a lot of fun on the mountain bike – although I took it pretty slowly.

Then it was an easy ride along mostly dirt roads back to the main drag and home.

All up about 43km with maybe 520m of ascending (according to http://GPSies.com)

Our ride to Mt Nebo was a big one. We thought the climb up the mountain would be difficult, but it wasn’t. We thought the ride back down via Bellbird Grove and Camp Mountain would be easy, but it wasn’t. All up we travelled about 55km. I burned over 4,200 calories and drank copious quantities of sports drinks, and had a large “lunch” at about 10am at the Mt Nebo cafe.

I just want to say how much I admire my mate Simon. This was the hardest ride he’s ever done, and he just kept going – even when he was hurting and didn’t really want to go on at one stage. Even when we should have given him a break and taken a quicker route back to Samford from Camp Mountain. Simon – you’re amazing, mate. This ride brought home to me the important lesson that we do this because it’s fun. We don’t do it to set world records, or to be heroes, or to win races. And when riding in a team everyone in the team needs to look out for each other. So that’s going to be my #2 rule in future, after riding safely. 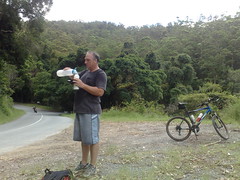 The Goat Track is a dirt road “short cut” from Samford to Mt Nebo. It’s one way – you’re only allowed to go UP the road, not down it. It’s pretty steep – but we overestimed the grade, and got up quite easily. The total climb up the track is just under 440m in about 5km. 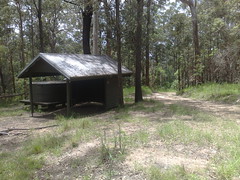 South Boundary Road was pretty difficult. The descents were rocky and the final ascent before rejoining the bitumen road is a killer. I had to walk part of the way because it was too steep. 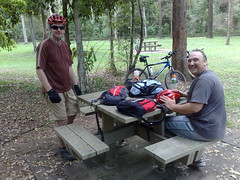 Bellbird Grove was deserted – which was unusual for a Saturday lunch time. There’s no drinkable water there, but lots of picnic tables, BBQ’s and shade. We rested here before trying to attack the fire road up Camp Mountain, which leans down into the Samford Valley. One of the many pony trails in the Samford Valley. One way to avoid the cars, but at the end of a 55km ride, the trails were hard work! Simon, Steve and I decided to combine two great off-road rides into one today.

First we rode along Browns Creek Road where my bike sunk in muddy water up to my axels and my feet got soaked. I’ve got into the habit of taking spare socks with me now, so the water isn’t so much of a hassle.

We came back along Smith’s Road and decided to detour down Dunlop Lane which appears to run through a horse riding ranch.

And finally we crossed the main road and ventured along some SEQ Water tracks near Lake Samsonvale, coming out at the McGavin View picnic area.

All up about 55km of MTB goodness, most of it off-road.

Young eucalypts close to the shoreline of Lake Samsonvale have been flooded by recent welcome rain…. An angry looking Brahman Bull looks at us as he protects his “girls”…. Me, my bike, and the Glasshouse Mountains…. Simon and his new bike…. Look carefully and you can see Moreton Island in the distance….

If you look carefully you can see some sailboats on the lake…. 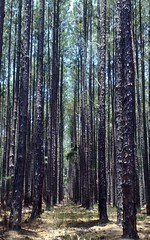 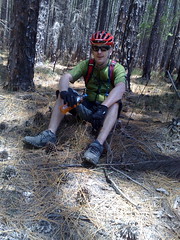 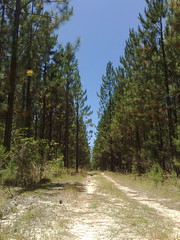 Between Donnybrrok / Toorbul and the Glass House Mountains, there are hundreds of square kilometres of pine forest and dirt tracks.

Some of the tracks are beautiful smooth gravel.

Others are diabolical sand and deep ruts, that stretch on for ages and have you groaning “Are we there yet?”

All in all – a fantastic time on the mountain bikes.

But as Steve and I found out – riding for a few kilometres on sand and through deep tyre ruts is exhausting work! 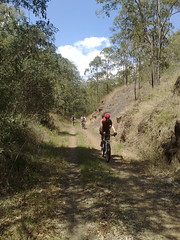 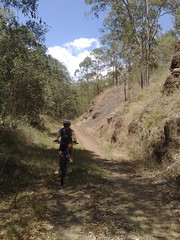 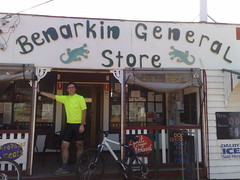 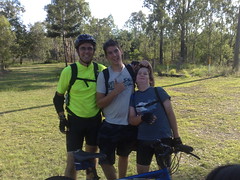