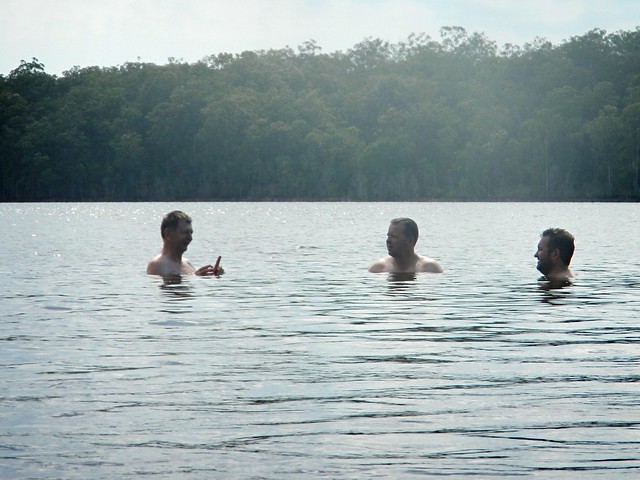 Lake Samsonvale is a large body of water west of Strathpine with a fascinating history. Today I explored the far side of the lake, near Kobble Creek with my friends Russel, Jason and Paul. 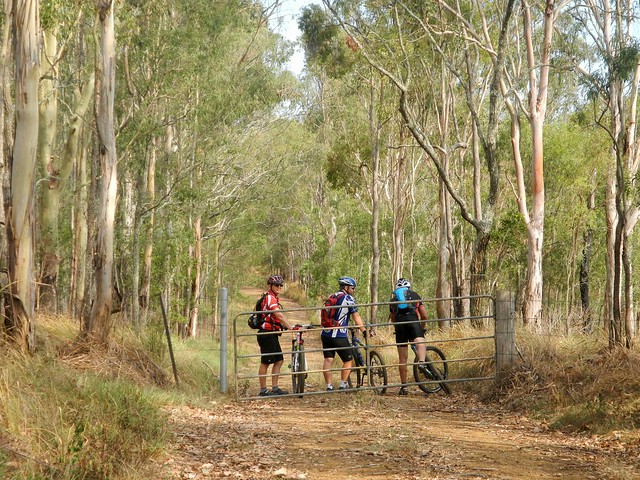 We started at the western end of Whiteside Road, and just kept heading east towards the shoreline. This road used to be the main route between Petrie and Dayboro before the North Pine Dam was built. But the resulting artificial lake permanently flooded the road, which split Whiteside Road in two. This meant that a new road (Dayboro Road) had to be built further north. The eastern section at Whiteside is still an important road for local residents, but the western half has been transformed into a very quiet road which devolves into a disused gravel road before disappearing under the waters of the dam. 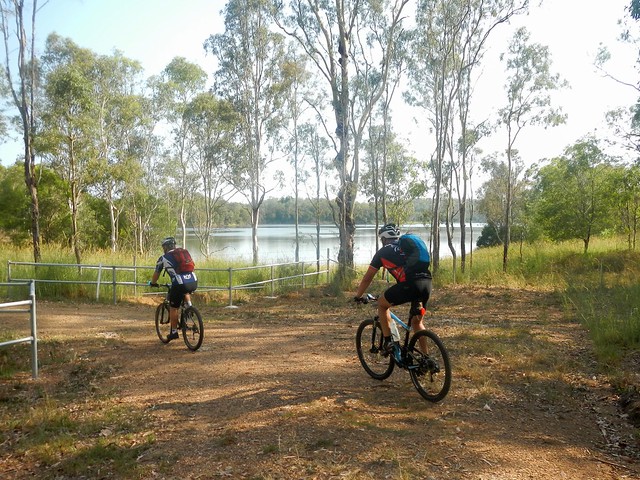 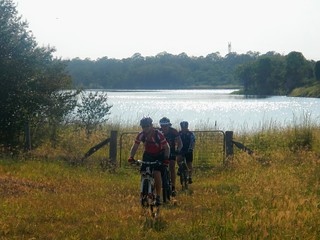 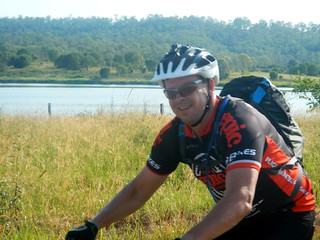 Whiteside Road crossed the North Pine River at a place called Quinns Crossing. Although the crossing is submerged we were able to ride within a couple of hundred metres of it. I’ve been told by local recreational sailers that in times of drought it’s possible to see the remains of the old bridge just under the water. 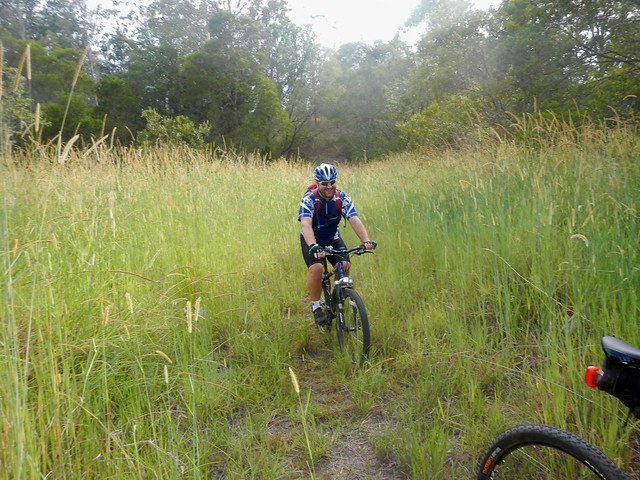 Some of the grass in the area is pretty long. I thought it was nice that the guys agreed to follow me through the grass even though they couldn’t see the ground in front of them. 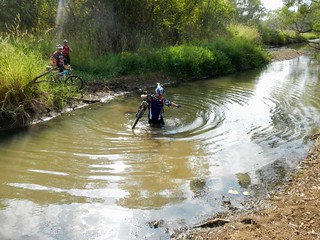 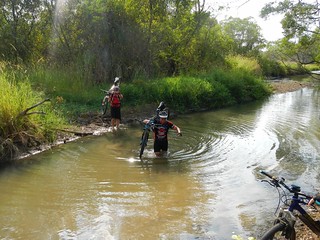 This creek was too deep to ride across, or even push the bikes across, so we had to carry them, while taking care not to slipp on the muddy bottom and get soaked. 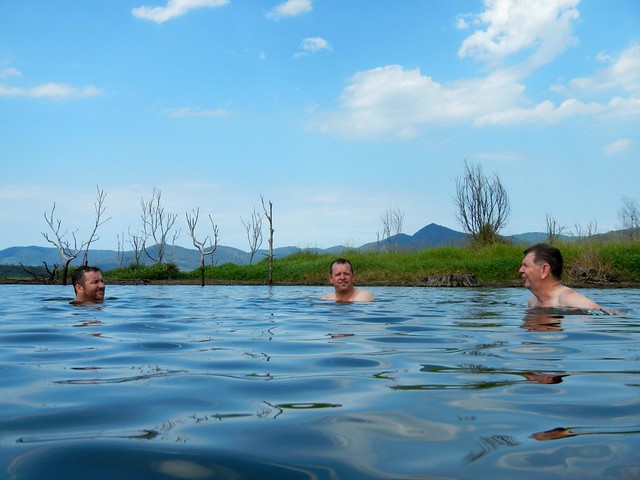 We eventually found a spot by the edge of the dam where we could enjoy a cool swim and take refuge from the 35 degree heat.

We swam quite close to the submerged spot where Isabella Joyner built Samsonvale House in the 1860’s. 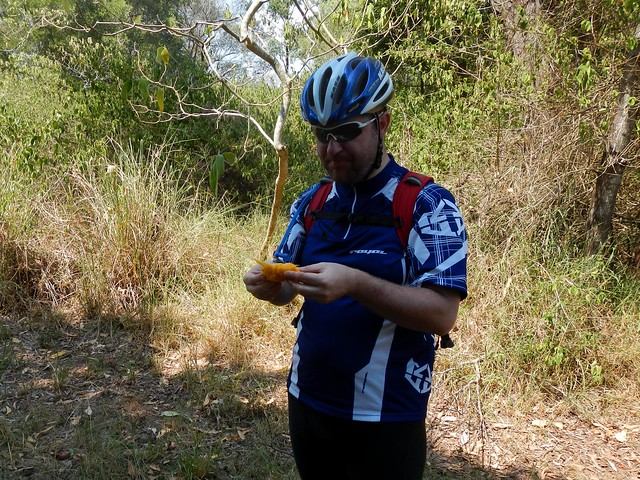 Even though Samsonvale House is gone, we were able to sample some mangoes from an old tree that was planted not far from the house in the 19th century. Paul thought they were delicious! 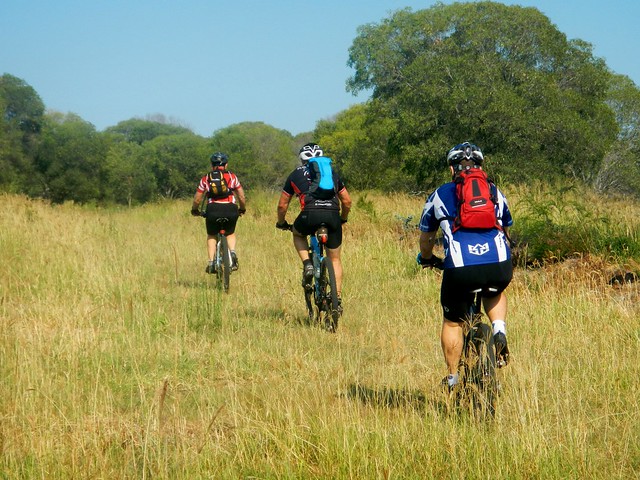 All up we rode about 30km in about three and a quarter hours, including stops and breaks. For most of the ride we kept an easy pace in the heat, and just pushed the pace a bit on the way back the steep bitumen climb on Postman’s Track. Considering the high temperatures I’ll rate this one 8 out of 10 on the tough-o-meter. In cooler weather it would probably rate 7 out of 10.

One Reply to “Underwater History”