Yielo Station is a large property on the edge of the Conondale National Park which was settled during the Jimna gold rush in the 1860’s. Today’s adventure took us on several unusual loops through Yielo as we explored different tracks that we could use in an upcoming social ride.

To allow us to cover more ground, Eric drove us to the top of the range in his car, then picked us up at the bottom a couple of times, dropping us back up on Sunday Creek Road so we could check out several different trails.

This meant we did a lot of riding downhill without having to push up hills. What a lazy day 🙂 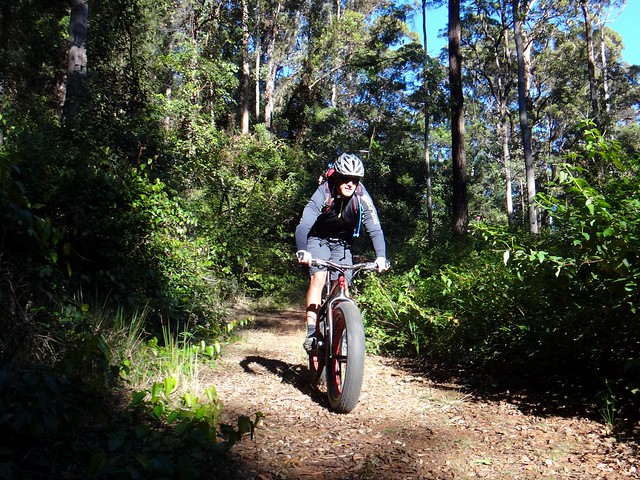 Our first downhill run was along Langston Road. This 4km fire trail runns through the forest dropping 200m in elevation towards Yielo Station. 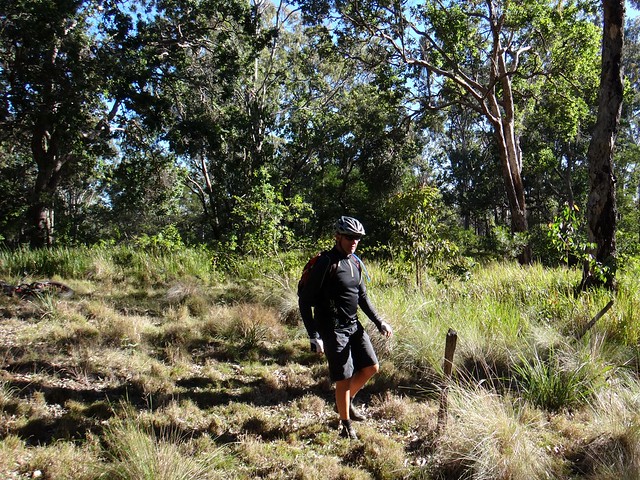 We heard that there were remnants of an Aboriginal Bora Ring towards the bottom of the road, so Paul and I had a look at one or two places to see if we could find it. Because the area is so hilly, there aren’t many wide flat places that could hold a Bora Ring. We think we found it about two or three hundred metres from the bottom of the hill. 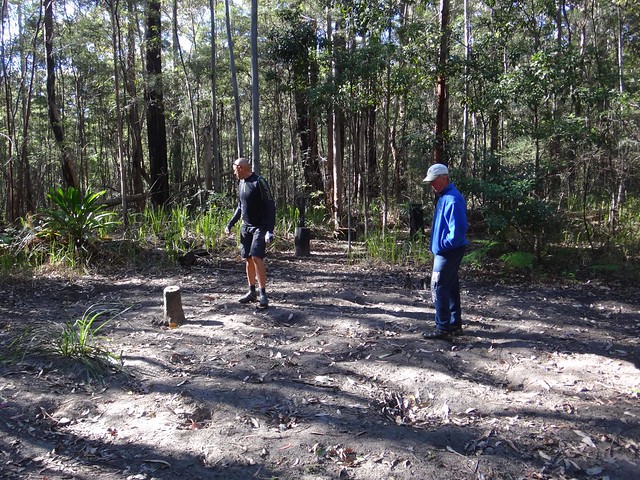 On the way back up to the top of the range, we stopped at the Environmental Education Centre to look for Stumpy Green’s Hut. I mentioned the legendary old Gold Prospector last week. All that remains of his hut is a few burnt stumps and a clearing in the forest. Judging from the small holes in the ground, it looks like a few fossickers have visited the ruins and had a dig around in the hope that they might find a few old nuggets that Stumpy could have left behind. Somehow I doubt someone with as much experience as Stumpy would have been so careless with his gold. 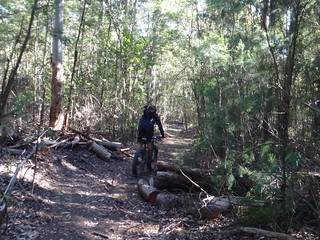 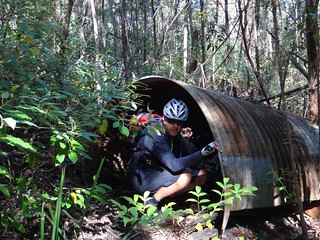 The track past Stumpy’s hut winds through the forest along side the ruins of an old humpy, a rusty old truck, and numerous fallen trees. 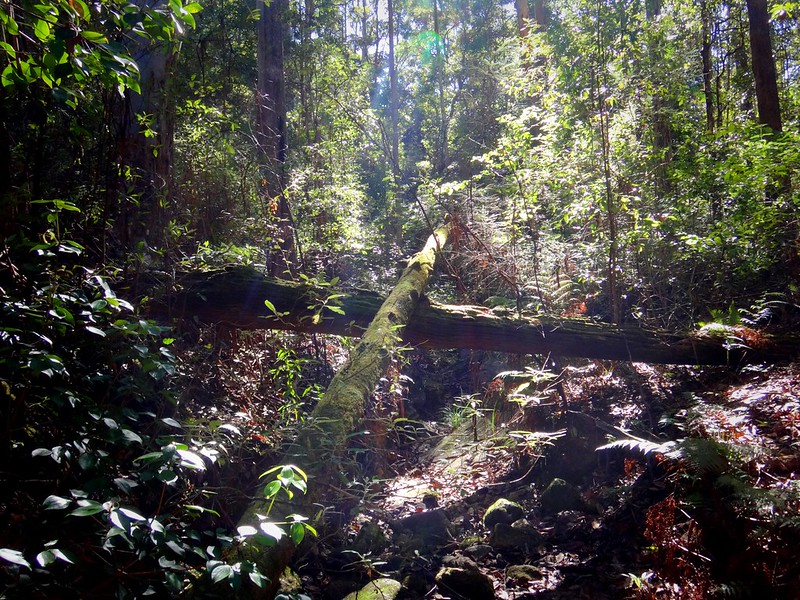 After about a kilometre it crosses Gigher Creek which was a popular place for alluvial gold seekers in the 1860’s. After rain they’d sit by the creek, meticulously swirling mud in their pan, in the hope that they’d find a few flecks of the precious yellow metal. 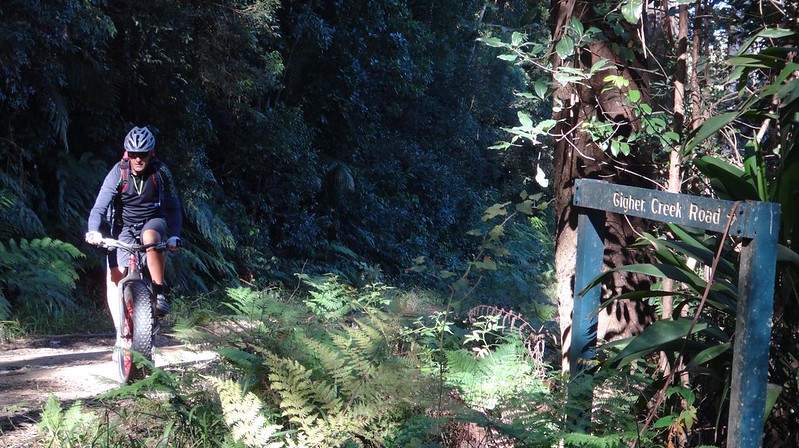 Eric dropped us off a second time, higher in the Conondale Range at Gigher Creek Road near Mount Rollman.

This 6km descent drops over 300m down the hill towards Yielo. It was a longer faster descent than our first downhill run. 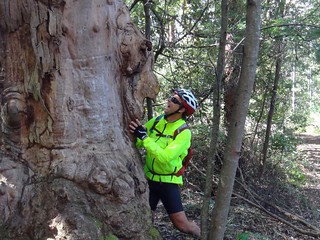 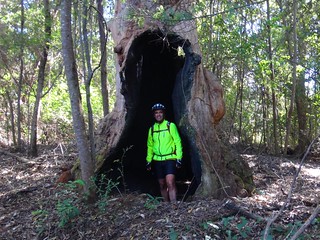 On the way down I couldn’t resist stopping at this burnt out old stump which had a “face” on it that resembled a lion’s head. 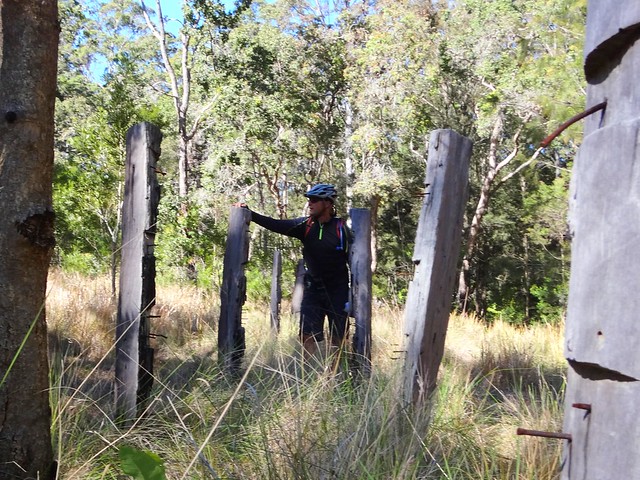 We had a look at a well-used campsite half-way down the road close to the creek which is popular with amateur gold fossickers today. 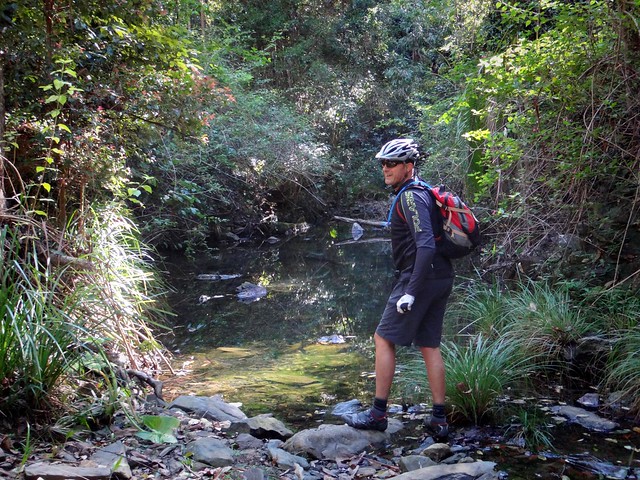 Gigher Creek doesn’t have much water in it at the moment, which explains why no one was panning for gold today. 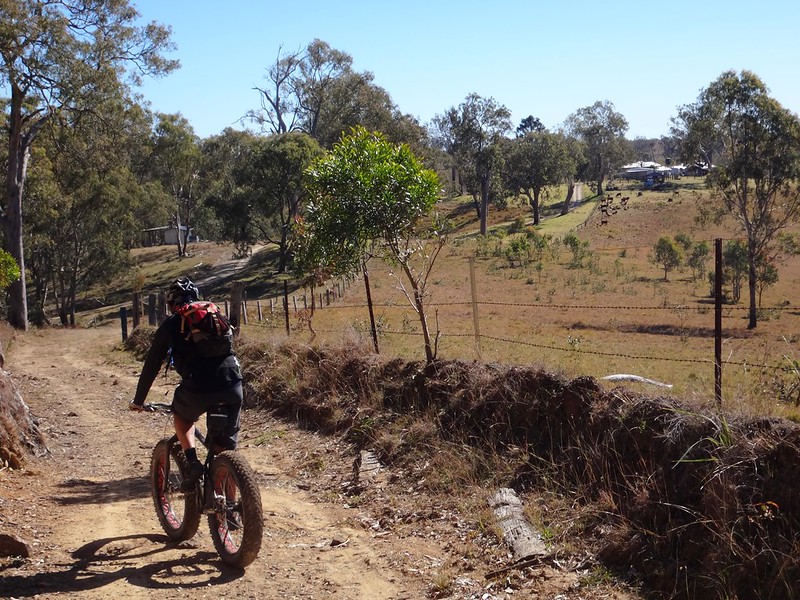 Eric was waiting for us again as we rolled out at the bottom of the hill near Yielo Homestead. We packed the bikes in the car and headed back up the hill a third time.

“I’m starting to get a sense of Deja Vu”, Eric muttered as we trundled back up the range. 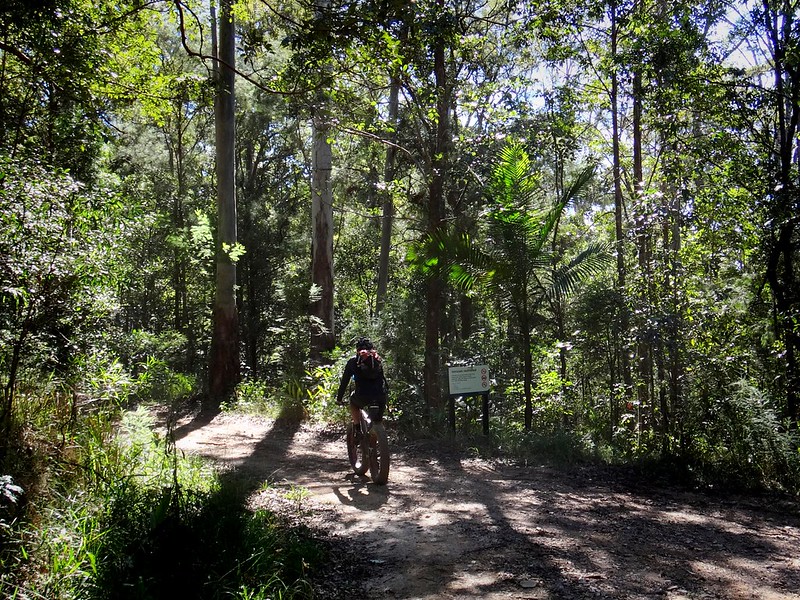 The third and final descent was down Summer Mountain Road.

This was the longest and prettiest of all of today’s downhill runs.

At this point we said good-bye to Eric, and arranged to meet back in Jimna in a couple of hours, about 20 kilometres away. 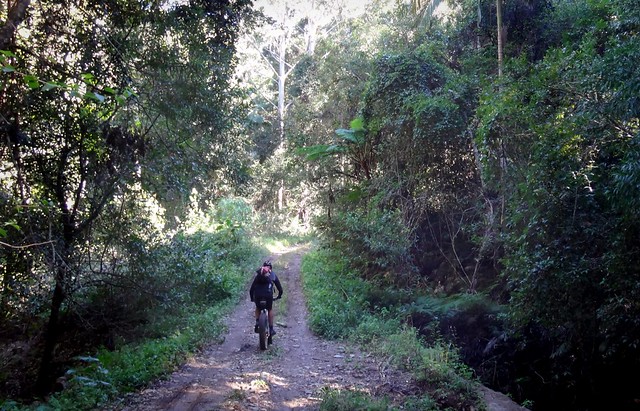 Summar Mountain Road undulates for over 5km through dense rainforest as it drops over 550 metres. It’s a long way down, and a lot more fun riding DOWN than it would be riding UP. 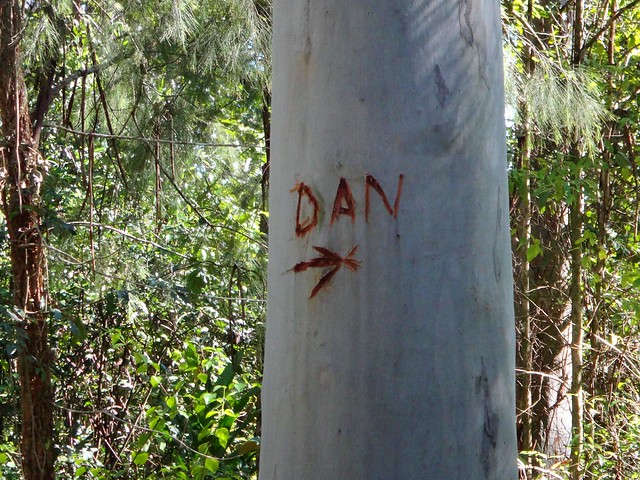 Because this road was a last-minute suggestion by Eric, I didn’t have a GPS route of the track. The plan was basically to follow the road to the bottom of the hill.

Unfortunately we reached a T-junction and weren’t too sure whether to go left or right.

Someone suggested that “Dan” should go right.

My instincts suggested left was closer to our desired destination, so we left Dan to his own devices. 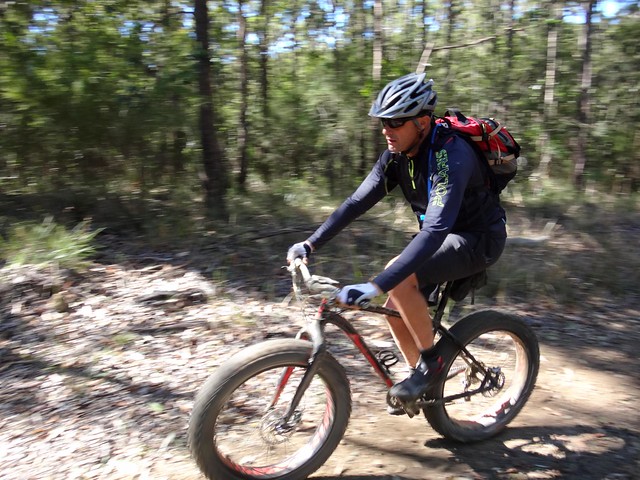 As we rushed down this hill, the forest started to look familiar.

“I’ve been here before”, I told Paul.

Then I realized we’d ridden some of these trails over a year ago when we visited Summer Creek.

Although it was fun to revisit the site of past adventures, it also meant that we were a lot further east than Eric had intended us to be when he dropped us off. We had further to go than we had anticipated. 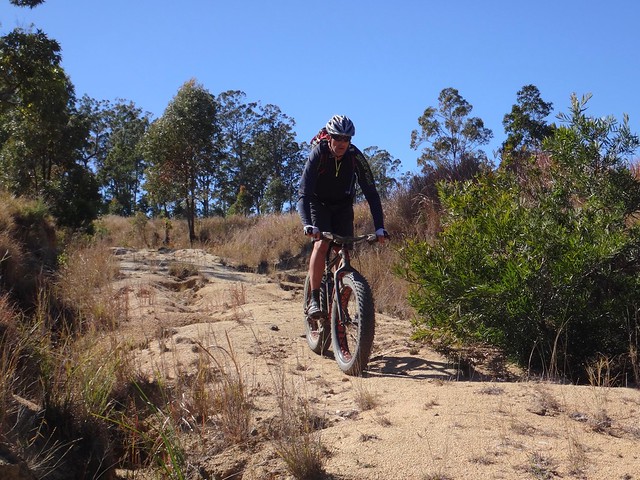 We emerged from the forest at the end of McAulays Road. “Road” is a bit of an exaggeration. It’s rough, rutted and hilly. It would be very difficult for any sort of vehicle to pass through here – except for perhaps a horse, or a mountain bike 🙂

The wide open spaces of Yielo Station were a stark contrast to the dense forest we emerged from a few minutes earlier. 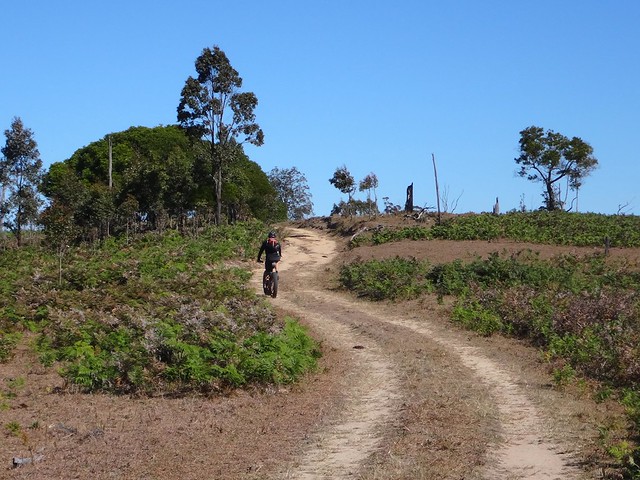 Although we didn’t have a GPS plot, we just followed the track west. It became easier to ride the further we progressed. 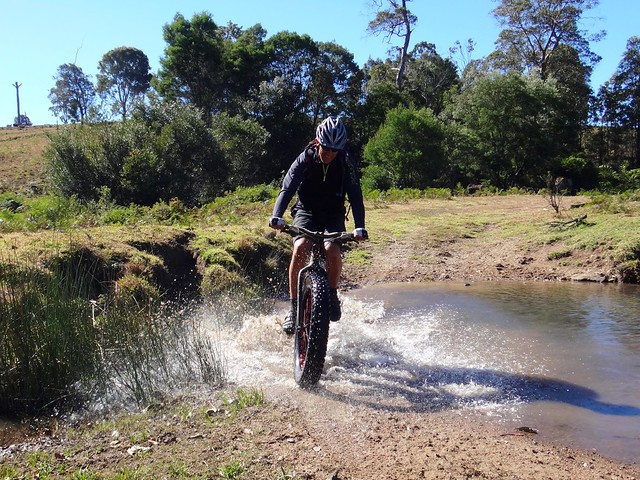 Despite the dry weather, we still got our feet wet as we rode through a couple of creek crossings. 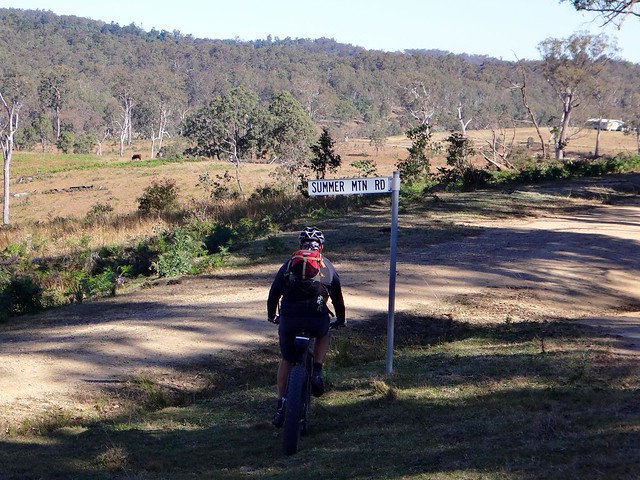 Eventually we reached Summer Mountain Road again. I think this was where Eric had intended us to emerge in the first place. It was just a little further than we anticipated. 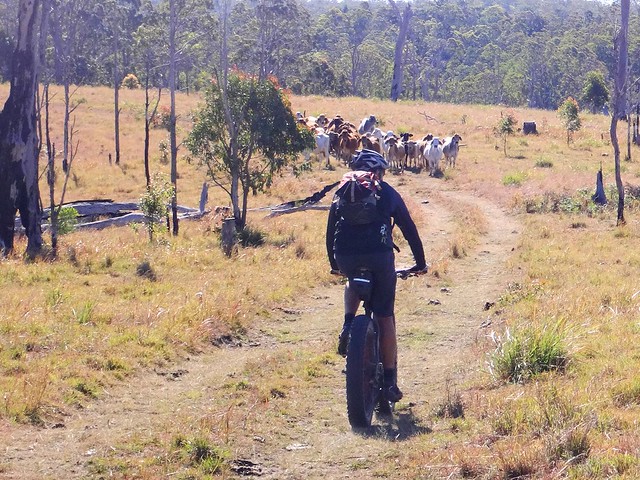 We rode through several paddocks past herds of bewildered cattle who watched briefly then thundered off in a cloud of dust. 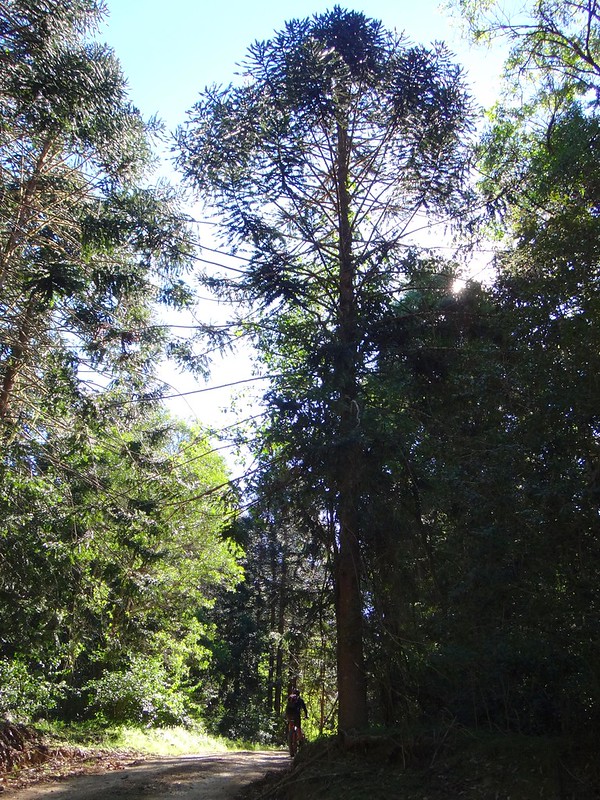 As we rejoined the state forest, we found ourselves in a plantation of Bunya Pines (Araucaria bidwilli). It’s rare to see so many of these wonderful trees in the same place. This was an experimental plantation established by Queensland Forestry several decades ago amidst larger plots of more common Hoop Pines. The maps say that deep in heart of one large plot of Bunyas there’s another Aboriginal Bora Ring. I could see the ring on the maps, but the terrain looked way too rough to attempt it on a bike.

So we just enjoyed the trees instead. 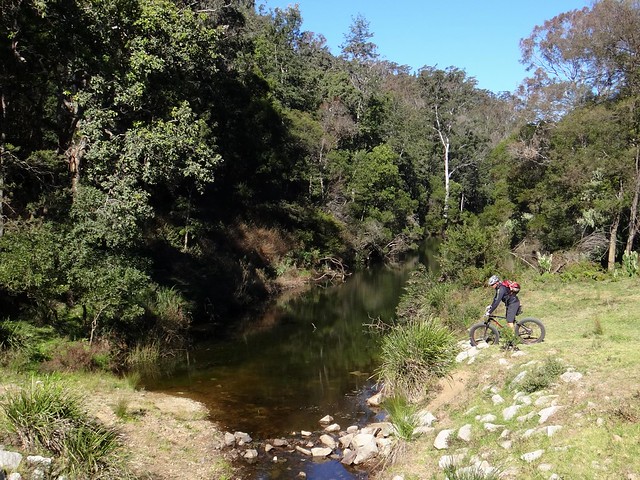 We crossed Yabba Creek as our straight track through the forest brought us back to Jimna surprisingly quickly.

This was an easy day on the bike because of the assistance we received from Eric driving the support vehicle.

Thanks Paul and Eric for another fun day on the bike!