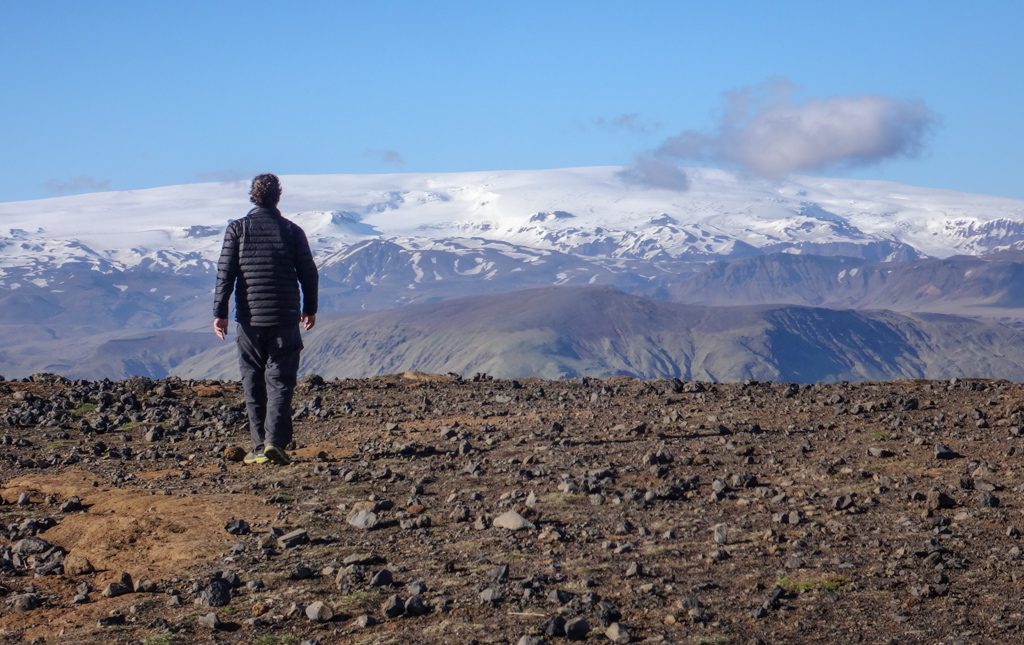 Mýrdalsjökull is a large icecap in the south of Iceland that sits on top of an active volcano.  Liz and I wanted to spend a day exploring this beautiful natural wonder..


Mýrdalsjökull (pronounced “MEER tals yerktl”) means “Mud valley glacier”.  The old norse and english words are similar: “Mýr” / “mire” and “dals” / “dale”.  Icelandic is strangely familiar like that.  When an Icelandic person speaks, you hear echoes from our common viking past, over a millennium ago.

Like large frozen tongues, gigantic rivers of ice slowly descend from the icecap, carving out large U-shaped valleys in their path.  One of those glaciers is Sólheimajökull.

Apart from its size, the thing that surprised me most about the glacier was that it wasn’t white.  Volcanic ash covers much of the ice, creating an odd monochrome landscape with jagged sawtooth ridges.

On the edges, the ice slowly melts, and the trickles gradually join into streams and then raging rivers.

I wanted to touch Sólheimajökull while I could.  It is rapidly shrinking due to climate change, and has retreated over a kilometre in the last decade.  Who knows how much of it will remain in a century?  But it is here today and I held part of it in the palm of my hand.

For the record, it felt cold, wet, and gritty 🙂 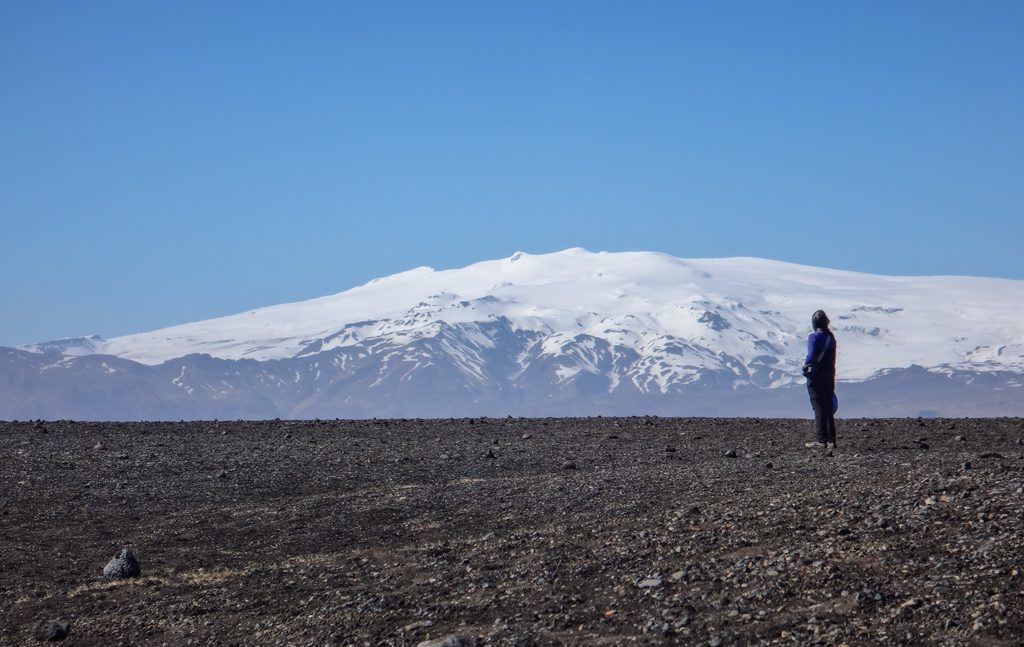 After getting up close and personal with Mýrdalsjökull, we drove a few kilometres away to get a better perspective.

Vast coastal plains beneath the glacier have been flattened by thousands of years of regular volcanic floods.  The result is an endless expanse of dark rocks and black sand. 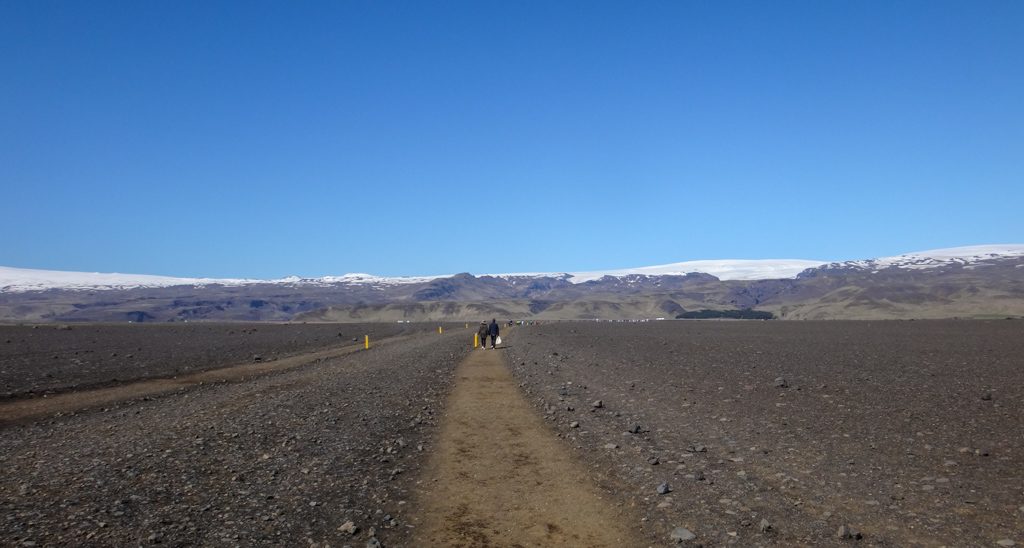 As we drove past we spied dozens of cars parked by the side of the road, with a stream of people wondering off across the plain.

“It must be good,” we thought to ourselves, and followed the crowd, not knowing where we were going. 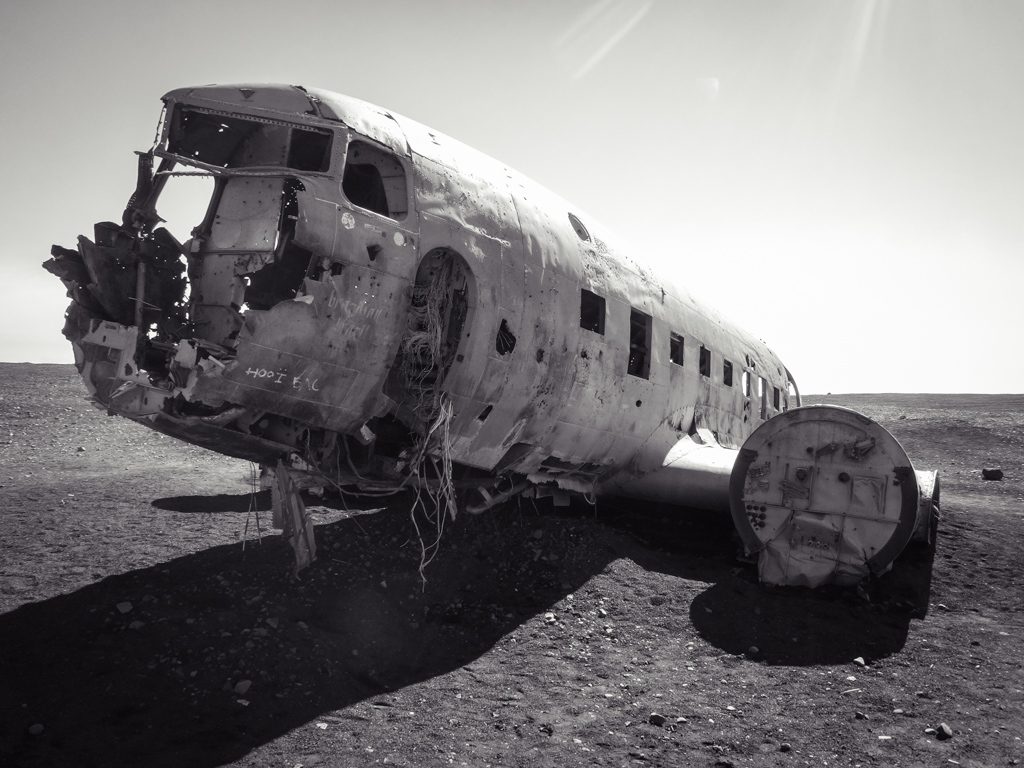 About three-quarters of an hour later we figured out what everyone had come here to see.

Out in the middle of the dark sandy plain sits the wreck of an old US DC3 aircraft that crashed here in the 1950’s.

It’s a seven kilometre round trip from the car park to the wreck, and took us about 90 minutes.

Icecaps and volcanoes affect the surrounding landscape in a variety of ways.

A little further down the road we arrived at Reynisfjara near the southernmost point of the country, and hiked up to the cliff tops where we could see the black sand beach.

We just stood and stared – this was amazing.

The stunning black sand is volcanic in origin, as are the basalt columns that sprout from the ground.

It’s a popular nesting spot for Puffins and Gulls which swirl around the cliff tops in the breeze.

It’s not a good idea to walk or ride a fat bike along that beach.  The tides are unpredictable, and the rough seas regularly claim the lives of unsuspecting tourists who are accidentally washed out to sea.

As we looked along the coast in the opposite direction we spied some more odd volcanic formations. 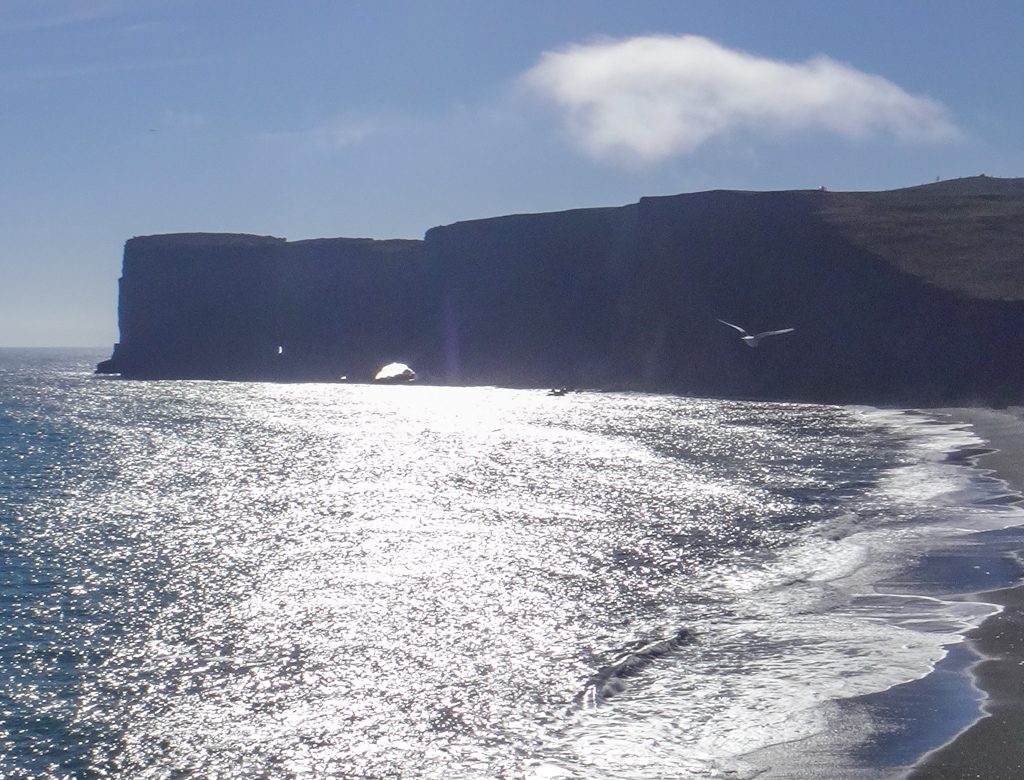 Dyrhólaey literally means “Island with the door hole”.  In the distance, sunlight sparkled behind this unusual arch in the cliffs.

While we watched the sea birds hover in the wind, I wondered if we could get to the top of Dyrhólaey – what would the view be like up there…

A short drive later we stood atop the “Island with the door hole”.  The black beach stretched to the horizon.  On our right, snow sparkled atop Mýrdalsjökull.

To the south, the Atlantic Ocean stretched uninterrupted all the way to Antarctica on the other side of the planet.

What an amazing place! 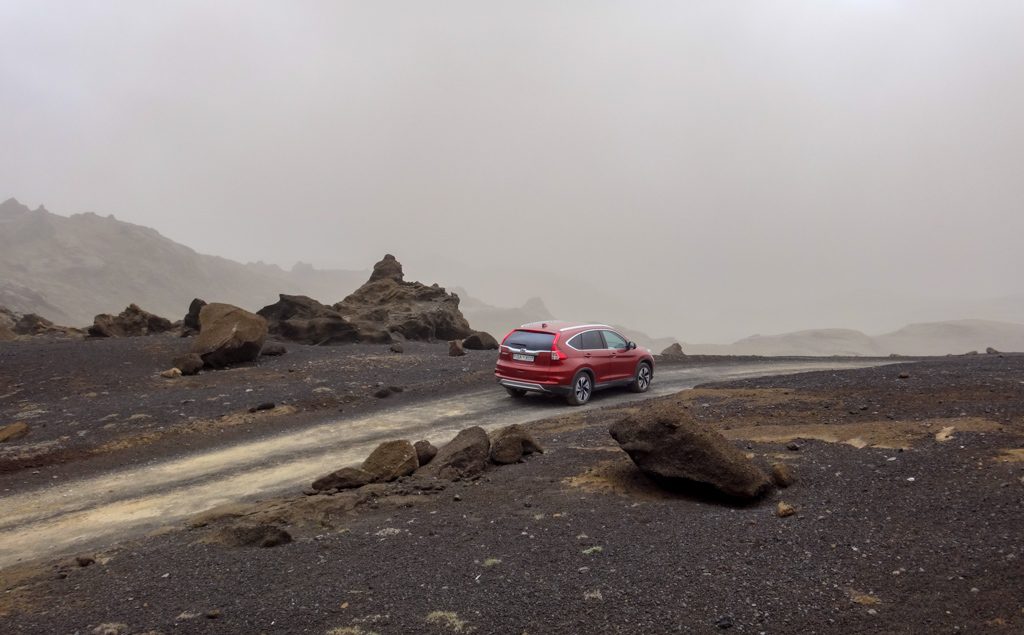 We left the coast and followed a dirt road beside a river up a valley towards a place called Þakgil (pronounced “THACK gill”).  I had read about it online and was curious to have a look.

There was very little vegetation.  The strong winds whipped up volcanic dust.  As we drove, I heard thousands of “pings” on the outside of the car as the sand bounced off the paintwork, and was glad I had taken out “Sandstorm Insurance” when I hired the car. 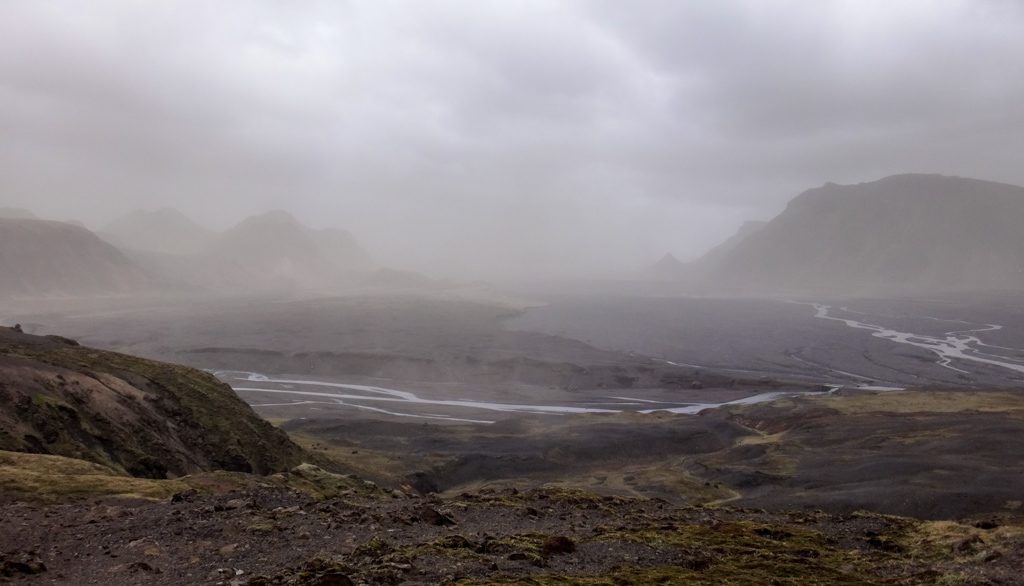 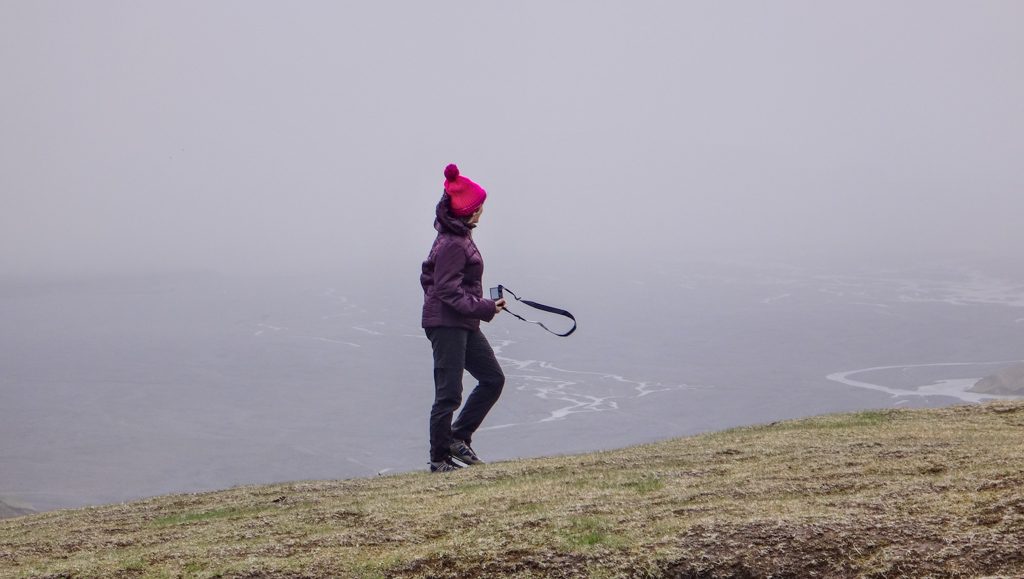 Repeated floods from the glacier have created a vast outwash plain called Mýrdalssandur. We drove into this plain.  Near the coast it stretches for over thirty-five kilometres wide – vast, dusty and overwhelming. 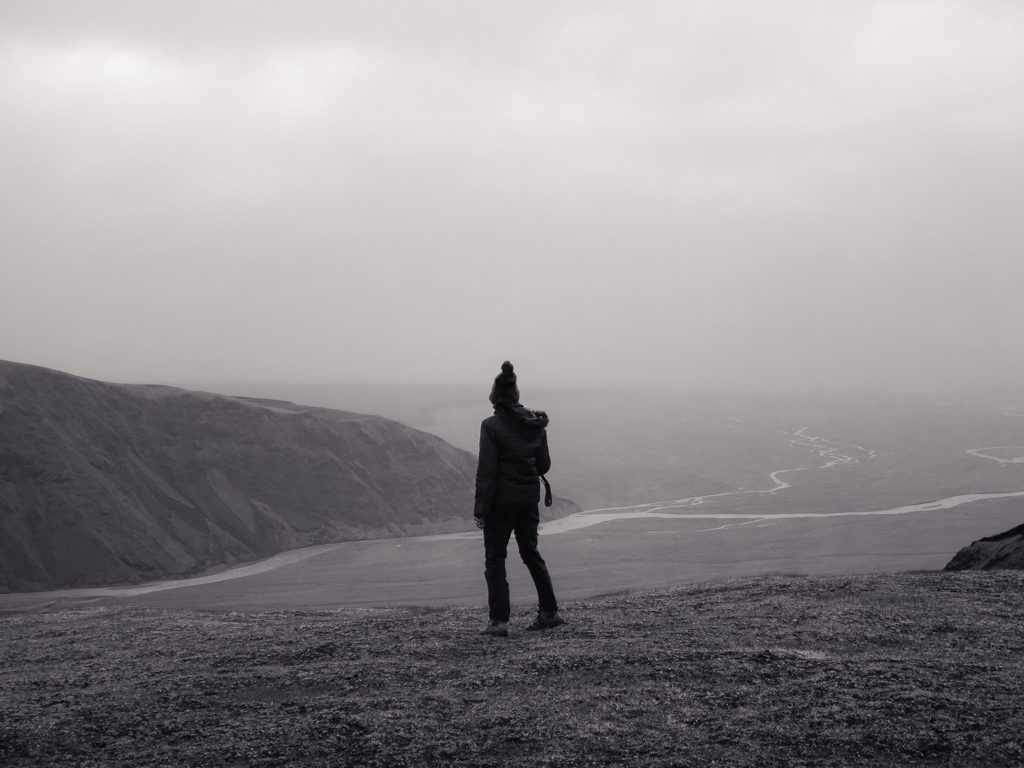 We stood atop a hill and watched the water of the Múlakvísl river fan out over the outwash plain on its way to the ocean.  The air had an eerie red tinge to it from the dust.  The cold wind howled in our ears.

A century ago, Eirikur Steingrimsson was washed away as he tried to ride his horse over this river when it was in flood.  His friends thought he had died, but Icelanders and their horses are a hardy bunch – Eirikur woke up, grabbed his clothes and continued on his journey.

These days there are long bridges over the river and its flood plains,  so no one ever has to ride their horse over it. 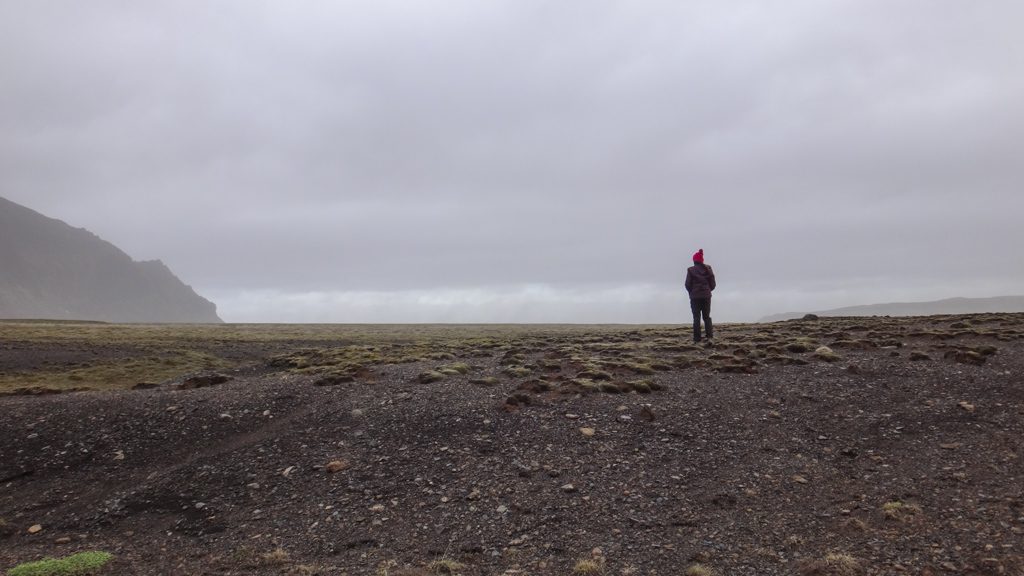 We descended the hill and went onto the plain.

It’s awe-inspiring to stand in the midst of such vastness.

The cold wind howled.  I got out of the car and leaned into it.

On a nearby hillside, the swirling ochre colours of sedimentary layers gave the illusion of being painted by someone. 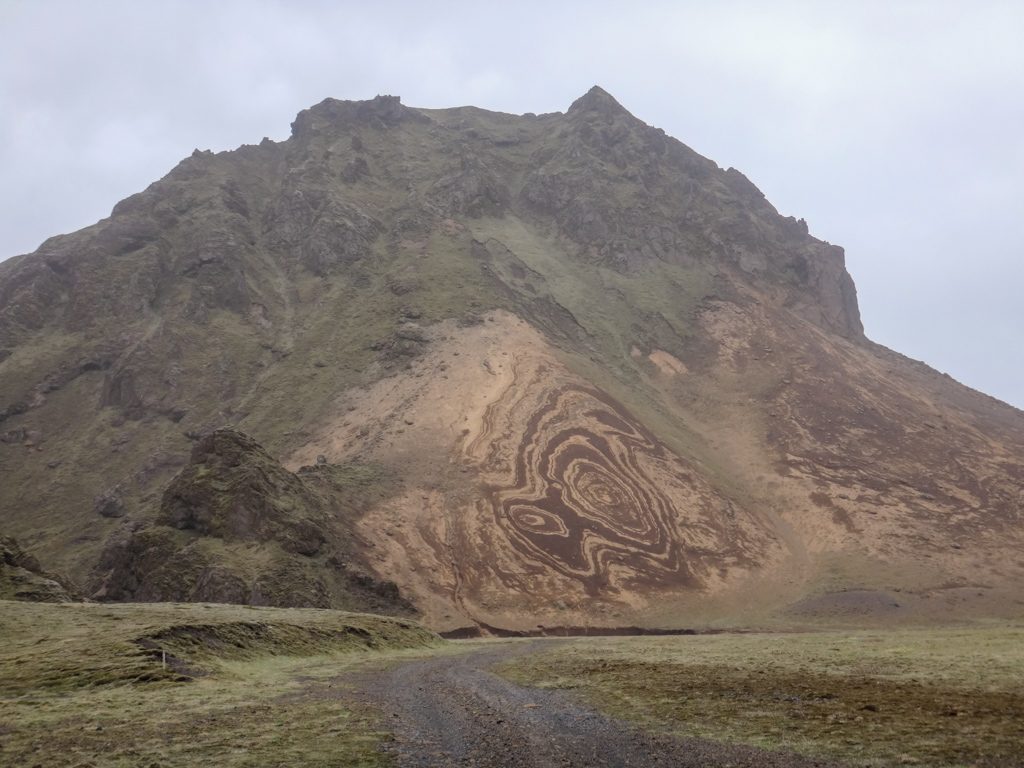 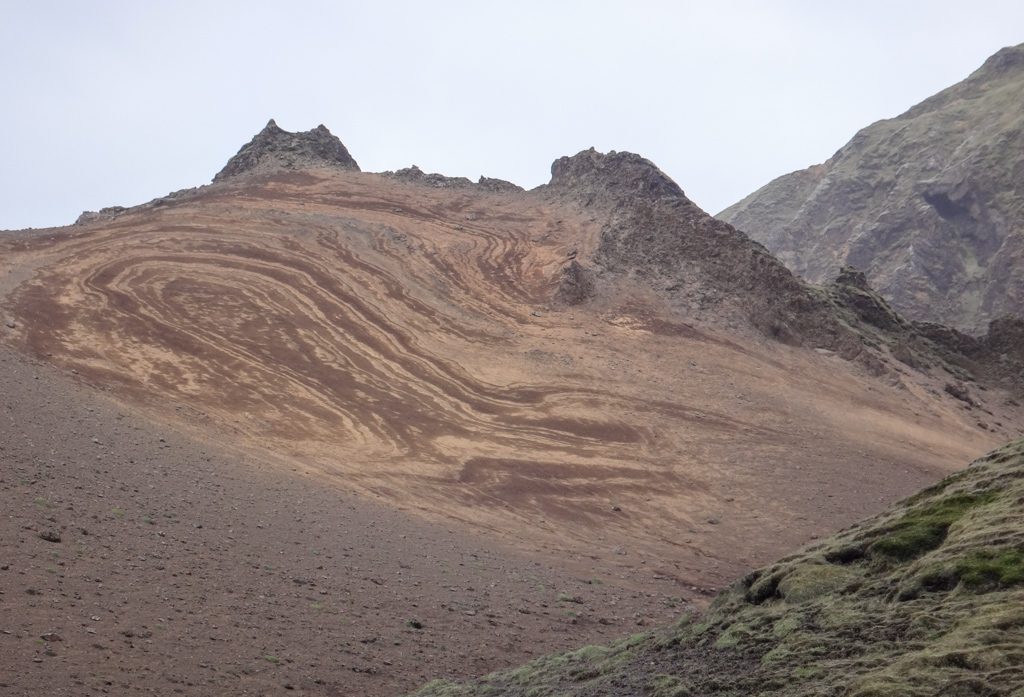 “That one looks like an aboriginal Wandjina” I commented to Liz 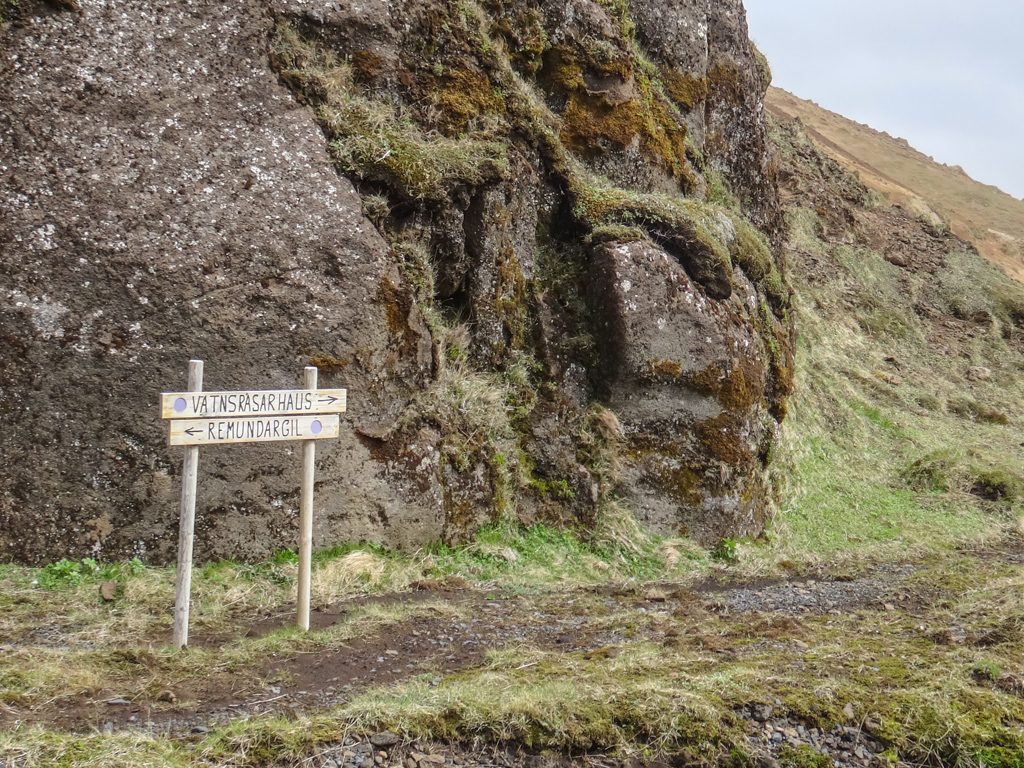 The dirt roads are not well-marked, so I was grateful for whatever signs we encountered along the way. 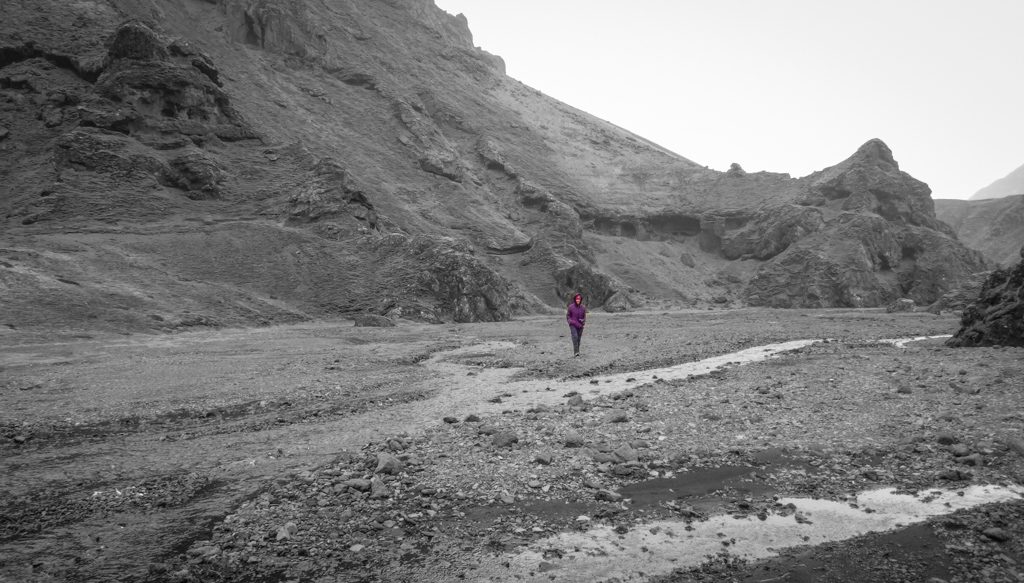 Remundargil Canyon was tucked away between jagged hills.  We parked the car and slowly wandered in.

It’s a raw, intimidating place.  I wouldn’t have been surprised if a Viking had approached me out of the dusty shadows.

Liz looked out across the valley while I disappeared to the other side.

I tiptoed over a stream in search of waterfalls. 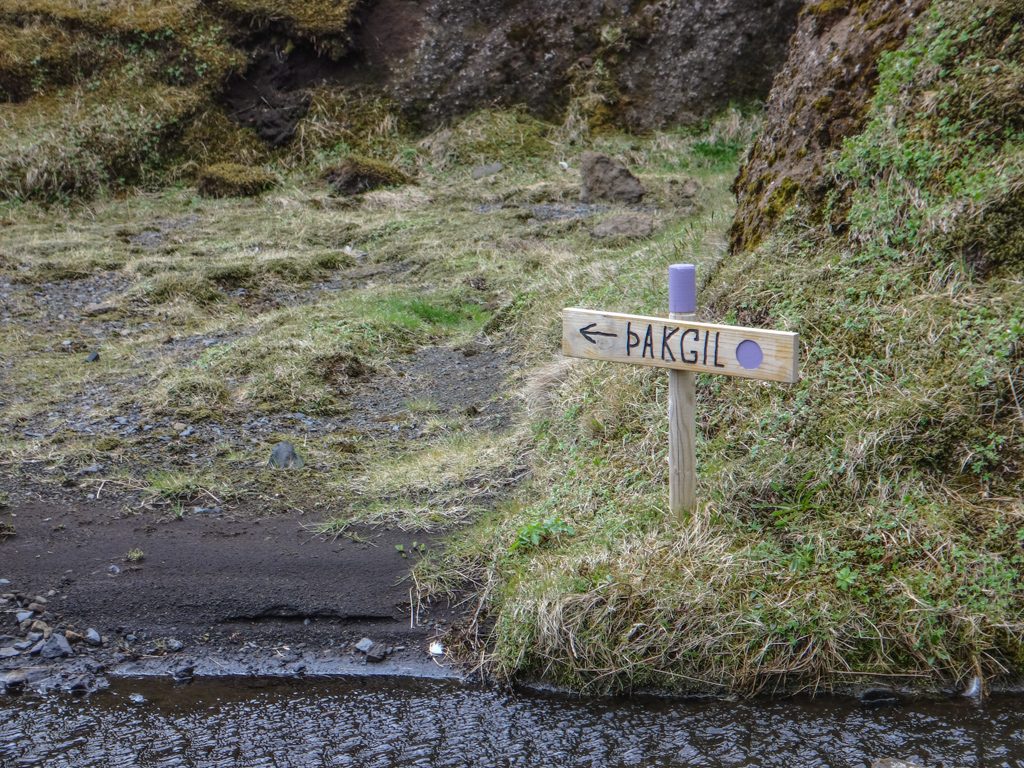 We spent almost an hour exploring Remundargil, and could have easily stayed longer.   There are tracks and canyons leading off in all directions.

But there was more to see in a valley around the corner, so we followed the signs to Þakgil. 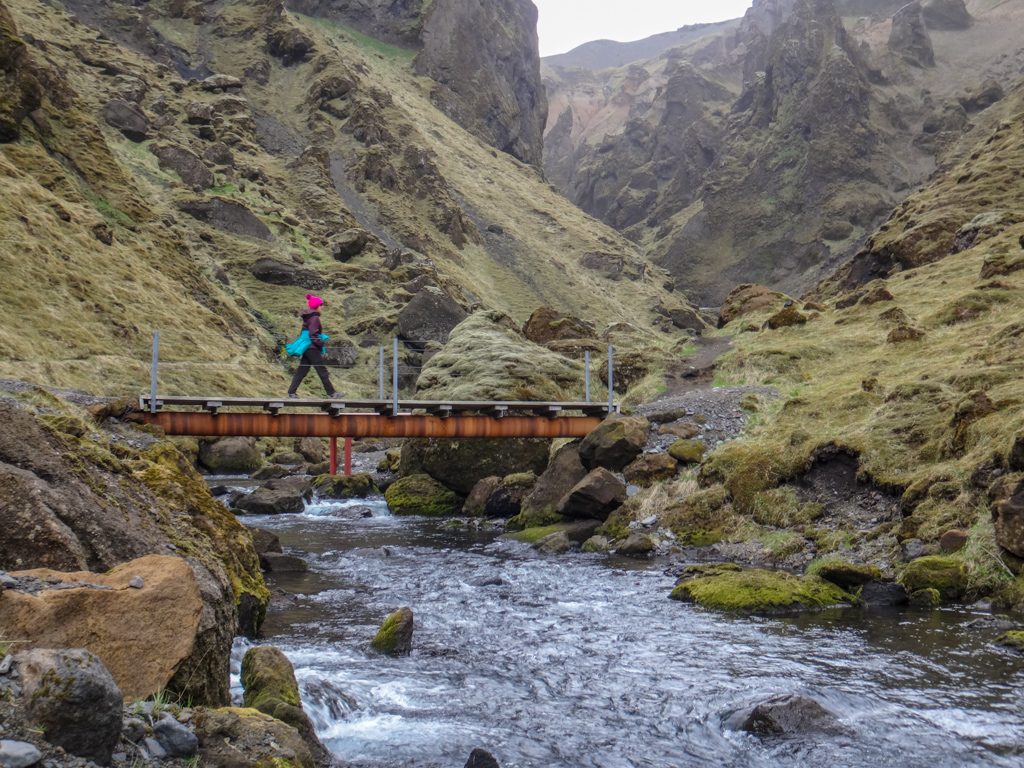 Þakgil boasts a small camp-ground with cabins, hydro-electric power, and its own cave for barbecues.  The campground was closed for the next few weeks, but day-visitors can visit even when the camp is closed.

We followed a walking track up a stream – walking anywhere in this place would be interesting, and we didn’t mind where we went. 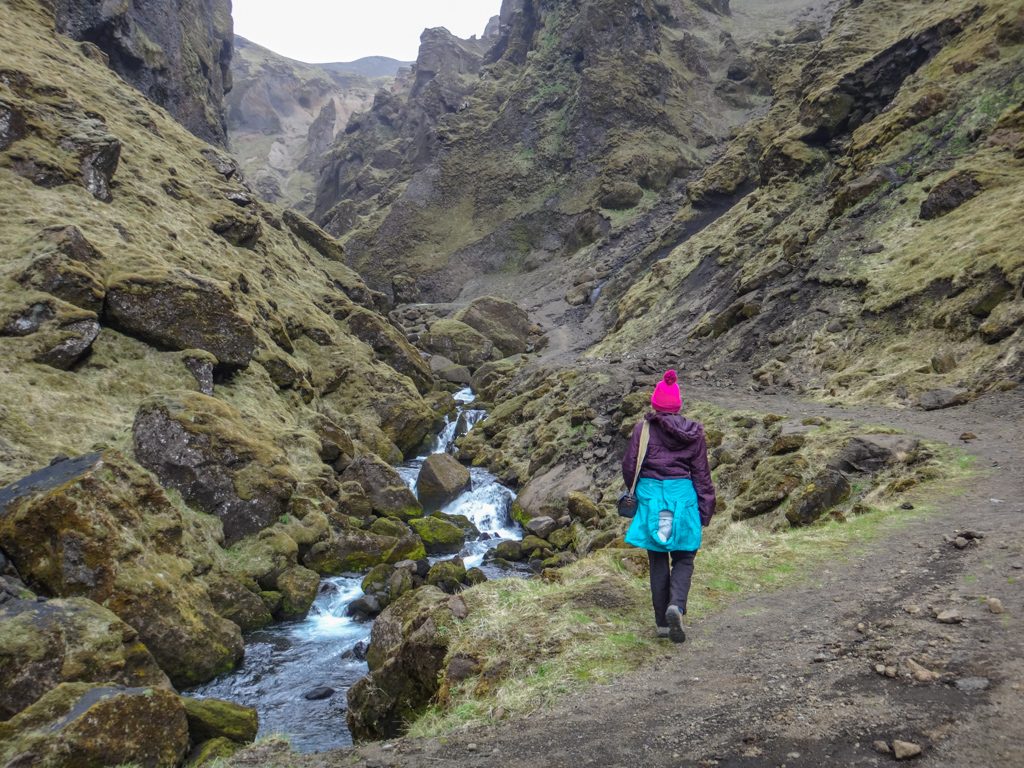 The track squeezed into a tight canyon. 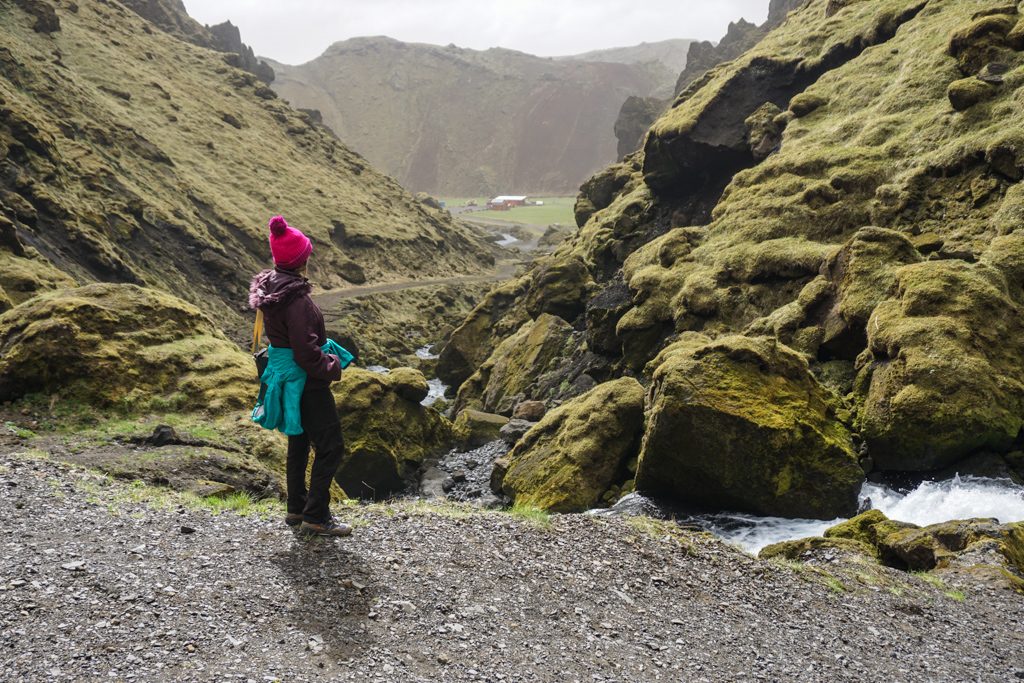 The cozy cabins of the campsite disappeared behind us as we climbed higher. 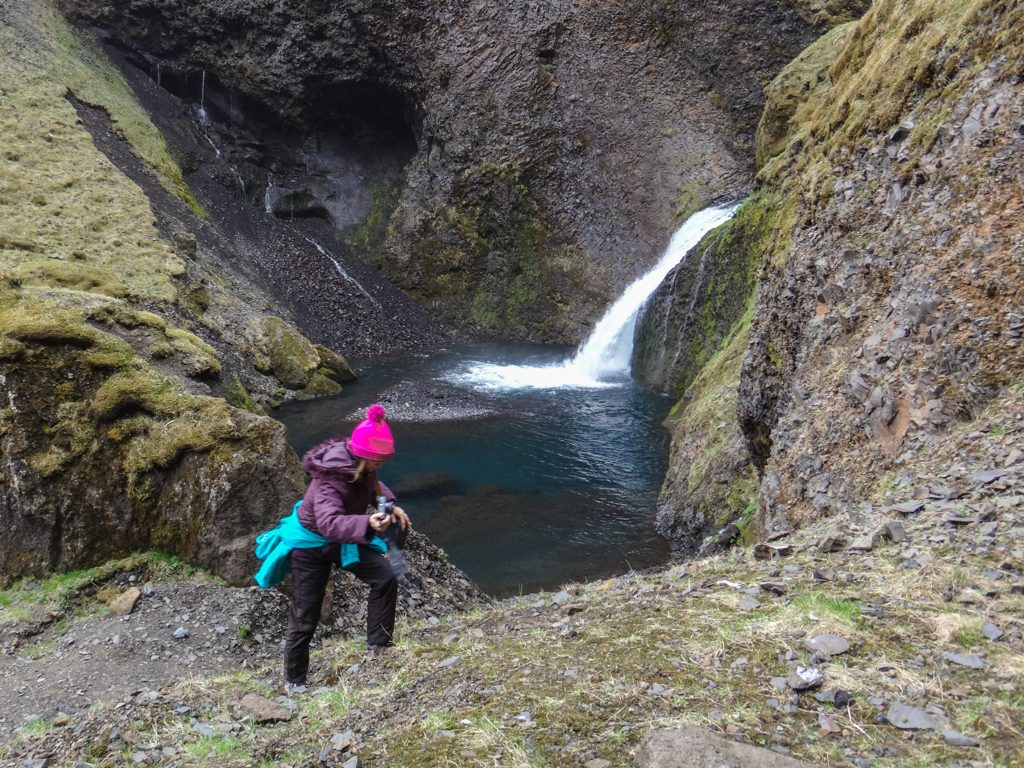 At the end of the canyon we reached a small cascade.  Pipes collected glacial water for the hydroelectric generator a little further downstream.

This small waterfall was miniscule compared to some of the monsters we had seen over the last few days, but as the icy spray stung my face I thought it was beautiful. 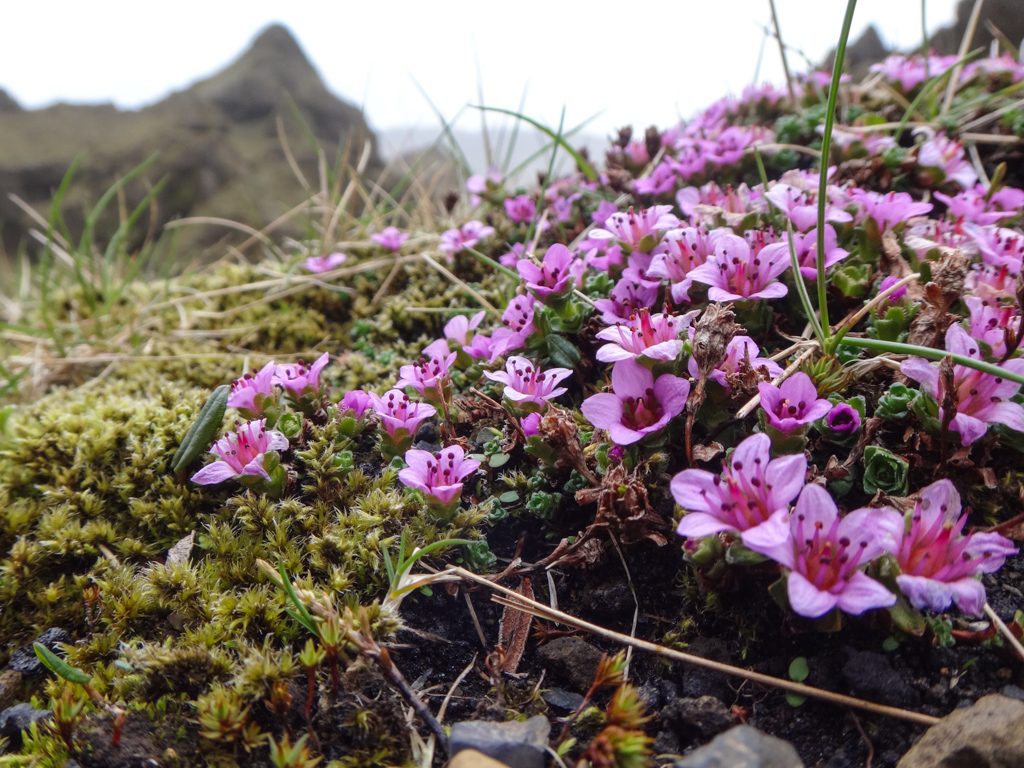 We visited these places over two days while staying at Skógafoss.

It’s a fifteen minute drive from Skógafoss to the Sólheimajökull car park.  From the car park, it’s a half-hour walk (3km round trip) to the glacier.

It’s a half-hour drive from Sólheimajökull to Dyrhólaey.  Several lookouts are close to the car park, although you will need a 4WD vehicle to get to the lookout on the top of the Dyrhólaey peninsula.

From Dyrhólaey it’s a twenty-minute drive to the small village of Vik.

From Vik it’s a rough one-hour drive along a bumpy dirt road to Þakgil and Remundargil.  You’ll need a 4WD to get there comfortably.

All of the walks we did in this section were easy – you could comfortably take children on them, with the exception of the 7km hike to the DC3 wreck – it’s flat but you need to be able to walk briskly for an hour and a half.

All of the stunning landscapes in this part of Iceland have been shaped by the powerful forces behind the Mýrdalsjökull glacier and its underlying volcano, Katla.

Iceland’s glaciers are full of wonderful surprises.  There are over two hundred and fifty of them.  They cover more than eleven percent of the country’s land mass, or over 11,000 square kilometres.

We feel very fortunate to have been able to visit. 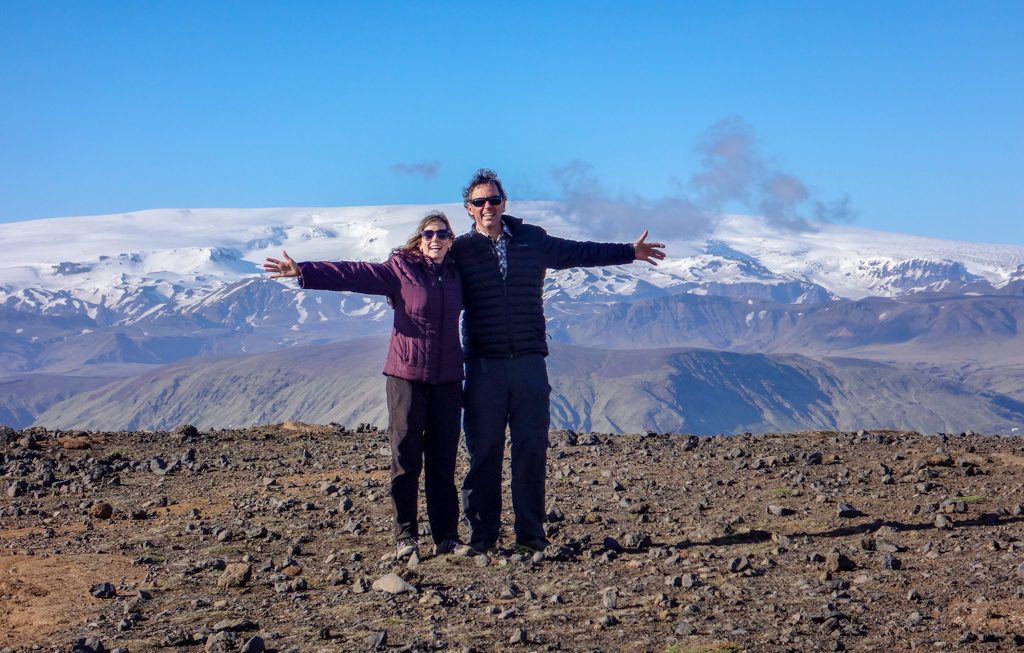