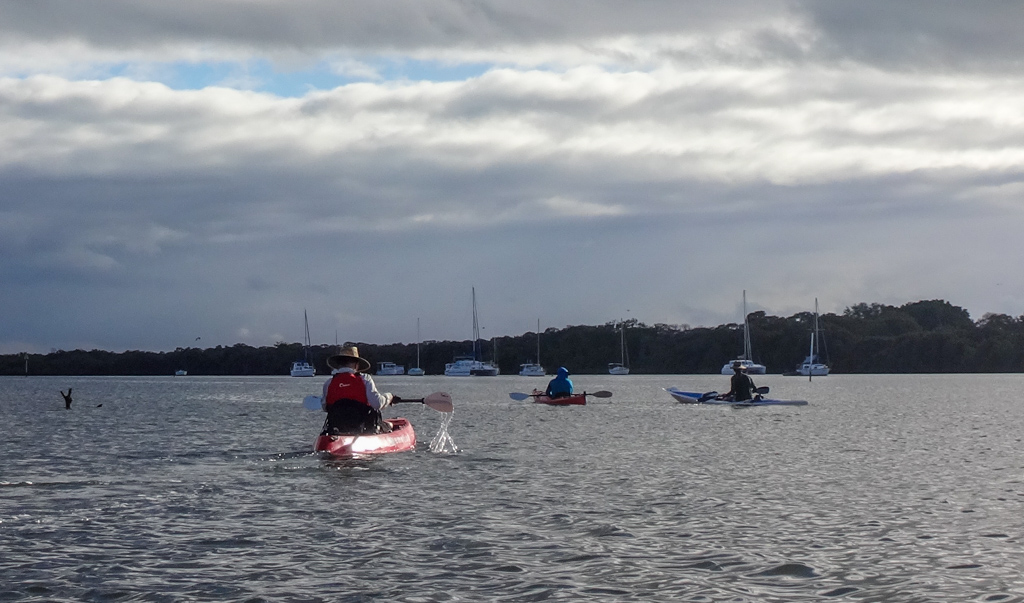 The tides were favourable.  The temperatures were cool.  A paddle on the Caboolture River seemed like a good idea.

We started at the Uhlmann Road Boat Ramp, near the mouth of the river at Burpengary.

The area that surrounds this river is the traditional country of the Kabi aboriginal people.  Its name comes from the word “Kabultur”, which in their language which means “place of the carpet snake”.

At times, the river has had many sand banks and shoals at its mouth.  The explorer, John Oxley, noticed this when he visited the area in 1823, and originally named it the “Deception River”.

The Caboolture River has its source in the D’Aguilar Range near Campbells Pocket.  In the 19th and early 20th centuries, loggers would harvest red cedar from the mountain slopes, lash them into rafts and float them downstream to Moreton Bay where they’d be taken to sawmills in the area.

There were no log rafts today as the incoming tide gently pushed us upstream. 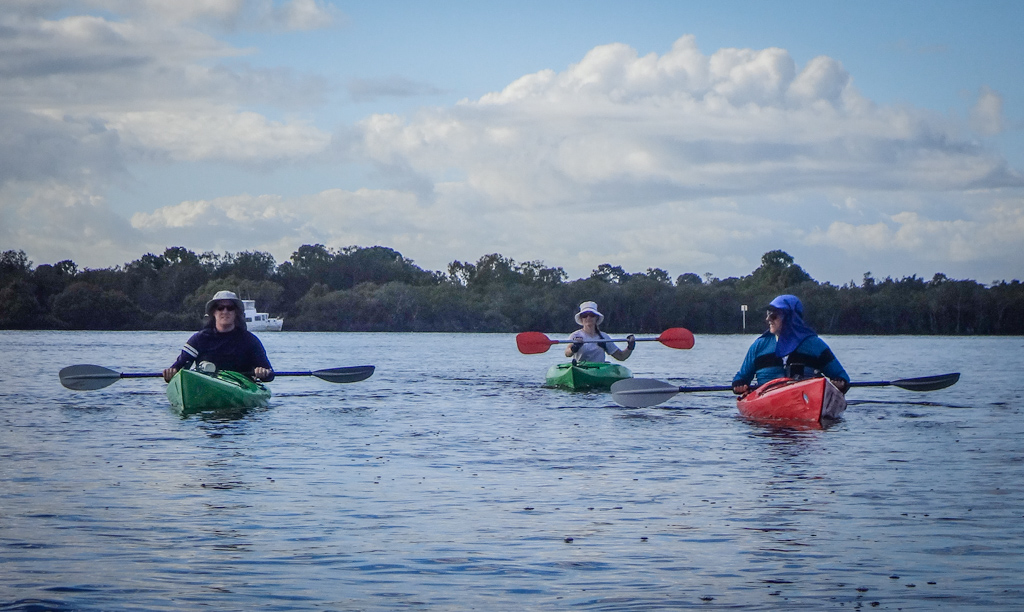 We waited on the water for a few minutes to let everyone catch up, then pointed the boats up the river and set off. 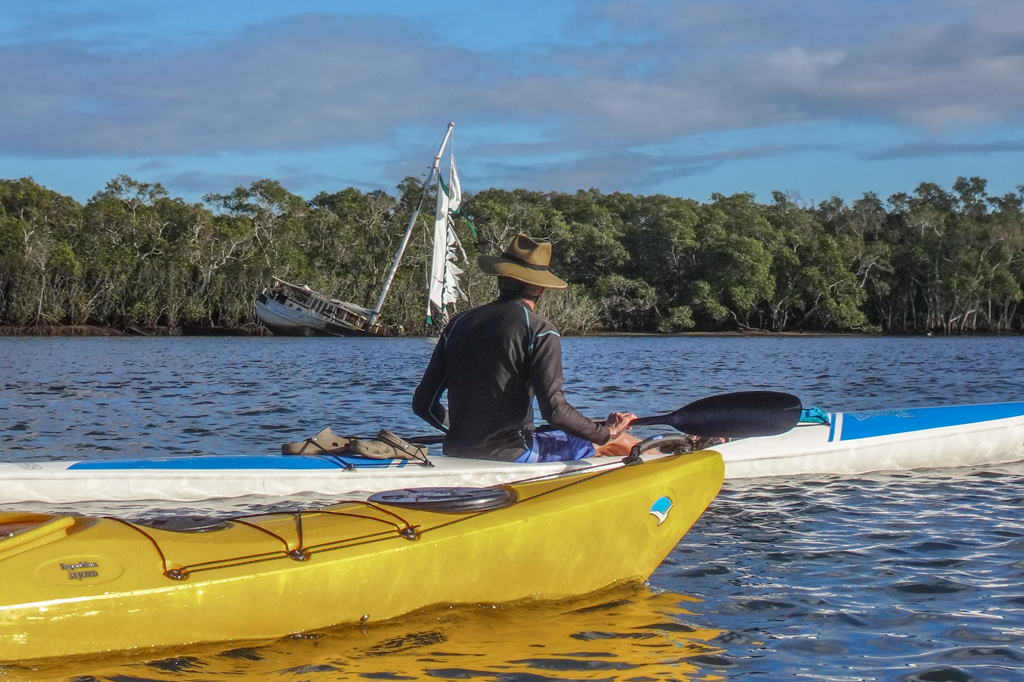 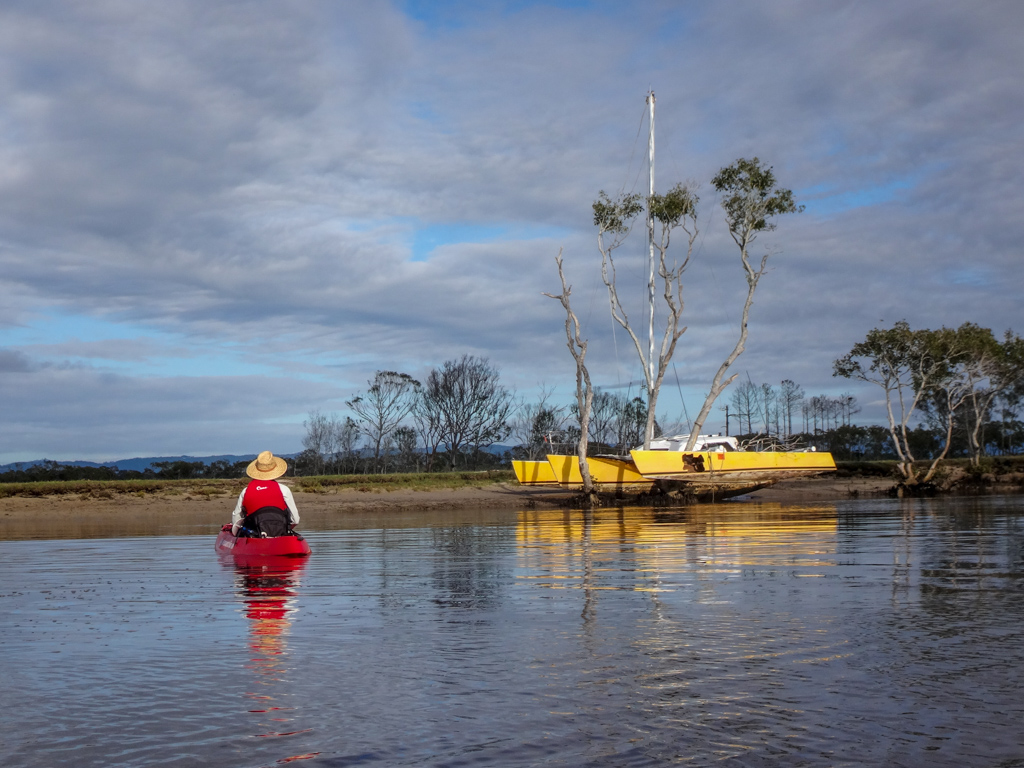 In places, the river bank is a graveyard for unloved boats.

How was this trimaran so delicately maneuvered against a tree?  Was it an accident, or did someone wedge it there to stop it floating off? 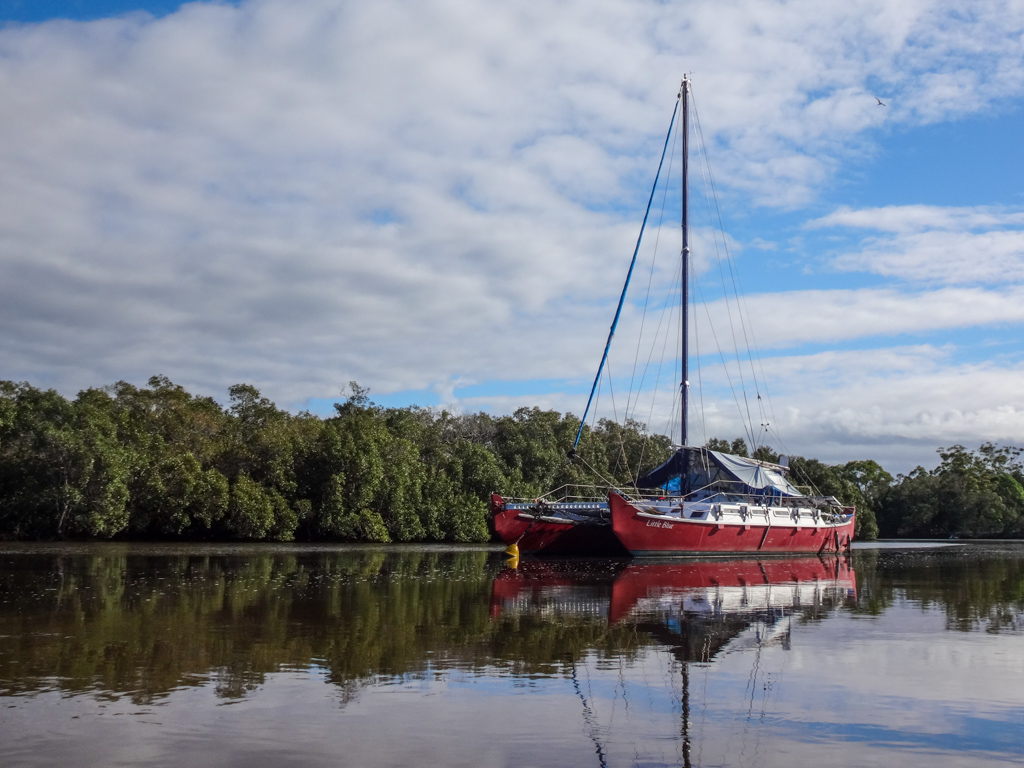 There were plenty of well-cared-for boats as well, moored in the middle of the river, their bows pointing into the rising tidal current. 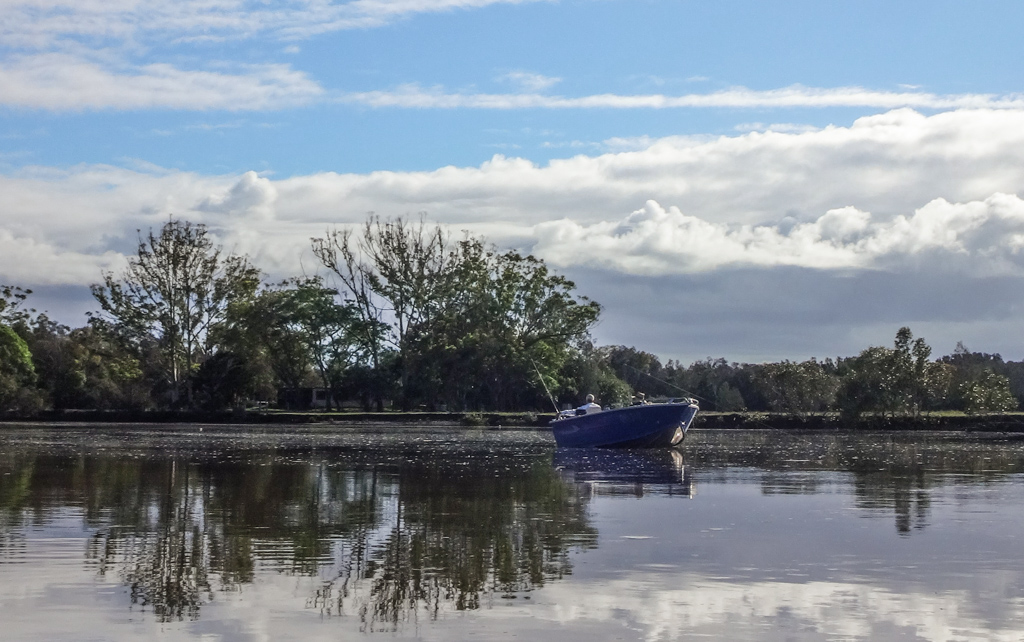 We slowly made our way west, past optimistic fishermen quietly awaiting a catch… 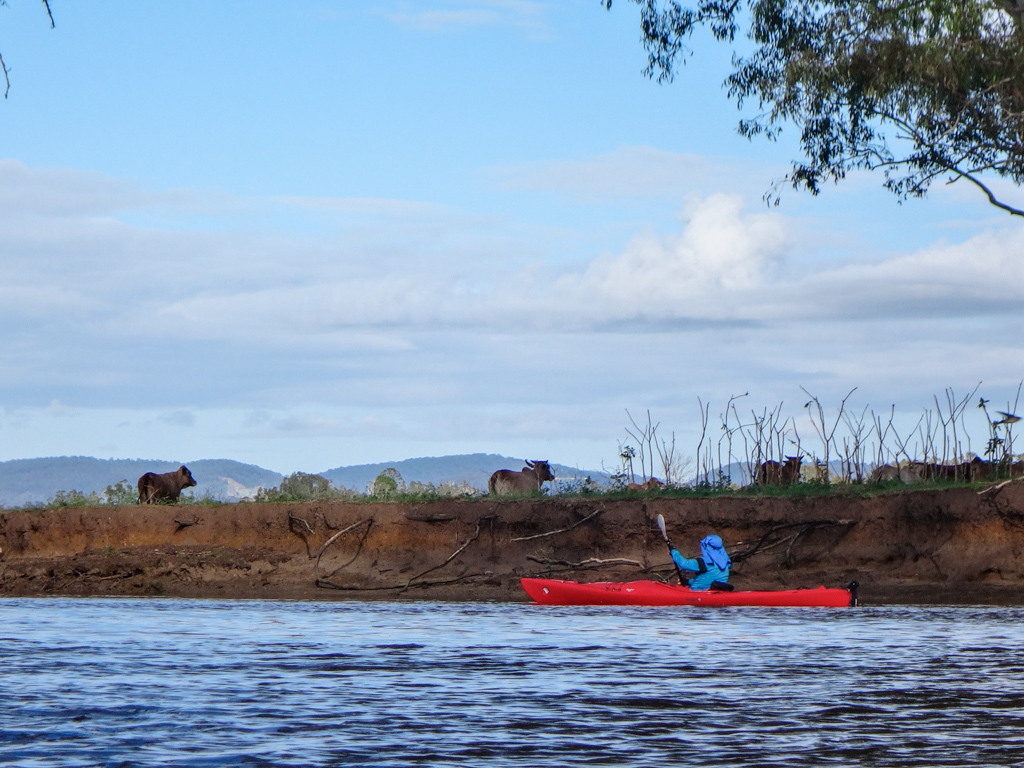 …and curious cattle peering imperiously down at us from their lush paddocks. 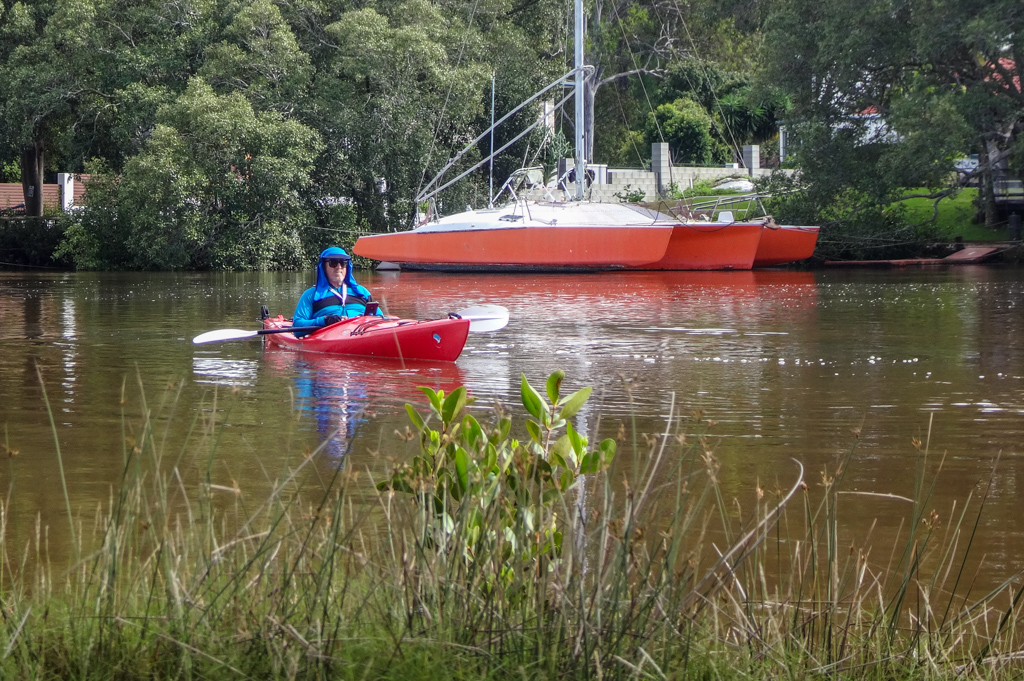 After about two hours we managed to get about ten kilometres upstream.

We intended to come ashore for a break at a small beach near Beachmere Road, but it wasn’t there anymore.  Perhaps it had been eroded away in floods – a reminder that waterways are continually changing.

Instead, we got out on the other side of the river, at a shady, grassy spot for a quick snack, and waited for the tide to turn around. 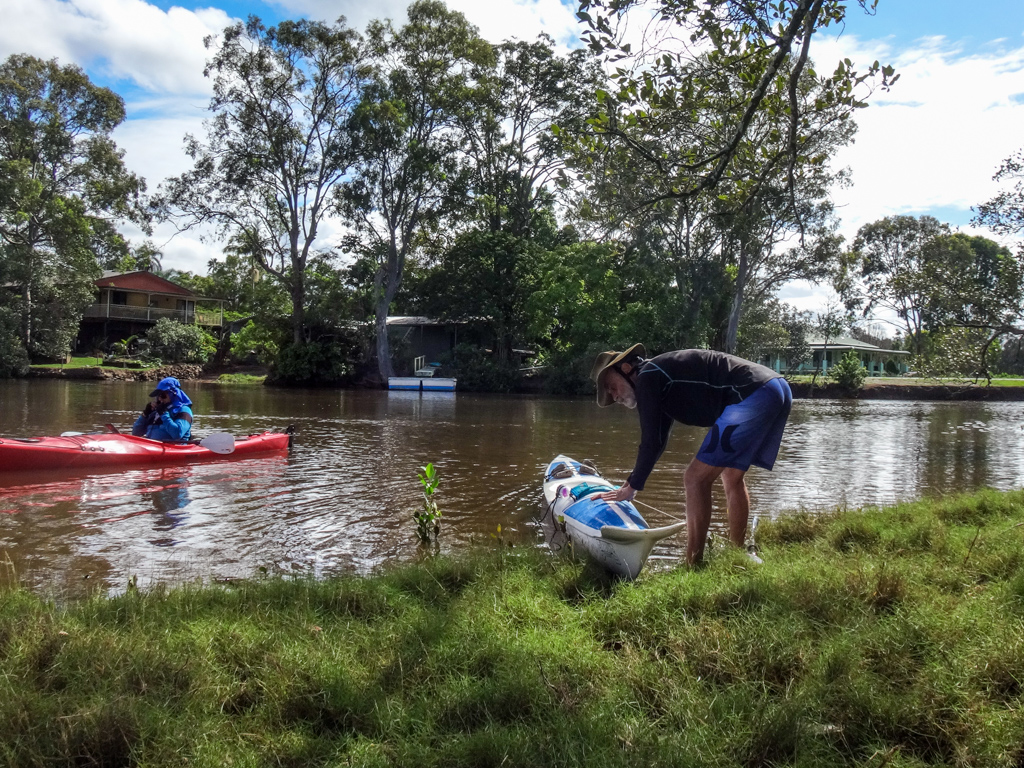 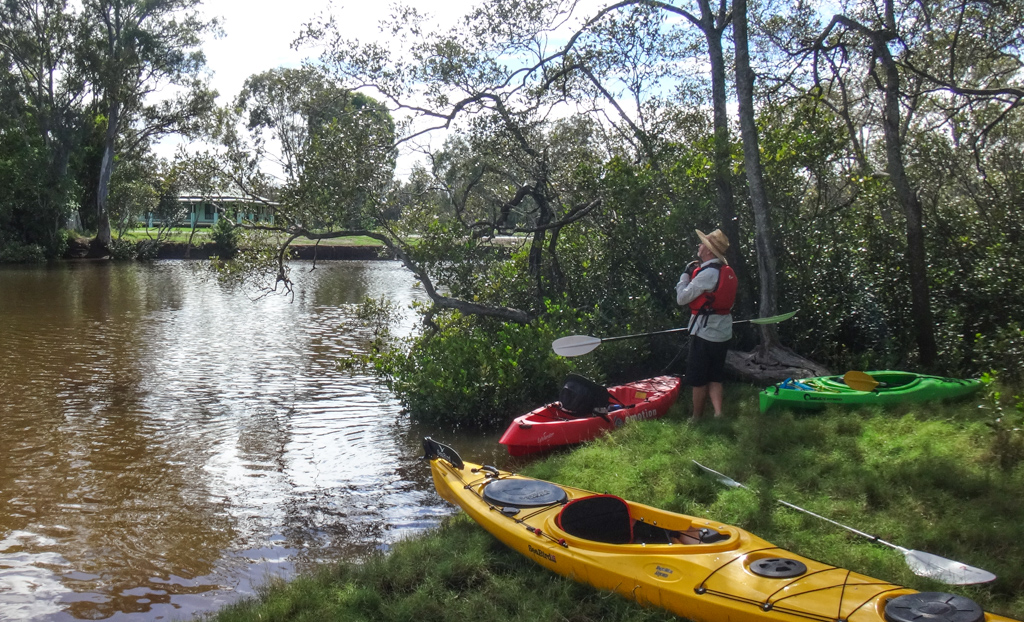 After a brief rest, and a few sand-fly bites, we hopped back into the kayaks for the return trip downstream.

“Why don’t we check this creek out?” Russel suggested.

We floated under the trees, but beat a hasty retreat once the mosquitoes started attacking us.

Darb had the right idea, and held back, letting the rest of us deal with the mozzies.

We paddled about twenty kilometres in just over four hours.  During that time I burned about 800 kcal.

This was a leisurely paddle, with bit of hard work over the last few kilometres as we battled headwinds to get back.

Thanks Darb, Calum, Russel, Adam, Sandra and Steve for a fun day out.