On one of the hottest days of the year we decided to climb one of the toughest off-road hills around Brisbane. What could go wrong? 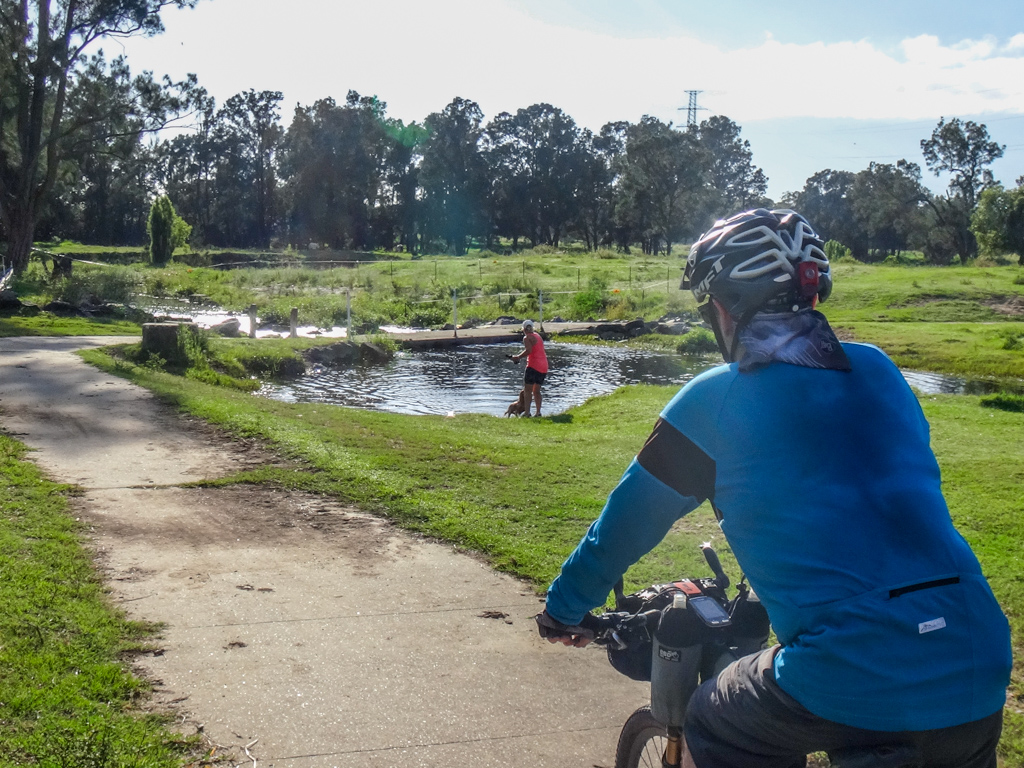 A few of us needed to get home early, so we decided to ride from our homes, meet at a central point then go to Camp Mountain.

Darb and I took the scenic route over the South Pine River while a dog and his owner played happily in the cool water. 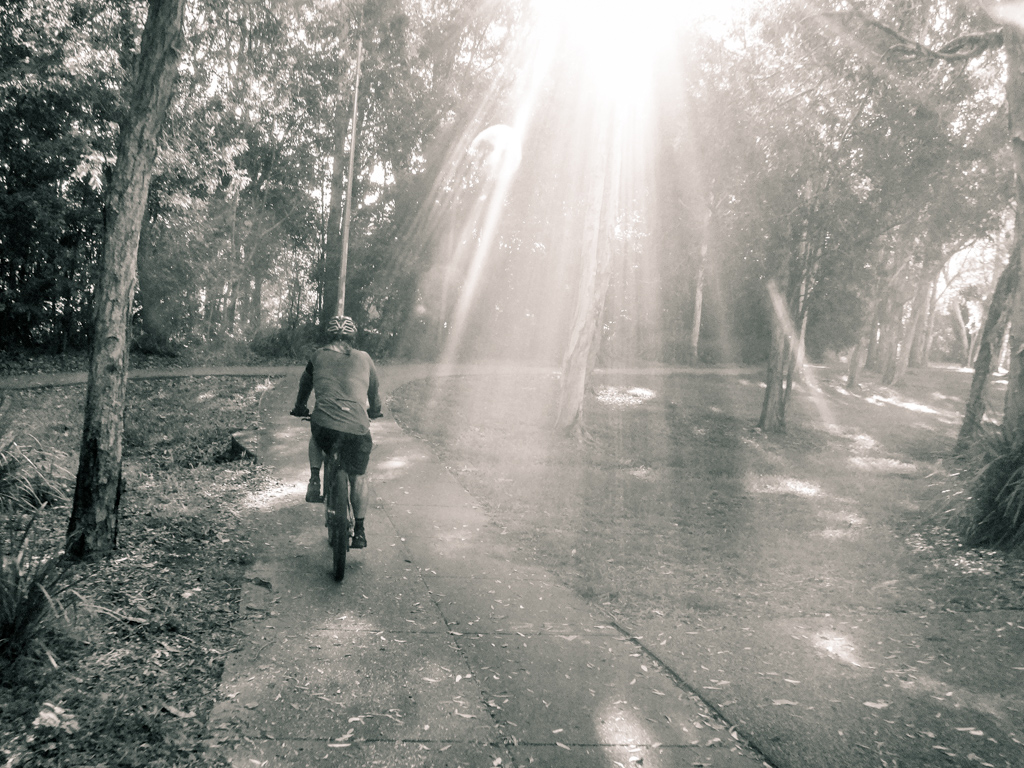 Even though the early morning temperatures were only in the low twenties, the sun still felt hot through the trees as we rolled along the bike paths towards Bunyaville.

Darb and I took it easy – there was no rush and we had some hard work ahead.

At Bunyaville, Wayne led us to the top of a track called “Wayne’s World”, on his chunky Muru fat bike.

The first time I ever rode this track was with Wayne. Who knows? Maybe he had some influence over naming the track – and giving it the #1 track number.

Part way through “Dark Side” track we dropped down a fire trail, then pushed up a tough pinch climb.

This is a sneaky way to get from Bunyaville to Samford Regional Forest (aka “Ironbark”) without having to spend much time on paved roads, but it’s steep in places. 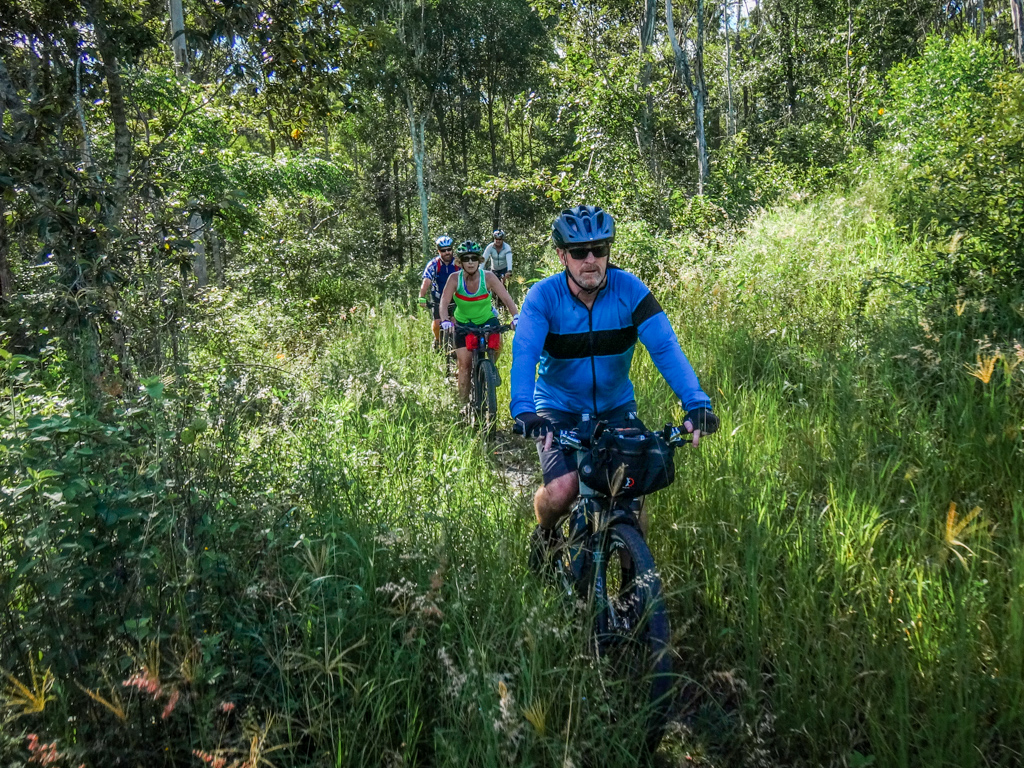 We rolled through some thigh-high fukawi grass, under the power lines, towards Ironbark.

I intended to follow a few quiet back streets, but Eric suggested some tracks I don’t normally ride.

They were shady and flat – thanks Eric! 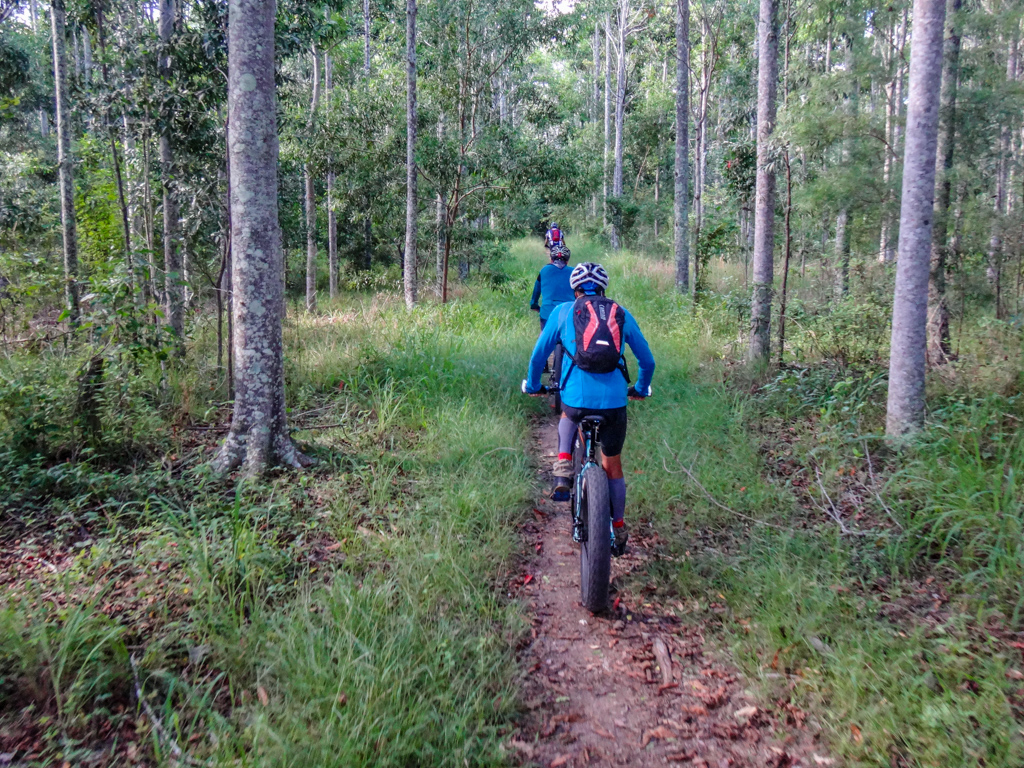 We continued through the cool shade of Surrey Farm Park. 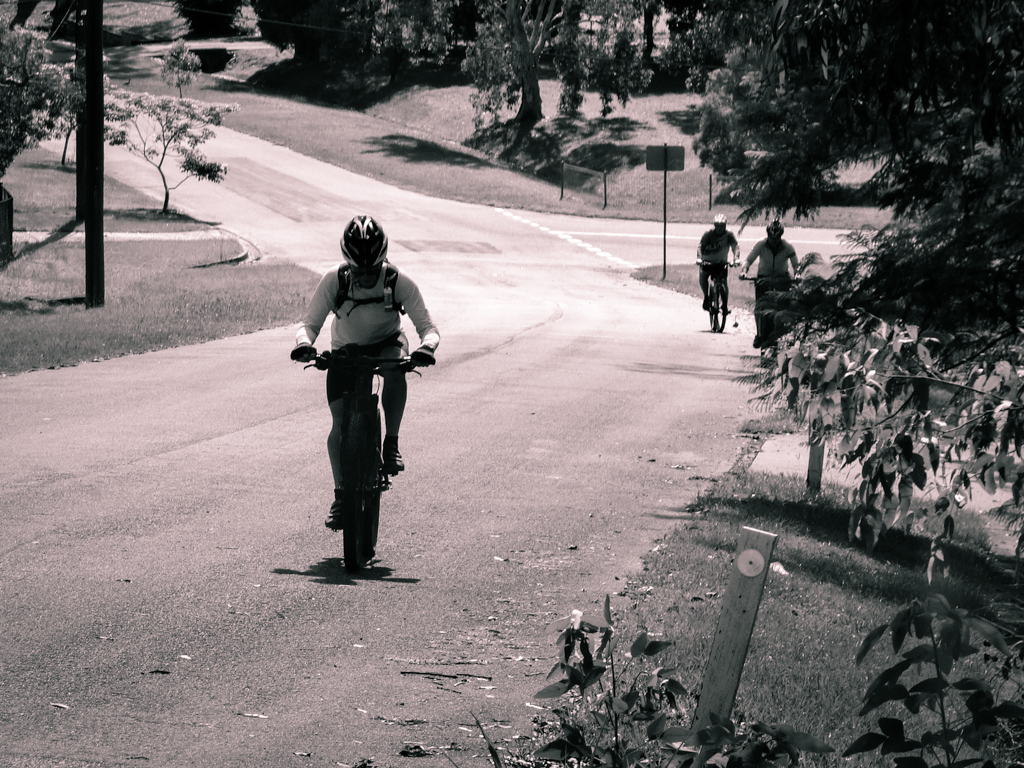 During a short stint on the tarmac at Bergin Creek Road the temperature reached 30C. It was only 9:30, and we had some big hills ahead.

We entered Samford Forest and continued climbing towards the top of the ridge on “3 Sisters” track. 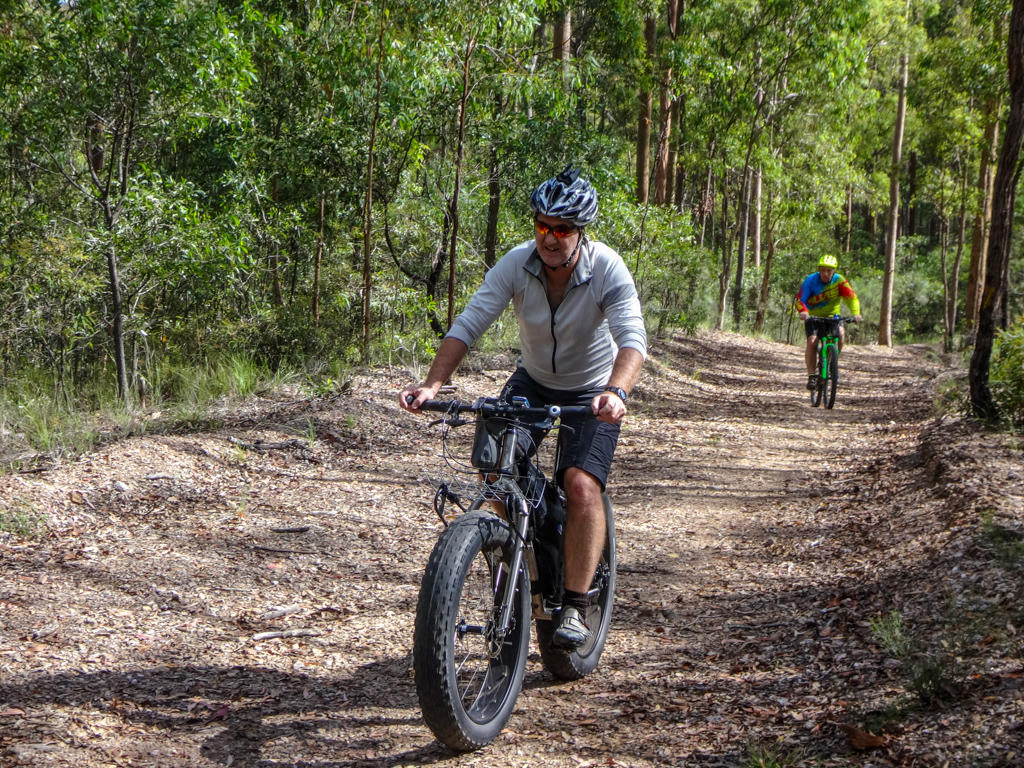 The heat was starting to bite. Simon decided he’d leave us to research some local cafés.

The rest of us continued our slog up “3 Sisters” track. 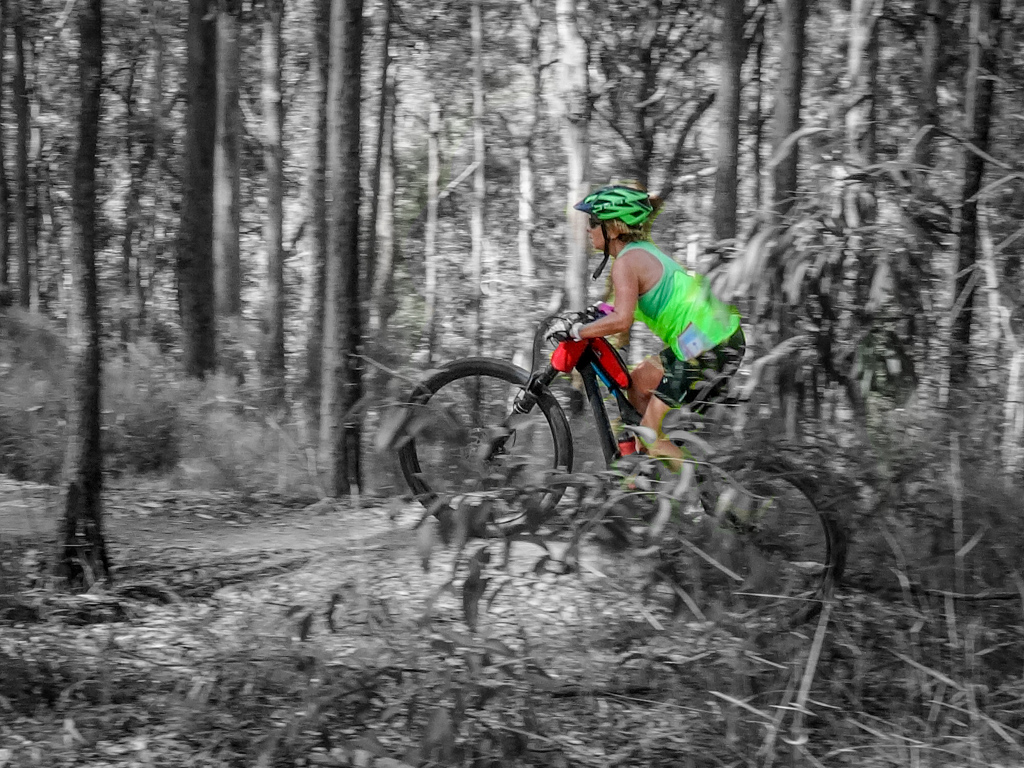 After the hard work of reaching the top of the hill at Ironbark, we had some fun rolling down “Kombi Express” – a popular twisty single-track. 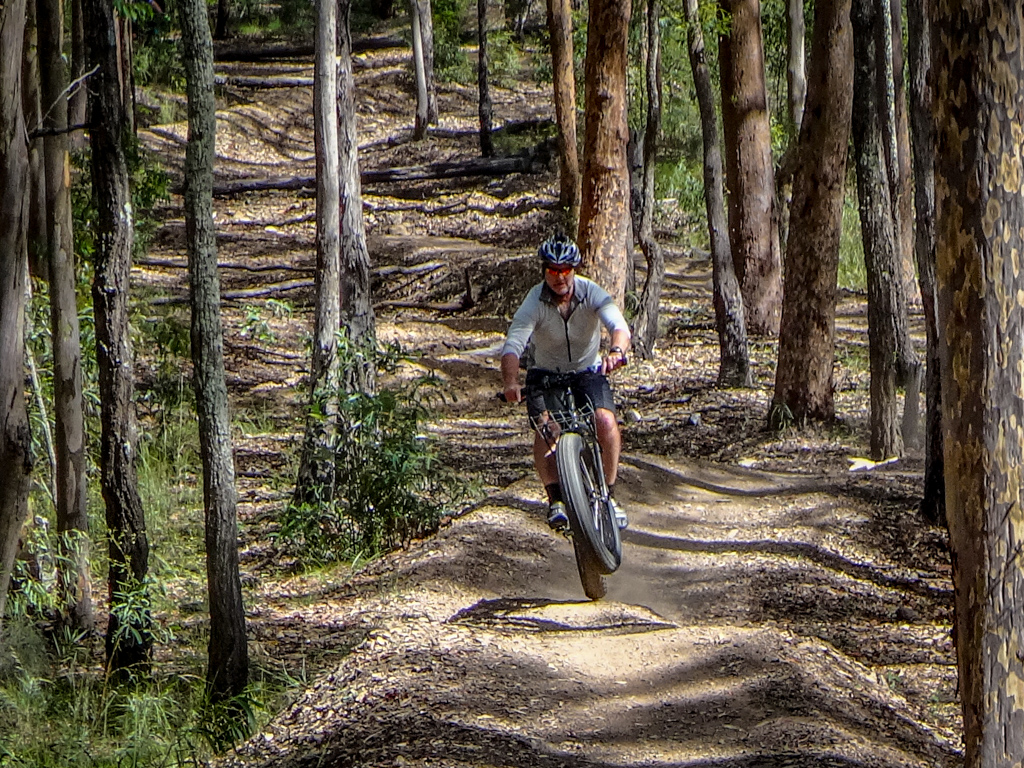 Wayne’s heavy fat-bike roared down the track towards me, its tyres humming loudly. 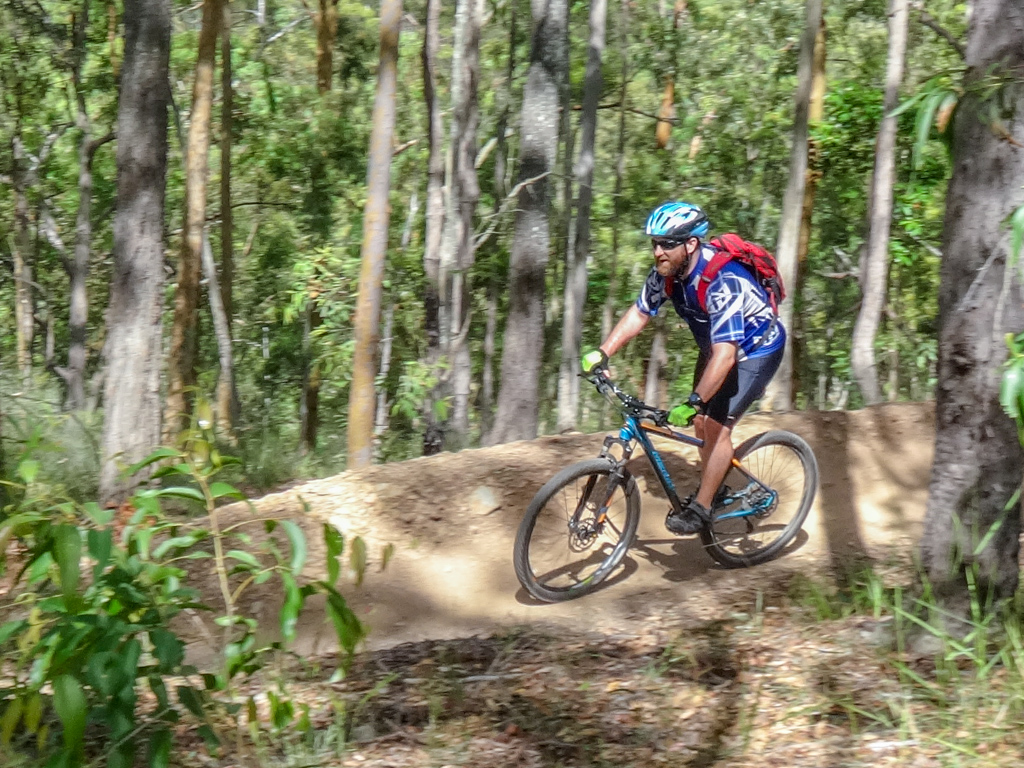 The track snaked down the hill for ages, hugging the contours of the hillsides… 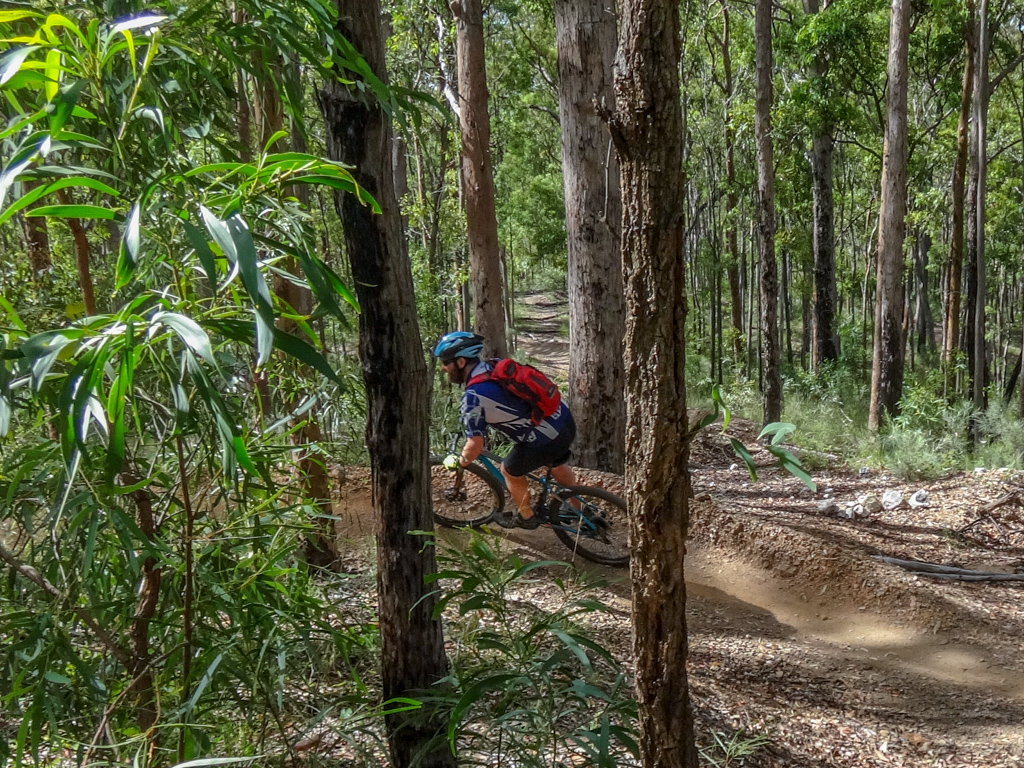 …rolling over bumps then disappearing behind trees.

We all had a lot of fun. 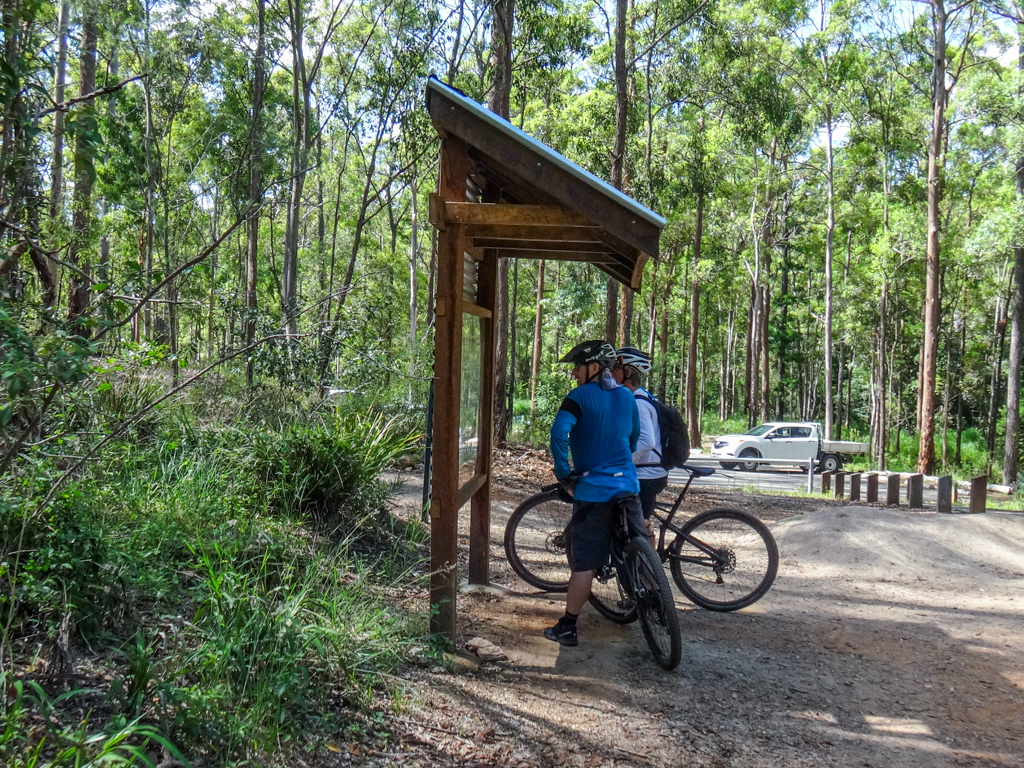 At the bottom of the long descent a few of us realized we were running low on water. We checked the map, then rode off a short distance to refill our bottles. 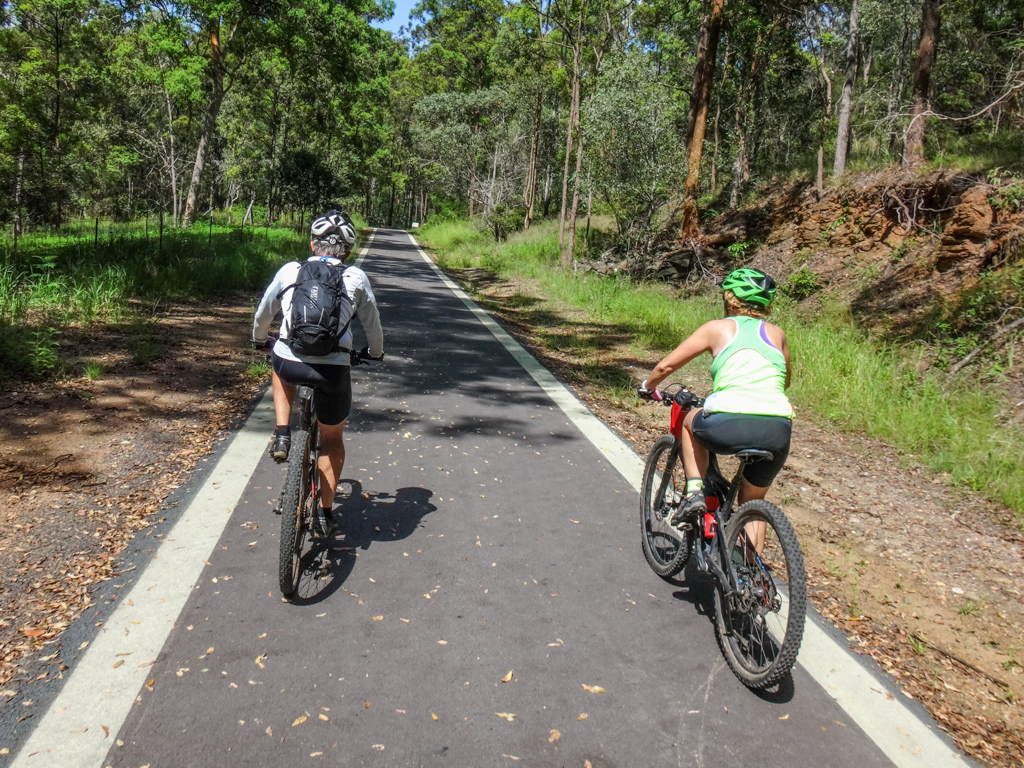 …so the rest of us continued along the rail trail towards Camp Mountain. 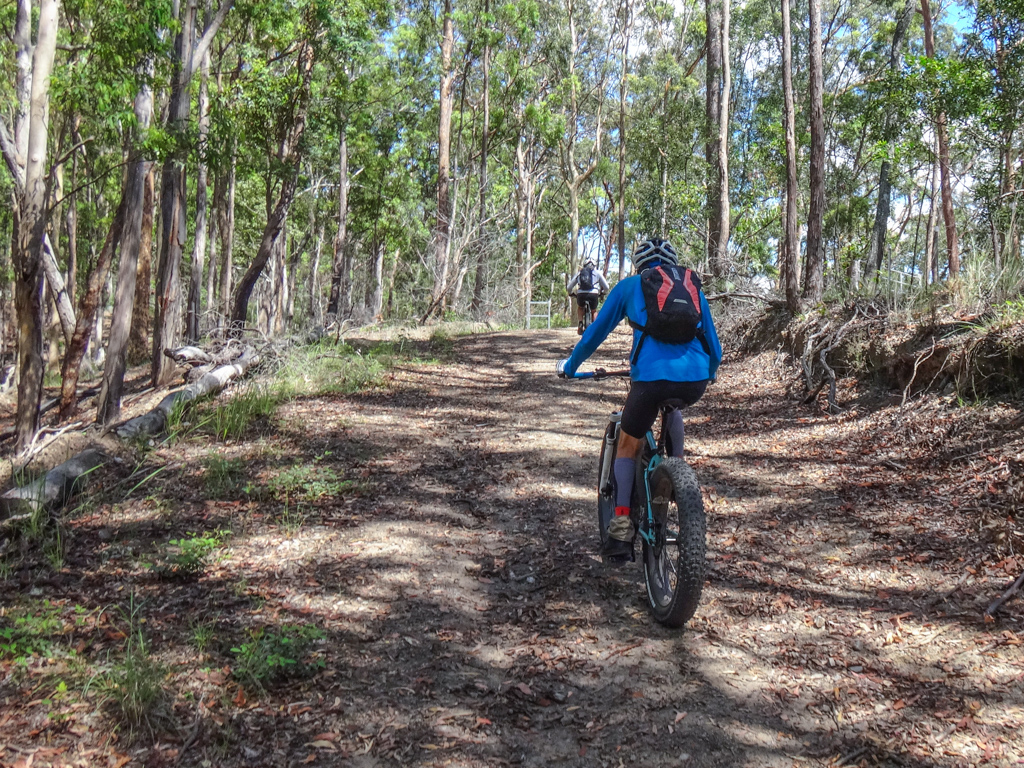 From the end of the Lanita Road Rail Trail it’s a three kilometre climb via the “Short Side” track to the summit of Camp Mountain. 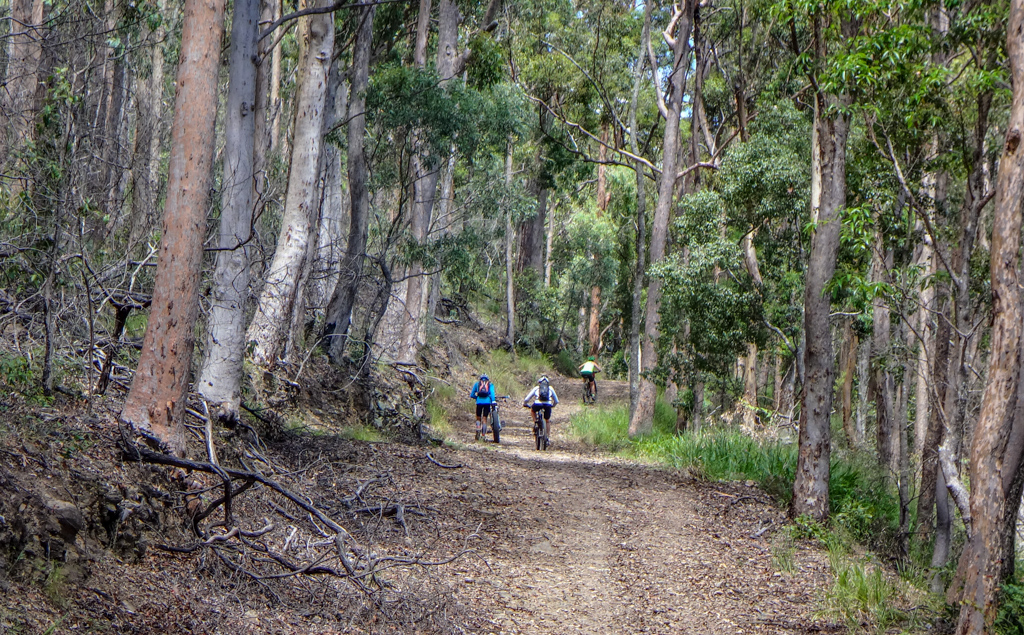 For a couple of kilometres the gradient ranges from about 15% to 25%.

It’s a challenging climb. I felt elated when I rode up it for the first time a few years ago.

Today I had to walk a lot of it while the others powered up.

I guess I’ll just have to train a bit harder before I come back next time (preferably on a cooler day).

It was a relief to finally reach the top.

The views from the top were impressive.

To the south-east we could see the tall buildings in the CBD. 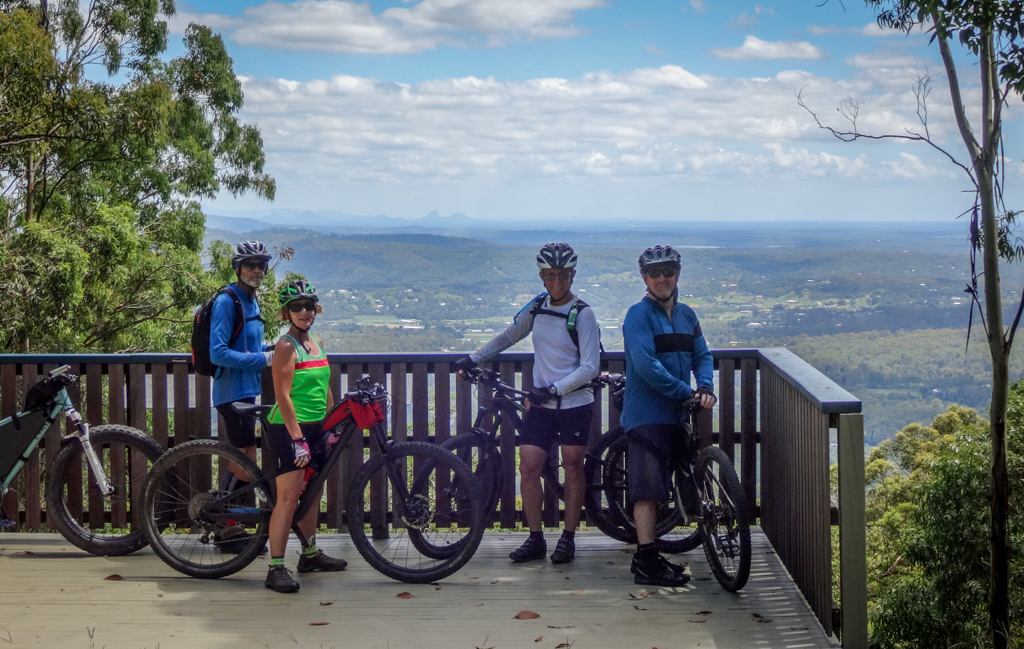 To the north we could see the Glasshouse Mountains.

We welcomed the cool breeze as we rested in the shade. 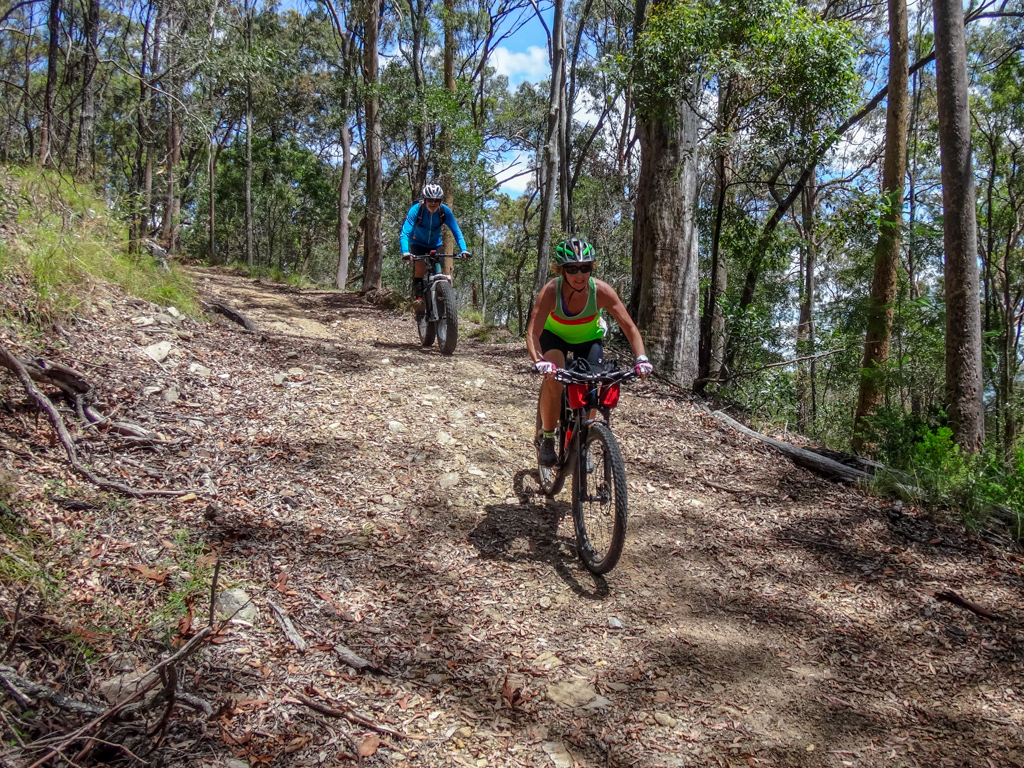 We’d done the hard work. It was time to head home.

Riding down the “Short Side” is much more fun than the up-hill trip! 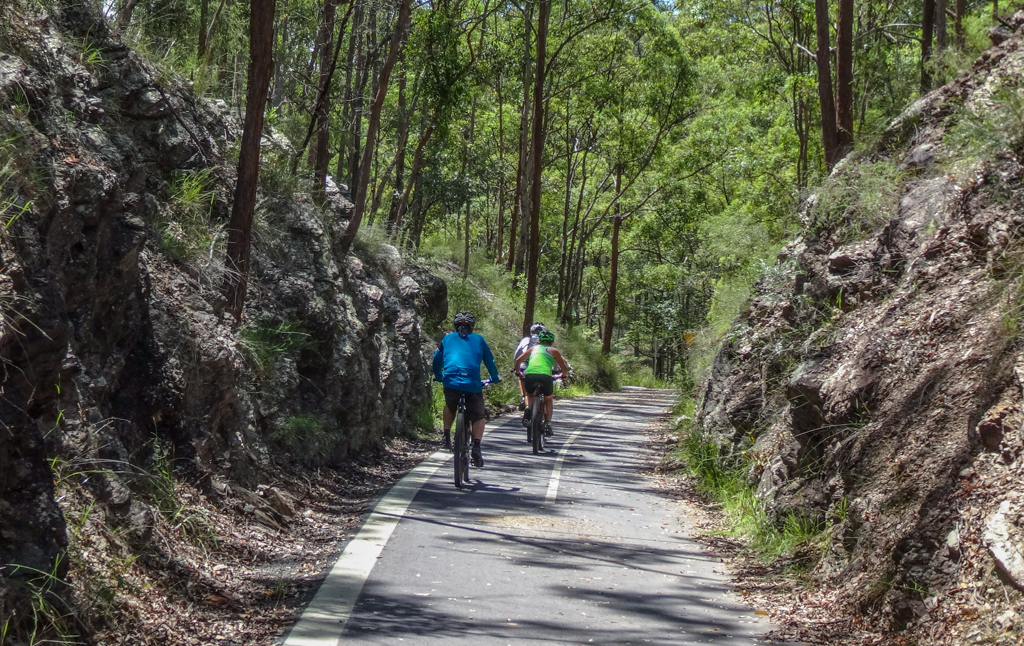 We rode back along the rail trail towards Ironbark… 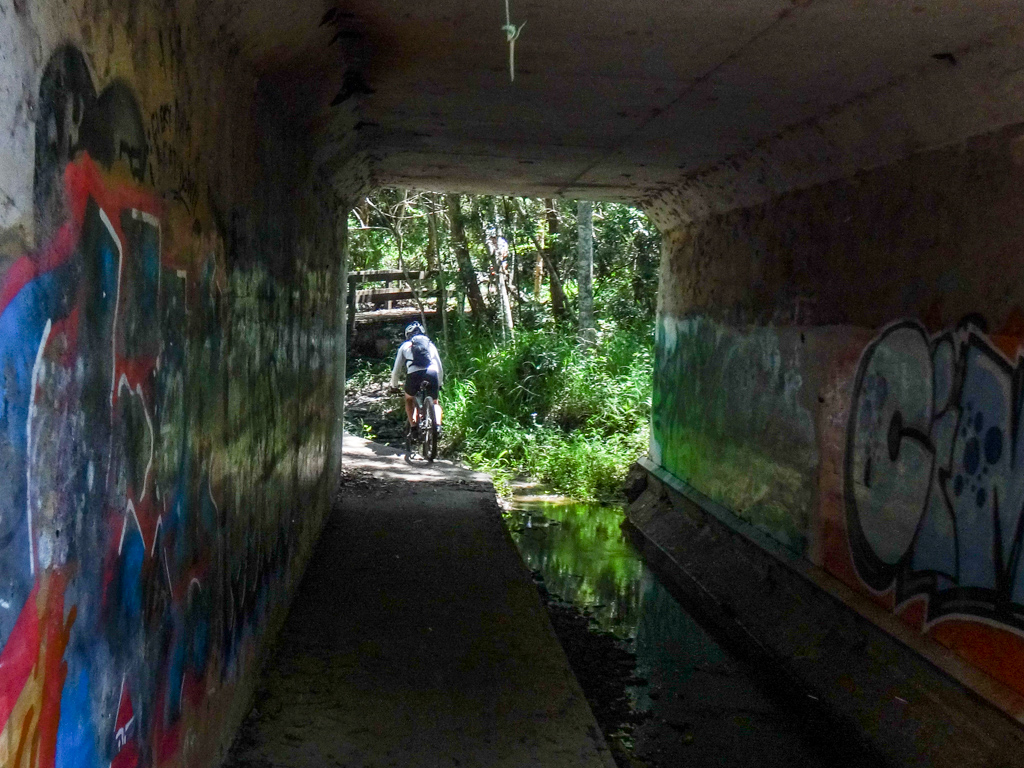 …then back home through the forest.

Because we all started from our homes, we each rode different distances.

I ended up riding about sixty kilometres in about six hours, including breaks.

During that time I climbed about 1,000 metres in elevation, and burned about 3,500 kcal.

I’ll rate this ride 8.5 out of 10 on the tough-o-meter because of the heat, and the big climb up Camp Mountain. It would be easier in cooler months (maybe 7.5 out of 10), but that climb up the “Short Side” is always going to be hard work.

Thanks to Kaye, Darb, Eric, Calum, Simon, Paul and Wayne for another fun day out on the bikes in challenging conditions. 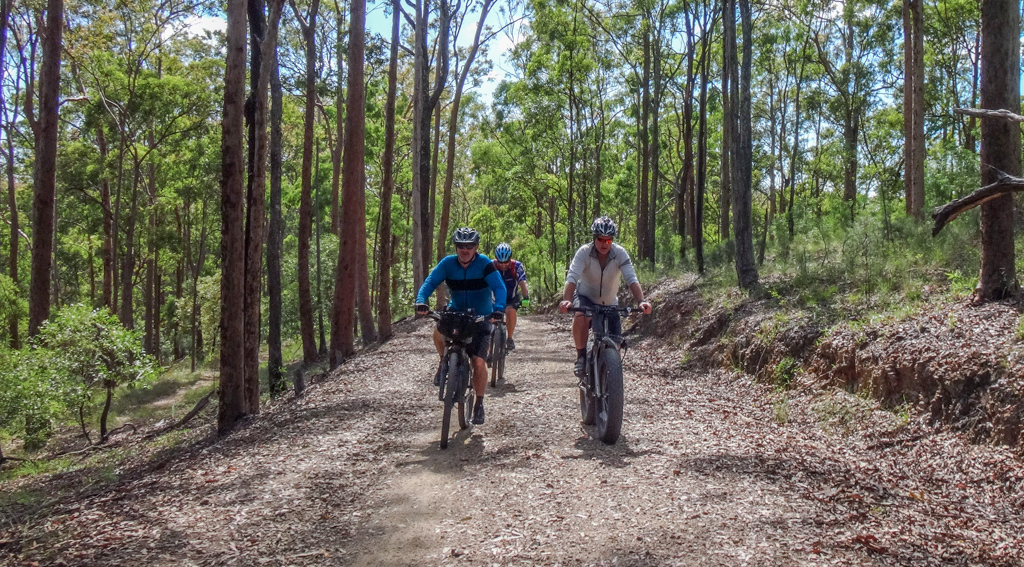 From the Mountains to the Sea