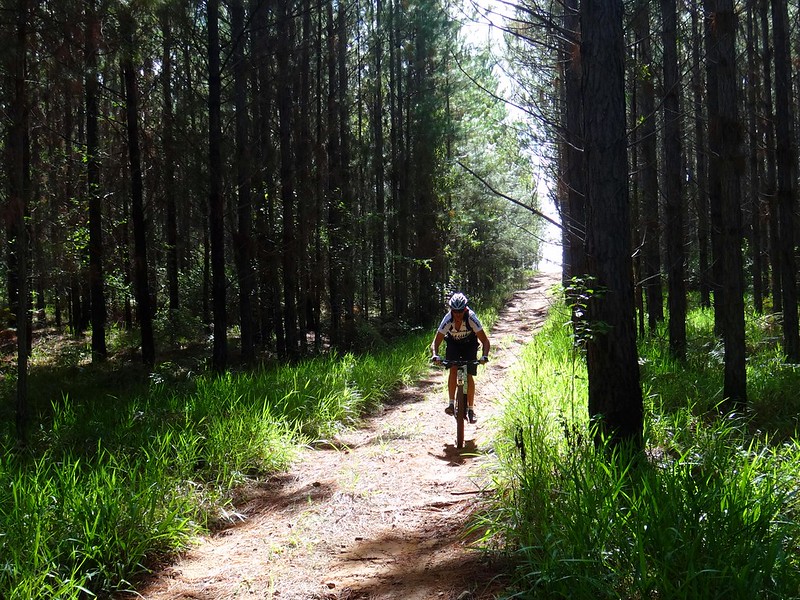 “Let’s just do an easy cruise through the Glass House Mountains”, Darb suggested a couple of days before the weekend.

We’ve had some fun adventures there before, and I agreed with him that it might be fun to pay this scenic volcanic caldera another visit – provided we didn’t have to work too hard.

As often happens, our “cruise” wasn’t as easy as we had anticipated. 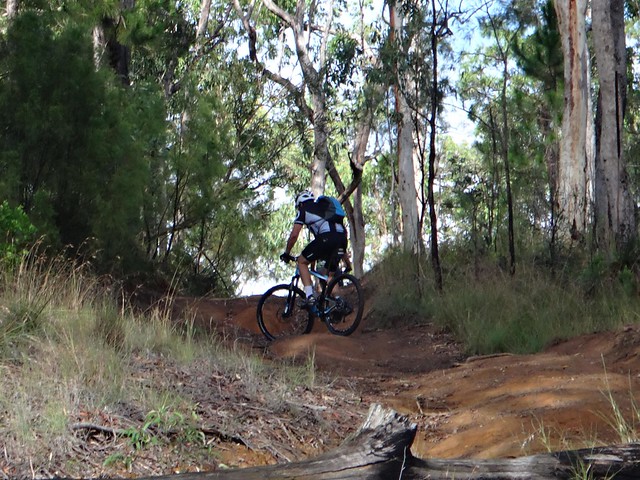 The short ride up the paved road to trail head is anything but cruisy, but once we hit the dirt we had to increase our efforts. The Woordrows Road trail is a challenge in dry weatther, but recent rain had made the clay-based soil around here sticky and heavy, making it even more of a challenge. 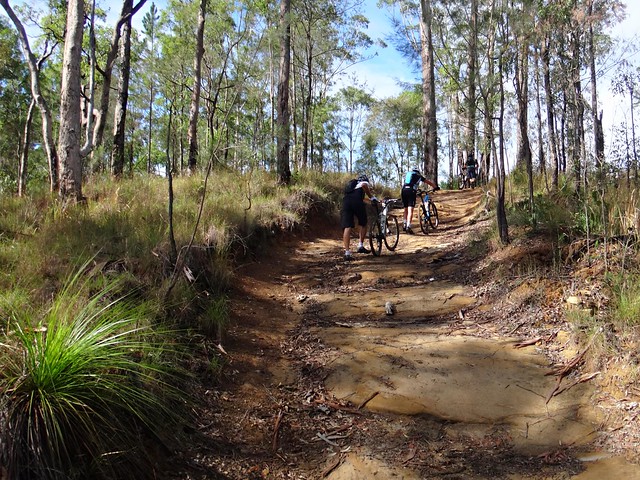 When Eric started walking the steeper sections of Woodrows Road, I took that as an excuse to push my bike up the hill too. 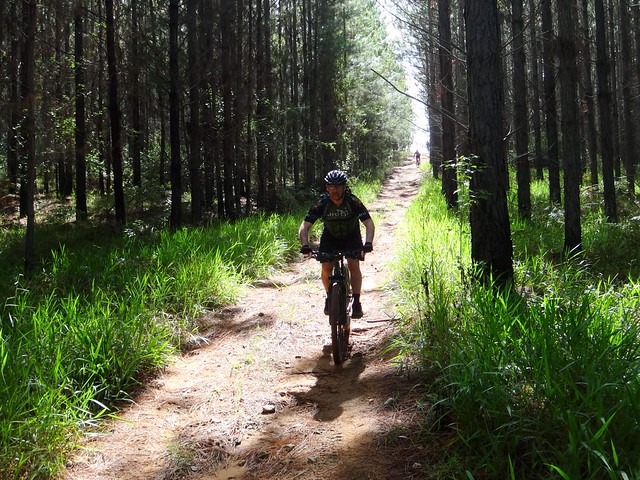 Myriads of tracks lead off in all directions from the main ridge line between the Lookout and Mount Beerwah. We followed a few before enjoying this fun descent through the pine plantation. The temperature dropped as the trees blocked the sun, and we quickly cooled off as the wind blew through our sweaty clothes. 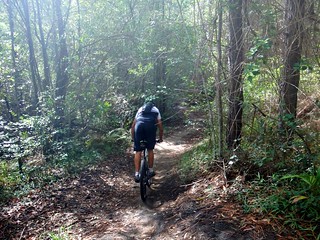 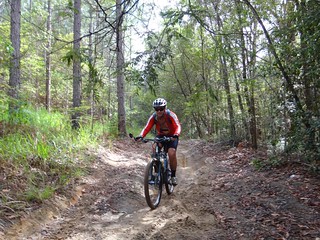 At the end of the descent, a narrow track led off into the thicket, following a small creek. Unlike the management roads around the area, these tight trails twist through the trees, over roots, and through creeks. This particular section of single track continued for about 6 kilometers, with a steep hike-a-bike climb out at the end.

“How long were you going to keep this track a secret?” Darb asked me as we emerged at the end covered in mud, sweat and huge grins. 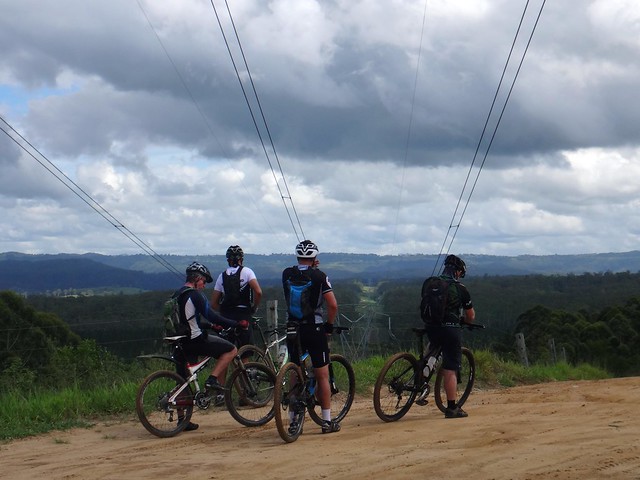 We’ve ridden up Trig Hill a few times – usually to brave the steep descent down a hill we call “The Giant Drop”. Today we were following the power lines northwards towards Peachester instead, so we took a quick break at the top of the climb to check out where we’d be heading. 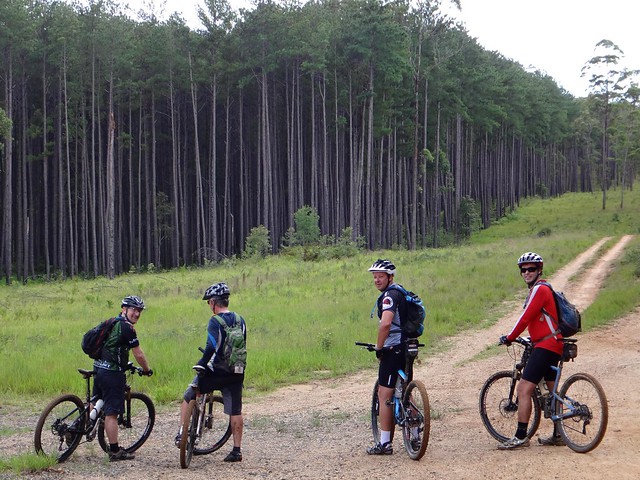 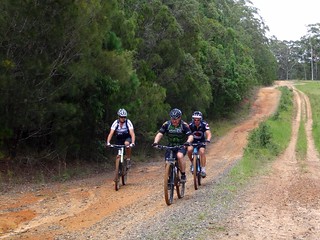 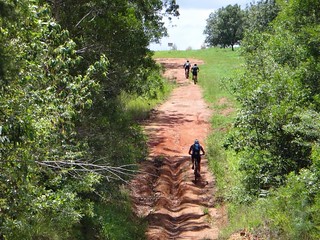 As we rode, the vegetation would alternate between tall straight radiata pines and clumps of native vegetation hugging the creeks. The red-clay trails were sticky in places, and the mud stuck to my tyres. I joked that at times my wheels had gone up a size from 29 to 30 inches. Thankfully, as we accelerated down some of the hills, the mud would fly off in all directions restoring my tyres to their original state.

“Make sure you keep your mouth shut”, Paul yelled to me. 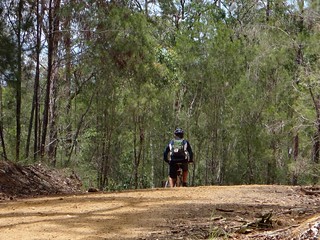 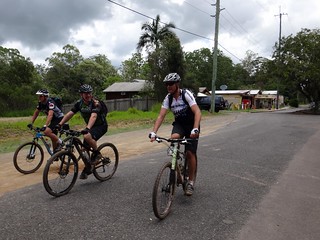 Eric was running short on time, so when we reached the Peachester turn-off, he rolled back down the hill to the cars while the rest of us pedalled into town for lunch. 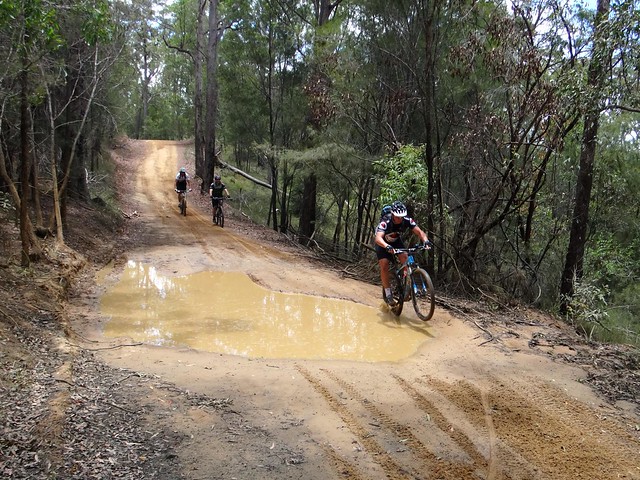 On the way back we dodged a few large puddles on Range Road. Jason decided it would be easier to do a wheelie through one of them. 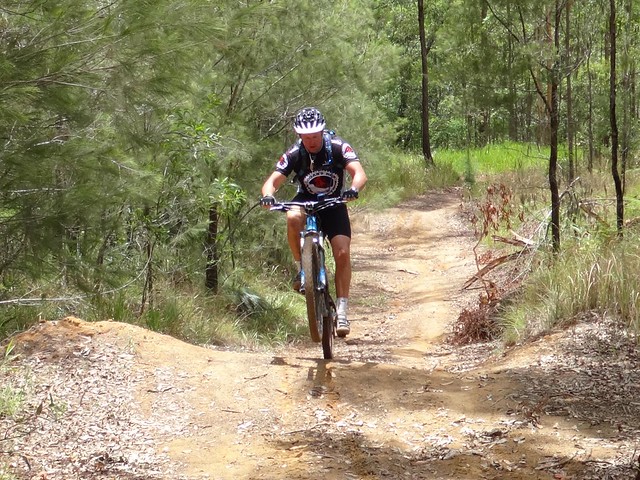 I think Jason has a thing for wheelies – he did this one while riding uphill out of the forest at the end of Sargeants Road. 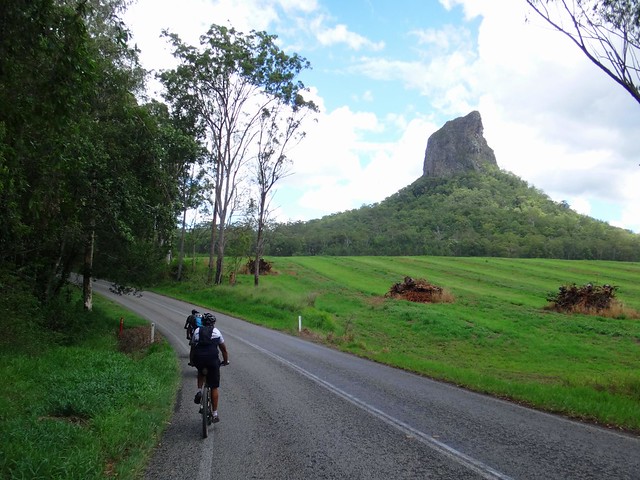 We followed the paved road back to the cars under the watchful eye of Mount Coonowrin.

Thanks Eric, Darb, Paul and Jason for an enjoyable ride.

We rode a total of 40km in just under 5 hours including a long lunch break. We climbed 930m in vertical ascent, and I burned 2,100 kcal.

It certainly wasn’t an “easy cruise” like I had planned, but I think we had a great (if not muddy) time.

There are parts of this ride I’d love to revisit when it cools down and dries out later this year. Would you like to come?