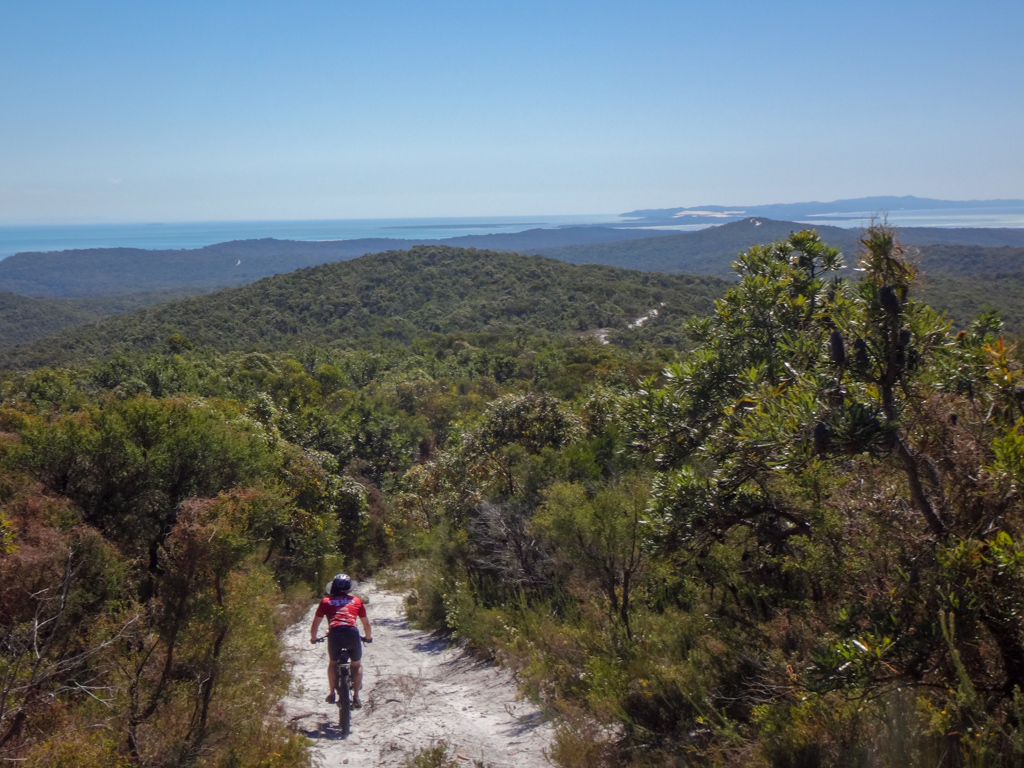 North Stradbroke Island, or “Minjerribah” as it is called in the local Jandai language, is a huge sand island in Moreton Bay east of Brisbane.  Today we explored it on our fat bikes. 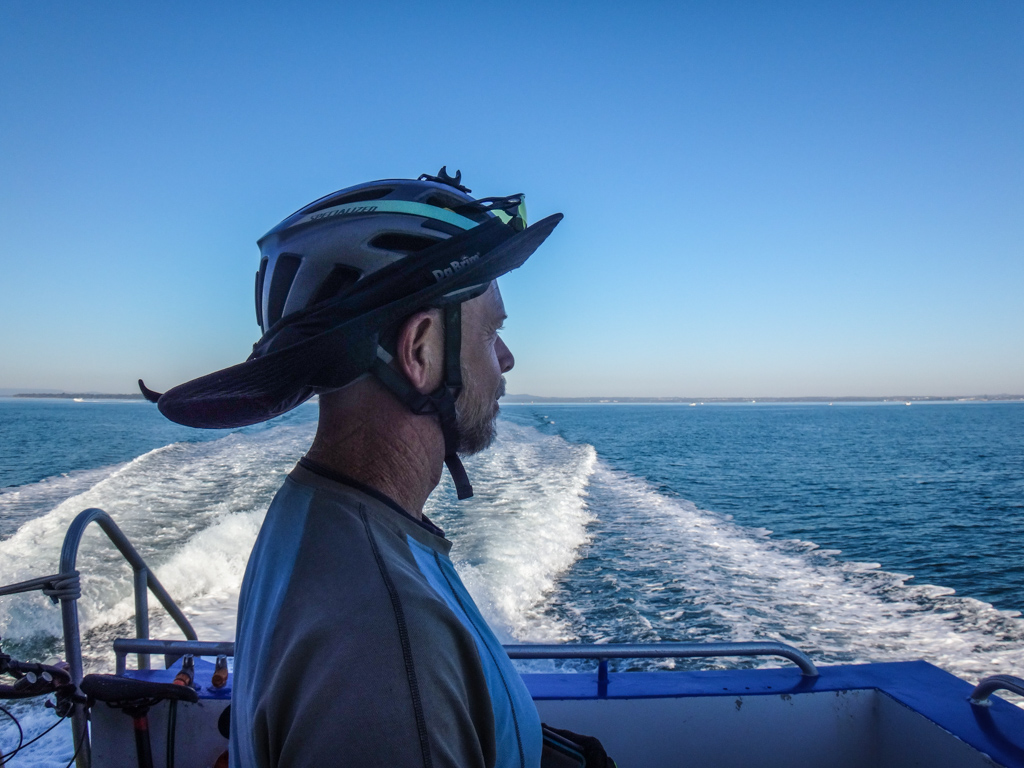 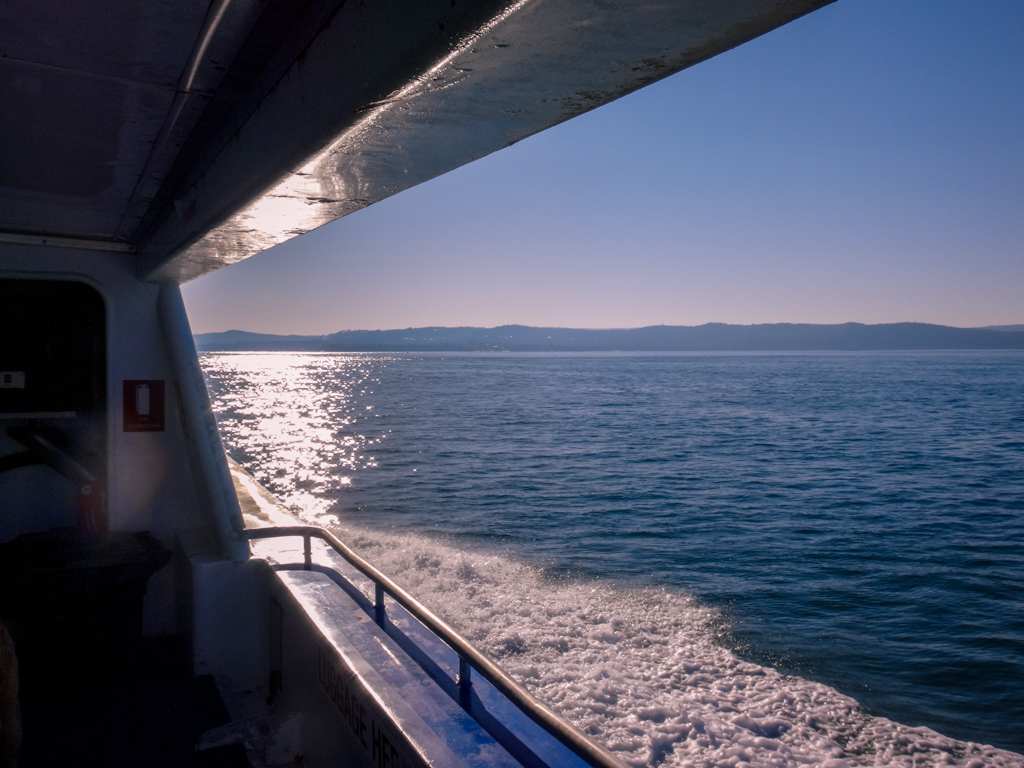 It took us about half an hour to sail across the bay to Dunwich on the water taxi.  Imagine doing this every day as part of your daily work commute – what a peaceful way to start the day!

We rolled the bikes off the “One Mile” jetty, and pedaled around the cemetery, through town and then up the hill.

It’s a steep hill, and a tough climb on heavy fat bikes, but we eventually made it to the top, as the azure water of the bay dropped behind us. 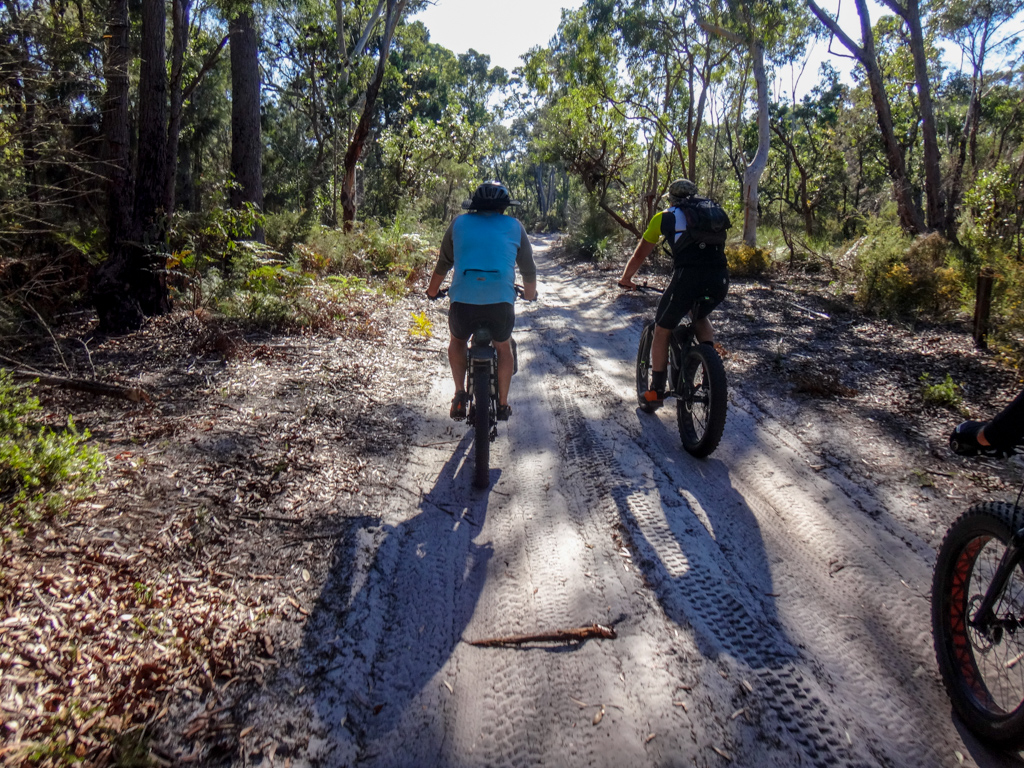 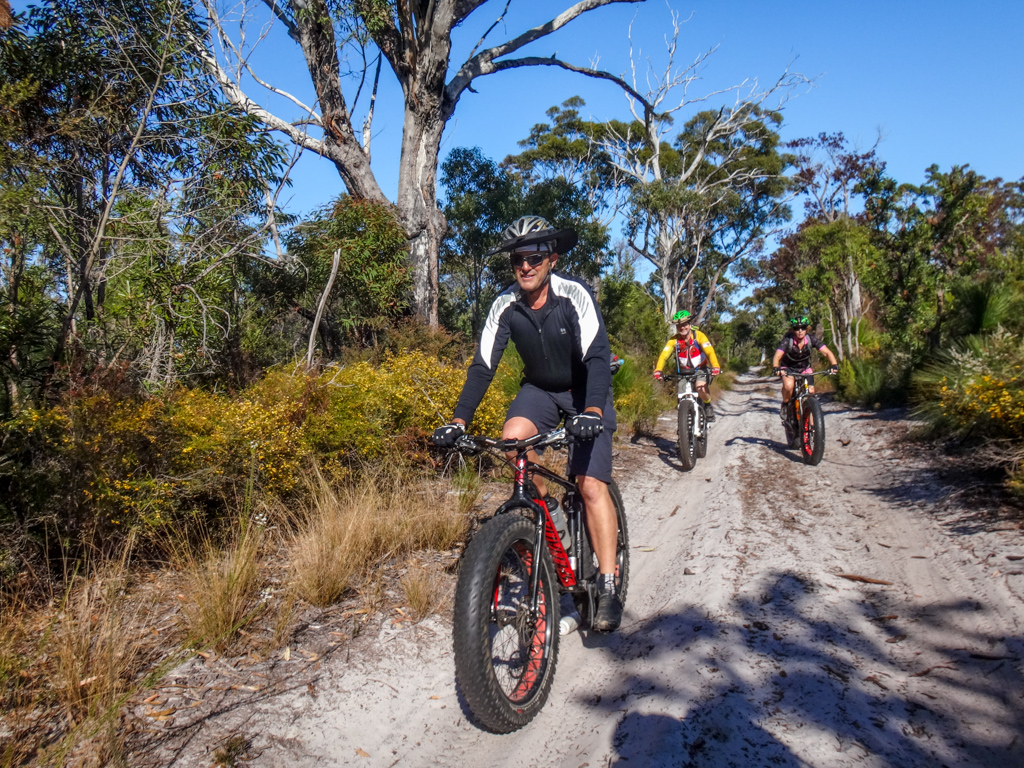 From here we left the paved road and followed a sandy track down the hill towards Brown Lake. 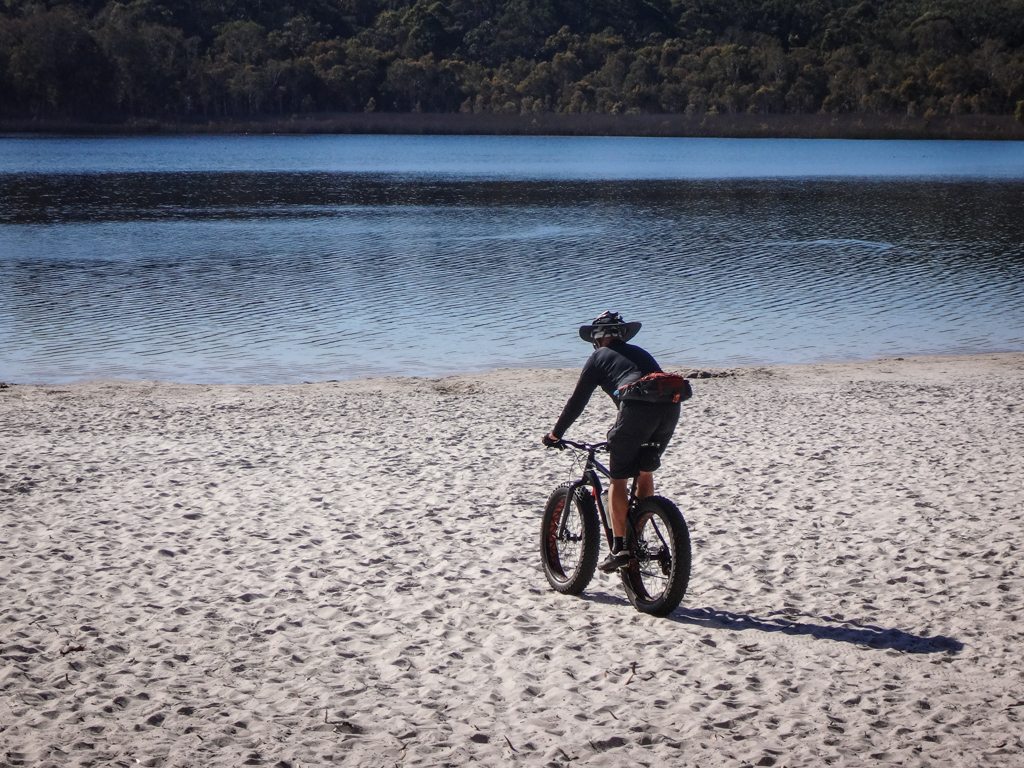 Brown Lake is known as “Bummiera” by the local Quandamooka People.  Their dreamtime stories tell of “Gabul” the huge carpet snake, who lived beneath the water.  The old people would call out before approaching the lake, as a sign of respect for the the spirit of “Gabul”. 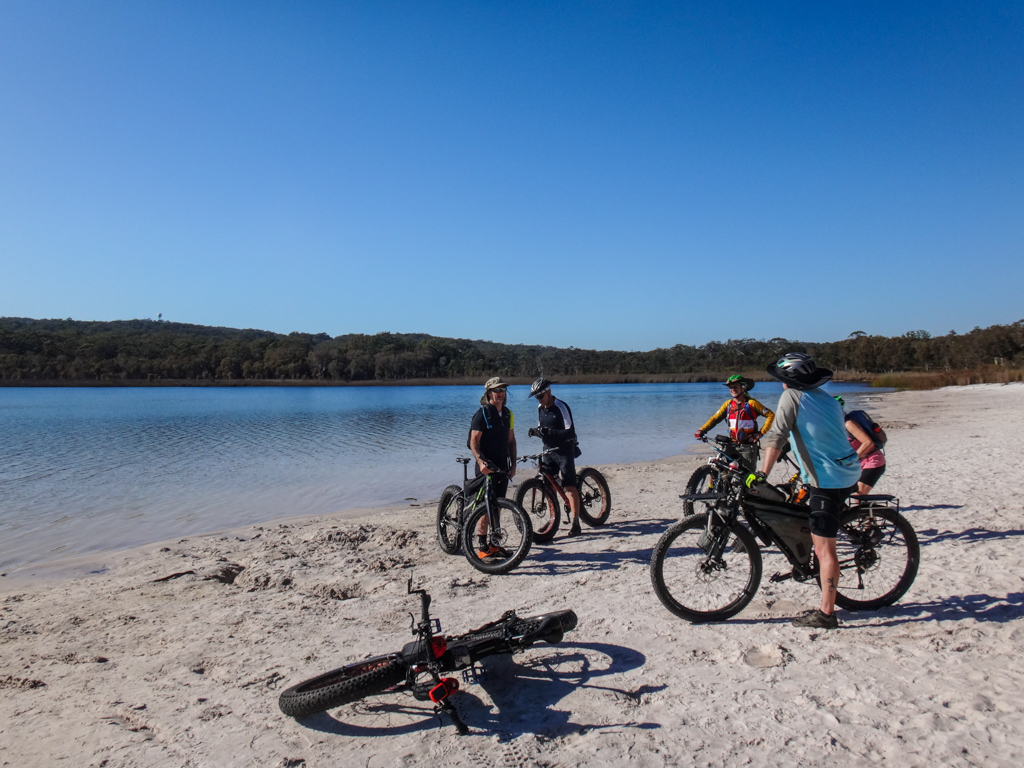 We stopped for a brief rest by the shoreline.

Gabul was silent today, and the water was calm, so we decided to send a selfie to our mate Darb who has moved back to cold Tasmania.  We thought he’d appreciate a photo of us all… 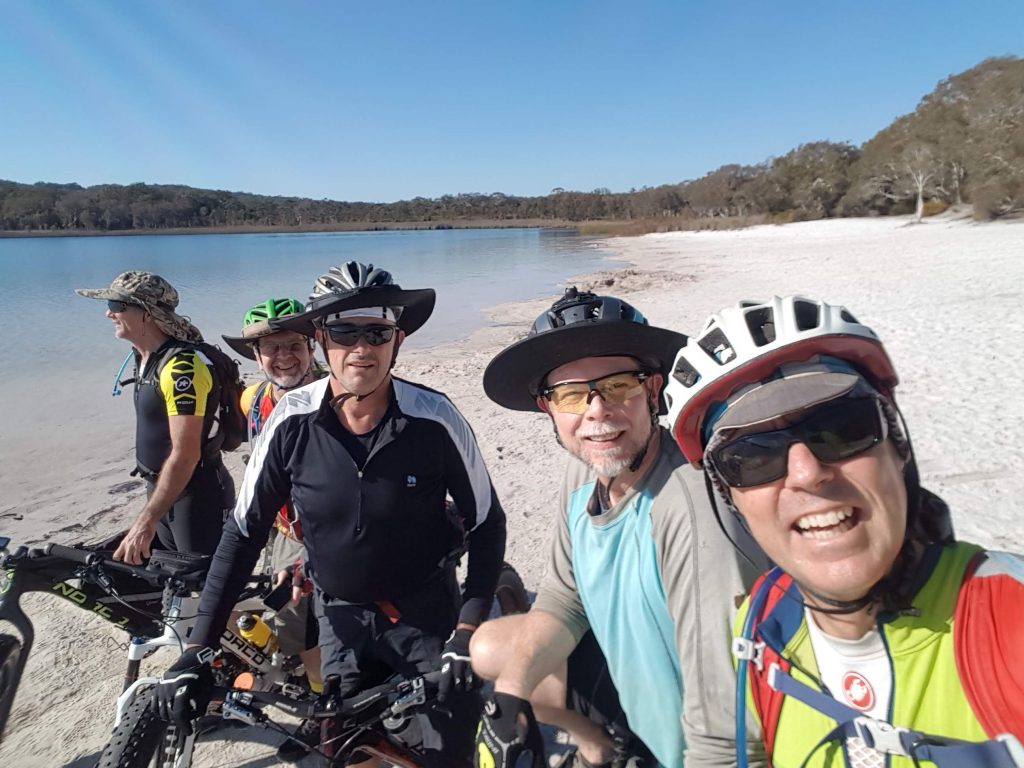 “Where the bloody hell are ya?” I messaged Darb, reminiscent of an old Tourism Australia Ad.

Quick as a flash he replied “Riding single tracks” and sent back a pic of a cold-looking pool in the Tasmanian bush. 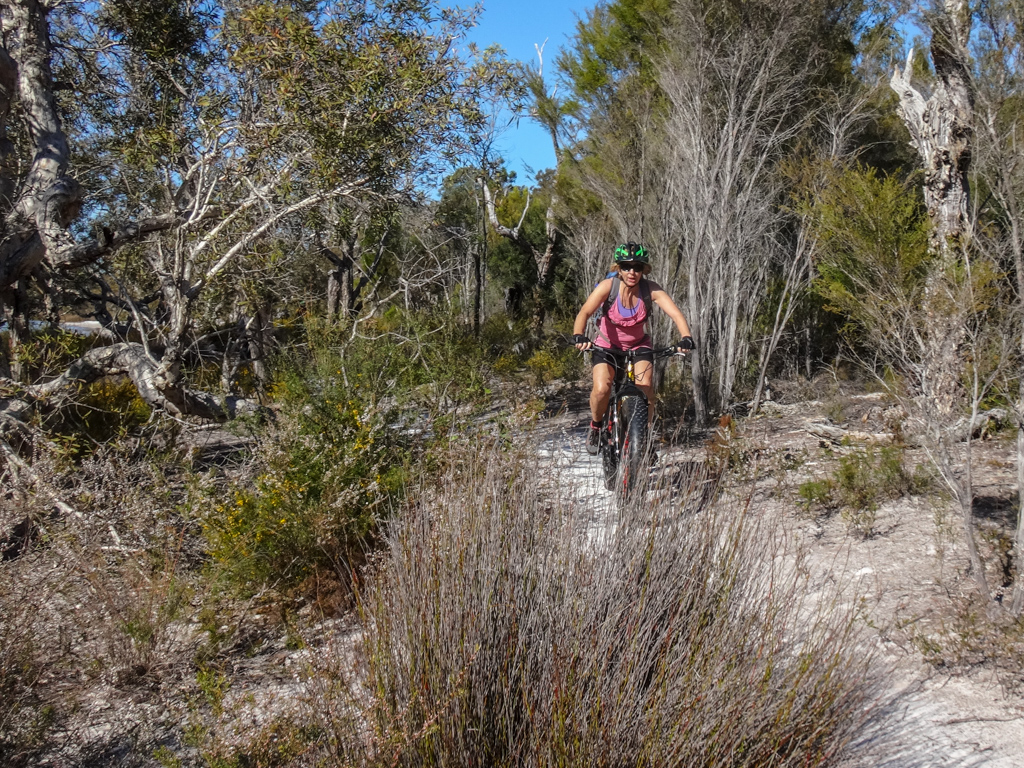 We followed the shoreline of the lake for a while.

I then suggested we take a “short cut” up the hill because it wouldn’t be as steep as the track we normally drag the bikes up. 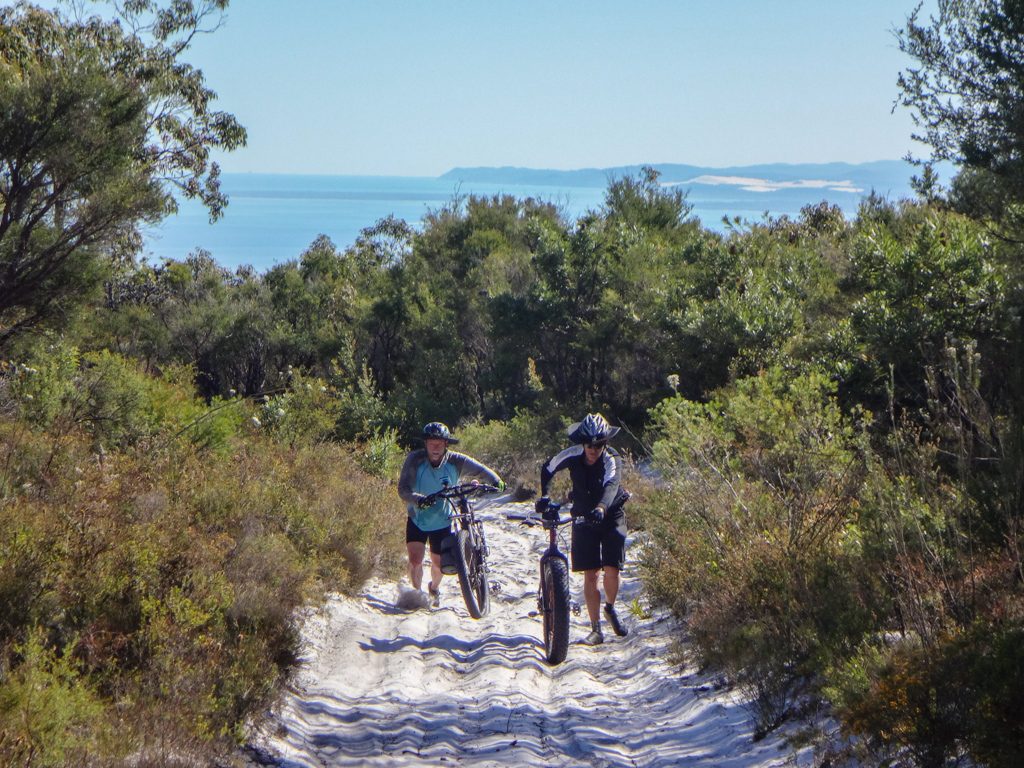 It was still steep – we dragged the bike up the “short cut” – but no one seemed to mind. 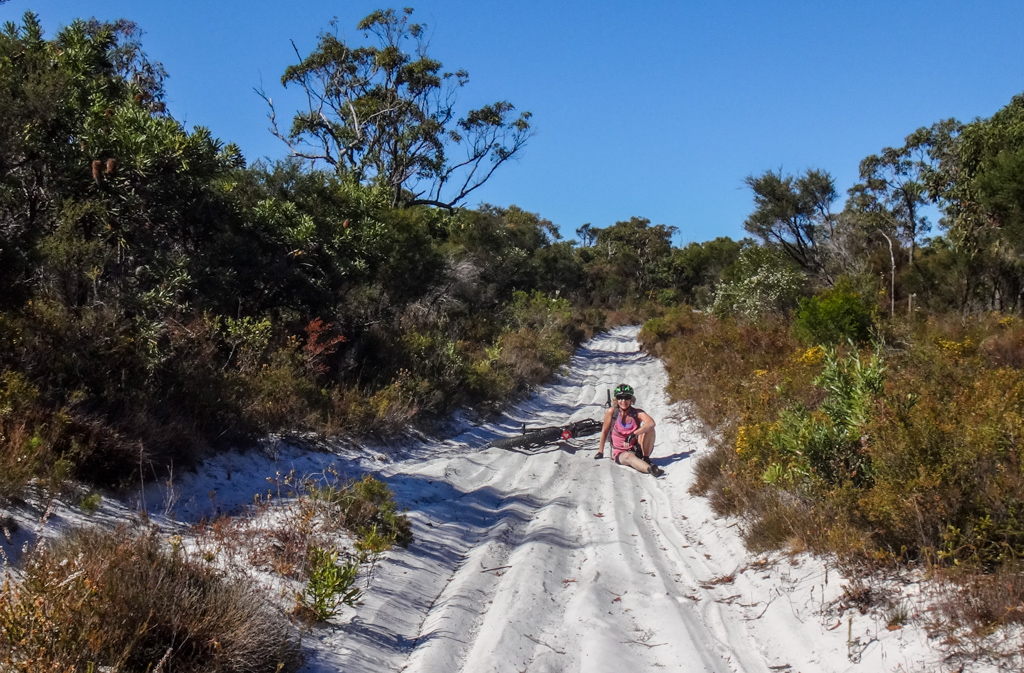 Kaye recently bought her first fat bike.  This was her first time on sand.  She fell off and laughed.  Sand is much more forgiving than rocky trails or roads.

At the top of the hill, a winding trail followed the top of north-south ridge line which ran the length of the island.  We could see for miles in every direction.

Eventually we had to ride down a really steep and sandy hill. 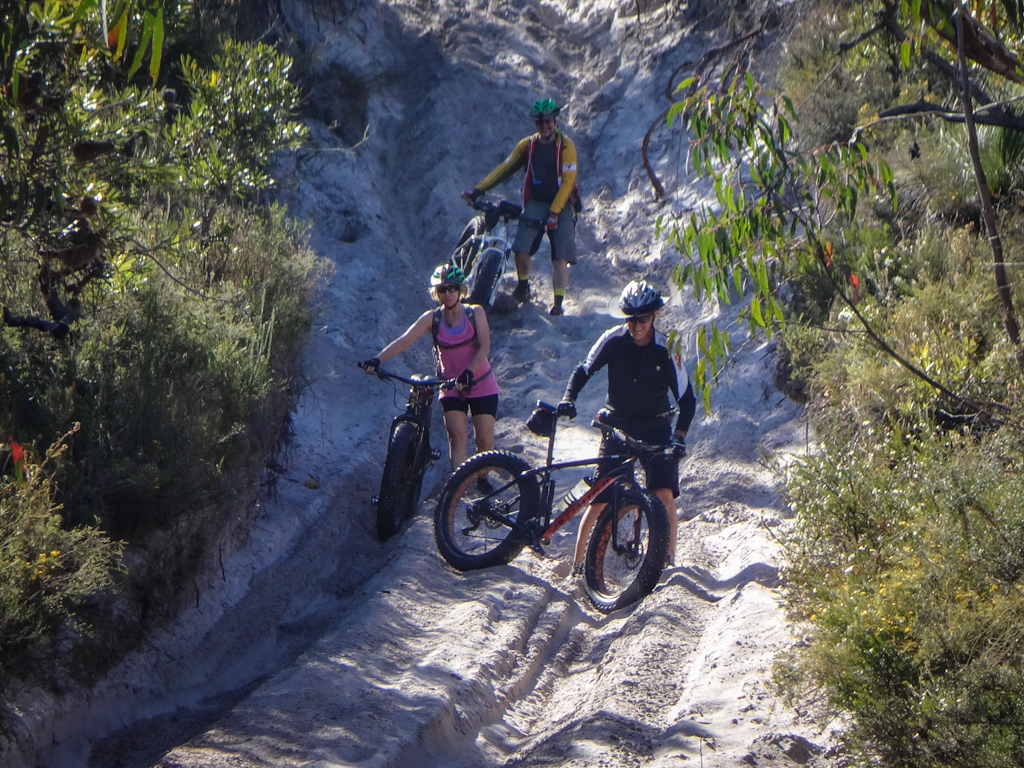 I managed to get halfway down before jumping off.

My shoes immediately filled with sand.

I laughed out loud.  That seems to happen a lot on fat bike rides. 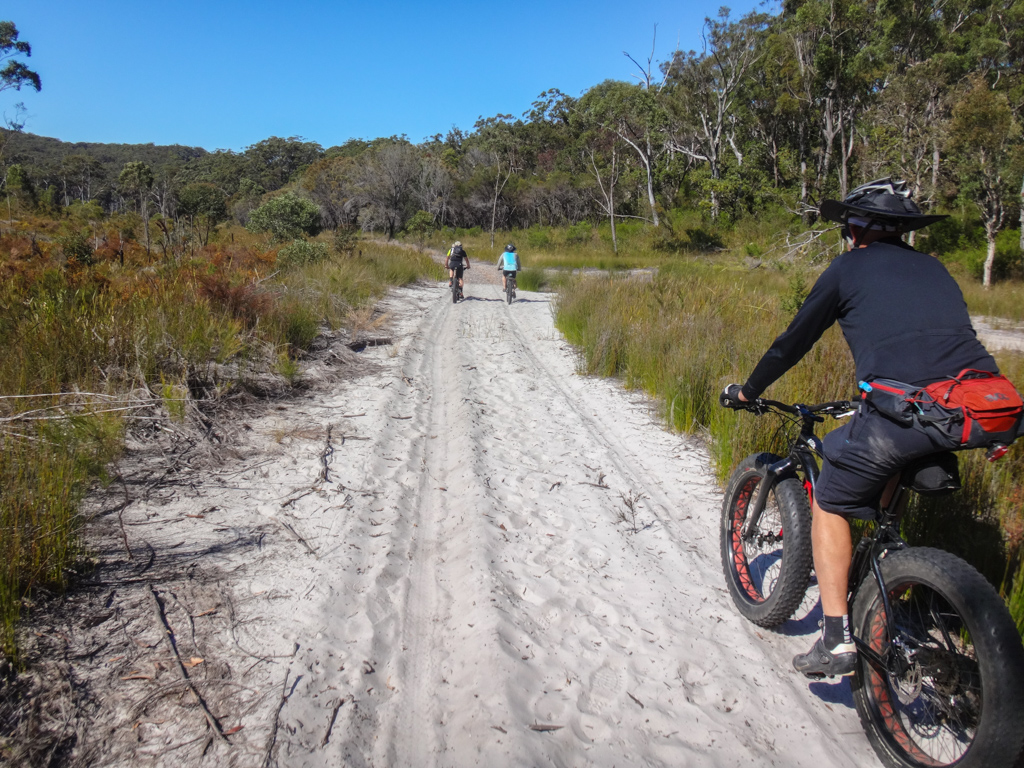 At the bottom of the hill we followed another sandy track past Tortoise Lagoon towards Blue Lake. 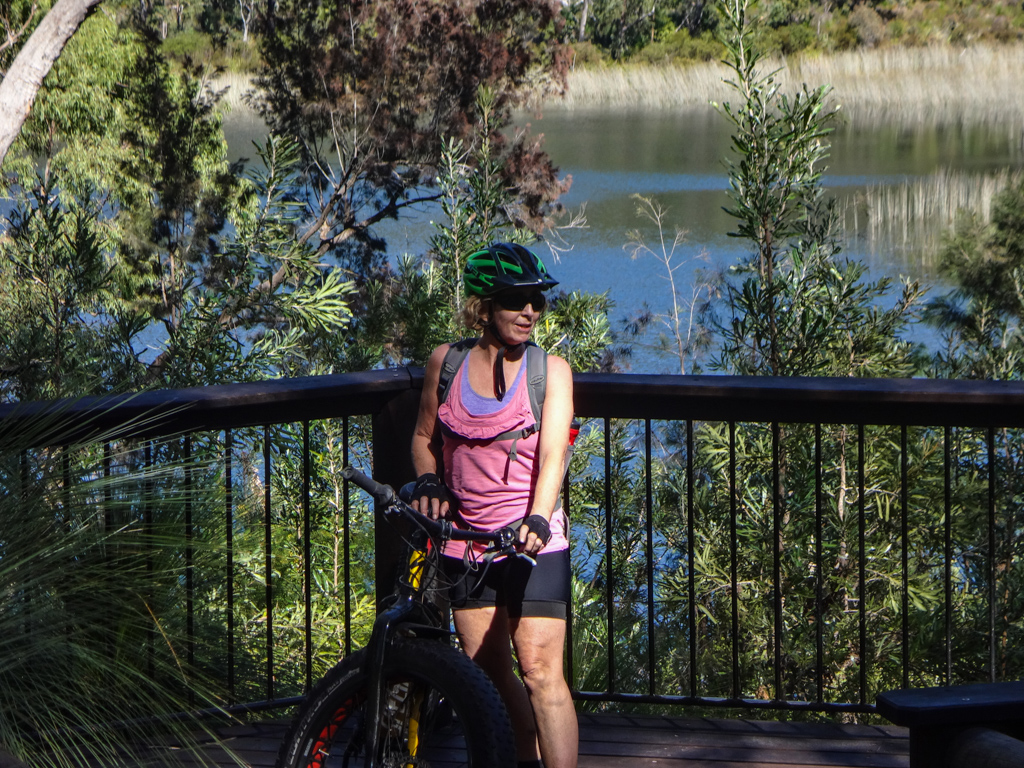 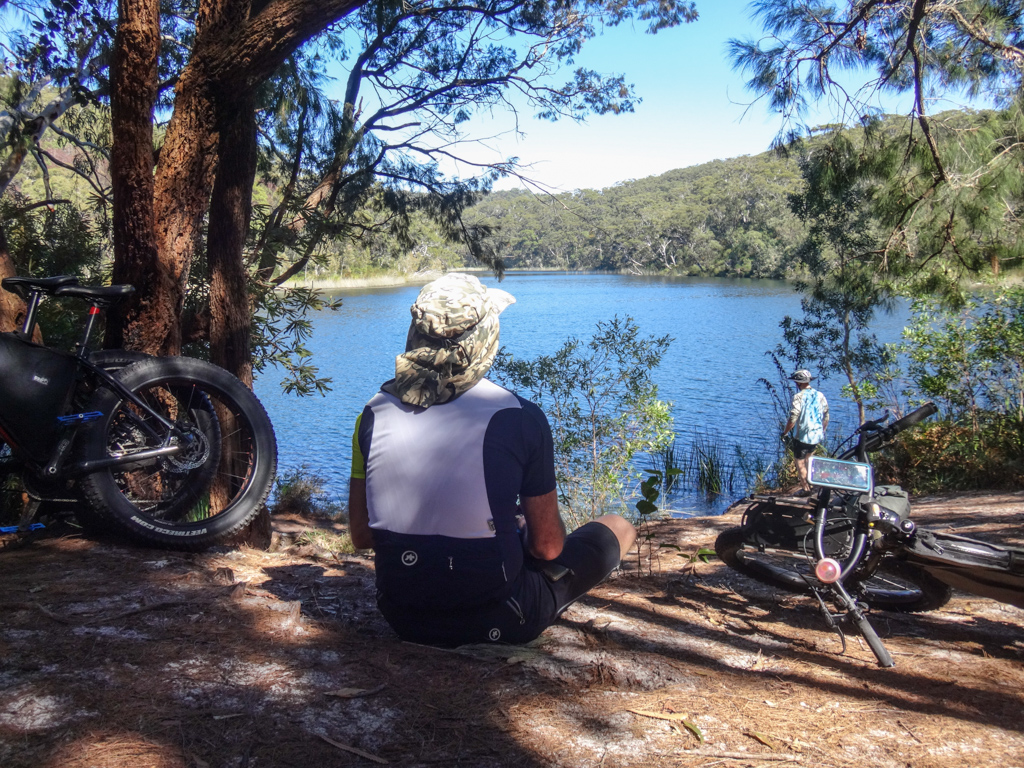 It was too cold to swim today, so we just sat by the shore and enjoyed the peaceful view across the water.

We left the lake and rode uphill towards Neembeeba lookout.  The track switched back and forth a few times but had an easy gradient.

I’ve ridden here via different tracks before, and I think this particular route is the easiest way up to the lookout. 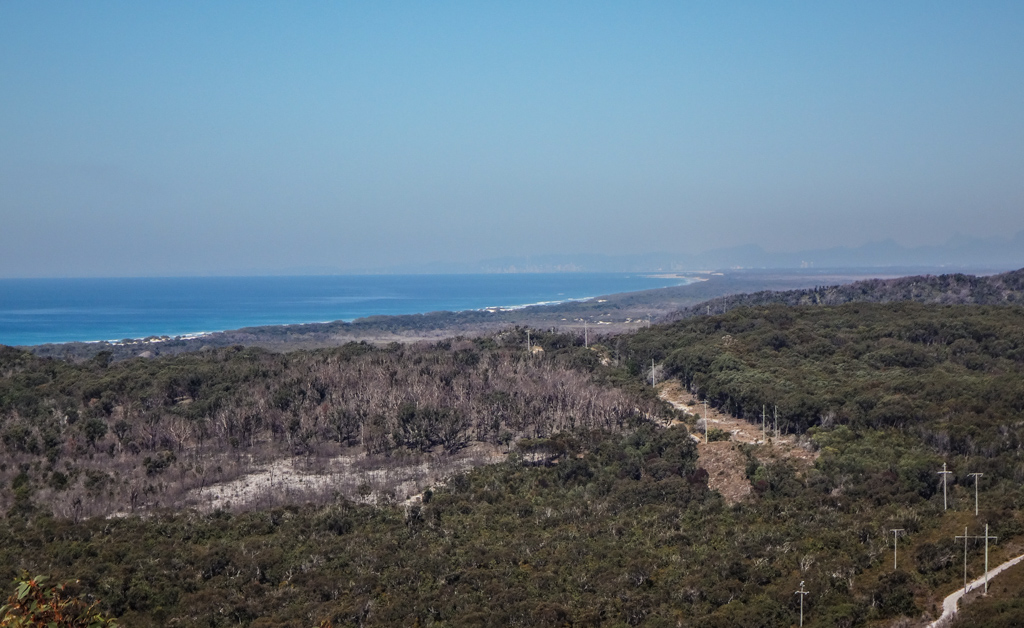 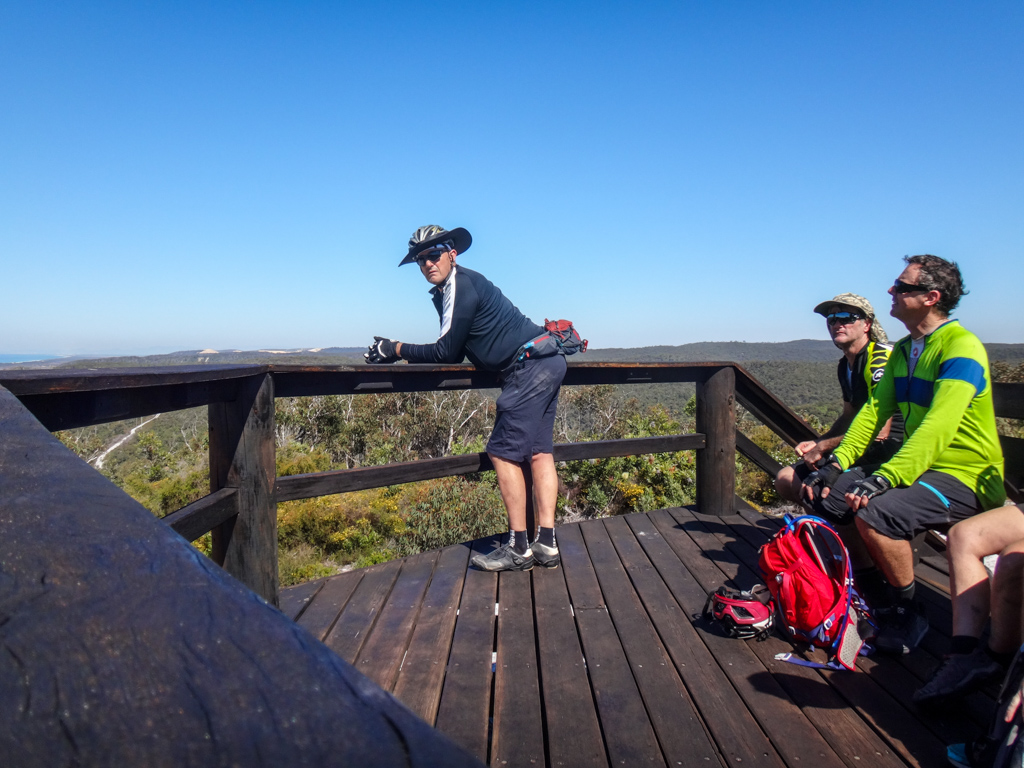 There were some amazing views from the top.

We could see all the way south to the Gold Coast. 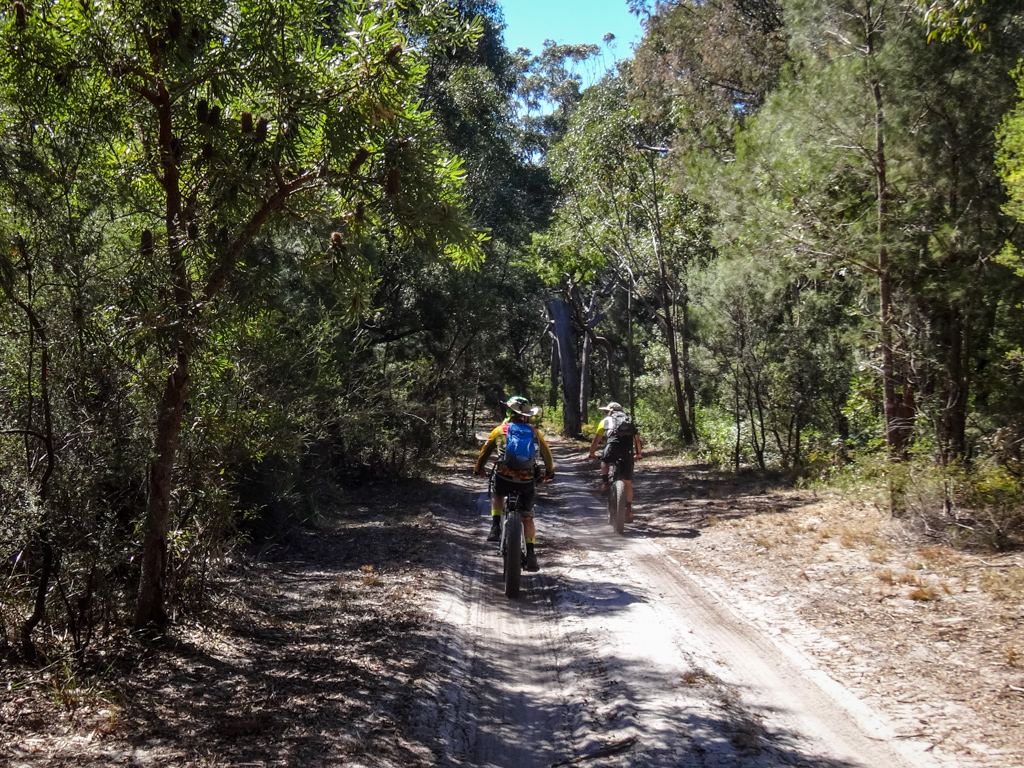 We rolled down the hill and onto the Tripod Track – which followed another ridge line northwards, parallel to the eastern beach.

When I was planning this ride, I noticed a high clearing for a mobile phone tower a couple of hundred metres from the main track, and thought it would be good to check out.

It was a bit overgrown, but we managed to ride most of it. 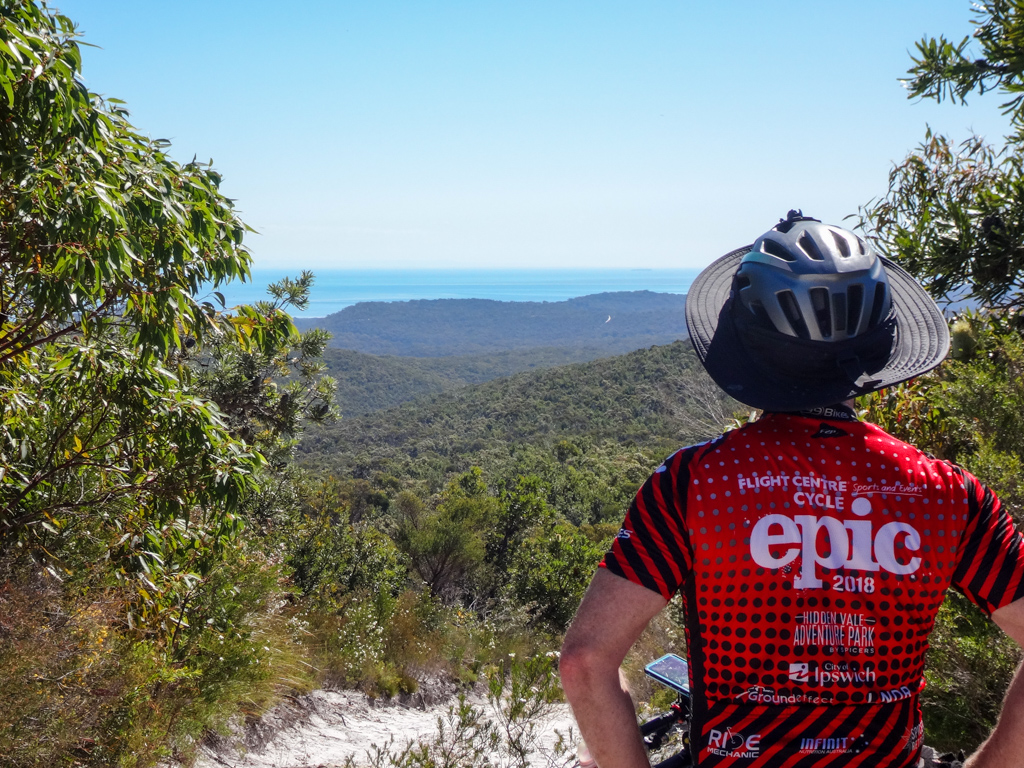 Yep – it was worth going to the top on a whim – more amazing views.

We coasted down the hill and back onto the Tripod Track to continue northwards.

A few kilometres later we arrived at Tripod Lookout.

The climb up to this high point was a bit tougher.  I pushed most of the way. 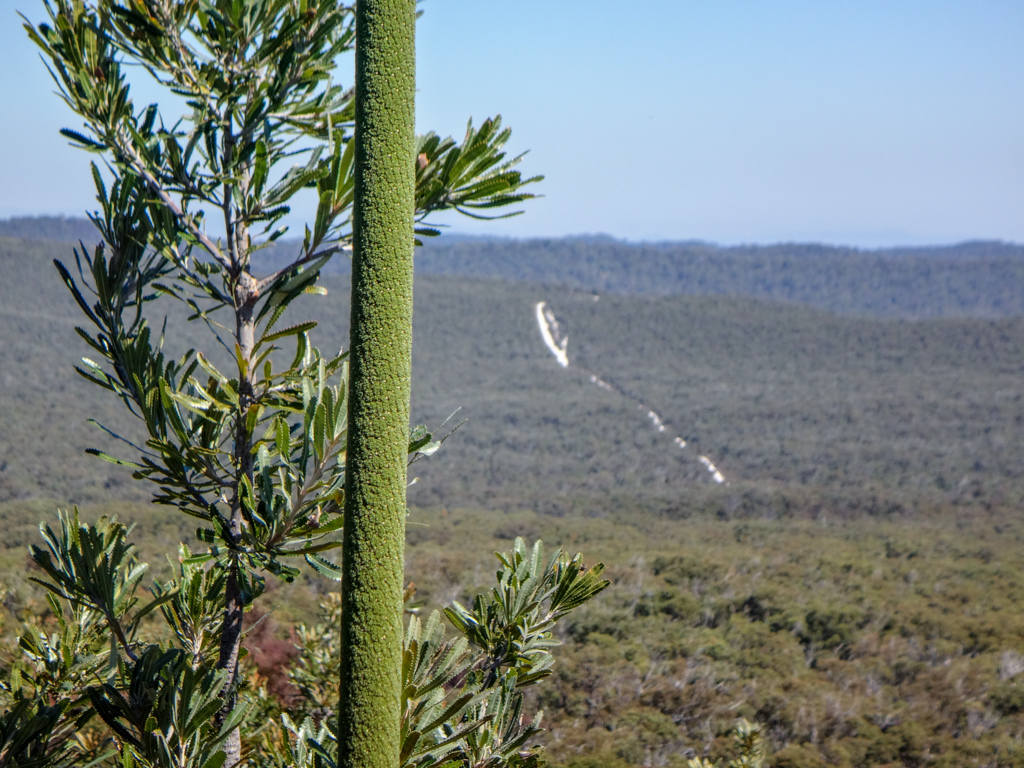 In the distance, through the trees, a steep sandy track cut across a far away hill.

There are so many places to explore on Straddie – too much for one day.

We coasted down the remaining soft sandy track to the main road to Point Lookout.

“What time does the ferry go?”, someone asked.

“In just over an hour” I replied.

We considered catching the later ferry.  There was so much more we hadn’t seen.

We’d already been riding over four hours, and had at least another half-hour ride back to the ferry, so we decided to call it a day and head back into town.

The rest of the tracks on Straddie would have to wait for another day.

We rode about forty kilometres in about five and a half hours.

Most of that was on sand.

During that time we climbed about 800 metres in elevation, and I burned about 2,000 kcal.

Thanks Jason G, Jason R, Russel, Kaye and Paul for a fun day out.

I can’t wait to get back and explore more of North Stradbroke Island.