Each time I visit Straddie I think to myself “Why have I waited so long to come back to this amazing place?”

After visiting for a quick overnighter last weekend, I indulgently decided go back a couple of days later.  Two ferry trips to North Stradbroke Island in less than a week is a new record for me.

Harrison and I packed some camping gear on our bikes and caught the ferry across the bay from Cleveland to Dunwich.

Twenty-five minutes later we headed up the hill from the One-Mile ferry terminal and had a quick stop at Brown Lake. 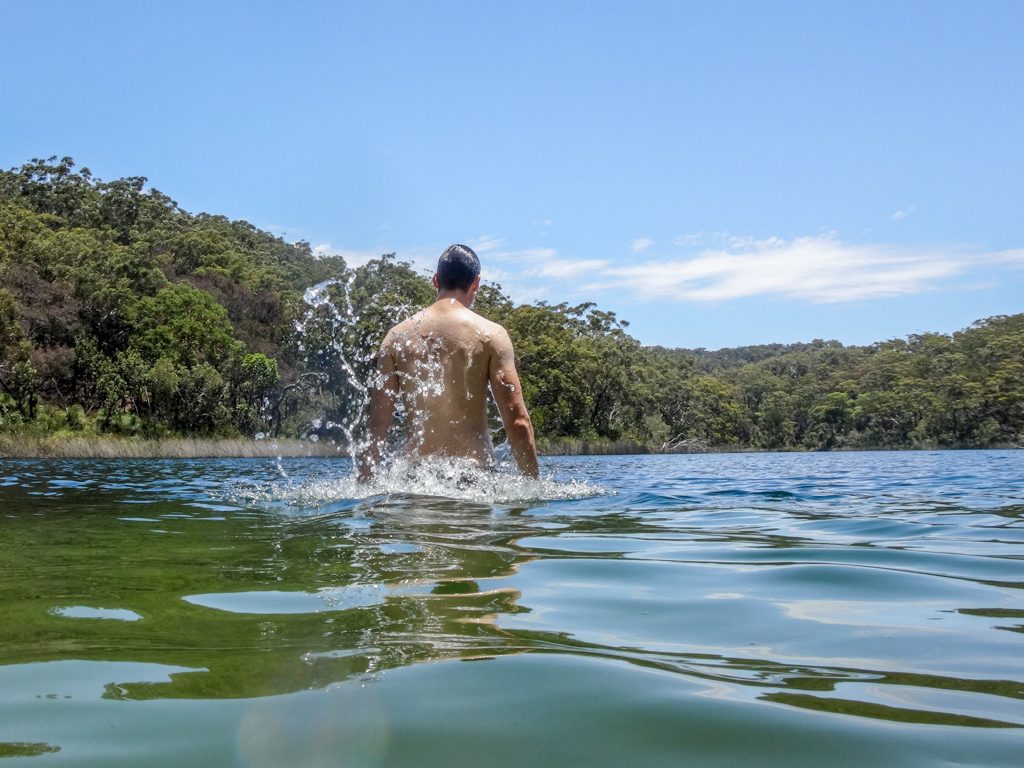 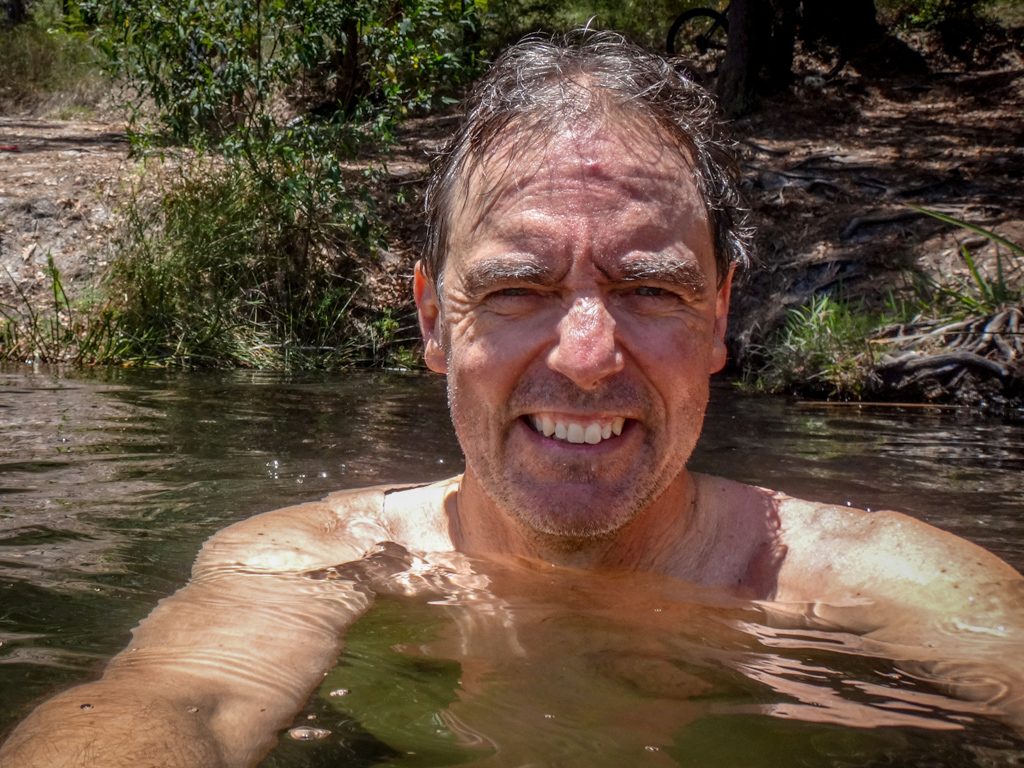 After a few more kilometres of pedaling, we arrived at Blue Lake with its clear fresh water.

Because it’s further away and harder to get to, there were fewer people here.  So we parked the bikes for a while and had a swim.

We were in no rush.  There wasn’t much further to ride, and we had lots of time.  Places like this are best enjoyed slowly.

Feeling refreshed, we jumped back on the bikes and followed the trail south from Blue Lake.  At one point the track disappeared under a knee-deep creek crossing.  Rather than splash through, we removed our shoes and waded across, carrying the bikes.

Harrison was impressed with the clarity of the water as small fish drifted around his ankles, nibbling his feet.

I’m amazed at how much fresh water there is on Straddie.  It boasts an intricate network of more than one hundred lakes, including the Eighteen Mile Swamp – the largest freshwater sedgeland lake in the world.

We refilled our water bottles and had lunch on a shady creek bank near to where it flowed into the swamp.

Not far from there, a vehicle track led us to the beach.

Harrison had to trudge through soft sand.  His tyres were skinnier than mine which made it impossible for him to pedal through the powdery stuff.

The firm damp sand was much easier to ride on.

With the wind at our backs we rode along the beach effortlessly.

We set up our camp by the edge of a lake just before gentle rain started fall.

The sun slowly set behind trees to the west.

What a stunning spot!

March Flies and mosquitoes descended upon us, trying to consume us.

The insect repellent didn’t work, so we lit a small fire and a few coils, then sat in the water to avoid the biting swarm – thankful that flies and mozzies can’t swim.

The lake turned into a mirror in the stillness.

We were in the right place tonight!

25 kilometres in four hours with about 390 metres in elevation.

The hardest part was riding up the hill out of Dunwich.

The following morning we faced a challenge:

The tide was rising quickly, and we still had a reasonable distance to ride before we reached Point Lookout.

I figured we had no more than three quarters of an hour before the incoming waves rendered the beach unrideable.

We skipped breakfast.  Packed our gear as quickly as we could, and rode north.

It was a short hard slog.

Our legs worked intensely.  The waves splashed the bikes a couple of times.  Harrison had to walk occasionally on the soft sand, but we made it.

We sat for a while on the clifftops at Point Lookout, admiring the local wildlife, and waiting for a cafe to open so we could have breakfast.

After our intense workout we decided our camp food wouldn’t cut it, and opted for bacon and eggs instead.

With full fuel tanks we set off back towards the ferry.

The tide was now too high for us to ride on the beach, so we followed quiet bush tracks south towards Dunwich.

30 kilometres in four hours with about 200 metres in elevation.

This section rates 6 out of 10 on the tough-o-meter.

Apart from the hard slog up the beach on a rising tide, this was a reasonably easy ride.

The plan today was totally different from my ride earlier in the week:

We had a more favorable tide, so we wanted to get to the beach as quickly as possible to spend us much time as we could on the sand.

BUT savage wildfires had broken out on the southern half of the island – we might not be able to access the eastern beach.

We kept our plans flexible and decided to make it up as we went along.

Riding north from Dunwich, we avoided the paved roads where possible and followed bush tracks.

“Ah this looks familiar” I thought as we retraced some of the trails that Harrison and I had ridden a few days earlier.

A short while later we pushed through the trees near Amity, and onto the sand.

Flinders Beach stretched ahead of us along the northern coast of the island.

Fallen trees blocked the beach at a couple of spots.

We helped each other scramble over the logs.  It’s tricky work to lift a heavy fat bike over a tangle of branches – but much easier when you’re with friends.

Our tyres hummed on the damp sand.

I’ve often thought that if there was a collective noun for fat bikes it would be a “grumble”.

A herd of cattle, a murder of crows, an exaltation of larks, and… a grumble of fat bikes.

We grumbled eastward on the wide sandy beach.

When the wind is at your back, and the tides are favorable, it’s hard to think of any better place to ride.

We waved at happy “skinny bike” riders as they rolled past in the opposite direction.

We rode along the edge of the lagoon at Cylinder Beach, through the camp ground and up the headland towards Point Lookout.

I sat on the cliffs and enjoyed the stunning views from the headland.

We stopped for a quick snack at a local cafe and discussed our plans.

A lady from the State Emergency Service told us the the beach was closed to the south.  There wasn’t any way we’d be able to get back to Dunwich if we rode south.

No one seemed to mind – we finished our coffees and agreed to adjust our plans to suit the situation.  We’d just retrace our steps back to Amity and “make it up as we went along”.

We returned westwards for a while along Cylinder Beach.

A few kilometres later we left the beach and headed inland to follow the old Point Lookout Road.

Jason suggested we take a short detour to admire a small sandy gorge a few metres off the track.

Thanks Jason!  I wouldn’t have even known about this spot if you hadn’t mentioned it.

After ticking the impressive looking gorge off our list, we all rolled down the hill back onto the track.

This old road is a quiet way to get from Point Lookout to Amity without having to compete with cars on the busy road.

The sun had reached its zenith.  We were all hot, thirsty and hungry; and decided it was time for lunch at Amity.

This day was morphing into a leisurely outing.

Shortly after leaving Amity I got a flat tyre.

Without asking, a couple of mates helped me wrestle with my huge front wheel, remove the tube and put a new one in.

Everyone else followed the usual fat biking custom and offered friendly advice and commentary as they watched the entertainment.

Almost back to Dunwich, we stopped at Myora Springs for a quick swim in Capenbah Creek. 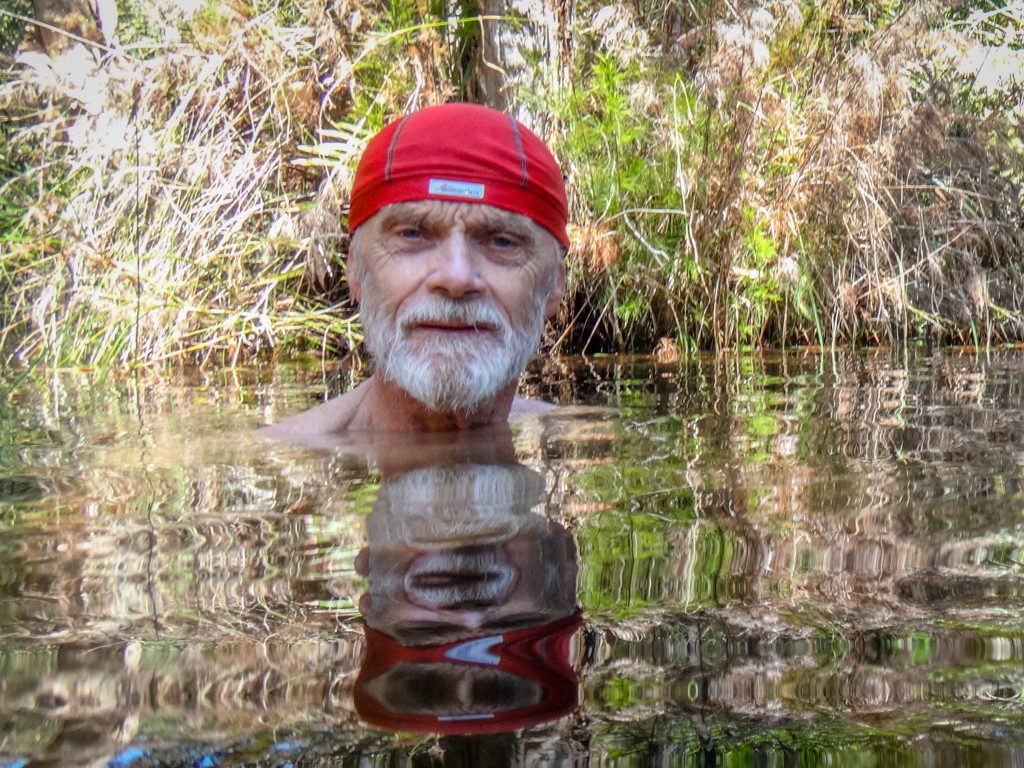 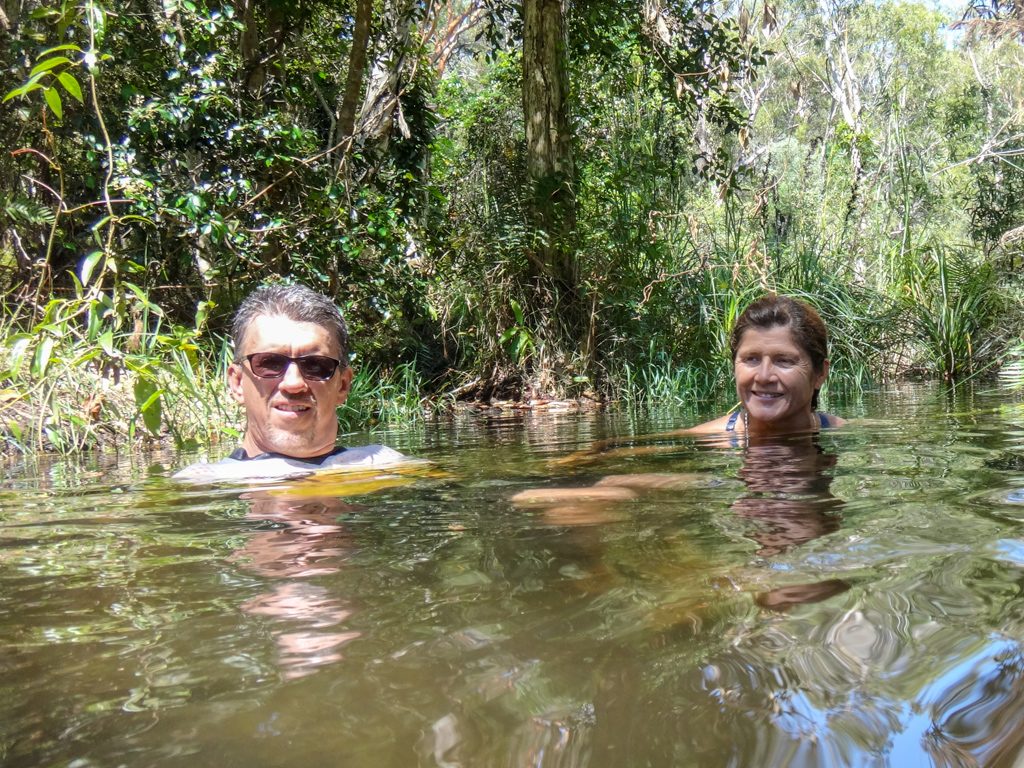 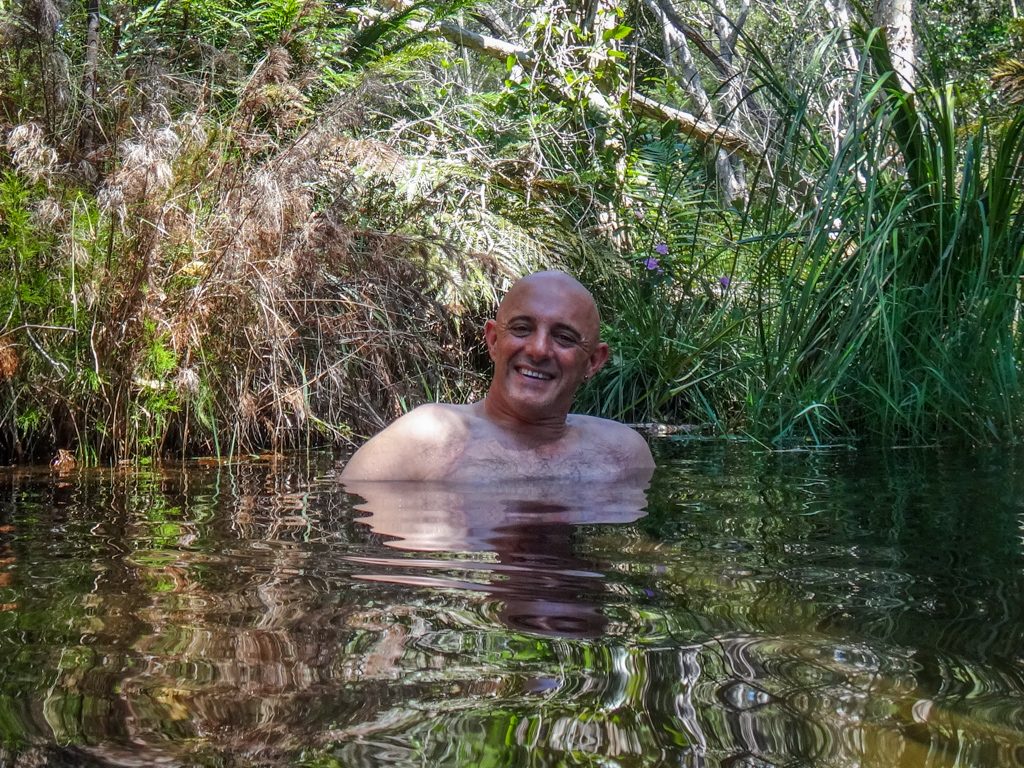 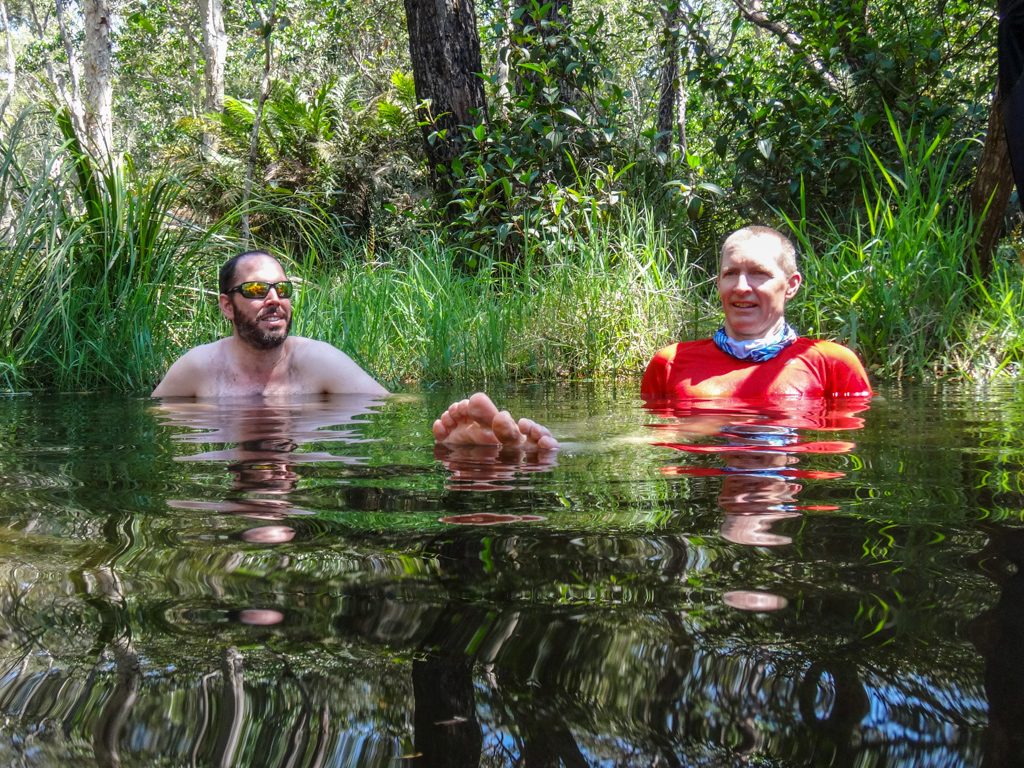 This place is unusual.  Downstream from the road the creek water is slightly salty.

Upstream from the road it’s fresh.

We jumped into the fresh water and cooled off.

Ahhh – this was perfect!

Happy, tired and slightly sunburned, we bundled a dozen bulky fat bikes on the back of the ferry and relaxed for the short trip home across the bay.

Thanks everyone for a great day out.

57 kilometres in almost seven hours with about 450 metres in elevation.

One Reply to “North Stradbroke Island”