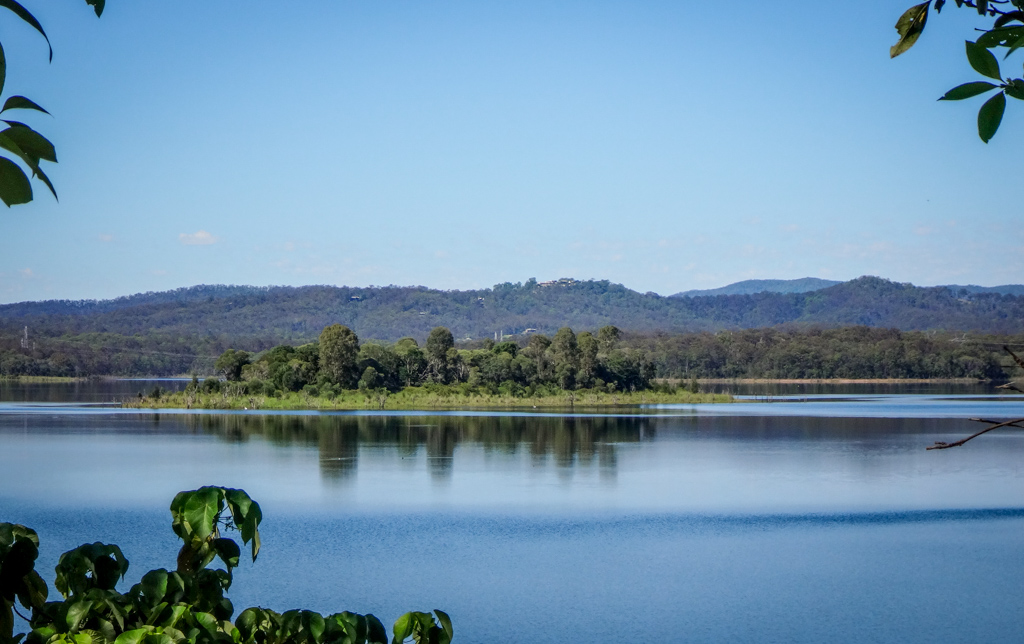 Most weeks we drive two or three hours to find a place where we’d like to ride our bikes.  Today we decided to stay close to home and enjoy some of the local highlights that we normally take for granted. 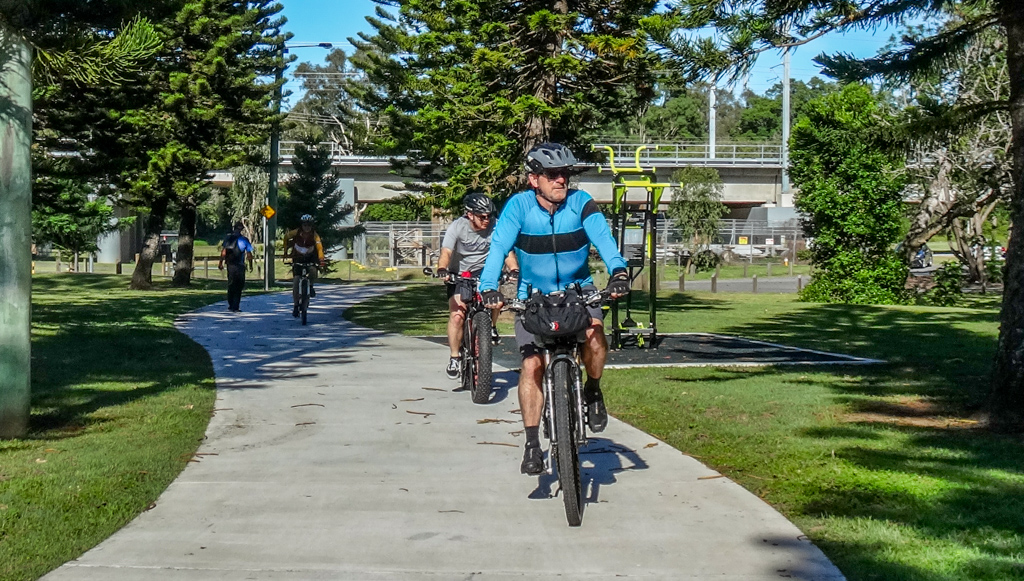 Instead of driving somewhere far away, we set off from my front door in search of some fun trails. 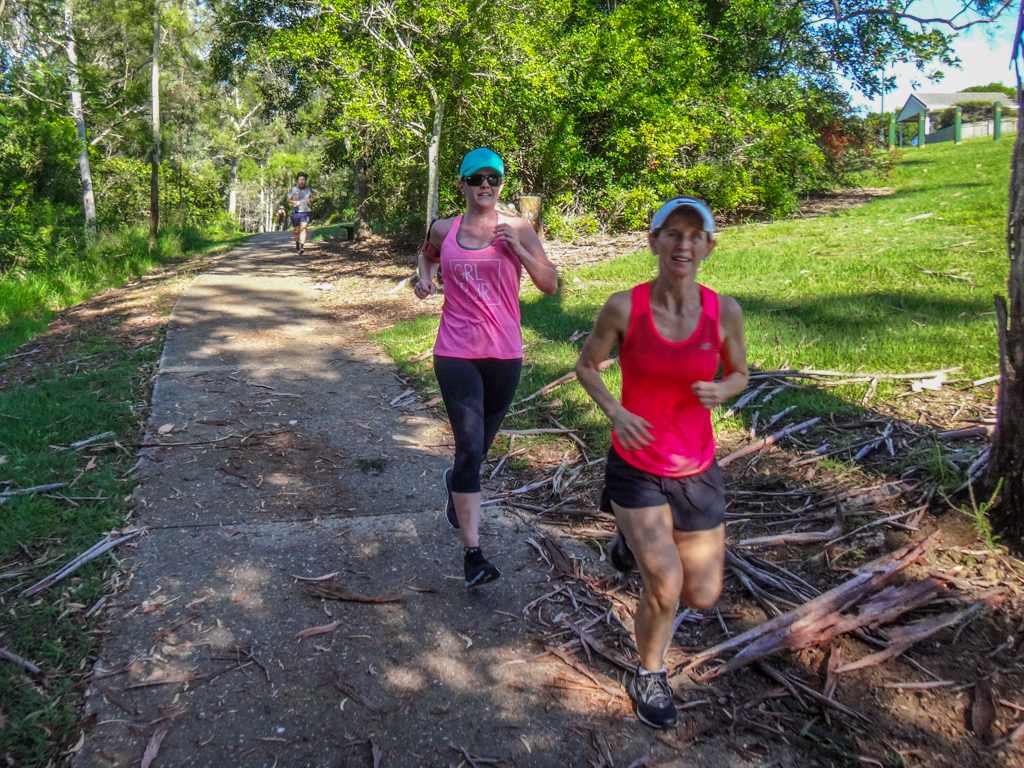 The weekly “Park run” had just started, so we tried to keep out of the way of happy joggers… 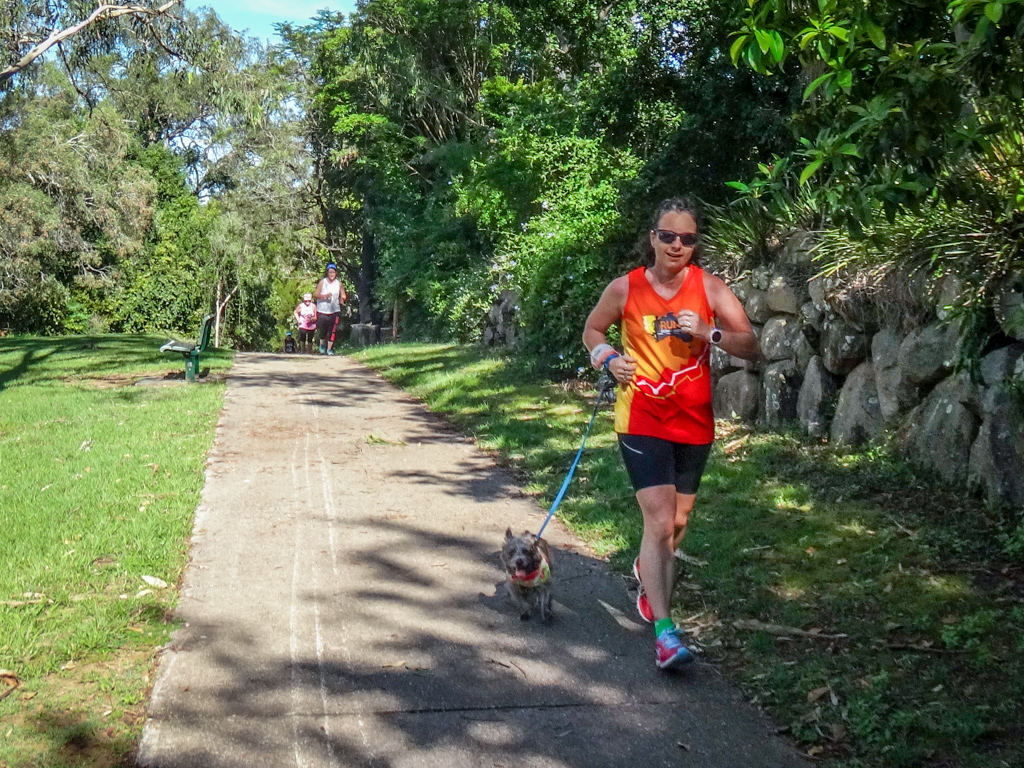 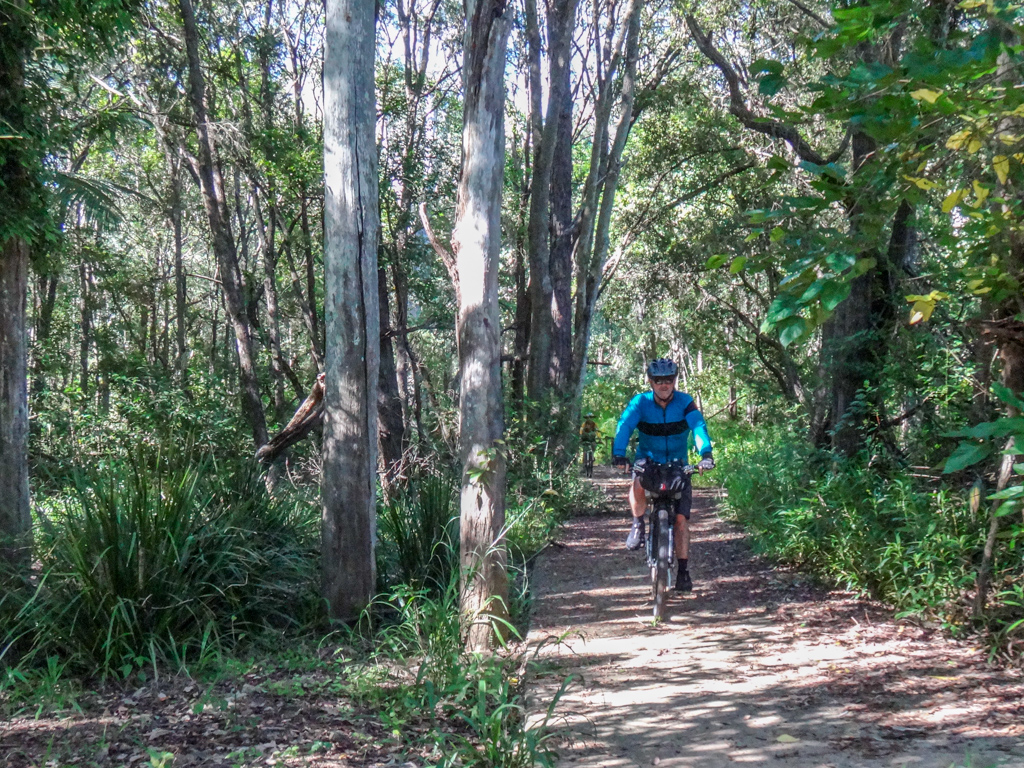 We followed the North Pine River for a while.  When it met Sideling Creek we rode beside that, following it towards the dam wall at Lake Kurwongbah. 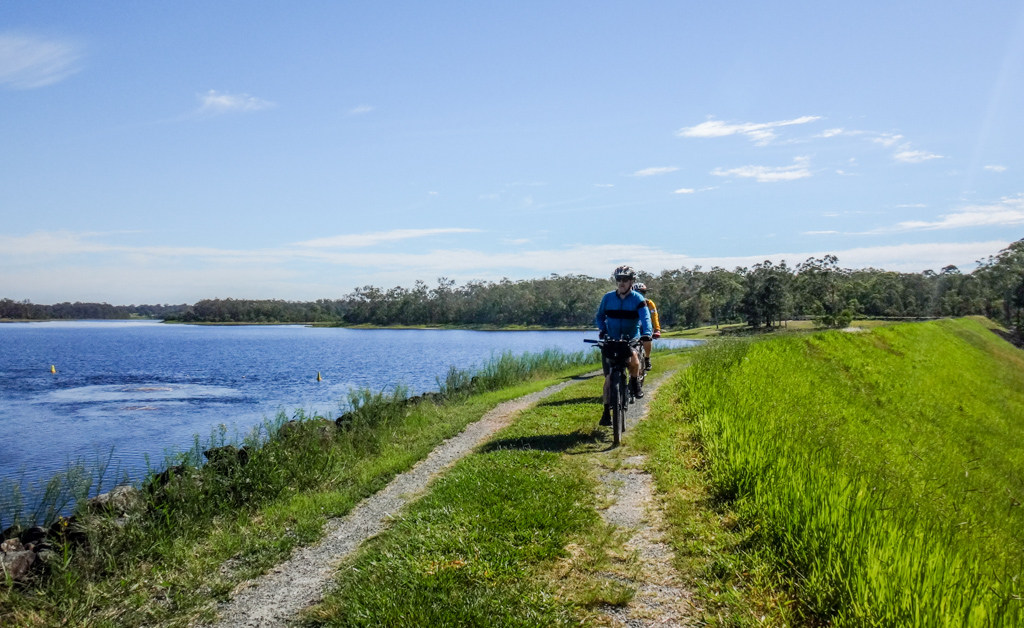 The dam is full.  On our right the water lapped on the rock wall.  On the left. the embankment dropped away sharply.

A few minutes later we arrived at Lake Samsonvale.  It’s only a couple of kilometres from Lake Kurwongbah.  We’re lucky to have so much water around here.

I gazed out towards the D’Aguilar Range on the western horizon and saw nothing but water, trees and hills.  Could we really be that close to civilization? 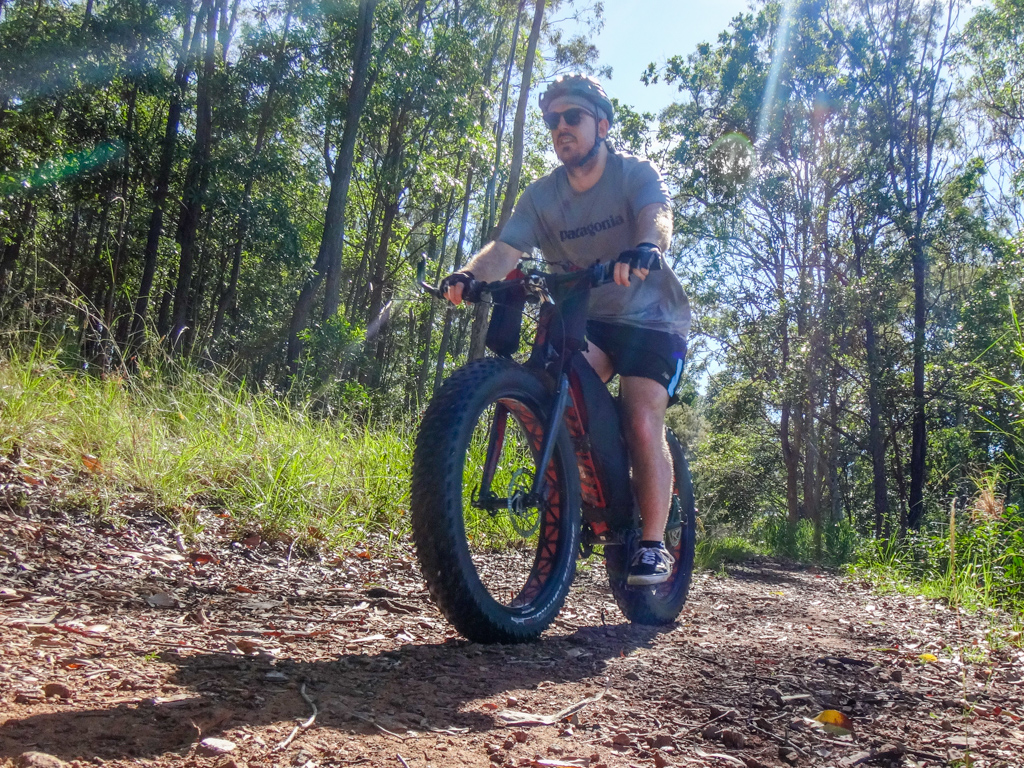 He had never ridden a fatty before but handled it perfectly as we rolled on to the dirt tracks beside the lake shore. 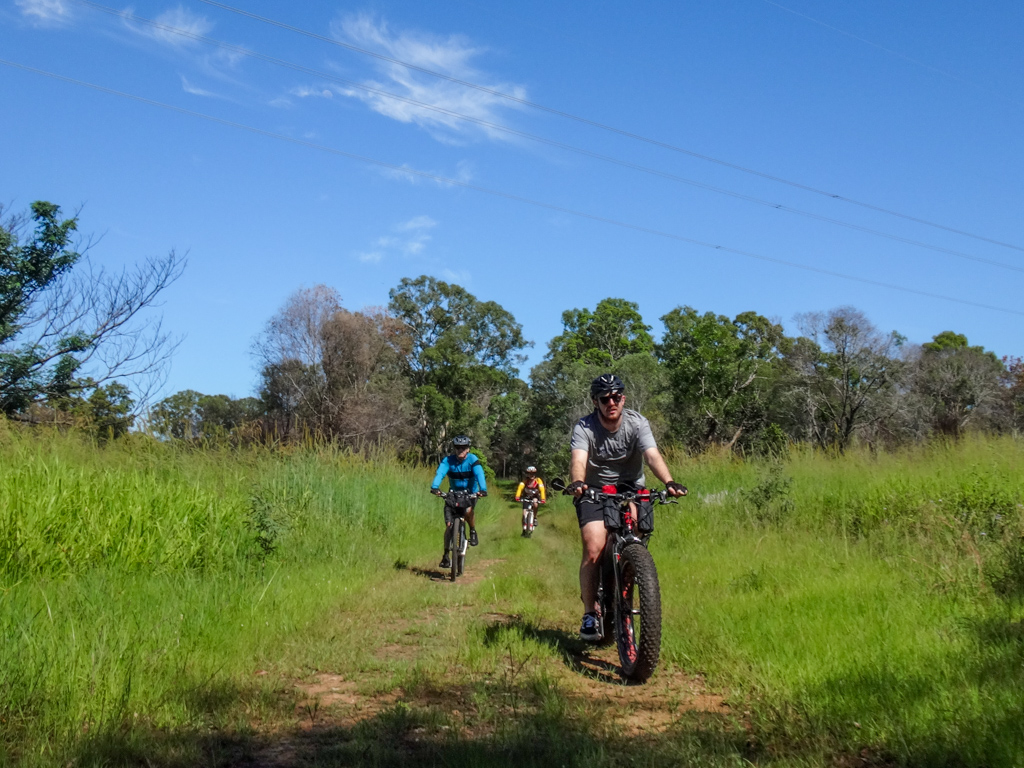 “Does anyone want a swim?” 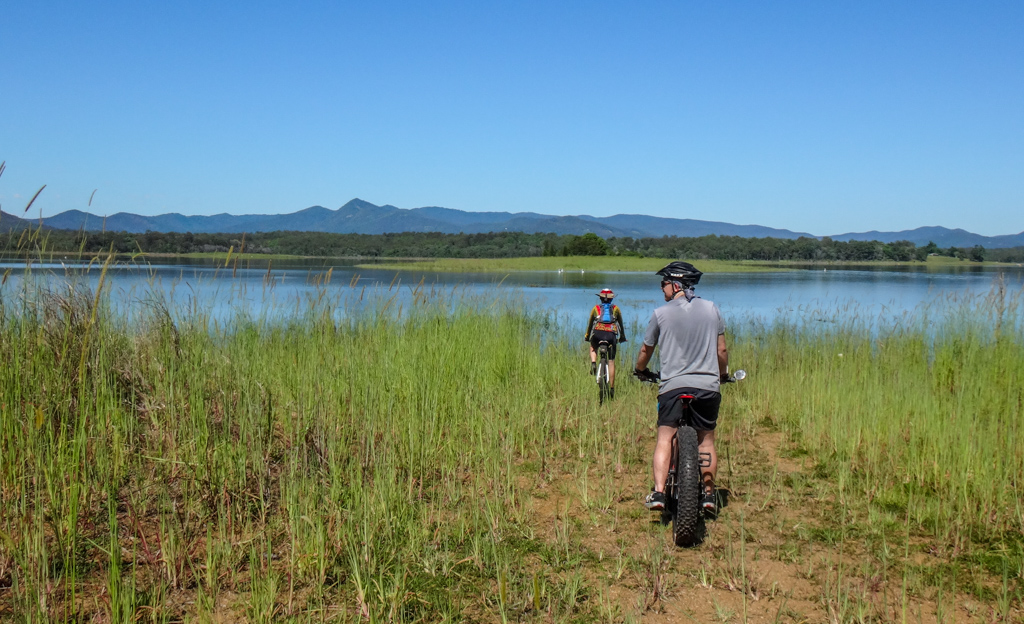 We followed another grassy trail to another section of the lake. 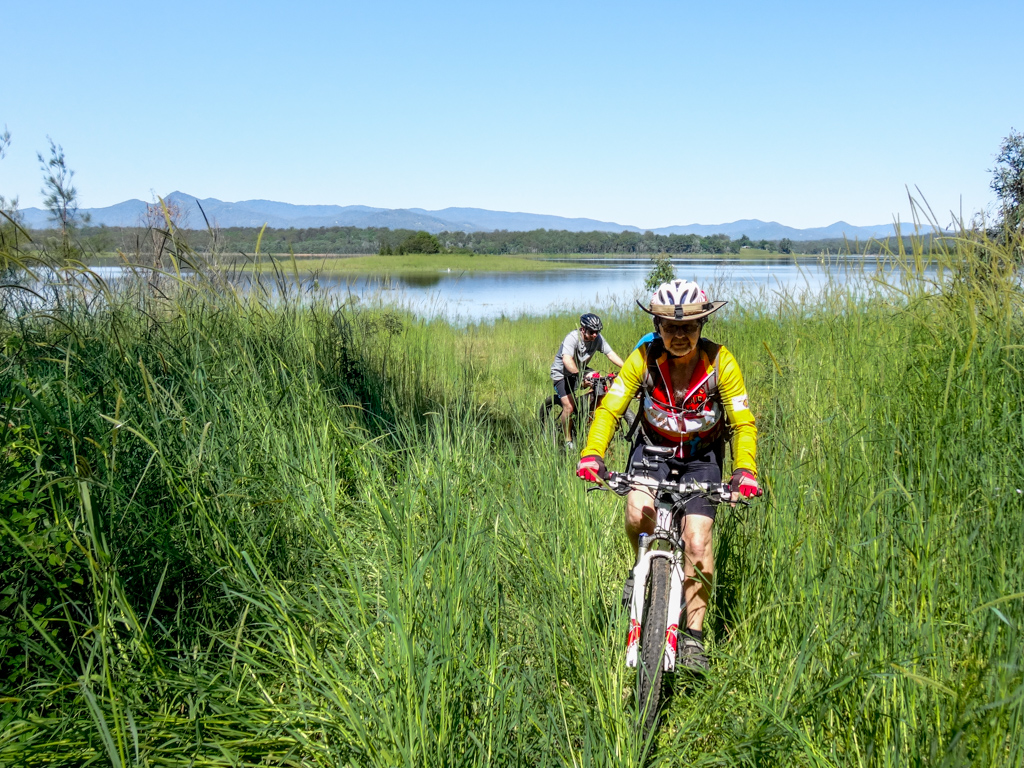 Still no one wanted to swim. 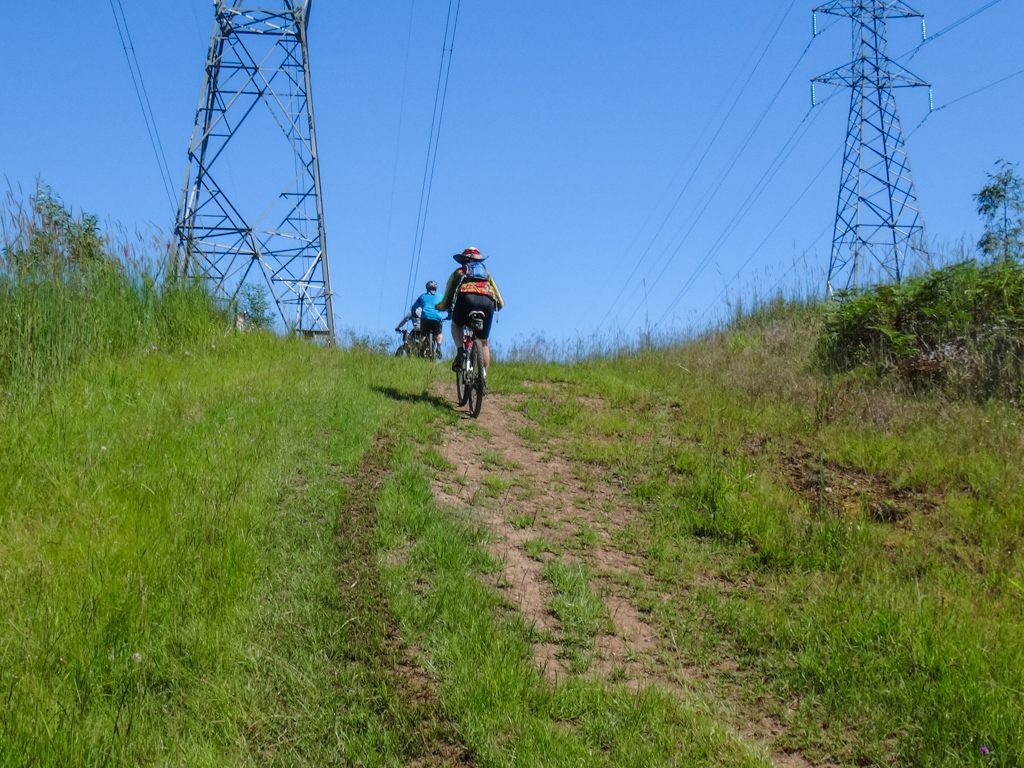 Some of the tracks under the power lines are steep.

Luke beat us to the top – even though his bike was heaviest.

“He’s got your climbing legs,” I said to Darb.

Speak for yourself Darb.  Somewhere under my ageing exterior is an excitable twenty-something.  I’m sure of it. 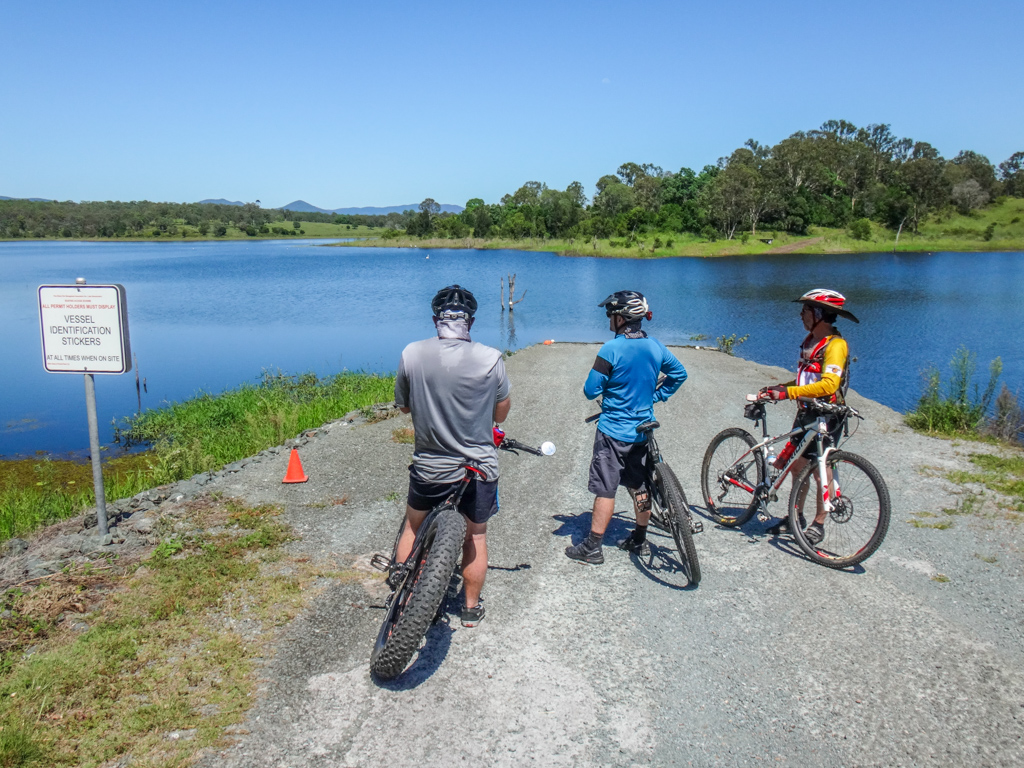 We followed another track down to another section of shore line.

Before the river was dammed, this used to be Adsetts Road.  It ran all the way to Rush Creek near Dayboro.

Sometimes when the water levels are low, the old road rises from the water.

I’m sure the Pelicans are grateful for all the extra water. 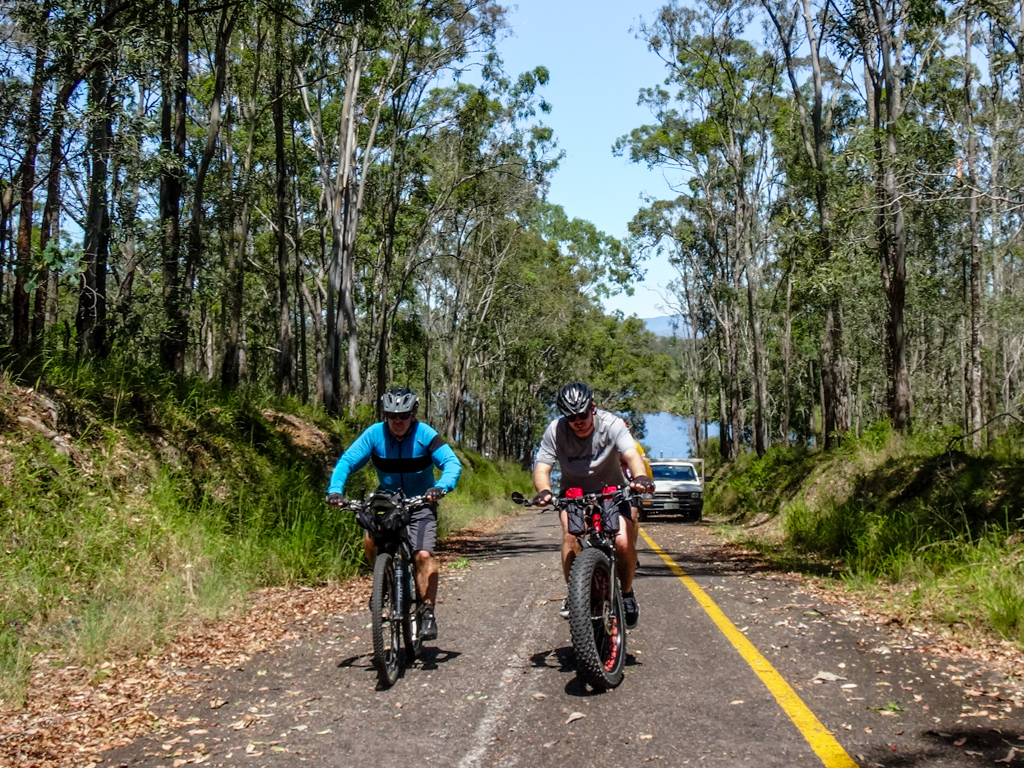 With our exploration of the Northern Shoreline over, we followed what remained of Adsetts Road back up the hill towards Petrie. 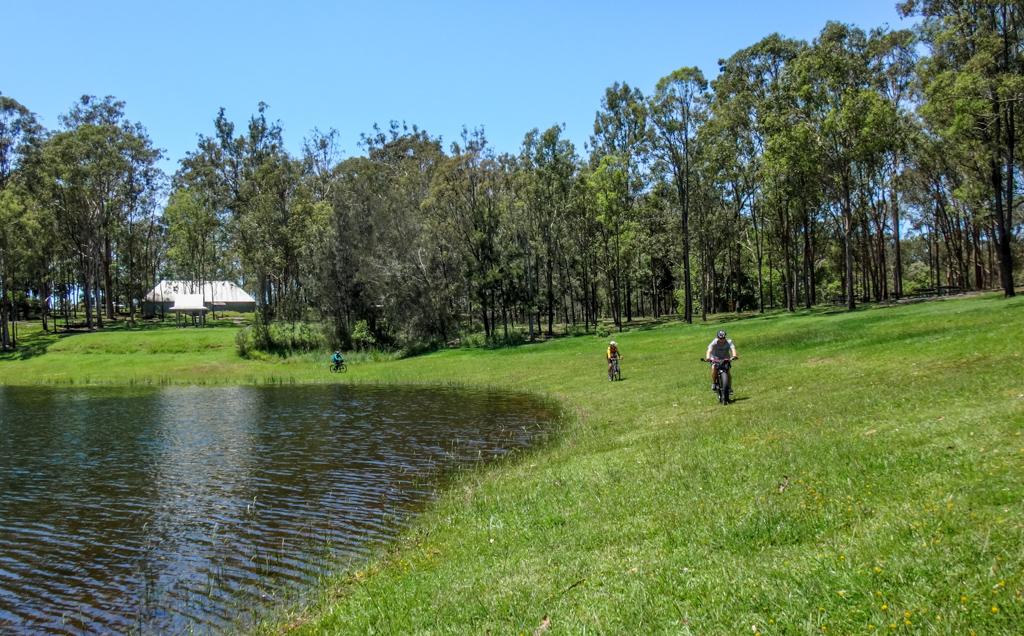 The eastern shoreline of Lake Samsonvale was more open and grassy.

We followed it around several small peninsulas. 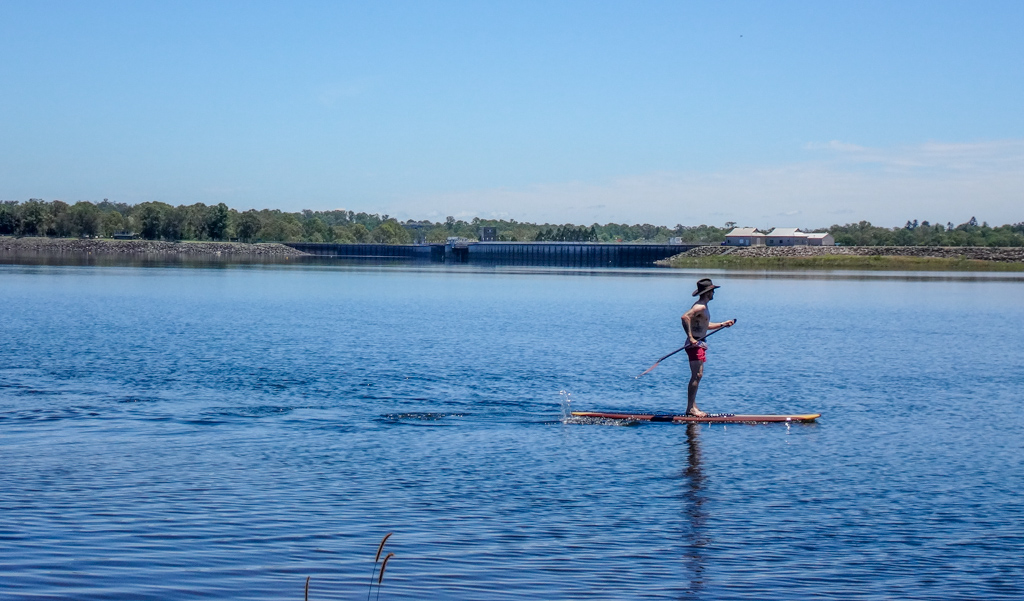 It’s a popular spot for family fun and picnics. 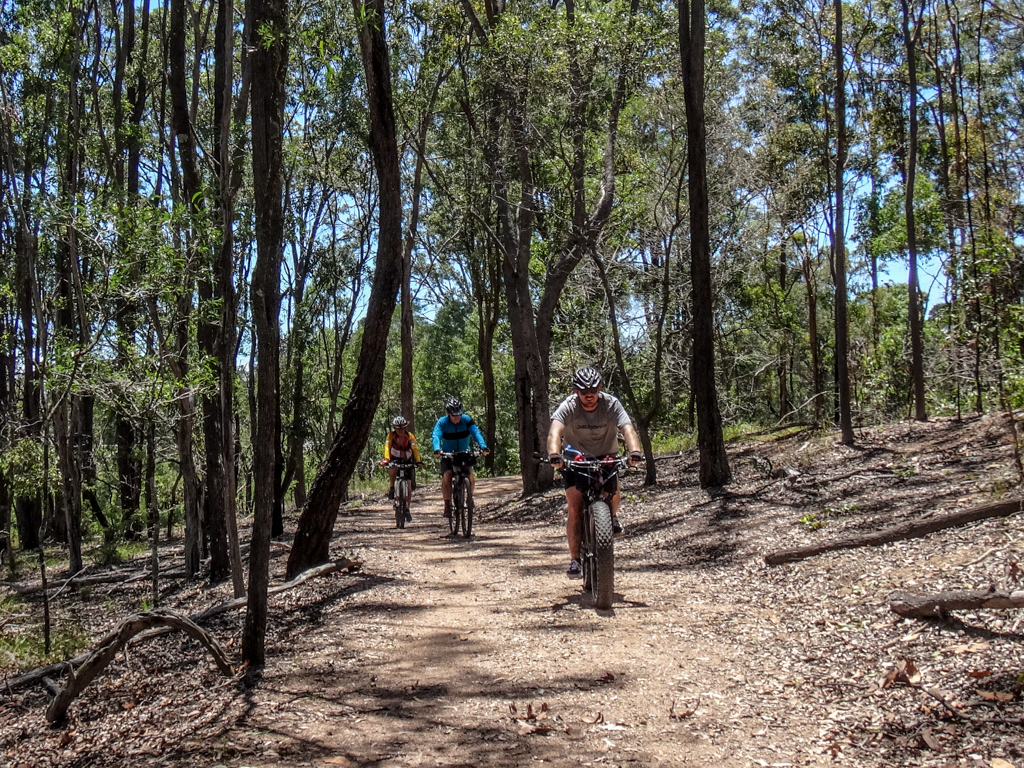 We left the open grassy shore for more dirt tracks through the trees. 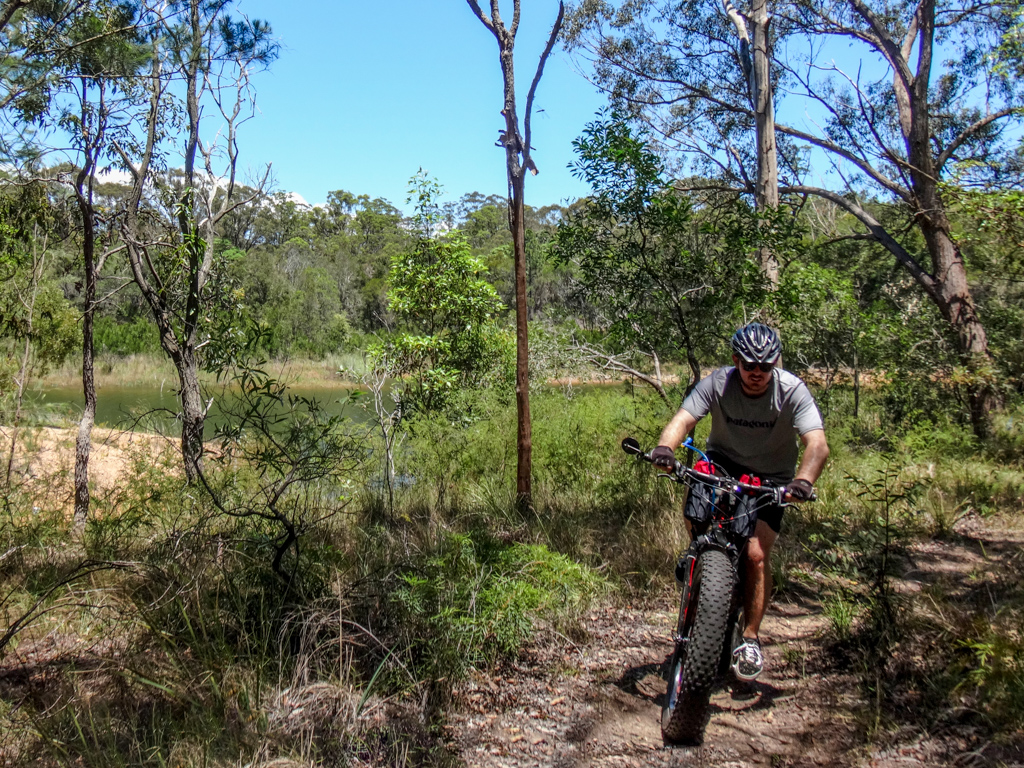 In some places the trail narrowed to a single track which snaked around tree stumps and over creek beds. 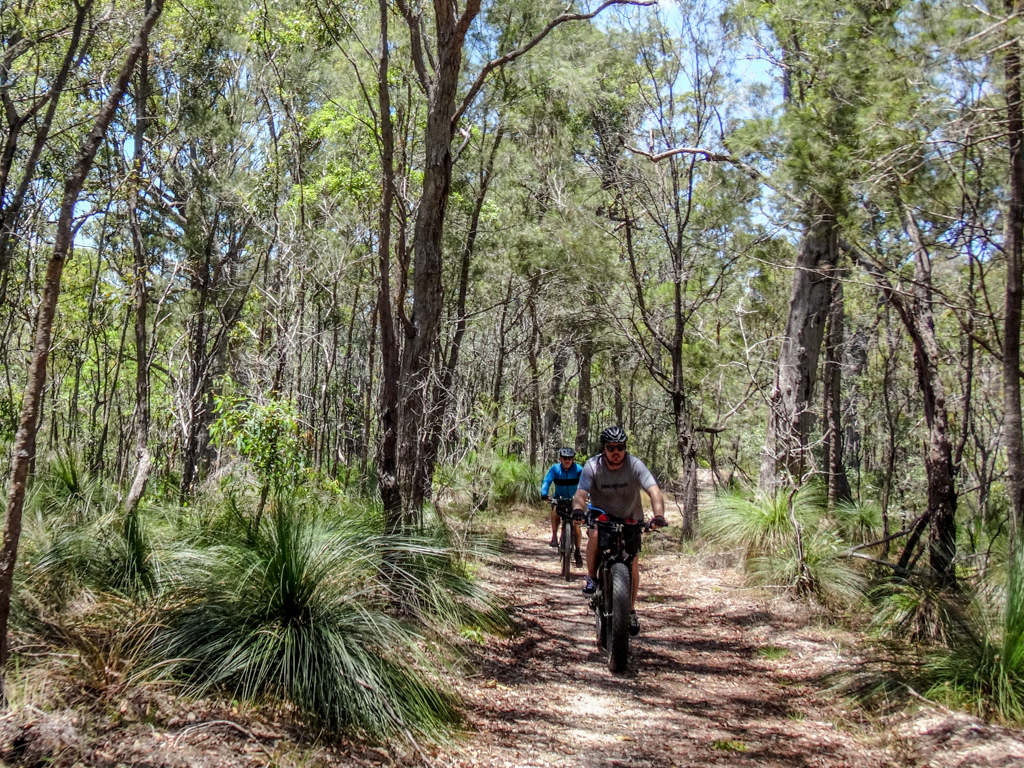 In other places, it broadened into a leafy avenue between grass trees. 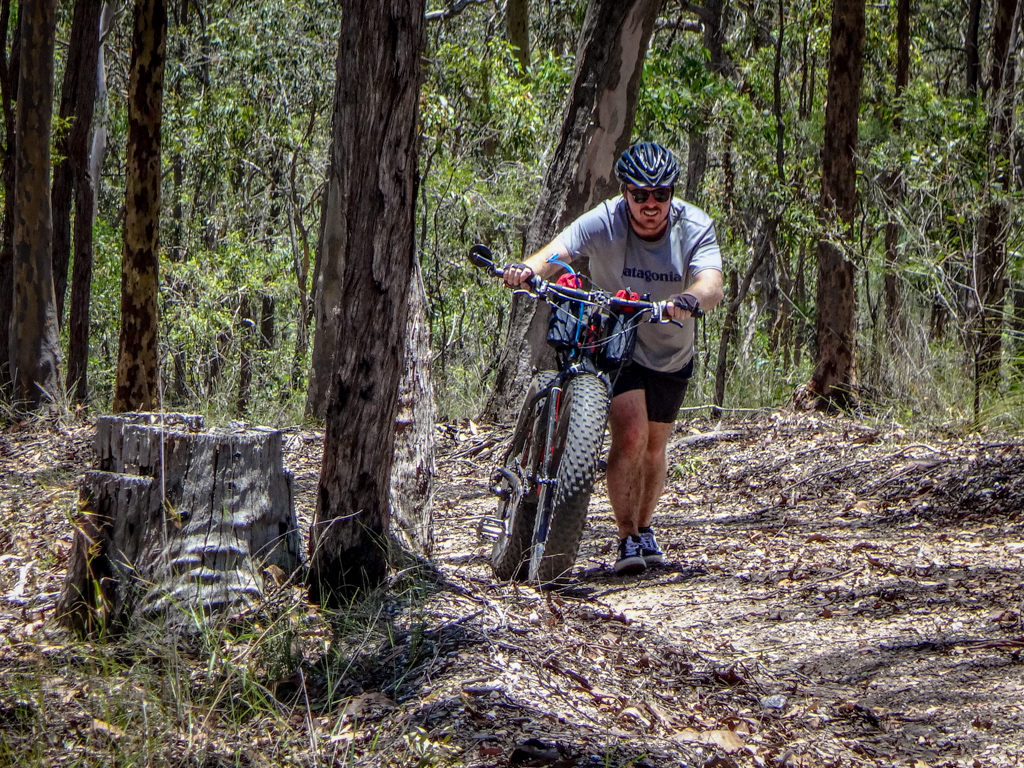 The heat, hills and heavy bike started to slow Luke down.

For a first-timer he’d done well.

It was time to head back. 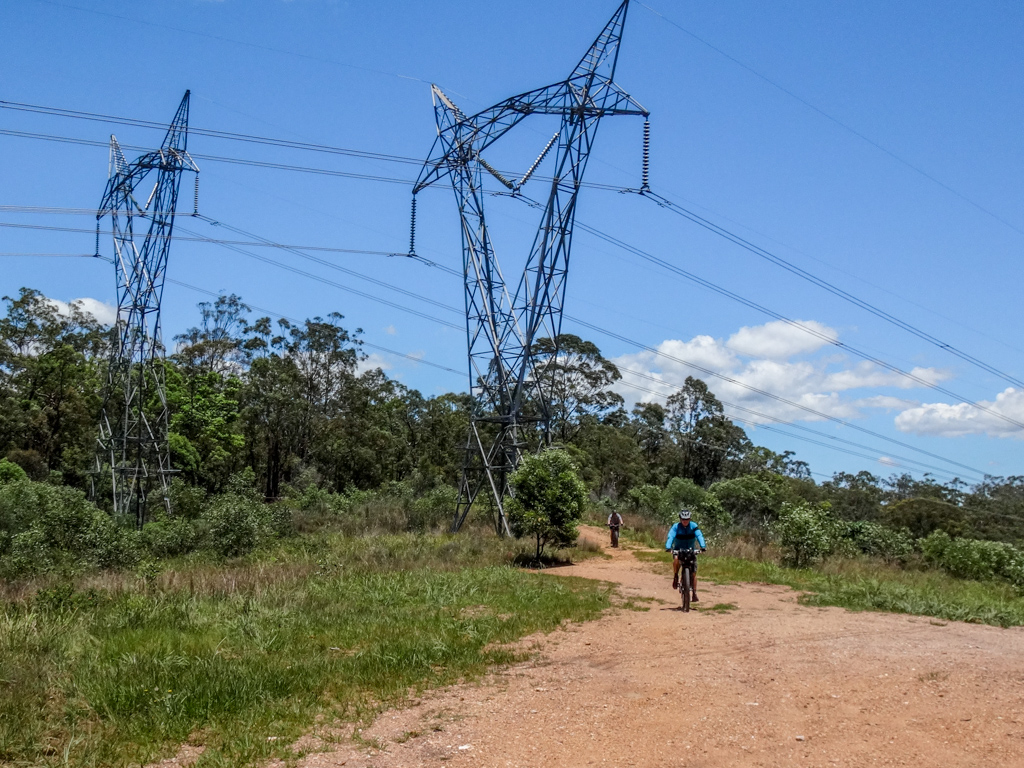 For a ride so close to home, this had been surprisingly challenging.

We rode about fifty kilometres in about four and a half hours.

During that time we climbed 735 metres in elevation and I burned 2,240 kcal.

Thanks Darb, Russel and Luke for a fun ride close to home. 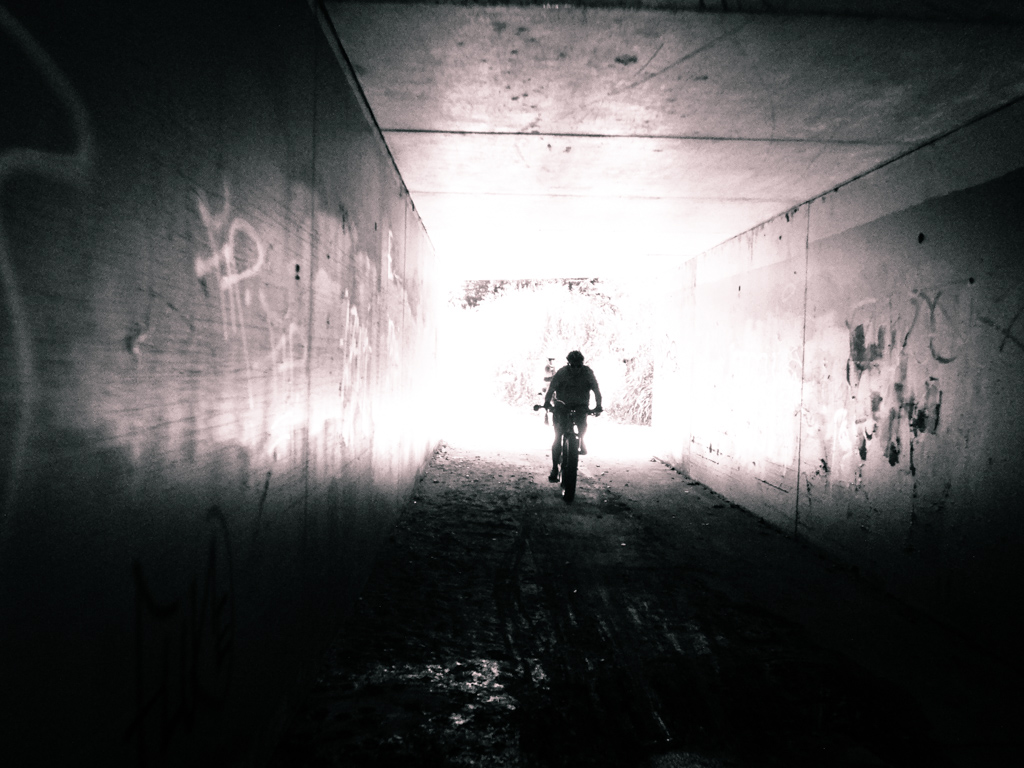 One Reply to “Backyard Beauty”