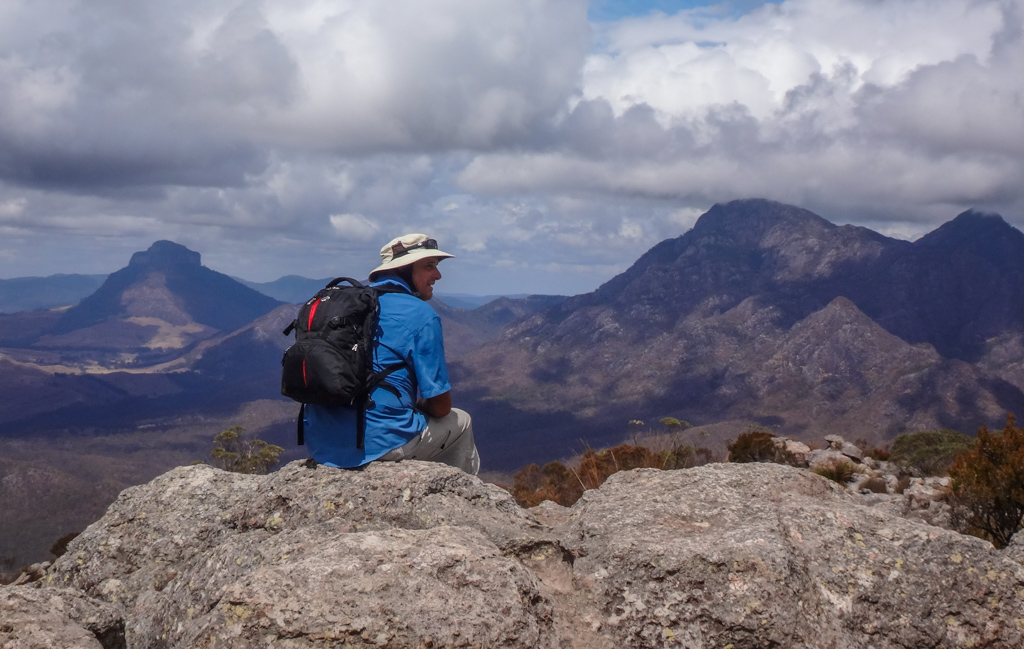 Most of our riding buddies were unavailable for the day, so the rest of us decided to climb a mountain instead. 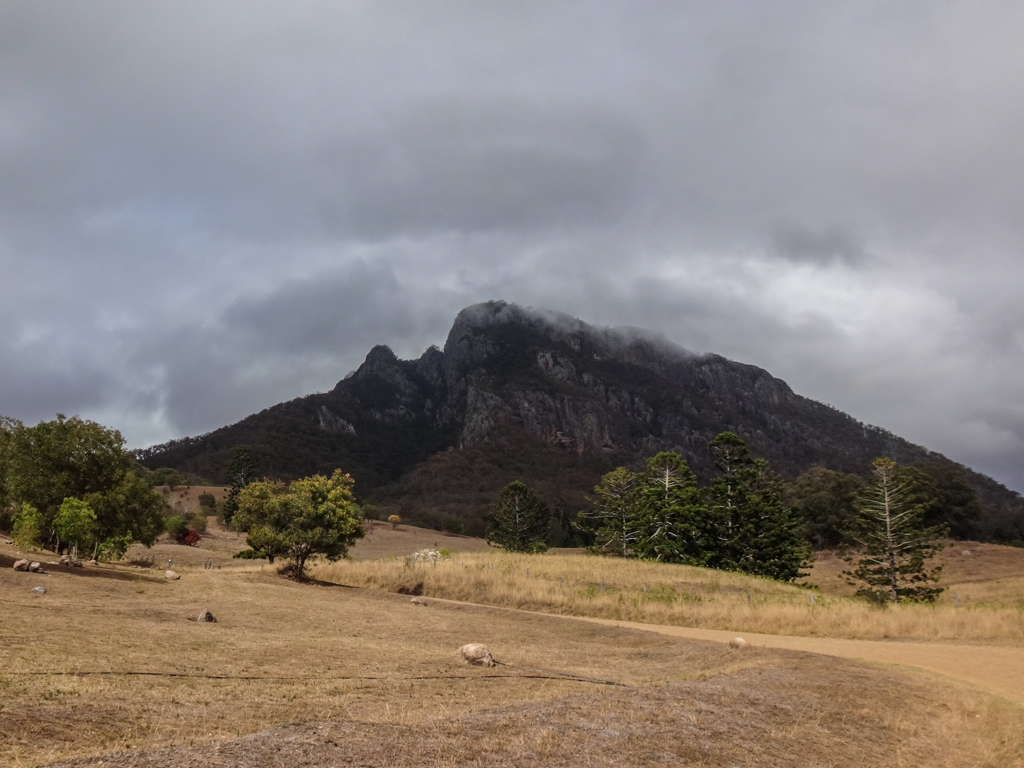 Maroon is just under a thousand metres high.  We’ve ridden near it several times, but today we left the bikes at home, donned hiking boots and decided we’d see what it was like at the top. 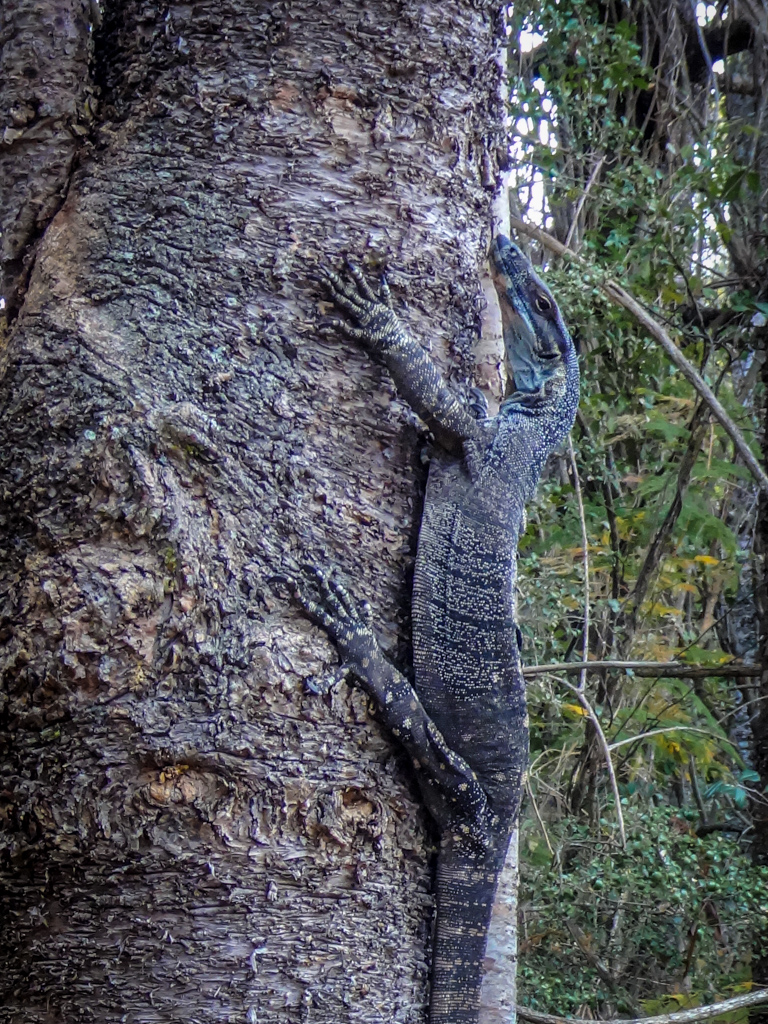 The local Yuggera people called the mountain “Wahlmoorum” which was their name for the lace monitor lizard.  These voracious reptiles will devour anything smaller than themselves.  One fellow checked us out hungrily as we walked past. 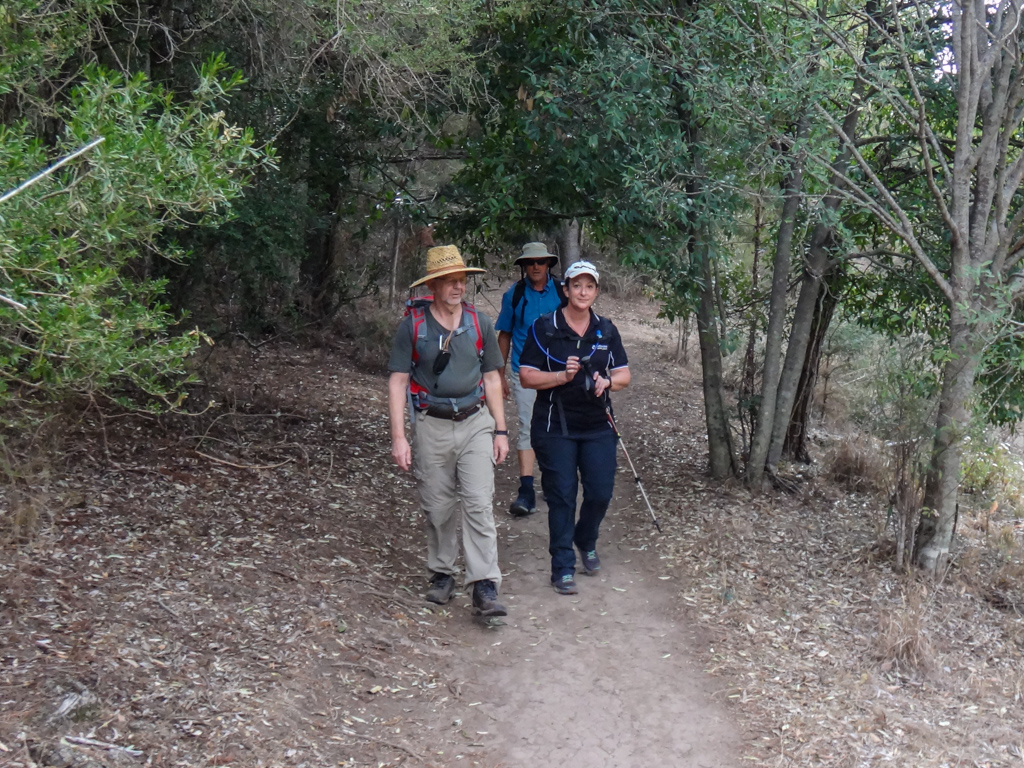 We must not have looked very appetizing.  The hungry lizard let us pass by. 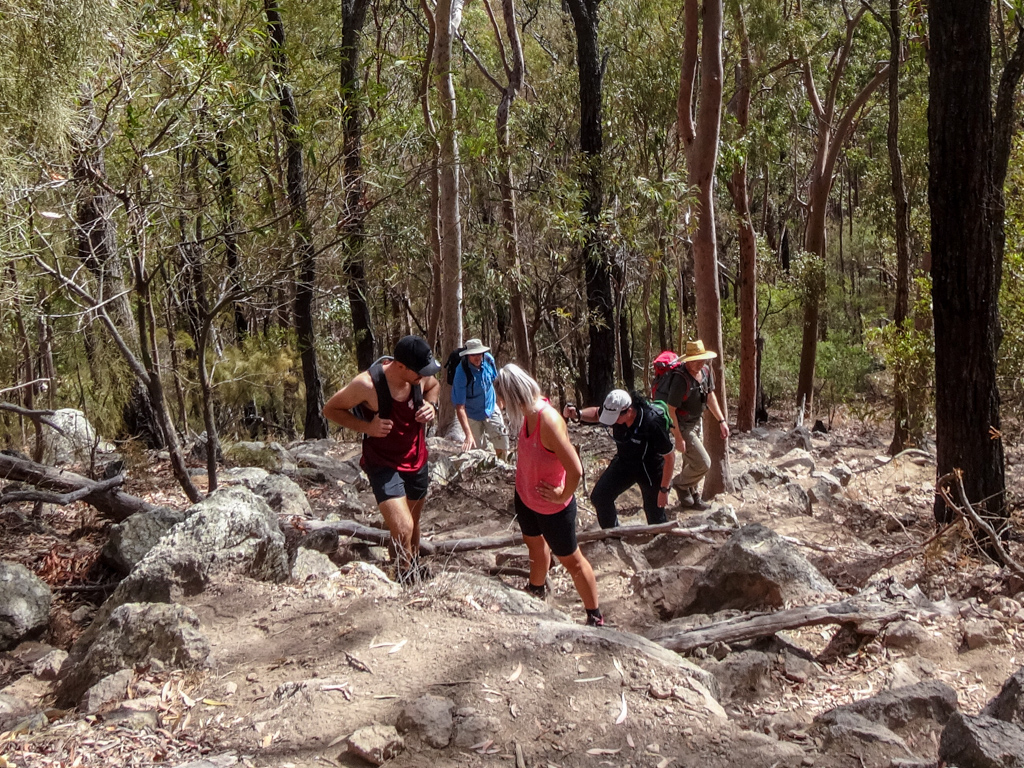 The track quickly became steep.  The forest floor was covered with huge boulders.  We slowly made our way upwards. 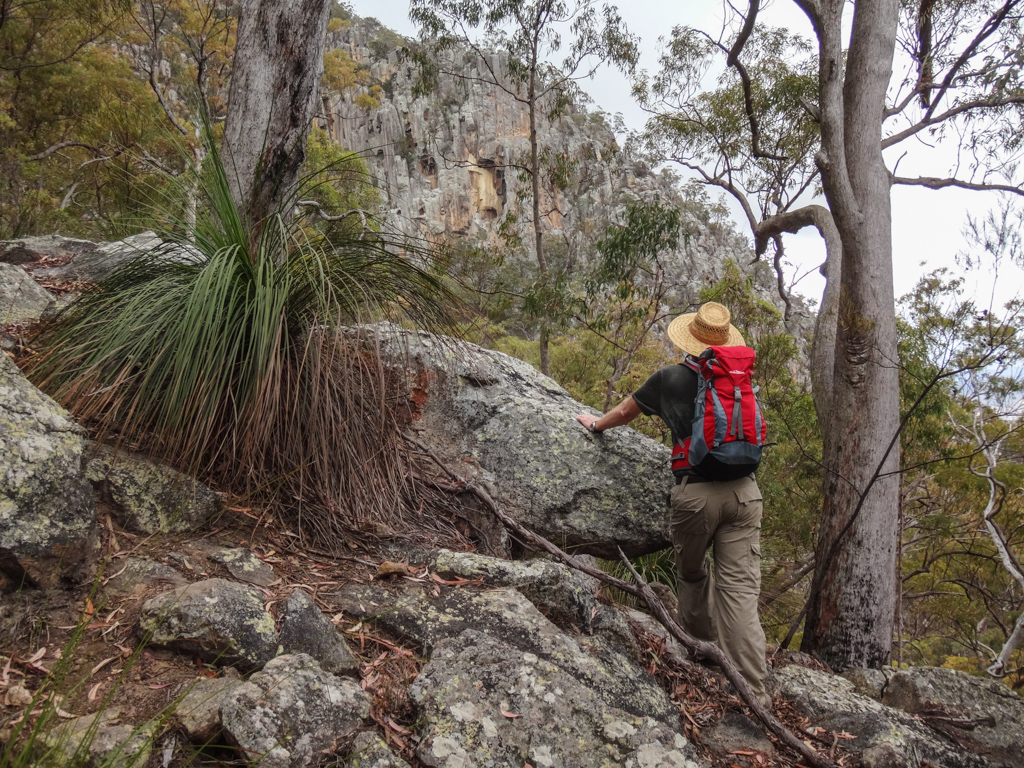 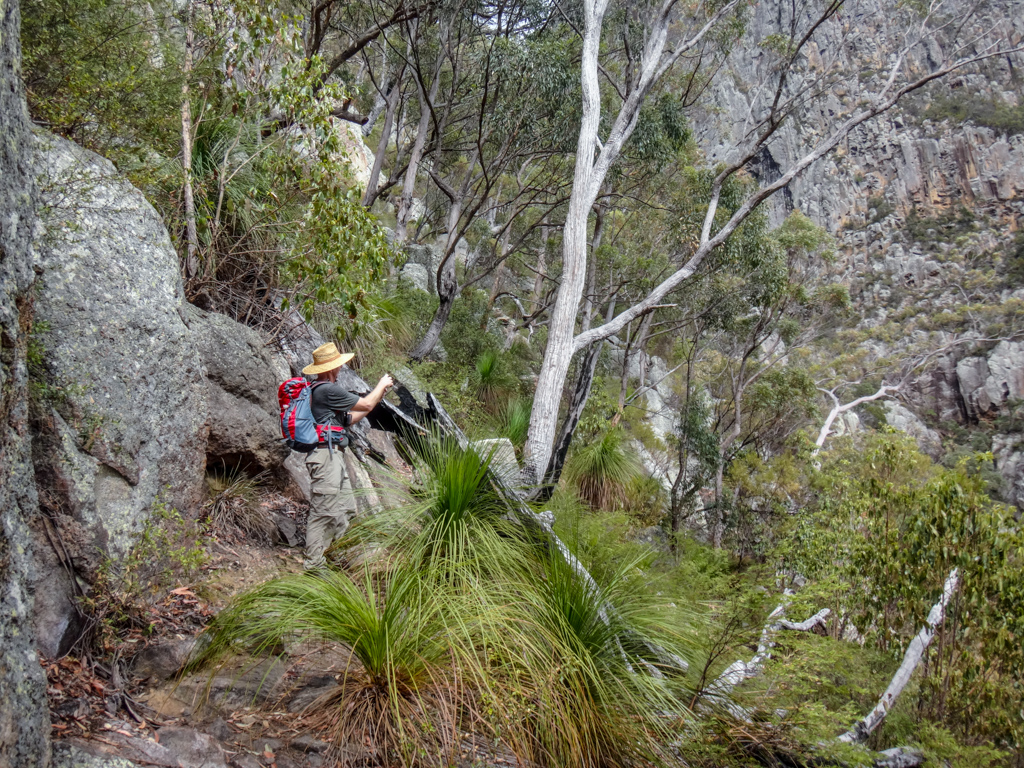 Ahead of us stood the mountain’s sheer northern cliff-face.

We weren’t going to scale it.  Instead we’d be following the “Cottswold Track” up a gentler incline to the east.

Russel has climbed this mountain before.

“I think I remember a strange rock with a hole through the middle of it just up here.”

We took a short detour and there it was. 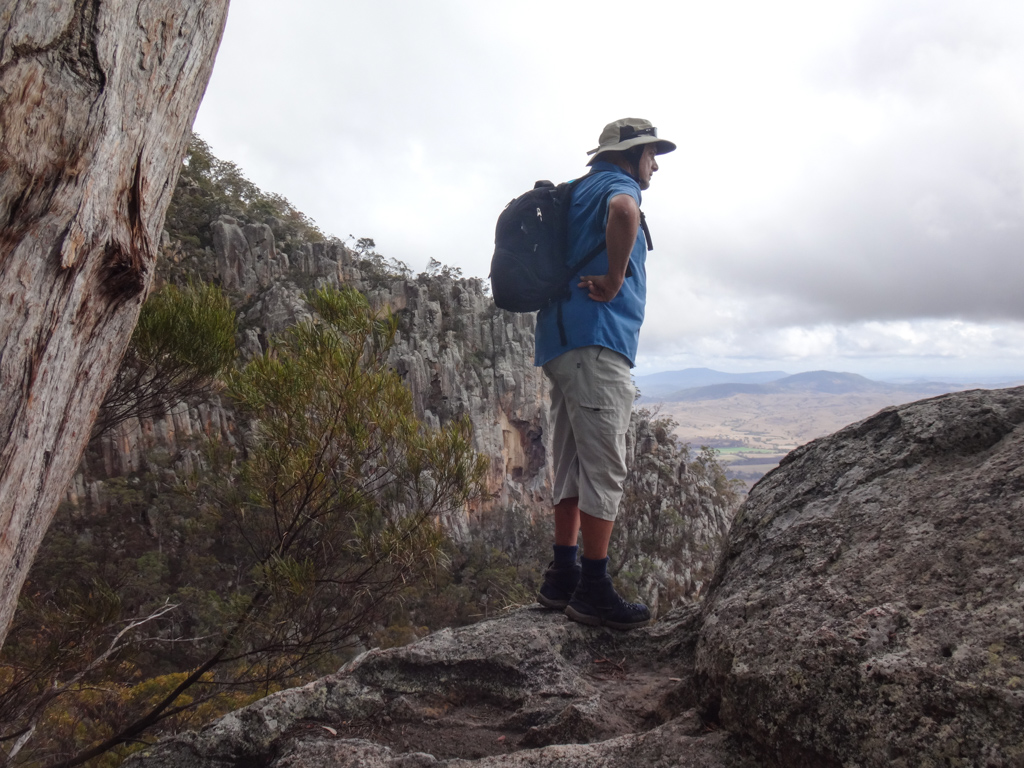 After about half an hour of scrambling, the views behind us started to look impressive.

We paused at a rocky outcrop to survey the landscape to the north of us. 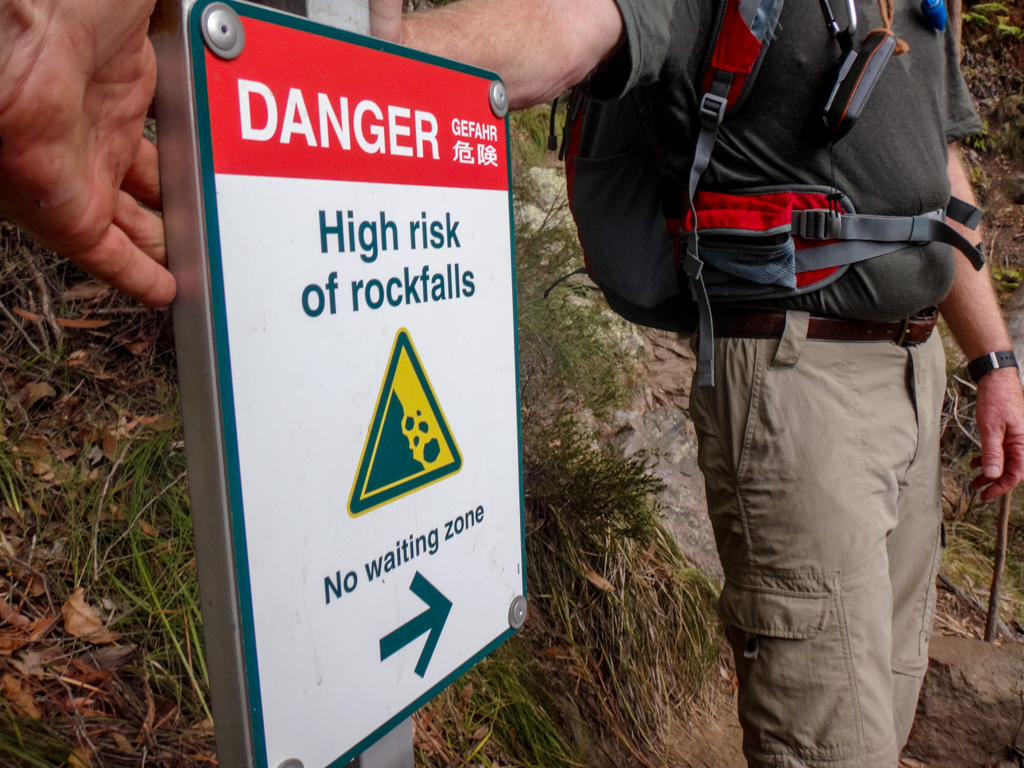 The walking track stopped at the “High Rockfall” warning sign.

We now had to start climbing. 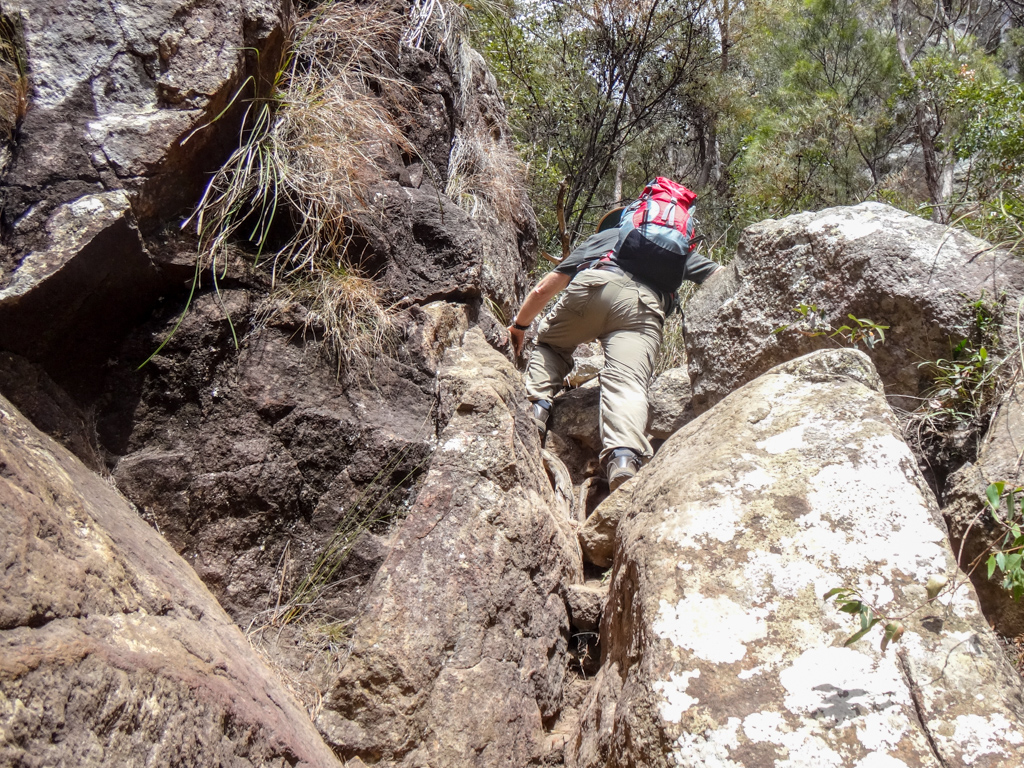 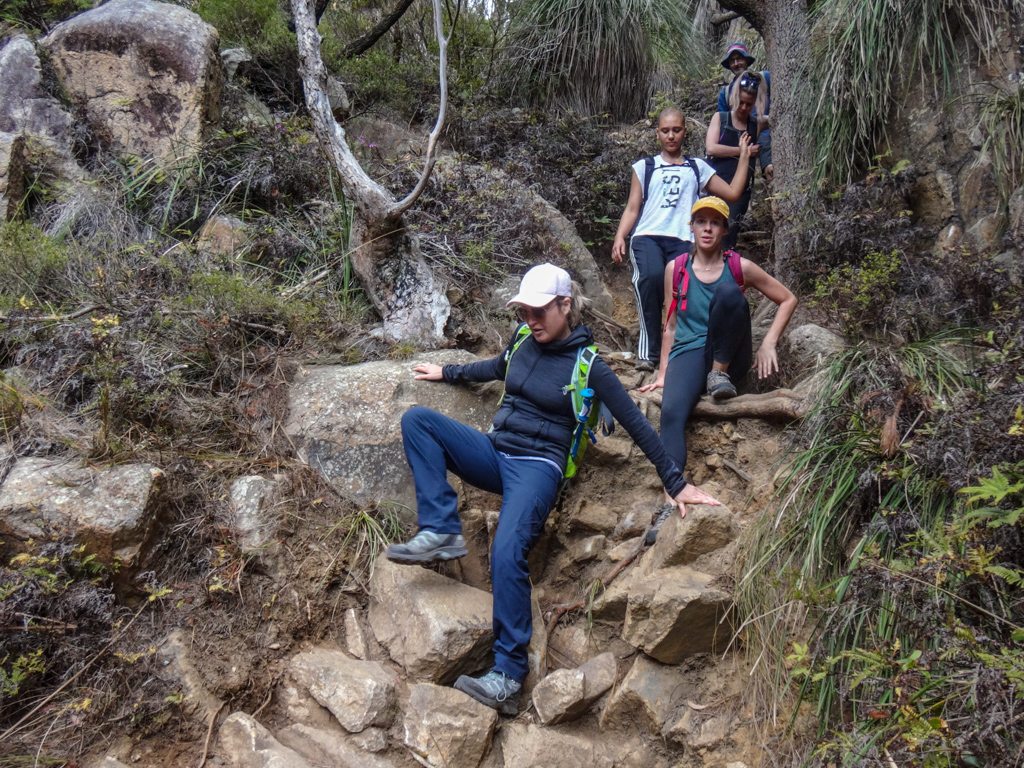 …while others clambered down.

I’m not an experienced rock climber, but I didn’t feel unsafe.

I just took it slowly, one step at a time. 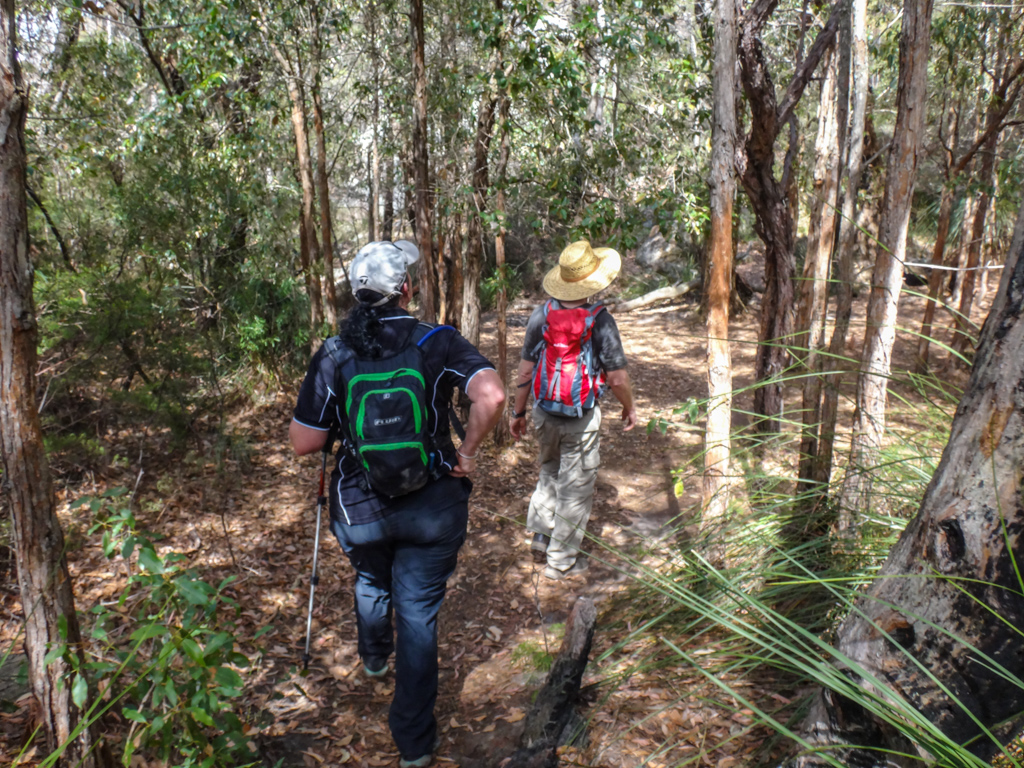 Our skyward scramble ended at a small forest nestled in the saddle between Maroon’s twin peaks. 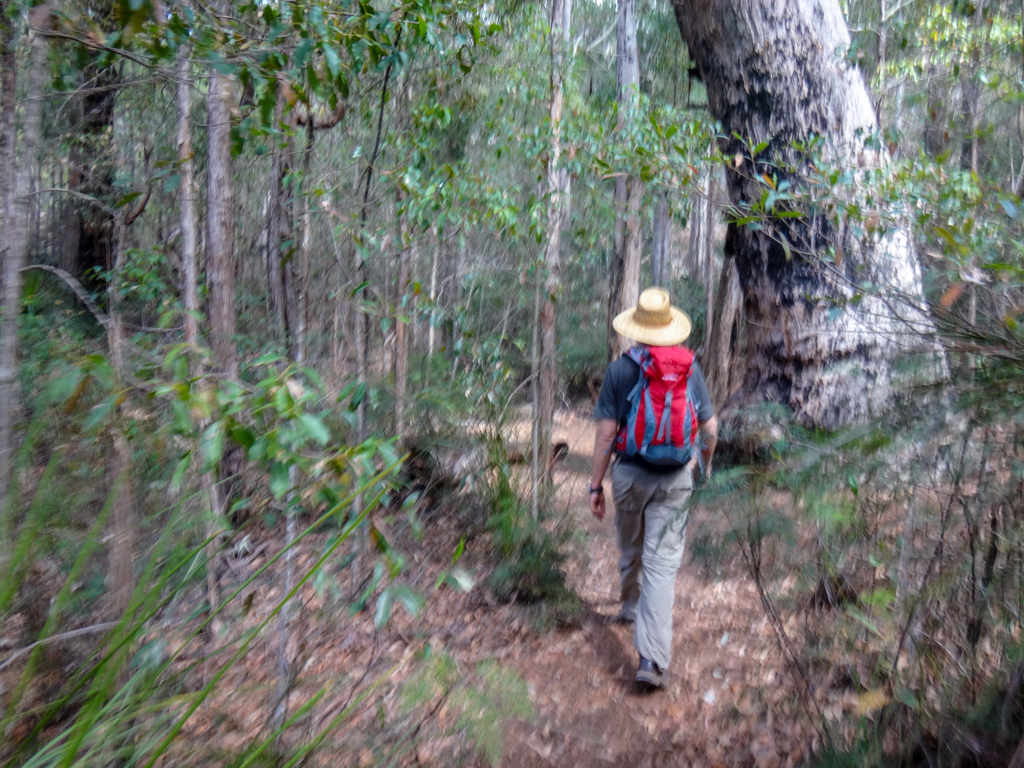 I was surprised at the number of diverse environments on Maroon.  The landscape changed quickly. 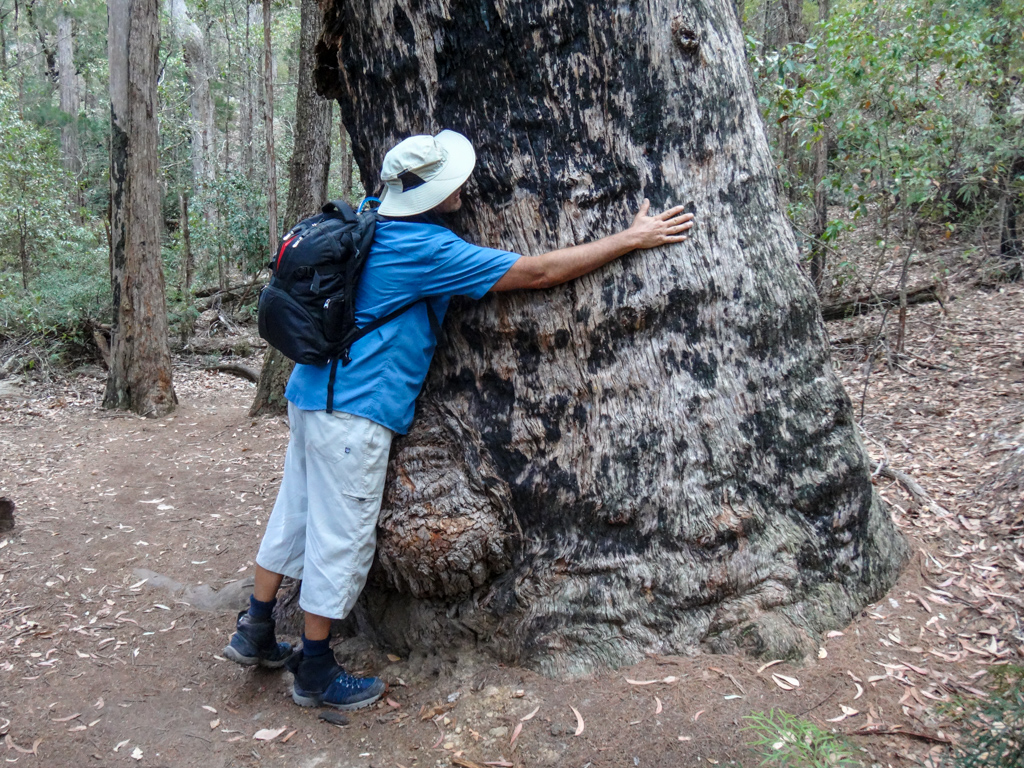 Paul found a tree that he liked, and showed his affection. 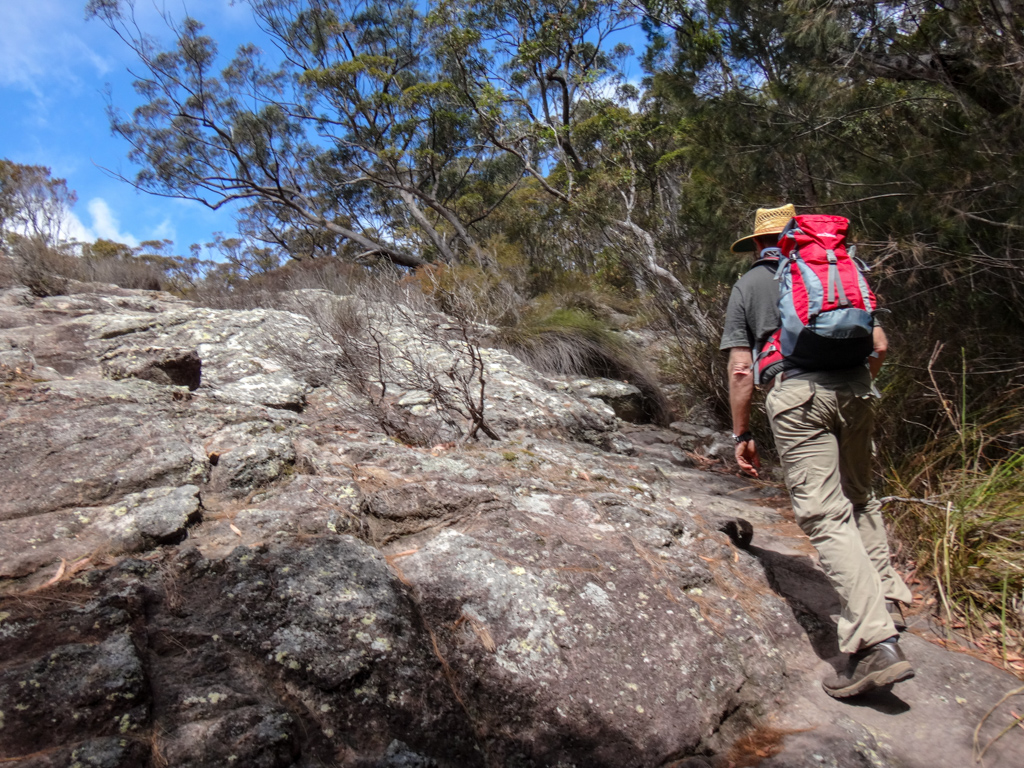 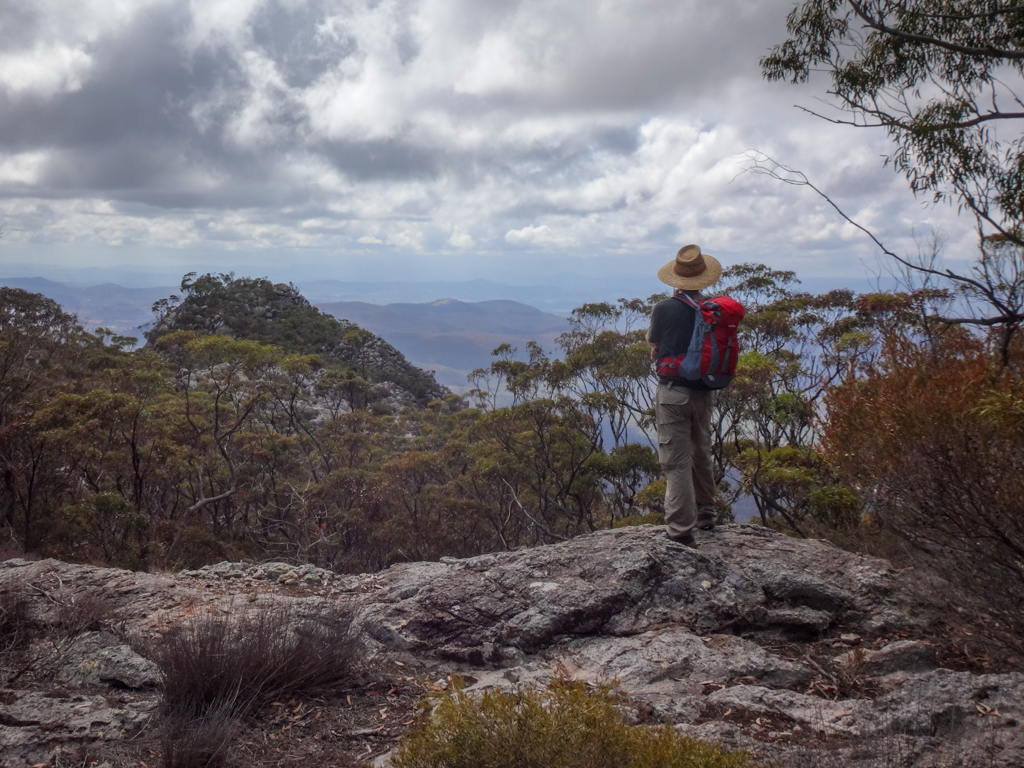 We left the mountaintop forest and followed the rocky pavement up towards the summit. 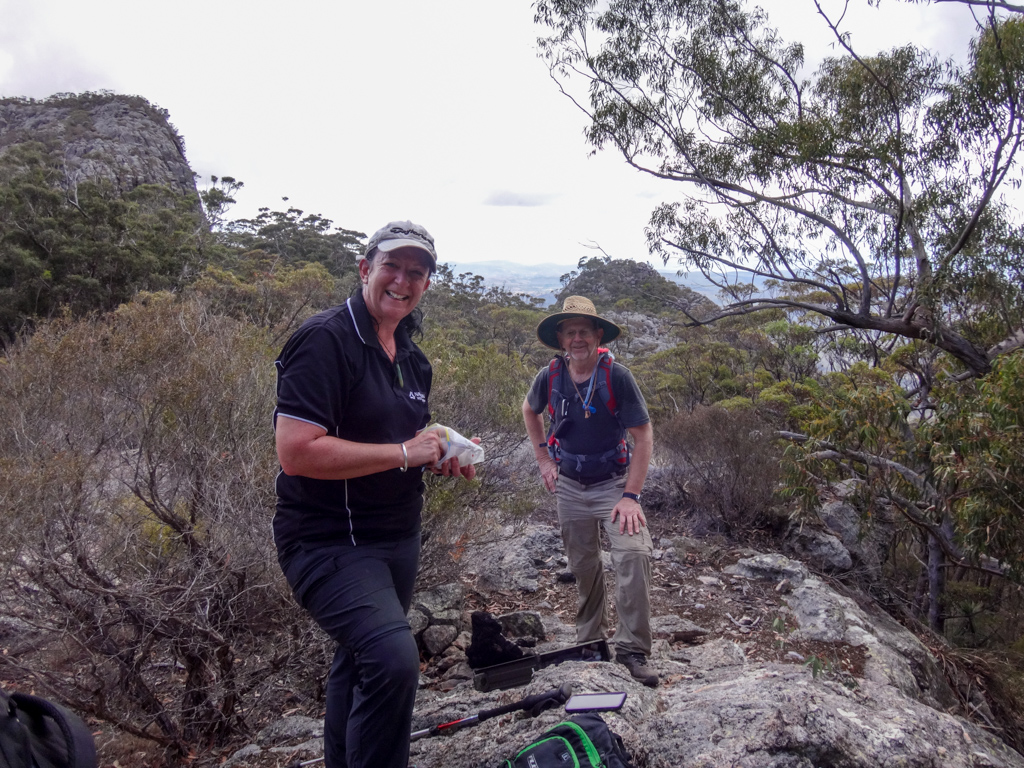 On the way, Caro and I stopped to log a geocache.

…so he admired the amazing views.

We continued the last few metres of the climb. 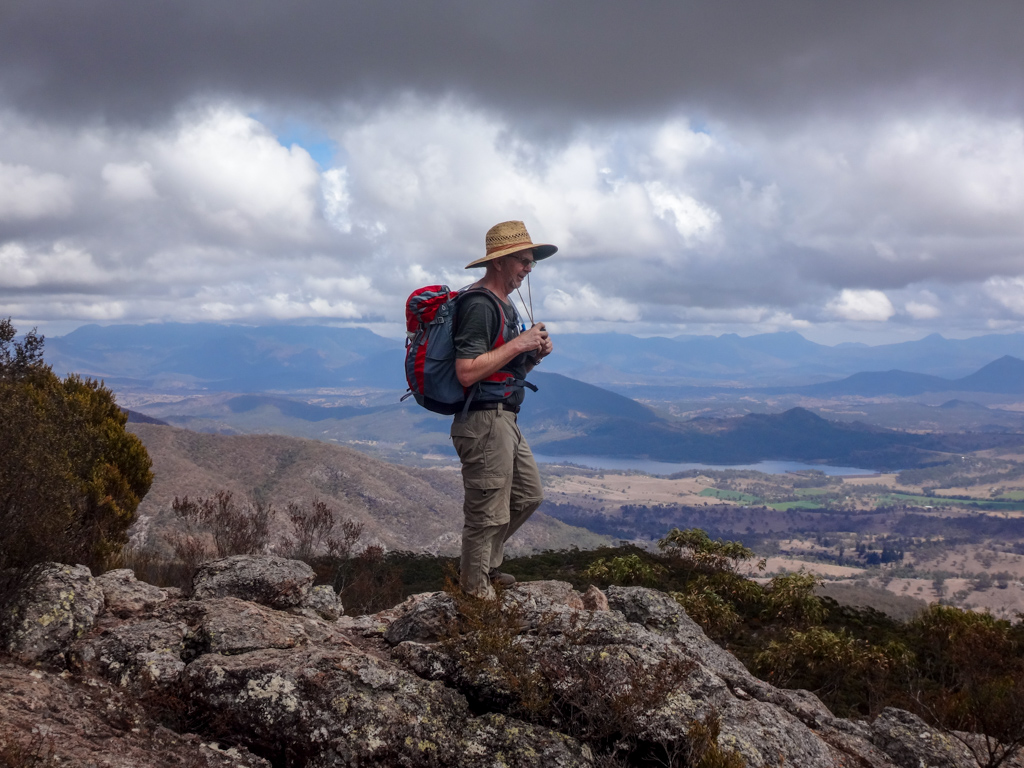 And then we were on top of the world. 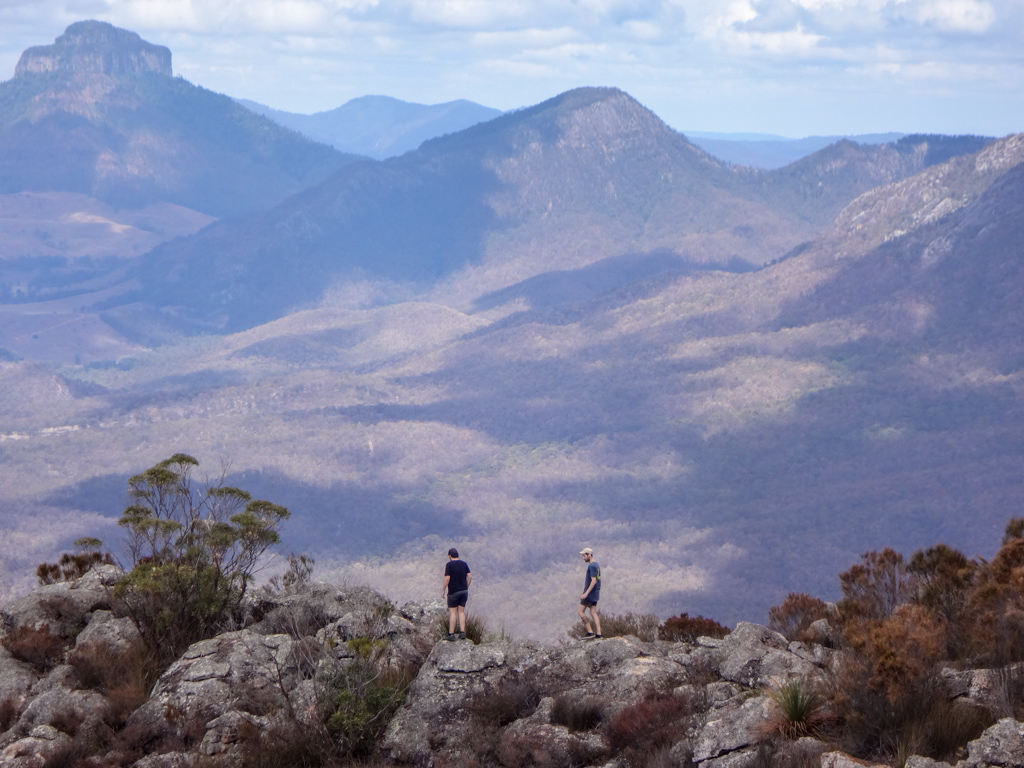 Amazing views fell away beneath us in every direction. 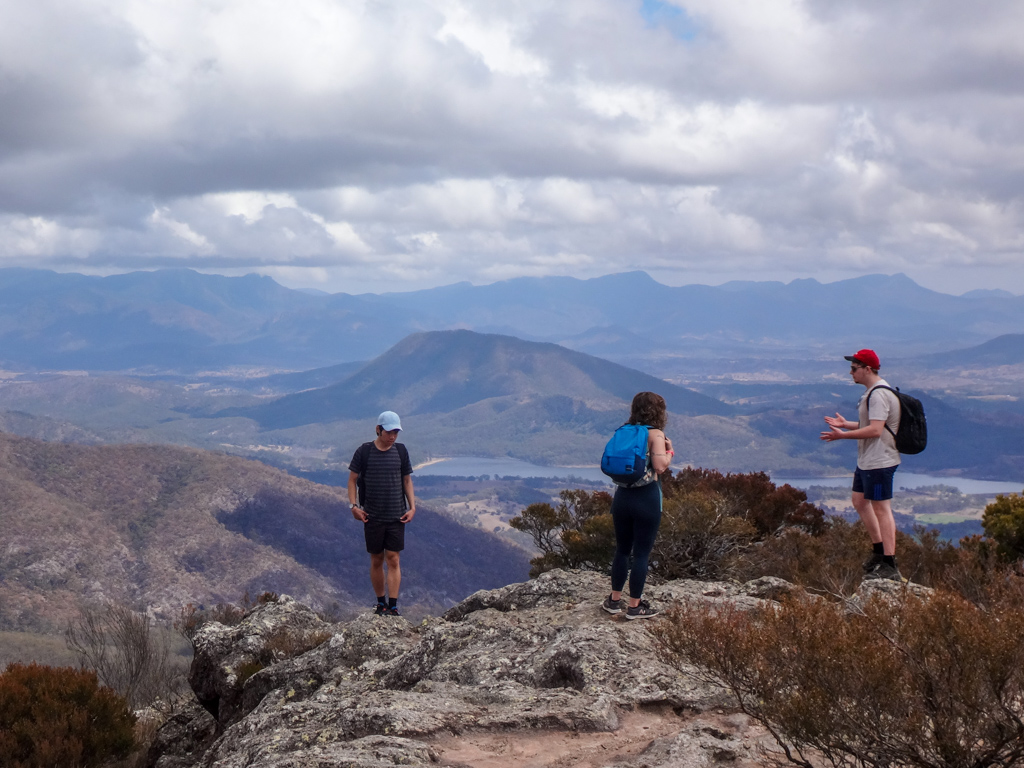 We shared the summit with a few other climbers.

Some of us scurried around like ants on a giant pile of rocks. 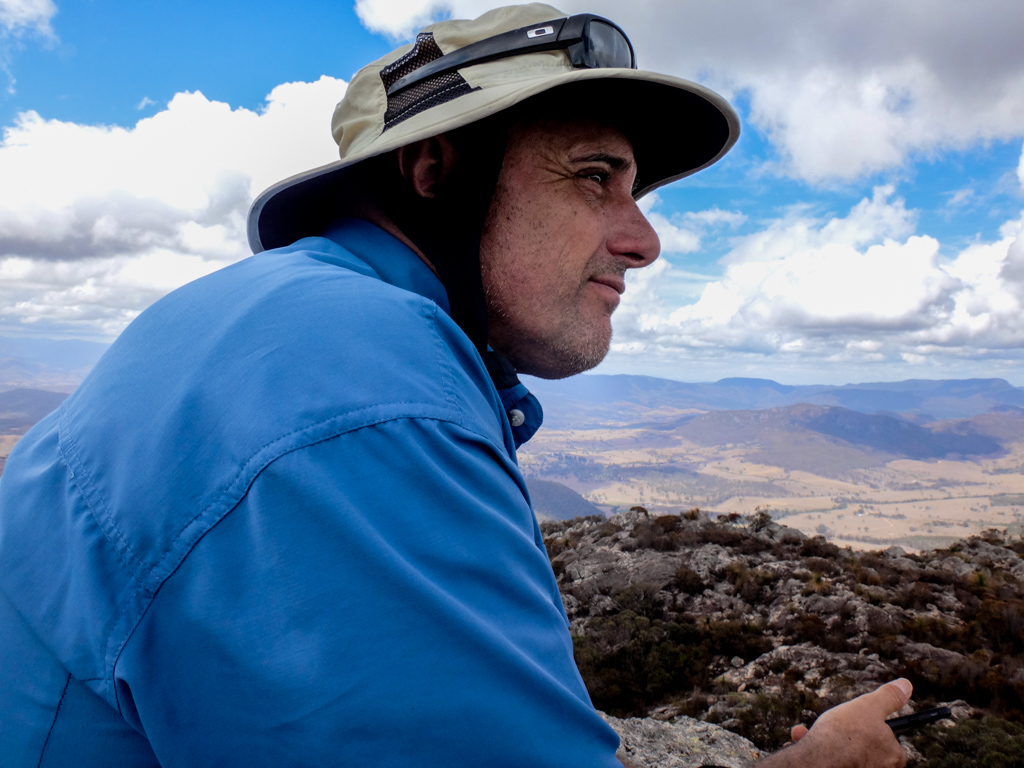 Some of us just sat and absorbed the stunning beauty of the place.

Russel, our walking atlas, named all the peaks he could see.

He’s handy to have around at places like this 🙂

We reluctantly began our long trek back down Mount Maroon.

The morning’s adventure now unfolded in reverse.  We descended… 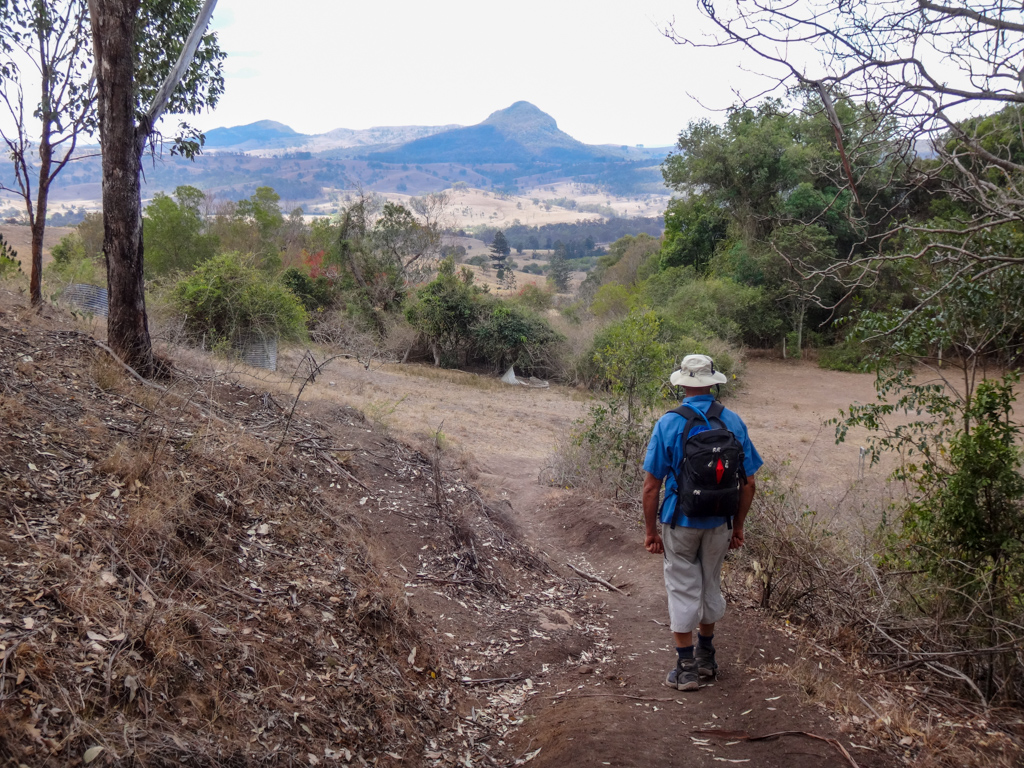 With sore feet and happy hearts we made our way back to the cars.

We walked about eight kilometres in about four hours including breaks.

During that time we climbed about 650 metres in vertical ascent, and I burned about 2,000 kcal.

I’ll rate this hike 7 out of 10 on the tough-o-meter.  It was reasonably easy for someone with moderate fitness.  The only downside was that my legs ached for several days afterwards.

Thanks Russel, Paul and Caro for a fun day out.